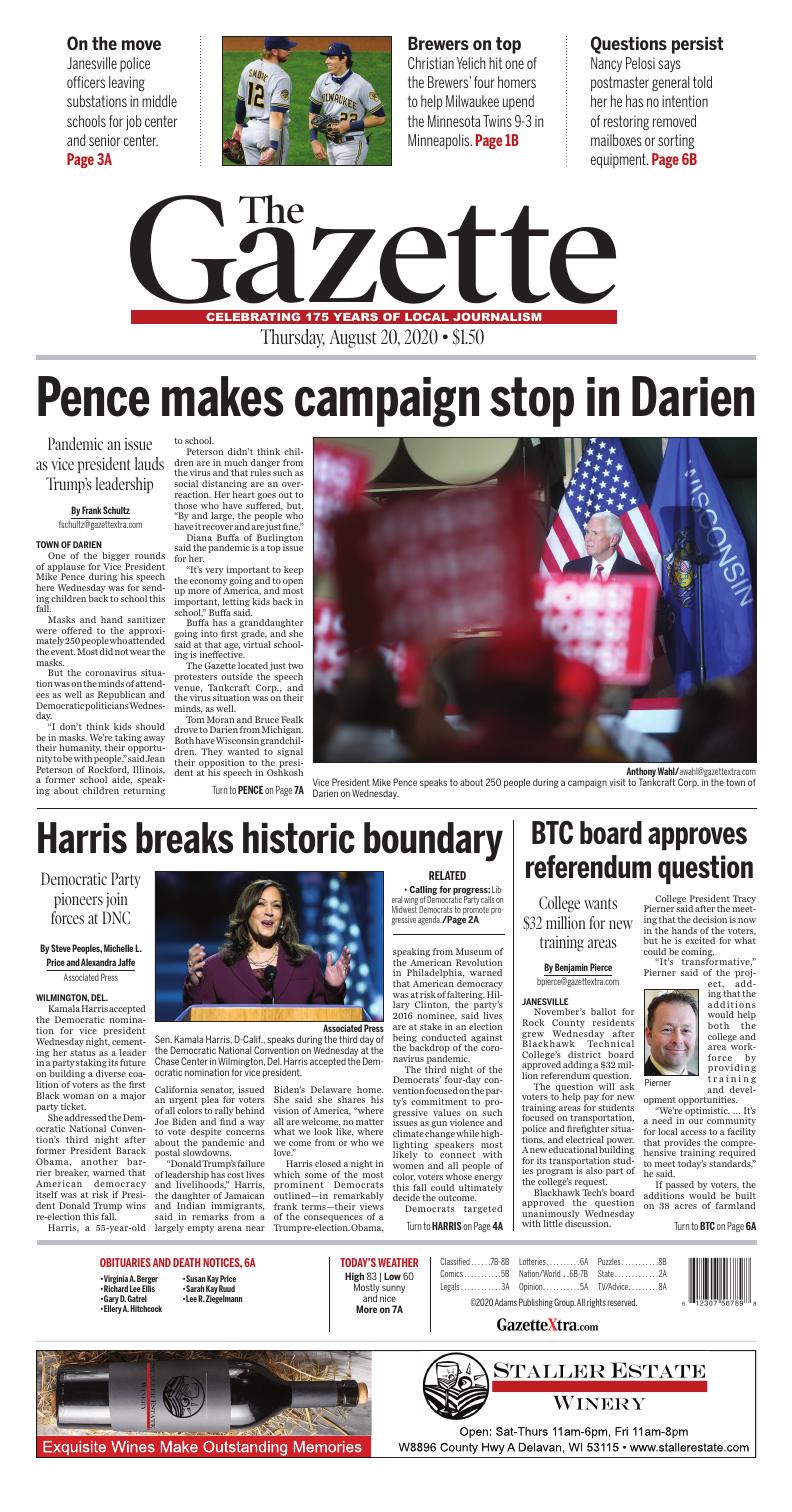 The question will ask voters to help pay for new training areas for students focused on transportation, police and firefighter situations, and electrical power. A new educational building for its transportation studies program is also part of the college’s request.

College President Tracy Pierner said after the meeting that the decision is now in the hands of the voters, but he is excited for what could be coming.

“It’s transformative,” Pierner said of the project, adding that the additions would help both the college and area workforce by providing training and development opportunities.

“We’re optimistic. … It’s a need in our community for local access to a facility that provides the comprehensive training required to meet today’s standards,” he said.

If passed by voters, the additions would be built on 38 acres of farmland the college bought in 2018 north of the central campus at 6004 S. County G, Janesville.

Because the college’s district consists of both Rock and Green counties, the tax burden will be spread among more taxpayers than it would be for school district or city referendums.

According to the college’s numbers, taxes would increase slightly for a few years before decreasing. For every $100,000 of equalized value, a taxpayer currently pays $59 a year to Blackhawk Tech. If passed, the referendum would bump the number to $62 in the first year and stay at $62 in the second year before dropping to $61 in the third year and $60 in the fourth year.

This number would continue to decline in the following years before the debt is paid off in about 20 years. Pierner said this structure would likely allow taxes to return to their starting levels by the fifth year.

Barb Tillman, vice president of the board and a retired chief deputy with the Rock County Sheriff’s Department, said Wednesday that the facilities could make a big difference for local law enforcement and students in multiple programs.

“If we’re fortunate enough to have the referendum pass, I think it will give an opportunity for our local law enforcement agencies in Rock and Green county,” she said.

With a nationwide focus on proper policing procedures, she thinks the facility could help law enforcement students.

“Certainly right now with the focus on law enforcement performance and the need for solid training, I think this couldn’t be at a better time where we would potentially have a facility which would provide us with everything we need to meet requirements and make sure we have well-trained law enforcement staff in our area.”

Tillman said she is glad the proposed facility would be more than just for law enforcement students and would include those in distribution, transportation and emergency response.

Vice President Mike Pence speaks to about 250 people during a campaign visit to Tankcraft Corp. in the town of Darien on Wednesday.

Vice President Mike Pence speaks during a campaign stop at Tankcraft Corp. in the town of Darien on Wednesday. Masks and hand sanitizer were offered to the 250 people who attended, but most did not wear the masks.

Vice President Mike Pence points to someone in the crowd during a campaign stop at Tankcraft Corp. in the Walworth County town of Darien on Wednesday.

Supporters of Vice President Mike Pence listen as he speaks during a visit to Tankcraft Corp. in Darien on Wednesday.

The crowd reacts as Vice President Mike Pence speaks at Tankcraft Corp. in Darien on Wednesday.

Vice President Mike Pence speaks during a campaign stop at Tankcraft Corp. in Darien on Aug. 19. Pence has a visit to Janesville planned for Monday.

One of the bigger rounds of applause for Vice President Mike Pence during his speech here Wednesday was for sending children back to school this fall.

Masks and hand sanitizer were offered to the approximately 250 people who attended the event. Most did not wear the masks.

But the coronavirus situation was on the minds of attendees as well as Republican and Democratic politicians Wednesday.

“I don’t think kids should be in masks. We’re taking away their humanity, their opportunity to be with people,” said Jean Peterson of Rockford, Illinois, a former school aide, speaking about children returning to school.

Peterson didn’t think children are in much danger from the virus and that rules such as social distancing are an overreaction. Her heart goes out to those who have suffered, but, “By and large, the people who have it recover and are just fine.”

Diana Buffa of Burlington said the pandemic is a top issue for her.

“It’s very important to keep the economy going and to open up more of America, and most important, letting kids back in school,” Buffa said.

Buffa has a granddaughter going into first grade, and she said at that age, virtual schooling is ineffective.

The Gazette located just two protesters outside the speech venue, Tankcraft Corp., and the virus situation was on their minds, as well.

Tom Moran and Bruce Fealk drove to Darien from Michigan. Both have Wisconsin grandchildren. They wanted to signal their opposition to the president at his speech in Oshkosh on Monday as well as at Pence’s appearance.

They parked along County K and displayed a “ridin with Biden” flag on the back of their pickup truck.

In the truck bed was a large caricature of President Donald Trump made of papier mache. On the sides were signs noting 168,000 deaths from coronavirus in the United States, a number that has since risen past 170,000, Moran said. 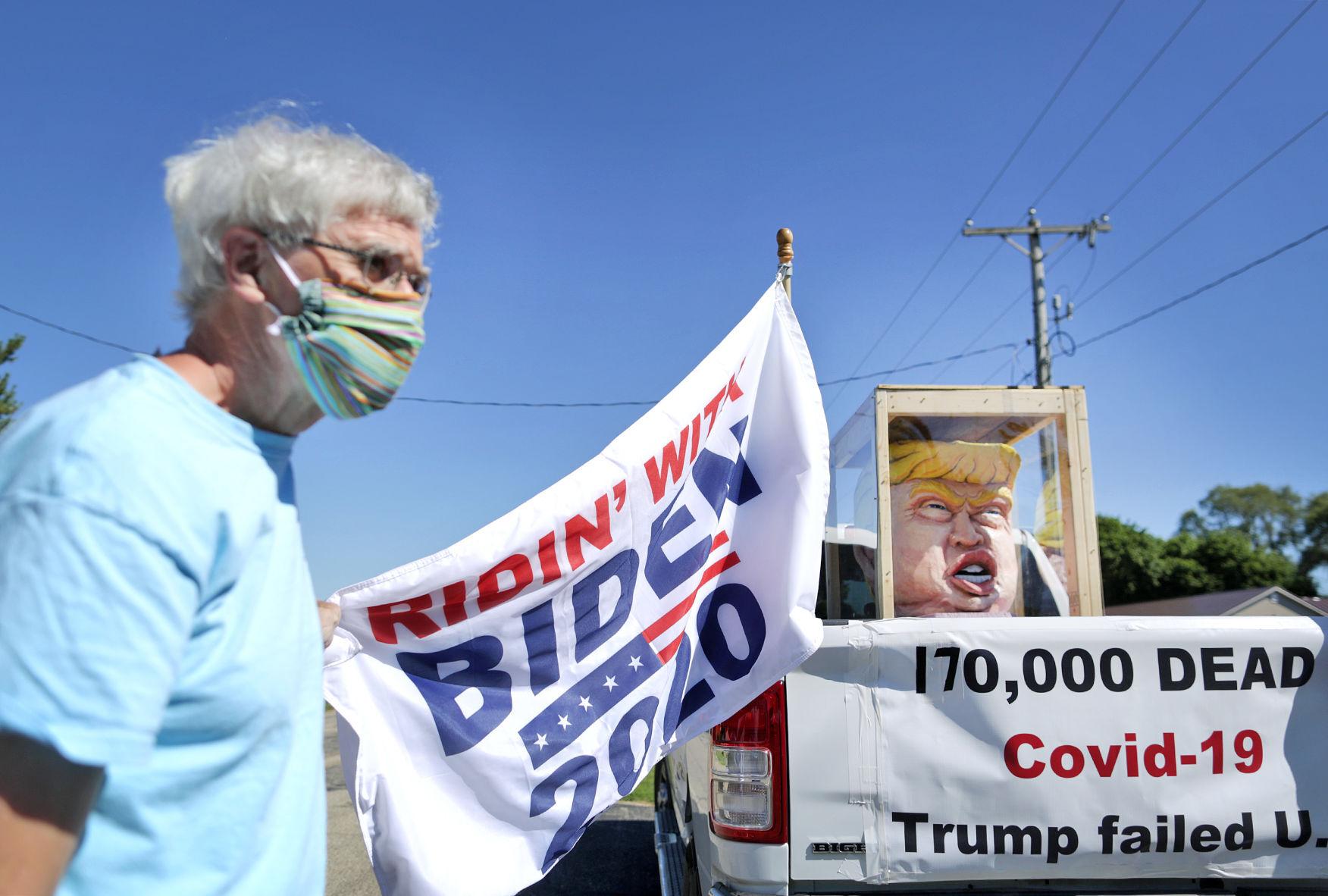 “I’m frustrated and angry, and I wanted to get the message out,” Moran said.

“It’s sad. It didn’t have to be this way,” he said. “All Trump had to do is send a clear and consistent message, and he didn’t.”

“The president is completely incompetent,” said Fealk, adding that the administration’s touting of its economic prowess is “hysterical.”

Pence extolled Trump’s leadership on the pandemic, noting the president halted travel from China and appointed a task force in February.

Pence repeated his prediction of Aug. 4 that the United States would have a coronavirus vaccine by year’s end. He gave no details but said, “That’s what leadership looks like. That’s the leadership of President Donald Trump.”

Pence said the COVID-19 death count exceeds 170,000, and he praised the first responders, doctors, nurses and other health care workers who have fought the disease, calling them heroes.

“COVID-19 cases continue to rise, communities across the state don’t have access to sufficient testing supplies, and health care facilities lack proper protective equipment to keep their essential workers safe,” according to the statement. “As the Democratic National Convention continues, the contrast between Joe Biden and Kamala Harris’ unifying vision for America and Trump and Pence’s failed leadership could not be more stark.”

Pence’s advance team had billed the appearance’s theme as jobs, and Pence talked about a resurgence in American manufacturing and economic growth, but he also made a point about the fact that the Democratic Party, which was supposed to hold its national convention in Milwaukee, convened this week largely online and on TV. 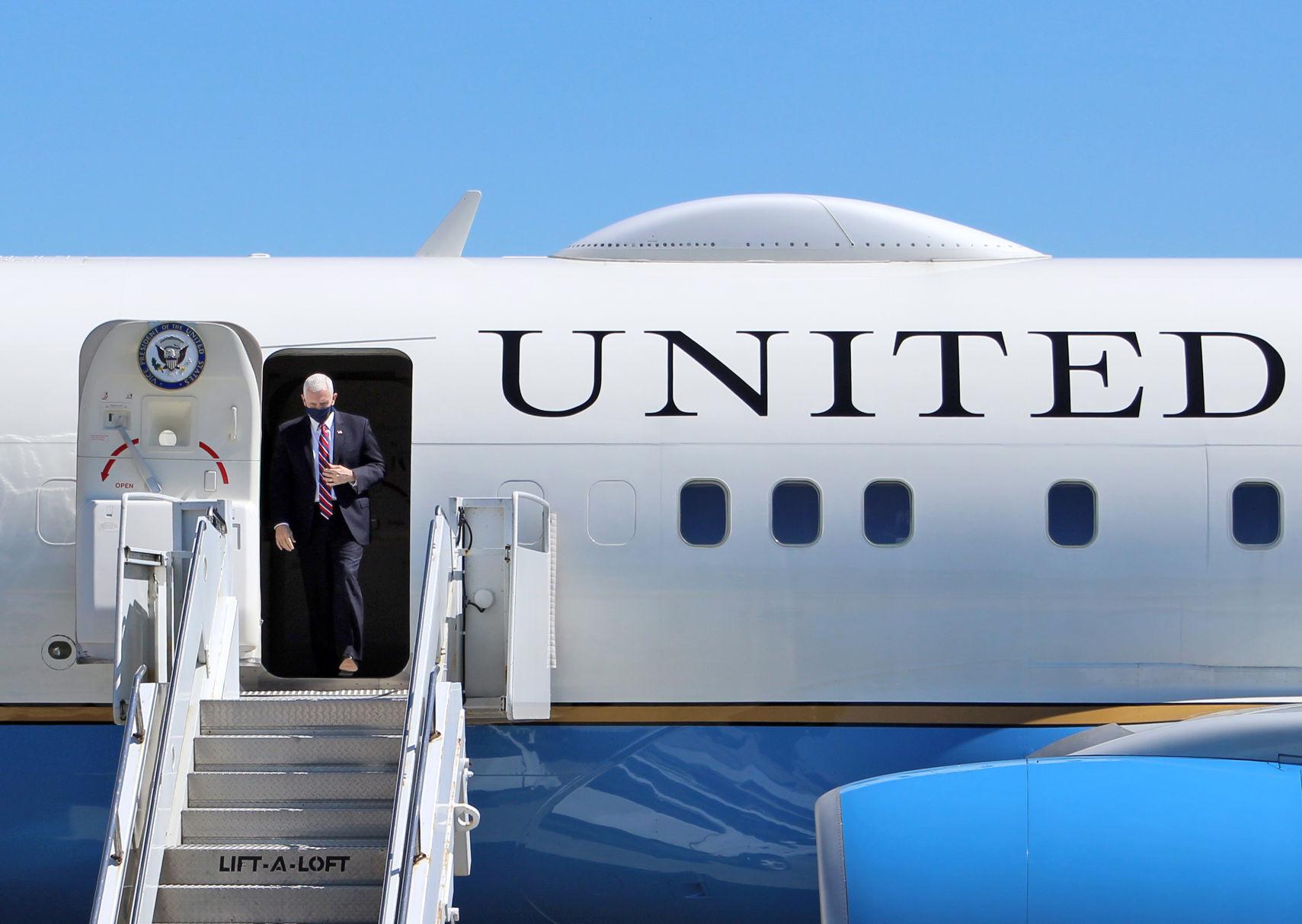 Trump and his son Eric visited Wisconsin on Monday and Tuesday, respectively.

Some have said Hillary Clinton’s lack of Wisconsin appearances in 2016 led to her losing the state by a slim margin.

“Joe Biden and the national Democrats won’t even come to our state for their own national convention,” said Republican 1st District Rep. Bryan Steil, who introduced Pence.

“If I had to guess, they’re going to end their convention in a basement on the East Coast,” Steil said. “But we here in Wisconsin know this to be true: Vice President Mike Pence knows Wisconsin. He is fighting for Wisconsin.”

Pence said Biden hadn’t been in Wisconsin in 659 days, and the last time a Democratic presidential nominee was in Wisconsin was in 2012.

“Well, I gotta tell you, get used to seeing us because President Donald Trump and I are going to be back in Wisconsin again and again and again,” Pence said to rousing cheers.

Notes from the visit: 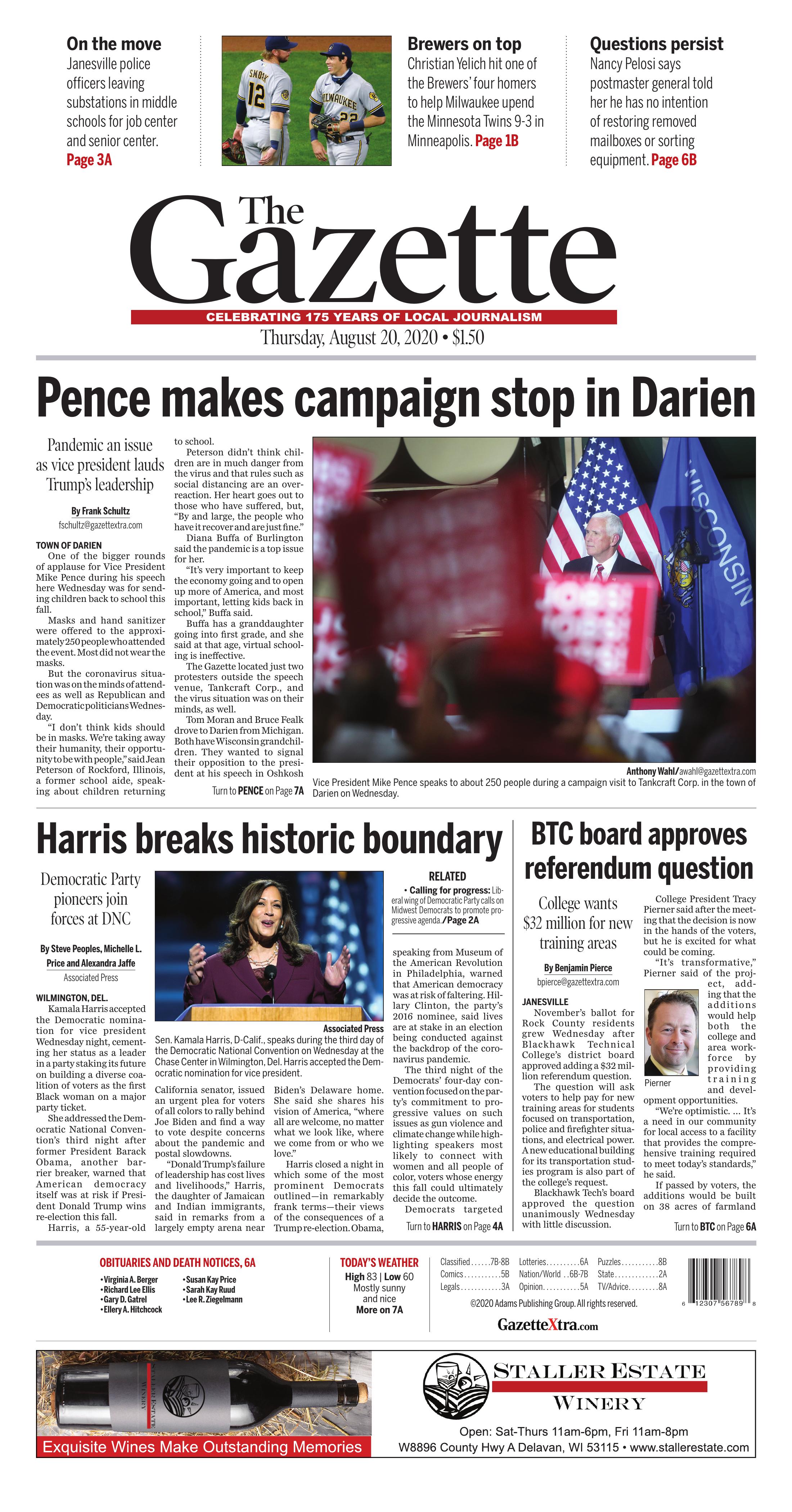