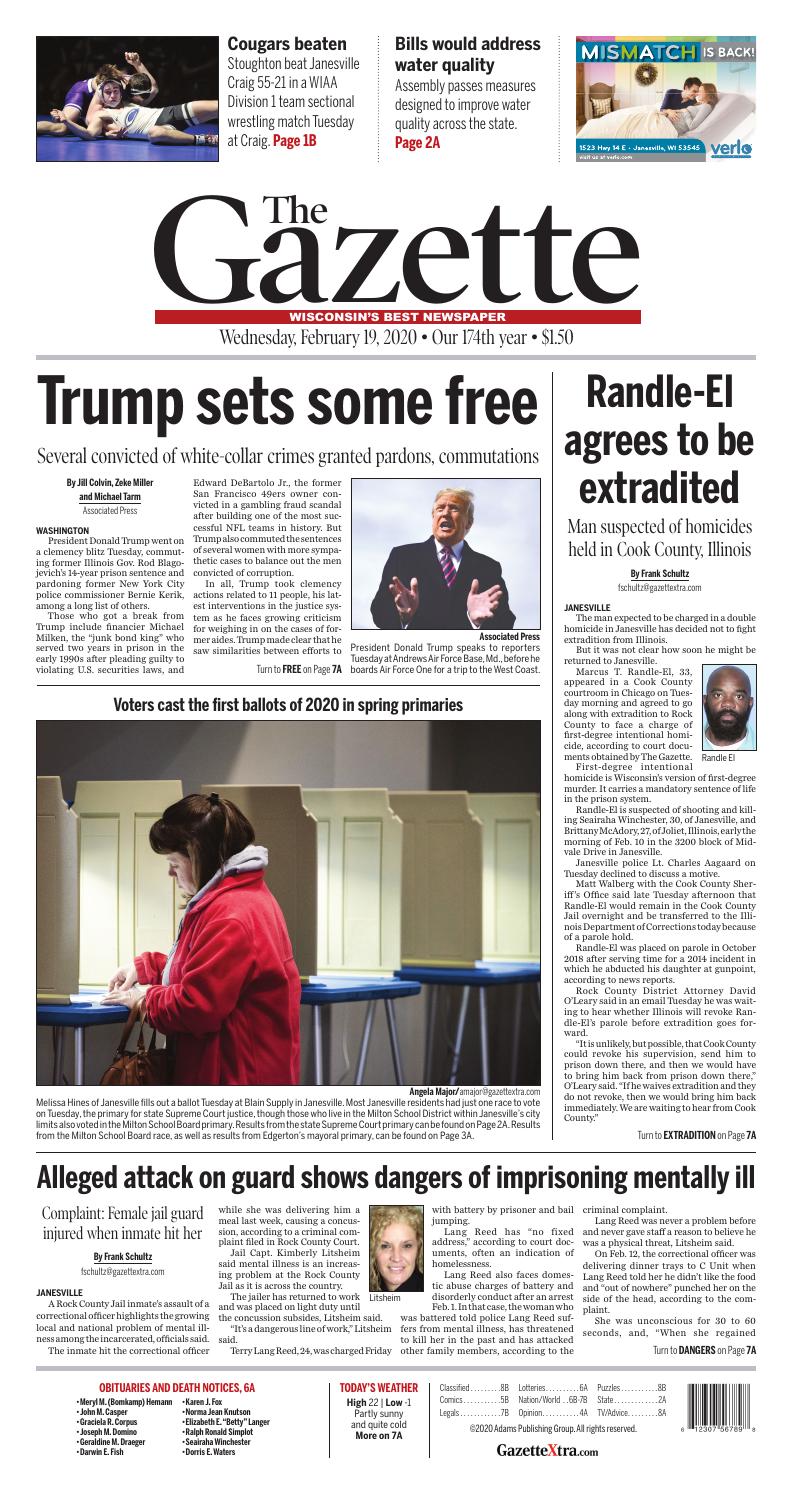 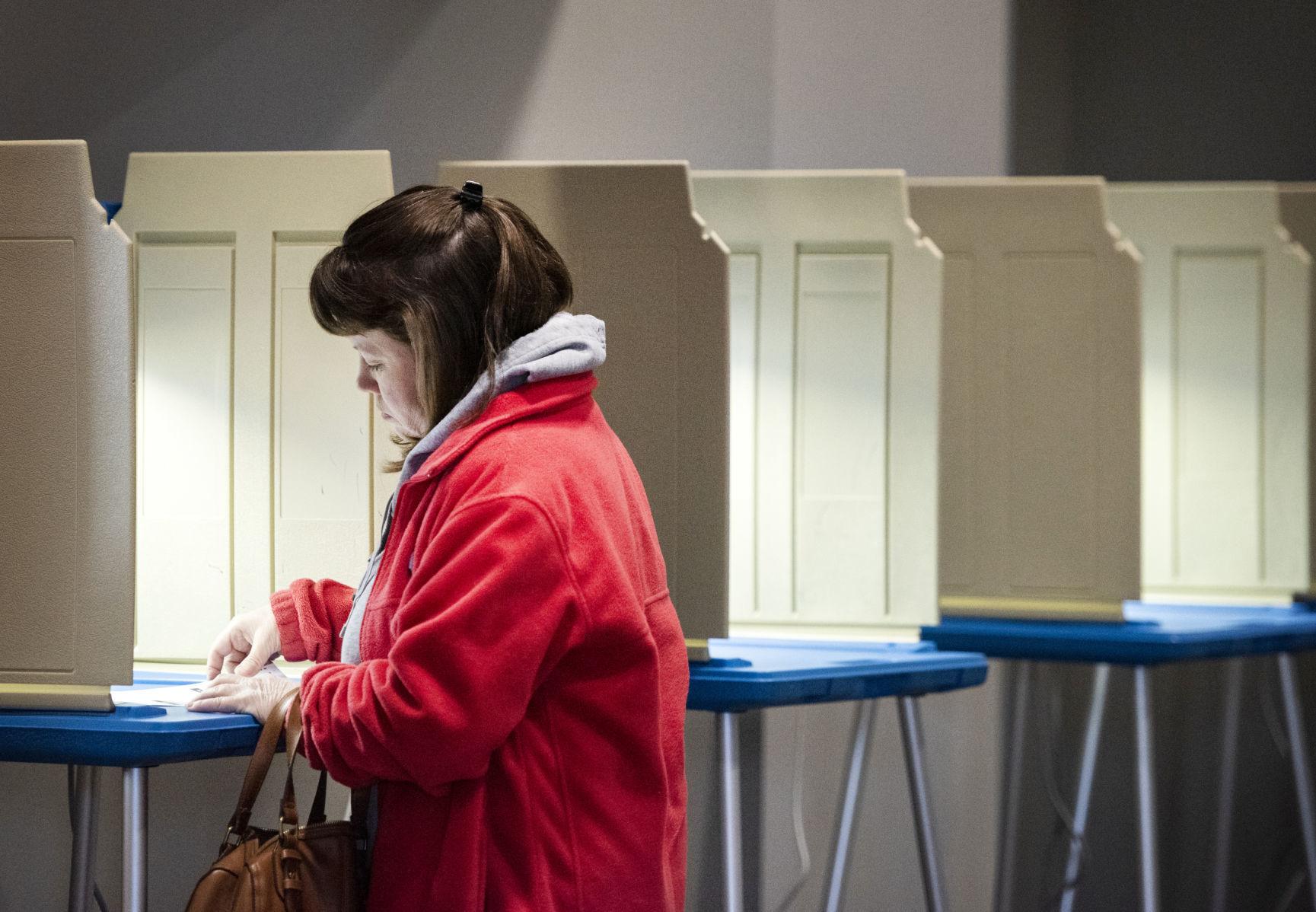 A Rock County Jail inmate’s assault of a correctional officer highlights the growing local and national problem of mental illness among the incarcerated, officials said.

The inmate hit the correctional officer while she was delivering him a meal last week, causing a concussion, according to a criminal complaint filed in Rock County Court.

Jail Capt. Kimberly Litsheim said mental illness is an increasing problem at the Rock County Jail as it is across the country.

The jailer has returned to work and was placed on light duty until the concussion subsides, Litsheim said.

Terry Lang Reed, 24, was charged Friday with battery by prisoner and bail jumping.

Lang Reed has “no fixed address,” according to court documents, often an indication of homelessness.

Lang Reed also faces domestic abuse charges of battery and disorderly conduct after an arrest Feb. 1. In that case, the woman who was battered told police Lang Reed suffers from mental illness, has threatened to kill her in the past and has attacked other family members, according to the criminal complaint.

Lang Reed was never a problem before and never gave staff a reason to believe he was a physical threat, Litsheim said.

On Feb. 12, the correctional officer was delivering dinner trays to C Unit when Lang Reed told her he didn’t like the food and “out of nowhere” punched her on the side of the head, according to the complaint.

She was unconscious for 30 to 60 seconds, and, “When she regained consciousness, another inmate was yelling at her to get out of the section,” the complaint states.

“The defendant stated that he went crazy and came out of his body and punched (the jailer) in the face,” the complaint continues.

“He just lashed out towards her, and she handled it very well,” Litsheim said.

Lang Reed was moved to different unit after the incident. The jailer was treated at a hospital.

“Mental health is one of our biggest problems in here,” Litsheim said, and that has changed how correctional officers go about their business.

“We must be constantly on our toes,” she said.

Cmdr. Erik Chellevold said the jail has had a mental health worker at 28 hours a week since 2016. Those hours were increased to 40 per week in February 2019.

The mental health specialist works for Advanced Correctional Healthcare, which has the contract for medical services at the jail. The position costs the county about $82,000 a year, Chellevold said.

The National Alliance on Mental Illness says nearly 15% of men and 30% of women booked into jails nationwide have serious mental health conditions, but most of them are not violent.

The organization notes that many jail inmates are waiting for their cases to be resolved and have not been convicted of a crime.

“Once in jail, many individuals don’t receive the treatment they need and end up getting worse, not better,” according to the organization’s website. “They stay longer than their counterparts without mental illness. They are at risk of victimization, and often their mental health conditions get worse.”

The organization says a criminal record makes it hard for individuals to get a job or housing, leaving them without access to mental health services and supports, and they can wind up homeless, in emergency rooms and often are re-arrested.

The organization found that at least 83% of jail inmates with a mental illness nationwide did not have access to needed treatment. 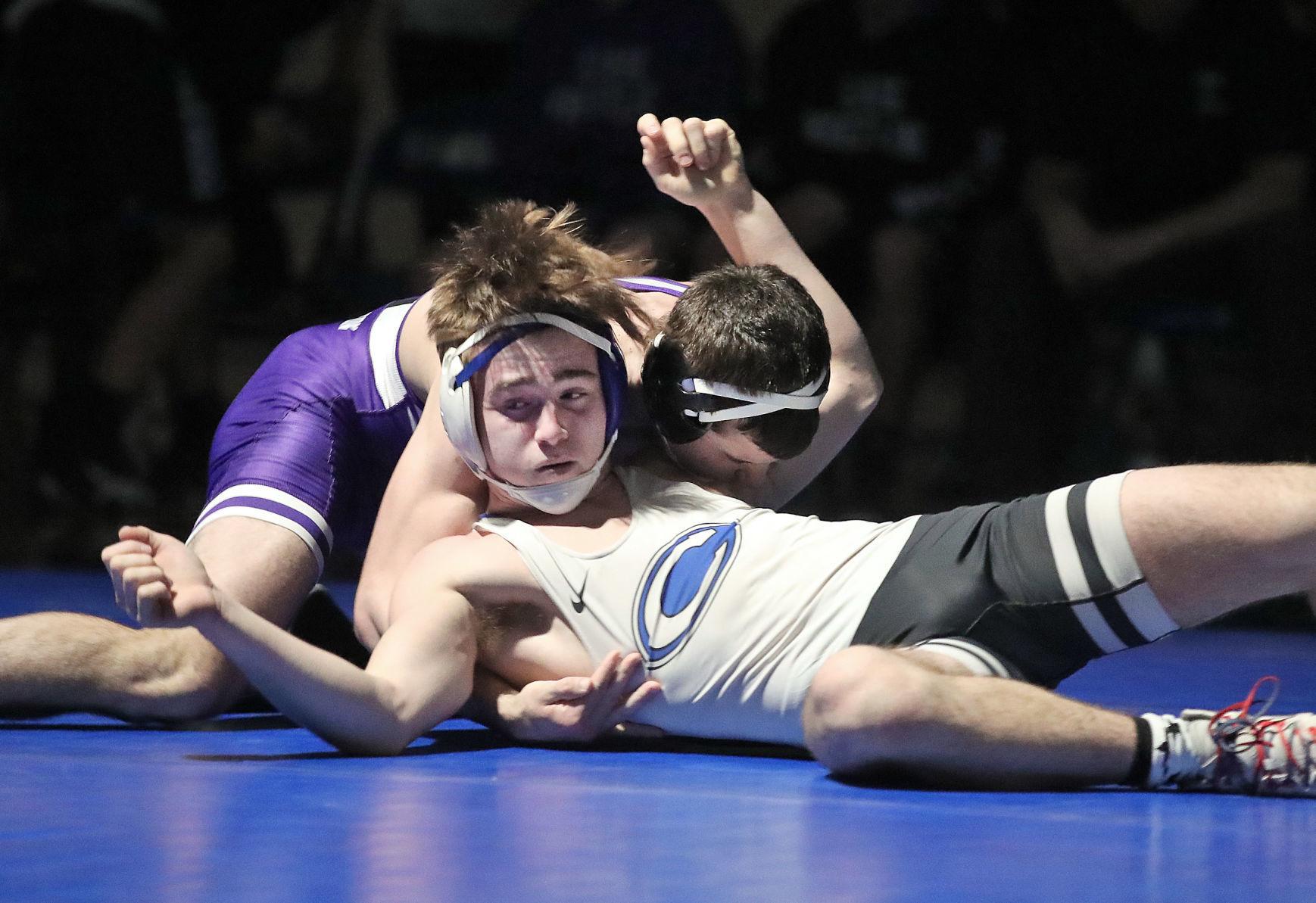 Randle-El agrees to be extradited
By Frank Schultz fschultz@gazettextra.com
02.18.20

The man expected to be charged in a double homicide in Janesville has decided not to fight extradition from Illinois.

But it was not clear how soon he might be returned to Janesville.

Marcus T. Randle-El, 33, appeared in a Cook County courtroom in Chicago on Tuesday morning and agreed to go along with extradition to Rock County to face a charge of first-degree intentional homicide, according to court documents obtained by The Gazette.

First-degree intentional homicide is Wisconsin’s version of first-degree murder. It carries a mandatory sentence of life in the prison system.

Randle-El is suspected of shooting and killing Seairaha Winchester, 30, of Janesville, and Brittany McAdory, 27, of Joliet, Illinois, early the morning of Feb. 10 in the 3200 block of Midvale Drive in Janesville.

Matt Walberg with the Cook County Sheriff’s Office said late Tuesday afternoon that Randle-El would remain in the Cook County Jail overnight and be transferred to the Illinois Department of Corrections today because of a parole hold.

Randle-El was placed on parole in October 2018 after serving time for a 2014 incident in which he abducted his daughter at gunpoint, according to news reports.

Rock County District Attorney David O’Leary said in an email Tuesday he was waiting to hear whether Illinois will revoke Randle-El’s parole before extradition goes forward.

The victims were seen on video at about 2 a.m. Feb. 10 at the TA Express Travel Center truck stop, which is next to the scene of the shootings.

Police believe the women intended to meet Randle-El later that morning, but Aagaard on Tuesday would not say why they planned to meet.

A passerby found the women, both suffering from multiple gunshot wounds, at about 3:15 a.m. and called 911, police said.

Aagaard has said Randle-El, Winchester and McAdory knew each other but weren’t friends.

Police believe Randle-El drove McAdory’s black Jeep Cherokee from the scene and traveled to Illinois. State police found it abandoned along Interstate 294 in Justice, Illinois, just west of Chicago. Police earlier had said the Jeep was found on I-90 at Hoffman Estates, Illinois.

Randle-El arranged through his lawyer to turn himself in to Chicago police on Saturday, and Janesville police were given enough notice to be able to be there when he did so, Aagaard said.

Randle-El declined to talk to the Janesville officers, Aagaard said.

An arrest report states a Chicago police fugitive-apprehension unit and FBI task force “had contact with” Randle-El’s attorney, leading to Randle-El giving himself up.

Brandon Brown, listed as attorney for Randle-El on Illinois court documents, declined to comment Tuesday when contacted by The Gazette.

Aagaard said Tuesday that investigators have no information about anyone else being involved in the homicides, but he noted the investigation is continuing.

Randle-El lived in Homewood, Illinois, police believe, but he periodically stayed in Janesville. Aagaard would not say where in Janesville.

“At this point, they are asking we get them everything we have, and that’s what we’re doing,” he said. 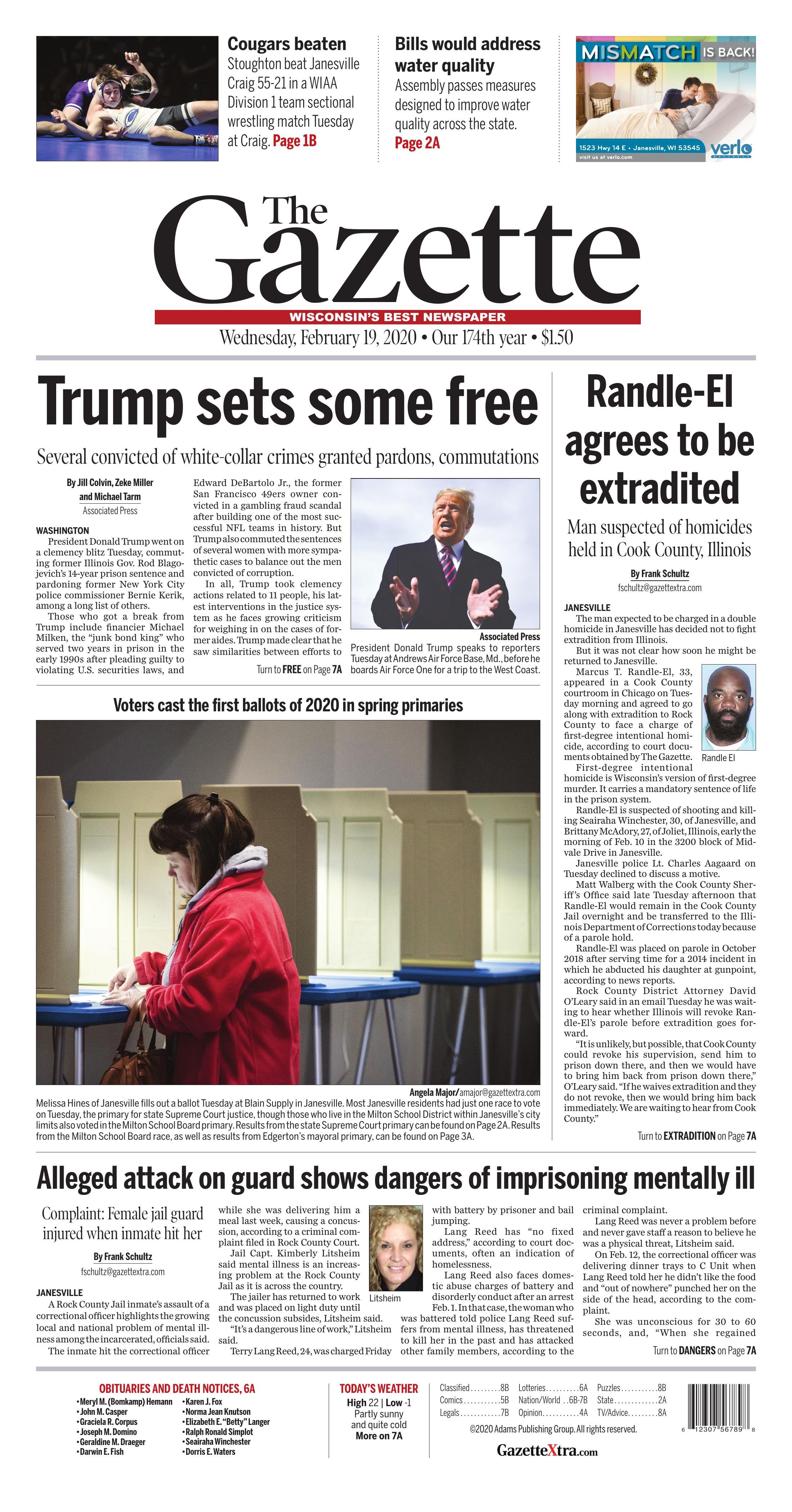