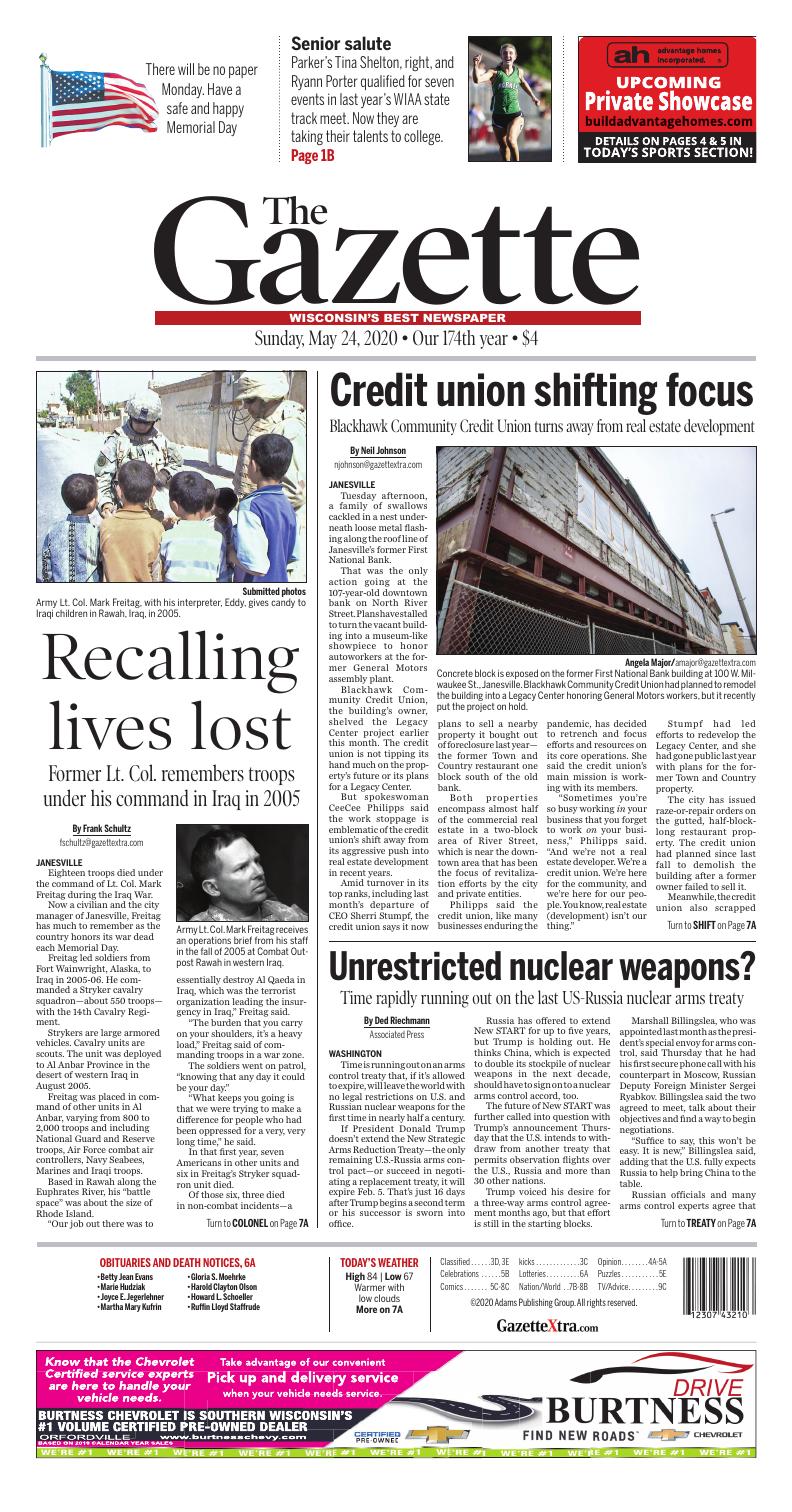 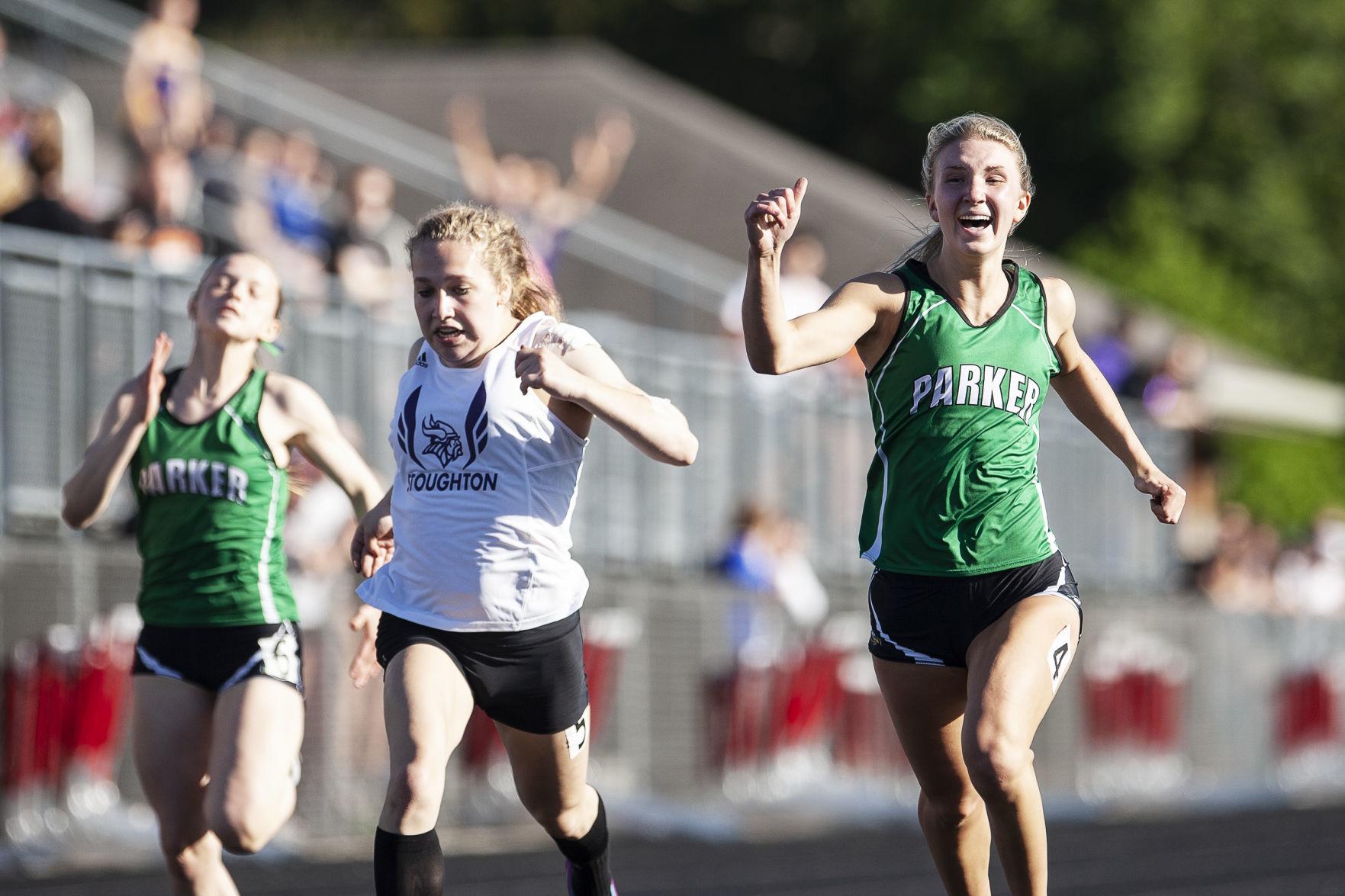 Janesville Parker’s Tina Shelton, right, flashes a smile as she crosses the finish line in first place in the 100-meter dash at the WIAA Division 1 Badger track sectional Thursday, May 23, 2019, in Lake Geneva.

Concrete block is exposed on the former First National Bank building at 100 W. Milwaukee St., Janesville. Blackhawk Community Credit Union had planned to remodel the building into a Legacy Center honoring General Motors workers, but it recently put the project on hold.

Tuesday afternoon, a family of swallows cackled in a nest underneath loose metal flashing along the roof line of Janesville’s former First National Bank.

That was the only action going at the 107-year-old downtown bank on North River Street. Plans have stalled to turn the vacant building into a museum-like showpiece to honor autoworkers at the former General Motors assembly plant.

Blackhawk Community Credit Union, the building’s owner, shelved the Legacy Center project earlier this month. The credit union is not tipping its hand much on the property’s future or its plans for a Legacy Center. 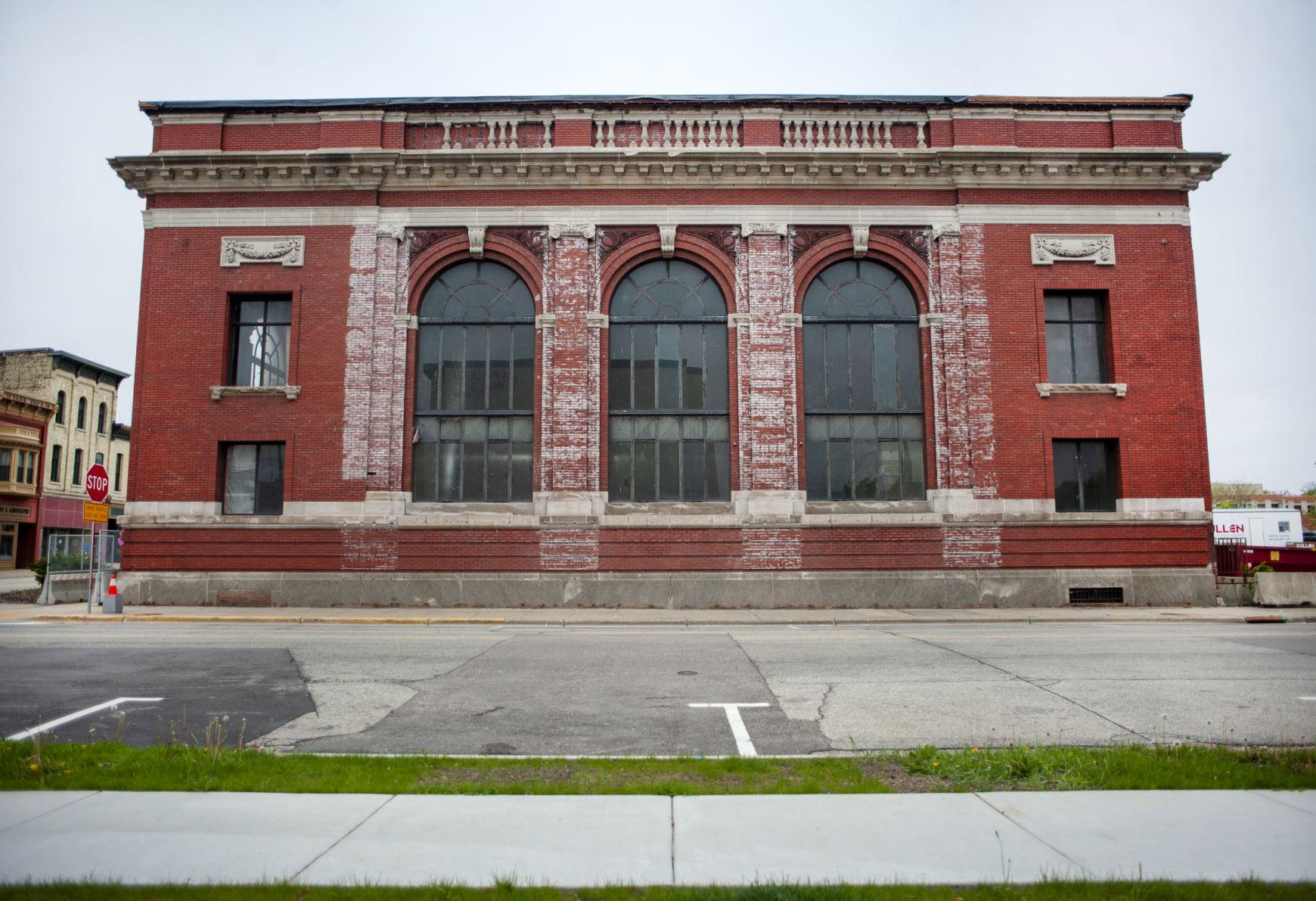 A Blackhawk Community Credit Union officials said the credit union’s pause on its Legacy Center project is emblematic of a shift away from real estate development.

But spokeswoman CeeCee Philipps said the work stoppage is emblematic of the credit union’s shift away from its aggressive push into real estate development in recent years.

Amid turnover in its top ranks, including last month’s departure of CEO Sherri Stumpf, the credit union says it now plans to sell a nearby property it bought out of foreclosure last year—the former Town and Country restaurant one block south of the old bank.

Both properties encompass almost half of the commercial real estate in a two-block area of River Street, which is near the downtown area that has been the focus of revitalization efforts by the city and private entities. 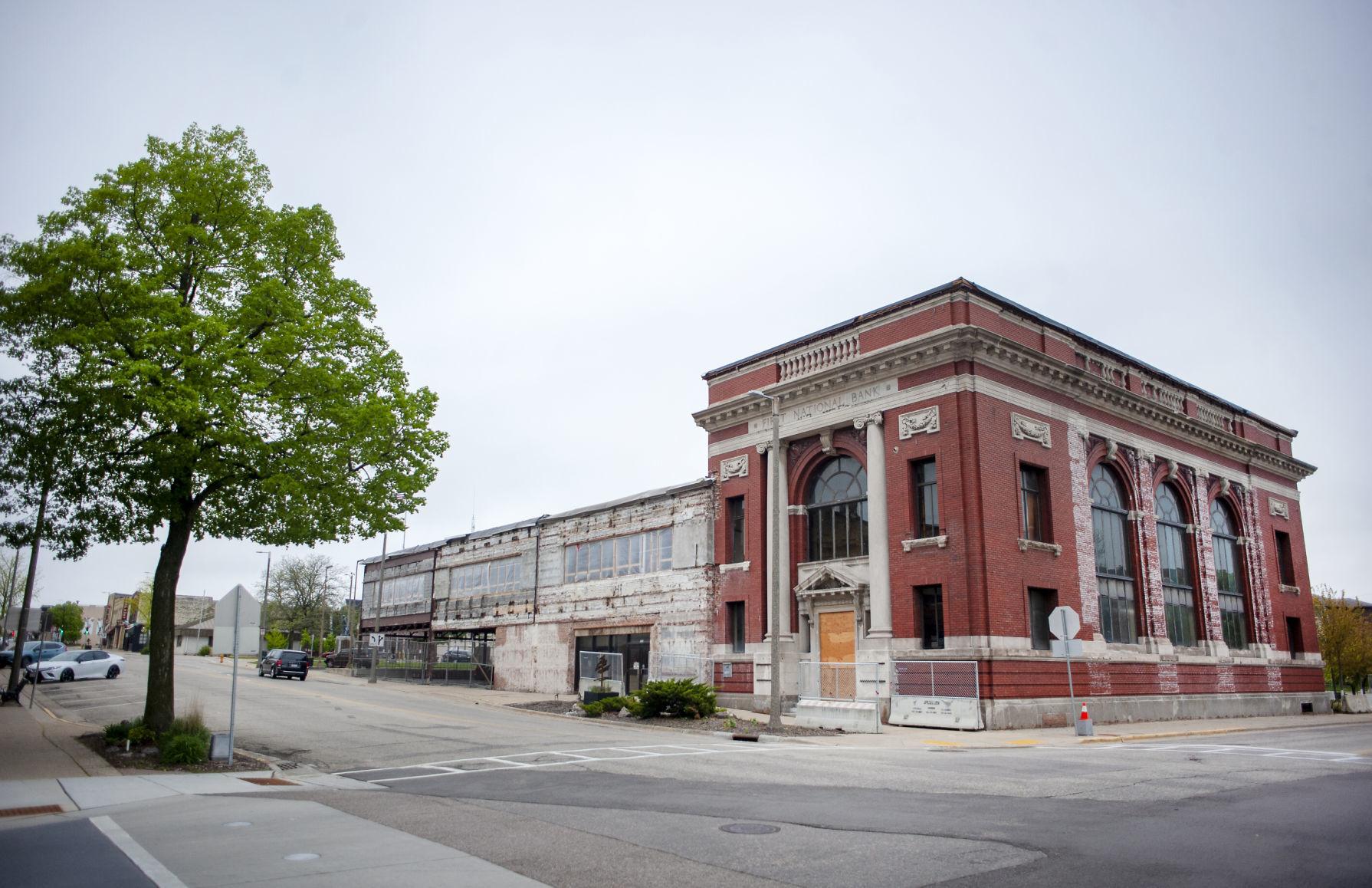 Stumpf had led efforts to redevelop the Legacy Center, and she had gone public last year with plans for the former Town and Country property.

The city has issued raze-or-repair orders on the gutted, half-block-long restaurant property. The credit union had planned since last fall to demolish the building after a former owner failed to sell it.

Meanwhile, the credit union also scrapped plans to build a new headquarters on the site of the former Moose Lodge on Rockport Road. Both the Legacy Center and the headquarters building were to be completed by 2021.

Philipps said the credit union has a buyer under contract for the former Town and Country, and a deal could close in June.

She declined to identify the buyer or the buyer’s intentions for the site, saying only that the deal would be a “good fit” for downtown.

Last summer, Stumpf told The Gazette the credit union had considered salvaging part of the building. By fall 2019, she had switched course and said it would be razed because inspections showed it wasn’t structurally sound. 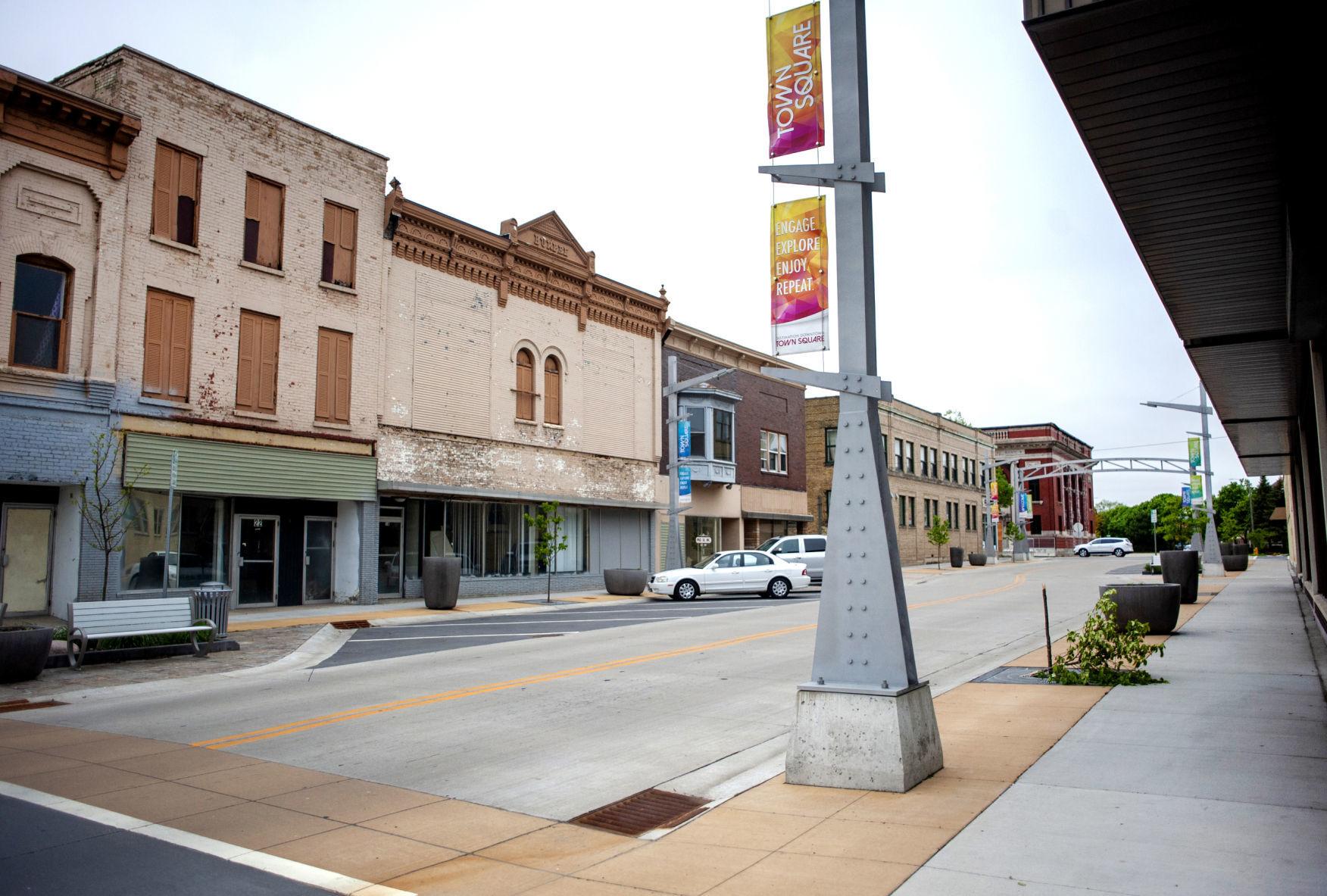 At the time, she said the site had potential for mixed commercial-residential use.

In an interview, Janesville City Manager Mark Freitag said the raze-or-repair orders remain in effect. Based on talks with credit union officials, the city expects the property will be razed by early July, he said.

It’s not as clear what might occur at the former First National Bank building.

As recently as January, Stumpf had announced plans to turn the bank’s annex offices that overhang the drive-through into space for a small grocery store and coffee shop.

The credit union already has stripped back the building’s marble façade to reveal the original 1913 brick exterior. Inside, contractors have pulled out walls and ceilings that covered a vaulted ceiling and mezzanine.

Jim Johnson, who bought the property from former owner Chase Bank in 2017, said he had several interested buyers before Blackhawk Community Credit Union bought the site. Those suitors included developers who Johnson said were eyeing plans for downtown apartments.

Most of those prospective buyers were interested in demolishing the bank and redeveloping the 1.5-acre site. Johnson said he “resisted” selling to them and felt good when he sold the property to the credit union because it planned to restore the bank to its 1913 condition.

Philipps said the credit union intends to move forward on a Legacy Center at some point, but it hasn’t decided whether the center will be located at the former bank.

She declined to discuss whether the credit union would consider selling the property. She said the credit union is a “responsible company” that has no intention of leaving a historic downtown property hanging fire over the long term.

“We’re not going to leave things in a state of flux,” Philipps said. “We are committed. The decisions that we make are going to be right for our members, but also for the community. Our commitment is that we’re not going to do something that’s not going be in line with what we’d want to see happen in Janesville as well.”

Eighteen troops died under the command of Lt. Col. Mark Freitag during the Iraq War.

Now a civilian and the city manager of Janesville, Freitag has much to remember as the country honors its war dead each Memorial Day.

Strykers are large armored vehicles. Cavalry units are scouts. The unit was deployed to Al Anbar Province in the desert of western Iraq in August 2005.

Freitag was placed in command of other units in Al Anbar, varying from 800 to 2,000 troops and including National Guard and Reserve troops, Air Force combat air controllers, Navy Seabees, Marines and Iraqi troops.

Based in Rawah along the Euphrates River, his “battle space” was about the size of Rhode Island.

“Our job out there was to essentially destroy Al Qaeda in Iraq, which was the terrorist organization leading the insurgency in Iraq,” Freitag said.

“The burden that you carry on your shoulders, it’s a heavy load,” Freitag said of commanding troops in a war zone.

The soldiers went on patrol, “knowing that any day it could be your day.”

“What keeps you going is that we were trying to make a difference for people who had been oppressed for a very, very long time,” he said.

In that first year, seven Americans in other units and six in Freitag’s Stryker squadron unit died.

Of those six, three died in non-combat incidents—a suicide, a vehicle rollover and a heart attack. The three combat deaths were all from improvised explosive devices (IEDs), or bombs planted in roads that blew up under the soldiers’ armored vehicles.

Freitag was in one of the high-riding, eight-wheeled Strykers when an IED blew up under it.

“It lifted the vehicle 30 feet into the air. Only by the grace of God did we walk away,” he said.

The six soldiers suffered headaches, bumps and bruises but survived because the explosion was triggered near the front of the vehicle. Another second, and it would have been a different story, he said.

One of his soldiers was special in many ways. Freitag asked that the soldier’s privacy be respected, so he is referred to here as Staff Sgt. Smith.

“Everybody loved Staff Sgt. Smith. Nice, congenial, good sense of humor, just a joy to be around,” Freitag recalled.

A husband and father, “He had a smile from ear to ear. You’d see him coming just based on that smile. It didn’t matter—rain, night, fog—you knew it was Staff Sgt. Smith.”

Smith’s platoon suffered repeated IED explosions during that first year in Al Anbar. They led the unit in number of IEDs encountered in the first few months.

Some IEDs were worse than others. Sometimes they just popped the tires. But there was always that explosion.

“After a couple of those things, it really does something to your psyche, and Staff Sgt. Smith came to our command sergeant major and said, ‘I don’t feel confident anymore. I need take a break,’” Freitag said.

Smith was assigned to duties at the outpost. He kept track of units coming and going, making sure they had quarters, chow and supplies. His personality was perfect for the job of unofficial greeter, and everyone got to know him.

The Stryker unit was preparing to return to Alaska in July 2006, when Freitag’s brigade commander called and said they were being held in-country and moved to Baghdad, where sectarian violence had intensified.

“He said, ‘Rally your troops and meet me at Baghdad International Airport ASAP,” Freitag recalled.

The unit was in combat in Baghdad 12 days later.

“People had plans. They knew they were going to be deployed for the year and then go home and be reunited with their families,” Freitag said.

Instead, they faced attacks for four additional months under fire, both on patrol and from rockets and mortar rounds that struck inside their base.

“The burden that any day could be your day, that’s a tough reality for people to wrap their minds around,” he said. But the soldiers responded and did their duty.

Four more from the Stryker squadron died during those four months, plus one from another unit Freitag commanded. One was Staff Sgt. Smith.

When the unit moved to Baghdad, Smith had told the sergeant major he wanted to return to a cavalry platoon.

“It was his sense of pride, saying, ‘I need to serve my country out on the line, the way I started this deployment,’” Freitag said.

About a month after the move to Baghdad, Smith was operating the heavy machine gun on top of a Stryker when a sniper shot him. He died later in a hospital.

“It was devastating to the entire organization because he was so well-liked, and everybody knew his story,” Freitag said.

Smith was one of the 4,418 military deaths in the Iraq War, according to the Department of Defense. Another 74 died in the post-war Operation New Dawn.

Another 2,538 troops died in other parts of the ongoing global war on terrorism since 2001, most of them in Afghanistan.

They joined the hundreds of thousands of Americans who are remembered on Memorial Day for giving their lives in their country’s wars since the Revolution.

“It was an honor and privilege to lead and serve soldiers in combat,” Freitag said. “The things you see people do in combat are amazing. The sheer bravery and tenacity to get the job done during some very adverse conditions speaks volumes of our American youth.” 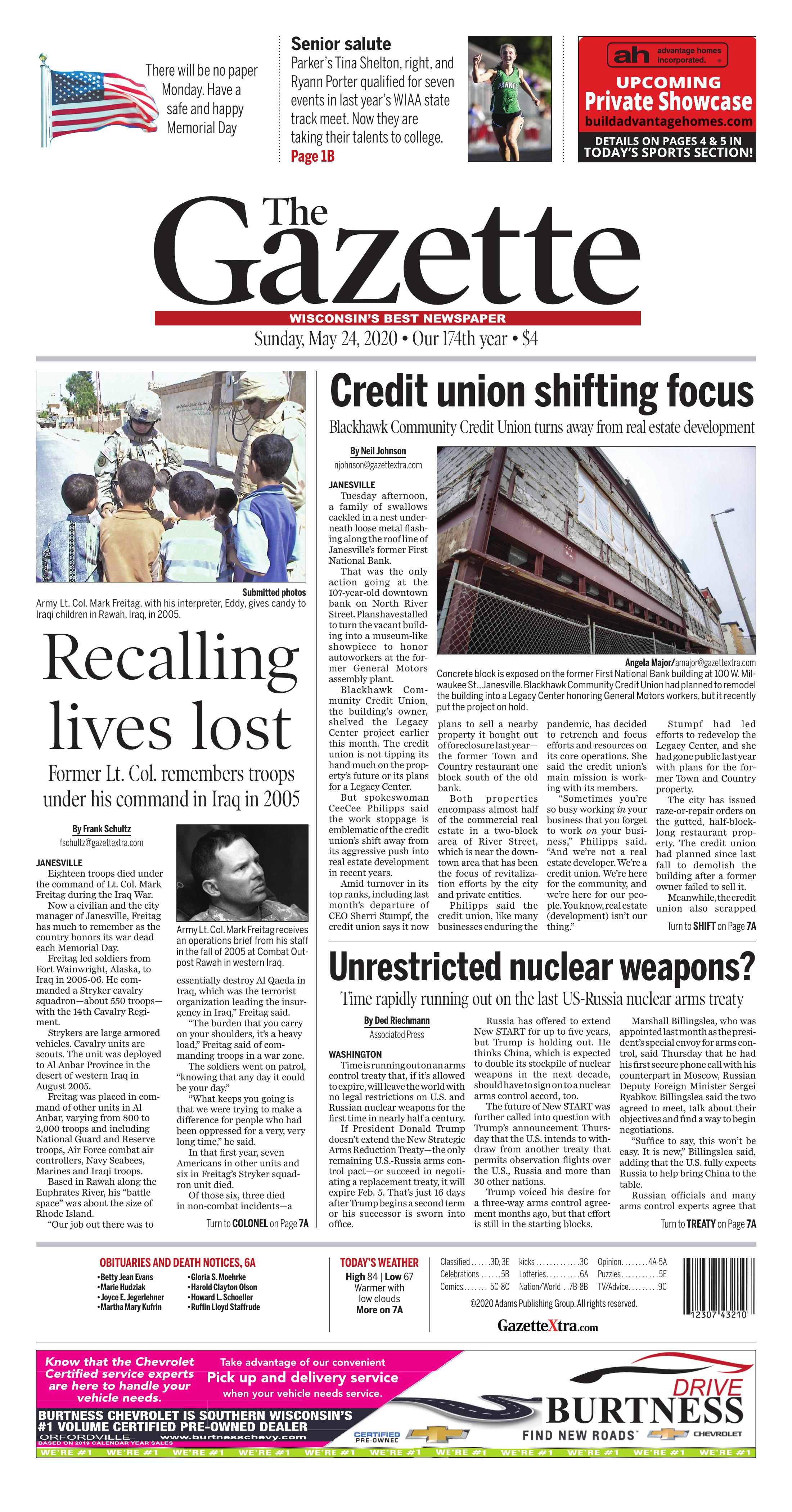