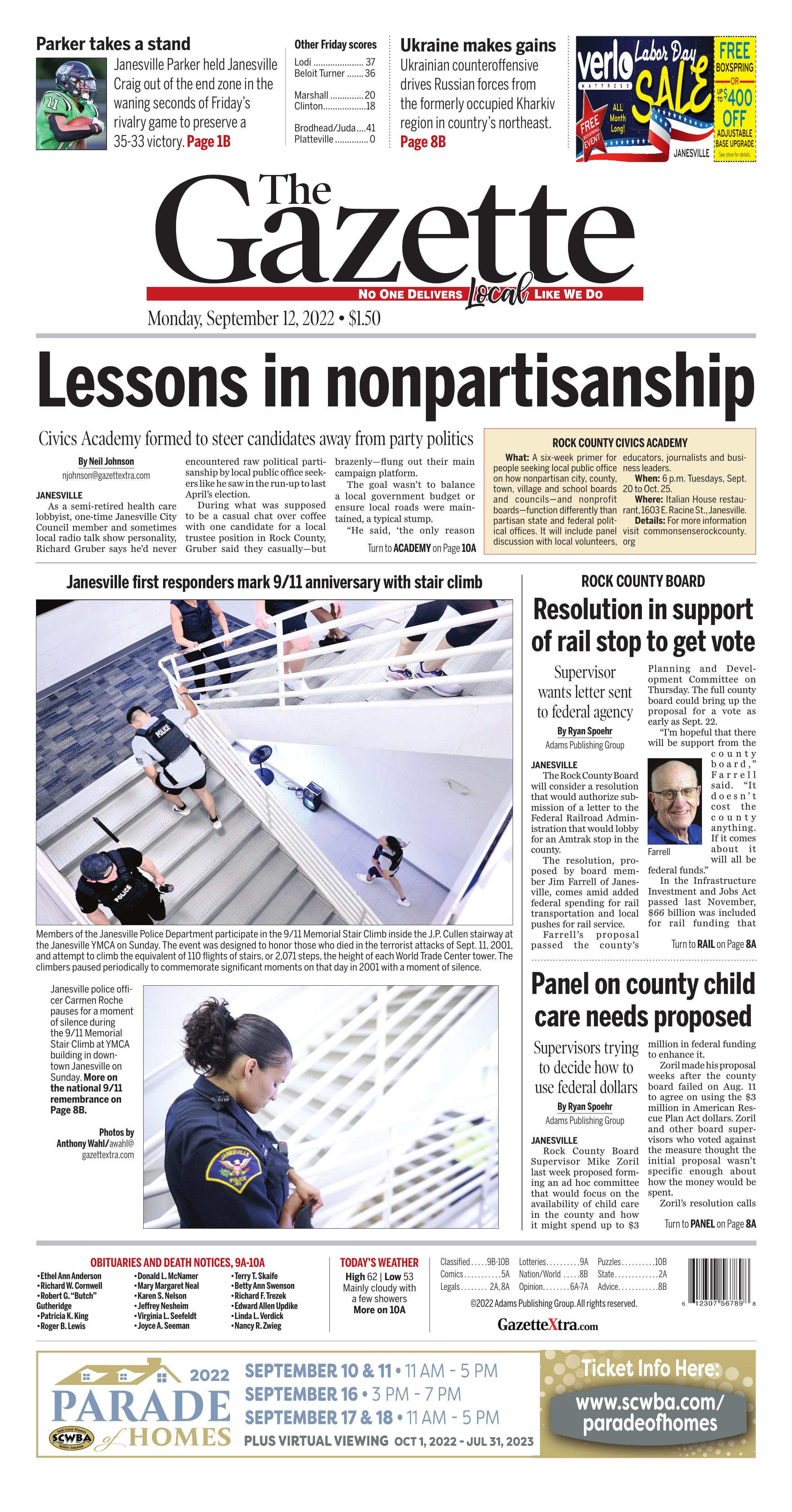 During what was supposed to be a casual chat over coffee with one candidate for a local trustee position in Rock County, Gruber said they casually—but brazenly—flung out their main campaign platform.

The goal wasn’t to balance a local government budget or ensure local roads were maintained, a typical stump.

The memory still boggles Gruber’s mind—and it finally pushed him to launch the Rock County Civics Academy, a private nonpartisan civics group that he and two friends had been building for the last two years.

The academy is a six-week set of seminars to be held on Tuesday nights starting Sept. 20, aimed at people who are considering running for public office at the town, village, city, county or school board level.

The seminars are being offered in the months leading up to the April 2023 local spring election, under the banner “Common Sense Rock County.” It’s an offshoot of Common Sense Reestablished, LLC, a boutique public affairs and policy consultancy service that Gruber, Murphy and Severson quietly launched in 2020.

The academy is being segmented off into topical panels to be led by people Gruber said make up the “tapestry” of a community, including local educators, youth center volunteers, area journalists and business entrepreneurs.

At the core, the three say, they want to offer a reality check to those who seek to win berths on local boards and councils. The tasks and issues they’ll be charged with in those posts are usually hyperlocal in scope, far removed from the national partisan political tug-of-wars they might see roll out on cable news outlets such as Fox News and CNN.

Gruber said his experience last spring with the local office seeker whose apparent goal was to dismantle Democratic U.S. Sen. Tammy Baldwin might be an extreme example. But he said political partisanship has begun to cascade into town halls and county board rooms.

Gruber said it’s evidence that the public’s concept of what is local “politics” has shifted, at a time when fewer people are stepping up to join local governing boards, including for non-government nonprofits.

Meanwhile, he said, people attending the same local meeting in hopes of catching the vote on a local zoning change, that affects their home or business, must first sit through disjointed partisan-like filibustering on national or global policy matters.

“We’ve lost sight of the fact that these jobs are intended to take care of some really basic things,” Gerber said, and “those things that are absolutely necessary for 64,500 people in town to live together in relative peace and harmony.”

“We’re not here to change what our position is relative to NATO’s involvement in the Ukraine. I mean, I might have a position, but it has nothing to do with what I’m doing if I’m on the city council.”

Murphy said it’s also his hope is that the Civics Academy can, in a pragmatic and simple way, demystify local public office. It’s far less complex than it might appear to those considering filing April candidacy papers, he said.

“How it works is you might go to your son or daughter or grandchild’s soccer game or football game, and somebody’s probably going to come up and question you about something you said or did or that they heard on the radio or in the newspaper or watched on TV. They’ll come right up to you at the grocery store,” Murphy said. “That’s local government.”

What: A six-week primer for people seeking local public office on how non-partisan city, county, town, village and school boards and councils -- and nonprofit boards -- function differently than partisan state and federal political offices. It will include panel discussion with local volunteers, educators, journalists and business leaders. 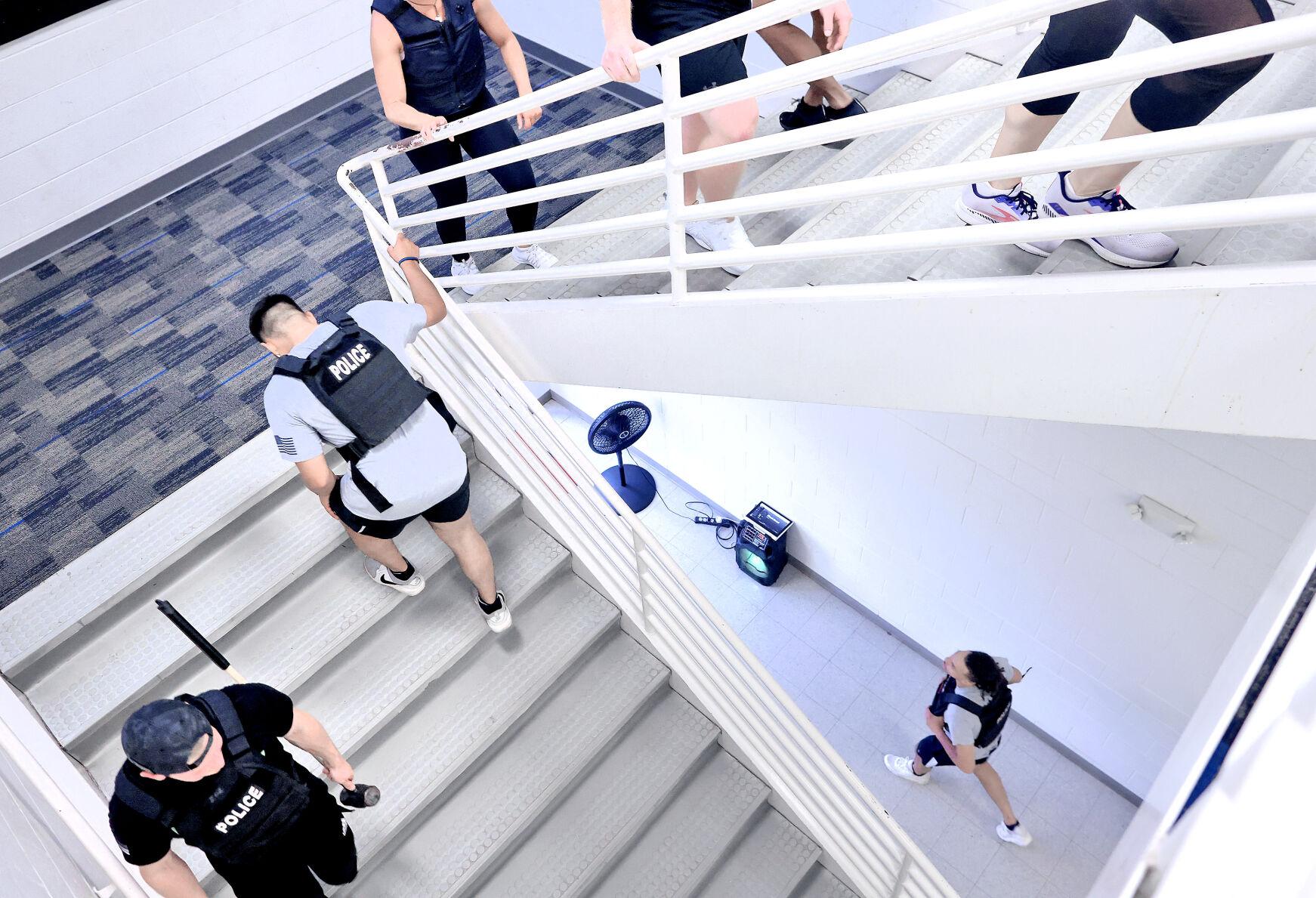 Members of the Janesville Police Department participate in the 9/11 Memorial Stair Climb inside the J.P. Cullen stairway at the Janesville YMCA on Sunday. The event was designed to honor those who died in the terrorist attacks of Sept. 11, 2001, and attempt to climb the equivalent of 110 flights of stairs, or 2,071 steps, the height of each World Trade Center tower. The climbers paused periodically to commemorate significant moments on that day in 2001 with a moment of silence. 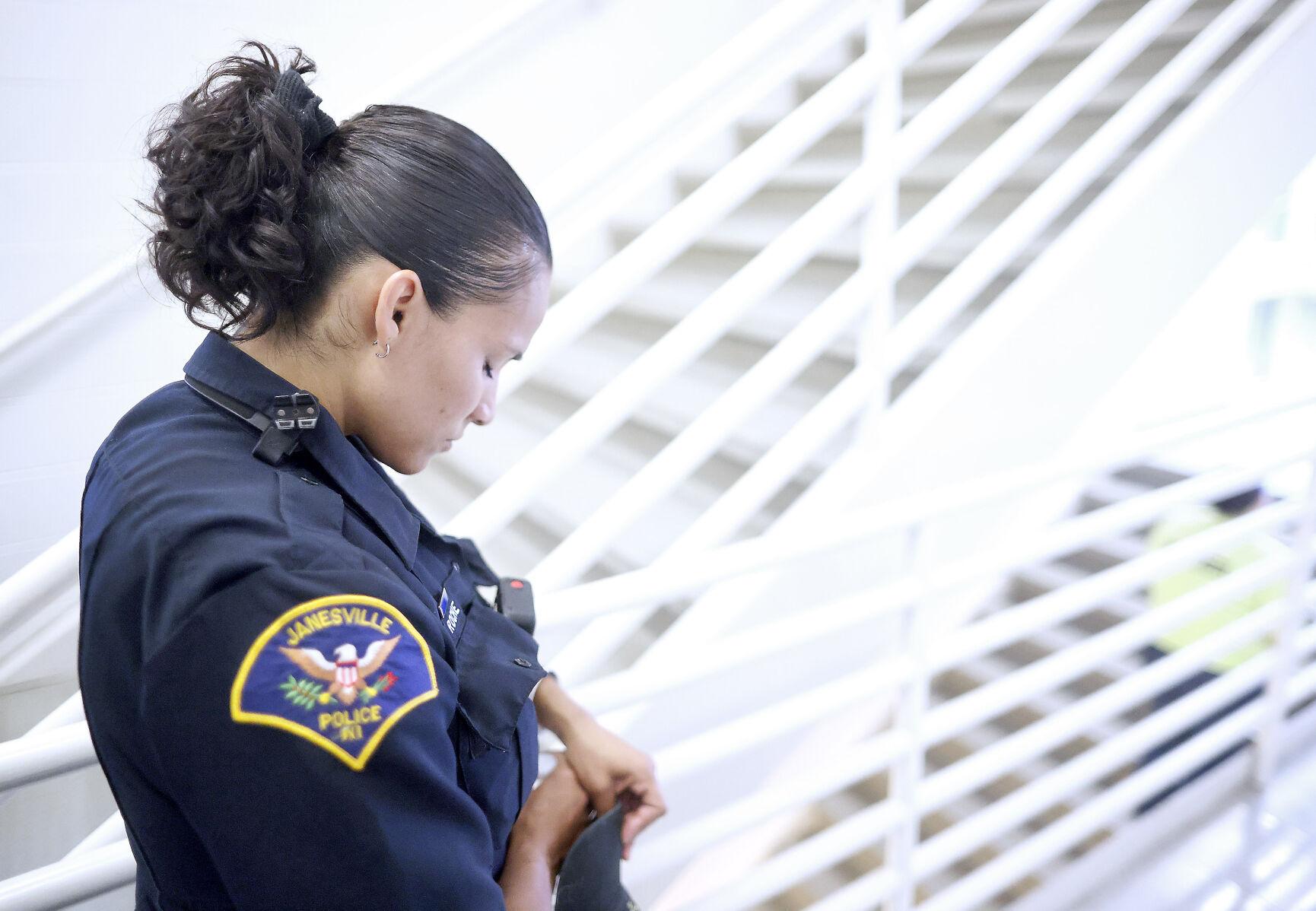 Janesville police officer Carmen Roche pauses for a moment of silence during the 9/11 Memorial Stair Climb at YMCA building in downtown Janesville on Sunday. More on the national 9/11 remembrance on Page 8B.

The Rock County Board will consider a resolution that would authorize submission of a letter to the Federal Railroad Administration that would lobby for an Amtrak stop in the county.

The resolution, proposed by board member Jim Farrell of Janesville, comes amid added federal spending for rail transportation and local pushes for rail service.

Farrell’s proposal passed the county’s Planning and Development Committee on Thursday. The full county board could bring up the proposal for a vote as early as Sept. 22.

“I’m hopeful that there will be support from the county board,” Farrell said. “It doesn’t cost the county anything. If it comes about it will all be federal funds.”

In the Infrastructure Investment and Jobs Act passed last November, $66 billion was included for rail funding that Amtrak is using for maintenance and to expand to up to 160 communities in the U.S., many of which are in the Midwest.

Last October, the Department of Transportation released the “Midwest Regional Rail Plan,” which lays out a 40-year “vision” to increase Amtrak train stops across the Midwest, including in Madison and Chicago.

He also hopes it could be a step for the area to help reduce the effects of climate change.

“We just built another lane to I-90. We can’t build more roads,” he said. “We have to find a way to be less reliant on cars.”

Two of Amtrak’s commuter rail lines serve Wisconsin. One is the Hiawatha, which extends from Milwaukee to Chicago with a stop in Sturtevant in Racine County. The Empire Builder line, which runs from Chicago to the Pacific Northwest, also has stops in Wisconsin in Milwaukee, Columbus, Portage, Wisconsin Dells, Tomah and La Crosse.

Madison’s only connection to Amtrak is via the Dutch Mill park and ride.

Farrell said he has no preference for where a Rock County rail stop would be as long as the county gets one.

Steps to add rail service in Wisconsin and Illinois have been taken just in the past two months.

The Wisconsin DOT, along with the Wisconsin Transit and Realty Group, sent a letter to the Federal Transit Administration proposing the implementation of commuter rail service along an existing 33-mile freight rail corridor from Kenosha to Milwaukee, which would go through Racine. It is anticipated the line would serve nine stations between the three cities, while also providing a connection to Chicago from a Metra rail station in Kenosha. Metra is a rail service based in Chicago but also extends to several destinations, mostly in Illinois. The letter states the projected start of service would be in mid-2026.

On Tuesday, Illinois secured funding to add additional rail service between Rockford and Chicago to include stops in the suburbs of both cities. It is a part of a plan to add high-speed rail service throughout that state and to have feeder networks. Illinois also plans to connect Chicago and St. Louis in that project.

Rock County Board Supervisor Mike Zoril has proposed forming an ad hoc committee to focus on the availability of child care in the county and how it might spend up to $3 million in federal funding to enhance it.

Zoril made his proposal last week, after the county board failed on Aug. 11 to agree on using the $3 million in American Rescue Plan Act dollars on child care matters.

Zoril and other board supervisors who voted against the measure thought the initial proposal wasn’t specific enough about how the money would be spent.

Zoril’s resolution calls for adding the committee to “study community childcare needs and evaluate potential uses” of the ARPA funding to “include up to $3 million funded by reallocating money away from the county’s Small Business Grant Program” to use toward childcare.

Zoril said Aug. 11 that he felt help was needed to assist child care centers, particularly as a parent, but that he didn’t want to make decisions based on what was best for him but rather on constituents’ needs.

As proposed, the ad hoc committee would be comprised of two county board supervisors, three parents of day care-age children residing in Rock County, one child care provider that serves less than 10 children, a licensed child care provider serving more than 40 children, an unlicensed day care provider, a United Way Blackhawk Region representative, and one economics professor or business educator.

A draft resolution states that “any county supervisor who owns, operates or is employed by a childcare provider, or who provides business-related services to a childcare provider, including but not limited (to) business consulting services and may obtain indirect financial gain” on any child care programs is ineligible to serve on the committee.

The county board approved an over-budget $9.8 million electrical contract for the project, so the county is taking $6 million out of its contingency fund to cover the difference.

In April, the county approved putting $96 million toward the new jail and tearing down the current facility, $78 million of which will be borrowed over the next three years.

Farrell is a Janesville resident and he lives within a mile of the fairgrounds.

He said revenue generated from the gun show is low and also cited the “gun show loophole” by which private gun sellers do not have to conduct federal background checks on buyers.

Farrell said that because the next gun show on the fairgrounds is in January, approving his resolution now would allow the county to give ample notice that a January 2024 gun show would not be held.