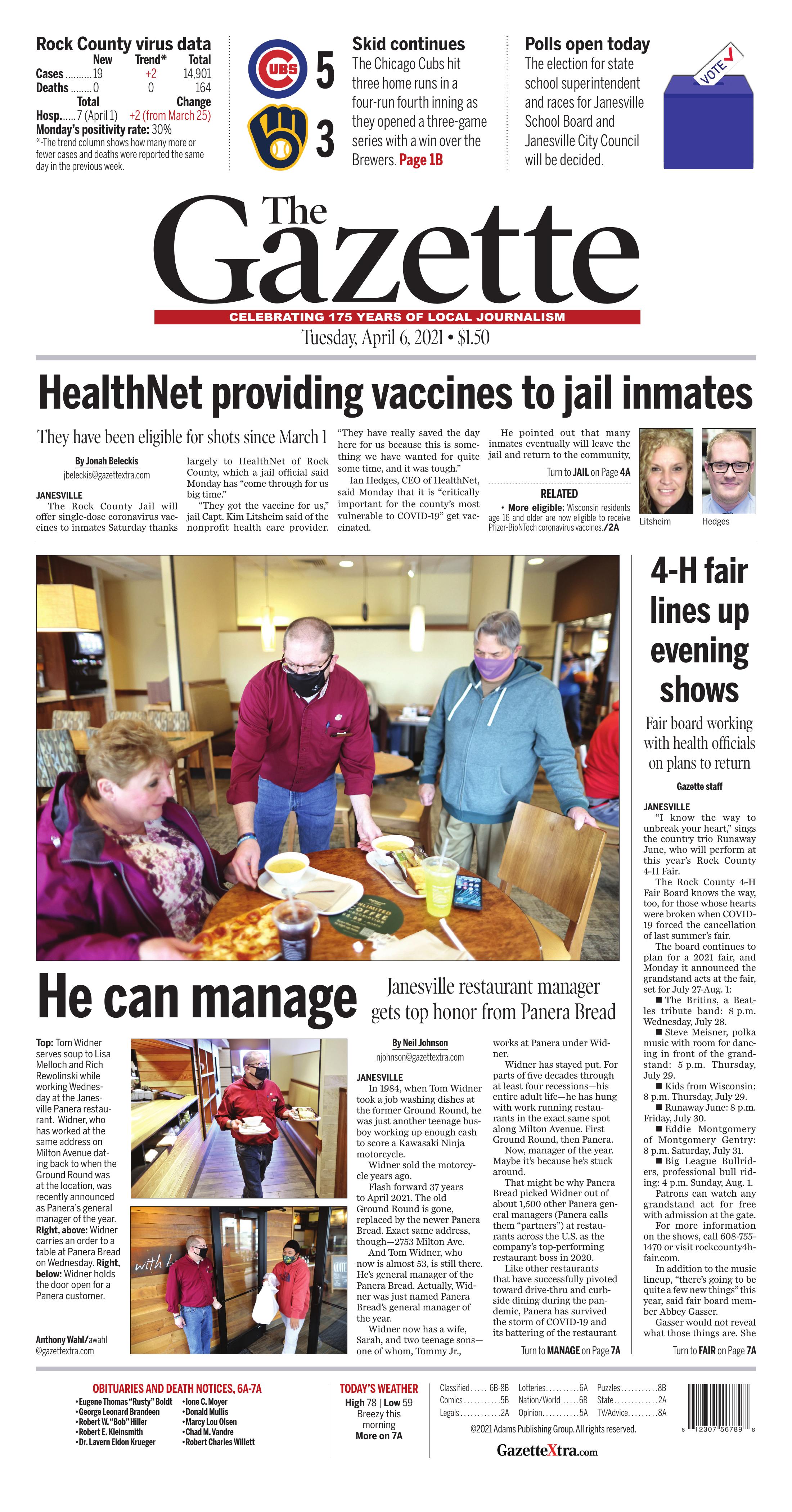 The Rock County Jail will offer single-dose coronavirus vaccines to inmates Saturday thanks largely to HealthNet of Rock County, which a jail official said Monday has “come through for us big time.”

“They got the vaccine for us,” jail Capt. Kim Litsheim said of the nonprofit health care provider. “They have really saved the day here for us because this is something we have wanted for quite some time, and it was tough.”

Ian Hedges, CEO of HealthNet, said Monday that it is “critically important for the county’s most vulnerable to COVID-19” get vaccinated.

He pointed out that many inmates eventually will leave the jail and return to the community, where they might face other barriers to getting the vaccine.

“So why not get them in a place in which we know that they’re at risk and we can locate them,” he said. “The sooner we vaccinate everybody, everyone wins.”

Jails and prisons have been among the most vulnerable places to COVID-19. Rock County’s jail saw an outbreak spread through the facility in December and into January, infecting more than half of the inmates there.

The Rock County Jail is moving closer to having no active COVID-19 cases among its inmates, but the physical and mental effects of the disease persist for some.

When asked about finally having a date for inmates to receive shots, Litsheim said, “Oh, it’s a relief.”

The jail will not require inmates to get vaccinated. In a recent survey, 91 of 237 inmates said they would be interested in getting the vaccine, Litsheim said.

Although they are not necessarily the same inmates who are in or will be in the jail Saturday, Litsheim said that number helped guide officials in getting 150 Johnson & Johnson doses.

A single-dose shot, as opposed to the two-dose options of Pfizer and Moderna, is important in this context because it could have been challenging to bring inmates back for a second dose after they’d been released from the jail.

Additionally, the Johnson & Johnson vaccine doesn’t have to be frozen like the others. Litsheim said if there are extra doses, they will not go to waste.

Hedges said HealthNet officials were able to get the necessary vaccines through the state “thanks to the advocacy” of Rep. Sue Conley, D-Janesville, and Rep. Amy Loudenbeck, R-Clinton.

When asked why the vaccines were obtained through the state and not the Rock County Public Health Department, county Health Officer Katrina Harwood said in an email that vaccine supply has not always been able to meet demand as new groups become eligible.

Still, she said the county is “using the limited influence that we may have to help vaccine providers get access to the type of vaccine that is most appropriate for the population they are serving.”

She said it appears that the flow of vaccine supply is increasing, “So we are hopeful that there will not be more delays such as the delay in getting vaccine to people who are currently residing in the jail.”

“We are grateful for vaccine providers across Rock County stepping up to ensure that people who are eligible for a vaccine receive one,” she said. “We know that the vaccine rollout process has not been as smooth as we all would have hoped for.”

The state’s health department made inmates eligible for the vaccine March 1 as the last group under the umbrella of congregate living facilities.

Monday marked the first day all Wisconsin residents age 16 and older were eligible for the vaccine.

When asked why it took until April 10 to vaccinate inmates, Litsheim stressed that she has been trying to get the jail population vaccinated as soon as it was possible.

Update: This story was updated at 6:57 p.m. Monday to include comment from the county’s health department.

Tom Widner serves soup to Lisa Melloch and Rich Rewolinski while working at the Janesville Panera restaurant. Widner, who has worked at the same location dating back to the Ground Round, was recently announced as Panera’s general manager of the year.

In 1984, when Tom Widner took a job washing dishes at the former Ground Round, he was just another teenage busboy working up enough cash to score a Kawasaki Ninja motorcycle.

Widner sold the motorcycle years ago.

Flash forward 37 years to April 2021. The old Ground Round is gone, replaced by the newer Panera Bread. Exact same address, though—2753 Milton Ave.

Widner now has a wife, Sarah, and two teenage sons—one of whom, Tommy Jr., works at Panera under Widner.

Widner has stayed put. For parts of five decades through at least four recessions—his entire adult life—he has hung with work running restaurants in the exact same spot along Milton Avenue. First Ground Round, then Panera. 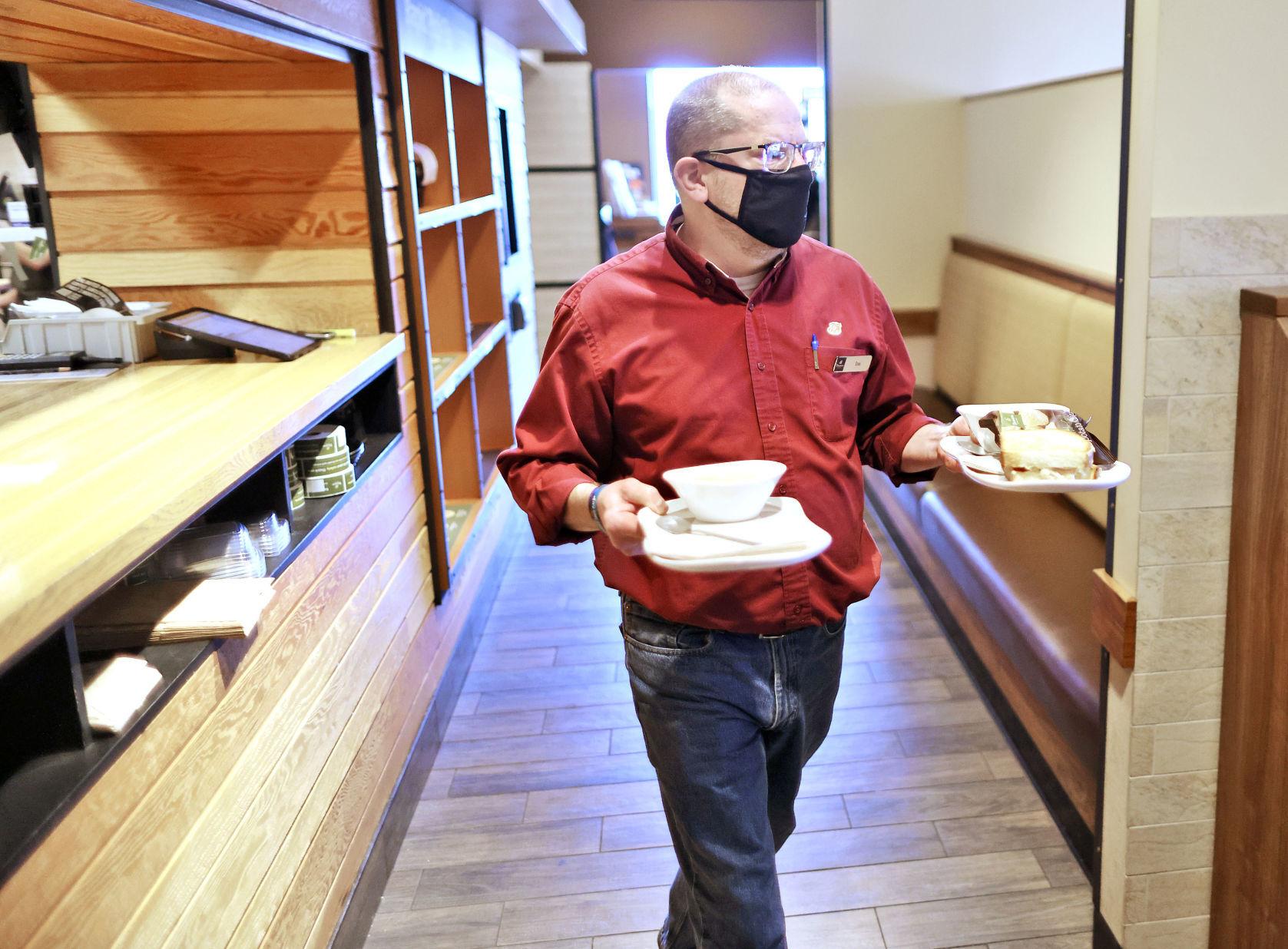 Tom Widner serves bowls of soup to a table while working at the Janesville Panera restaurant March 31. Widner, who has work at the same location dating back to the Ground Round, was recently announced as Panera’s general manager of the year.

Now, manager of the year. Maybe it’s because he’s stuck around.

That might be why Panera Bread picked Widner out of about 1,500 other Panera general managers (Panera calls them “partners”) at restaurants across the U.S. as the company’s top-performing restaurant boss in 2020.

Like other restaurants that have successfully pivoted toward drive-thru and curbside dining during the pandemic, Panera has survived the storm of COVID-19 and its battering of the restaurant industry.

The pandemic has dealt a few blows to the Milton Avenue dining spur. A few sit-down restaurants are gone. A defunct, family-owned buffet here. A chain Mongolian grill there.

Widner thinks Panera’s continued success in Janesville has much to do with brand loyalty and trust that Panera has cultivated in its customers everywhere. That’s something Panera’s top executives might appreciate hearing.

But Widner’s winning streak and the top company award for that work came late last month, after a full year of meeting head-on the pandemic and its challenges: staff illnesses, scheduling nightmares, new personal protection and social distancing commandments. 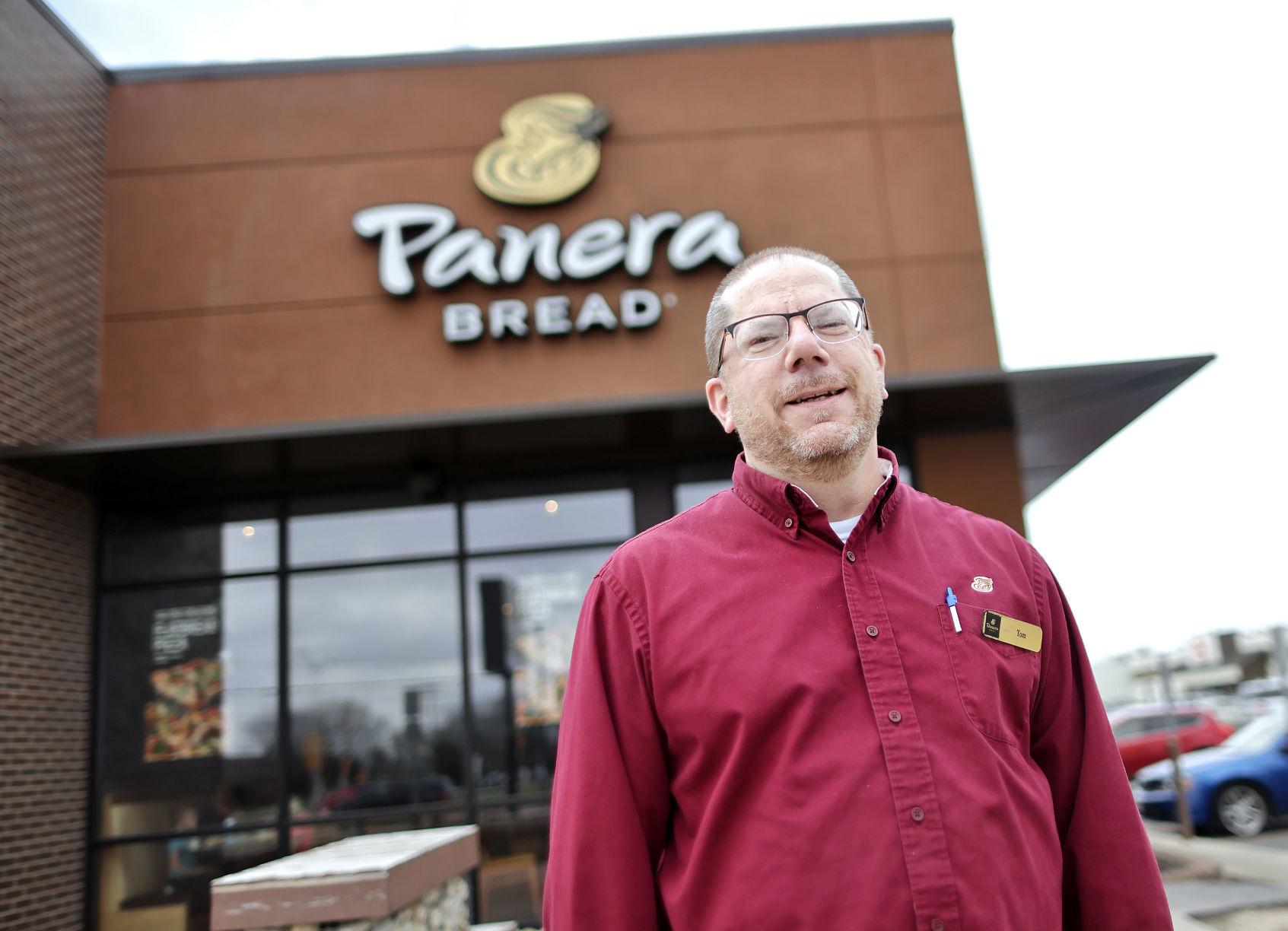 Tom Widner, who has worked at a restaurant at the same Milton Avenue address since he was a teenager, was recently announced as Panera’s general manager of the year.

Widner learned he is Panera’s top store manager while checked morning emails on his sales volume and other crucial news. He does the checking early before he leaves home. At the restaurant, he starts his day alongside staff prepping fresh food ingredients and sometimes baking Panera’s bread.

Widner’s grown up through the restaurant industry. Sometimes, standing in one section of the Milton Avenue Panera, Widner said he’ll suddenly remember what it was like to wrestle the teeming dining bar at Ground Round.

Then, it’s back to keeping an eye on his Panera’s scheduling scheme: a wave that starts with eight or nine staff who staff the shop and ready the day’s fresh food, all the while as customer traffic ramps up.

Later in the day at lunch, 16 staff are running and gunning sandwiches and baked goods to bigger and bigger gaggles of dine-in customers each day as the nation’s public and private health care systems see to the vaccination of millions more people.

Meanwhile, Widner said, it seems like nothing can slow the dramatic increase in drive-thru dining that’s been the only real predictable trend the pandemic has given us. One morning late last week, Panera’s drive-thru was stacked up six or seven vehicles deep. It wasn’t quite 10 a.m.

Inside, Widner came out of the kitchen’s side entrance with quick purpose but stopped to make sure a customer had everything he needed. On the upper corner of his cloth face mask read “Panera Bread.” Above, his eyes were direct and in charge. Like a working soldier or fast-casual restaurant man. 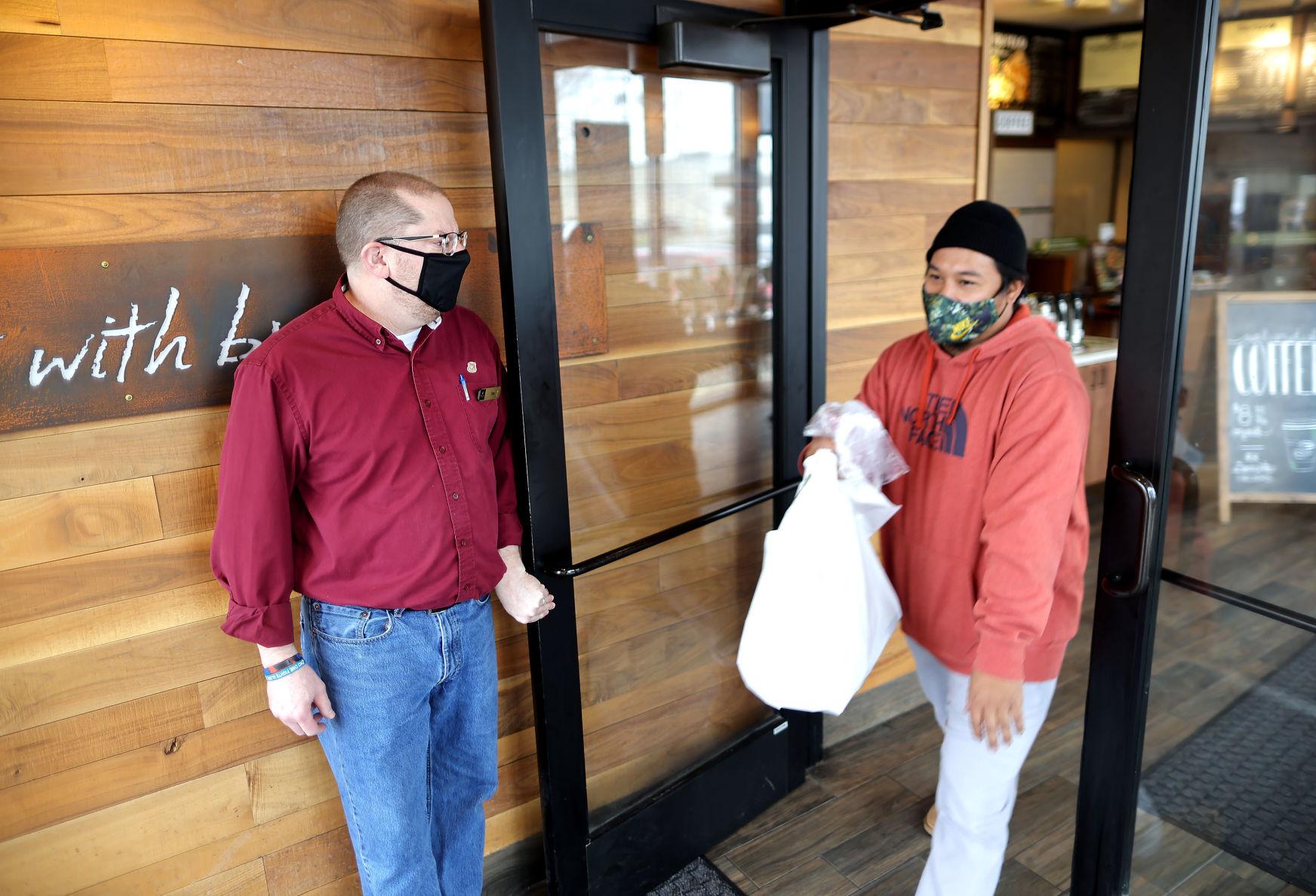 Tom Widner holds the door for an exiting customer at the Janesville Panera restaurant March 31. Widner, who has work at the same location dating back to the Ground Round, was recently announced as Panera’s general manager of the year.

Widner’s seen his own life change through twists and turns that moved him from managing a Ground Round to managing a Panera Bread at the same spot, all while his children grew and wave after wave of late-teens and young adults cycled through.

Some have moved on to college, factory jobs, who knows? Some Widner has helped get jobs at Paneras in their college towns. Another assistant manager more recently “graduated.” That means Widner’s worker went on to manage another, bigger Panera in Appleton.

Widner sees himself more and more as a kind-of-dad to a young staff that now includes his own son. Widner’s letting his kid buy a car, not a sporty, Japanese speed bike.

Widner had six other siblings at home. Dad said: “You want a motorcycle? That’s fine. Get a job to pay for it.”

Widner has come up with a couple of his own theories on work. A few of them he probably imparts to his own young staff.

One is: “Hard work never goes out of style.”

The other: “You’ll make mistakes. Just slow down and take your time a little. You’ll be fine.” 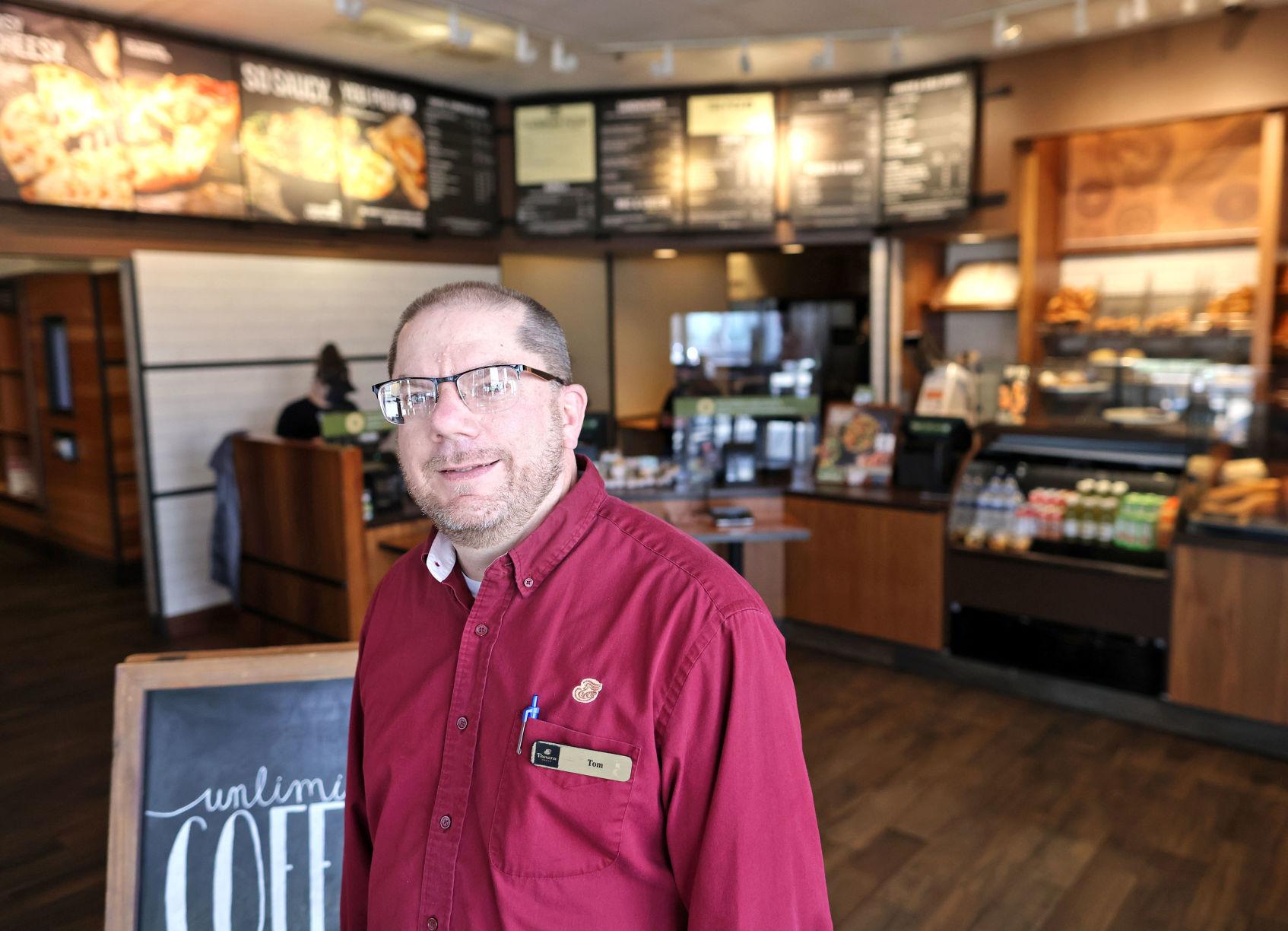 Tom Widner, who has work since a teenager at the same restaurant location dating back to when it was Ground Round, was recently announced as Panera’s general manager of the year.

Obituaries and death notices for April 6, 2021

An afternoon view from above of the Rock County 4-H Fair in 2017.

Runaway June is scheduled to perform at 8 p.m. July 30 at the Rock County 4-H Fair in Janesville.

“I know the way to unbreak your heart,” sings the country trio Runaway June, who will perform at this year’s Rock County 4-H Fair.

The Rock County 4-H Fair Board knows the way, too, for those whose hearts were broken when COVID-19 forced the cancellation of last summer’s fair.

The board continues to plan for a 2021 fair, and Monday it announced the grandstand acts at the fair, set for July 27-Aug. 1:

Patrons can watch any grandstand act for free with admission at the gate.

In addition to the music lineup, “there’s going to be quite a few new things” this year, said fair board member Abbey Gasser.

Fair Manager Mary Check said vendors are signing up more slowly than they have in the past, but she hopes more will register as the summer approaches.

“I think people are still waiting to see if for sure it’s going to happen,” Check said, noting the uncertainty about the COVID-19 pandemic.

Fair officials continue to work with the county health department, but they have not yet decided whether to require masks or any other COVID-19 precautions, Gasser said.

“We’re hoping it’s an outdoor event. We’re hoping that by the time we get to the end of July, people will have been vaccinated or have had the opportunity for that. The environment, hopefully, is moving us in this direction, where we can do this,” Gasser said.

The fair board also plans a food truck festival called Rock the Grounds for July 9-10 in an effort to recoup financial losses from the cancellation of the 2020 fair.