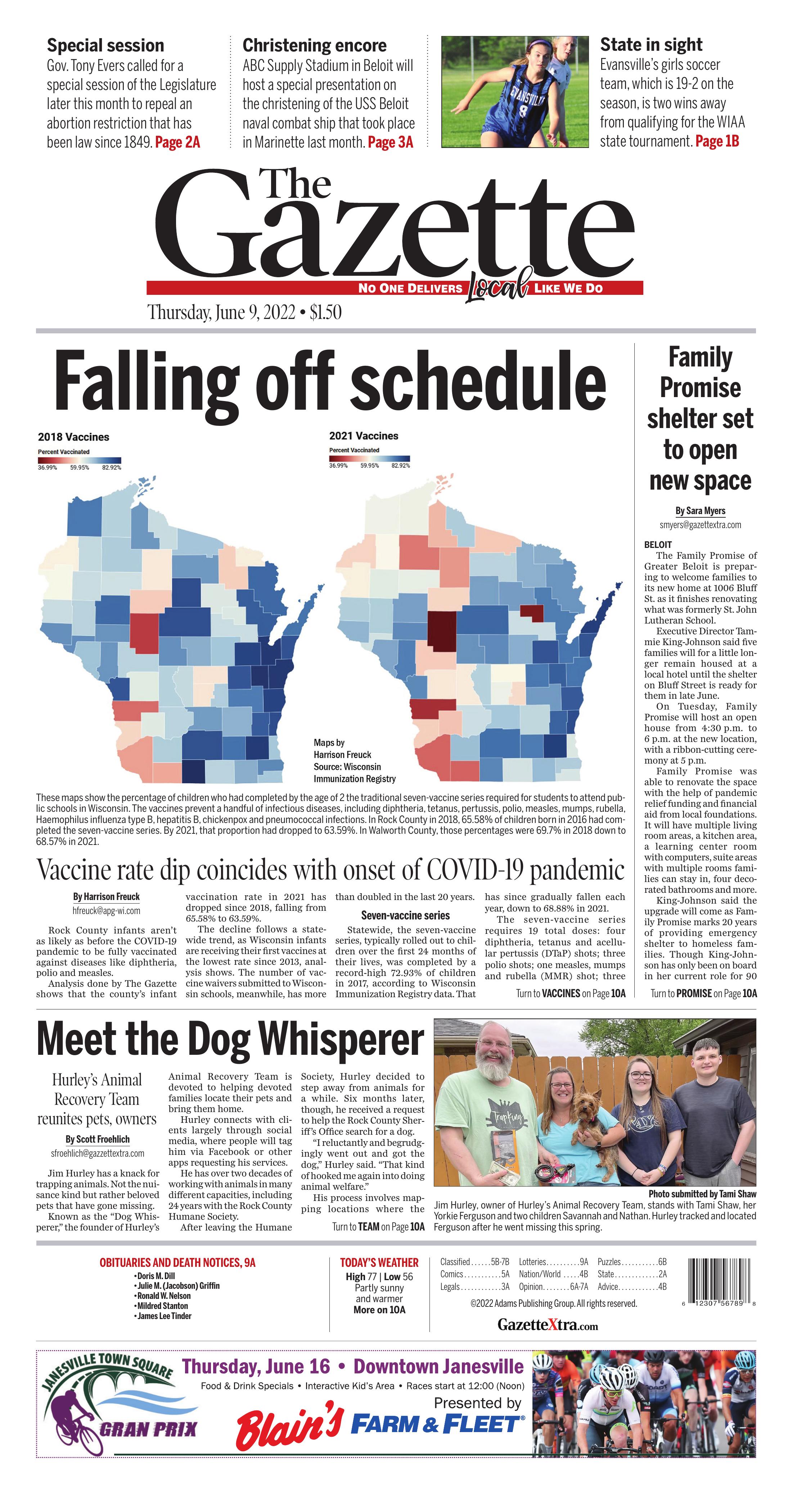 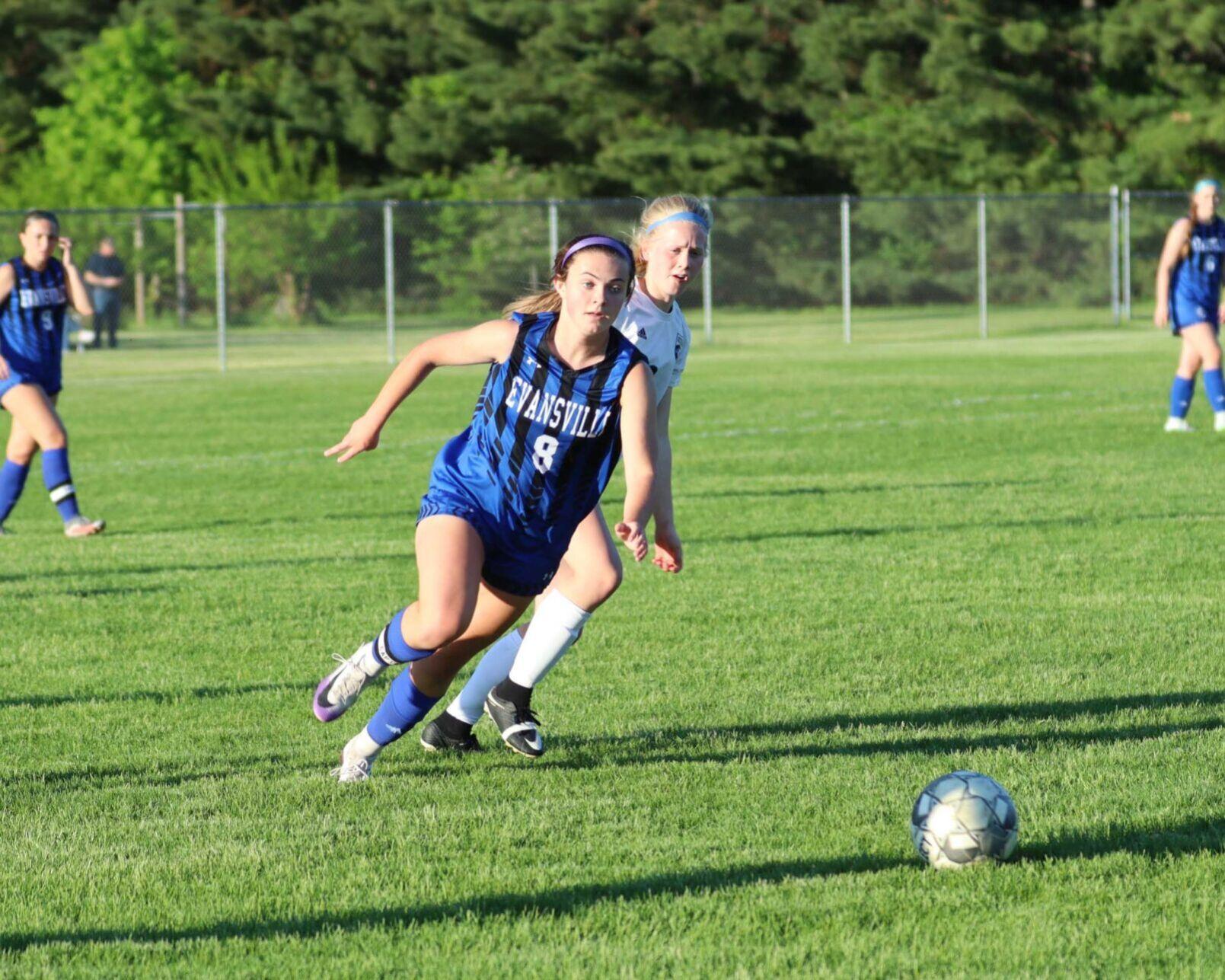 Tammie King-Johnson, executive director of Family Promise of Greater Beloit, sits on a couch in the new living room area at the shelter’s new location.

The new living room area at the Family Promise of Greater Beloit.

The Family Promise of Greater Beloit is preparing to welcome families to its new home at 1006 Bluff St. as it finishes renovating what was formerly St. John Lutheran School.

Executive Director Tammie King-Johnson said five families will for a little longer remain housed at a local hotel until the shelter on Bluff Street is ready for them in late June.

On Tuesday, Family Promise will host an open house from 4:30 p.m. to 6 p.m. at the new location, with a ribbon-cutting ceremony at 5 p.m.

Family Promise was able to renovate the space with the help of pandemic relief funding and financial aid from local foundations. It will have multiple living room areas, a kitchen area, a learning center room with computers, suite areas with multiple rooms families can stay in, four decorated bathrooms and more.

King-Johnson said the upgrade will come as Family Promise marks 20 years of providing emergency shelter to homeless families. Though King-Johnson has only been on board in her current role for 90 days, she was the founding executive director at the shelter’s inception.

“Twenty-plus years ago, there was a group of us in Beloit, and there was an issue with family homelessness in Beloit,” King-Johnson said. “We got together through a group that was then called the social justice concerns committee. Long story short ... we formed what was called the Interfaith Hospitality Network.”

She said in the past churches and organizations would work together to house families on a rotating basis. They also had a day center where families could meet with their executive director and a case manager.

“We changed our name several years back to Family Promise because Family Promise is a national organization,” King-Johnson said. “We are one of the 200 affiliates that provide services to homeless families across the country. Many of them still house families in churches, but today we have a single fixed-site location.”

“As long as there is a minor child in the equation, then they’re eligible,” she said.

Family can stay up to 90 days. The goal to secure permanent housing before they leave the shelter.

Family Promise still partners with multiple churches that host dinners and provide other activities at the shelter. They also plan to have their volunteers take shifts at the new shelter on a rotating basis.

The staff consists of four people at the moment: King-Johnson, the shelter manager, the program assistant and weekend staff.

“We’re going to start with housing six families,” she said. “It could be anywhere from 30 to 36 individuals, depending on how many people are in the family. We have the ultimate capacity to house nine families in the facilities.”

Volunteers have been working recently on moving in things like beds and recently moved in living room furniture. The resource center is also finished now and has a large table for classes on topics like budgeting, parenting, nutrition and financial literacy.

“We do prevention diversion, where we support people so they don’t become homeless,” King-Johnson said. “When people graduate from our program into housing, we work with them for a year providing follow-up services to those folks who will be using this facility too.”

The shelter also works closely with the School District of Beloit, which recently identified 300-plus homeless families in the 53511 area code.

King-Johnson said she wants the community to understand that the lack of affordable housing has caused issues for many local families, even ones you wouldn’t think are struggling.

“Beloit has less than a 1% vacancy rate,” she said. “With the cost of rent increasing, the folks we’re seeing become in jeopardy of becoming homeless are not who people typically think. Anyone that’s paying more than 30% of their income toward their housing is at risk.”

It’s King-Johnson’s hope that the community can support each other during this housing crisis, and support the shelter as they continue to provide emergency housing.

These maps show the percentage of children who had completed by the age of 2 the traditional seven-vaccine series required for students to attend public schools in Wisconsin. The vaccines prevent a handful of infectious diseases, including diphtheria, tetanus, pertussis, polio, measles, mumps, rubella, Haemophilus influenza type B, hepatitis B, chickenpox and pneumococcal infections. In Rock County in 2018, 65.58% of children born in 2016 had completed the seven-vaccine series required to attend Wisconsin public schools. By 2021, that proportion had dropped to 63.59%. In Walworth County, those percentages were 69.7% in 2018 down to 68.57% in 2021.

Rock County infants aren’t as likely as before the COVID-19 pandemic to be fully vaccinated against diseases like diphtheria, polio and measles.

The decline follows a statewide trend, as Wisconsin infants are receiving their first vaccines at the lowest rate since 2013, analysis shows. The number of vaccine waivers submitted to Wisconsin schools, meanwhile, has more than doubled in the last 20 years.

Statewide, the seven-vaccine series, typically rolled out to children over the first 24 months of their lives, was completed by a record-high 72.93% of children in 2017, according to Wisconsin Immunization Registry data. That has since gradually fallen each year, down to 68.88% in 2021.

Each year of collected data corresponds to children born in two years prior to that year, so the 2021 data represents the proportion of infants born between Jan. 1, 2019 and Dec. 31, 2019 who are fully vaccinated.

The fact sheet also showed that the number of students behind schedule on their vaccines rose from about 2% in the 2019-20 school year to 2.9% in 2020-21, an issue that was exacerbated by COVID-19, Wisconsin Immunization Program manager Dr. Stephanie Schauer said.

“Many of the challenges due to the pandemic have resulted in fewer kids being up to date, and therefore being measured as behind schedule,” Schauer said. “We are concerned that when rates decline that means kids are not protected and as people are interacting and gathering more with others and kids are back to in-person learning, we will start to see more communicable diseases.”

At the county level, 14 of the state’s 72 counties had a decrease of over 7% in seven-vaccine series rates between 2018 to 2021, including Ashland, Clark, Douglas, Green, Green Lake, Jackson, Juneau, Lincoln, Menominee, Pepin, Price, Richland, Sawyer and Vilas. Menominee County had the largest decrease among all Wisconsin counties, falling from 62.65% in 2018 to 39.47% in 2021, a decline Schauer said is likely due to a small denominator.

“Small changes in the number of individuals can result in significant percentage changes,” Schauer said.

Jim Hurley has a knack for trapping animals. Not the nuisance kind but rather beloved pets that have gone missing.

Known as the “Dog Whisperer,” the founder of Hurley’s Animal Recovery Team is devoted to helping devoted families locate their pets and bring them home.

Hurley connects with clients largely through social media, where people will tag him via Facebook or other apps requesting his services.

He has over two decades of working with animals in many different capacities, including 24 years with the Rock County Humane Society.

After leaving the Humane Society, Hurley decided to step away from animals for a while. Six months later, though, he received a request to help the Rock County Sheriff’s Office search for a dog.

“I reluctantly and begrudgingly went out and got the dog,” Hurley said. “That kind of hooked me again into doing animal welfare.”

His process involves mapping locations where the animals have been sighted, looking for patterns of where they are eating and sleeping. From there, he creates a Google Map he shares with the owners and sets up animal traps and cameras to capture images of the pet.

Hurley said he is largely successful at locating and trapping pets, and is looking to expand his operation to train and include volunteers in his efforts.

In mid-May, Janesville native Tami Shaw and her family were reunited with their furry loved one after going nearly two weeks without their small dog.

On May 3, Shaw and her family were in Florida responding to a health emergency when they learned their 4-year-old Yorkie, Ferguson, had gone missing.

Nearly two weeks passed and Shaw sat down with her family to have a difficult conversation, as they began to believe a reunion wouldn’t happen. Shaw said Ferguson’s absence was devastating.

“Everybody was completely heartbroken knowing that he was out there running [and] we didn’t know where he was sleeping, getting food or water,” she said. “Lots of tears were shed—lots of sleepless nights.”

Shaw said sightings of Ferguson were sporadic and added to the emotional roller coaster, but Hurley assured them he would find their dog. He advised them that the best route to take was to stay home and let him take the search reins.

“He tried to reassure us to trust in his process,” Shaw said. “He assured me ‘It’s going to be OK.’”

Then, on the evening of May 14, Hurley called the Shaw family to tell them their pet had been trapped. Hurley got the news as he was attending a benefit function and left it to go tend to Ferguson.

“He sat in his dress clothes and everything, in the dirt, trying to comfort our pup,” Shaw said.

In the weeks since, Shaw says Ferguson has returned to his normal weight and is as boisterous as ever.

Though he works a full-time job as kennel manager for Rockford-based Winnebago County Animal Services, Hurley still finds the time to rescue animals and has traveled halfway across the country to do so.

He recalled once being asked to move two dogs who’d been removed from abusive owners. That took him to an animal sanctuary in Kanab, Utah.

“It was neat, except I got food poisoning and it was a long drive to get back home,” Hurley recalls.

Ultimately, he said the job is rewarding but admits he also has a love and hate relationship with it.

“Is it rewarding? Yes. Frustrating? Yes,” Hurley said. “But I have that drive and connection to do it.”