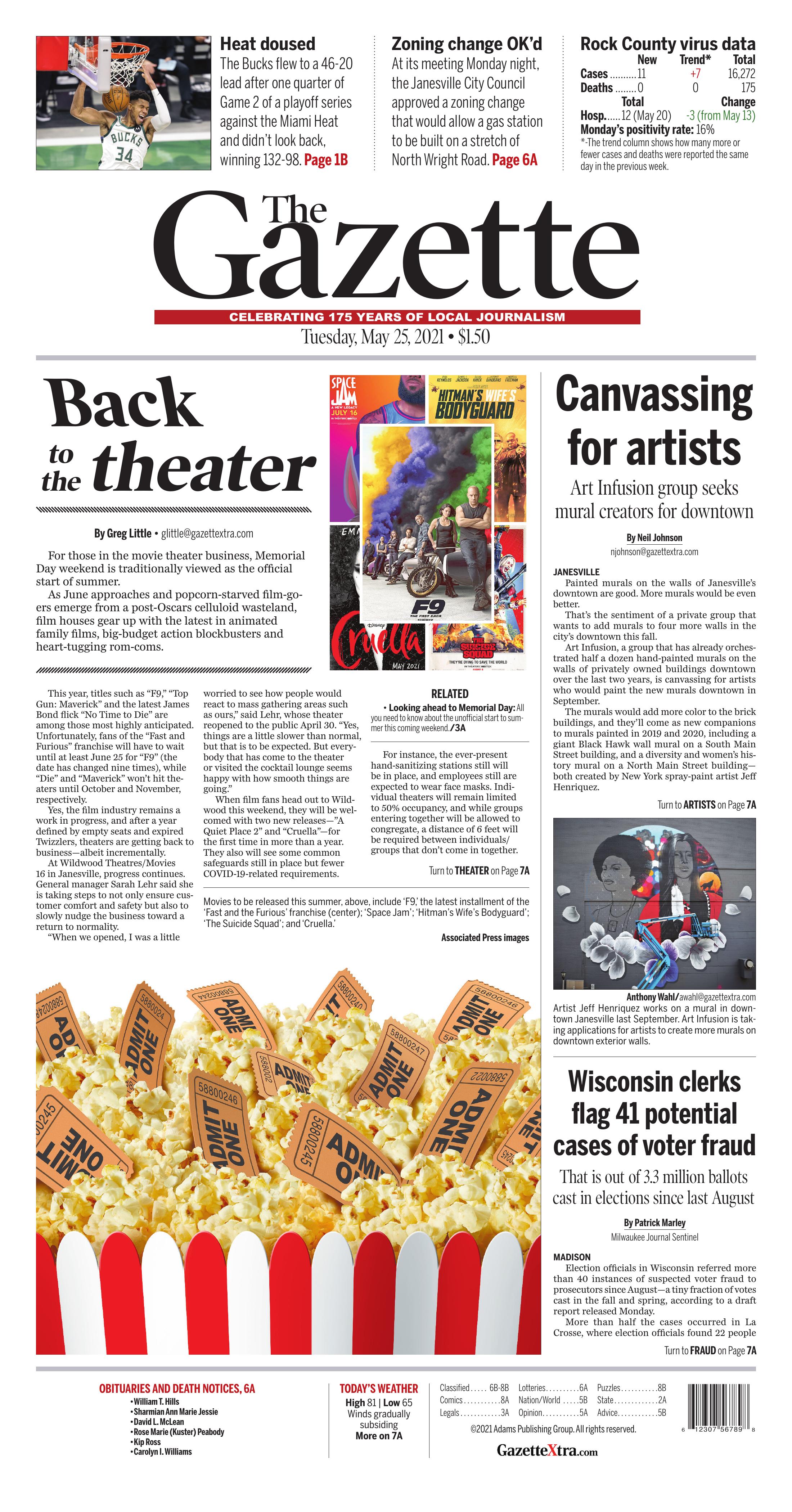 Back to the theater

For those in the movie theater business, Memorial Day weekend is traditionally viewed as the official start of summer.

As June approaches and popcorn-starved film-goers emerge from a post-Oscars celluloid wasteland, film houses gear up with the latest in animated family films, big-budget action blockbusters and heart-tugging rom-coms.

This year, titles such as “F9,” “Top Gun: Maverick” and the latest James Bond flick “No Time to Die” are among those most highly anticipated. Unfortunately, fans of the “Fast and Furious” franchise will have to wait until at least June 25 for “F9” (the date has changed nine times), while “Die” and “Maverick” won’t hit theaters until October and November, respectively.

Yes, the film industry remains a work in progress, and after a year defined by empty seats and expired Twizzlers, theaters are getting back to business—albeit incrementally.

At Wildwood Theatres/Movies 16 in Janesville, progress continues. General manager Sarah Lehr said she is taking steps to not only ensure customer comfort and safety but also to slowly nudge the business toward a return to normality.

“When we opened, I was a little worried to see how people would react to mass gathering areas such as ours,” said Lehr, whose theater reopened to the public April 30. “Yes, things are a little slower than normal, but that is to be expected. But everybody that has come to the theater or visited the cocktail lounge seems happy with how smooth things are going.”

When film fans head out to Wildwood this weekend, they will be welcomed with two new releases—”A Quiet Place 2” and “Cruella”—for the first time in more than a year. They also will see some common safeguards still in place but fewer COVID-19-related requirements.

For instance, the ever-present hand-sanitizing stations still will be in place, and employees still are expected to wear face masks. Individual theaters will remain limited to 50% occupancy, and while groups entering together will be allowed to congregate, a distance of 6 feet will be required between individuals/groups that don’t come in together.

For those purchasing tickets online, there is no need to formulate if proper distance will be maintained. Only seats guaranteed to be at least 6 feet from other open spots will be available.

One of the more notable changes will involved masking, as Lehr said the choice of whether or not to wear them will be left up to individual patrons. The decision is based on Rock County Health Officer Katrina Harwood recently lifting the order requiring individuals to wear face coverings.

“The mandate came out last week, and I feel that at this point, there are a lot of people who might be vaccinated,” Lehr said. “They did that for a reason, and I don’t feel that if they went to that extent of taking care of themselves they should be required to (wear a mask).”

Another change centers on concessions, as soda and popcorn buyers now will be allowed to retrieve their own refills.

“Our Pepsi machine is a non-touch machine. You put the cup down on a sensor, and it automatically fills,” Lehr said. “And the only things people touch on the popcorn machine are a lever that dispenses popcorn and a button for the butter. There will be sani-wipes by the machines along with hand sanitizer, and employees will be going back regularly to wipe down those touch points.”

Those who visit Wildwood’s cocktail lounge over Memorial Day weekend also will get an added bonus: a guest pass for two to a 2D or 3D movie with the first cocktail purchased (one pass per person). In addition, those buying a No. 2 combo (two medium drinks and a large popcorn) at the concession stand will get a coupon from Mac’s Pizza Shack, 2307 Milton Ave.

After nearly a month since Wildwood initially reopened, Lehr is encouraged the theater is taking the proper steps to operate safely.

“We haven’t had any complaints or concerns, which is great,” she said. “It’s a situation where people haven’t been here for a while, and I don’t want to hold anything back. I want things to be back to normal as best they can be.

“With the steps we are taking, we’re hoping word gets out that (Wildwood) is an OK place to go.”

Milwaukee artist David Mark Zimmerman, who goes by the artist name Bigshot Robot, outlines the items in his mural while working on the read corner of 215 W. Milwaukee St. in downtown Janesville in September 2020. A private group is commissioning four more murals downtown this fall and is seeking mural pitches from artists around the U.S.

Painted murals on the walls of Janesville’s downtown are good. More murals would be even better.

That’s the sentiment of a private group that wants to add murals to four more walls in the city’s downtown this fall.

Art Infusion, a group that has already orchestrated half a dozen hand-painted murals on the walls of privately owned buildings downtown over the last two years, is canvassing for artists who would paint the new murals downtown in September.

According to a news release, Art Infusion has $15,250 in privately donated stipends lined up to commission the works.

Last year, a few Milwaukee artists and a pair of Janesville artists created four other distinct murals downtown. The painters transformed walls with a whimsical, stylized blue dog, origami birds, carousel horses and an impressionistic wall of waves meant to symbolize a city and its people moving forward.

Nigella Ryan, one of the lead coordinators of the mural program, said this year Art Infusion is looking for artists from all over the U.S. to tackle the new murals.

“We’ve thrown the whole thing open to anybody within the continental United States. We’ll see what we get,” Ryan said.

They will be painted during the week of Sept. 4-12. Anyone who wants to submit a mural pitch to Art Infusion can do so by visiting the Art Infusion event page on the Janesville Convention & Visitors Bureau website and registering by June 20.

Earlier this year, Art Infusion sought bids for spaces that could fit four more murals. The group announced Monday it has chosen these four spaces for the new murals:

A sign-up coordinated through the Janesville Convention & Visitors Bureau explains that the Art Infusion jury that judges mural pitches will give preference to “positive, empowering images” or concepts that outline local history or the surrounding natural setting of Janesville.

Election officials in Wisconsin referred more than 40 instances of suspected voter fraud to prosecutors since August—a tiny fraction of votes cast in the fall and spring, according to a draft report released Monday.

More than half the cases occurred in La Crosse, where election officials found 22 people had registered to vote using the address of a UPS Store instead of their homes.

In all, the state Elections Commission identified 41 instances in which municipal clerks alerted district attorneys they suspected voter fraud. They included cases of felons voting, people voting twice and people voting in the wrong municipality.

The 41 cases represent a vanishingly small fraction of a percent of ballots cast in elections since August. About 3.3 million Wisconsinites voted in November alone.

“Election officials and law enforcement across Wisconsin work together proactively to prevent, identify and prosecute suspected cases of voter fraud,” said a statement from Meagan Wolfe, the director of the Elections Commission. “As we report these statistics to the Legislature, we want the public to understand that we take these matters seriously.”

The commission’s draft report identifies cases that have been turned over to district attorneys but not what happened after that.

The findings were in line with an Associated Press report from Friday that found about two dozen suspected fraud cases stemmed from the November election. No charges have yet been filed, according to AP.

La Crosse County District Attorney Tim Grueneke said he was looking into what happened in La Crosse. Some of the problems might have already been resolved by clerks or law enforcement officials, he said by email.

Wisconsin allows residents to register to vote through an online portal, but to register that way people must use the address that is on their driver’s license or state identification card.

People can use a UPS Store or other commercial address for their driver’s license. However, they can’t use such an address for their voter registration. Some people in La Crosse appear to have done that, according to Reid Magney, a spokesman for the Elections Commission.

In Brookfield, a woman is suspected of voting in 10 elections since 2017 even though she had dementia and been deemed incompetent for the purpose of voting, according to Magney.

Waukesha County District Attorney Susan Opper did not immediately respond Monday to questions about the incident.

Separately, the commission issued a draft report Monday that showed district attorneys had been alerted to 10 cases since early 2020 in which felons are suspected of having voted. Wisconsin law bars someone from voting while they are serving a sentence for a felony, including their time on probation or extended supervision.

Other cases of possible felon voting are being investigated, Magney said.

The commission, which consists of three Republicans and three Democrats, will review the draft reports at a June 2 meeting.

Democratic state Rep. Mark Spreitzer of Beloit said the findings show voter fraud is rare and is flagged when it is suspected.

“There is not a systemic security problem,” said Spreitzer, who sits on the Assembly Campaigns and Elections Committee. “I think we can have a high degree of confidence in our elections that the will of the electorate prevails.”

Republican Rep. Joe Sanfelippo of New Berlin said he is focused on the actions of election officials, not voters.

Sanfelippo, who also sits on the Assembly elections committee, accused the Elections Commission of violating a law that requires sending poll workers known as special voting deputies to nursing homes to assist with voting. The commission advised clerks not to send the voting deputies to those facilities and instead send residents absentee ballots because of the coronavirus pandemic.

“They clearly do not have the authority to circumvent state statute,” Sanfelippo said of the commissioners who voted for that guidance.

“They should not be on the board,” he added. “I don’t care if they’re Democratic appointees or Republican appointees.”

All six commissioners voted not to send deputies to nursing homes for the spring 2020 election. Five of the six voted to keep that policy in place in the fall, with Republican Commissioner Bob Spindell dissenting.

Asked how he could get members off the commission, Sanfelippo said, “I’m working on it.”

Ann Jacobs, the chairwoman of the commission and a Democrat, noted state law does not spell out what the state is supposed to do when nursing homes won’t allow visitors for health reasons.

“I think that the commission acted unanimously in the interest of Wisconsin voters to ensure our vulnerable nursing home residents were able to safely and legally exercise their right to vote,” she said.