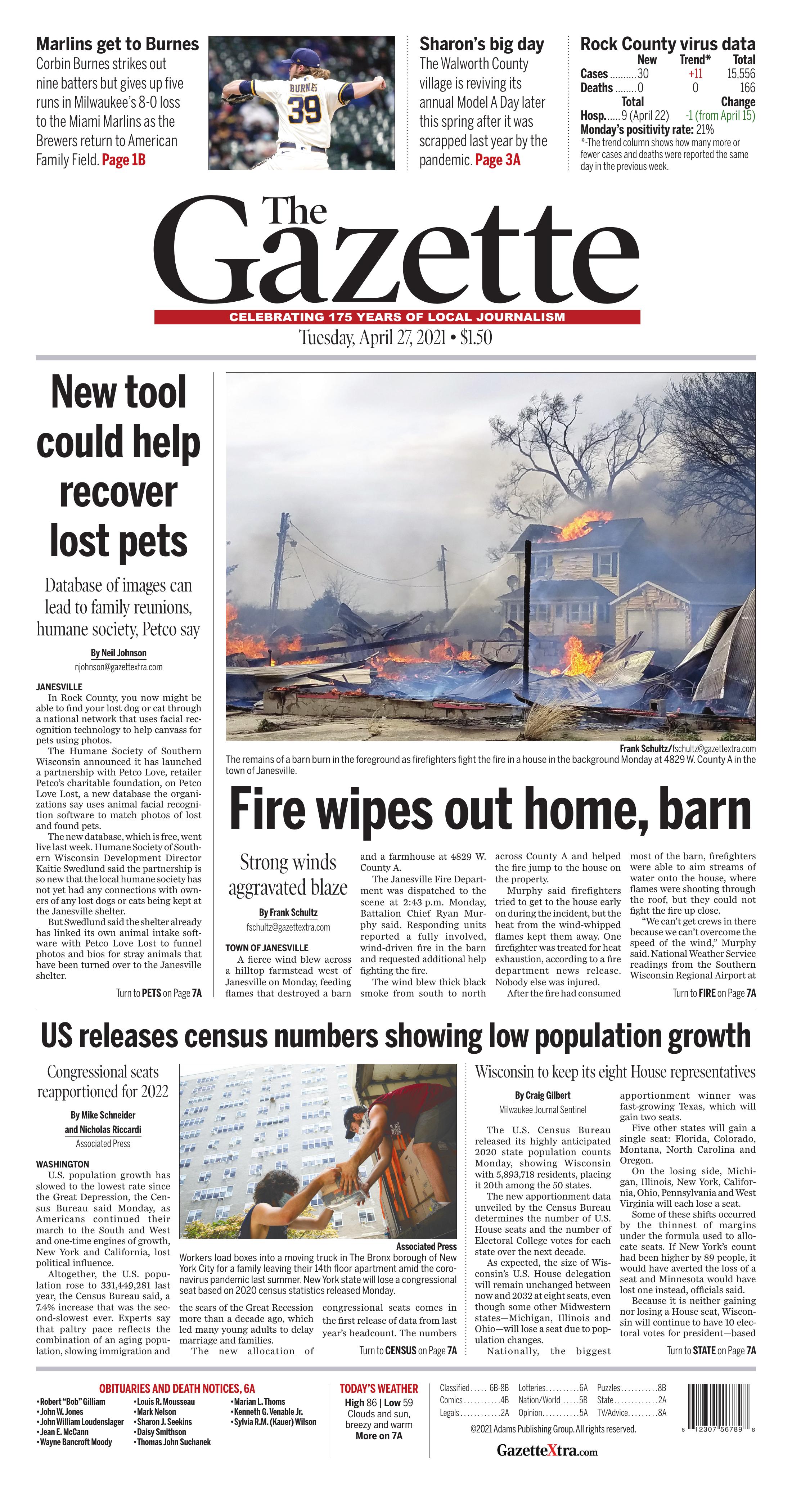 Janesville firefighters work to save a house on County A west of Janesville that caught fire while a barn was burning down Monday in windy conditions. County A was closed to traffic as firefighters from departments around the county delivered water.

The remains of a barn burn in the foreground as firefighters fight the fire in a house in the background Monday at 4829 W. County A in the town of Janesville.

Janesville firefighters use their breathing gear at a fire on County A west of Janesville that spread from a barn to a house Monday. County A was closed to traffic. The wooden barn was a total loss.

Firefighters train their hose on a burning farmhouse at 4829 W. County A, town of Janesville, on Monday as sunlight filters through the smoke

Firefighters try to save a farmhouse on West County A in the town of Janesville on Monday. Fire later ravaged the house’s second story.

A fierce wind blew across a hilltop farmstead west of Janesville on Monday, feeding flames that destroyed a barn and a farmhouse at 4829 W. County A.

The wind blew thick black smoke from south to north across County A and helped the fire jump to the house on the property.

Murphy said firefighters tried to get to the house early on during the incident, but the heat from the wind-whipped flames kept them away. One firefighter was treated for heat exhaustion, according to a fire department news release. Nobody else was injured.

After the fire had consumed most of the barn, firefighters were able to aim streams of water onto the house, where flames were shooting through the roof, but they could not fight the fire up close.

“We can’t get crews in there because we can’t overcome the speed of the wind,” Murphy said. National Weather Service readings from the Southern Wisconsin Regional Airport at the time of the fire showed wind speeds of 20 mph with gusts up to 40 mph.

Pieces of siding on the house and an attached garage melted, hanging like rags in the wind.

Both structures were total losses, as were a vehicle, two boats and a camper trailer. The estimated total cost of the losses was $500,000. The cause of the fire was not determined after investigation, according to the news release.

Chris Zimborski said he and his father, James Combs, were remodeling part of the house’s interior when he noticed the blaze.

“I looked out the window, and it was just black smoke,” he said.

Zimborski went outside and saw someone with a hose spraying the fire on the side of the barn.

Zimborski said he called to his father, telling him to call 911.

The 4800 block of County A was closed until about 7:45 p.m. as fire departments from around the county took turns delivering water to fight the fires. Assisting departments included Beloit, town of Beloit, Clinton, Footville, Evansville, Edgerton, Milton and town of Turtle, according to the release. In all, 46 firefighters were at the scene. The Rock County Sheriff’s Department and Rock County Rural electric also responded to the fire.

In Rock County, you now might be able to find your lost dog or cat through a national network that uses facial recognition technology to help canvass for pets using photos.

The new database, which is free, went live last week. Humane Society of Southern Wisconsin Development Director Kaitie Swedlund said the partnership is so new that the local humane society has not yet had any connections with owners of any lost dogs or cats being kept at the Janesville shelter.

But Swedlund said the shelter already has linked its own animal intake software with Petco Love Lost to funnel photos and bios for stray animals that have been turned over to the Janesville shelter.

The humane society is one of more than 800 shelters nationwide that have joined the Love Lost platform.

She said the humane society hopes the new technology and partnership with Petco will help add to the 137 lost pets the group has reunited with their owners so far this year.

“It’s one more avenue for people to look for their lost pets. People can go on that website and say, ‘I lost my pet,’ enter a little bit of information about their pets, upload a photo, and then the algorithm gets right to work and tries to match their pet with potential matches in their area.”

Swedlund said the humane society’s testing of the Love Lost database and app shows it works to match up pets based on biometric photograph technology similar to what police use to find missing people.

The system works to match up owners’ pet photos with photos uploaded to the same database by people who have found lost animals.

“It gives people contact information and how to get a hold of the people who’ve found their pets. These people could just be average community members or they could be organizations or rescues, as well,” Swedlund said.

On Monday, the Humane Society of Southern Wisconsin had several animals at the Janesville shelter listed on Love Lost, including a young pit bull. The photo uploaded to Love Lost shows the dog has a distinctive white marking between its eyes and white paws.

If an owner plugged a photo of the same dog into the Love Lost database, it might match up with the humane society’s photo based on the dog’s breed, its unique markings and general appearance.

Pet owners are able to upload photos of their pets with descriptions that list the pets’ age, sex and disposition. Those photos are stored in the database and can be used to post an alert and track a pet if it goes missing. 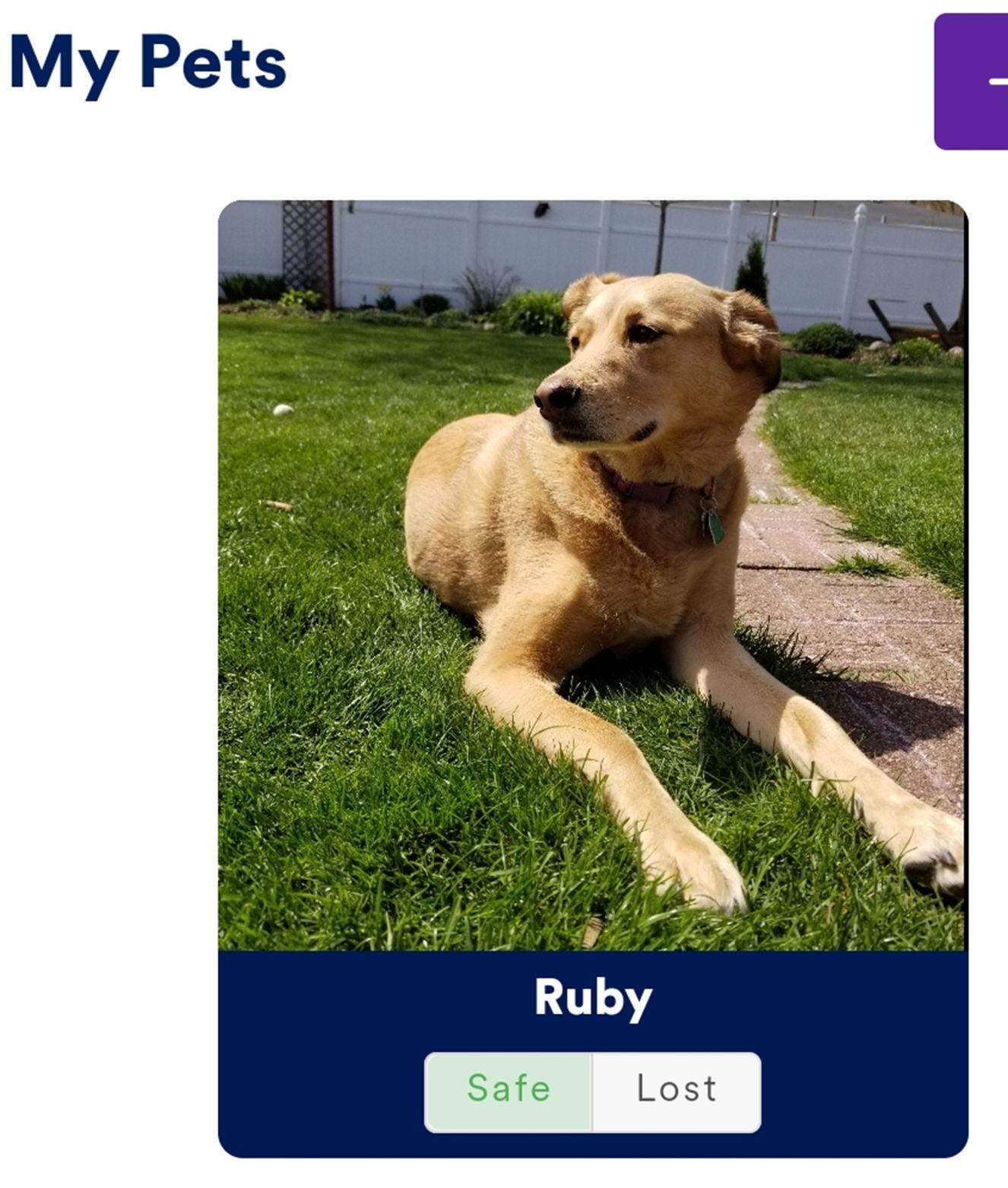 Part of the interface of Petco’s Love Lost service. The company says it uses facial recognition technology to reunite owners with lost pets.

A Gazette reporter on Monday uploaded a photo of his family dog and cat with descriptions of their age and sex and marked the pets in the database as “safe”—meaning they were both safe at home and not lost. If they ever do run off, the reporter could designate the animal as “lost,” telling the software to keep a lookout for a matching image to be added to the database.

Both the local humane society and Petco report that having microchips implanted is important because they said data shows only about 20% of nonmicrochipped pets are ever reunited with their owners.

Chipped pets, on the other hand, are reunited with owners more than two and a half times as often—about 52% of the time, the groups said.

Petco Love advises that anyone encountering a stray dog or cat should carry a leash and stay calm. People should try to lure the animal with food or a treat and avoid running toward the animal or chasing it.

The new apportionment data unveiled by the Census Bureau determines the number of U.S. House seats and the number of Electoral College votes for each state over the next decade.

As expected, the size of Wisconsin’s U.S. House delegation will remain unchanged between now and 2032 at eight seats, even though some other Midwestern states—Michigan, Illinois and Ohio—will lose a seat due to population changes.

Nationally, the biggest apportionment winner was fast-growing Texas, which will gain two seats.

On the losing side, Michigan, Illinois, New York, California, Ohio, Pennsylvania and West Virginia will each lose a seat.

Some of these shifts occurred by the thinnest of margins under the formula used to allocate seats. If New York’s count had been higher by 89 people, it would have averted the loss of a seat and Minnesota would have lost one instead, officials said.

Because it is neither gaining nor losing a House seat, Wisconsin will continue to have 10 electoral votes for president—based on its eight House seats and two U.S. Senate seats.

The nation as a whole grew at a much higher rate of 7.4%, but that was the country’s lowest growth rate in decades.

The Midwest region had a lower growth rate than the Northeast, West or the South, which had the highest regional growth rate from 2010 to 2020 (10.2%).

Illinois was one of just three states to lose population, along with West Virginia and Mississippi.

The data released Monday only include statewide population counts. While they illustrate how population growth has varied from state to state over the past decade, they don’t include any data on population trends within states.

That data, which is needed for each state’s redistricting process, will be released later in the year.

At the time of the 2010 census, Wisconsin’s congressional districts were crafted to have roughly equal populations of around 712,000.

It’s clear from recent population estimates that the state’s eight districts have grown at different rates since then.

One of them—the very Democratic Fourth District that includes the city of Milwaukee—has actually shrunk in population, according to the Census Bureau’s 2019 American Community Survey.

According to those earlier estimates, Wisconsin’s biggest growth district by far over the past decade is the very Democratic Second District that includes Dane County. Its estimated 2019 population was almost 774,000, much larger than it can be under the new district lines.

The heavily Republican Fifth District outside Milwaukee and the GOP-leaning Eighth District that includes Green Bay also appear to have grown faster than the state as a whole, based on past population estimates, though they haven’t grown nearly as fast as the Second District. That means they, too, will have to get a little smaller geographically in redistricting.

The state’s five other districts appear to have grown more slowly than the state as a whole, meaning they will have to get a little bigger geographically.

Wisconsin last saw a change in the number of its U.S. House seats after the 2000 Census, when it went from nine seats to eight seats.

Prior to that, Wisconsin lost a House seat after the 1970 Census, dropping from 10 to nine.