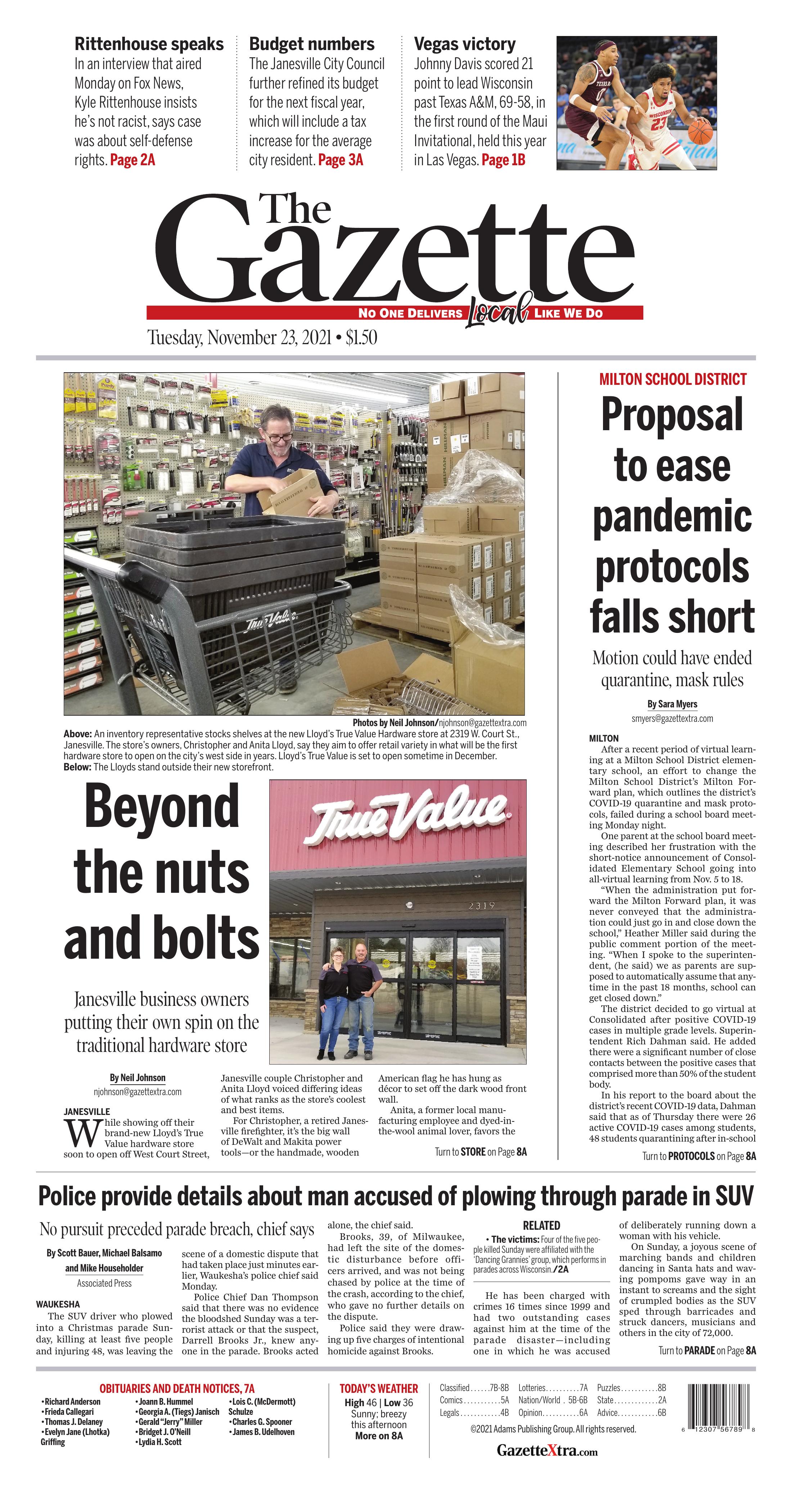 An inventory representative stocks shelves at the new Lloyd's True Value Hardware store at 2319 W. Court St. The store's owners, Christopher and Anita Lloyd, say they aim to offer retail variety in what will be the first hardware store to open on the city's west side in years. Lloyd's True Value is set to open sometime in December.

Janesville couple Christopher and Anita Lloyd pose in front of their new hardware store, Lloyd's True Value Hardware, on West Court Street in Janesville. The store, which opens in December, is the first new hardware store to launch on the city's west side since the early 1980s.

Janesville couple Christopher and Anita Lloyd pose in front of their new hardware store, Lloyd’s True Value Hardware, on West Court Street in Janesville. The store, which opens in December, is the first new hardware store to launch on the city’s west side since the early 1980s.

While showing off their brand-new Lloyd’s True Value hardware store soon to open off West Court Street, Janesville couple Christopher and Anita Lloyd voiced differing ideas of what ranks as the store’s coolest and best items.

For Christopher, a retired Janesville firefighter, it’s the big wall of DeWalt and Makita power tools—or the handmade, wooden American flag he has hung as décor to set off the dark wood front wall.

That, she said, is one touch she added to the new store.

That’s where Christopher cuts in, his eyes twinkling.

Chris and Anita Lloyd are new to retail, but the couple says they’ve been trying to open a hardware store in Janesville off and on since 2007.

Most recently, in 2017, the couple had made a bid on the former True Value franchise on Center Avenue on Janesville’s south side when that store was planning to shut down.

Two years later, they started pursuing the build out of this new True Value franchise on a West Court Street lot next door to the Daniels Foods supermarket. The new store is almost fully fleshed out and slated to open sometime in December.

What the couple has ranks as unique for Janesville’s west side.

For one, Lloyd’s True Value will be the first standalone hardware store to open on the West Court Street commercial strip, known as the Westgate Corridor, since the early 1980s.

The new shop’s physical curb appeal—a dark red, steel façade with a prairie-style carved stone front entryway—is something the couple said they carefully crafted to grab the eye of people driving by.

Overall, it’s the first new retail business to be built from the ground up on the west side since before the COVID-19 pandemic hit in 2020.

Christopher Lloyd said that he saw small business financing deals for his project fall through a few times during the pandemic—an irony considering the number of businesses locally that have been able to cash in on federal COVID-19 relief loans.

The delays and hiccups might have been a blessing in disguise. The Lloyds said that True Value officials told him that had the store launched a year ago, it’s likely that suppliers would have been able to stock only about 65% of all inventory that the store aims to carry.

As of late November, Christopher Lloyd said the supply chain picture has brightened. Overall, he said True Value expects its supply chain to be able to deliver about 90% of the new store’s planned inventory.

Along with being the only hardware store within 2 miles of Janesville’s west and south business corridors, Lloyd thinks his new store might scratch the pesky—and growing—itch of consumer impatience.

“My kids are still mainly Amazon shoppers. But with that online buying, the days of you getting your goods within one or two days, it’s kind of gone. It’s not that way right now,” Christopher Lloyd said. “Now you’re waiting two, three weeks. So that’s driving people back to the (brick-and-mortar) stores some because they need what they need now, not a month from now.”

The term “variety store” might be outdated, but Anita said customers should expect to find items at Lloyd’s True Value that they might not see at other hardware stores, such as plants, décor and knickknacks.

Anita said she has dedicated a full store aisle to pet toys and bird feeders in part because residents on the south and east side said they had gotten sick of traveling across town to buy such items at big-box stores.

“On the west side and south side of town, there was a pharmacy that used to carry cute little knickknacks and stuff like that. I collected angels that they had, and they had the best selection of knickknacks, flower arrangements and things like that. For some reason, they went away from it. That was just so sad, it was just disappointing,” she said. “We’re going to bring that back over to this side of town.”

One parent at the school board meeting described her frustration with the short-notice announcement of Consolidated Elementary School going into all-virtual learning from Nov. 5 to 18.

“When the administration put forward the Milton Forward plan, it was never conveyed that the administration could just go in and close down the school,” Heather Moore said during the public comment portion of the meeting. “When I spoke to the superintendent, (he said) we as parents are supposed to automatically assume that anytime in the past 18 months, school can get closed down.”

The district decided to go virtual at Consolidated after positive COVID-19 cases in multiple grade levels. Superintendent Rich Dahman said. He added there were a significant number of close contacts between the positive cases that comprised more than 50% of the student body.

The superintendent did not recommend changing COVID-19 protocols Monday night but said it could be considered at the next board meeting Dec. 13. Dahman said the district wants to see if more students in the 5-to-11 age range get vaccinated and if case rates go down as a result.

Dave Holterman said he agreed with parts of Hubert’s proposal but was concerned about the younger age group and its access to the vaccines. Holterman, who said his young son was recently vaccinated, had issues trying to find a vaccination site.

Board member Shelly Crull-Hanke was concerned that upcoming holiday breaks could lead to increases in COVID-19 cases and said she would rather err on the side of safety. Board member Jennifer Johns also had a major issue with eliminating the quarantine protocols.

“This virus is contagious, we’ve seen it’s extremely contagious,” Johns said. “So eliminating quarantine altogether, regardless of vaccination status, is not something that I will be supportive of at all.”

Board member Joe Martin offered an amendment to the motion to keep the quarantine protocols in place.

School board President Mike Hoffman was not at Monday’s meeting.

Two Milton School Board members will be up for reelection on April 5, 2022. Members Rick Mullen and Leslie Hubert’s seats will be up for grabs. The district’s executive assistant Kim Krause spoke briefly about the election and key upcoming dates for those interested in running.

People who want to run for school board must file a campaign statement, declaration of candidacy and signed nominated papers by 5 p.m. Jan. 4, 2022, at the Milton School District office, 448 E. High St.

Dec. 1 is the first day to circulate nomination papers. Those papers can be obtained at the Milton School District office between 8 a.m. and 4 p.m. Mondays through Thursdays and 8 a.m. to 3:30 p.m. Fridays. A primary election would be held Feb. 15, 2022, if needed.