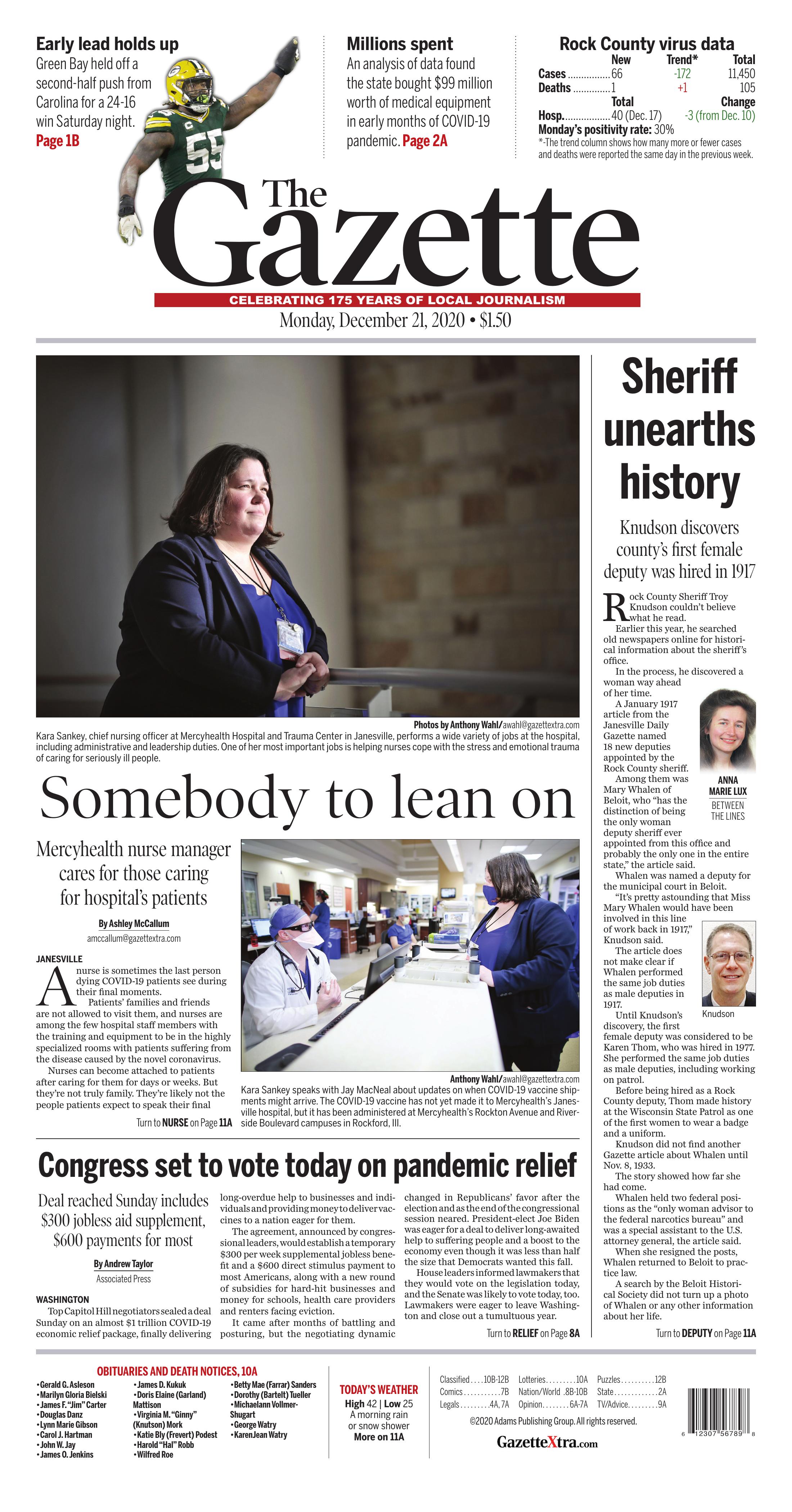 Kara Sankey, chief nursing officer at Mercyhealth Hospital and Trauma Center in Janesville, performs a wide variety of jobs at the hospital, including administrative and leadership duties. One of her most important jobs is helping nurses cope with the stress and emotional trauma of caring for seriously ill people.

A nurse is sometimes the last person dying COVID-19 patients see during their final moments.

Patients’ families and friends are not allowed to visit them, and nurses are among the few hospital staff members with the training and equipment to be in the highly specialized rooms with patients suffering from the disease caused by the novel coronavirus.

Nurses can become attached to patients after caring for them for days or weeks. But they’re not truly family. They’re likely not the people patients expect to speak their final words to or see before they close their eyes for the last time.

Many days during the pandemic are somewhat normal for nurses. But other days are emotionally traumatic, filled with the pain of watching someone die.

Those days are hard to forget, said Kara Sankey, chief nursing officer at Mercyhealth Hospital and Trauma Center in Janesville.

“Not every day is like that, but there are some days,” Sankey said. “Those days are really, really challenging. Even one of those days can stick with a nurse for a very long time.” 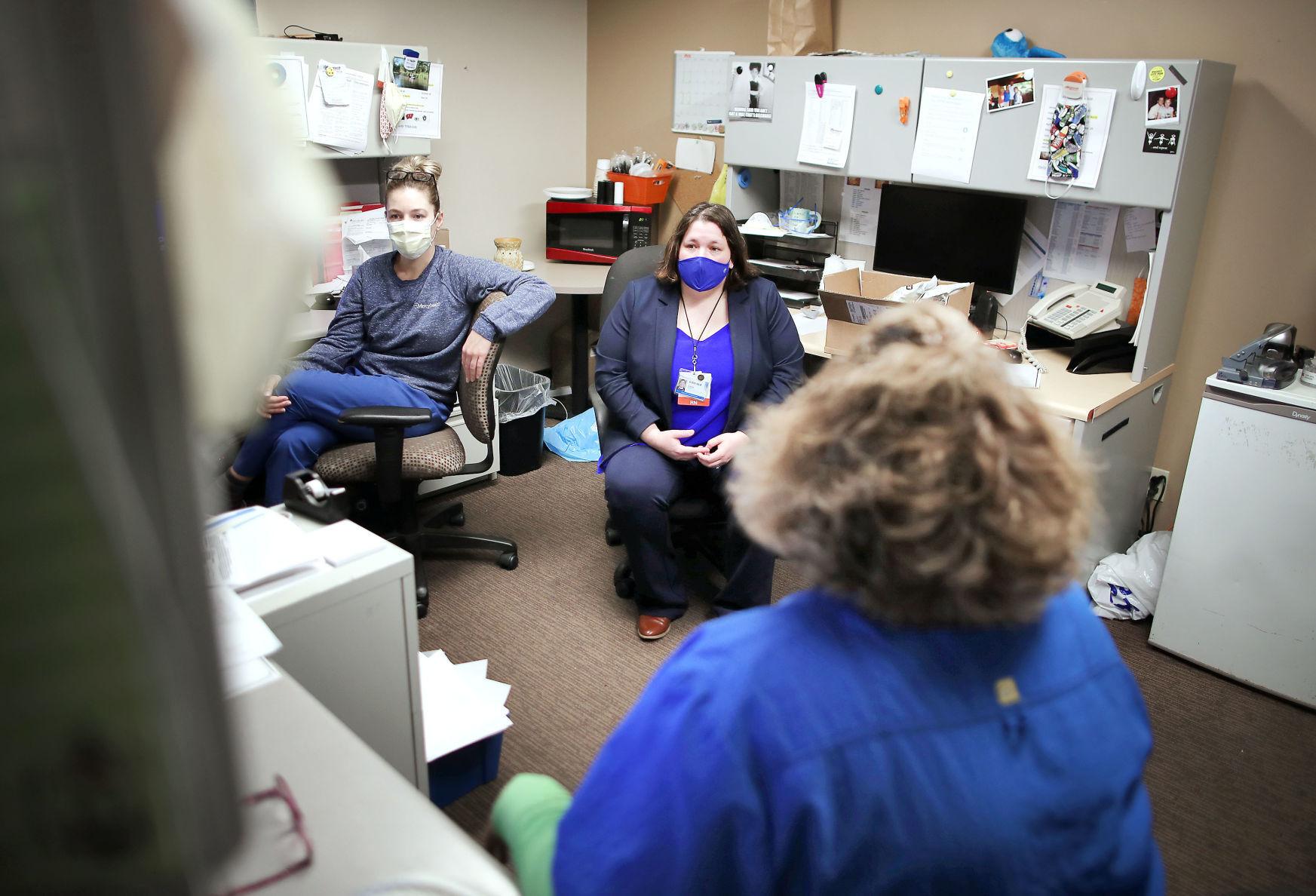 Rock County’s health care systems continue to be stressed amid the pandemic.

Locally, the number of COVID-19 cases, hospitalizations and deaths soared this fall, peaking in mid-November. At the peak, 74 people were hospitalized.

Before the pandemic, Sankey’s job was to set goals and coordinate plans for the hospital’s nurses.

The pandemic forced her to manage day-to-day operations, coordinating communications and dealing with “chaos” to make sure every unit is covered and medical staff have what they need, she said. 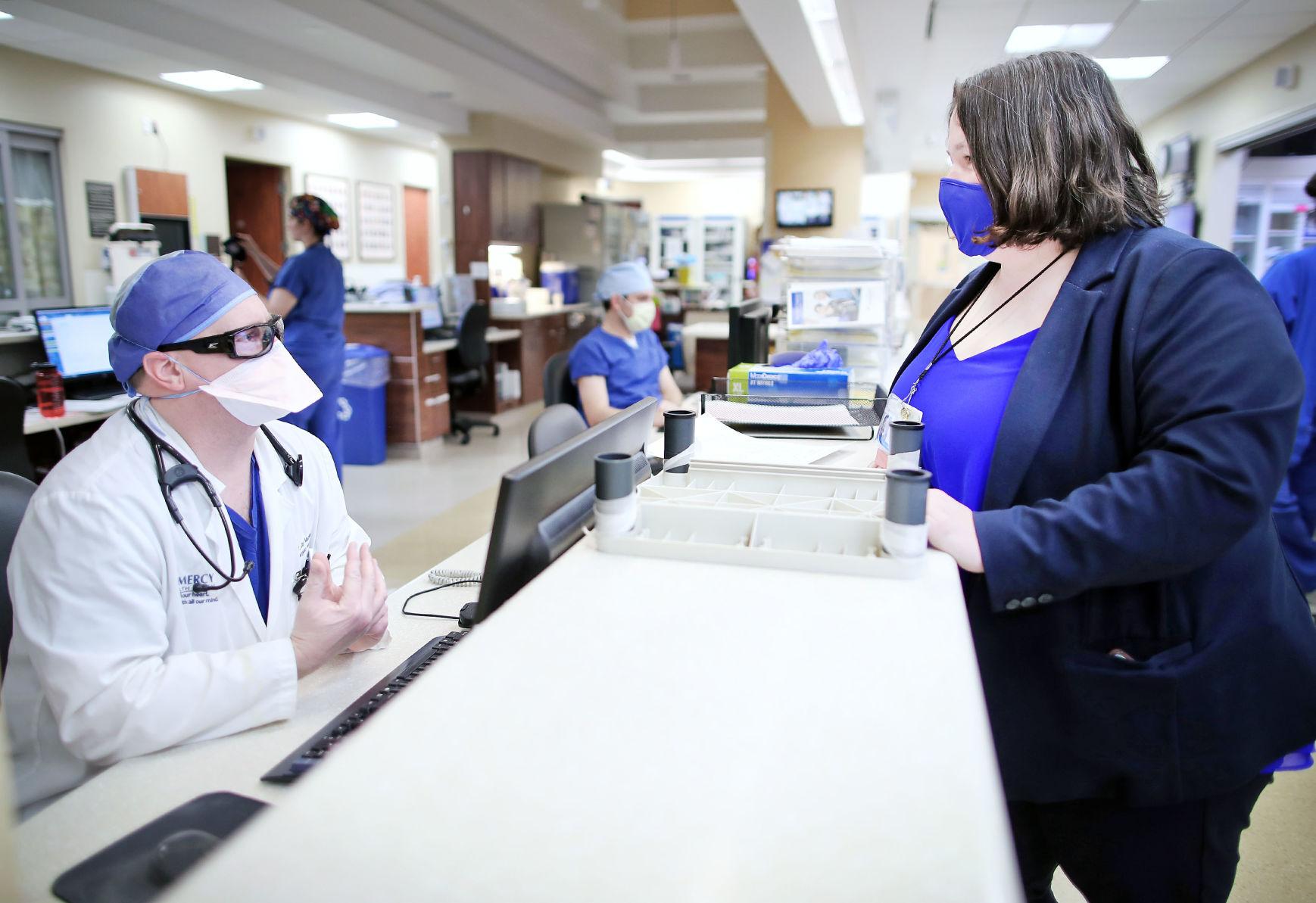 Kara Sankey, chief nursing officer at Mercyhealth Hospital and Trauma Center, Janesville, speaks with Jay MacNeal about updates on when COVID-19 vaccine shipments might arrive. The COVID-19 vaccine has not yet made it to Mercyhealth's Janesville hospital, but it has been administered at the Rockton Avenue and Riverside Boulevard campuses in Rockford, Illinois.

One of her most important jobs is one that has always existed but has become amplified this year: supporting nurses emotionally and making sure their needs are met.

Sankey said the most important thing she can do to help nurses cope with stress and emotional trauma is to listen.

“Self care is important, but now more than ever, we have to really pay attention to what staff are saying,” she said. “It is deep.”

Sankey is humble and doesn’t complain about the additional duties. She knows there is only so much she can do, and she is constantly prioritizing to make sure things run as smoothly as possible.

“I spend a lot of time with them (nurses). I let them talk about it. We find the critical issue, where is the issue, and start working through that,” she said.

“Sometimes they just need to talk about it and have you understand.”

Resources are available if a nurse or staff member needs additional help, Sankey said, and she can refer her staff to those resources.

Sankey encourages nurses to celebrate when their patients go home or when they get transitioned to a lower level of care.

“There is not a party or anything like that, but nurses talk and share so others know good things are happening,” she said. “... And they really are genuinely happy to hear that. They share that. It gives them hope.” 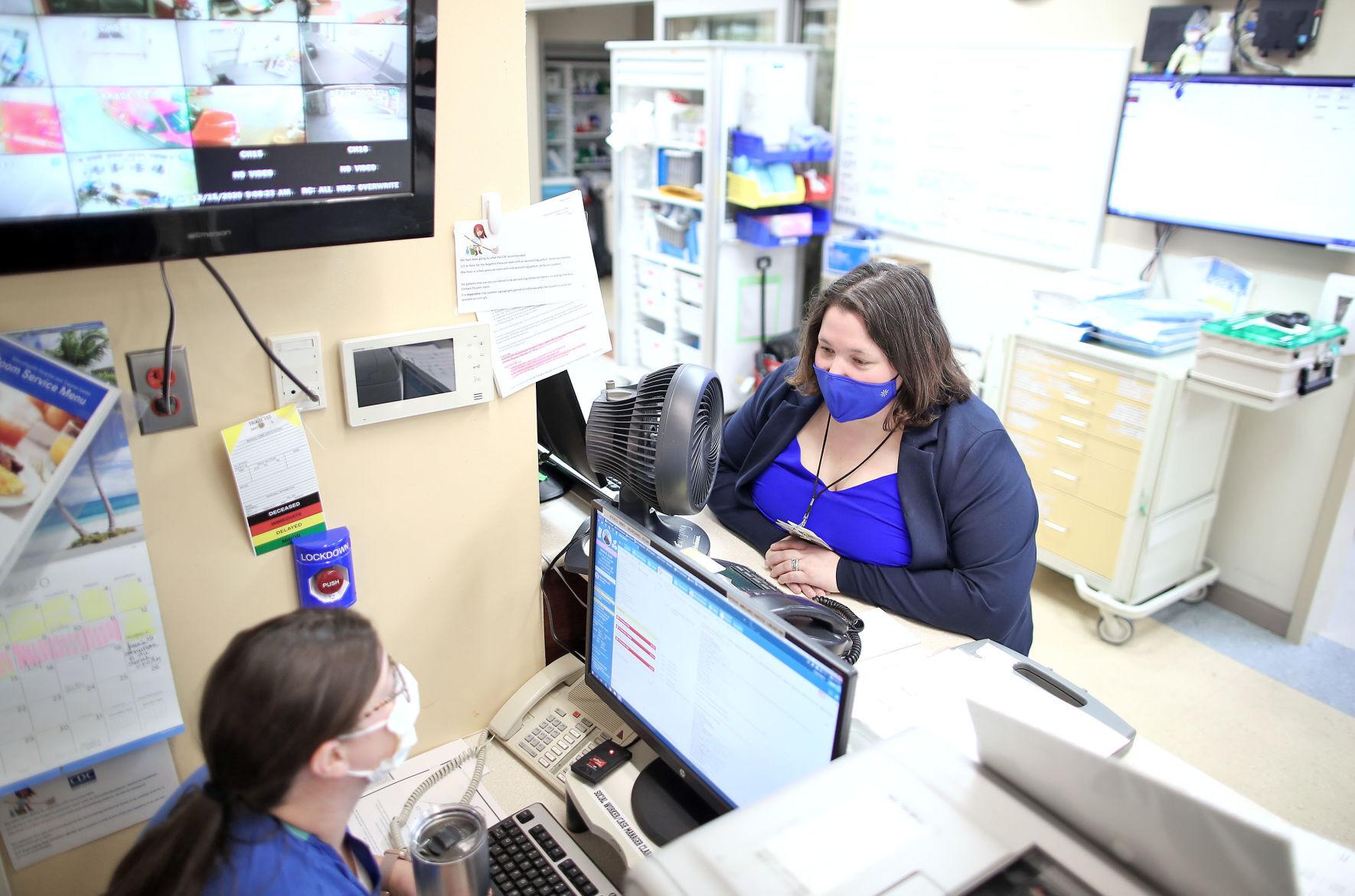 Chief nursing officer Kara Sankey checks in with the charge nurse during her daily rounds at Mercyhealth Hospital and Trauma Center in Janesville. Sankey plays many roles at the hospital, including making sure that nurses are getting the help they need.

There is no job Sankey won’t jump into and help with when needed. Leadership means helping out in any way you can—whether that means taking on patients, working night shifts or even mopping floors, she said.

The strained health care system—locally, the biggest struggle is adequate staffing—forces Sankey to be creative.

“Prior to COVID, if we would change or do major changes to model our units, we would have months to prepare,” Sankey said.

“What this (pandemic) has done is sometimes you have four hours to prepare.”

The hospital must regularly build or move units to accommodate both the COVID-19 and non-COVID-19 patients. When the second major wave of coronavirus patients appeared in fall, staff had to build a second COVID-19 unit quickly, which meant moving patients and realigning staff.

Nurses from different units must be ready to change responsibilities quickly. For example, a surgical nurse accustomed to caring for patients who have had hip or knee replacements might have to pivot to care for sick people.

That does not mean those nurses are doing work they are unqualified for; it might just be a bit out of their comfort zone, Sankey said.

Sankey, meanwhile, oversees it all. 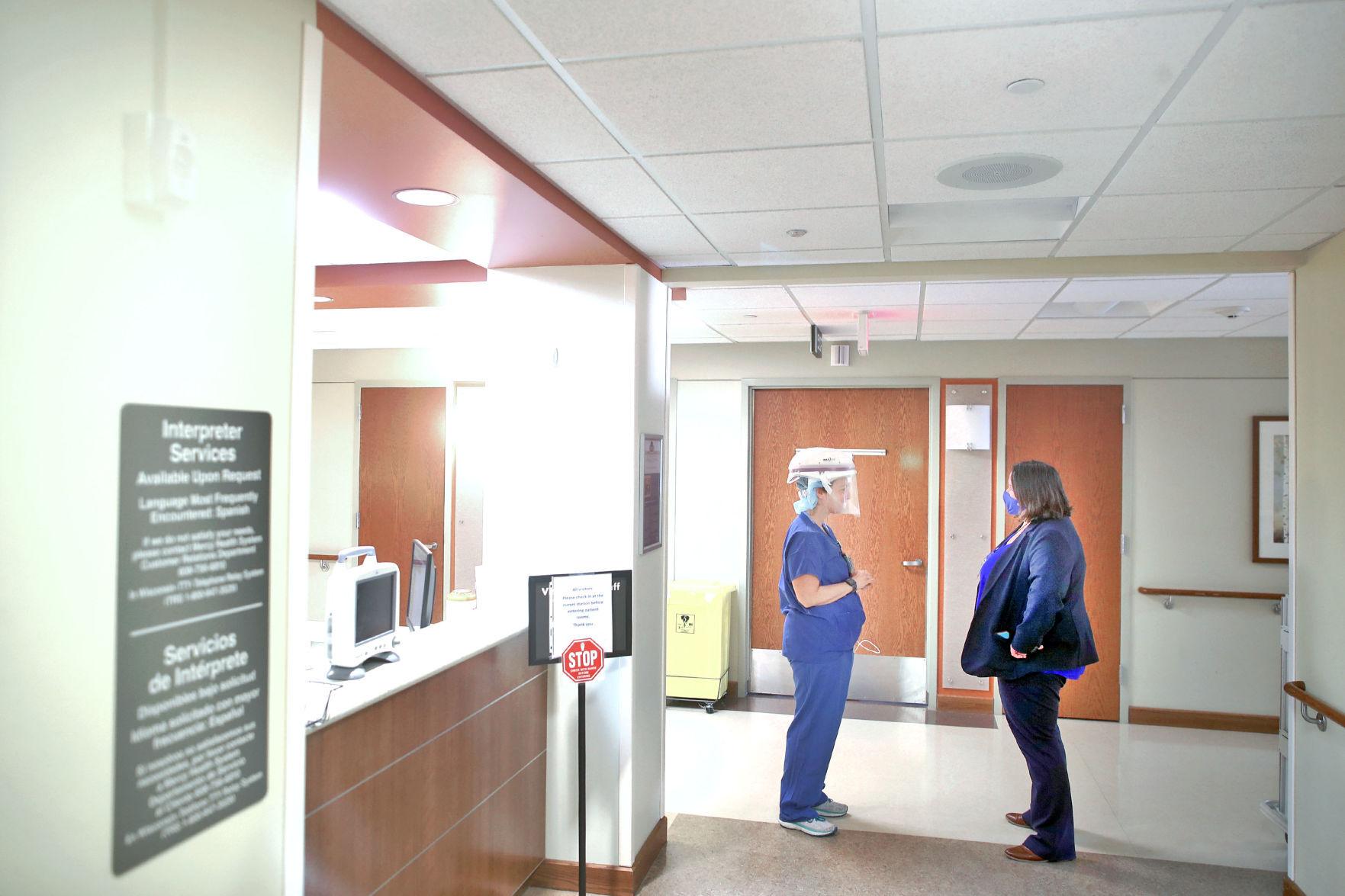 Kara Sankey, chief nursing officer at Mercyhealth Hospital and Trauma Center, Janesville, speaks with a nurse near the entrance of the COVID-19 unit.

And each change has an effect in nearly every other area of the hospital, Sankey said.

Turning one area into a COVID-19 unit means the pharmacy has to change its methods for delivering medicine, and food service has to determine how to deliver food.

Safety protocols themselves present rippling challenges throughout the hospital, Sankey said. Extra cleaning requirements can mean delays in getting patients into beds. People waiting in the emergency room might have to wait a bit longer for bed space, especially if the hospital census is high and staff are strained.

Not every day is horrible, Sankey said, but there are a lot of really terrible days.

People don’t realize that numbers don’t always paint the full picture, she said. The hospital might have fewer patients on a given day, but that doesn’t necessarily mean the pandemic is under control or is no big deal.

It takes only one or two horrible situations to weigh on hospital staff or cause stress in a unit, Sankey said.

Trish Reed, a Mercyhealth spokeswoman, said Sankey downplays the amount of work she has done to help others and the community.

“Kara is basically a superstar. She is freaking fantastic; she is humble,” Reed said. “... From an outside perspective, she is a rock star, and her team loves her.” 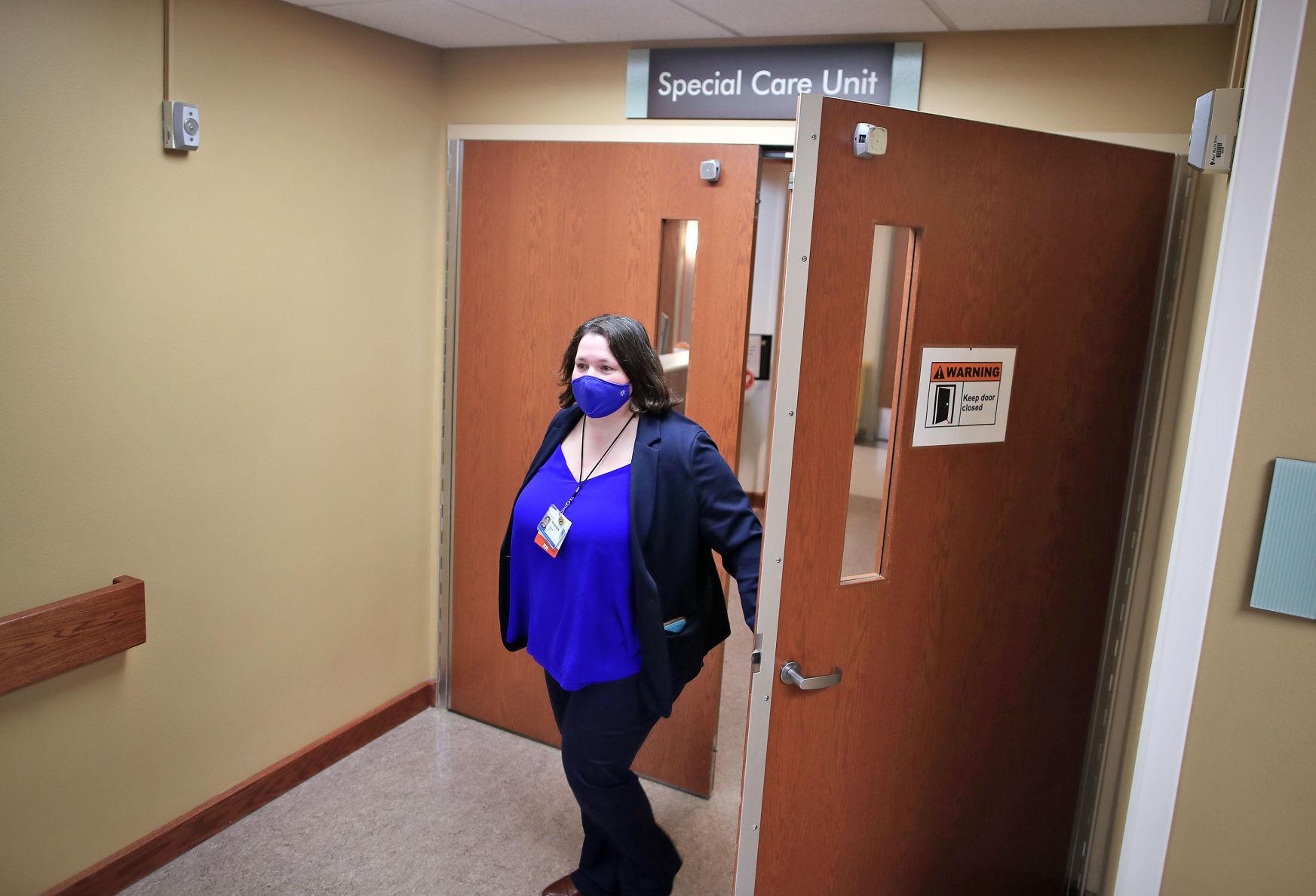 Earlier this year, he searched old newspapers online for historical information about the sheriff’s office.

In the process, he discovered a woman way ahead of her time.

Among them was Mary Whelan of Beloit, who “has the distinction of being the only woman deputy sheriff ever appointed from this office and probably the only one in the entire state,” the article said.

Whelan was named a deputy for the municipal court in Beloit.

“It’s pretty astounding that Miss Mary Whelan would have been involved in this line of work back in 1917,” Knudson said.

The article does not make clear if Whelan performed the same job duties as male deputies in 1917.

Until Knudson’s discovery, the first female deputy was considered to be Karen Thom, who was hired in 1977. She performed the same job duties as male deputies, including working on patrol.

Before being hired as a Rock County deputy, Thom made history at the Wisconsin State Patrol as one of the first women to wear a badge and a uniform.

Knudson did not find another Gazette article about Whelan until Nov. 8, 1933.

The story showed how far she had come.

Whelan held two federal positions as the “only woman advisor to the federal narcotics bureau” and was a special assistant to the U.S. attorney general, the article said.

When she resigned the posts, Whelan returned to Beloit to practice law.

A search by the Beloit Historical Society did not turn up a photo of Whelan or any other information about her life.

Without any more information about Whelan’s life, we can only imagine what motivated her to step into a man’s occupation at the time or how she was received.

Decades later, other women brought their unique gifts and abilities to the profession of law enforcement. Among the earliest were Sue Wisch, Virginia McCaul and Hollis Petersen, in addition to Thom, who served as Rock County deputies in the 1970s and 1980s.

In August 1982, a 24-year-old Barb Barrington-Tillman broke gender barriers again when the Rock County Sheriff’s Office hired her as a deputy.

Two other female deputies worked at the sheriff’s office at the time, and another was hired 10 days after Barrington-Tillman.

Her interest in law enforcement began when she was hired to type reports at the Beloit Police Department in 1978.

“I got bit by the bug,” Barrington-Tillman said, “when I learned about how law enforcement helps people and the impact it has on their lives.”

She began as a police aide, then sought a law enforcement position and applied at the Rock County Sheriff’s Office.

For training, she attended the Police Academy at Northeast Wisconsin Technical College in Green Bay and was the only woman in a class of 23 men.

Barrington-Tillman began her job working at the jail, like all new deputies at the time. Later, she was assigned to patrol.

In 1987, she became an acting sergeant before being promoted to sergeant in November and was the first female supervisor at the sheriff’s office.

“The way I was received as a female supervisor was very positive,” she recalled. “I didn’t come in with the mindset that I couldn’t or shouldn’t be doing this. I had the mindset that I am going to do the best I can to make things better.”

Barrington-Tillman believed it was important to be a mentor to other women and was a founding member of the Wisconsin Association of Women Police. She also served on the board of directors as vice president.

During her 37 years with the sheriff’s office, she saw big changes in the corrections system.

“We were shifting to more programming and opportunities for inmates,” Barrington-Tillman said. “More than anything, I think I was part of being an educator at the sheriff’s office, when the mindset of law enforcement shifted from all enforcement and just incarceration to programming and building bridges in the community.”

Barrington-Tillman advanced up the chain of command.

“I was not fearful,” she said. “I knew that I was given an opportunity, and I should definitely make the best of the opportunity. I really didn’t think about being a female.”

“This county has done very well with bringing in female officers,” she said. “We’ve had a lot of success in embracing women in emergency services, not just in law enforcement.”

“Women are represented in every category, which is different than when Chief Deputy Tillman started—and certainly different from 1917,” Knudson said.

Nationally, women account for only 13% of police officers across the country, according to the National Center for Women and Policing. Even fewer are in supervisory roles.

“Diversity is our strength,” he said. “As we attempt to resolve issues in our community, it is good to get a wide perspective on how those problems are best addressed.”

In some cases, victims are more comfortable talking to women, Knudson said.

He is proud that the sheriff’s office hires capable women, including Mary Whelan more than a century ago.

“I have a great deal of respect for those who went before us and try to learn from them what I can,” he said.

He added that many questions remain about who Mary Whelan was.

“I would be thrilled,” Knudson said, “if there is a grandchild or someone out there who can fill in some of the blanks.” 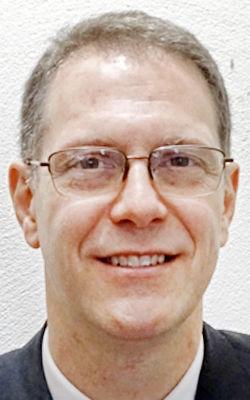