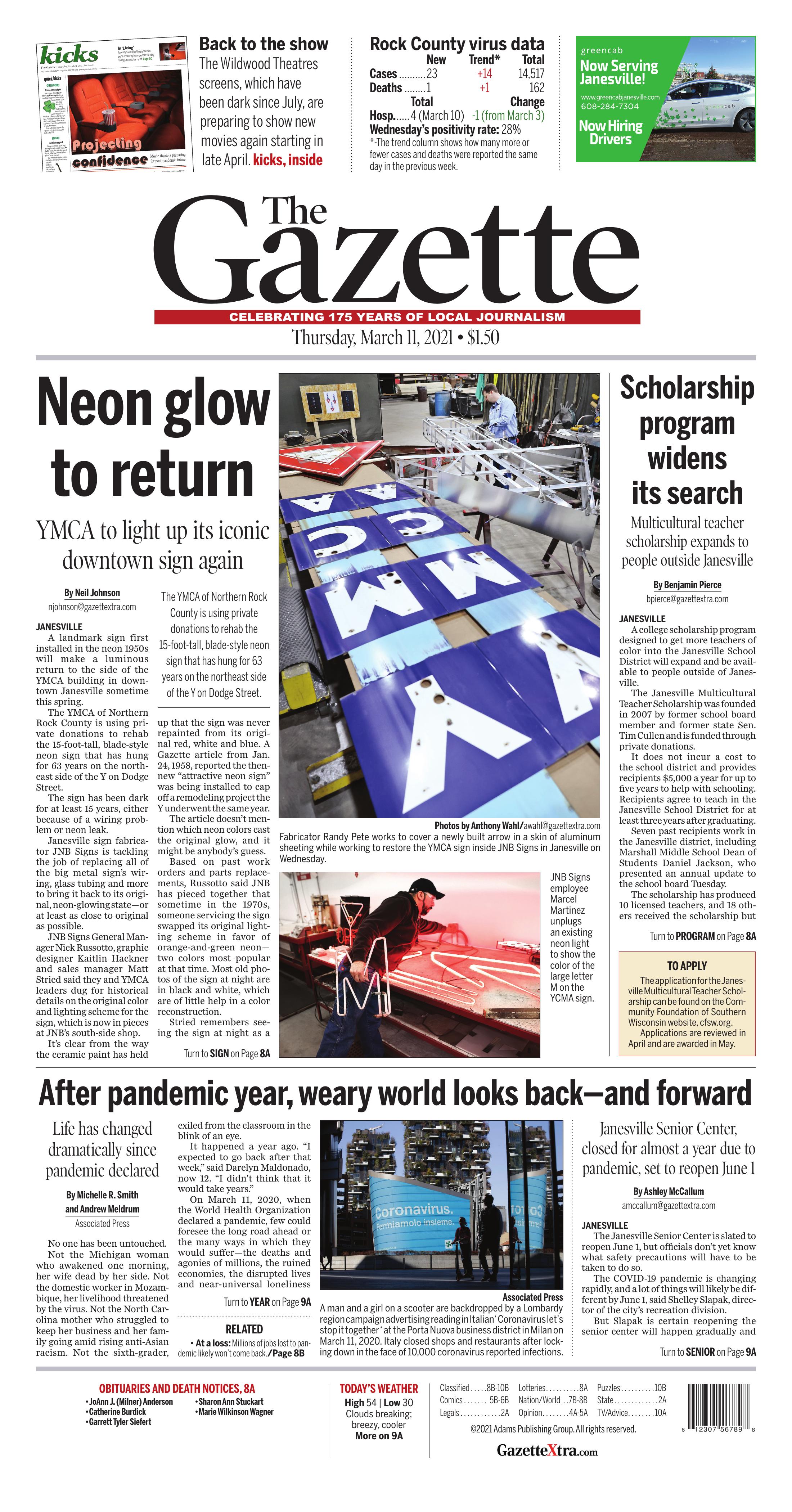 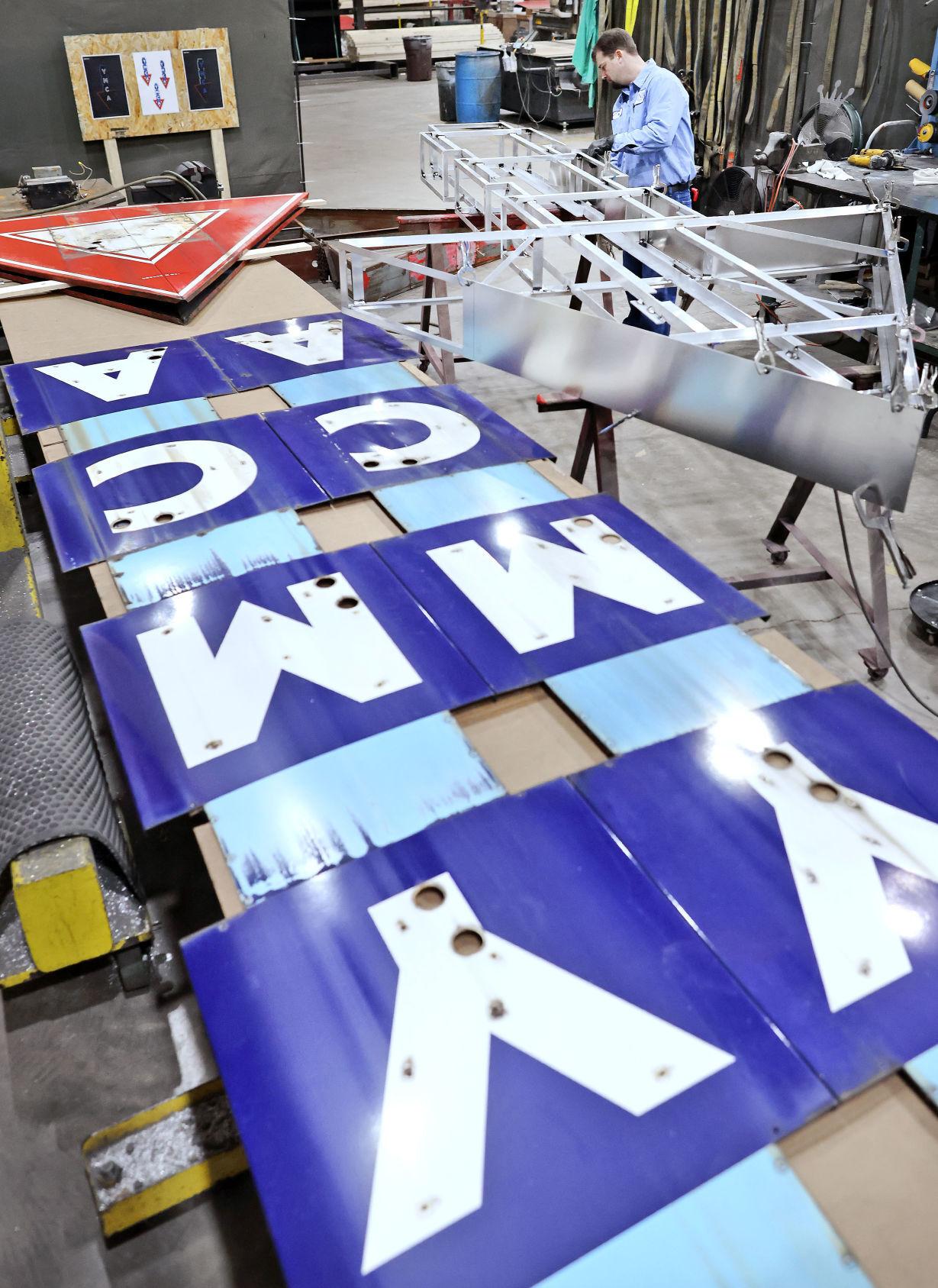 Fabricator Randy Pete works to cover a newly built arrow in a skin of aluminum sheeting while working to restore the YMCA sign inside JNB Signs in Janesville on Wednesday.

A landmark sign first installed in the neon 1950s will make a luminous return to the side of the YMCA building in downtown Janesville sometime this spring.

The YMCA of Northern Rock County is using private donations to rehab the 15-foot-tall, blade-style neon sign that has hung for 63 years on the northeast side of the Y on Dodge Street.

The sign has been dark for at least 15 years, either because of a wiring problem or neon leak.

Janesville sign fabricator JNB Signs is tackling the job of replacing all of the big metal sign’s wiring, glass tubing and more to bring it back to its original, neon-glowing state—or at least as close to original as possible.

JNB Signs General Manager Nick Russotto, graphic designer Kaitlin Hackner and sales manager Matt Stried said they and YMCA leaders dug for historical details on the original color and lighting scheme for the sign, which is now in pieces at JNB’s south-side shop.

It’s clear from the way the ceramic paint has held up that the sign was never repainted from its original red, white and blue. A Gazette article from Jan. 24, 1958, reported the then-new “attractive neon sign” was being installed to cap off a remodeling project the Y underwent the same year.

The article doesn’t mention which neon colors cast the original glow, and it might be anybody’s guess.

Based on past work orders and parts replacements, Russotto said JNB has pieced together that sometime in the 1970s, someone servicing the sign swapped its original lighting scheme in favor of orange-and-green neon—two colors most popular at that time. Most old photos of the sign at night are in black and white, which are of little help in a color reconstruction.

Stried remembers seeing the sign at night as a kid in the 1970s. At that time, the Y’s sign—a landmark for car cruisers—glowed orange and green.

When Stried saw the tubes lit up for testing at JNB’s neon lighting workshop, they stirred a sense of nostalgia within him. He thinks it’s more likely that, originally, the sign lit up in blue and white neon when it was first hung in 1958.

JNB this week gave the Y a pair of 3D renderings that reinterpret how the first sign might have looked at night.

One rendering shows the vertical YMCA letters lit in bright blue neon. In another scheme, which Russotto and Hackner think is more likely to have been original, the letters are bright white against a blue neon background.

If not for a private donation to help make the case for a revamp, the sign’s days might have been numbered. Stried said Y leaders had contemplated removing the sign as they work to bring marketing in line with the national organization’s branding strategy.

In an announcement about the sign rehab, CEO Angie Bolson said the Y wants to give longtime members a sense of “nostalgia” while trying to draw in potential new members. The Y views the project as a small piece of the city’s downtown revitalization.

The sign could be reinstalled and in working order again by mid-April, officials said.

When JNB removed the sign earlier this month, the unbolting and unchaining of metal framework revealed two startling things.

However, they also discovered that the metal frame holding the sign was badly rusted and had been weakened by several modifications to the lighting and wiring.

JNB has begun fabricating a new aluminum frame for the original colored panels. Russotto said the company plans to clean and polish the ceramic color coating on the panels to bring back as much of the original luster as possible.

The company also will hand-shape new neon tubes for the sign and replace all the lighting transformers, some of which are from the late 1960s.

When finished, the YMCA sign will be one of few large neon signs that remain in working order downtown. Another is the large red Ace Hardware sign on the roof of the Ace store on South River Street.

“It’s kind of a dying art, neon. But when you compare how it looks to newer lights that use LED to replicate neon, the LEDs look good. But they’re no comparison to true neon,” Russotto said.

He and Stried said their company works on new neon signs all over the country. It’s a rare opportunity to preserve a local sign that’s considered iconic and bring it back to its original state.

Russotto pointed out that the screws used to assemble the sign are backed with their original square nuts. In 1958, someone would have hand-tightened all those screws.

“For the person who originally put this sign together, it would have taken them days to put in all those screws,” he said. “Whoever did that work, they’re probably deceased by now.

“That’s what you’re thinking about when you get some of these old signs in. It’s not just business. There’s more responsibility and history tied to it. So it’s beyond being just another job.”

Obituaries and death notices for March 11, 2021

A college scholarship program designed to get more teachers of color into the Janesville School District will expand and be available to people outside of Janesville.

The Janesville Multicultural Teacher Scholarship was founded in 2007 by former school board member and former state Sen. Tim Cullen and is funded through private donations.

It does not incur a cost to the school district and provides recipients $5,000 a year for up to five years to help with schooling. Recipients agree to teach in the Janesville School District for at least three years after graduating.

The application for the Janesville Multicultural Teacher Scholarship can be found on the Community Foundation of Southern Wisconsin website, cfsw.org.

Applications are reviewed in April and are awarded in May.

Seven past recipients work in the Janesville district, including Marshall Middle School Dean of Students Daniel Jackson, who presented an annual update to the school board Tuesday.

Four past students are working toward their degrees with the help of the scholarship.

The scholarship was available only to students in the Janesville School District at its inception. It eventually was widened to allow Janesville residents looking for a career change to apply and will now be available to high schoolers and residents outside the city.

School board member Greg Ardrey has been on the scholarship committee since it began prior to his time on the board. He said expanding the scholarship is an important step.

“If there are students of color in other nearby districts who want to be teaching and want to continue to live in the area, they should have a realistic opportunity. We could help them and they could help us by being a teacher of color in the district, assuming they do all they need to do school-wise,” Ardrey said.

The district has not begun conversations with other area districts on the expansion. The Beloit School District runs a similar program. Ardrey said Janesville doesn’t want to poach students from that program but said the program could help students of color in other districts.

“If there are other students of color that want to be teachers, if they’re willing to commit back to Janesville, we want to get them,” he said.

The widening gap had a lot to do with deciding to expand the program, Ardrey said. Part of this issue relates to Act 10, which reduced the number of teachers overall, and especially those of color, across the state, Ardrey said.

“There are just less teacher applicants period, so then there’s far less students of color really seeking to be teachers. We need applicants,” he said.

Teachers of color had risen close to 3% in 2014-15, but some of those teachers left the district to pursue other opportunities. Ardrey said raising the number should be a focus.

“Seeing teachers who look like you is key because, No. 1, the students see it as a possibility for them,” Ardrey said. “Teachers are encouraging anyway, but sometimes the shared life experiences just being a similar person of color … a teacher may be able to speak the language of the student a little bit better and ultimately connect with them on a level that others just may not be able to.”

The Janesville Senior Center is slated to reopen June 1, but officials don’t yet know what safety precautions will have to be taken to do so.

The COVID-19 pandemic is changing rapidly, and a lot of things will likely be different by June 1, said Shelley Slapak, director of the city’s recreation division.

But Slapak is certain reopening the senior center will happen gradually and with precautions such as social distancing and surface sanitizing.

“We know seniors are very excited to get back in the building,” Slapak said. “We are, too, but we need a soft reopening because we don’t want 100 people walking in the door at the same time.”

The senior center has been closed since March 15, 2020, which was about the same time a flurry of cancellations and closings began because of the coronavirus pandemic.

Seniors are especially vulnerable to the disease. In Rock County, 85% of the county’s 162 deaths caused by COVID-19 were people older than 60, according to county data.

As of Wednesday, about 64% of Rock County seniors ages 65 and older have been vaccinated for COVID-19 and the age group continues to be county vaccinators’ top priority.

The senior center offers membership to people ages 50 and older. It is unclear yet when people younger than 65 in Wisconsin will be able to get vaccinated if they do not fall in already identified eligibility groups.

The Rock County Public Health Department on March 2 changed its countywide reopening recommendations to Phase 2, which allows for senior centers to reopen.

Slapak said city officials were pleasantly surprised to hear the announcement but will delay opening until June 1 for two reasons: to give seniors more time to get vaccinated and to allow for completion of the senior center HVAC system replacement.

The facility closure has allowed senior center staff to do some maintenance and upkeep, including replacement of the HVAC system, which is expected to be completed in late May.

Rooms have been painted and organized—tasks that are difficult to accomplish when hundreds of people are coming and going each day, Slapak said.

The city will continue offering off-site programming as it has since the center closed a year a ago, Slapak said.

Spring will allow for the return of popular outdoor activities such as line dancing and clogging, Slapak said.