This aerial photo shows the village of Darien in 2018.

In the Walworth County village of Darien, where as of mid-July a single home building permit had been taken out this year, and the total tax rate has been among the area’s highest for nearly 15 years, officials see new development as the key to reducing the tax burden on residents.

The tiny village, which stretches over just 1.29 square miles and had a population of 1,471 in 2020, was Walworth County’s most expensive municipality to pay property taxes in last year, analysis by The Gazette shows.

Some other municipalities come close with their total tax rates—for example, village of Sharon property owners who are within the J11 school district boundaries paid $22.76 per $1,000 in 2021.

But in places like Fontana, Lake Geneva and parts of Bloomfield, the total tax rate—including the school, municipal, county and technical college portions—is less than Darien’s village portion alone.

Part of the solution, village of Darien officials suggest, is spreading out the burden among a larger pool of taxpayers, by bringing in more business and residential development.

That has been tried, with mixed success. One such development, NewCold frozen food storage planned at the intersections of Countys C and X, has brought heavy opposition from neighbors. Those opposed have argued that a 131-foot tall facility, operating 24 hours a day, 7 days a week, will lead to deteriorated roads from increased semi traffic and disrupt life for the surrounding neighbors.

“We are, by and large, a very slow growth community,” Village Administrator Lindsey Peterson said. “Obviously, having the highest tax rate in Walworth County is not very attractive to new development.”

And “we haven’t had much ability to grow our tax base, which obviously puts a bigger burden on the smaller tax base that we have,” Peterson added.

Peterson said it’s remained high due to many factors, including village debt and the condition of homes in the village.

Current village board member Greg Epping, also a past member of the plan commission and a now-retired village public works employee, said when he and his wife moved to Darien in the early 1990s, the population tended to be lower-income and some homeowners had received grants to fix up their homes.

“You try not to be too negative … the village, my feeling was, was probably a little on the poorer side,” Epping recalled of the village in those days. “Not as well kept as it is today, in my opinion.”

And in the early 2000s, efforts to broaden the tax base didn’t always come to fruition. In 2007, three different subdivisions were on the verge of coming to Darien, but all three plans fell apart in the recession that began in 2008, Epping said. Since then, the village’s growth has been slow, with industrial growth faster than residential, Epping said.

The village’s current debt load includes nearly $6.5 million from infrastructure projects such as sewer and street improvement projects, as well as the construction of the village hall. Some of that debt has already been refinanced, Peterson said, in one instance saving the village approximately $250,000 in interest.

Highest tax rate in the county

Of the 13 other cities and villages located in Walworth County, nine have municipal tax rates that were half, or less than half, of Darien’s in 2021. William’s Bay came in at the lowest last year, at $3.60 per $1,000 of assessed value.

The city of Delavan and the village of Sharon municipal portions of the tax rate are most closely aligned with Darien’s, at $10.10 and $11.50, respectively.

The steepest contrast is between the village of Darien and its closest neighboring township, the town of Darien. In part because it receives subsidies from the Green For Life Mallard Ridge Landfill on Hwy. 11, the town of Darien has the lowest municipal portion of the tax rate among Walworth County townships, just 22 cents per $1,000 in 2021.

The village’s high tax rate and how it compares to neighboring towns and villages is something Peterson says she tries to be upfront about as staff work to lure new development.

“Obviously we want to do everything we can to encourage them to come here, but I also want them to understand upfront that (our tax rate) has

Village officials say convincing businesses and developers to choose Darien, regardless of its high taxes, is their main challenge.

The village’s small staff doesn’t have the bandwidth that some other area municipal staff have to pursue new development projects, Epping said. And so, the village has been working with the Walworth County Economic Development Alliance for the past five years to put its name in front of prospective businesses.

“For communities our size, it’s a struggle to compete with larger communities that have staff to recruit, or can use more of the tools and be effective in drawing businesses,” Epping said. “The Economic Development Group in Walworth County helps a bunch here. For us, it’s our only way to compete, to get some of that growth.”

In the meantime, Peterson said village staff are hoping the NewCold development, along with other project such as a Kwik Trip that opened earlier this month, will help bring in other development, broaden the tax base and change the perception that the village isn’t open to growth.

“I went to school at Delavan-Darien school district, and I just remember the village of Darien having not the best reputation as far as approving new developments,” she said. “(Village board members) hope to change that, they hope to change the reputation that the village had … they see this as an opportunity to fix the direction.”

*Per 1,000 of assessed property value, including all portions of the annual tax bill (school district, municipality, county and technical college) 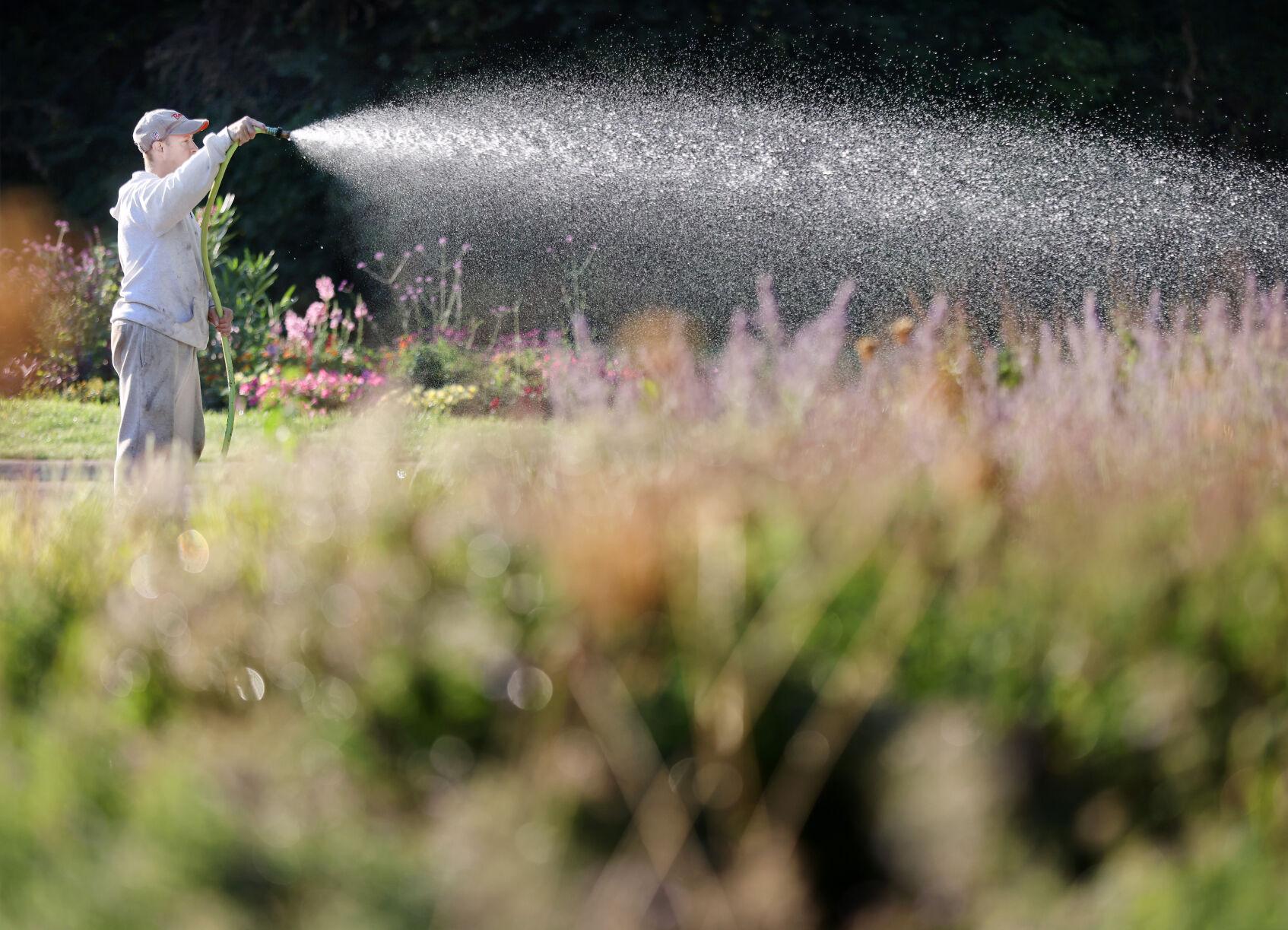 Brian Walter gives the flower beds in front of the Rotary Botanical Gardens a good soak while working early Wednesday morning in Janesville.

Voters in the Parkview School District will see two referendum questions on the Nov. 8 ballot.

Parkview’s Board of Education voted this week to move forward with the plan to seek $15.4 million for capital/facilities improvements and $2 million per year for three years for operations.

The approved referendum language says the additional funds are needed to attract and retain high-quality staff; maintain small class sizes; offer advanced placement and elective courses; and address operational needs, educational upgrades, and deferred maintenance across the district. If the referendum is approved, the district would move ahead with remodeling and adding onto both its elementary school and junior/senior high school.

In 2020, Parkview School District voters approved an operational referendum, that sunsets in 2023. And over the past two years, state aid has not kept up with rising costs, according to a release from the district.

In 2014, voters approved a capital referendum for facility improvements. Now, the district would like to build upon what was started, the release said.

Approval of the operational referendum question would result in an estimated tax increase of $64 for the owner of a $100,000 home, for three years.

Approval of the capital referendum question would result in an estimated tax increase of $3 for a $100,000 home.

In the past year, the district has completed a facilities study, met with, and surveyed staff on facilities inadequacies, and sought feedback via a community-wide survey.

The district worked “to create a plan that would address prioritized needs and also extend the life of our buildings—an investment in Parkview for today and the future” Superintendent Steve Lutzke said in the release.

Some components of the plan include: