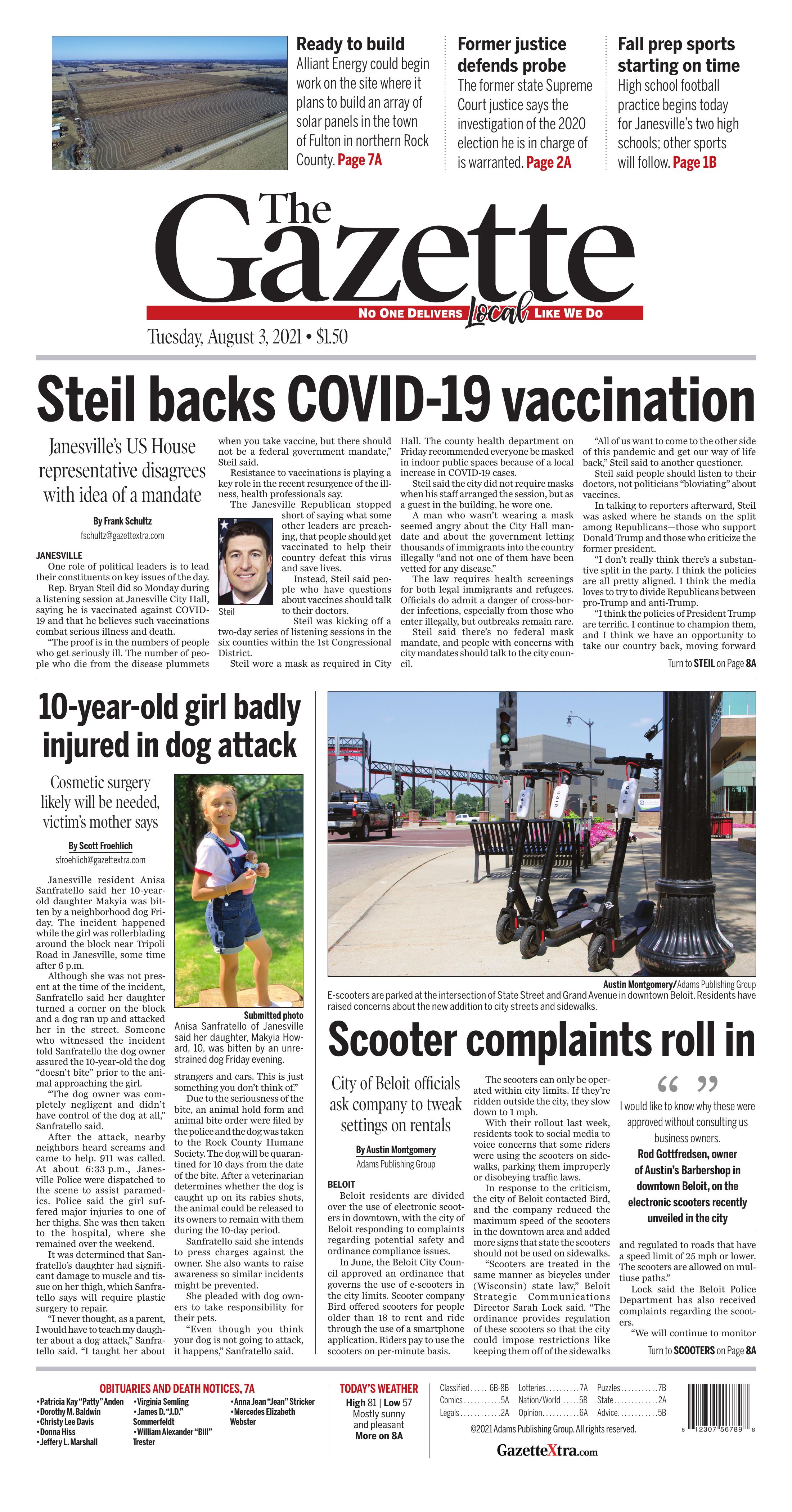 One role of political leaders is to lead their constituents on key issues of the day.

Rep. Bryan Steil did so Monday during a listening session at Janesville City Hall, saying he is vaccinated against COVID-19 and that he believes such vaccinations combat serious illness and death.

“The proof is in the numbers of people who get seriously ill. The number of people who die from the disease plummets when you take vaccine, but there should not be a federal government mandate,” Steil said.

Resistance to vaccinations is playing a key role in the recent resurgence of the illness, health professionals say.

The Janesville Republican stopped short of saying what some other leaders are preaching, that people should get vaccinated to help their country defeat this virus and save lives.

Instead, Steil said people who have questions about vaccines should talk to their doctors.

Steil was kicking off a two-day series of listening sessions in the six counties within the 1st Congressional District.

Steil wore a mask as required in City Hall. The county health department on Friday recommended everyone be masked in indoor public spaces because of a local increase in COVID-19 cases.

Steil said the city did not require masks when his staff arranged the session, but as a guest in the building, he wore one.

Steil said the next stop in his listening tour was in East Troy, where masks are not required.

A man who wasn’t wearing a mask seemed angry about the City Hall mandate and about the government letting thousands of immigrants into the country illegally “and not one of them have been vetted for any disease.”

The law requires health screenings for both legal immigrants and refugees. Officials do admit a danger of cross-border infections, especially from those who enter illegally, but outbreaks remain rare.

Steil said there’s no federal mask mandate, and people with concerns with city mandates should talk to the city council.

“All of us want to come to the other side of this pandemic and get our way of life back,” Steil said to another questioner.

Steil got another question from a woman who said her daughter is in Japan with the Army, and she is concerned that the military is moving towards mandating the COVID-19 vaccine. She said he heard the vaccine could affect fertility, and “I want grandchildren.”

COVID-19 can affect male fertility, according to health experts, but the vaccine does not affect female fertility.

Steil said people should listen to their doctors, not politicians “bloviating” about vaccines. He said he would look into the question about the military enforcing a vaccine mandate.

In talking to reporters afterward, Steil was asked where he stands on the split among Republicans—those who support Donald Trump and those who criticize the former president.

“I don’t really think there’s a substantive split in the party. I think the policies are all pretty aligned. I think the media loves to try to divide Republicans between pro-Trump and anti-Trump.

“I think the policies of President Trump are terrific. I continue to champion them, and I think we have an opportunity to take our country back, moving forward in 2022, particularly by removing Speaker (Nancy) Pelosi from being speaker of the House of Representatives,” Steil said.

Asked what he means by taking the country back, Steil said: “I think you look at the broad spending we’re seeing in Washington. I think that puts our country in real, serious jeopardy. … I think we continue to see proposed mandates coming out of Washington. Look at the mask mandate in the U.S. House of Representatives as an example where some in Washington, D.C., want to take our country.”

In responses to other questions Steil said he:

In a recent tweet, Steil said he also is concerned that the spending would lead to inflation, raising consumer prices.“The rate of spending that is going on in Washington is dangerous to the whole structure of your federal government,” he said.

Steil said he supports fixing a broken system of legal immigration, a position that his predecessor, Paul Ryan, and many Democrats have held for years, although Congress has not taken any action.

Steil said restaurants and bars have been hit hard, and he is paying close attention to a bill that would allow the fund shift.

The questioner asked Steil to take a stand against this behavior.

Steil said he shares those concerns and recommends people seek a variety of news sources, and he said they should be aware that outlets such as CNN, Fox News and MSNBC have their particular perspectives. Steil also recommended constituents follow his office’s pronouncements.

E-scooters are parked at the intersection of State Street and Grand Avenue in downtown Beloit. Residents have raised concerns about the new addition to city streets and sidewalks.

Beloit residents are divided over the use of electronic scooters in downtown, with the city of Beloit responding to complaints regarding potential safety and ordinance compliance issues.

In June, the Beloit City Council approved an ordinance that governs the use of e-scooters in the city limits. Scooter company Bird offered scooters for people older than 18 to rent and ride through the use of a smartphone application. Riders pay to use the scooters on per-minute basis.

The scooters can only be operated within city limits. If they’re ridden outside the city, they slow down to 1 mph.

With their rollout last week, residents took to social media to voice concerns that some riders were using the scooters on sidewalks, parking them improperly or disobeying traffic laws.

In response to the criticism, the city of Beloit contacted Bird, and the company reduced the maximum speed of the scooters in the downtown area and added more signs that state the scooters should not be used on sidewalks.

“Scooters are treated in the same manner as bicycles under (Wisconsin) state law,” Beloit Strategic Communications Director Sarah Lock said. “The ordinance provides regulation of these scooters so that the city could impose restrictions like keeping them off of the sidewalks and regulated to roads that have a speed limit of 25 mph or lower. The scooters are allowed on multiuse paths.”

Lock said the Beloit Police Department has also received complaints regarding the scooters.

“We will continue to monitor the program and determine if there will need to be changes in the future,” Lock said.

Rod Gottfredsen, owner of Austin’s Barbershop, 316 State St., said he was concerned after seeing riders he believed to be under 18 using scooters and leaving tire skid marks on sidewalks around downtown.

“I would like to know why these were approved without consulting us business owners,” Gottfredsen said.

Representatives for Visit Beloit and the Downtown Beloit Association could not be reached for comment as of press time Monday.

Linda Appleby said she “nearly hit” three scooter riders while driving Saturday who she said were riding “up the center of the road on the hill on Bushnell from Pleasant Street.”

“My pedestrian detection buzzed loudly, and my car auto braked hard and (they) laughed. It was that close,” she added.

Residents from other cities have also weighed in on scooter rollouts, with Racine resident Kay Shalbrack saying, “ People that ride them dodge in and out of traffic, and when not in use, leave them everywhere. Bad idea.”

Texas resident Matt Turner said, “These things hit Austin probably a decade ago and they’re terrible. They end up everywhere and most people don’t leave them nicely so they are tripping hazards.”

Some out-of-town commenters said the scooters were a benefit to downtown areas everywhere.

“I know people who use them to commute when the weather’s decent,” Pann said.

And some local residents are supporting the effort.

Jim Maloney added, “Strategically placed by municipal lots downtown for your use to get to ABC Supply Stadium, someone saw the need and provided the tool.”

If a resident has questions or concerns about the e-scooters, the company can be reached directly at 1-866-205-2442 or hello@bird.co. 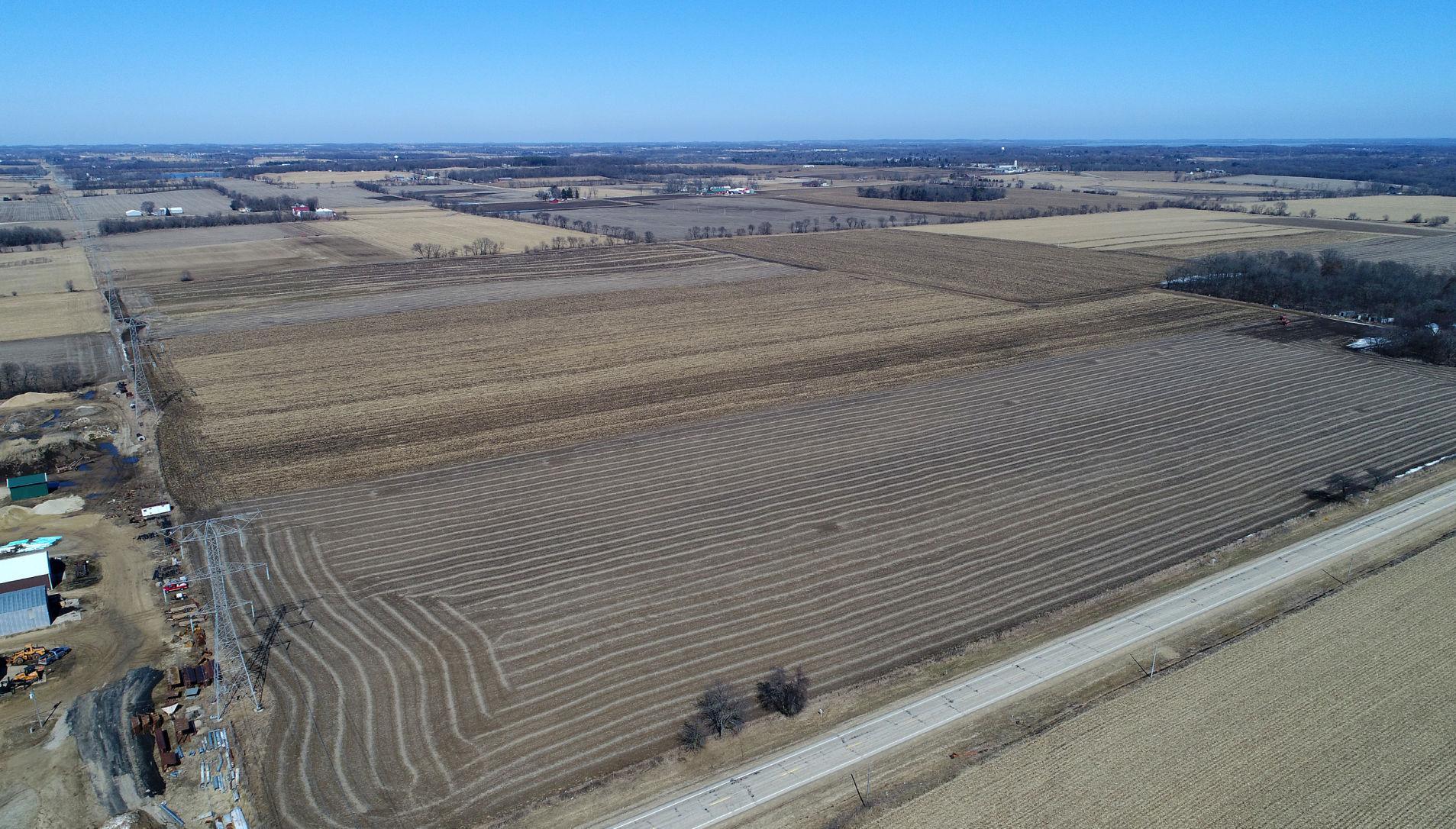 a 2020 file photo of a 440-acre swath of farmland off County M and West Pomeroy Road in the town of Fulton that Alliant Energy has bought and plans to develop as a 50-megawatt solar farm.

Janesville resident Anisa Sanfratello said her 10-year-old daughter Makyia was bitten by a neighborhood dog Friday. The incident happened while the girl was rollerblading around the block near Tripoli Road in Janesville, some time after 6 p.m.

Although she was not present at the time of the incident, Sanfratello said her daughter turned a corner on the block and a dog ran up and attacked her in the street. Someone who witnessed the incident told Sanfratello the dog owner assured the 10-year-old the dog “doesn’t bite” prior to the animal approaching the girl.

“The dog owner was completely negligent and didn’t have control of the dog at all,” Sanfratello said.

After the attack, nearby neighbors heard screams and came to help. 911 was called. At about 6:33 p.m., Janesville Police were dispatched to the scene to assist paramedics. Police said the girl suffered major injuries to one of her thighs. She was then taken to the hospital, where she remained over the weekend.

It was determined that Sanfratello’s daughter had significant damage to muscle and tissue on her thigh, which Sanfratello says will require plastic surgery to repair.

“I never thought, as a parent, I would have to teach my daughter about a dog attack,” Sanfratello said. “I taught her about strangers and cars. This is just something you don’t think of.”

Due to the seriousness of the bite, an animal hold form and animal bite order were filed by the police and the dog was taken to the Rock County Humane Society. The dog will be quarantined for 10 days from the date of the bite. After a veterinarian determines whether the dog is caught up on its rabies shots, the animal could be released to its owners to remain with them during the 10-day period.

Sanfratello said she intends to press charges against the owner. She also wants to raise awareness so similar incidents might be prevented.

She pleaded with dog owners to take responsibility for their pets.

“Even though you think your dog is not going to attack, it happens,” Sanfratello said.