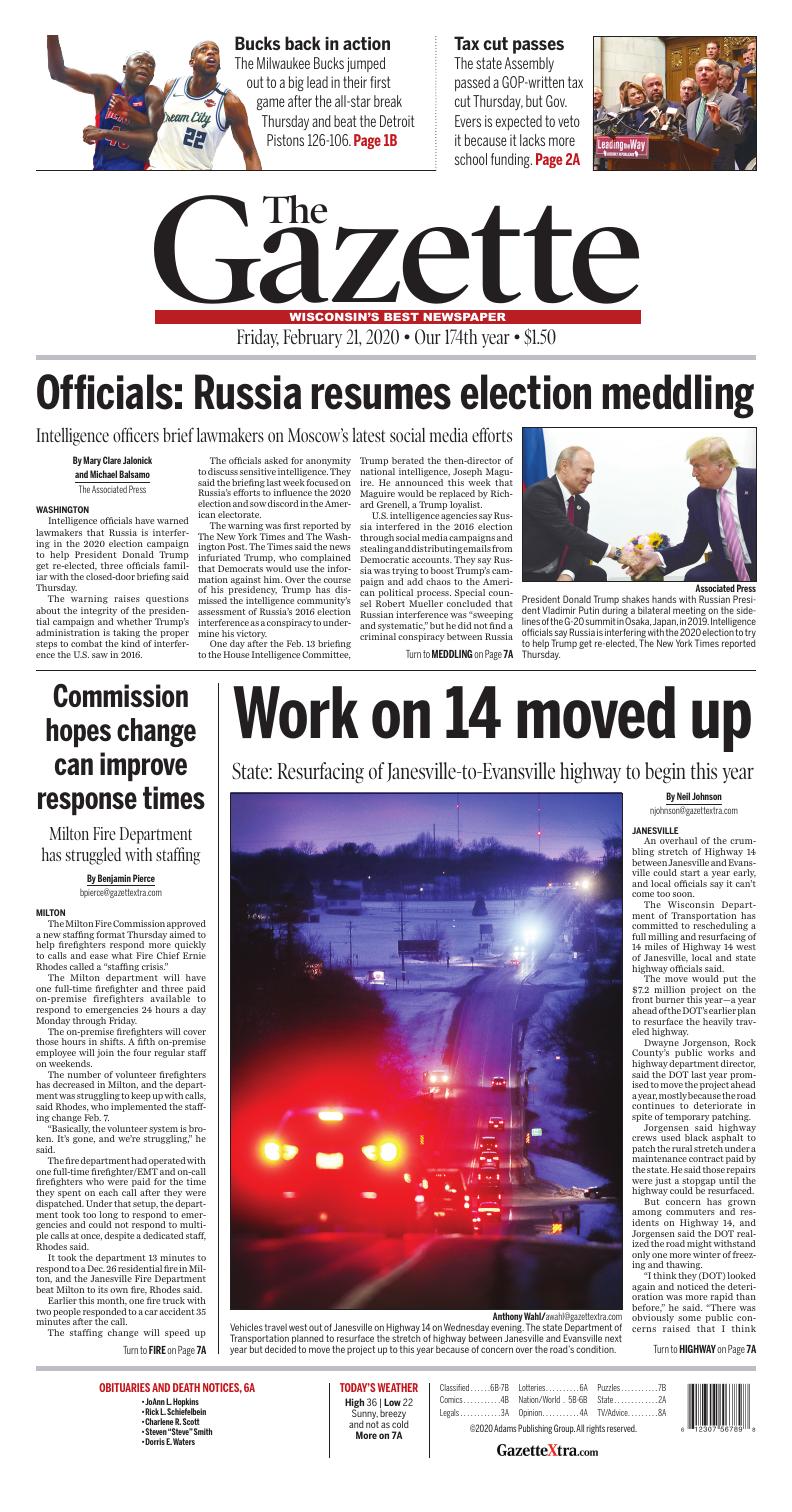 Vehicles travel west on Highway 14 outside of Janesville on Wednesday evening. Highway 14 is due for a makeover between Evansville and Janesville.

Vehicles travel west out of Janesville on Highway 14 on Wednesday evening. The state Department of Transportation planned to resurface the stretch of highway between Janesville and Evansville next year but decided to move the project up to this year because of concern over the road’s condition.

An overhaul of the crumbling stretch of Highway 14 between Janesville and Evansville could start a year early, and local officials say it can’t come too soon.

The Wisconsin Department of Transportation has committed to rescheduling a full milling and resurfacing of 14 miles of Highway 14 west of Janesville, local and state highway officials said.

The move would put the $7.2 million project on the front burner this year—a year ahead of the DOT’s earlier plan to resurface the heavily traveled highway.

Dwayne Jorgenson, Rock County’s public works and highway department director, said the DOT last year promised to move the project ahead a year, mostly because the road continues to deteriorate in spite of temporary patching.

Jorgensen said highway crews used black asphalt to patch the rural stretch under a maintenance contract paid by the state. He said those repairs were just a stopgap until the highway could be resurfaced.

But concern has grown among commuters and residents on Highway 14, and Jorgensen said the DOT realized the road might withstand only one more winter of freezing and thawing.

“I think they (DOT) looked again and noticed the deterioration was more rapid than before,” he said. “There was obviously some public concerns raised that I think generated some extra attention to it all.” 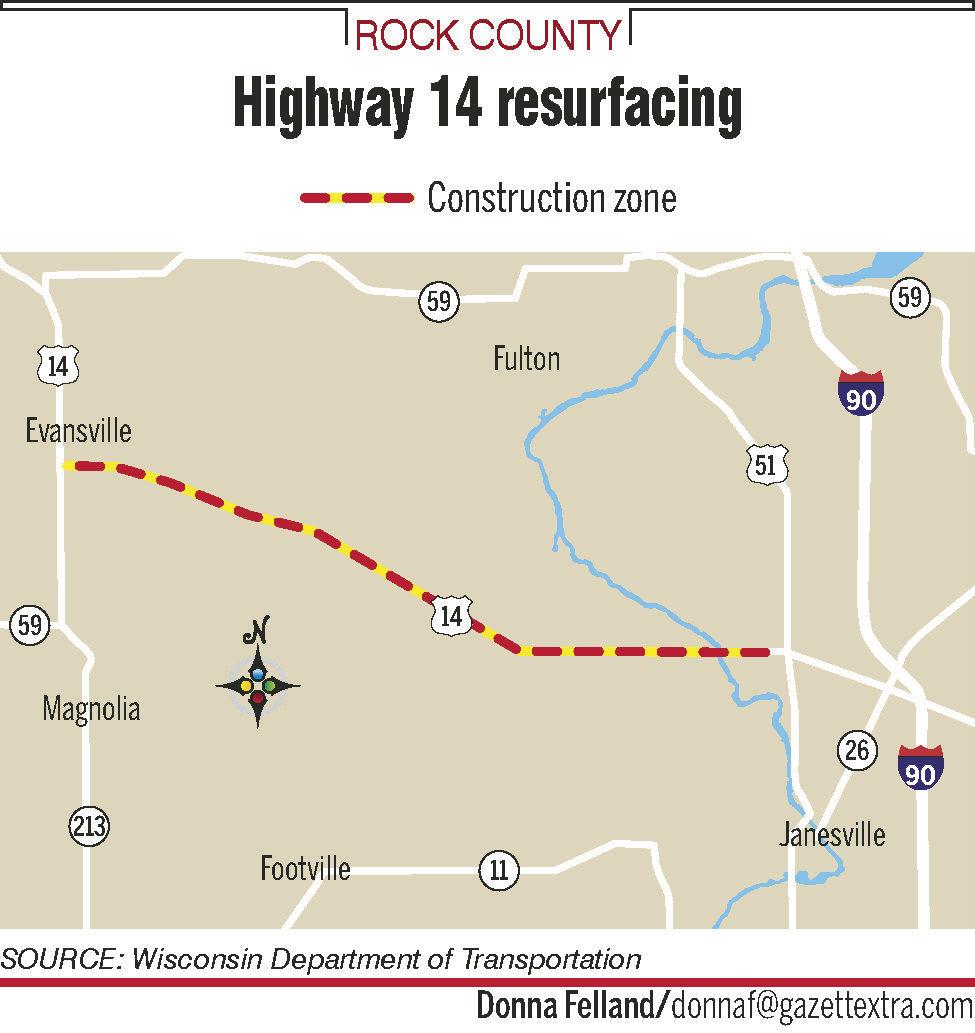 One commuter who drives from Janesville to Evansville every day told The Gazette last year that Highway 14 reminded him of the “Star Wars” scene in which spaceship pilots race through deep canyons on the surface of an enemy battleship.

But DOT project maps published in January show the agency plans to start grinding off the disintegrating road surface this year. The project also includes a complete resurfacing with 2 to 4 inches of new pavement, intersection changes and bridge maintenance.

The agency hasn’t offered a hard schedule for when the work will start.

In an email to The Gazette, DOT spokesman Michael Bie wrote that the agency wants to expedite the project because of the condition of Highway 14. He said the DOT is still working on a schedule for preliminary work this spring.

“The DOT is working to try to deliver the improvements in 2020 to address the condition of the roadway,” he wrote. “Construction in 2020 is tentative pending real estate and utility-related work, which must be completed prior to the start of construction. The determination of the construction schedule is expected by May.”

It would be the third time the project has been rescheduled but the first time the DOT has fast-tracked it since the project was announced in 2014.

Jorgenson said the county is not involved in planning the project, which could take three months. The federal government is paying for the bulk of it.

“We were talking with the DOT about how we needed to do something to try and hold that road together. It was primarily an effort to get it through just one more winter. And it was falling apart even as it was being patched,” Jorgensen said.

“It’s to the point it’s kind of hard to pick where you’d start and where you’d stop. There is still some areas, a lot of areas, that still need attention.” 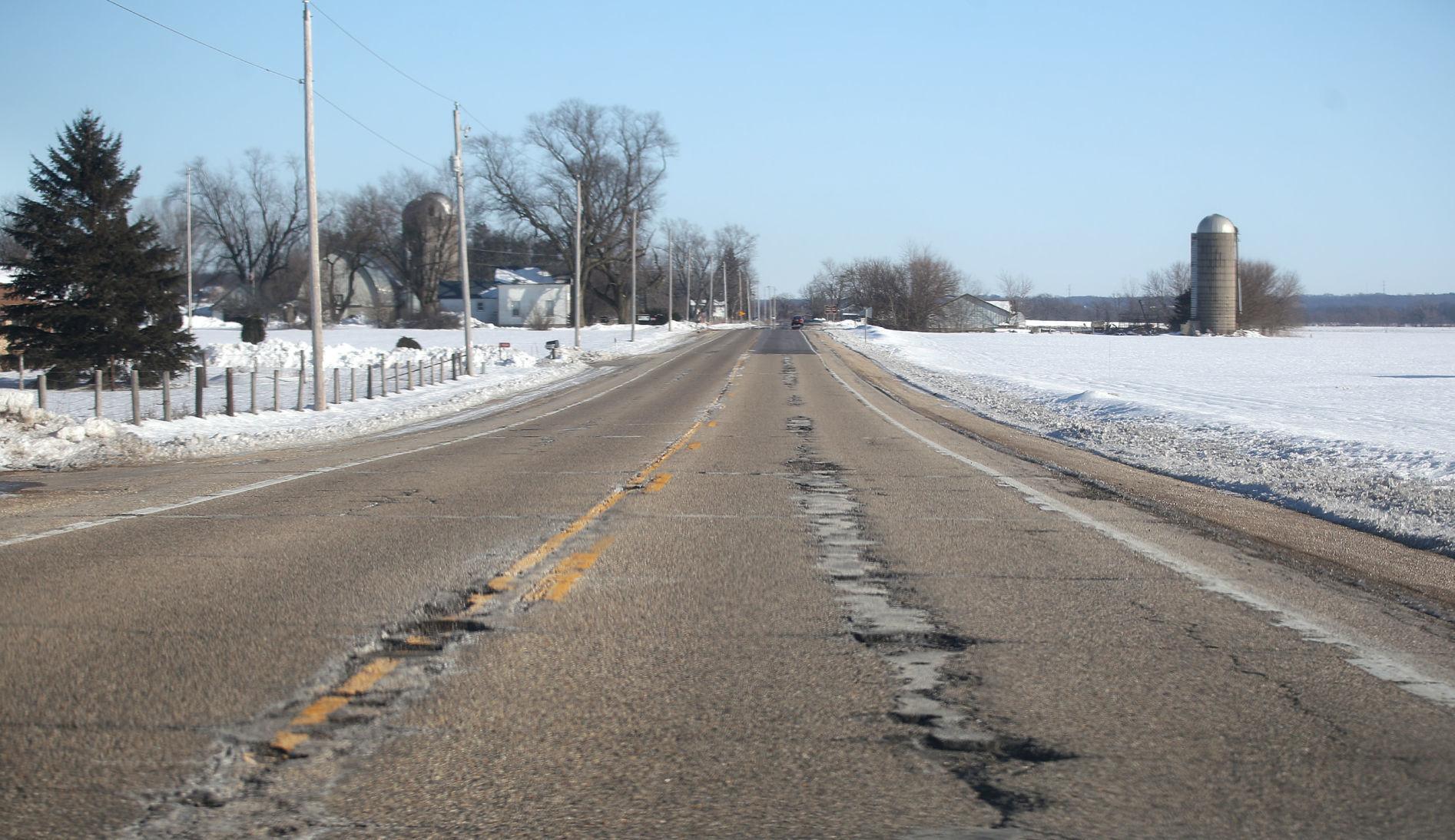 Highway 14 between Janesville and Evansville is disintegrating. The project to resurface 13 miles of the highway was scheduled to begin in 2021, but the state Department of Transportation decided to move the start time to later this year.

The Milton department will have one full-time firefighter and three paid on-premise firefighters available to respond to emergencies 24 hours a day Monday through Friday.

The on-premise firefighters will cover those hours in shifts. A fifth on-premise employee will join the four regular staff on weekends.

The number of volunteer firefighters has decreased in Milton, and the department was struggling to keep up with calls, said Rhodes, who implemented the staffing change Feb. 7.

“Basically, the volunteer system is broken. It’s gone, and we’re struggling,” he said.

The fire department had operated with one full-time firefighter/EMT and on-call firefighters who were paid for the time they spent on each call after they were dispatched. Under that setup, the department took too long to respond to emergencies and could not respond to multiple calls at once, despite a dedicated staff, Rhodes said.

It took the department 13 minutes to respond to a Dec. 26 residential fire in Milton, and the Janesville Fire Department beat Milton to its own fire, Rhodes said.

Earlier this month, one fire truck with two people responded to a car accident 35 minutes after the call.

The staffing change will speed up response times, Rhodes said. The department averaged 3.8 calls a day last month, which is the volume of a full-time station, he said.

“We’re blessed to have the good fire department that we have,” he said. “We’ve just got to figure out a way to get the trucks out the door.”

Moving that many firefighters to round-the-clock shifts will put the department $30,000 over budget, but money from other areas will help offset that, city Finance Director Dan Nelson said.

Nelson said he isn’t concerned about $10,000 in the short term, and it might not need to come from the fund balance. After tracking the staffing changes for a few months, the city can plan a long-term solution, he said.

The fire department has stayed under budget over the last few years, which will help if the department does need $10,000 from its general fund, Nelson said.

Commission members asked how the fire department will schedule staffers who are accustomed to on-call hours and might have other jobs. Rhodes said he’s hopeful the department can find staff to fill the hours.

Member Lynda Clark, who supported the staffing change, said the city’s investment in the fire department might pay off by encouraging more firefighters to join the department.

“I believe we need to go with this suggested budget, and hopefully as people see that we are doing more with our adding full-time people, then maybe we will get some more of that pool that are interested in coming in from outside areas,” she said.

“We really don’t have any options here because we have to keep these people (residents) safe.”

“I think our primary concern has got to be public safety, which means we’ve got to do something. This seems like the plausible step to take,” Wilson said.

Rhodes said he hopes the new setup will last for the next few years. After that, a full-time department with multiple full-time firefighters likely will be needed, he said.

Wilson said the commission will want a report in a few months to see whether the staffing change is helping firefighters respond more quickly to calls. 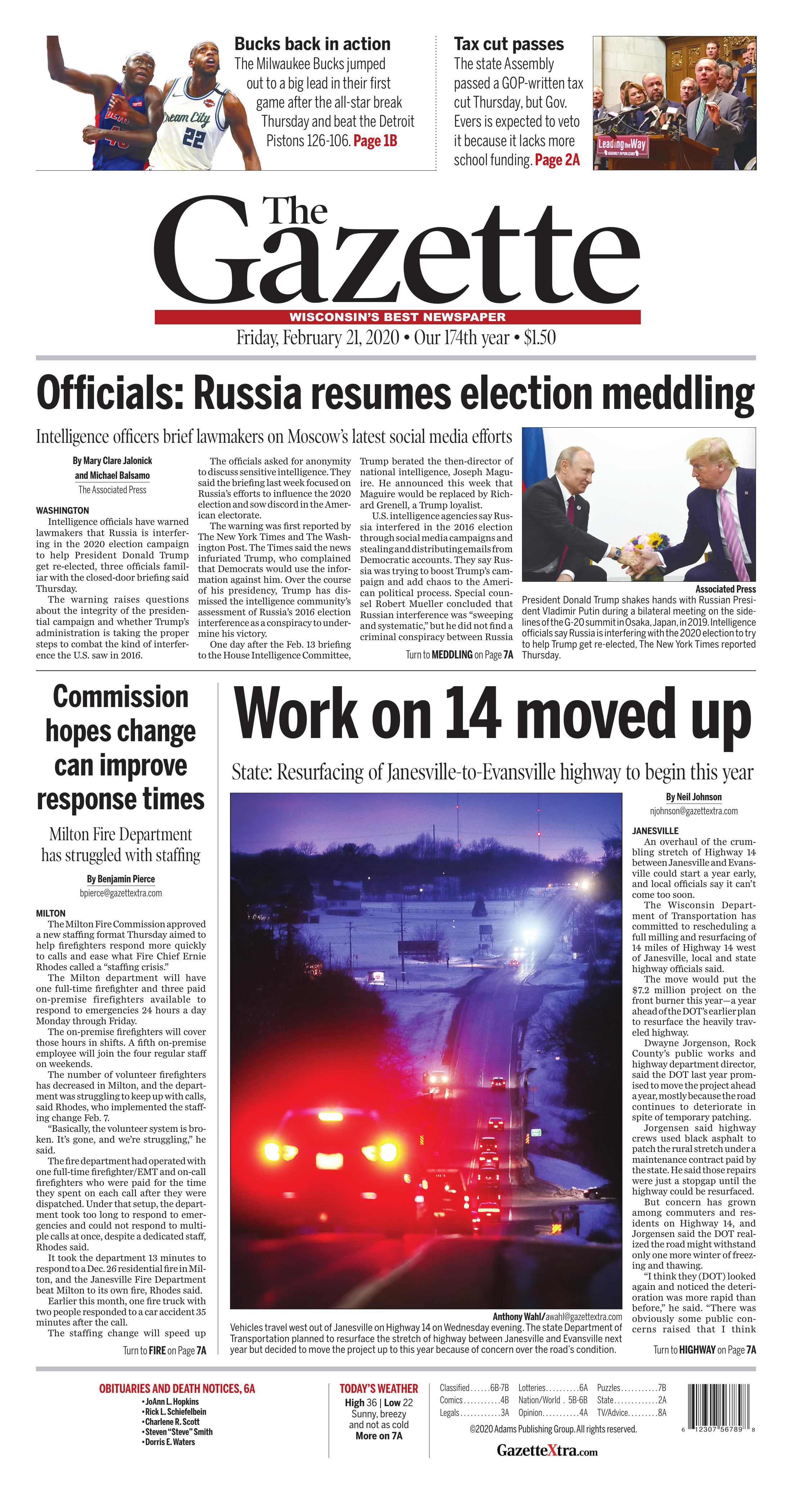