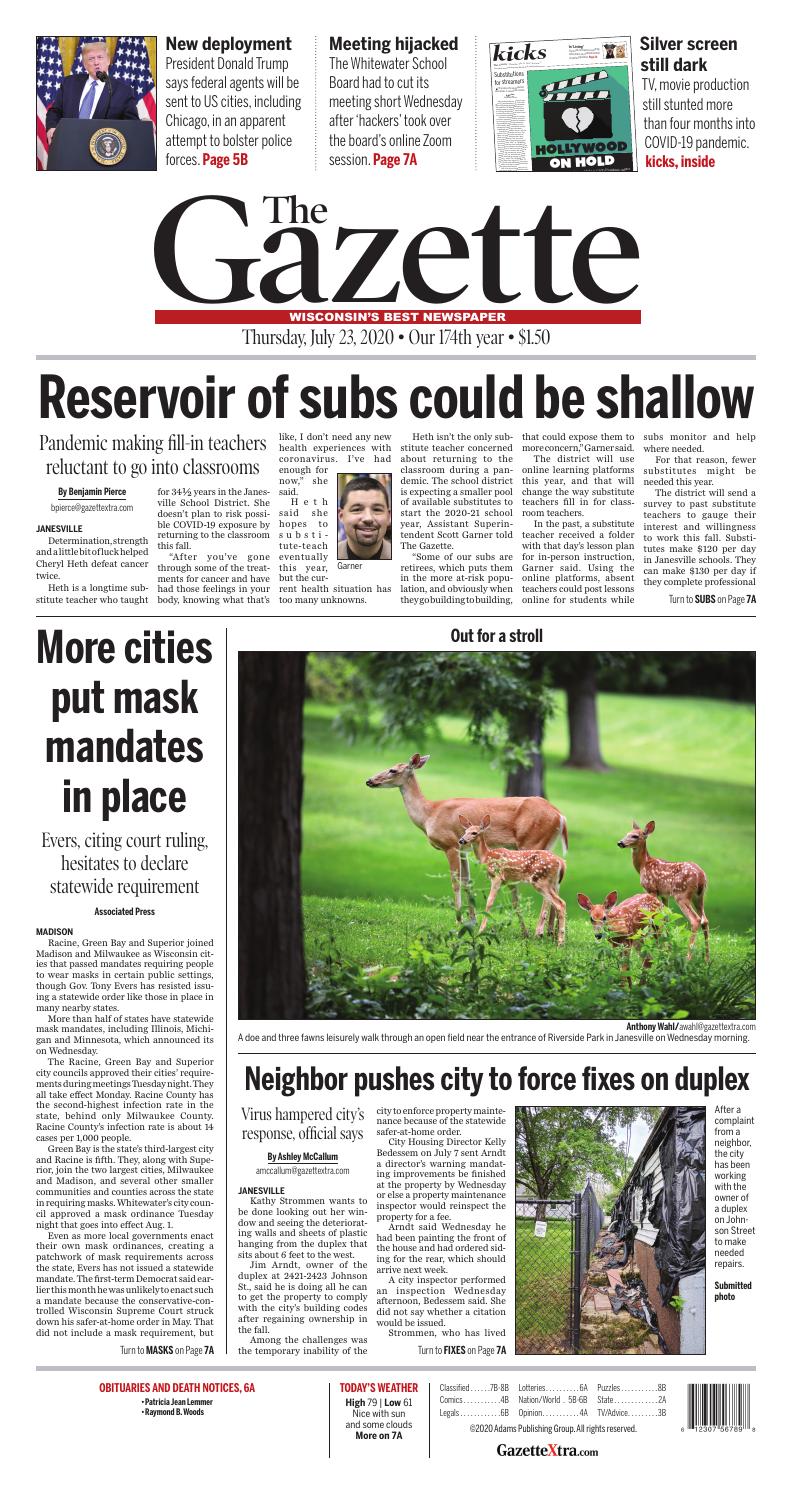 Education
top story
Substitute teachers could be harder to find this fall
By Benjamin Pierce bpierce@gazettextra.com

Heth is a longtime substitute teacher who taught for 34½ years in the Janesville School District. She doesn’t plan to risk possible COVID-19 exposure by returning to the classroom this fall.

“After you’ve gone through some of the treatments for cancer and have had those feelings in your body, knowing what that’s like, I don’t need any new health experiences with coronavirus. I’ve had enough for now,” she said.

Heth said she hopes to substitute-teach eventually this year, but the current health situation has too many unknowns.

Heth isn’t the only substitute teacher concerned about returning to the classroom during a pandemic. The school district is expecting a smaller pool of available substitutes to start the 2020-21 school year, Assistant Superintendent Scott Garner told The Gazette.

Under the plan, parents will be able to choose whether they want their children to learn in person or virtually. Students in middle and high school can also choose a combination of the two.

“Some of our subs are retirees, which puts them in the more at-risk population, and obviously when they go building to building, that could expose them to more concern,” Garner said.

The district will use online learning platforms this year, and that will change the way substitute teachers fill in for classroom teachers.

In the past, a substitute teacher received a folder with that day’s lesson plan for in-person instruction, Garner said. Using the online platforms, absent teachers could post lessons online for students while subs monitor and help where needed.

For that reason, fewer substitutes might be needed this year.

The district will send a survey to past substitute teachers to gauge their interest and willingness to work this fall. Substitutes make $120 per day in Janesville schools. They can make $130 per day if they complete professional development.

Masks and other protective equipment will be available for substitute teachers who work in the schools, Garner said.

As parents in the Janesville School District weigh how to send their children back to school this fall, teachers are also preparing for an academic year unlike any other.

Debra Hilger taught chemistry at Parker High School for 19 years until she retired in 2017. She began substitute teaching shortly afterward.

Hilger has health concerns because of her severe allergies, but she plans to be on the list of substitute teachers this fall.

“I know how to be as safe as I can be, and I’m one of those that does want to be as safe as possible,” she said. “I’m hoping that the districts I sub in will take the necessary requirements to keep us safe.”

She knows other subs who are taking the year off because of COVID-19 and wishes masks were required.

“I really hope parents keep in touch with their kids and communicate the urgency of following the rules and staying safe,” Heth said. “If there was ever a good time for the best possible parenting, it’s now. That goes for everything from mental well-being to physical safety.”

Government
Owner says he's doing what he can to fix property neighbor considers an eyesore
By Ashley McCallum amccallum@gazettextra.com

After a complaint from a neighbor, the city has been working with the owner of a duplex on Johnson Street in Janesville to make needed repairs. The city reinspected the property Wednesday.

Kathy Strommen wants to be done looking out her window and seeing the deteriorating walls and sheets of plastic hanging from the duplex that sits about 6 feet to the west.

Jim Arndt, owner of the duplex at 2421-2423 Johnson St., said he is doing all he can to get the property to comply with the city’s building codes after regaining ownership in the fall.

Among the challenges was the temporary inability of the city to enforce property maintenance because of the statewide safer-at-home order.

City Housing Director Kelly Bedessem on July 7 sent Arndt a director’s warning mandating improvements be finished at the property by Wednesday or else a property maintenance inspector would reinspect the property for a fee.

Arndt said Wednesday he had been painting the front of the house and had ordered siding for the rear, which should arrive next week. 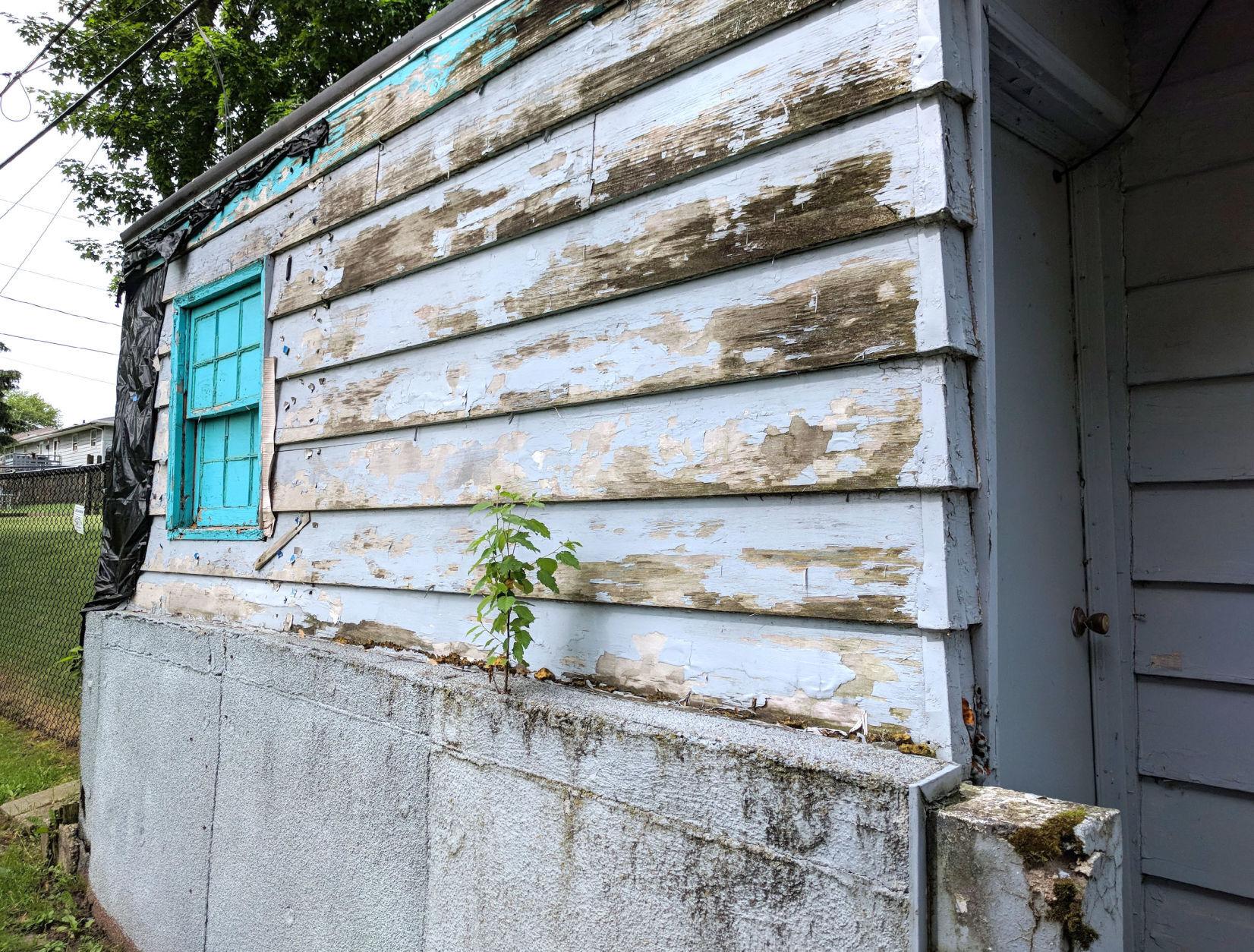 After a complaint from a neighbor, the city has been working with the owner of a duplex on Johnson Street to make needed repairs.

A city inspector performed an inspection Wednesday afternoon, Bedessem said. She did not say whether a citation would be issued.

Strommen, who has lived at the adjacent property for about 25 years, said she wants to see the property fixed and has concerns about her property value declining.

“I don’t meant to be petty about it, but if they’re not taking care of the building, what makes you think they will care about anything else?” Strommen said.

Strommen said there have been concerns about the state of the building for years, but they subsided when the previous owner was living there.

But when the last owner died, Strommen said the building fell into further disrepair, leading her to reach out to city workers and the city council for help.

The city in September issued Arndt an order to repair exterior walls and siding by Oct. 21, according to city documents. That order was issued less than a week after Strommen made a complaint to the city’s Neighborhood and Community Services Department.

Strommen has continued to correspond with the city over the property and thinks the city has been too accommodating in pushing for repairs.

Director of Neighborhood and Community Services Jennifer Petruzzello in a June 8 email to Strommen said Arndt did not regain ownership of the property until November, when the weather makes it difficult to make exterior repairs.

Arndt had been party to a land contract with a man who died last year. It took months for him to take ownership of the property, Arndt said.

The city granted Arndt an extension to have the property up to code by spring, Petruzzello said. 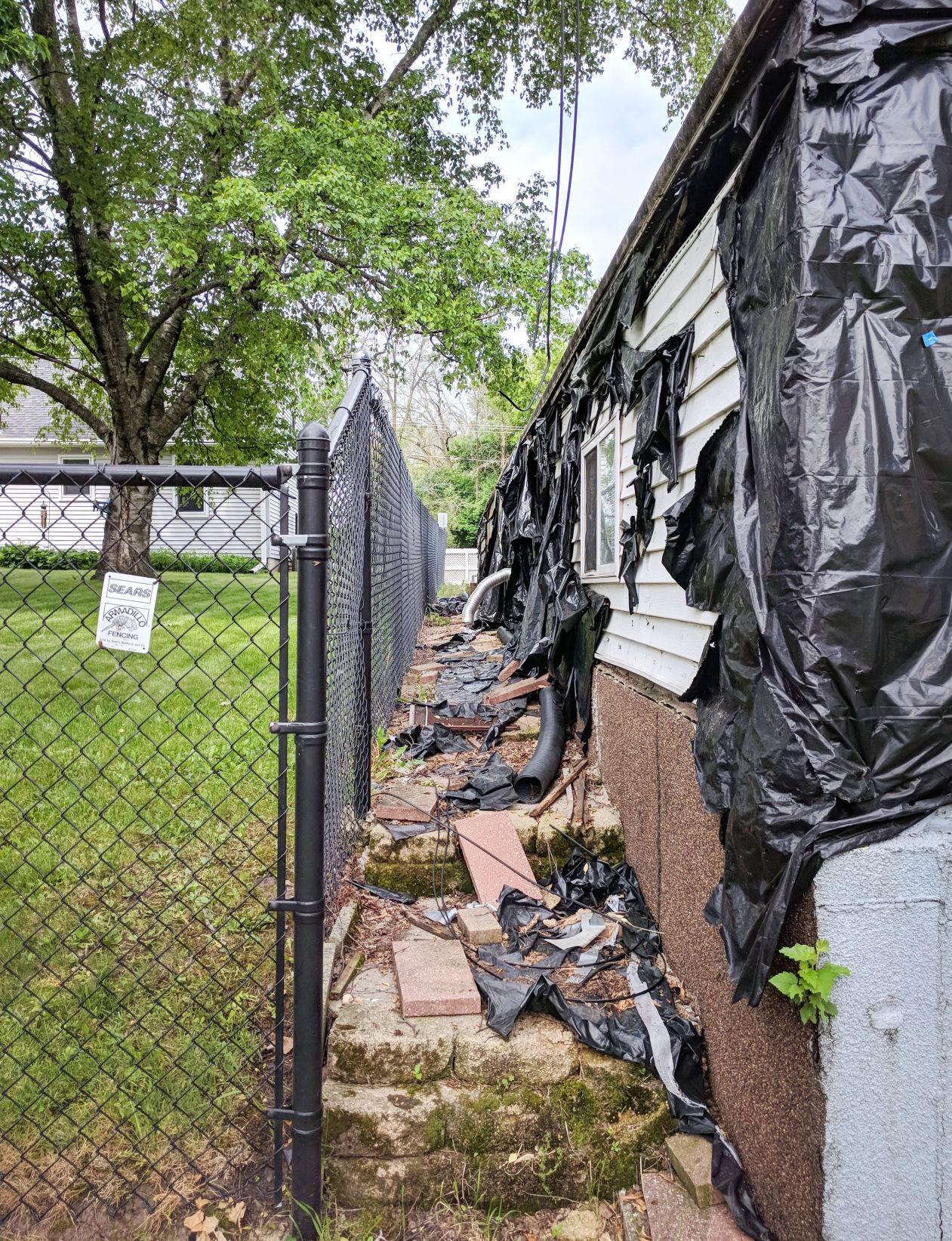 After a complaint from a neighbor, the city has been working with the owner of a duplex on Johnson Street to make needed repairs.

Then the coronavirus pandemic and ensuing statewide safer-at-home order halted the city’s property maintenance enforcement activities from March 24 to May 21, Petruzzello said.

Arndt says the building is “completely habitable” but does need some paint and work on the exterior. Tenants currently live in the building, he said.

Strommen said she finds it “sad” the property has been kept in such a state.

Arndt owns several rental properties in Janesville and said it is difficult to devote a lot of time at once to a single property.

The work needed on the duplex is routine, Arndt said, and he intends to put it on the fast track.

“This is my life’s work,” Arndt said. “I have no intention of walking away.”

Racine, Green Bay and Superior joined Madison and Milwaukee as Wisconsin cities that passed mandates requiring people to wear masks in certain public settings, though Gov. Tony Evers has resisted issuing a statewide order like those in place in many nearby states.

More than half of states have statewide mask mandates, including Illinois, Michigan and Minnesota, which announced its on Wednesday.

Green Bay is the state’s third-largest city and Racine is fifth. They, along with Superior, join the two largest cities, Milwaukee and Madison, and several other smaller communities and counties across the state in requiring masks. Whitewater’s city council approved a mask ordinance Tuesday night that goes into effect Aug. 1.

Even as more local governments enact their own mask ordinances, creating a patchwork of mask requirements across the state, Evers has not issued a statewide mandate. The first-term Democrat said earlier this month he was unlikely to enact such a mandate because the conservative-controlled Wisconsin Supreme Court struck down his safer-at-home order in May. That did not include a mask requirement, but the court said Evers overstepped his authority by requiring most nonessential businesses to close during the start of the outbreak.

Cases of COVID-19 have spiked in Wisconsin since mid-June, hitting a single-day record high of 1,117 new confirmed cases Tuesday.

“The governor continues to be concerned about the increases in cases we’re seeing across our state and is evaluating additional steps we can take to help prevent further spread of COVID-19,” Evers’ spokeswoman Britt Cudaback said Wednesday. “We encourage folks to stay home, limit their social interactions and travel, and wear masks whenever they go out to help flatten the curve and keep our families, neighbors and communities safe.”

Even so, pressure was building among Democrats for Evers to take action.

“Wisconsin needs a mask mandate,” tweeted Democratic state Sen. Chris Larson of Milwaukee, the city with the highest number of COVID-19 cases and deaths in the state.

Evers did issue a mandate earlier this month for state executive branch employees to wear masks while working in state buildings.

Republicans who control the Legislature and who could vote to pass a statewide mask mandate have shown little to no interest in doing that. Assembly Speaker Robin Vos and Senate Majority Leader Scott Fitzgerald have both spoken out against a statewide mask requirement. Fitzgerald has also insisted that employees of the Senate do not need to wear masks when at work in the Capitol.

“I won’t be pushed around by Dane County or the Evers Administration—we control the Senate wing,” Fitzgerald said this month when mask mandates for Dane County and state workers took effect. “Senators should be able to decide what they do in their own offices.”

Health officials around the world and in Wisconsin have pointed to wearing masks as one of the most effective ways to slow the spread of the virus. President Donald Trump, who for months resisted wearing a face covering in public, on Tuesday encouraged them to be worn. Trump tweeted a photo of himself in a face mask Monday, calling it an act of patriotism. 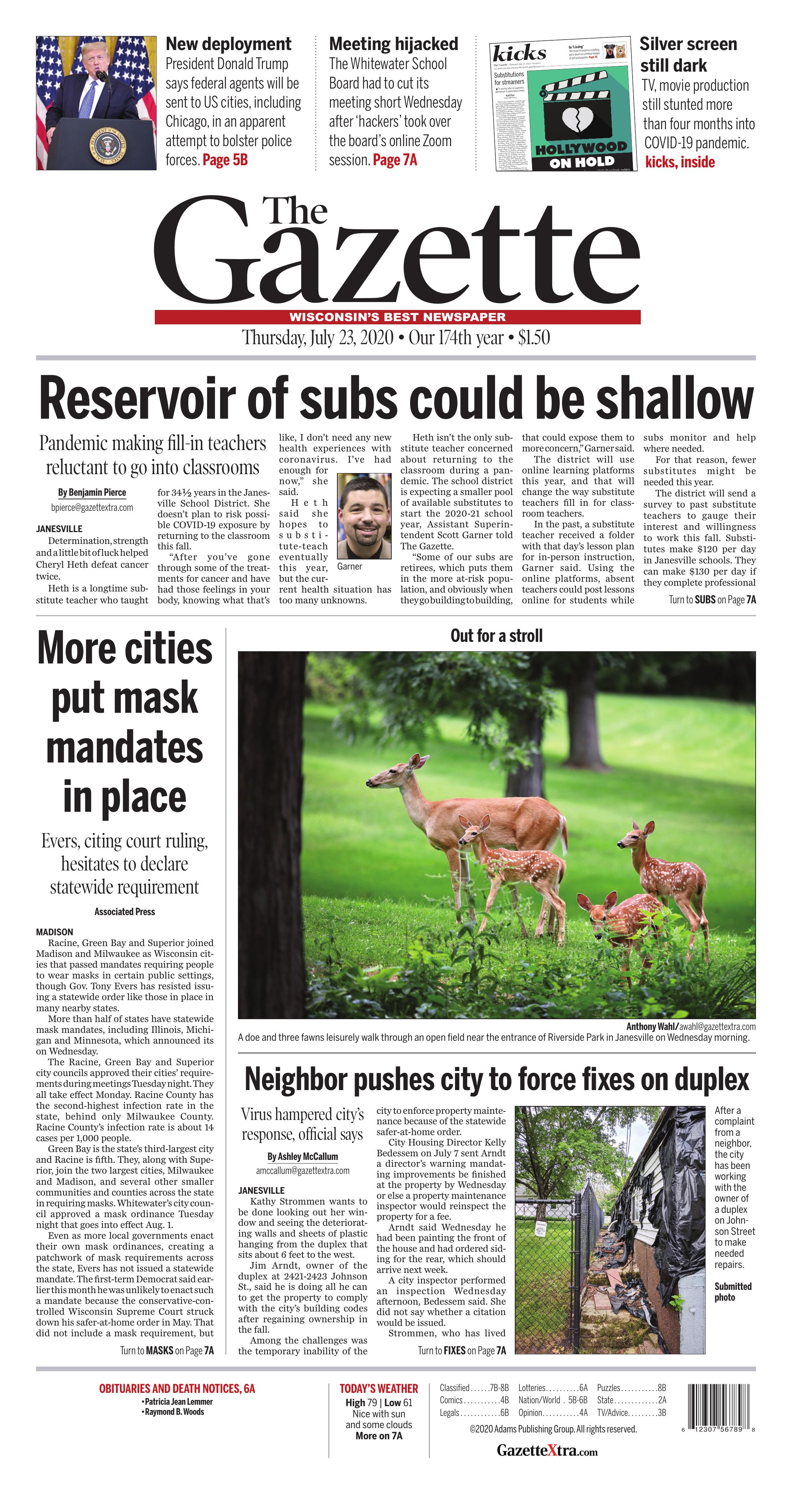