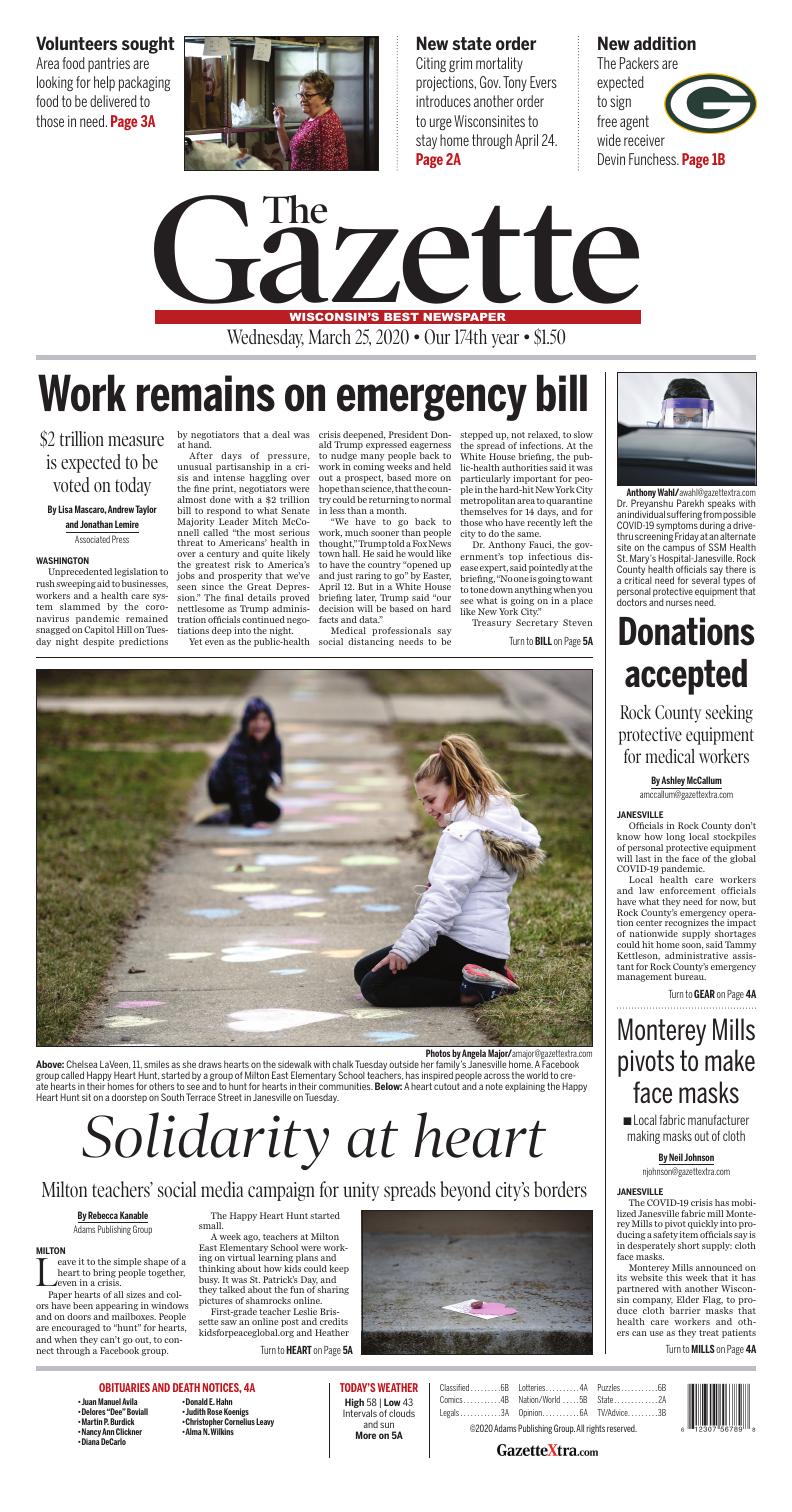 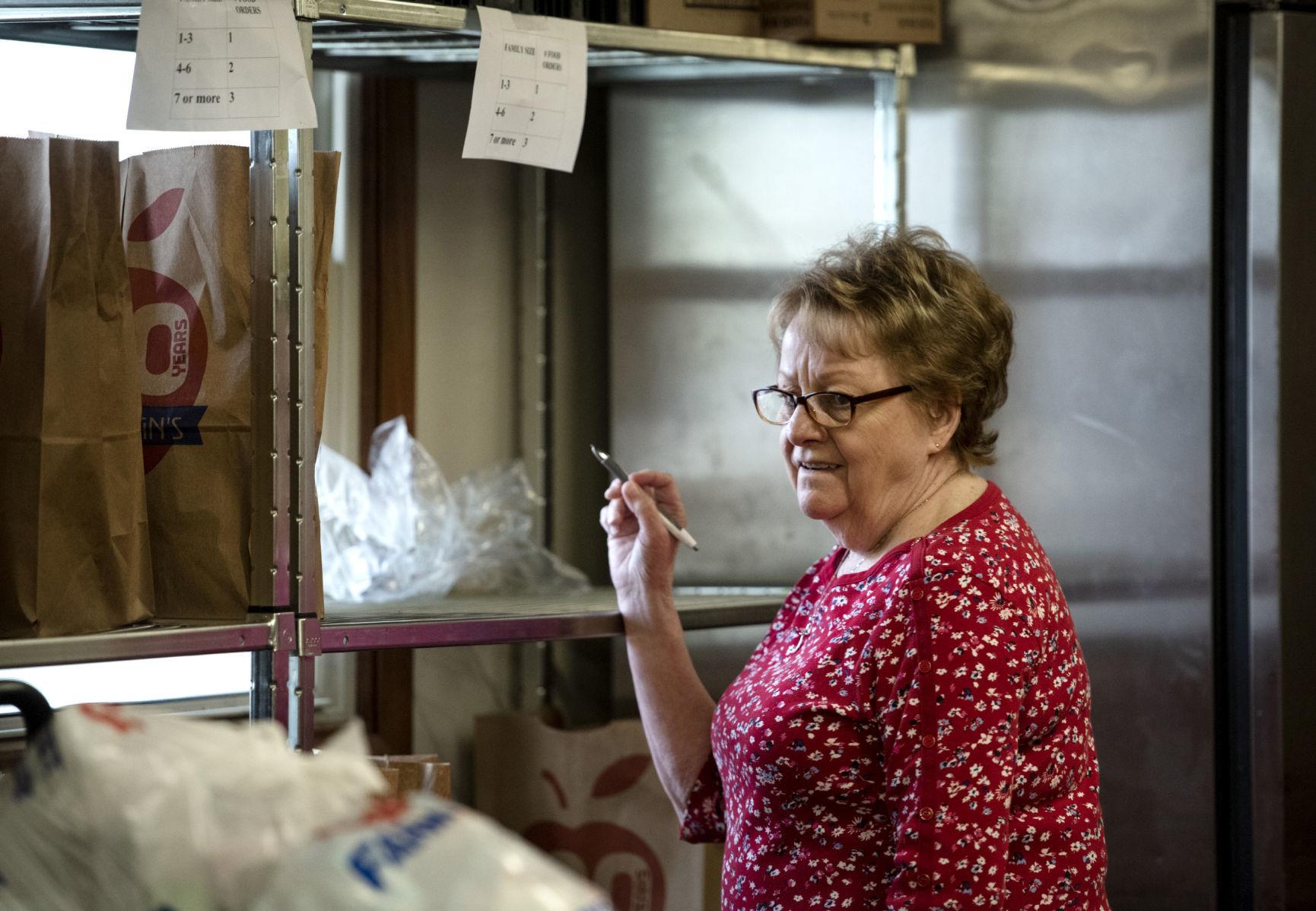 Chelsea LaVeen, 11, smiles as she draws hearts on the sidewalk with chalk Tuesday outside her family's Janesville home. A Facebook group called Happy Heart Hunt has inspired people across the world to create hearts in their homes for others to see and to hunt for hearts in their communities.

Caleb LaVeen, 13, places a heart cutout and a note on a neighbor’s doorstep Tuesday in Janesville.

A heart cutout and a note explaining the Happy Heart Hunt sits on a South Terrace Street doorstep on Tuesday.

A home in Janesville displays a large heart Tuesday.

Leave it to the simple shape of a heart to bring people together, even in a crisis.

Paper hearts of all sizes and colors have been appearing in windows and on doors and mailboxes. People are encouraged to “hunt” for hearts, and when they can’t go out, to connect through a Facebook group.

A week ago, teachers at Milton East Elementary School were working on virtual learning plans and thinking about how kids could keep busy. It was St. Patrick’s Day, and they talked about the fun of sharing pictures of shamrocks online. 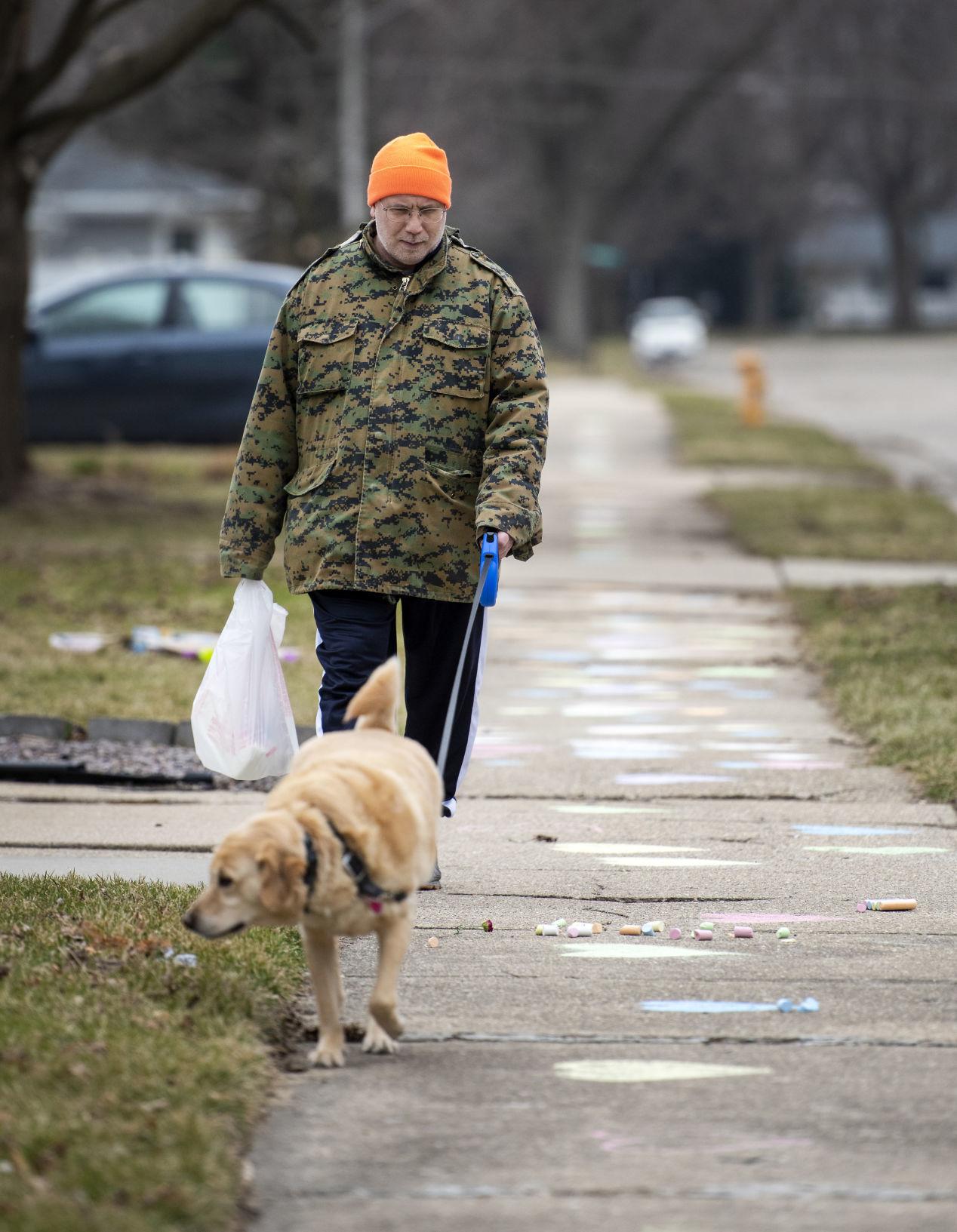 Brissette liked the idea of displaying hearts in windows, but she thought people should have a place to post pictures of them.

On March 18, she created a public Facebook group called Happy Heart Hunt and urged people to participate: “As you drive around and find hearts in people’s window, take pictures and post here for fun.”

Although the initial goal was to keep kids busy making hearts, the project became much more. People of all ages have been creating hearts and looking for them. 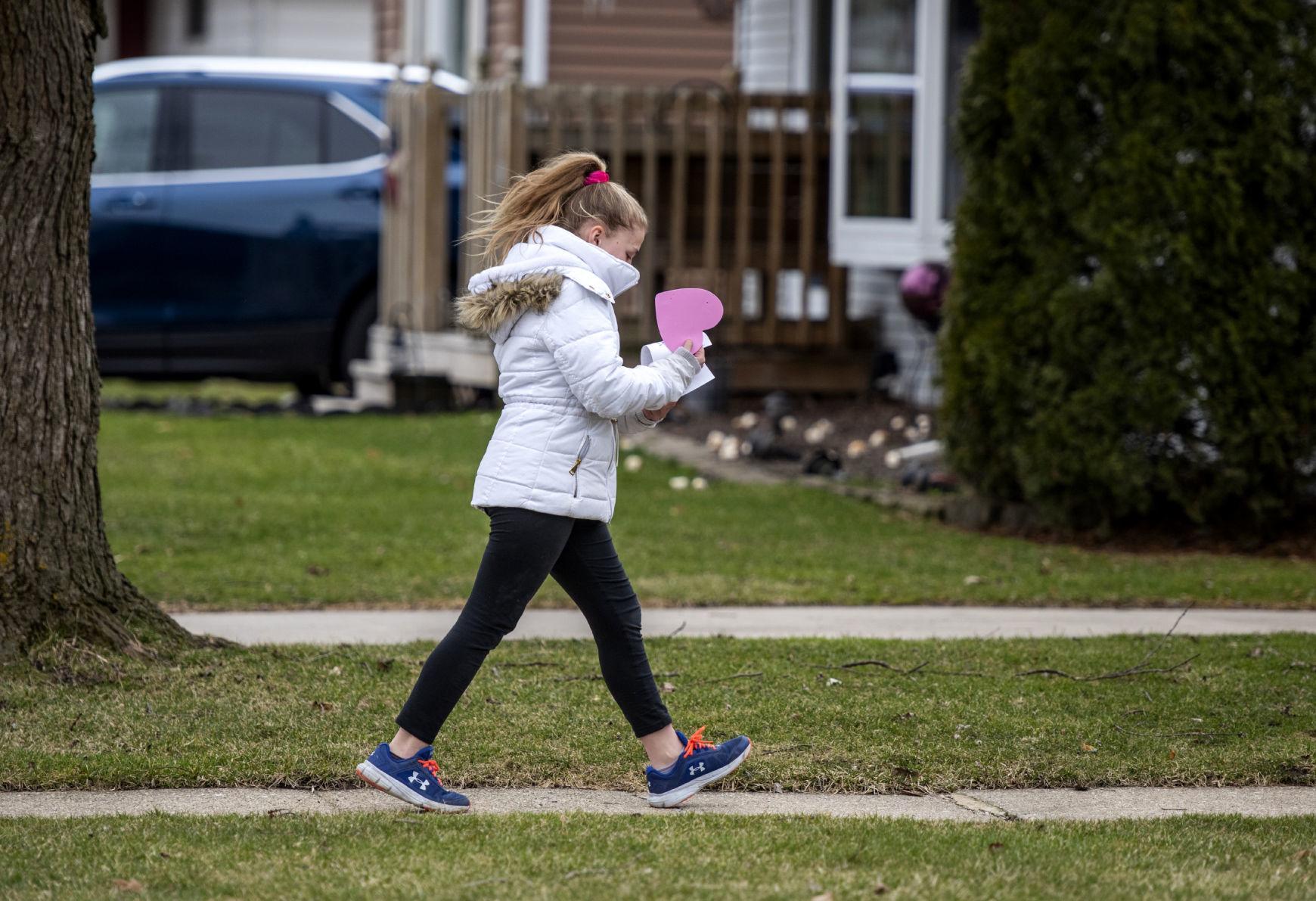 Chelsea LaVeen walks up to a neighbor’s house with a heart cutout Tuesday in Janesville.

“It’s looking for something to make you feel positive,” she said. “I think that’s the big message.”

Brissette has driven around the city of Milton and seen quite a few hearts in the windows of homes and businesses. Even the library has gotten into it.

“It’s spreading faster than I ever imagined,” she said. “I didn’t think it would go beyond our area.”

Today, the group has 24,330 members, including some from other states, the UK and Russia.

“It seems that people just need something happy during this time and are really enjoying this idea of spreading happiness through hearts,” Brissette said. 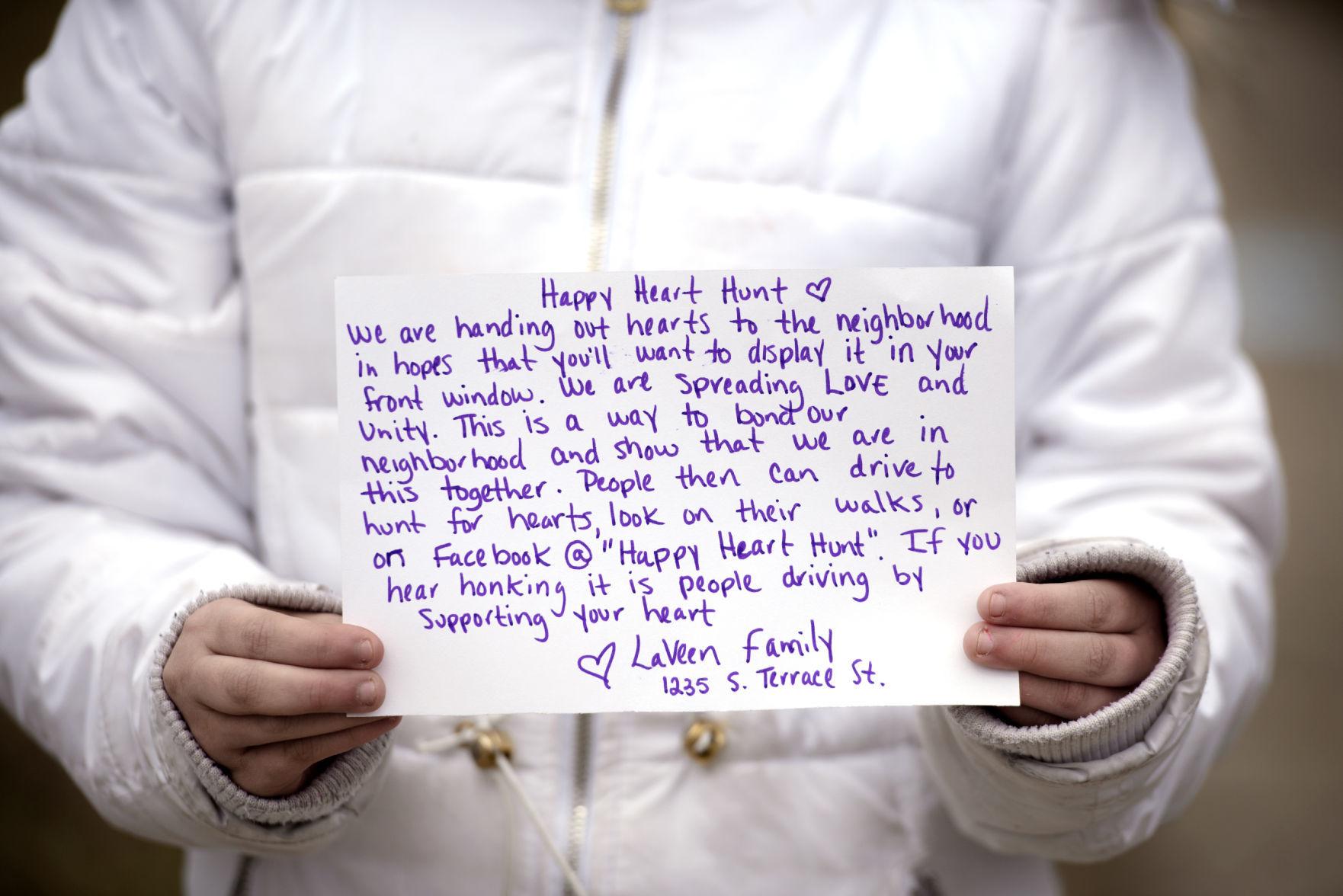 The teachers originally thought kids could make different shapes, including dinosaurs or Easter eggs. But with so many people joining the Happy Heart Hunt, Brissette said it would be confusing to change now.

On Sunday, she posted: “(The symbol) will be hearts forever, and if you want to add other things, go for it.”

Posts show rainbows of hearts and hearts with messages.

“Now people are taking it to the next level and taking pictures that they find of hearts in nature and everywhere they find them,” Brissette said. “I’ve seen a lot of hearts on pets—their nose is a heart or their fur.”

Christmas lights are going back up, and people are hanging lights on their windows to frame their hearts.

“People are so creative,” she said.

After making hearts for their windows, Milton High School junior Allison Slatter and a friend painted the rock outside the high school Saturday. 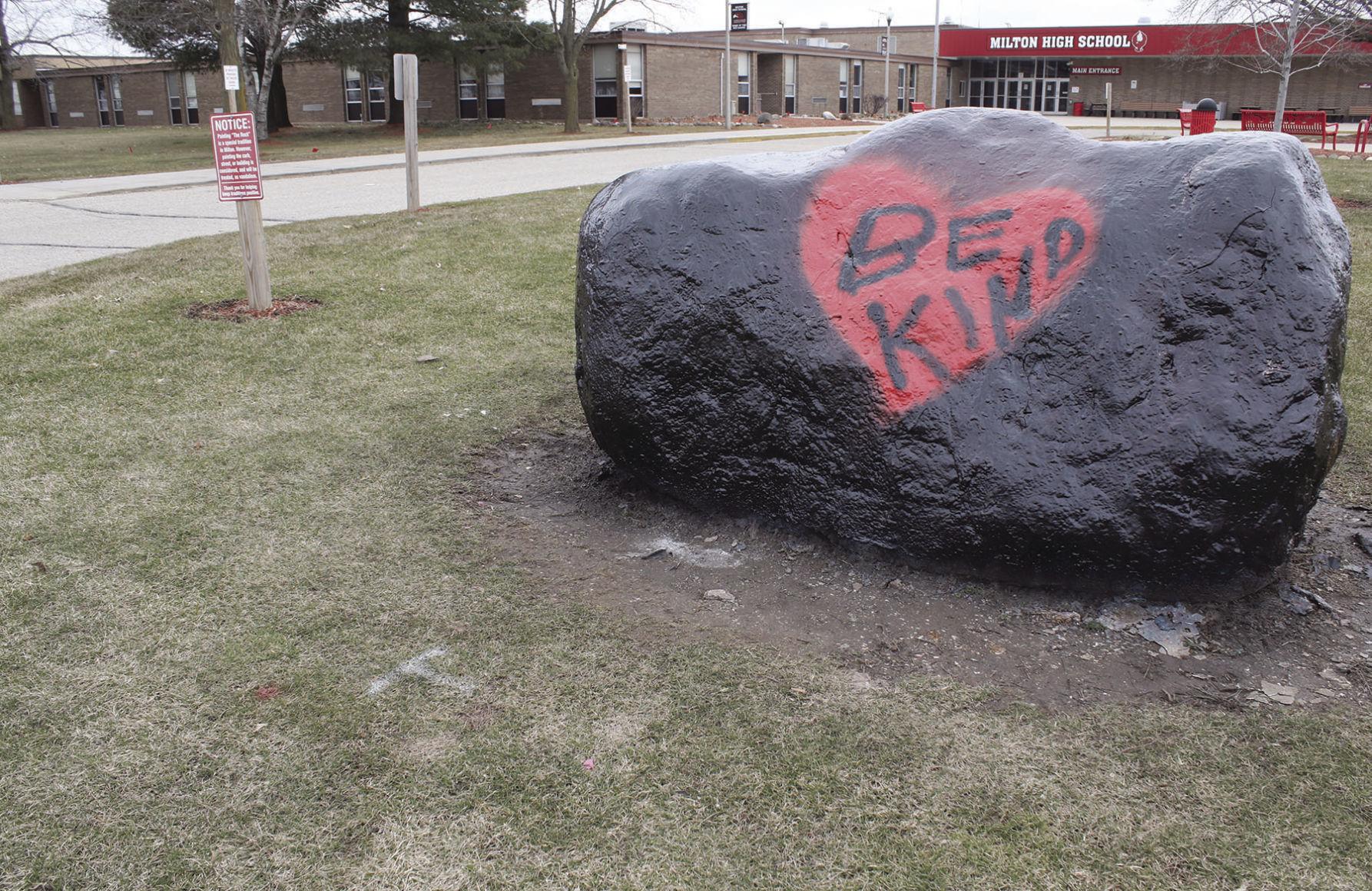 Allison Slatter, a junior at Milton High School, was inspired by the Happy Heart Hunt and the importance of spreading kindness during these uncertain times. She and a friend painted the high school rock Saturday.

“So many people drive by the Milton High School rock on a daily basis, that painting a positive message could only do good by focusing on kindness instead of dwelling on the negativity and the unknown,” Slatter wrote on Facebook.

A heart is a universal message of love, Brissette said.

“I feel like it’s become a message of happiness and ‘We’re all in this together.’”

Dr. Preyanshu Parekh speaks with an individual suffering from possible COVID-19 symptoms during a drive-thru screening Friday at an alternate site on the campus of SSM Health St. Mary’s Hospital-Janesville. Rock County health officials say there is a critical need for several types of personal protective equipment that doctors and nurses need.

Officials in Rock County don’t know how long local stockpiles of personal protective equipment will last in the face of the global COVID-19 pandemic.

To combat shortages, Rock County is asking community members and business leaders to donate any protective masks, gloves, face shields, protective gowns or other equipment they have to the county’s stockpile.

Donations are preferred, but the county will consider buying equipment from businesses, Kettleson said.

Rock County will receive some items from the strategic national stockpile, which state officials began distributing this week.

Local officials do not know how much or what kind of equipment the county will receive from the stockpile, Kettleson said.

So far, health care workers and first responders are seeing equal need for equipment, she said.

County officials are not managing or keeping track of ventilators, which are needed to care for people hospitalized by COVID-19, Kettleson said.

The Rock County Public Health Department declined to share if any Rock County patients have been hospitalized because of COVID-19.

“Because COVID-19 affects individuals differently based on a variety of factors, the number of hospitalizations does not provide a representative picture of the local COVID-19 situation,” said public health officer Marie-Noel Sandoval in a news release.

Barb Bortner, vice president at Mercyhealth, said ventilators are needed only in “certain situations,” and the hospital’s incident command team is working to make sure the hospital has enough.

A spokeswoman for SSM Health St. Mary’s Hospital-Janesville did not respond to a question regarding ventilators.

Bortner said Mercyhealth has received an “awesome outpouring of community support” in the form of personal protective equipment donations.

“We are seeing the best of people during this national crisis and want to thank them,” Bortner said.

Mercyhealth workers are not allowed to bring any personal protective equipment they have at home into work with them, Bortner said.

She did not elaborate on why.

Mercyhealth is accepting donations of homemade cloth masks but will reserve them in case of emergency, Bortner said.

SSM Health spokeswoman Erica Mathis gave the following information in a statement to The Gazette.

“Our caregivers have what they need to safely deliver care. However, these items are in high-demand nationwide and supplies are limited.

“Like other health systems across the country, we are working to conserve supplies as well as finding new supply sources for certain items. This is necessary to ensure we continue to have what we need in the days and weeks ahead.”

Those looking to donate should know the number of items available, cost of items and contact information.

Donations to Mercyhealth will be accepted from 9 a.m. to 3 p.m. Monday to Friday at the entrances of Mercyhealth Hospital and Trauma Center, Janesville.

Rock County health officials have listed the following items as being in critical need.

Monterey Mills announced on its website this week that it has partnered with another Wisconsin company, Elder Flag, to produce cloth barrier masks that health care workers and others can use as they treat patients during the coronavirus pandemic.

The two companies have produced enough new masks to supply one Wisconsin regional health care system with an initial 20,000 masks, which Monterey Mills says are washable and reusable.

As one of the biggest producers of knitted-pile fabric in the U.S., Monterey Mills normally makes products for paint rollers, buffing pads, wash mitts, apparel and other cloths used in the medical field.

President Dan Synkin said in a statement this week that Monterey now has the “fabric inventory and manufacturing capacity to produce millions of masks” to help ease a national shortage of personal protective equipment.

The company’s partner, Oak Creek-based Elder Flag, has converted part of its flag-sewing operation to produce the masks, Monterey officials said. The two companies are now hunting for more “trim components” such as elastic and additional partners to cut and sew the masks.

A company spokesperson was not immediately available to comment on how operations at Monterey Mills are responding to the shift in production.

Phone calls to the company went to an auto message that indicated Monterey had long call wait times linked to its new foray into barrier masks.

Company officials say the masks are intended for “front-line” responders who have daily contact with those who could be infected with COVID-19. The disease has already infected hundreds of people—and possibly more—in Wisconsin.

The company said doctors have reviewed the design of the mask, which looks similar to a cloth surgical mask but with a soft, fleece-like nap and a conspicuous “Made in the USA” tag. They’re designed to be reversible so either side can protect wearers’ faces.

The masks are being marketed through a company ordering hotline and via website safeusamasks .com.

The company said it will give ordering priority to hospital and clinic operators, police agencies and “anyone working among the general public during these challenging times.”

The company has shifted production before during times of national need, including in 2010, when it geared the plant to produce wool fabric intended to soak up oil on beaches after BP’s Deepwater Horizon spill in the Gulf of Mexico. 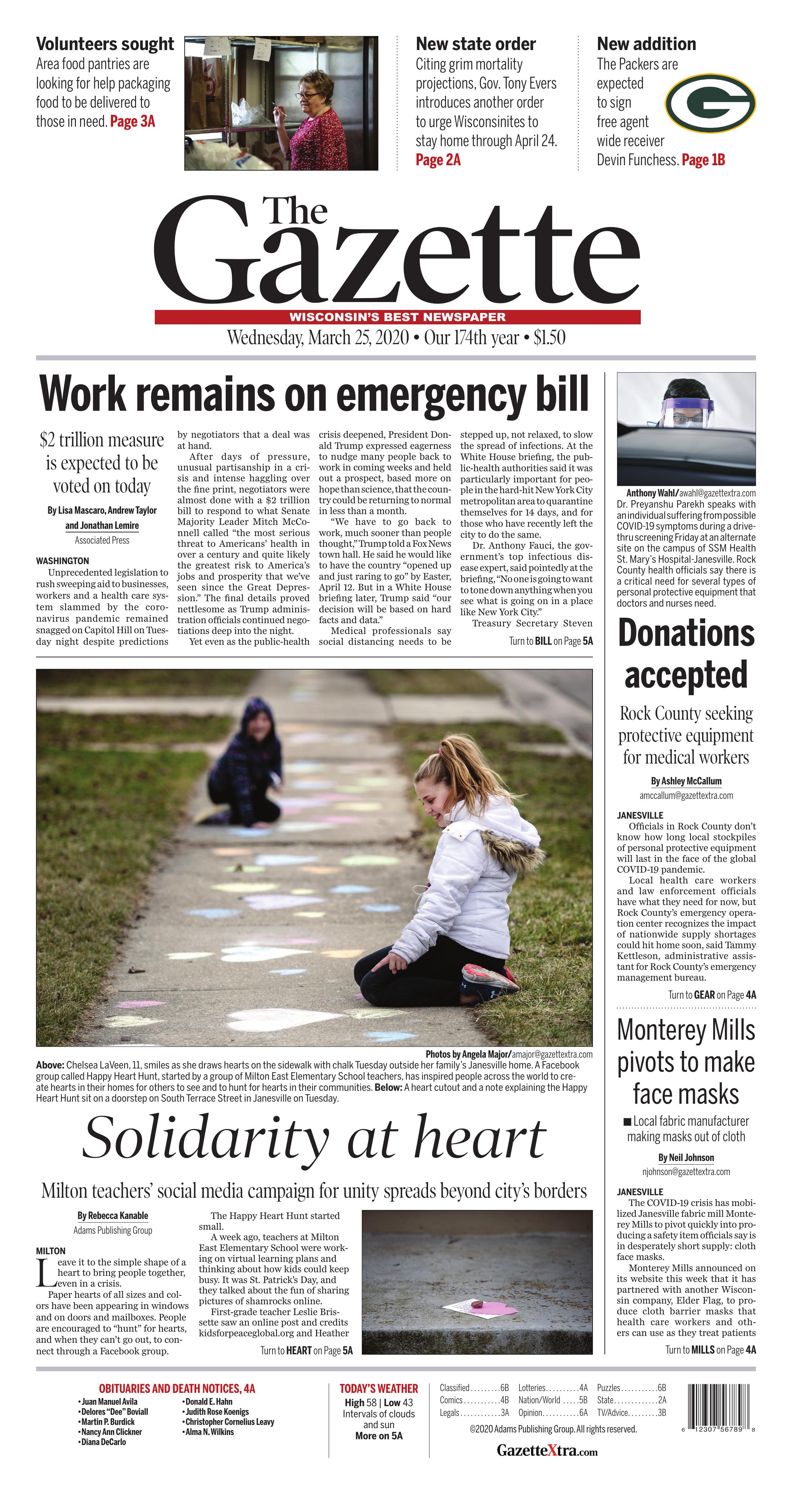