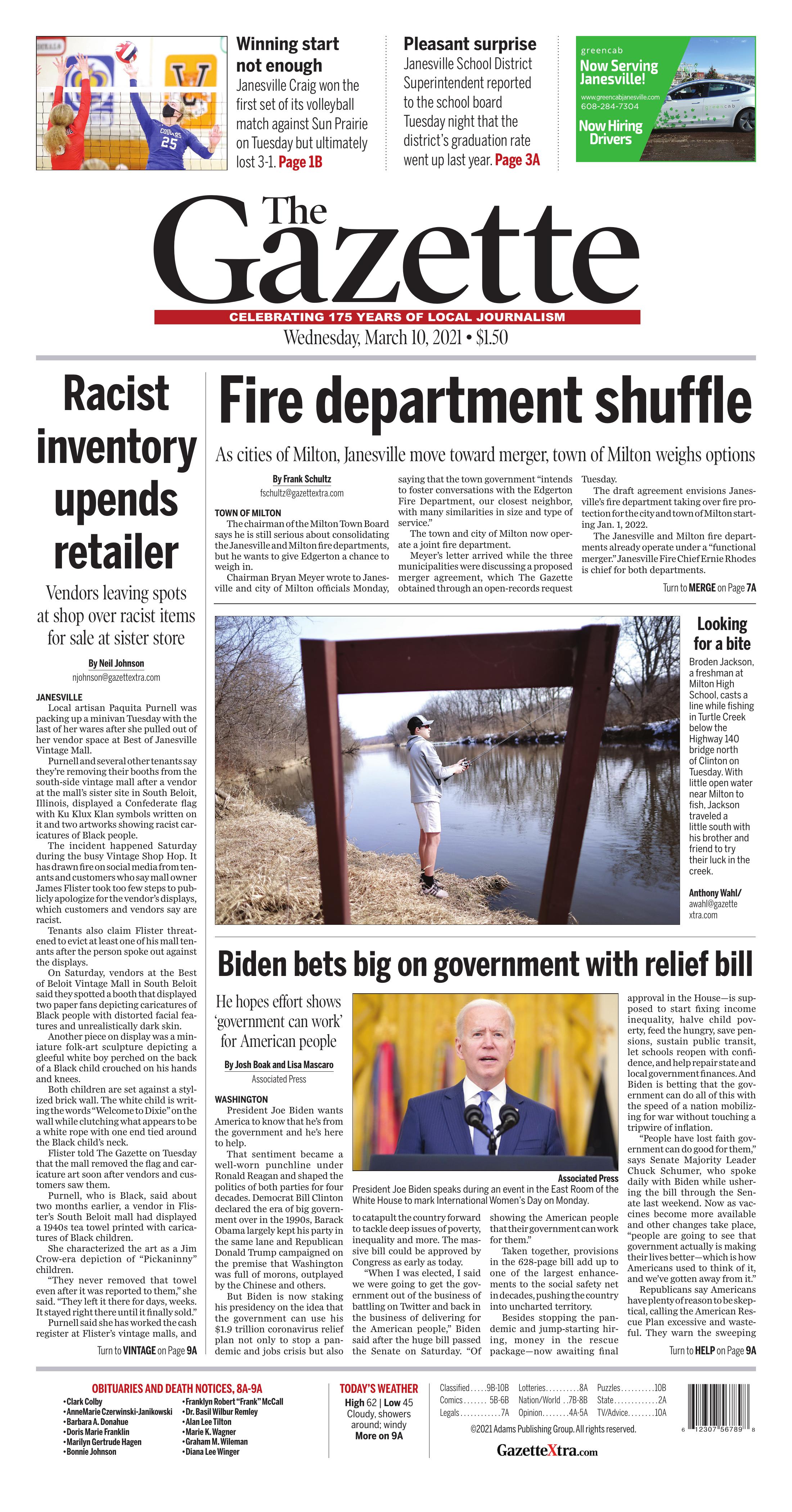 A Milton fire truck responds to a Janesville fire call earlier this year.

The chairman of the Milton Town Board says he is still serious about consolidating the Janesville and Milton fire departments, but he wants to give Edgerton a chance to weigh in.

Chairman Bryan Meyer wrote to Janesville and city of Milton officials Monday, saying that the town government “intends to foster conversations with the Edgerton Fire Department, our closest neighbor, with many similarities in size and type of service.”

The town and city of Milton now operate a joint fire department.

Meyer’s letter arrived while the three municipalities were discussing a proposed merger agreement, which The Gazette obtained through an open-records request Tuesday.

The draft agreement envisions Janesville’s fire department taking over fire protection for the city and town of Milton starting Jan. 1, 2022.

The Janesville and Milton fire departments already operate under a “functional merger.” Janesville Fire Chief Ernie Rhodes is chief for both departments.

Meyer told The Gazette that town officials have not talked to Edgerton officials, but they intend to approach Edgerton and explore the possibility of options other than a complete consolidation with Janesville.

Edgerton officials could not be reached for comment Tuesday.

At the same time, Meyer said he hopes the discussion with Edgerton doesn’t slow the process with Janesville.

“I want to stress we take these negotiations with Janesville very seriously,” Meyer said. “… I don’t want the public or any municipal bodies to be concerned that we are not interested or don’t take that seriously.”

But it would be “irresponsible” to ignore other neighboring jurisdictions or opportunities, Meyer said.

“I appreciate Mr. Meyer sharing the town of Milton’s change of plans in going in another/additional direction than what the fire commission had voted on,” city of Milton Mayor Anissa Welch said in an email to The Gazette.

Welch said it was apparent at the last fire commission meeting that town representatives “were hesitant to fully commit flat out, 100% to consolidating with Janesville and did not want to fund an ambulance. It is good that they have firmly decided to consolidate with someone.”

The city of Milton, with its expansion in residential, commercial and industrial areas, needs full-time professional fire and paramedic services, Welch said.

“The elected officials and staff at the city of Milton will continue with our commitment to provide fire and paramedic services that meet our needs regardless of the direction the town of Milton decides to take,” Welch said. “We respect the years we have had an intergovernmental agreement with them. We are two separate entities, and that has posed challenges and frustrations that are to be expected with a growing city and a township.

“Ultimately, both the town of Milton and the city of Milton will do what serves their residents the best.”

“All I know is,we remain committed to doing what we agreed to do. We will continue negotiations with the city of Janesville in good faith and hope to reach an agreement that benefits all,” Hulick said.

Rhodes said he is still processing the news, adding, “I hope that we can still work together to provide a premium service to the citizens of the town of Milton and the city of Milton itself.”

Jon Jennings, chairman of the commission that oversees the Milton Fire Department and also a town board member, said it would help the town to have an option that could be compared to the Janesville proposal.

Jennings said the intent is to ensure the communities now being served have the best services available, and “we can’t do that if we have only one option to go with. Consolidation is a very big deal. So we need to do it right the first time.”

One concern is that there will be no coverage gaps for the portions of the towns of Lima, Koshkonong, Johnstown and Harmony that the Milton department now serves, Jennings said.

He noted that the current system is “not adequate” because full-time firefighters are not ready to roll every time a call comes in.

“We owe it to the people to make the service the best it can be at the most affordable cost, and whatever negotiations take place, whether it’s Janesville or Edgerton, that’s the goal,” Jennings said.

The Gazette obtained a copy of a draft agreement between the town and city of Milton and city of Janesville that would consolidate all fire protection and EMS services with the Janesville Fire Department.

Officials said they are still negotiating, so the draft could be changed before it’s signed.

Here are some key provisions: 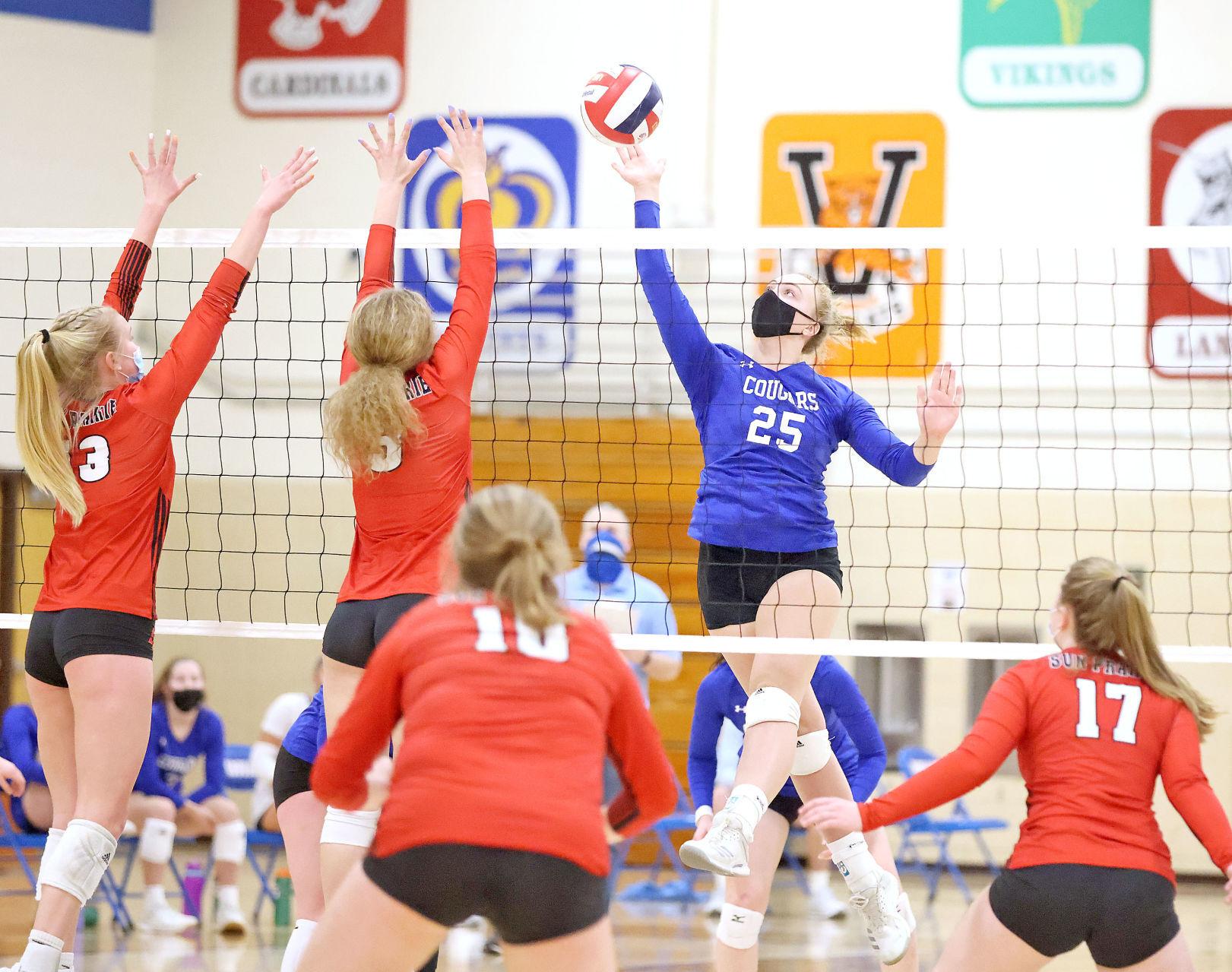 Janesville Craig’s Taia Hodgkinson hits the ball over the net during their home match against Sun Prairie on Tuesday.

Some tenants at the Best of Janesville Vintage Mall are moving out of their vendor spaces based on the mall owner’s handling of a display of items that customers and tenants said were racist. The display was at the mall’s sister location, Best of Beloit Vintage Mall in South Beloit, Illinois.

Local artisan Paquita Purnell was packing up a minivan Tuesday with the last of her wares after she pulled out of her vendor space at Best of Janesville Vintage Mall.

Purnell and several other tenants say they’re removing their booths from the south-side vintage mall after a vendor at the mall’s sister site in South Beloit, Illinois, displayed a Confederate flag with Ku Klux Klan symbols written on it and two artworks showing racist caricatures of Black people.

The incident happened Saturday during the busy Vintage Shop Hop. It has drawn fire on social media from tenants and customers who say mall owner James Flister took too few steps to publicly apologize for the vendor’s displays, which customers and vendors say are racist.

Tenants also claim Flister threatened to evict at least one of his mall tenants after the person spoke out against the displays.

On Saturday, vendors at the Best of Beloit Vintage Mall in South Beloit said they spotted a booth that displayed two paper fans depicting caricatures of Black people with distorted facial features and unrealistically dark skin.

Another piece on display was a miniature folk-art sculpture depicting a gleeful white boy perched on the back of a Black child crouched on his hands and knees.

Both children are set against a stylized brick wall. The white child is writing the words “Welcome to Dixie” on the wall while clutching what appears to be a white rope with one end tied around the Black child’s neck.

Flister told The Gazette on Tuesday that the mall removed the flag and caricature art soon after vendors and customers saw them.

Purnell, who is Black, said about two months earlier, a vendor in Flister’s South Beloit mall had displayed a 1940s tea towel printed with caricatures of Black children.

She characterized the art as a Jim Crow-era depiction of “Pickaninny” children.

“They never removed that towel even after it was reported to them,” she said. “They left it there for days, weeks. It stayed right there until it finally sold.”

Purnell said she has worked the cash register at Flister’s vintage malls, and she also has helped him attract some of the more than 200 tenants that lease space in his two vintage malls.

“It’s 2021 now. We’re not in 1940s America anymore,” Purnell said. “I told them how inappropriate it was, and nothing was done. After that, I said, ‘My contract is up in four months, and after that I’m leaving.’”

Flister posted on his malls’ Facebook pages that his managers had learned about items a customer “felt” were “racist/inappropriate” at the South Beloit store.

“We wanted to let you know that not only do we not condone inappropriate items; but if and when we find them, we take them out. These items were taken out immediately,” Flister wrote in the post.

But Purnell and another vendor, Crystal Perez, say Flister downplayed the situation in text messages and Facebook comments.

Perez said Flister threatened to evict her from her vendor space at the Janesville mall, 3138 S. Highway 51, and ultimately did so after Perez publicly aired information about the racist items.

Perez, a Janesville native now living in Clinton, sells country and farmhouse-inspired decor. She said she took Flister to task for not meeting the controversy head on, and she thinks Flister should have made a public apology with a full explanation of what happened. But she said he did not disclose details and instead used quotations around the words “racist” and “inappropriate” in his social media post.

Perez said that seemed flippant to her.

“In this day and age, it’s just not acceptable, and especially not with the movements we’ve ... recently had going on, Black Lives Matter, the George Floyd issue,” Perez said. “This is absolutely unacceptable, and it’s becoming more aware to society that it’s just unacceptable.”

Perez said she and other vendors got calls from customers all weekend who said they plan to steer clear of both vintage malls.

“People felt there was completely zero concern for what hurt them—those things put on display that they and a lot of people had seen,” she said.

Perez left the Best of Janesville Vintage Mall after Flister sent her this Facebook message, which was obtained by The Gazette:

“I really love you guys and would love to not kick you out,” but “on each team there is a head coach. I am the head coach. If you are not on board with what is going on, it may be better to part ways than to disrupt the locker room. I will leave that up to you at this point.”

In a phone interview, Flister said he thinks his malls and vendors have a good reputation, and he called the one vendor’s items an “isolated incident.”

He said it can be difficult and “impractical” for the malls to screen all of the vendor spaces for potentially objectionable items.

He declined to comment on text messages in which he appeared to threaten to remove tenants who continued speaking out and pressing him for further public apologies.

He called the texts “internal” communications.

In other text messages to tenants, Flister seemed to boil down the incident to a matter of political correctness or self-censorship on a “spectrum” of personal opinion.

In texts between Flister and another tenant obtained by The Gazette, Flister said the unfolding controversy over the Black caricature items and the Klan-themed Confederate flag reminded him of recent public sentiment over perceived racist themes in some Dr. Seuss books.

“It is definitely a spectrum,” Flister wrote. “When we see something inappropriate, we take it out—unfortunately the definition of ‘offensive’ is so all over the board—Example: Dr. Seuss and Washington Redskins recently.”

In the same exchange, Flister characterized the situation as “silly” and wrote, “It will all blow over, I’m sure.”

Obituaries and death notices for March 10, 2021