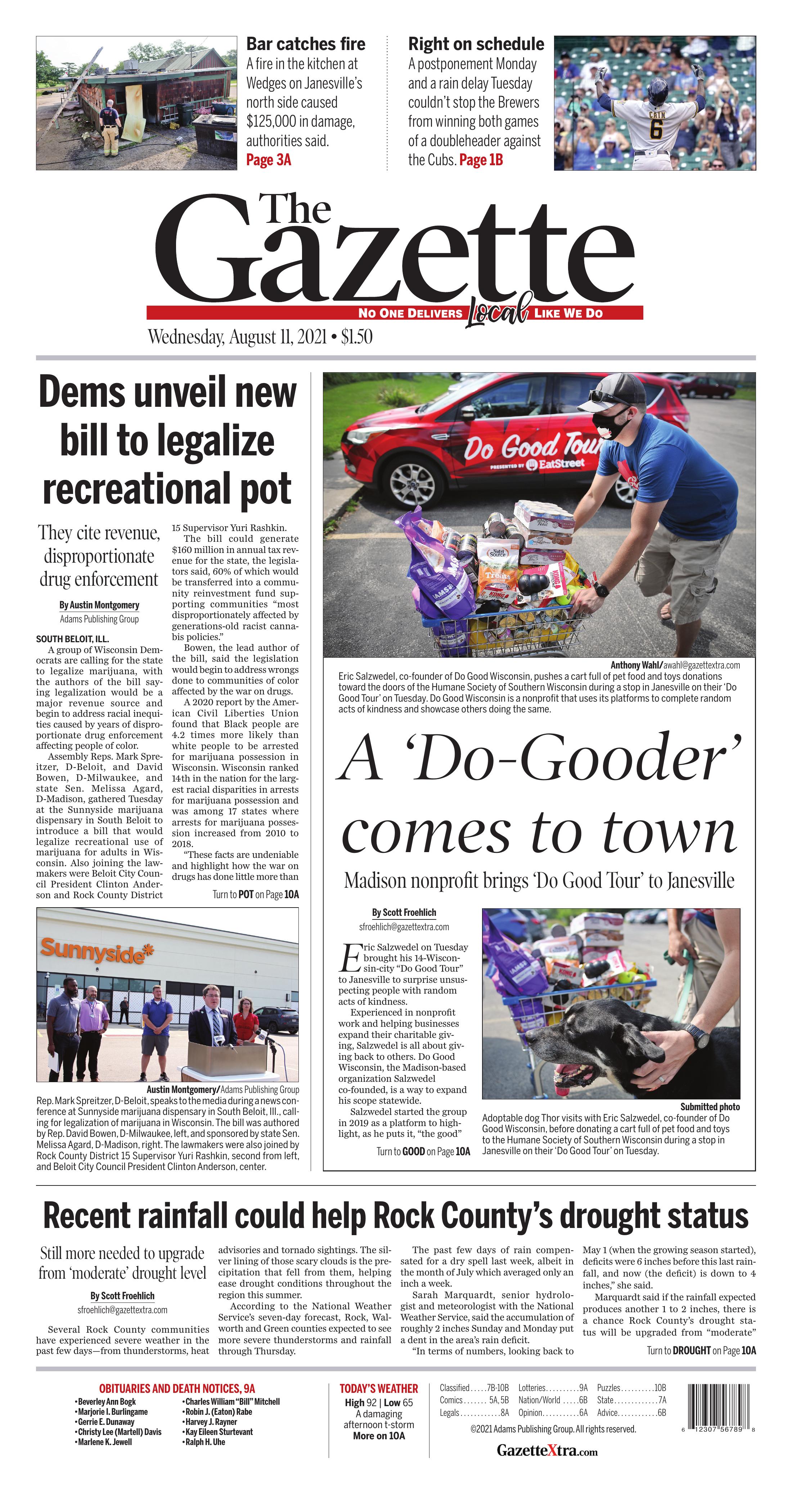 Eric Salzwedel, co-founder of Do Good Wisconsin, pushes a cart full of pet food and toys donations toward the doors of the Humane Society of Southern Wisconsin during a stop in Janesville on their ‘Do Good Tour’ on Tuesday. Do Good Wisconsin is a nonprofit that uses its platforms to complete random acts of kindness and showcase others doing the same.

Eric Salzwedel on Tuesday brought his 14-Wisconsin-city “Do Good Tour” to Janesville to surprise unsuspecting people with random acts of kindness.

Experienced in nonprofit work and helping businesses expand their charitable giving, Salzwedel is all about giving back to others. Do Good Wisconsin, the Madison-based organization Salzwedel co-founded, is a way to expand his scope statewide.

Salzwedel started the group in 2019 as a platform to highlight, as he puts it, “the good” that everyday ordinary people, businesses and organizations are doing across Wisconsin.

As he built a following, Salzwedel started organizing events and drives to give back to those in need—or just those he wanted to see smile. Recently, Do Good Wisconsin distributed 300 boxes of school supplies to teachers across the state. 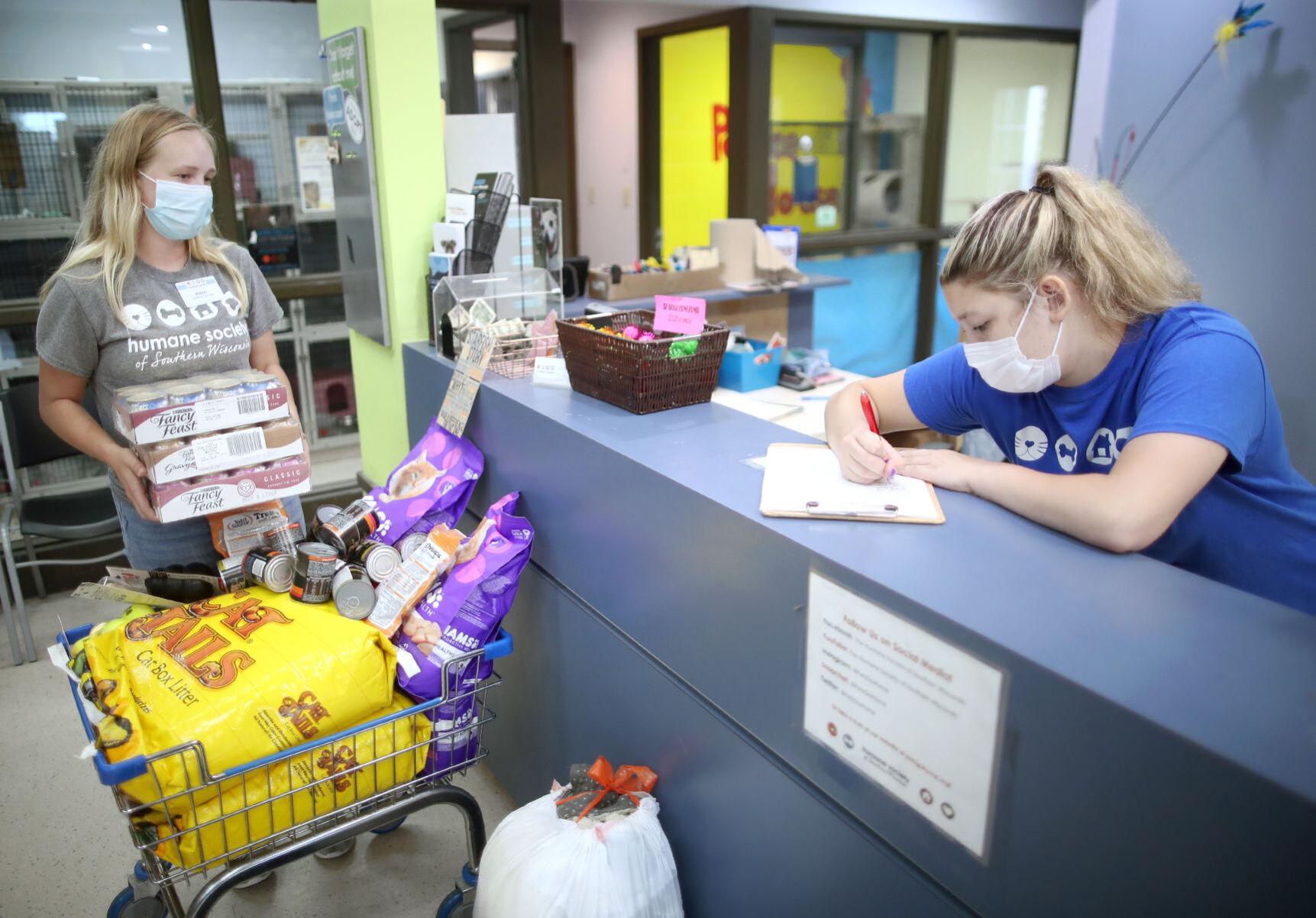 Humane Society of Southern Wisconsin employees Alison Strieker, left, and Reghan Linneman create a list of the donated items they received from Do Good Wisconsin during a stop in Janesville on their ‘Do Good Tour’ on Tuesday.

During his time in Janesville on Tuesday, Salzwedel and his videographer made several stops. At a local Kwik Trip, he paid for the gas some customers pumped. He also gave a generous tip to a member of the wait staff at Sneakers Sports Bar and Grill.

Salzwedel said he seeks to have an impact on everyone with whom he comes in contact.

While at Sneakers, he bought several patrons side orders of cheese curds and gave them tickets to Milwaukee Brewers games.

“You can’t get more Wisconsin than that,” Salzwedel said.

Do Good Wisconsin has received donations of money and merchandise from organizations such as the Brewers and the Bucks. EatStreet, a Wisconsin-based food delivery service, donated $25,000 to the Do Good Tour.

One of Salzwedel’s last stops in Janesville was at the Humane Society of Southern Wisconsin—after spending $300 at the local Mounds Pet Food store. He rolled a cart full of pet food and chew toys into the animal shelter, making the day of every person and animal in the building. 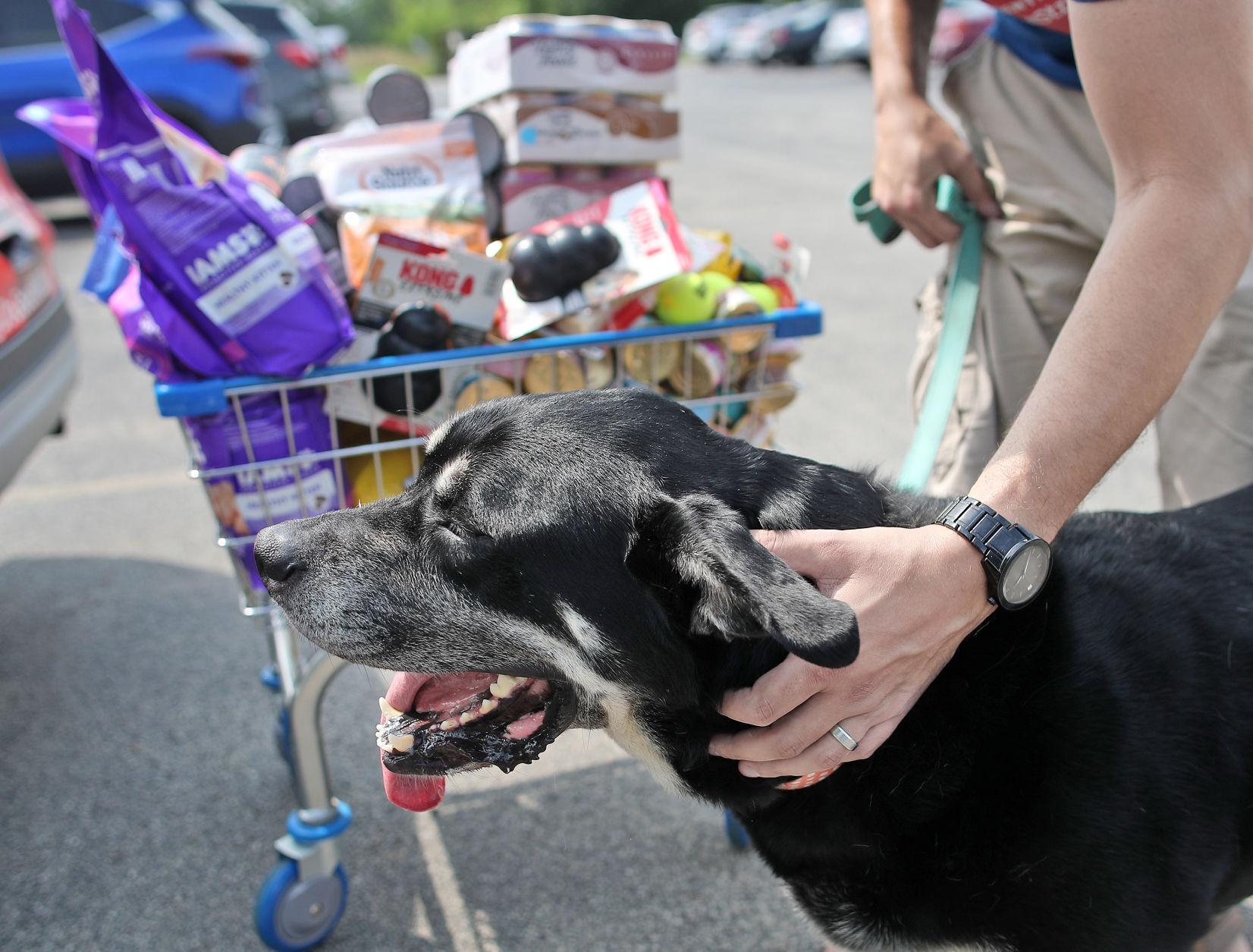 Adoptable dog Thor visits with Eric Salzwedel, co-founder of Do Good Wisconsin, before donating a cart full of pet food and toys to the Humane Society of Southern Wisconsin during a stop in Janesville on their ‘Do Good Tour’ on Tuesday. Do Good Wisconsin is a nonprofit that uses its platforms to complete random acts of kindness and showcase others doing the same.

Hannah Hathaway, marketing coordinator at the shelter, said the donation couldn’t have come at a better time.

August is known as “kitten season” for the staff, she said. “I saw a lot of wet kitten food being donated and that’s really helpful.”

Hathaway added, “We have over 82 animals in foster care and all of those animals need to eat.”

This level of appreciation is at the heart of what Salzwedel and his organization strive to elicit.

“There’s no better feeling than to give to others in need,” he said. “When a simple act of kindness is done, it goes a long way.” 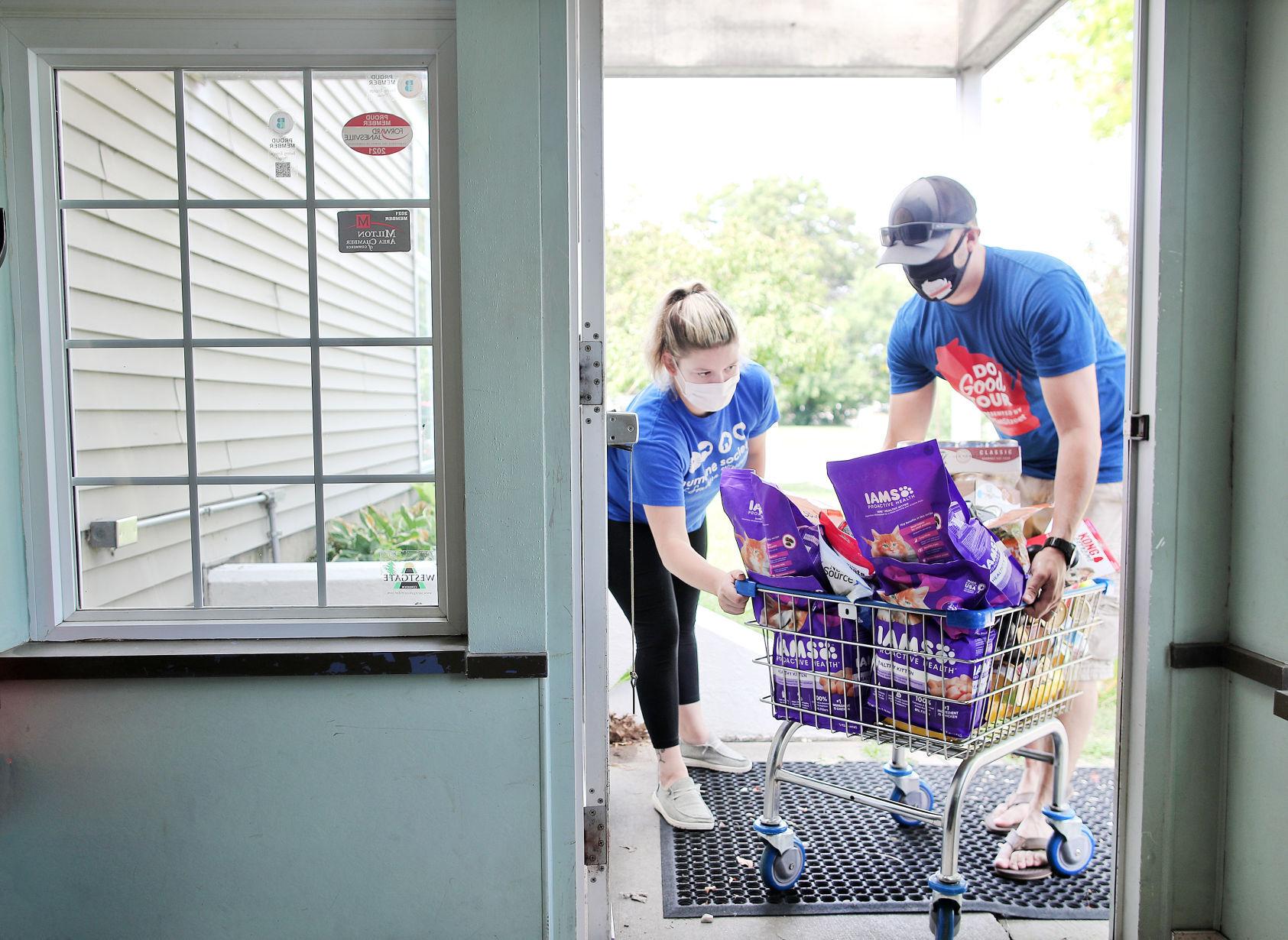 Eric Salzwedel, co-founder of Do Good Wisconsin, gets a little help from Reghan Linneman as he pushes a cart full of donations into the Humane Society of Southern Wisconsin during a stop in Janesville on their ‘Do Good Tour’ on Tuesday. Do Good Wisconsin is a nonprofit that uses its platforms to complete random acts of kindness and showcase others doing the same.

Hathaway said Do Good Wisconsin reflects a spirit of giving she often encounters.

The goal of Salzwedel and Do Good Wisconsin is to inspire others to commit random acts of kindness.

“I hope more people find ways to give back,” he said. “When more people do good, that makes the community a lot better, too.”

Find out more about Do Good Wisconsin at @DoGoodWiTour on Instagram and on the organization’s Facebook page. 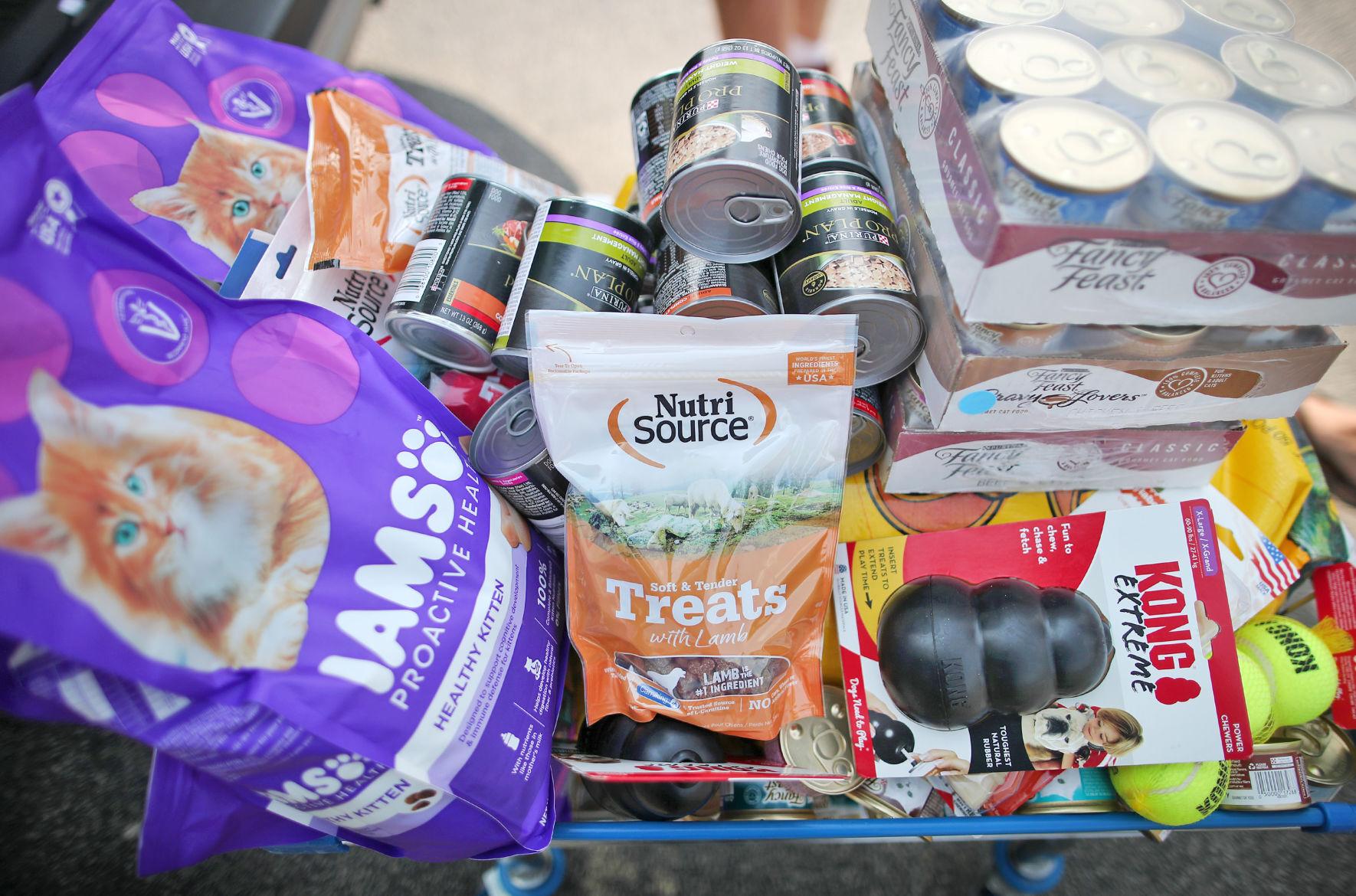 A cart full of pet food and toy donations from Do Good Wisconsin to the Humane Society of Southern Wisconsin.

A field of corn west of Janesville along Highway 11 on Thursday.

Several Rock County communities have experienced severe weather in the past few days—from thunderstorms, heat advisories and tornado sightings. The silver lining of those scary clouds is the precipitation that fell from them, helping ease drought conditions throughout the region this summer.

According to the National Weather Service’s seven-day forecast, Rock, Walworth and Green counties expected to see more severe thunderstorms and rainfall through Thursday.

The past few days of rain compensated for a dry spell last week, albeit in the month of July which averaged only an inch a week.

Sarah Marquardt, senior hydrologist and meteorologist with the National Weather Service, said the accumulation of roughly 2 inches Sunday and Monday, Aug. 8 and 9, put a dent in the area’s rain deficit.

“In terms of numbers, looking back to May 1 (when the growing season started), deficits were 6 inches before this last rainfall, and now (the deficit) is down to 4 inches,” she said.

Marquardt said if the rainfall expected produces another 1 to 2 inches, there is a chance Rock County’s drought status will be upgraded from “moderate” to “abnormally dry.” This would be an indication that crop yields—and market prices for those crops—could recover.

The window for significant rain is short, however, as the forecast through Thursday calls for only a 20 to 30% chance of thunderstorms. The rest of the week looks to deliver more pleasant weather.

Heading into late August and September, rainfall typically tapers off. According to data kept by the NWS, average precipitation is 4.3 inches in August and 3.7 inches in September.

“It’s the time of year when the normal precipitation starts to trend down and it continues down through the year and into winter,” Marquardt said.

Since June 1, much of Rock County has seen its drought status improve from severe to moderate, so a continuation of this trend would bring a much-welcomed drop to the abnormally dry designation.

“The next two days, that’s our chance (for rain) to continue to help improve things,” Marquardt said. 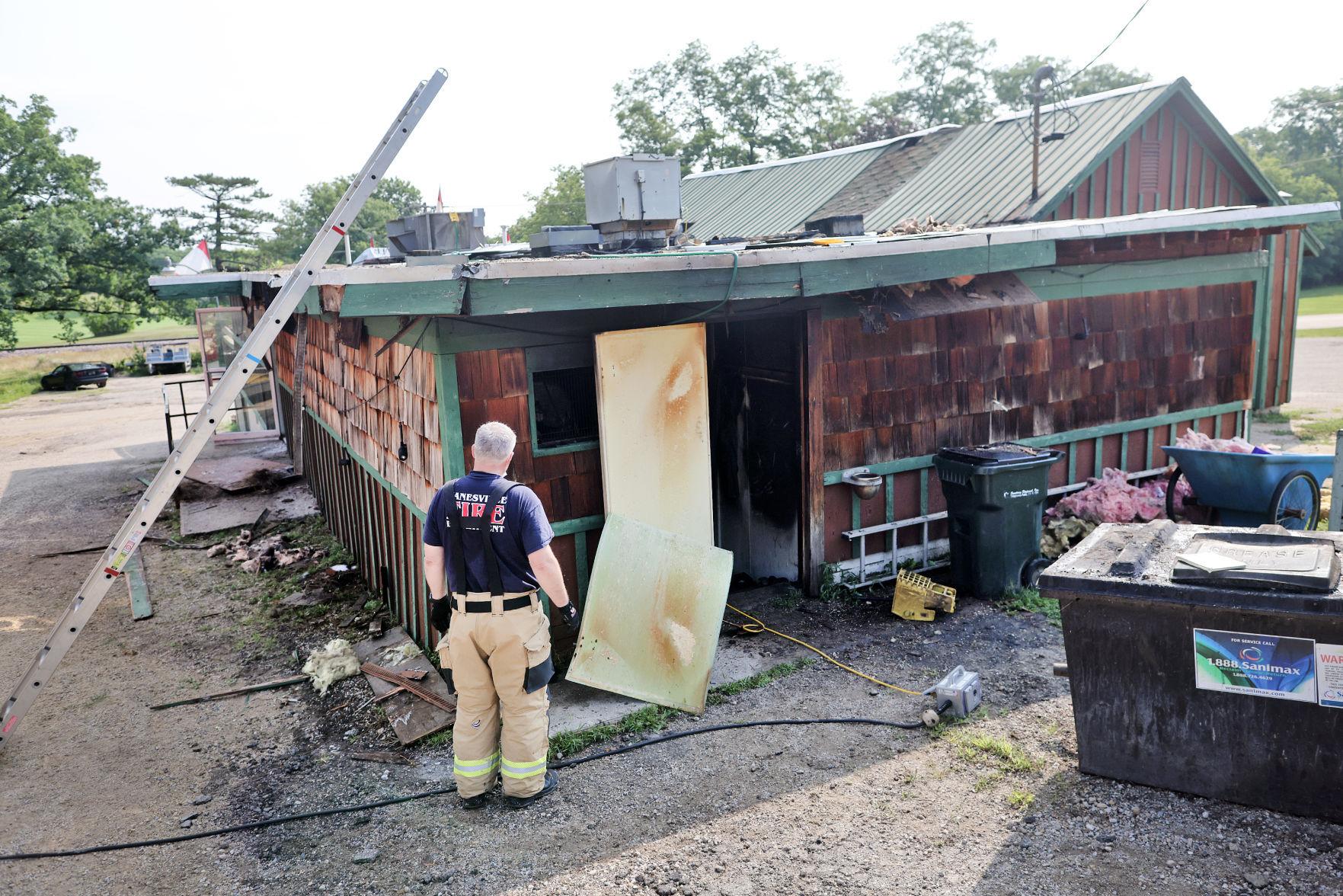 Firefighters continued their investigation into a fire inside of Wedges, a tavern on Janesville’s northwest side early Tuesday morning. The fire started in the kitchen and there’s an estimated $125,000 in damage to the building and contents.

A group of Wisconsin Democrats are calling for the state to legalize marijuana, with the authors of the bill saying legalization would be a major revenue source and begin to address racial inequities caused by years of disproportionate drug enforcement affecting people of color.

The bill could generate $160 million in annual tax revenue for the state, the legislators said, 60% of which would be transferred into a community reinvestment fund supporting communities “most disproportionately affected by generations-old racist cannabis policies.”

Bowen, the lead author of the bill, said the legislation would begin to address wrongs done to communities of color affected by the war on drugs.

“These facts are undeniable and highlight how the war on drugs has done little more than widen the unconscionable disparities ripping families apart that turn our neighbors into criminals with a record,” Bowen said.

Across the nation, law enforcement made more than 6.1 million marijuana-related arrests from 2010 to 2018. Overall national arrest rates have trended downward, but in Wisconsin, marijuana possession arrests have actually increased 12.1% from 2010 to 2018, the report states.

Spreitzer, who serves as the Democratic caucus chairperson, said the issue was long overdue for action in Madison.

“However you feel about cannabis use, keeping it illegal isn’t helping anything. It’s only hurting. The people of Wisconsin are ready for legalization,” Spreitzer said.

Agard said there has been “a paradigm shift” in Americans’ attitude toward marijuana.

“It’s safe to say the landscape has changed and support has grown and continues to grow,” she said, referencing the 14 states that have legalized recreational marijuana use. In total, 34 states have taken some varying form of action to legalize marijuana use.

Illinois legalized recreational marijuana use for adults in 2019 with the first sales taking place last year. All lawmakers referenced the record revenues being brought into Illinois, with the trio noting Wisconsin was losing out on a major tax revenue windfall to neighboring Illinois and Michigan.

“Legalization would be the economic boost our state so desperately needs without one penny of tax dollars going to the industry,” Agard said.

Locally, Rock County voters spoke resoundingly in November 2018 when a nonbinding advisory referendum gauging support for legalizing marijuana for adult use passed with nearly 70% of the vote. The resolution was championed by Rashkin, who called Tuesday’s announcement regarding legalization “common sense.”

“We can’t do this alone,” Rashkin said. “We need help from the state, and this is where it’s so important that this change is made on the state level. We can’t do this as an initiative. We need this done in Madison.”

In Beloit, Anderson said constituents have approached him multiple times since his election in 2017 regarding marijuana legalization.

“Ask any elected official, they see dollar signs leaving our community,” Anderson added. “Those dollars can trickle down to our community. The city of Beloit and the state of Wisconsin are missing out on a great opportunity, and I hope we can finally see some action in Madison.”

But it’s unclear if the legislative effort, first broached in 2013 by Agard, will pass the GOP-controlled Legislature as top Republicans in Madison remain unwilling to support legalization outright. Agard said the bill would circulate seeking co-sponsors for the next two weeks before moving forward.