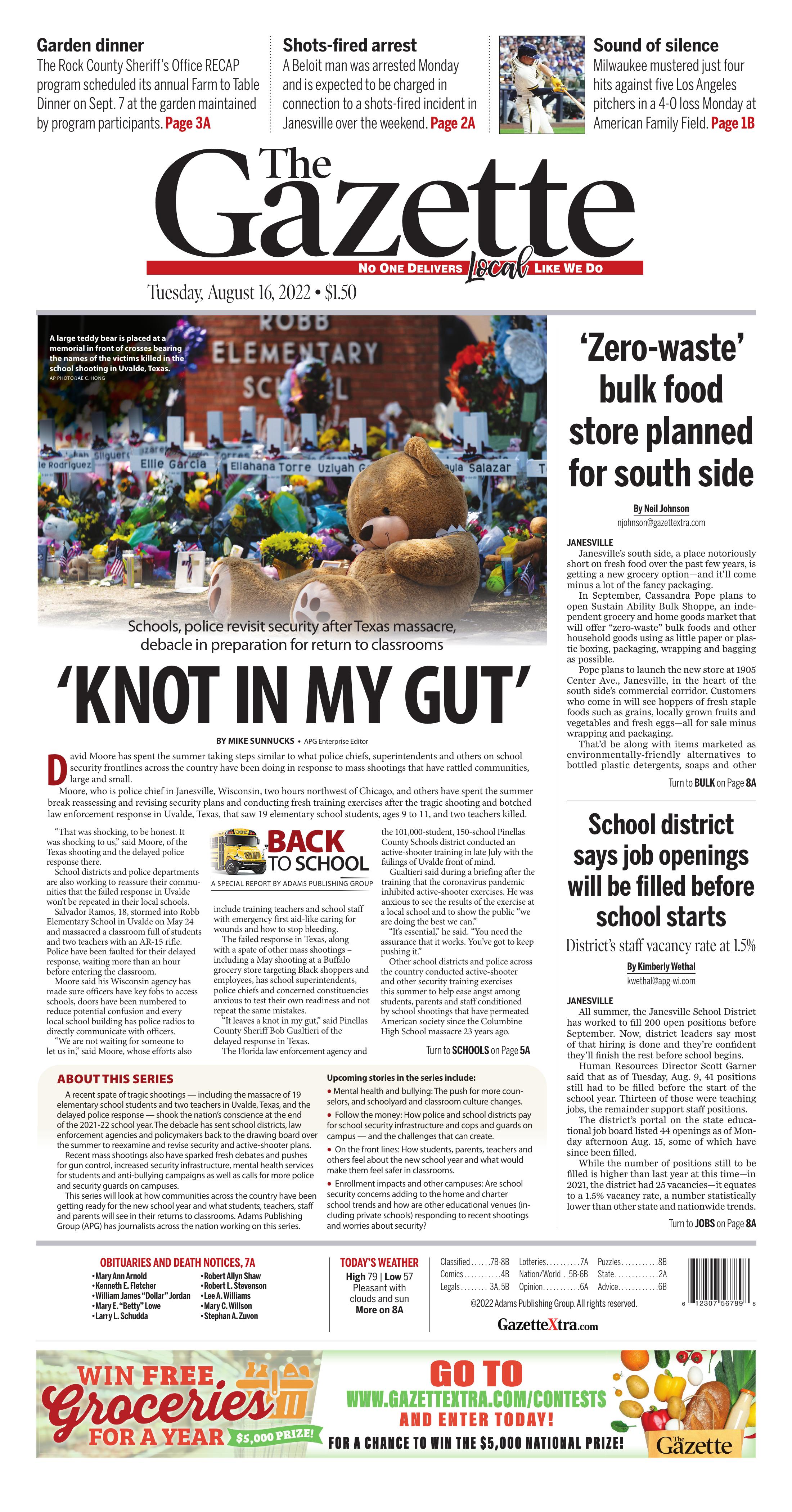 The sign for Sustain Ability Bulk Shoppe, a new grocery store coming to Janesville’s south side in September. The store at 1905 Center Ave. will offer ‘zero waste,’ unpackaged foods and home goods in bulk, and minus the standard, paper or plastic grocery store bags.

Janesville’s south side, a place notoriously short on fresh food over the past few years, is getting a new grocery option—and it’ll come minus a lot of the fancy packaging.

Pope plans to launch the new store at 1905 Center Ave., Janesville, in the heart of the south side’s commercial corridor. Customers who come in will see hoppers of fresh staple foods such as grains, locally grown fruits and vegetables and fresh eggs—all for sale minus wrapping and packaging.

That’d be along with items marketed as environmentally-friendly alternatives to bottled plastic detergents, soaps and other household items.

Just don’t ask for a plastic grocery bag to carry any of it out.

As far as Pope is concerned, the only plastic packaging she wants to see come in or out of the store is reusable, snap-lid containers in which customers would box up things like dry rice, beans, or flour.

Pope, a former early childhood education teacher and manager, decided a little over a year ago that she wanted to embrace “eco-minimalism,” a consumer movement intended to move away from retail packaging that’s later discarded.

Pope found that there were few local stores, especially on the south side, that offered minimally packaged items in bulk. She also identified an on-again, off again void of fresh food and staples on the south side since a few years before the COVID-19 pandemic, ever since the Center Avenue Pick n’ Save closed.

“There just wasn’t anything, no stores that had the values I was looking for. So I just decided to make one. I wanted I wanted a store that I could shop in, a store that, as selfish as it sounds, is for me. And I started realizing that there was a lot more people out there like me, who were looking for this kind of store,” Pope said.

When her south side store opens, Pope will offer mainly vegetarian foodstuffs, plus fresh eggs, locally made honey and maple syrup—and even kombucha, a naturally fermented tea, on tap— along with home goods.

Most of the items will come into the store in packaging that’s “compostable,” and customers will be able to buy food by weight.

“Think ‘old school,’ hundreds of years ago, if you walked into a general store, you’d get everything you need from your store, but it’s not all wrapped up in a bunch of packaging. That’s what we’re trying to be. We’re focusing on the everyday essential things that you need, the bare minimum that you need to run your life with the bare minimum of packaging,” Pope said.

Customers who shop at Sustain Ability will be able to get their own reusable glass and plastic keeper containers filled by store employees with whatever food items they want in whatever amount they’d like, Pope said.

The store, which has a sign that features an image of a canvas tote, also will offer donated keeper bags for people to use to carry their goods home.

Sustain Ability would be one of a few niche new grocers that are seeking to tap a retail market on the south side that’s been relatively devoid of fresh food.

The idea is to appeal to both people who seek fresh food minus wasteful packaging, and south side residents who need household staples but don’t want to make a half-hour round trip across town to Janesville’s supermarket-thick northeast side.

Pope said her store’s model of non-packaged staple foods is aimed at keeping prices competitive. She said she doesn’t intend to run sales on items aimed at getting people to splurge and overbuy unnecessary groceries.

“It’s not about selling you a 50-pound bulk bag of rice,” Pope said. “The idea we’re after, actually, is to eliminate waste. That includes eliminating food waste.”

All summer, the Janesville School District has worked to fill 200 open positions before September. Now, district leaders say most of that hiring is done and they’re confident they’ll finish the rest before school begins.

Human Resources Director Scott Garner said that as of Tuesday, Aug. 9, 41 positions still had to be filled before the start of the school year. Thirteen of those were teaching jobs, the remainder support staff positions.

The district’s portal on the state educational job board listed 44 openings as of Monday afternoon Aug. 15, some of which have since been filled.

While the number of positions still to be filled is higher than last year at this time—in 2021, the district had 25 vacancies—it equates to a 1.5% vacancy rate, a number statistically lower than other state and nationwide trends.

Garner told Janesville School Board members during their Aug. 9 meeting that while he had been concerned a few months ago that the district would see a “drought” of candidates for its open positions, he instead found himself pleasantly surprised.

“Frankly, if you look across the region, we’re in fairly decent shape,” he said. “I can assure you that we will make this work before the start of our school year—our students will have teachers in front of them.”

One of the district’s largest vacancy categories as of Monday, Aug. 15, was long-term substitute teachers. The district needs six long-term subs, according to job postings on the portal site. The other vacancies encapsulate a variety of roles, including four alternative education teachers, two Parker High School math teachers and two at-risk teachers at Craig High School.

The district went on a hiring blitz in late spring with 40 certified staffers hired and approved June 14. The pace of hiring slowed in July and so far in August, with 17 and 18 teachers hired, respectively.

Of the 75 employees hired as of Aug. 9, 39 are new teachers with no prior experience, and 26 have degrees from UW-Whitewater. Nearly all of the district’s student teachers in the last three years came from UW-Whitewater, Garner said.

To boost its hiring, the district has started a teacher referral program similar to the one it has for substitutes, Garner said. It has also started partnerships with universities and offered scholarships for staff who are looking to become licensed.

“We’re being creative to get people here so we can fill vacancies,” he said.

The district’s hiring woes can be reflected elsewhere in the state, and they are worse in some districts.

In Beloit, there were 89 open teacher positions as of early August, and district administration is looking to increase its substitute teacher pool there to help fill vacancies. Waukesha, a school district slightly larger than Janesville, saw 83 of its teaching staff leave the district as of mid-June; and the Madison Metropolitan School District was short 141 teachers, or 6.6% of its staff, the Wisconsin State Journal reported Aug. 9.

Nationally, it’s estimated there may be nearly 570,000 fewer educators in public schools than there were prior to the COVID-19 pandemic, a February 2022 report from the National Education Association said. The ratio for hiring stands at 0.57 people per job, the report stated, as teachers reported high rates of burnout from pandemic stress and due to schools being short staffed.