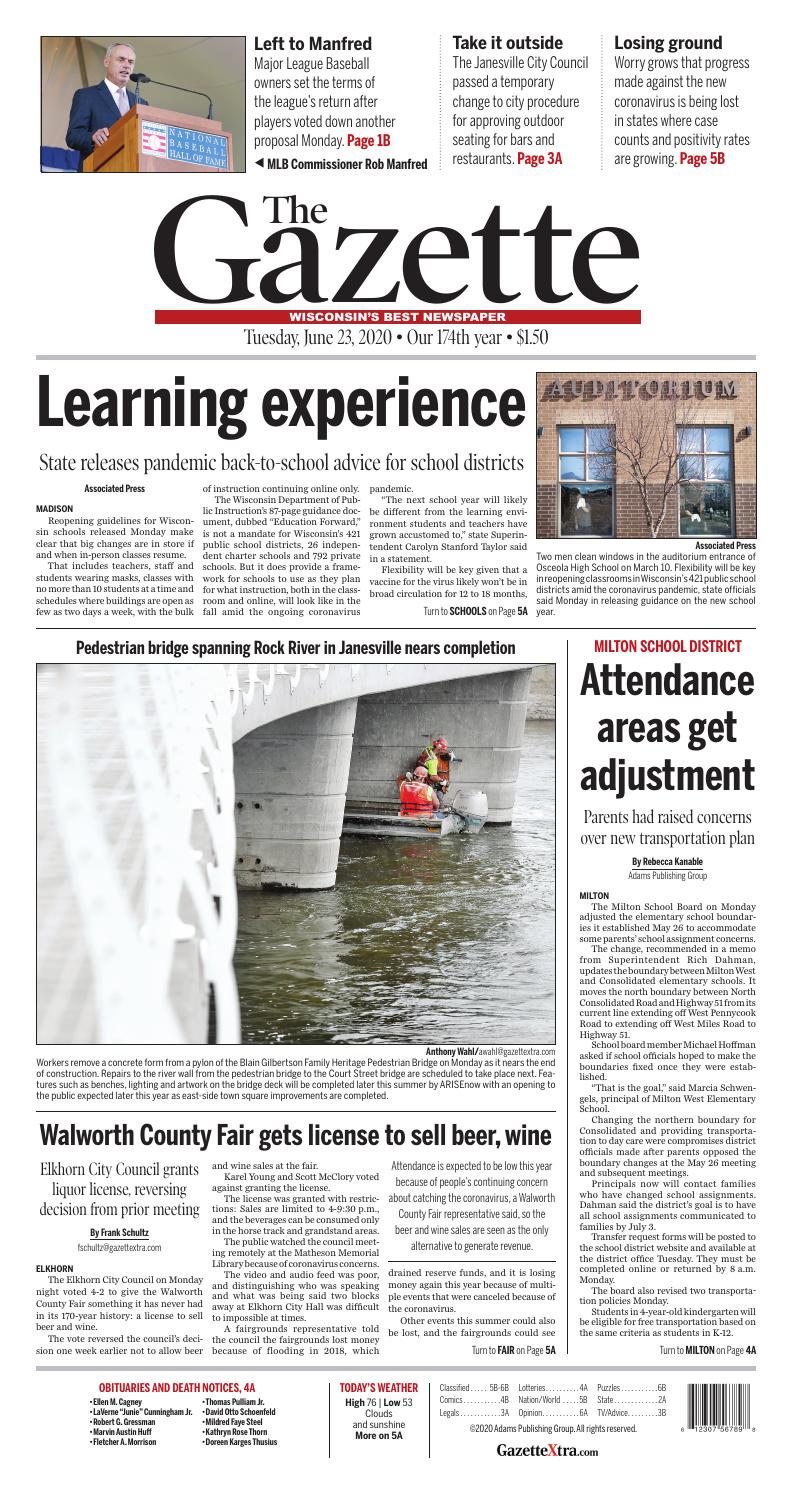 Osceola High School in Osceola is closed for cleaning March 10 after someone testing positive for the coronavirus attended a function at the school. Flexibility will be key in reopening classrooms in Wisconsin's 421 public school districts amid the coronavirus pandemic, state officials said Monday in releasing guidance on the new school year.

Two men clean windows in the auditorium entrance of Osceola High School on March 10. Flexibility will be key in reopening classrooms in Wisconsin’s 421 public school districts amid the coronavirus pandemic, state officials said Monday in releasing guidance on the new school year.

Reopening guidelines for Wisconsin schools released Monday make clear that big changes are in store if and when in-person classes resume.

That includes teachers, staff and students wearing masks, classes with no more than 10 students at a time and schedules where buildings are open as few as two days a week, with the bulk of instruction continuing online only.

The Wisconsin Department of Public Instruction’s 87-page guidance document, dubbed “Education Forward,” is not a mandate for Wisconsin’s 421 public school districts, 26 independent charter schools and 792 private schools. But it does provide a framework for schools to use as they plan for what instruction, both in the classroom and online, will look like in the fall amid the ongoing coronavirus pandemic.

“The next school year will likely be different from the learning environment students and teachers have grown accustomed to,” state Superintendent Carolyn Stanford Taylor said in a statement.

Flexibility will be key given that a vaccine for the virus likely won’t be in broad circulation for 12 to 18 months, the recommendations said. The education department stressed that the guidance, the first comprehensive set of recommendations for reopening in the fall, will be ever-evolving as more is known.

The education department also cautions that another wave of infections could result in changes to operations and school closures. There might be a need for increased mental health support given the fear, loss and isolation that can occur, the guidance said, while noting that deaths from COVID-19 are possible—especially among children and adults in high-risk categories.

“COVID-19 remains highly contagious, and people in Wisconsin are still at risk,” DHS Secretary Andrea Palm said in a statement. “This guidance is designed to be used in consultation with local and tribal health departments, and we encourage school districts to work with them closely to make the best decisions for their communities.”

Schools should be ready for high absentee rates among teachers given the expectation that they stay home if they are not feeling well, the guidance warned. It called for reaching out to retired teachers to help fill gaps.

The guidelines show the “complexity and challenges school leaders face in trying to reopen schools safely this fall,” said Dan Rosmiller, spokesman for the Wisconsin Association of School Boards.

A statewide order to close schools that Palm issued expires June 30. Absent a local order preventing them from reopening after that, the decision on when and how to resume teaching will rest with each school district.

As of Monday, there have been more than 25,000 confirmed cases of COVID-19 in the state with 745 deaths, according to the state Department of Health Services. Of those who got the virus, 78% have recovered and 3% have died with the rest remaining active cases. The percentage of tests that came back positive of all tested Monday was 3.8%, down from 4.6% the day before.

The Elkhorn City Council on Monday night voted 4-2 to give the Walworth County Fair something it has never had in its 170-year history: a license to sell beer and wine.

The vote reversed the council’s decision one week earlier not to allow beer and wine sales at the fair.

Karel Young and Scott McClory voted against granting the license.

The license was granted with restrictions: Sales are limited to 4-9:30 p.m., and the beverages can be consumed only in the horse track and grandstand areas.

The public watched the council meeting remotely at the Matheson Memorial Library because of coronavirus concerns.

The video and audio feed was poor, and distinguishing who was speaking and what was being said two blocks away at Elkhorn City Hall was difficult to impossible at times.

A fairgrounds representative told the council the fairgrounds lost money because of flooding in 2018, which drained reserve funds, and it is losing money again this year because of multiple events that were canceled because of the coronavirus.

Other events this summer could also be lost, and the fairgrounds could see losses of $500,000 or more for the year, the representative said.

“It’s not that we want to sell the beer. We need to sell beer … to keep us from sinking deeper and deeper,” the representative said.

Attendance is expected to be low this year because of people’s continuing concern about catching the virus, the representative said, so the beer and wine sales are seen as the only alternative to generate revenue.

Sixteen people spoke at the meeting, five for and 11 against granting the license.

Gene Ingersoll, who said he has been to every fair for the past 70 years, was one of several area residents who said one of the fair’s attractions is that it’s dry.

If alcohol is served, “it will be the end of the fair,” Ingersoll said.

Others said selling alcohol sets a bad example for youth.

Matt Lois said people have brought their own alcohol to the fair in the past.

“There’s a lot more alcohol at that fair now than you actually perceive,” he said.

Kyle Adams, who exhibits at the Walworth County and state fairs, said he has always felt comfortable with people drinking at the Wisconsin State Fair.

Nancy Douglass of the Walworth County Fair Foundation and general manager of The Lake 96.1 FM radio station said the community needs the fair to be as big and successful as it can be.

“Businesses who participate need the exposure and income opportunity. We have a lot of lost income to make up for,” Douglass said. “The 55 or more charities, many of whom generate the bulk of their income (at the fair), need the opportunity to raise some funds, especially because they’re serving the needs of so many more people right now.

“For the surrounding businesses, the fair generates several million dollars in collateral income,” Douglass continued. “… If the fair is to continue as we know it this year, the revenue has to come from somewhere. … We need this fair to be successful, not just for the fair but for all of us.”

The Milton School Board on Monday adjusted the elementary school boundaries it established May 26 to accommodate some parents’ school assignment concerns.

School board member Michael Hoffman asked if school officials hoped to make the boundaries fixed once they were established.

“That is the goal,” said Marcia Schwengels, principal of Milton West Elementary School.

Changing the northern boundary for Consolidated and providing transportation to day care were compromises district officials made after parents opposed the boundary changes at the May 26 meeting and subsequent meetings.

Transfer request forms will be posted to the school district website and available at the district office Tuesday. They must be completed online or returned by 8 a.m. Monday, June 29.

Students in 4-year-old kindergarten will be eligible for free transportation based on the same criteria as students in K-12.

Last August, the school board approved making transportation free for all 4K students to ensure they did not have to cross Highway 59 to get to Small Wonders Learning Center.

In the 2020-21 school year, 4K classes will be offered at West, East and Harmony elementary schools, not at Small Wonders.

Consolidated and West are one attendance area for 4K because Consolidated does not offer 4K.

Students are eligible for busing if they live 2 or more miles from their assigned school, live in an unusually hazardous transportation area or if they are administratively assigned to a school outside their attendance area.

Transportation will be provided to:

“We are working on providing transportation outside of attendance areas to help support the need for transportation to and from day care. This will be part of the Buy a Seat program,” the memo states.

The cost for the Buy a Seat program (if room is available on an existing bus route) will increase to $200 per student, which represents about 30% of the cost. The family cap will be $400, and reduced rates will be available based on financial need.

The rates have not changed since 2011. 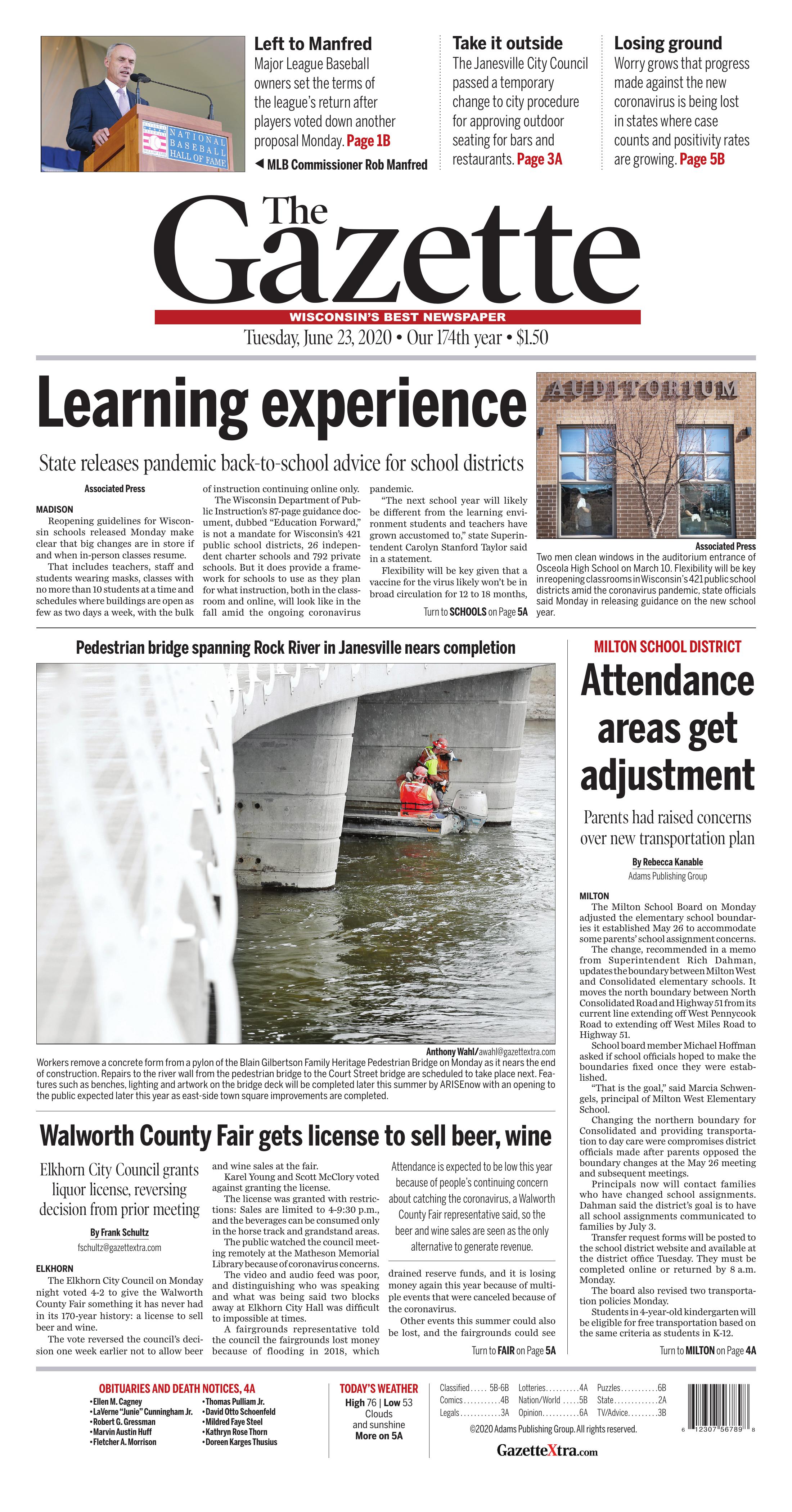