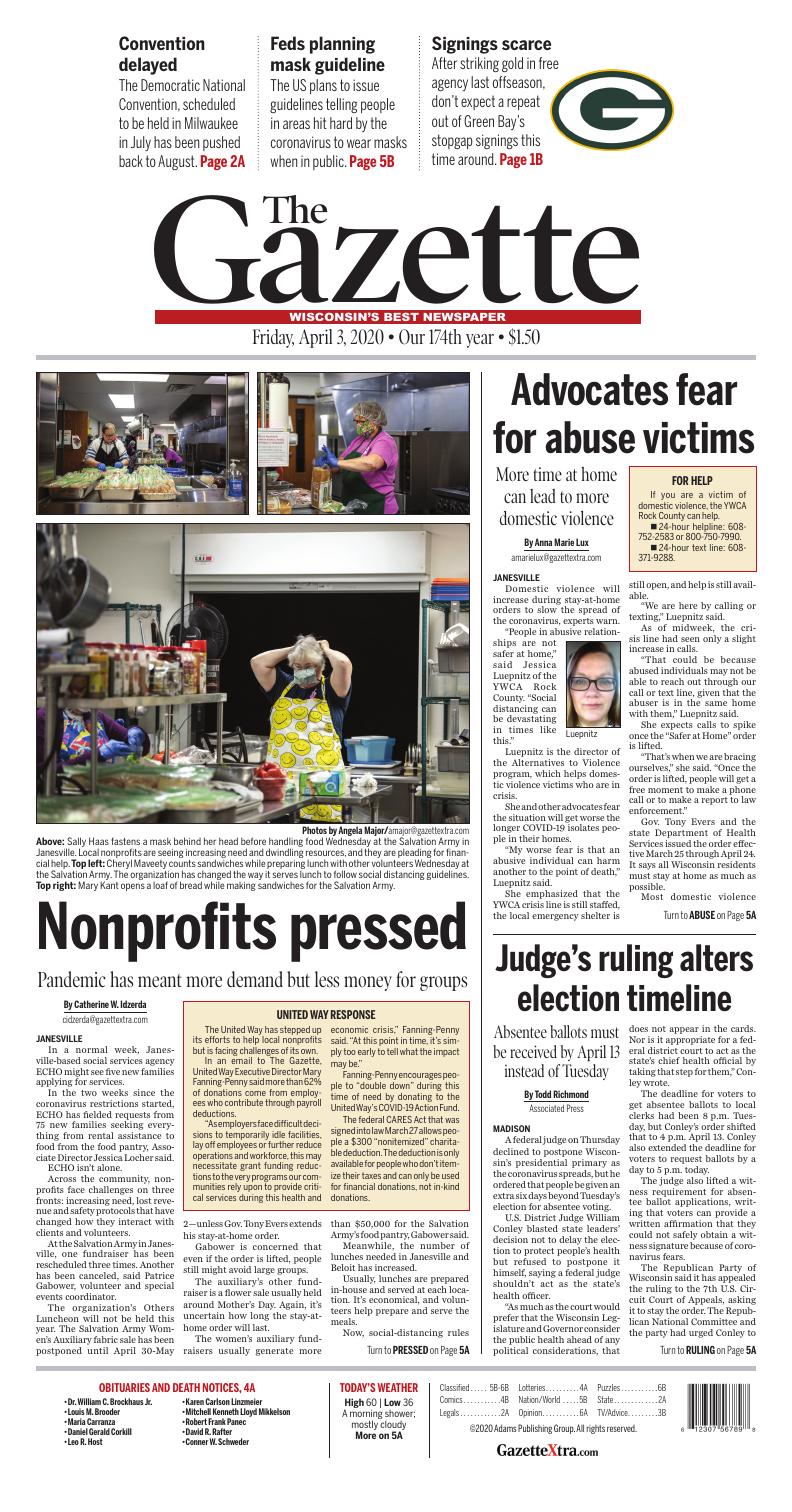 Mary Kant opens a loaf of bread while making sandwiches for the Salvation Army on Wednesday in Janesville.

In the two weeks since the coronavirus restrictions started, ECHO has fielded requests from 75 new families seeking everything from rental assistance to food from the food pantry, Associate Director Jessica Locher said.

Across the community, nonprofits face challenges on three fronts: increasing need, lost revenue and safety protocols that have changed how they interact with clients and volunteers. 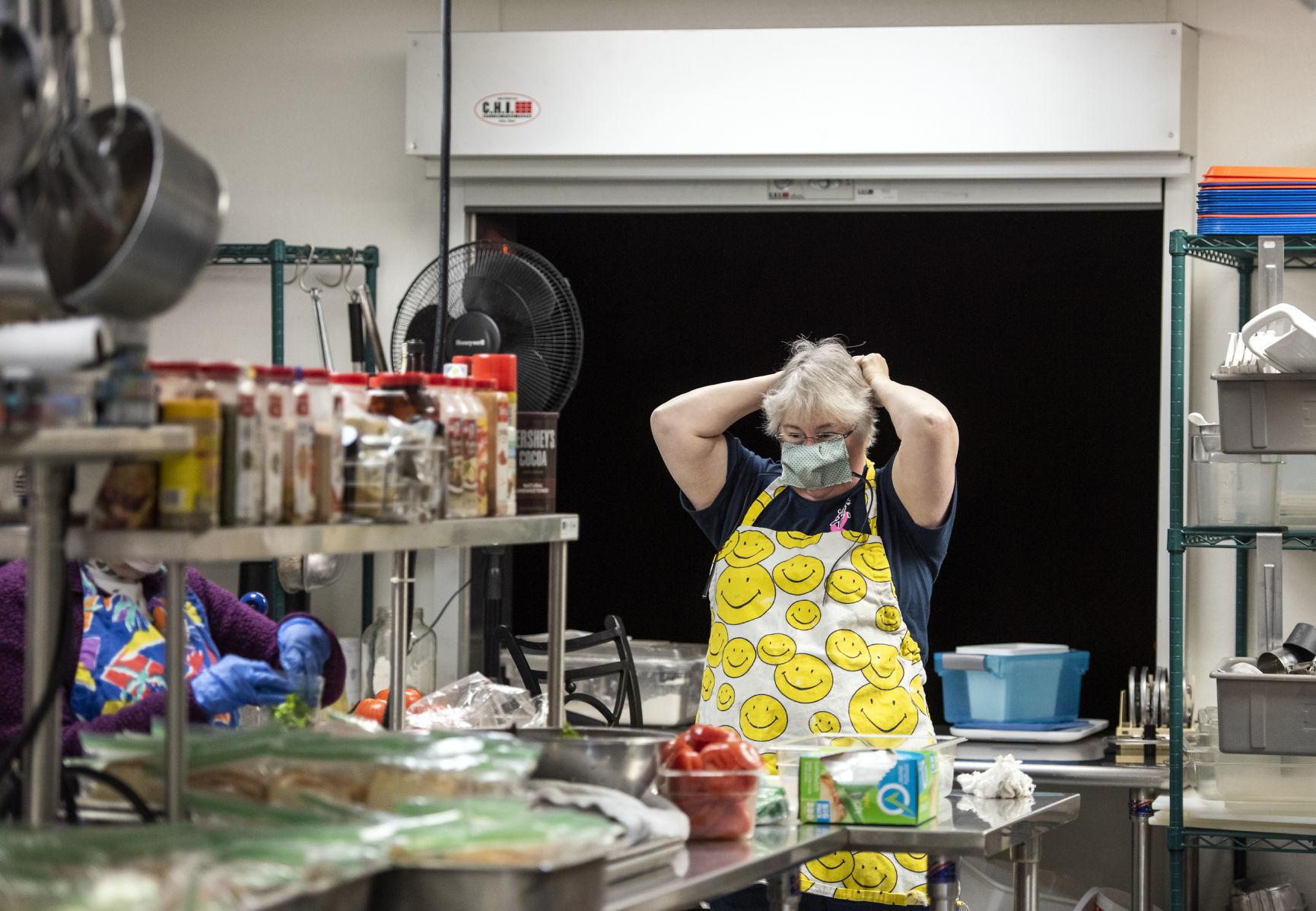 Sally Haas fastens a mask behind her head before handling food Wednesday at the Salvation Army in Janesville. Local nonprofits are seeing increasing need and dwindling resources, and they’re pleading for financial help.

At the Salvation Army in Janesville, one fundraiser has been rescheduled three times. Another has been canceled, said Patrice Gabower, volunteer and special events coordinator.

The organization’s Others Luncheon will not be held this year. The Salvation Army Women’s Auxiliary fabric sale has been postponed until April 30-May 2—unless Gov. Tony Evers extends his stay-at-home order.

Gabower is concerned that even if the order is lifted, people still might avoid large groups.

The auxiliary’s other fundraiser is a flower sale usually held around Mother’s Day. Again, it’s uncertain how long the stay-at-home order will last.

Meanwhile, the number of lunches needed in Janesville and Beloit has increased.

“We are seeing the numbers increasing right in front of our eyes,” Gabower said. “Every day they’re increasing.”

Usually, lunches are prepared in-house and served at each location. It’s economical, and volunteers help prepare and serve the meals.

Now, social-distancing rules limit the number of volunteers in the kitchen and diners in the dining room. The meals have become sack lunches, and only staff and a handful of volunteers are assembling them. 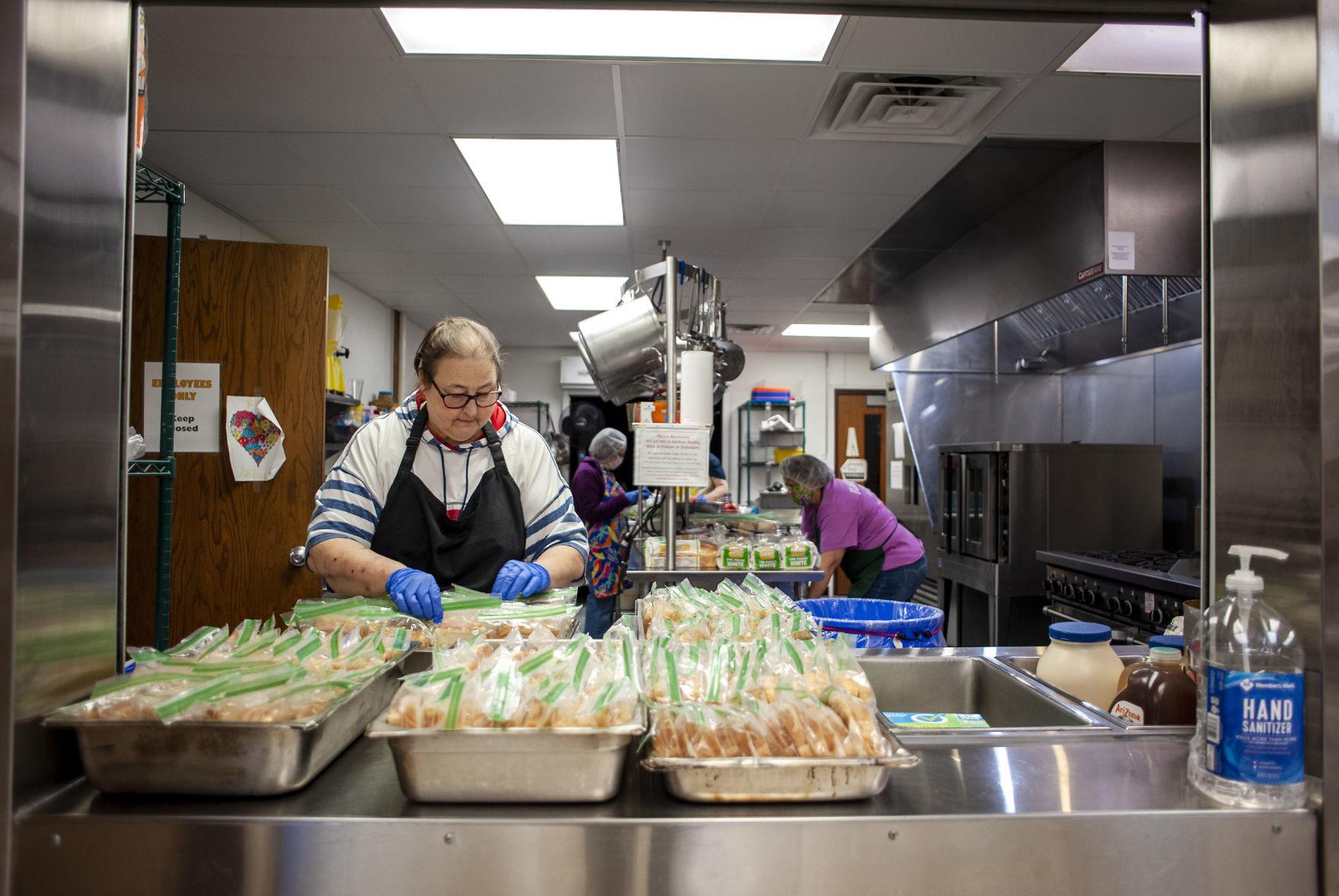 Cheryl Maveety counts sandwiches while preparing lunch with other volunteers Wednesday at the Salvation Army in Janesville. The organization has changed the way it serves lunch to follow social-distancing guidelines.

The lunches themselves cost more, Gabower said, because single-serve items are more expensive. It now costs about $1,000 a week to serve lunch.

The Salvation Army used to budget about $500 a month for meals because it got in-kind donations from grocery stores and food distributors. The organization can no longer accept such donations because of coronavirus concerns.

It had to cancel two fundraising events because of the pandemic. It also had to stop offering before- and after-school child care at area schools when the schools closed. Although the service is considered an affordable alternative to day care, it still is a revenue source for the YWCA.

“Families are being challenged,” she said.

These days, YWCA employees use their work time to seek new funding sources.

At ECHO, the need has increased exponentially, and Locher expects it to get even more pressing.

On March 16, ECHO staffers locked their doors. Clients who need food call them from the parking lot across the street, and a volunteer puts the prepackaged groceries in their car trunks. 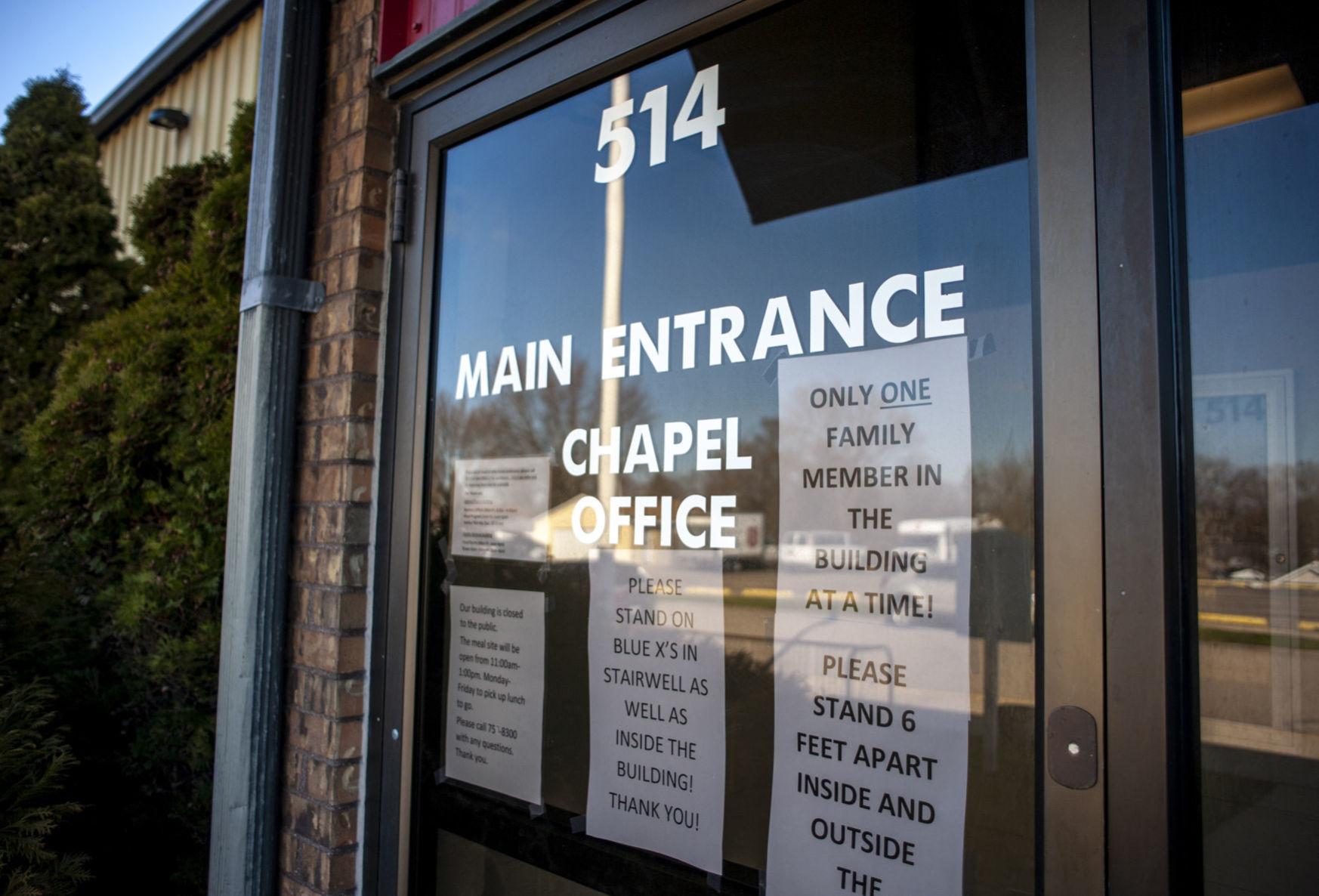 Signs on the Salvation Army entrance in Janesville explain safety guidelines to be observed on the group’s property at 514 Sutherland Ave. in Janesville.

A popular fundraising dance had to be canceled, and Locher is concerned about two others that are coming up.

The first is the Church World Service’s CROP Hunger Walk. The walk will be online this year, and Locher worries that it won’t raise as much money. The annual walk is a community gathering, and that part will be missing this year.

The fate of the National Letter Carriers food drive in May is still unknown. Those donations help ECHO get through the first part of the summer.

Local nonprofits hope that people who are still working are willing to reach into their pockets to help. Most can’t accept in-kind donations, but they can take money.

“We’re really focusing on financial gifts at this time,” the YWCA’s Moore said.

The United Way has stepped up its efforts to help local nonprofits but is facing challenges of its own.

In an email to The Gazette, United Way Executive Director Mary Fanning-Penny said more than 62% of donations come from employees who contribute through payroll deductions.

“As employers face difficult decisions to temporarily idle facilities, lay off employees or further reduce operations and workforce, this may necessitate grant funding reductions to the very programs our communities rely upon to provide critical services during this health and economic crisis,” Fanning-Penny said. “At this point in time, it’s simply too early to tell what the impact may be.”

Fanning-Penny encourages people to “double down” during this time of need by donating to the United Way’s COVID-19 Action Fund.

The federal CARES Act that was signed into law March 27 allows people a $300 “nonitemized” charitable deduction. The deduction is only available for people who don’t itemize their taxes and can only be used for financial donations, not in-kind donations.

Domestic violence will increase during stay-at-home orders to slow the spread of the coronavirus, experts warn.

“People in abusive relationships are not safer at home,” said Jessica Luepnitz of the YWCA Rock County. “Social distancing can be devastating in times like this.”

Luepnitz is the director of the Alternatives to Violence program, which helps domestic violence victims who are in crisis.

She and other advocates fear the situation will get worse the longer COVID-19 isolates people in their homes.

“My worse fear is that an abusive individual can harm another to the point of death,” Luepnitz said.

She emphasized that the YWCA crisis line is still staffed, the local emergency shelter is still open, and help is still available.

“We are here by calling or texting,” Luepnitz said.

As of midweek, the crisis line had seen only a slight increase in calls.

“That could be because abused individuals may not be able to reach out through our call or text line, given that the abuser is in the same home with them,” Luepnitz said.

She expects calls to spike once the “Safer at Home” order is lifted.

“That’s when we are bracing ourselves,” she said. “Once the order is lifted, people will get a free moment to make a phone call or to make a report to law enforcement.”

Gov. Tony Evers and the state Department of Health Services issued the order effective March 25 through April 24. It says all Wisconsin residents must stay at home as much as possible.

Most domestic violence occurs in the home, “where families are isolated even more than before COVID-19,” Luepnitz said.

She worried that, with children home from school and from any other extracurricular activities, they might become witnesses to abuse or become victims themselves.

“These children may not have an outlet or support,” Luepnitz said, “so they won’t be able to report abuse to a teacher, coach or guidance counselor.”

She also is concerned about the increased emotional toll on people experiencing abuse.

When a person is constantly in fear, the person experiences more uncertainty and hopelessness about what to do, Luepnitz added.

Angela Moore, YWCA executive director, said a lack of food or money can stress even the healthiest relationships.

She pointed to increases in domestic violence around the world where the pandemic has kept victims trapped with their abusers.

If someone is worried about a person who might be in danger, the best thing to do is to listen and to offer information on where the person can go for help, Luepnitz said.

People may call the YWCA helpline to get information about resources.

The YWCA shelter has 33 beds in nine bedrooms and currently houses eight adults and 17 children.

If you are a victim of domestic violence, the YWCA Rock County can help.

In response to the COVID-19 pandemic, the Stateline Community Foundation has given the YWCA Rock County a $4,000 grant.

As of Thursday, the shelter had 21 adults and 51 children living in its domestic violence shelter and transitional living apartments, according to a news release.

YWCA Rock County Executive Director Angela Moore said in the release that this money will help give victims a place to turn to 24/7.

“Historically, domestic violence and child abuse rates increase during times of crisis,” she said. “With Safer at Home,’ victims may be finding themselves in constant close contact with their abuser.” 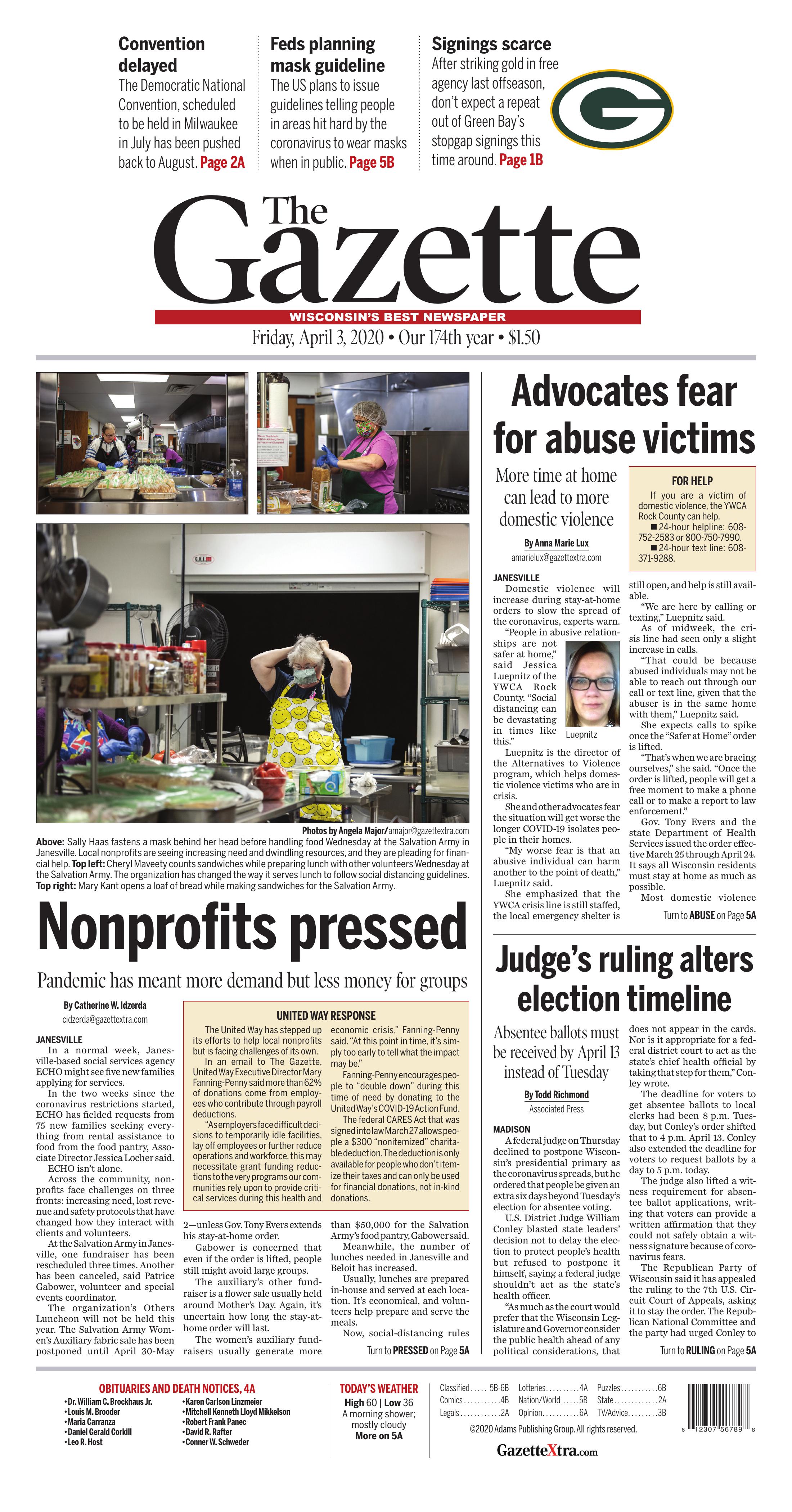