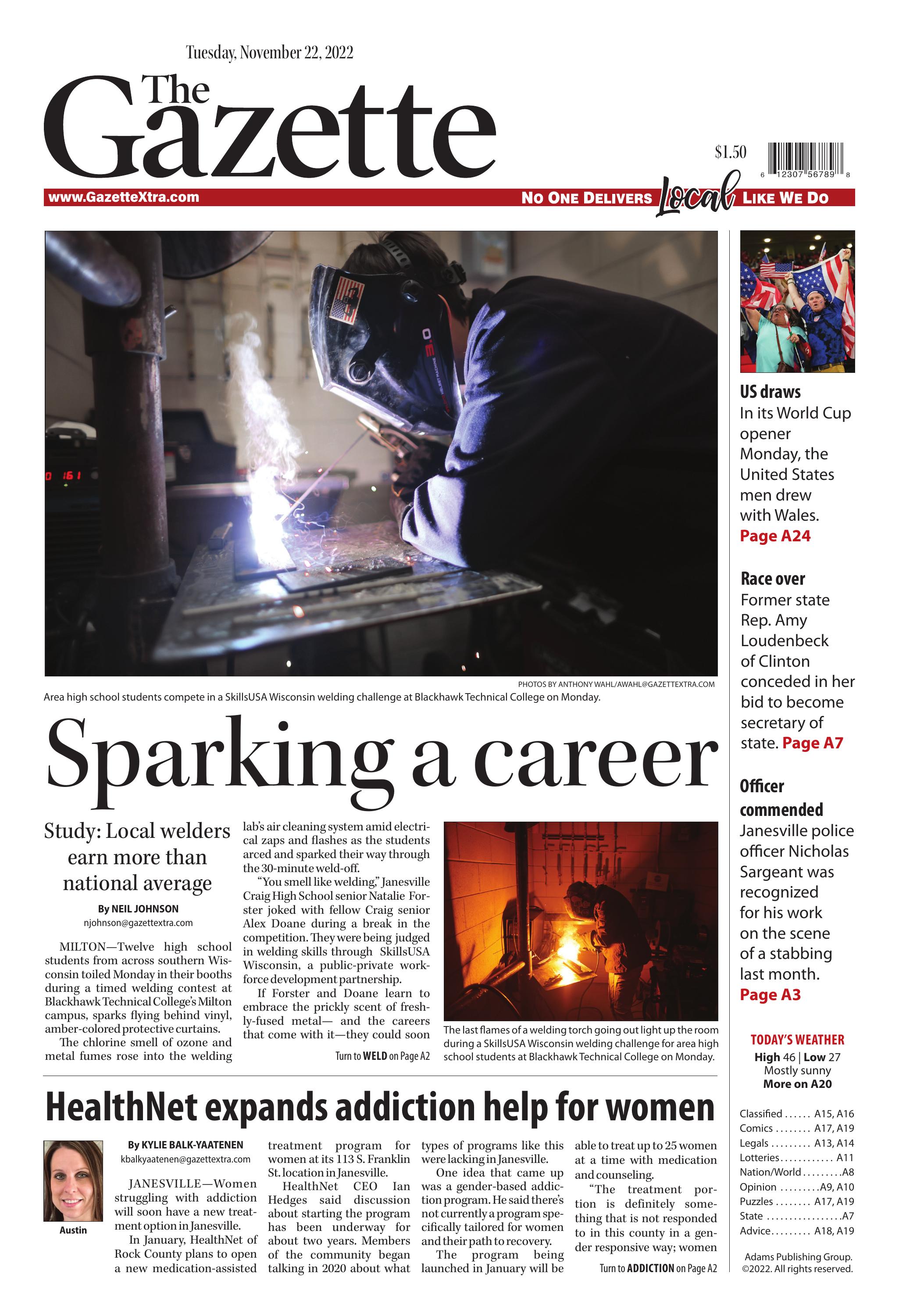 The chlorine smell of ozone and metal fumes rose into the welding lab’s air cleaning system amid electrical zaps and flashes as the students arced and sparked their way through the 30-minute weld-off.

“You smell like welding,” Janesville Craig High School senior Natalie Forster joked with fellow Craig senior Alex Doane during a break in the competition. They were being judged in welding skills through SkillsUSA Wisconsin, a public-private workforce development partnership.

If Forster and Doane learn to embrace the prickly scent of freshly-fused metal— and the careers that come with it—they could soon also realize the smell of money.

According to a new study by national research firm Construction Coverage, the average annual pay for welders in industry-heavy Rock County is $52,359, about $5,300 more than the national average.

The study lists pay for welders in the Janesville-Beloit metro as ranking in the top 25 for all small U.S. cities. 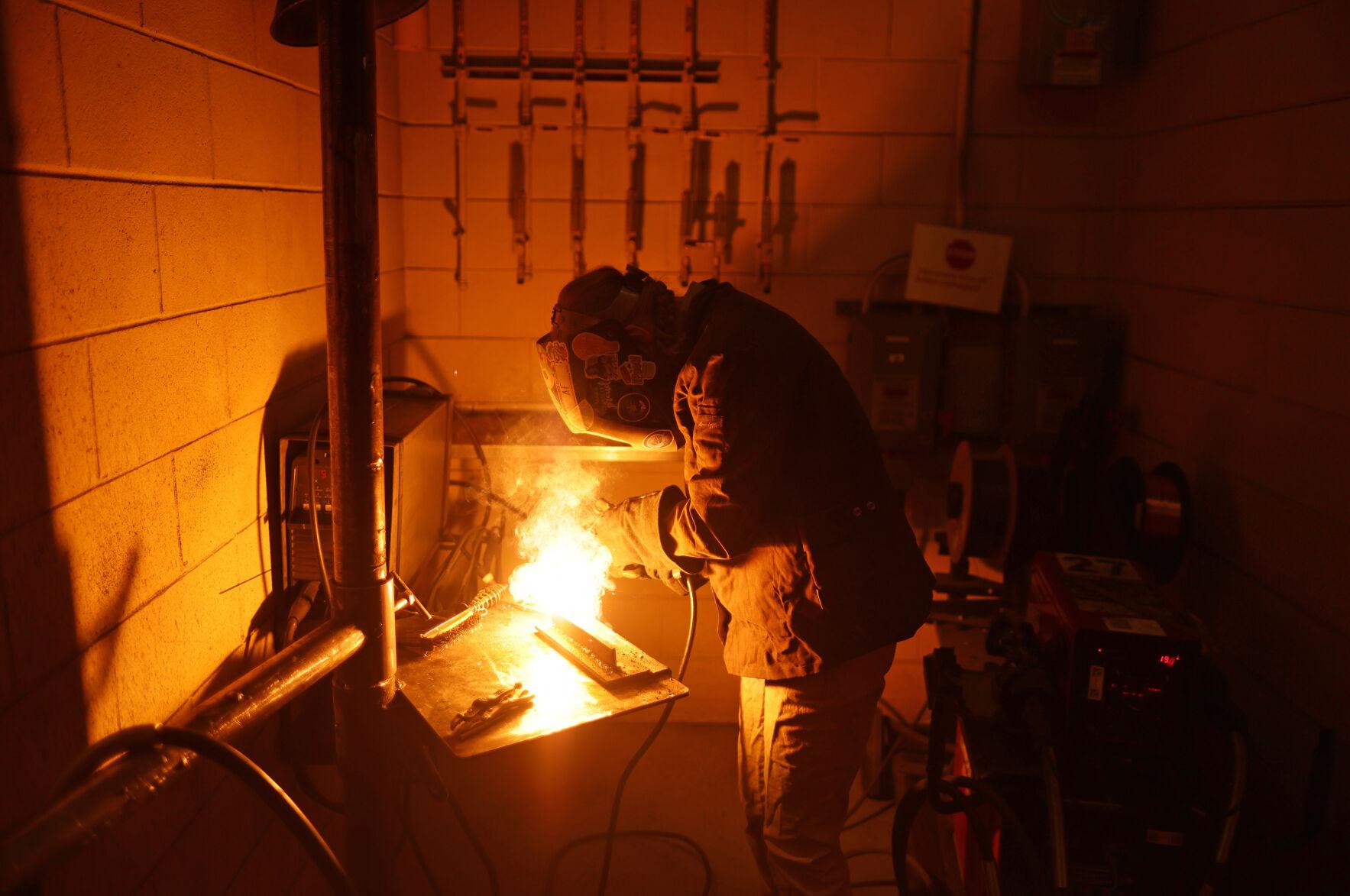 The last flames of a welding torch going out light up the room during a SkillsUSA Wisconsin welding challenge for area high school students at Blackhawk Technical College on Monday.

Mauer said pay has been climbing for welders here in part because local manufacturers are still grappling with a worker shortage. This is as manufacturers continue to scramble to catch up on production and supply bottlenecks that came during the COVID-19 pandemic.

The manufacturing and production industry has for the last decade already been weathering a steady loss of experienced workers as Baby Boomers retire. It makes now an opportune time for students like Forster and Doane to give welding a serious look. 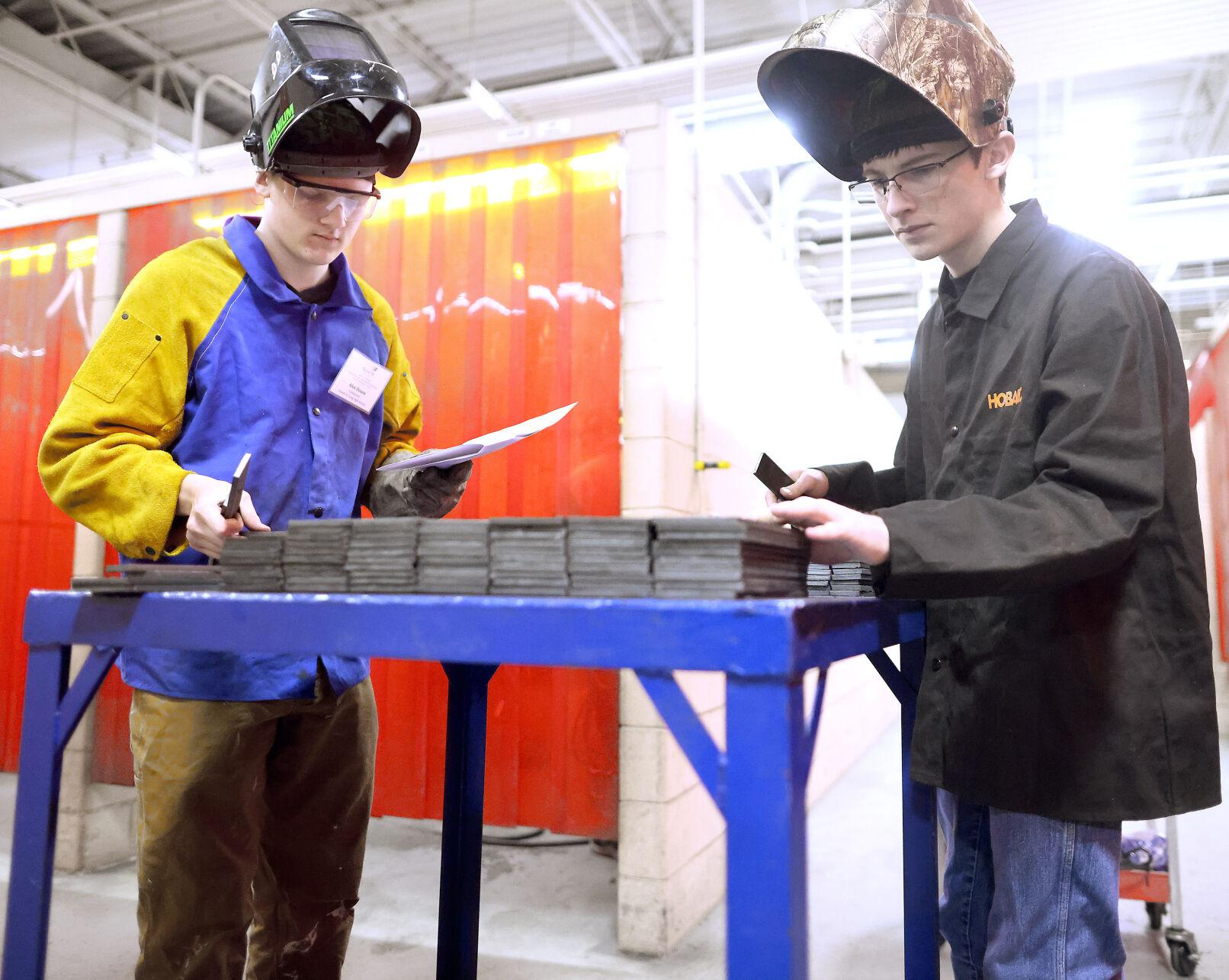 q1Participants in a SkillsUSA Wisconsin welding challenge for choose their materials while at Blackhawk Technical College on Monday, Nov. 21.

The U.S. Bureau of Labor Statistics shows that the Beloit-Janesville metro area supports about 400 welders, accounting for just over 5% of all local production workers.

Mauer said it’s common now to see welders paid $23 to $25 an hour locally as companies compete with each other for a finite number of trained. That’s on par with average pay for drivers who work in heavy trucking, according to Bureau of Labor statistics.

“The supply and demand trend for welders is the big issue. There’s a lot of welding jobs compared to a small number of welders to fill those roles. We’ve seen wages increase pretty substantially since the pandemic,” Mauer said.

Janesville is only outranked on welder pay in Wisconsin by one other small city area, the Wausau metro area. The Construction Coverage study shows it holds a $1,000-a-year edge on Janesville-Beloit for welder pay.

Both metro areas have a higher proportion of production and manufacturing jobs compared to the national average. Janesville this year has had between 10,600 and 10,900 manufacturing jobs, a number that’s held steady since about 2019, federal labor data shows.

He said labor statistics don’t count jobs in which welding may be one skill in a handful that workers need, and welding inspectors are uncounted.

“It’s a wide-open thing right now, but not enough people know it,” Phillips said. “It’s not like when you turn on the TV and everything’s a drama about police or firefighters or nurses and doctors. You obviously don’t see too many shows on TV about the life of a welding fabricator.”

No, you don’t. But Mauer said he’s seeing a growing number of younger people hopping aboard welding programs.

And he and his coworker, welding instructor David Rodden, said it’s more common now than in years past to see younger students come in during their free time for extra work on welding skills. 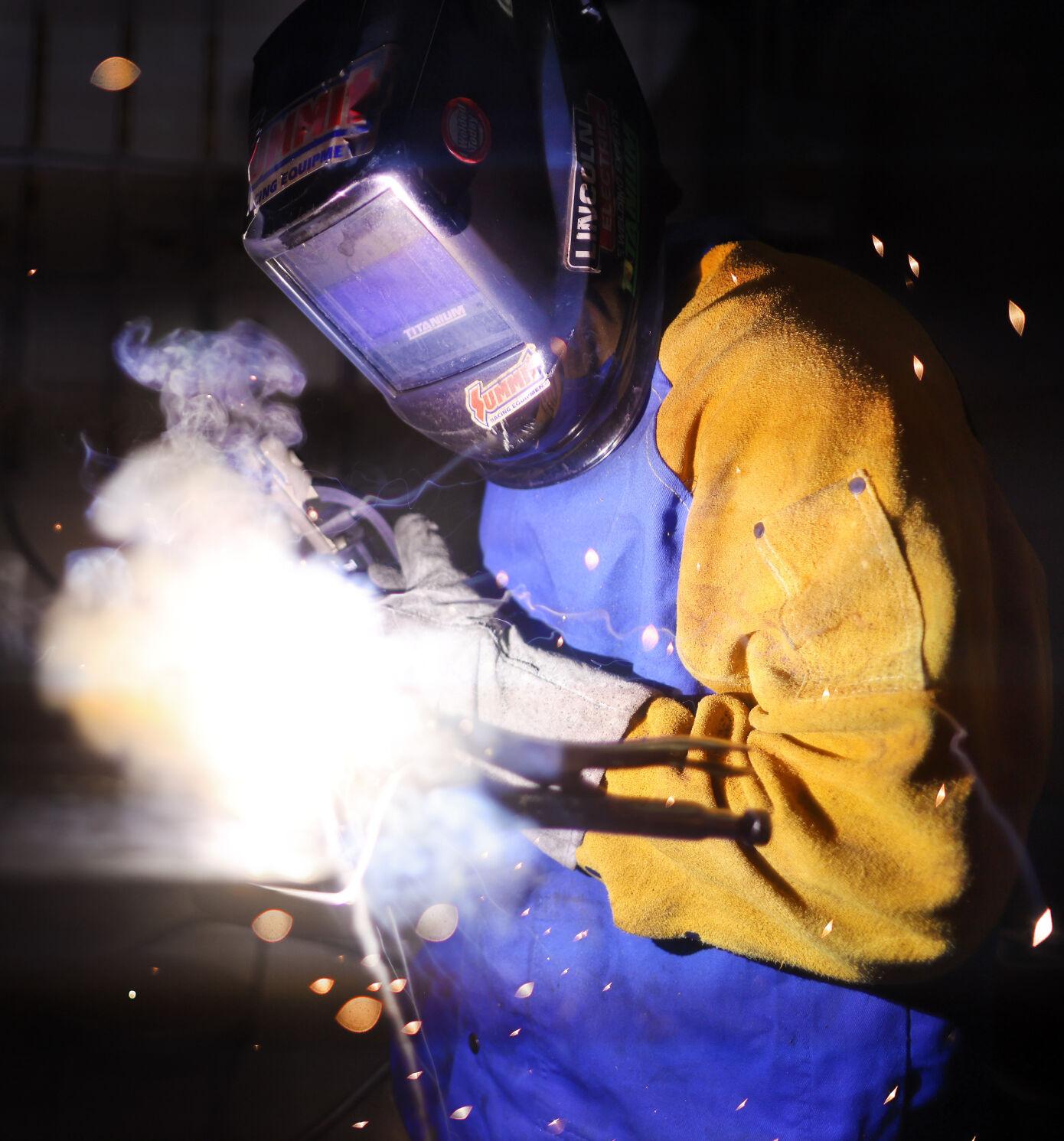 Mauer said the college’s timed, 30-minute welding competition offered students a taste of one of the big parts of life as a working welder: keeping up with the clock.

JANESVILLE—Women struggling with addiction will soon have a new treatment option in Janesville.

In January, HealthNet of Rock County plans to open a new medication-assisted treatment program for women at its 113 S. Franklin St. location in Janesville.

HealthNet CEO Ian Hedges said discussion about starting the program has been underway for about two years. Members of the community began talking in 2020 about what types of programs like this were lacking in Janesville.

One idea that came up was a gender-based addiction program. He said there’s not currently a program specifically tailored for women and their path to recovery.

The program being launched in January will be able to treat up to 25 women at a time with medication and counseling.

“The treatment portion is definitely something that is not responded to in this county in a gender responsive way; women have unique challenges to addiction that are unaddressed and gender related trauma is certainly one of those,” Hedges said. “I think women are also more afraid of revealing that there is a substance issue because of worry of how that will affect custody of their children.”

Hedges said one of the last steps as the program prepares to launch, being certified by medicaid and HMOs, is pending He said supplemental funding will fill the gaps while they are waiting for reimbursement based services. He said there is also talk of using volunteers for some aspects of the program.

“The volunteers would get a background check and screened,” he said. “This will help to make sure if mothers have to bring their children here that they have someone to watch their children while they are in treatment, because that is the biggest barrier to care.”

Kristin Austin, director of the behavioral health clinic at HealthNet, said the treatment will be for individuals who struggle with opiate and alcohol addiction, helping them to deal with stress, cravings and triggers that are a part of the recovery process. The program will also be able to prescribe medication to help them recover from addiction in a safe, non-lethal way.

Austin said the program will offer phase-based recovery in which individuals would start out participating in twice-weekly group meetings. That would phase down as they progressed in treatment. There would also be individual counseling.

“The groups will focus on coping, relapse, focusing on how to rebuild their lives and focusing on those things that continue to impede recovery,” Austin said. “In those individual sessions we would focus on more individual intimate concerns that they may have that they might not feel as comfortable sharing in-group and there would be a focus on mental health because that is a component of substance abuse.”

Austin said medications would “block the receptors and allow the individual to stop struggling with urges and cravings, it makes them unable to get high and allows them to have a substitute of sorts, that’s not going to harm them.”

“Opiates and alcohol are the main addictions identified in Rock County but it’s not to say we can’t talk about other substances,” Austin also noted.

She said many individuals struggle with mental health issues and addiction can stem from that.

Austin said the program will also be able to respond to crisis situations by increasing treatments, meeting with individuals more often and by identifying the triggers that led to the crisis.

“We are also able to, depending on how serious the crisis is, link them to specific services such as the county if they have additional support like residential treatment or detoxing,” she said.