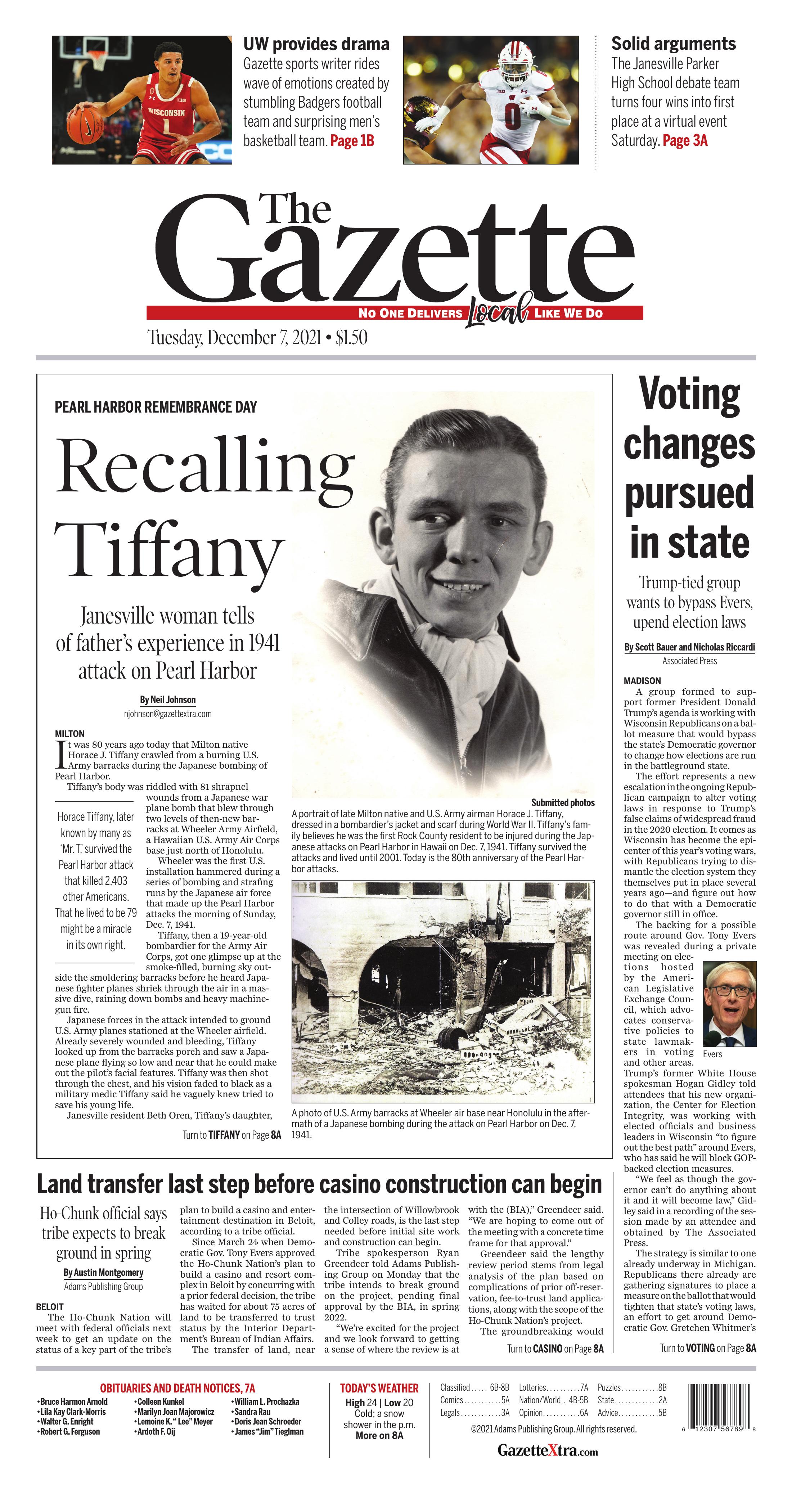 The Ho-Chunk Nation’s Beloit casino and resort project took a major step forward when Gov. Tony Evers ruled in favor of the project’s proposed site being declared trust land for the tribe.

The Ho-Chunk Nation will meet with federal officials next week to get an update on the status of a key part of the tribe’s plan to build a casino and entertainment destination in Beloit, according to a tribe official.

Since March 24 when Democratic Gov. Tony Evers approved the Ho-Chunk Nation’s plan to build a casino and resort complex in Beloit by concurring with a prior federal decision, the tribe has waited for about 75 acres of land to be transferred to trust status by the Interior Department’s Bureau of Indian Affairs.

The transfer of land, near the intersection of Willowbrook and Colley roads, is the last step needed before initial site work and construction can begin.

Tribe spokesperson Ryan Greendeer told Adams Publishing Group on Monday that the tribe intends to break ground on the project, pending final approval by the BIA, in spring 2022.

“We’re excited for the project and we look forward to getting a sense of where the review is at with the (BIA),” Greendeer said. “We are hoping to come out of the meeting with a concrete time frame for that approval.”

Greendeer said the lengthy review period stems from legal analysis of the plan based on complications of prior off-reservation, fee-to-trust land applications, along with the scope of the Ho-Chunk Nation’s project.

The groundbreaking would initiate phase one of a multiphase project that would see the construction of the casino, a restaurant and a hotel, Greendeer said.

The project design phase is nearing the final stages, he added, and site work was conducted earlier this year to aid in finalizing design.

Once the casino is operational, Greendeer said revenue generated from the casino will help fund future phases of the project.

“We are coming up on final designs,” Greendeer said. “From there, we can start talking about realizing cost estimates. It’s taking another step in the process while we are waiting for the application to be approved.”

The tribe also will need to determine a development agreement with the city of Beloit.

A portrait of late Milton native and U.S. Army airman Horace J. Tiffany, in repose in uniform during World War II. Tiffany’s family believes he was the first Rock County resident to be injured during the Japanese attacks on Pearl Harbor in Hawaii on Dec. 7, 1941. Tiffany survived Pearl Harbor and lived until 2001. Today is the 80th anniversary of the attack on Pearl Harbor.

It was 80 years ago today that Milton native Horace J. Tiffany crawled from a burning U.S. Army barracks during the Japanese bombing of Pearl Harbor.

Tiffany’s body was riddled with 81 shrapnel wounds from a Japanese war plane bomb that blew through two levels of then-new barracks at Wheeler Army Airfield, a Hawaiian U.S. Army Air Corps base just north of Honolulu.

Wheeler was the first U.S. installation hammered during a series of bombing and strafing runs by the Japanese air force that made up the Pearl Harbor attacks the morning of Sunday, Dec. 7, 1941. 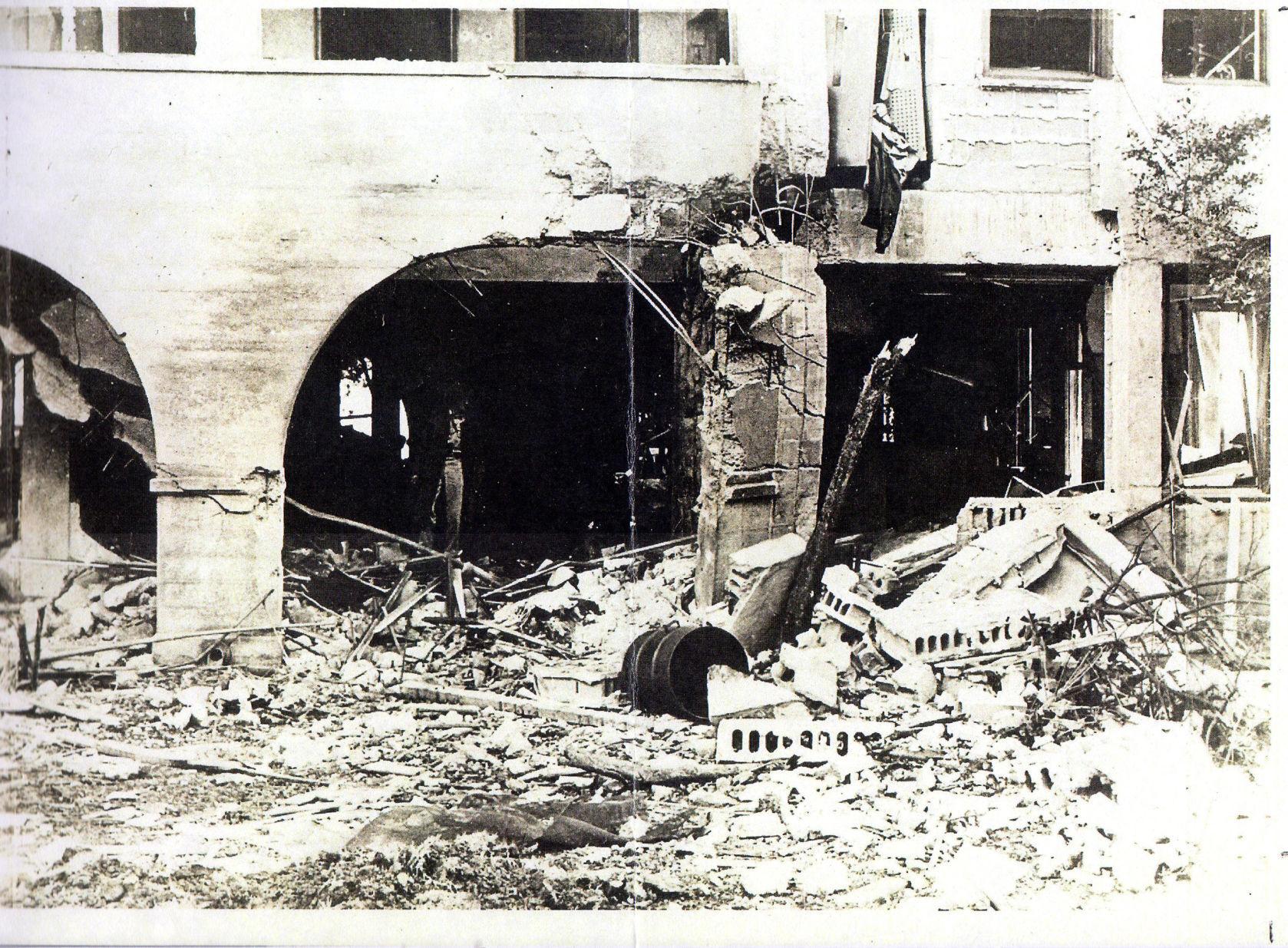 A photo of U.S. Army barracks at Wheeler air base near Honolulu in the aftermath of a Japanese bombing during the attack on Pearl Harbor on Dec. 7, 1941.

Tiffany, then a 19-year-old bombardier for the Army Air Corps, got one glimpse up at the smoke-filled, burning sky outside the smoldering barracks before he heard Japanese fighter planes shriek through the air in a massive dive, raining down bombs and heavy machine-gun fire.

Japanese forces in the attack intended to ground U.S. Army planes stationed at the Wheeler airfield. Already severely wounded and bleeding, Tiffany looked up from the barracks porch and saw a Japanese plane flying so low and near that he could make out the pilot’s facial features. Tiffany was then shot through the chest, and his vision faded to black as a military medic Tiffany said he vaguely knew tried to save his young life.

Tiffany, a dairy farm boy who had graduated from Milton Union High School in 1940, was one of 1,143 Americans wounded during Pearl Harbor, one of the bloodiest attacks ever on American soil. His family believes he was the first Rock County resident injured in the infamous World War II battle.

Horace Tiffany, later known by many as “Mr. T,” survived the Pearl Harbor attack that killed 2,403 other Americans. That he lived to be 79 might be a miracle in its own right.

But his daughter said what is as remarkable as her father’s survival is this: After Tiffany was treated at a military hospital in California and recovered from his massive injuries, he decided to stay in the Army Air Corps’ Sixth Pursuit Squadron to fight in World War II for another three years. 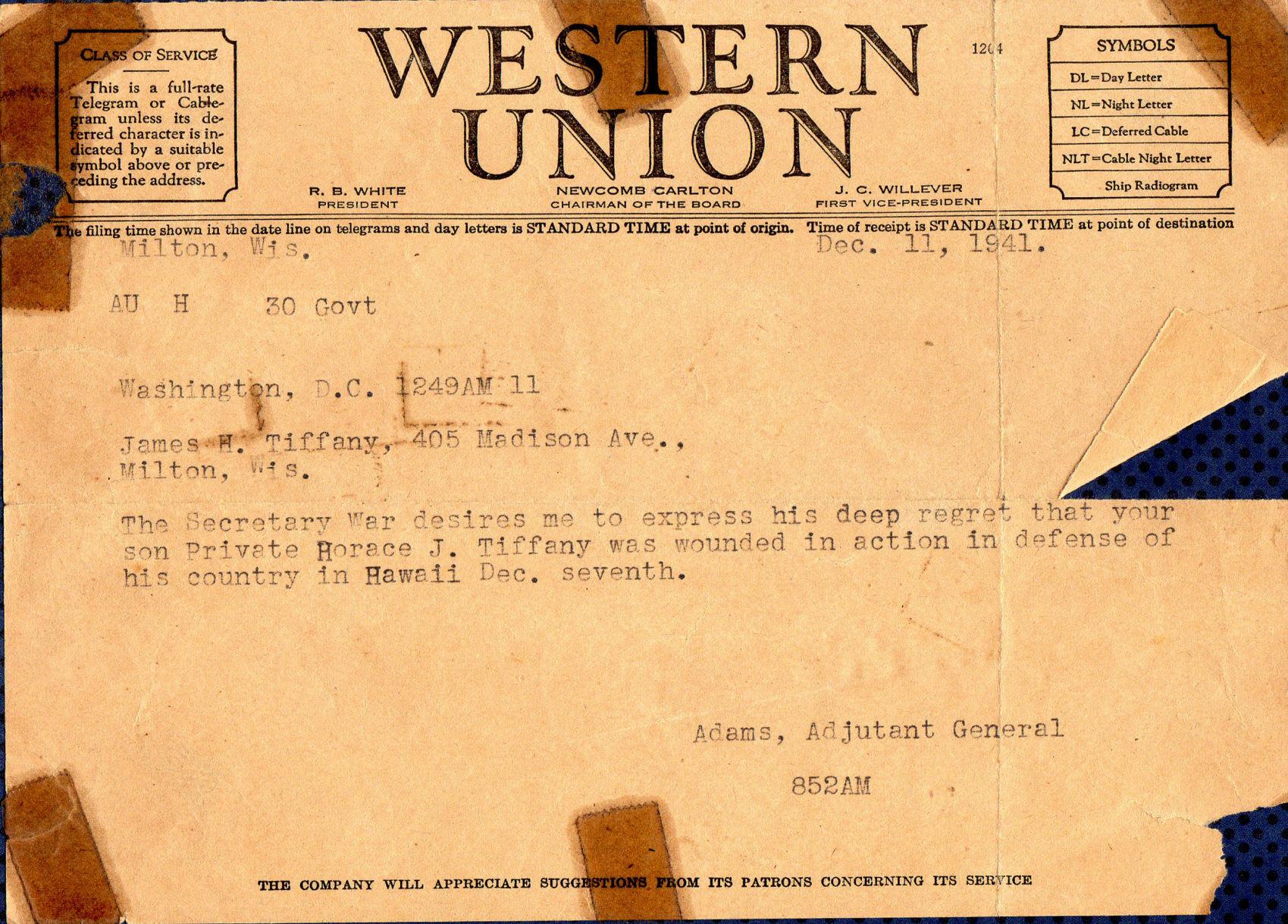 A 1941 Western Union telegram that informs the family of then-19-year-old U.S. Army private and Milton native Horace Tiffany that he had been wounded in action during the Japanese military’s attack on Pearl Harbor on Dec. 7, 1941.

“He could have gotten out of the service at that time. He was missing a big chunk of his leg the size of a football. The rest of his life, he had shrapnel stuck all over inside his body. It would occasionally surface in his skin and he’d get infected,” Oren said. “But as a young man, all he wanted to do was be a part of the effort. He wanted to see that war through to finish off the fight.

“A little farm boy from Milton who was 19 ... to grow up that much and to become that dedicated to the United States. I’m very proud of it,” Oren said.

Tiffany flew 100 hours of missions and was awarded a letter of commendation for bravery and a Purple Heart before he returned home to Rock County. He graduated from Milton College in 1949 and then returned to the family farm.

Before that, he stayed on in the Army until 1943, spending a period of time in the frigid Aleutian Islands of Alaska—the only part of U.S. soil occupied by Japanese forces during WWII.

Like many military veterans, Oren said, her father seldom spoke of the horrors and pain he witnessed at Pearl Harbor, and he didn’t share many details of the rest of his tour in the war, in which he served as a gunnery sergeant—a promotion in rank he earned after he continued his enlistment after Pearl Harbor.

Tiffany died in 2001, just a few years after he finally started speaking openly of his war-time experiences. 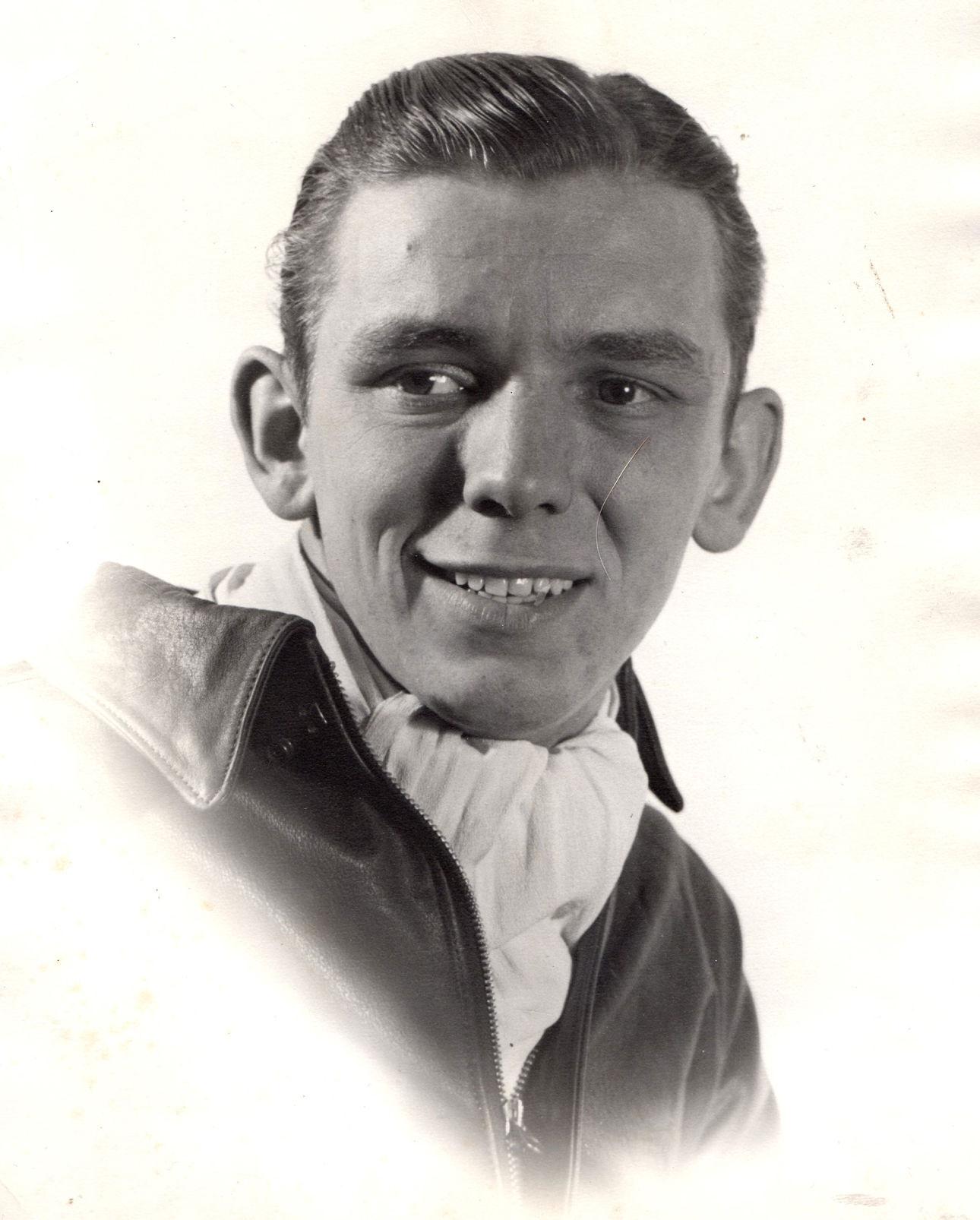 A portrait of late Milton native and U.S. Army airman Horace J. Tiffany, dressed in a bombardier’s jacket and scarf during World War II. Tiffany’s family believes he was the first Rock County resident to be injured during the Japanese attacks on Pearl Harbor in Hawaii on Dec. 7, 1941. Tiffany survived the attacks and lived until 2001. Today is the 80th anniversary of the Pearl Harbor attacks.

Before then, Oren said she could never pry from her father any explanation for the angry shrapnel scars that covered parts of his body.

“He’d just tell me ‘I got these wounds from being a damned fool,’” Oren said.

Oren said her mother, Margie Tiffany, and her grandmother, Gladys Tiffany, always maintained that her father was the first Rock County resident to be wounded in action in Pearl Harbor.

Oren said that has never been fully verified. But on a 2018 trip she took to Pearl Harbor, Oren was able to retrace the timeline and details of what her father might have been up to in the hours just before the Japanese attack.

Pearl Harbor military historians Oren visited in Hawaii indicated that very few people in Tiffany’s division were even at the Wheeler airbase’s barracks during the Pearl Harbor attacks because many had taken some post-training leave.

Late in his life, Horace Tiffany relayed his experience of the attack to Oren’s brother, Mike Tiffany.

In the telling, Horace Tiffany gave a humble explanation of why he was in the barracks the infamous morning that Japanese forces raided Hawaii by air. He said he had been on a day leave the night before in nearby Oahu but got tired after he had “a little too much to drink.”

Tiffany decided to head back to his barracks for some sleep. He awoke early the next day to explosions and sirens.

Tiffany also recalled a 1981 trip he and his spouse took to Hawaii to visit Wheeler Army Airfield. It was the 40-year anniversary of Pearl Harbor. In his narrative, he said the memory of the attacks and the base itself “still gives me the creeps. But we won; that’s what matters.”

In his recounting, Tiffany told of how the medic—who on Dec. 7, 1941, tended his chest wound and shrapnel injuries—said he had done so without any hope that Tiffany would live. Tiffany said his next memory was waking up weeks later in a California hospital. A crew of Salvation Army nurses were tending to his wounds.

That always stuck with Tiffany, he told his son: “I still put a buck or two in those (Salvation Army) Christmas buckets every time I pass one.”