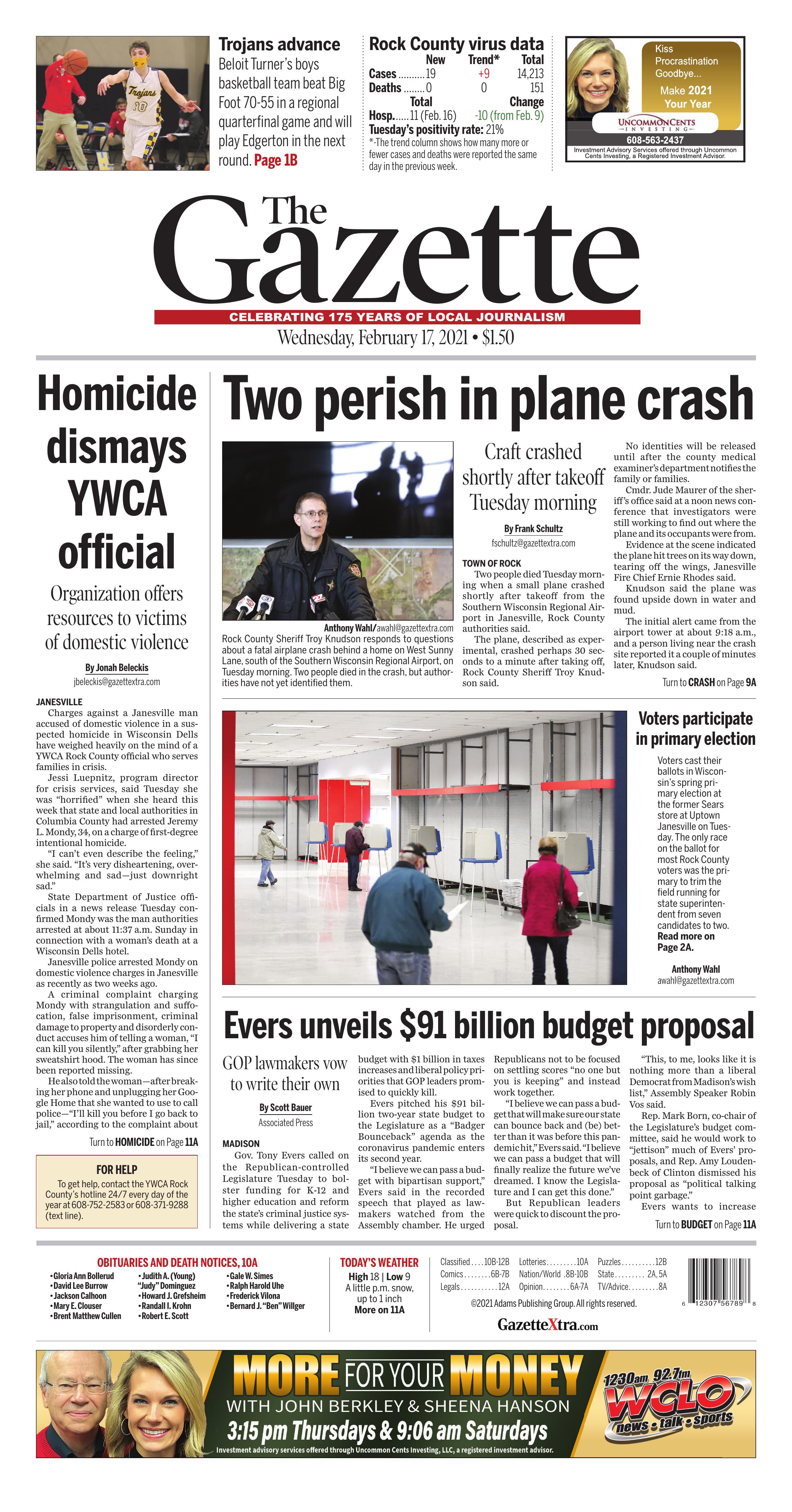 The plane, described as experimental, crashed perhaps 30 seconds to a minute after taking off, Rock County Sheriff Troy Knudson said.

No identities will be released until after the county medical examiner’s department notifies the family or families.

Cmdr. Jude Maurer of the sheriff’s office said at a noon news conference that investigators were still working to find out where the plane and its occupants were from.

Evidence at the scene indicated the plane hit trees on its way down, tearing off the wings, Janesville Fire Chief Ernie Rhodes said.

Knudson said the plane was found upside down in water and mud.

The initial alert came from the airport tower at about 9:18 a.m., and a person living near the crash site reported it a couple of minutes later, Knudson said.

The crash site was about one-quarter mile south of West Sunny Lane in a swampy area, and rescuers’ ATVs and four-wheel drive vehicles could not get through the deep snow and downed trees, Rhodes said.

They found the two people deceased inside the plane, which was partially submerged in ice and mud, Rhodes said.

The plane was in contact with the airport tower for a very short time and reported a problem, but the nature of the problem was unknown, Knudson said.

The crash site was about 1 mile south of the airport, not far from the Rock River, Knudson said.

Investigators believe the pilot was trying to return to the airport when the plane crashed.

Authorities planned to preserve the crash site until investigators from the National Transportation Safety Board arrive from Chicago, probably today.

The crash was a rare occurrence here.

It was the first fatal crash at the airport since 1999, said Cynthia Hevel, a longtime airport employee.

Mark Jacobson, 34, the owner of Gail Force Air Charters, was the lone occupant of a plane that crashed shortly after takeoff on Aug. 27, 1999, according to Gazette files.

As in Tuesday’s crash, Jacobson’s plane was described as experimental. A Gazette article at the time quoted then-Sheriff Eric Runaas as saying it was the first fatal crash at the airport in at least 30 years. 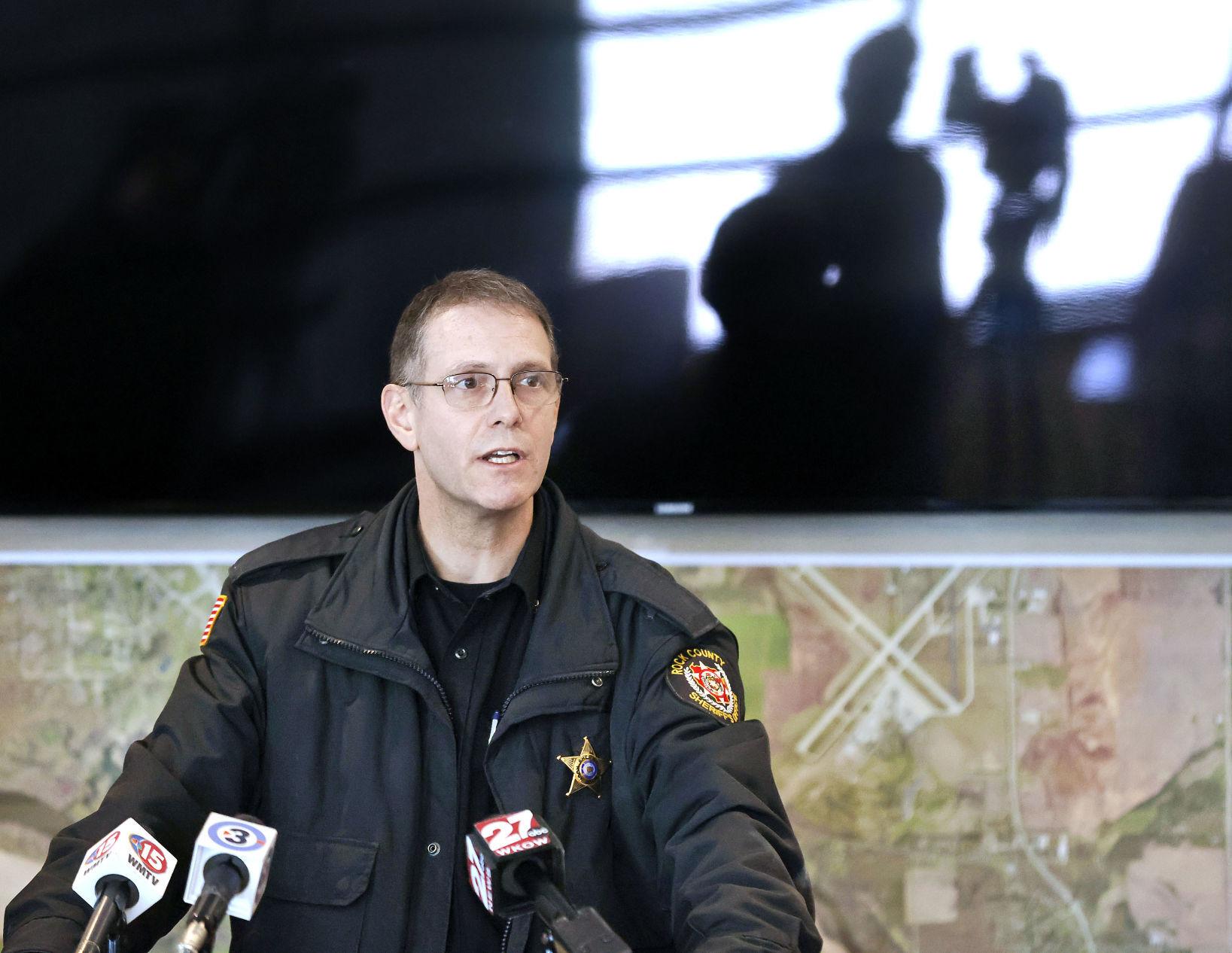 Rock County Sheriff Troy Knudson responds to questions about a fatal airplane crash behind a home on West Sunny Lane, south of the Southern Wisconsin Regional Airport, on Tuesday morning. Two people died in the crash, but authorities have not yet identified them.

Gov. Tony Evers called on the Republican-controlled Legislature Tuesday to bolster funding for K-12 and higher education and reform the state’s criminal justice systems while delivering a state budget with $1 billion in taxes increases and liberal policy priorities that GOP leaders promised to quickly kill.

Evers pitched his $91 billion two-year state budget to the Legislature as a “Badger Bounceback” agenda as the coronavirus pandemic enters its second year.

“I believe we can pass a budget with bipartisan support,” Evers said in the recorded speech that played as lawmakers watched from the Assembly chamber. He urged Republicans not to be focused on settling scores “no one but you is keeping” and instead work together.

But Republican leaders were quick to discount the proposal.

“This, to me, looks like it is nothing more than a liberal Democrat from Madison’s wish list,” Assembly Speaker Robin Vos said.

Rep. Mark Born, co-chair of the Legislature’s budget committee, said he would work to “jettison” much of Evers’ proposals, and Rep. Amy Loudenbeck of Clinton dismissed his proposal as “political talking point garbage.”

Evers wants to increase funding for public and private K-12 schools by $1.6 billion, the largest increase ever; cut taxes for poor families; and raise taxes on manufacturers and the wealthy. He also wants to keep a UW System tuition freeze in place while increasing funding by $190 million and allowing UW to borrow money to offset losses caused by the pandemic.

His budget also would increase the legal age to vape or smoke tobacco from 18 to 21; cap enrollment in school choice programs; and allow families of fourth-graders to visit state parks for free.

State employees would receive a 2% pay increase in January and another 2% raise in 2023, similar to what they got in the current budget.

His criminal justice overhauls are designed to result in fewer juveniles and adults being sent to prison by largely expanding and changing parameters dictating how people are sentenced and released from confinement. His proposal also calls for treating 17-year-olds as juveniles, rather than adults as they are now.

Evers faulted a previous juvenile justice overhaul package with focusing too much on closing the troubled Lincoln Hills juvenile prison north of Wausau rather than taking a larger look at reforming the system. His latest plan would still close the current facility and replace it with smaller, regional prisons. Counties, rather than the state Department of Corrections, would have responsibility for juvenile offenders.

The Evers budget is a starting point for Republicans who will now rewrite the plan over the next several months before passing its own version later this summer.

This is the second budget that Evers, a Democrat, has delivered to a Republican-controlled Legislature. Two years ago nearly all of Evers’ proposed policy changes were removed before the Legislature passed a budget plan with nearly unanimous opposition from Democrats. Evers signed it anyway, after making numerous vetoes.

The two-year spending plan would increase state spending by 7.3% the first year, which begins in July, and 2% the second.

There are provisions Republicans are likely to embrace, including no increase in gas taxes and continuation of the UW tuition freeze. Evers is also calling for expanding rural broadband access and creating a $100 million venture capital fund and directing $200 million to small businesses hit hard by the pandemic, areas that traditionally find bipartisan support.

The budget increases taxes over two years by about $1.6 billion and reduces them by about $590 million, for a net increase of around $1 billion. That is largely due to reducing tax breaks for manufacturers and raising taxes on capital gains, two items Republicans have long opposed.

Evers’ tax cuts are primarily targeting poor people. The budget would quadruple the earned income tax credit for working poor families with one child and more than double it for families with two children. That would cost nearly $150 million over two years.

Rep. Amy Loudenbeck, R-Clinton, a member of the Legislature's Joint Finance Committee, in a statement: "I find it puzzling that after the Legislature rejected all of the Governor’s extreme policy proposals in his last proposed biennial spending plan, Governor Evers would direct his budget shop and cabinet to spend countless months assembling a budget that the Legislature will once again have to unravel and rewrite."

Sen. Janis Ringhand, D-Evansville, in a statement: "This budget continues the Governor’s commitment to getting Wisconsin through this pandemic, getting back to work, kids back in school and opening up our economy.

"I appreciate his focus on rural Wisconsin with new investments in roads, broadband and markets for Wisconsin farmers." 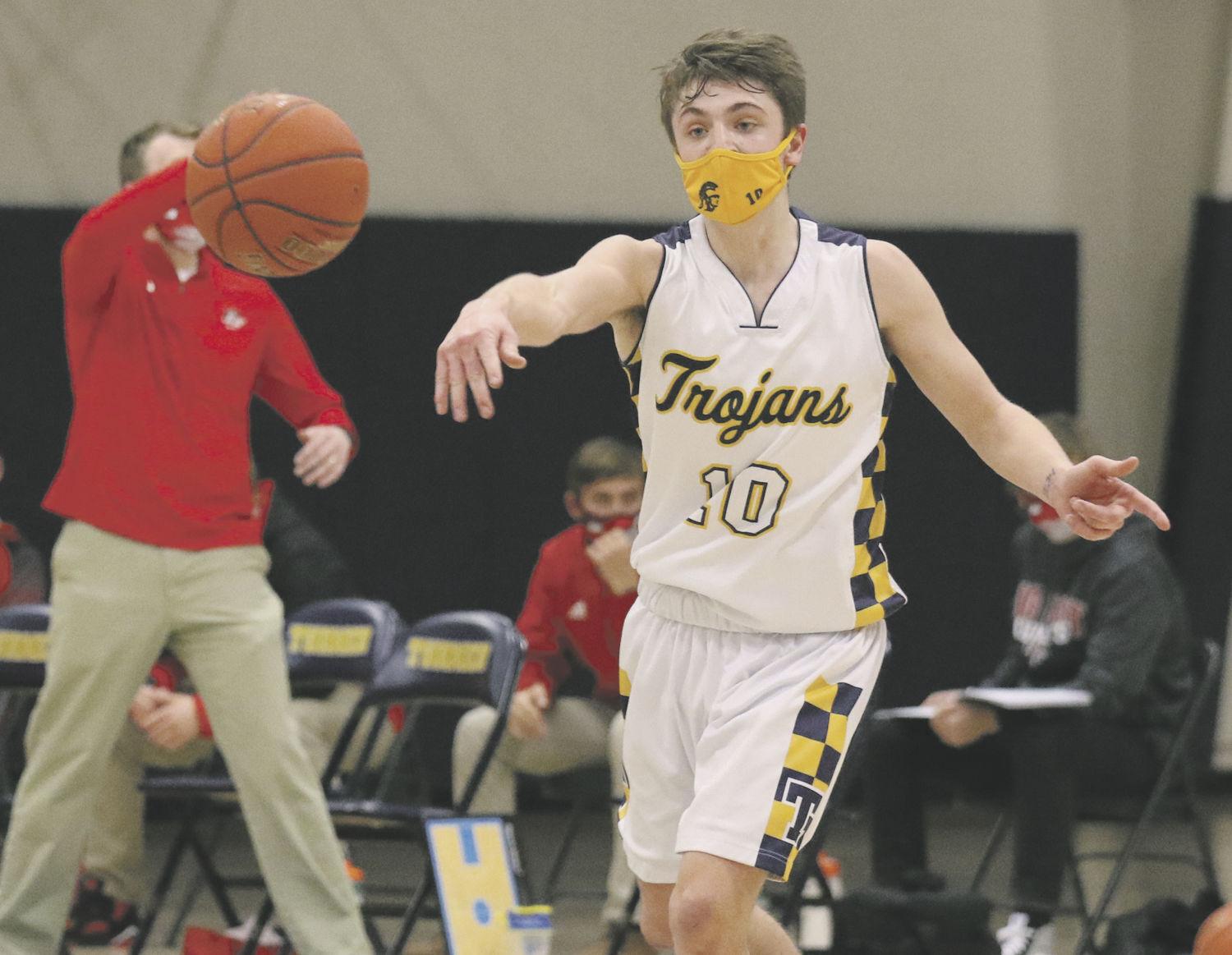 Jessi Luepnitz, program director for crisis services, said Tuesday she was “horrified” when she heard this week that state and local authorities in Columbia County had arrested Jeremy L. Mondy, 34, on a charge of first-degree intentional homicide.

“I can’t even describe the feeling,” she said. “It’s very disheartening, overwhelming and sad—just downright sad.”

State Department of Justice officials in a news release Tuesday confirmed Mondy was the man authorities arrested at about 11:37 a.m. Sunday in connection with a woman’s death at a Wisconsin Dells hotel.

Janesville police arrested Mondy on domestic violence charges in Janesville as recently as two weeks ago.

A criminal complaint charging Mondy with strangulation and suffocation, false imprisonment, criminal damage to property and disorderly conduct accuses him of telling a woman, “I can kill you silently,” after grabbing her sweatshirt hood. The woman has since been reported missing.

A Janesville man who was booked into the Columbia County Jail on a charge of first-degree intentional homicide also was arrested on domestic violence charges in Janesville earlier this month.

He also told the woman—after breaking her phone and unplugging her Google Home that she wanted to use to call police—“I’ll kill you before I go back to jail,” according to the complaint about an incident from Feb. 2 and 3.

The state news release says officials are not releasing the woman’s name at this time and that the family is requesting privacy.

Janesville police responded to another incident between Mondy and the woman on March 29, 2020. Prosecutors accused him of breaking the woman’s door frame and charged him with misdemeanor disorderly conduct and criminal damage to property.

Bond conditions in both of his cases included no-contact orders with the woman, court records show.

When asked if recent events had caused her to think about systemic changes, Luepnitz said the bond—whether a matter involves cash or a signature bond, or how high the cash amount should be—is an area to address.

She said Rock County launched an initiative at the end of 2019 and start of 2020 to educate domestic violence survivors about bonds before they could request to have a bond modified.

She said her hope is that survivors who want no-contact orders removed, for example, can hear from a professional before going through with their request, which is ultimately decided by a judge.

To more quickly connect high-risk domestic violence victims with services that can help them, the Janesville Police Department partnered with the YWCA Rock County to enact a new protocol.

Luepnitz also praised a protocol called the Lethality Assessment Program that was implemented locally in 2018.

When the program came to Janesville, a police sergeant said it involved 11 questions, including ones about access to weapons and previous threats, that police can ask on the scene to determine if a survivor is at high risk.

At the time, Janesville police reported that 10 of the city’s 22 homicides from 1986 to 2012 were domestic violence-related.

Luepnitz said the program has increased the number of survivors who connect with an advocate and receive services such as safety planning, legal advocacy, case management and emergency shelter, if needed.

Much remains publicly unknown about the recent homicide. But Luepnitz said her organization feels a “kick in the stomach” whenever there is a death that could be tied to domestic violence.

She said it is important for domestic violence survivors to know that resources are available 24/7.

“Sometimes it takes a minute to want to get help,” she said.

“No one has to do this alone.”