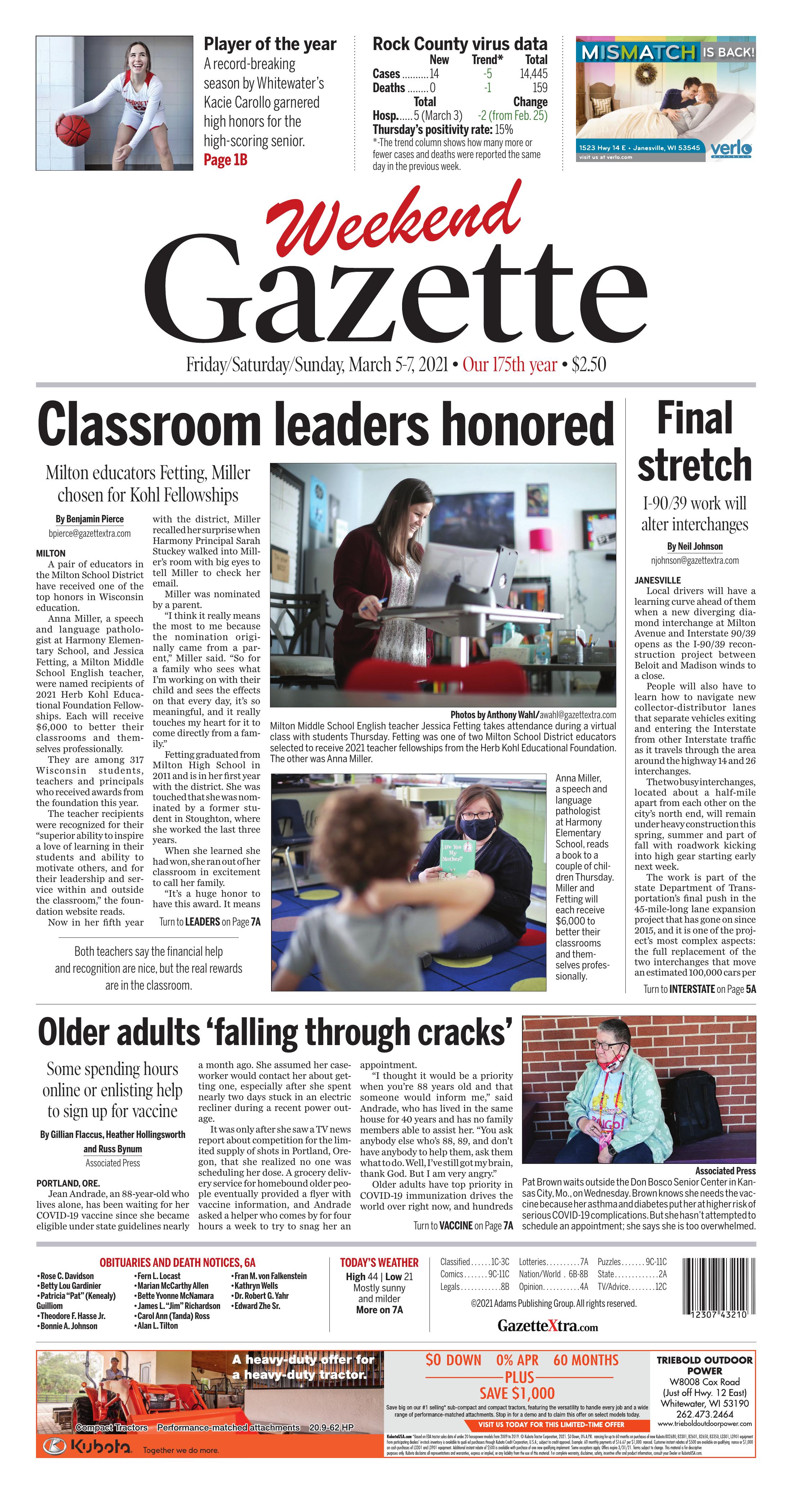 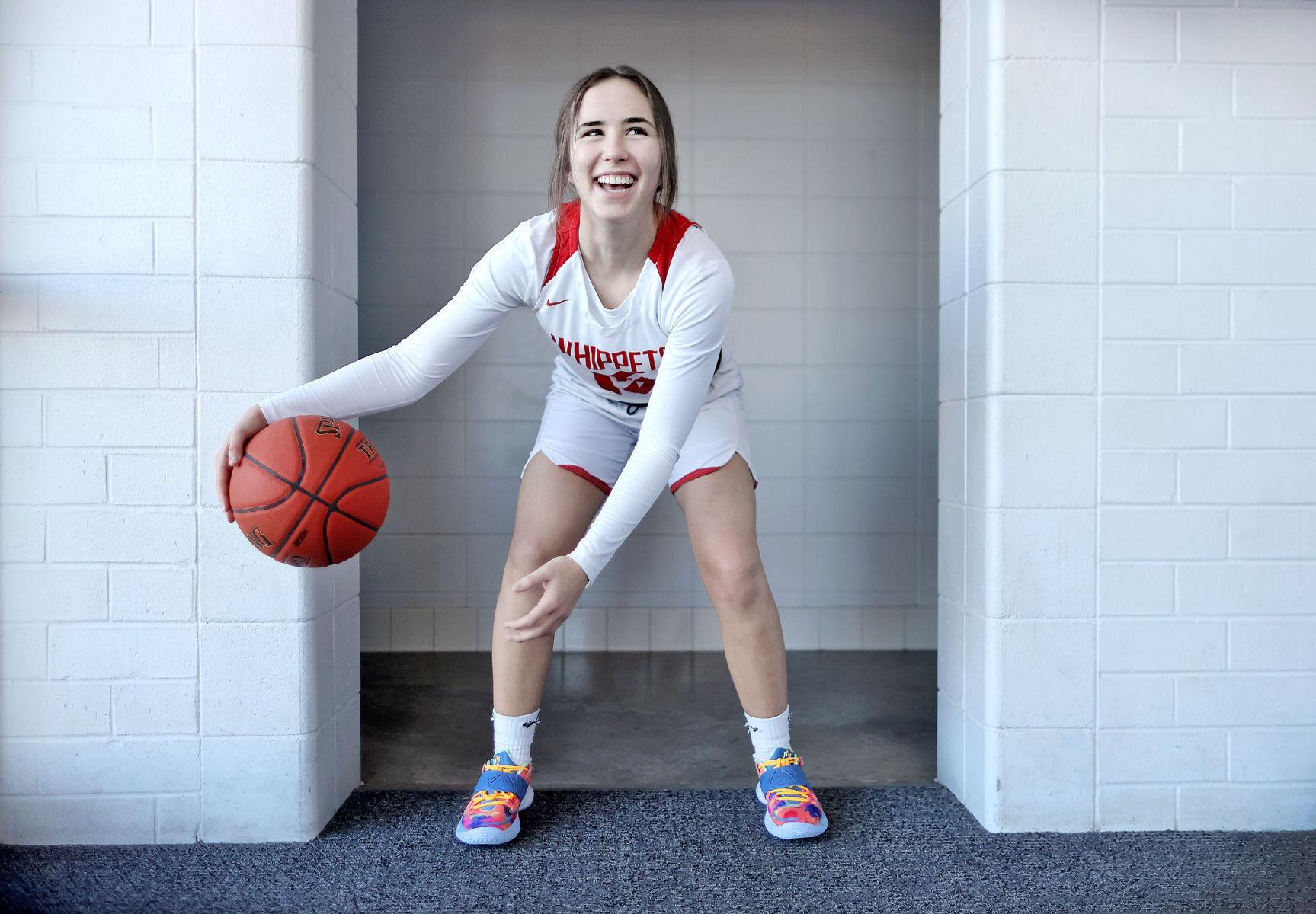 Milton Middle School English teacher Jessica Fetting takes attendance during a virtual class with students Thursday. Fetting was one of two Milton School District educators selected to receive 2021 teacher fellowships from the Herb Kohl Educational Foundation. The other was Anna Miller, a speech and language pathologist at Harmony Elementary School.

Anna Miller, a speech and language pathologist at Harmony Elementary School, was one of two Milton School District educators selected to receive 2021 teacher fellowships from the Herb Kohl Educational Foundation.

A pair of educators in the Milton School District have received one of the top honors in Wisconsin education.

Anna Miller, a speech and language pathologist at Harmony Elementary School, and Jessica Fetting, a Milton Middle School English teacher, were named recipients of 2021 Herb Kohl Educational Foundation Fellowships. Each will receive $6,000 to better their classrooms and themselves professionally.

They are among 317 Wisconsin students, teachers and principals who received awards from the foundation this year.

The teacher recipients were recognized for their “superior ability to inspire a love of learning in their students and ability to motivate others, and for their leadership and service within and outside the classroom,” the foundation website reads.

Now in her fifth year with the district, Miller recalled her surprise when Harmony Principal Sarah Stuckey walked into Miller’s room with big eyes to tell Miller to check her email.

Miller was nominated by a parent.

“I think it really means the most to me because the nomination originally came from a parent,” Miller said. “So for a family who sees what I’m working on with their child and sees the effects on that every day, it’s so meaningful, and it really touches my heart for it to come directly from a family.”

Fetting graduated from Milton High School in 2011 and is in her first year with the district. She was touched that she was nominated by a former student in Stoughton, where she worked the last three years.

When she learned she had won, she ran out of her classroom in excitement to call her family.

“It’s a huge honor to have this award. It means that I’m making an impact, making a difference,” Fetting said. “Just having that recognition for this prestigious award, it was very honorable. It’s also been a tough year, so this was just kind of a bright light.”

Miller works with all Harmony students and runs the district’s preschool speech and language play group. The group of 3- to 4-year-olds spends an hour at school once or twice a week to play games and work on their speech and language skills through books, music, movement and playtime. 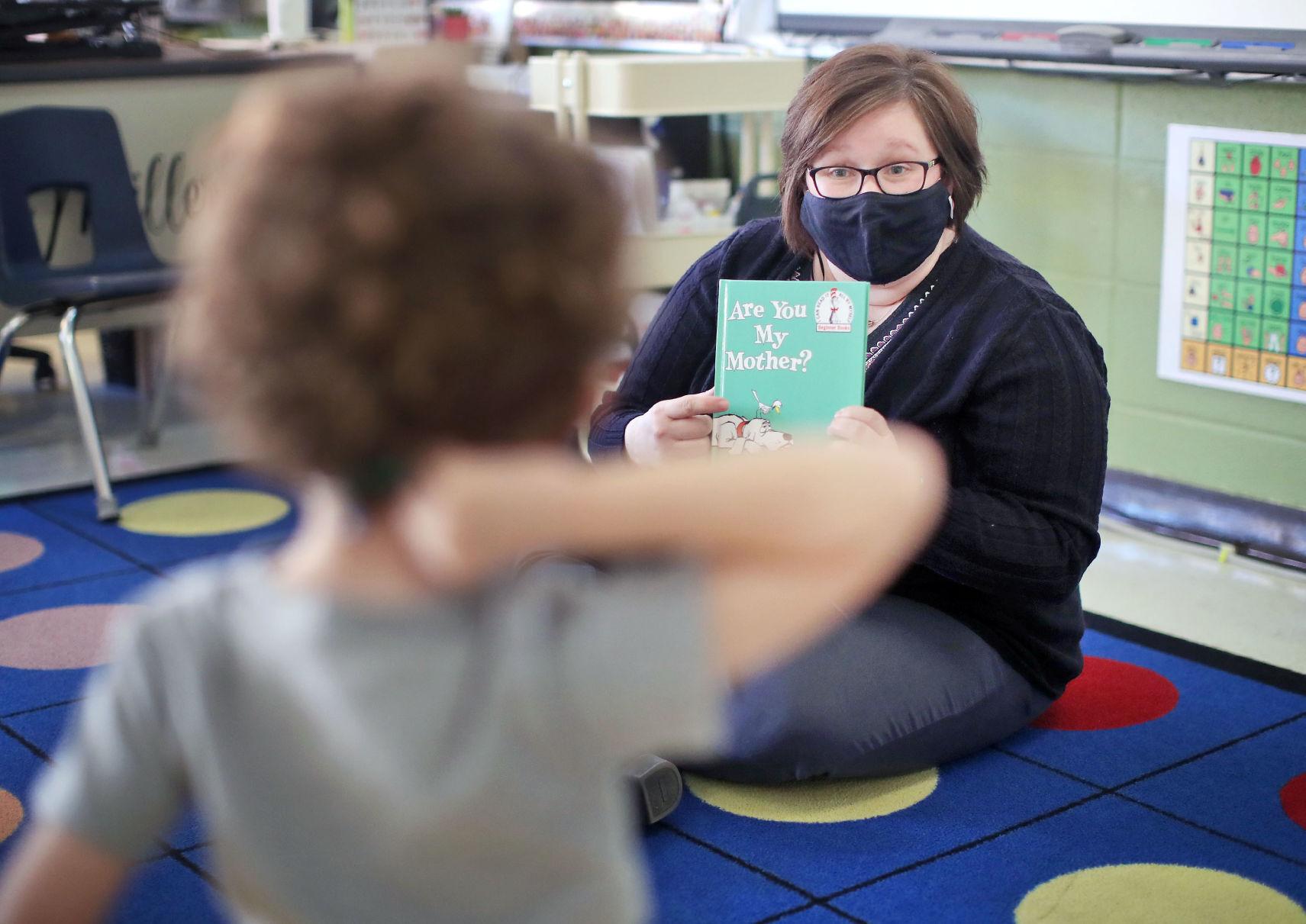 Anna Miller, a speech and language pathologist at Harmony Elementary School in Janesville, reads a book to a couple of children Thursday. Miller was one of two Milton School District educators who received 2021 teacher fellowships from the Herb Kohl Educational Foundation.

Miller decided to focus on speech pathology after working at a parochial school on an Apache reservation in Arizona. If students there needed extra help, they had to attend a different school. After marriage and kids, Miller decided she wanted to help those kinds of kids.

Fetting teaches English to eighth-graders at Milton Middle School. She said watching a struggling student find a passion for reading is her favorite part of the job.

She said much of her award will be used to buy books for her classroom collection.

Fetting knew from a young age that she wanted to be a teacher. Her mother, Jeanne Hergert, retired after 29 years in the district.

“This was always my dream job ever since I can remember. Growing up, I’ve always wanted to be a teacher, and the biggest goal was always to be in Milton,” Fetting said. “So being back here as a Red Hawk has just been my dream.”

For her part, Miller hopes to use the fellowship money to update classroom technology and build more resources so more families can access speech tools from their homes.

“Especially with technological materials and tools that we want to make more available for the families, going virtual really highlighted that it’s not easy for every family to get their hands on the technology that’s needed,” she said. “So that’s where I’d like to focus.”

Both teachers say the financial help and recognition are nice, but the real rewards are in the classroom. 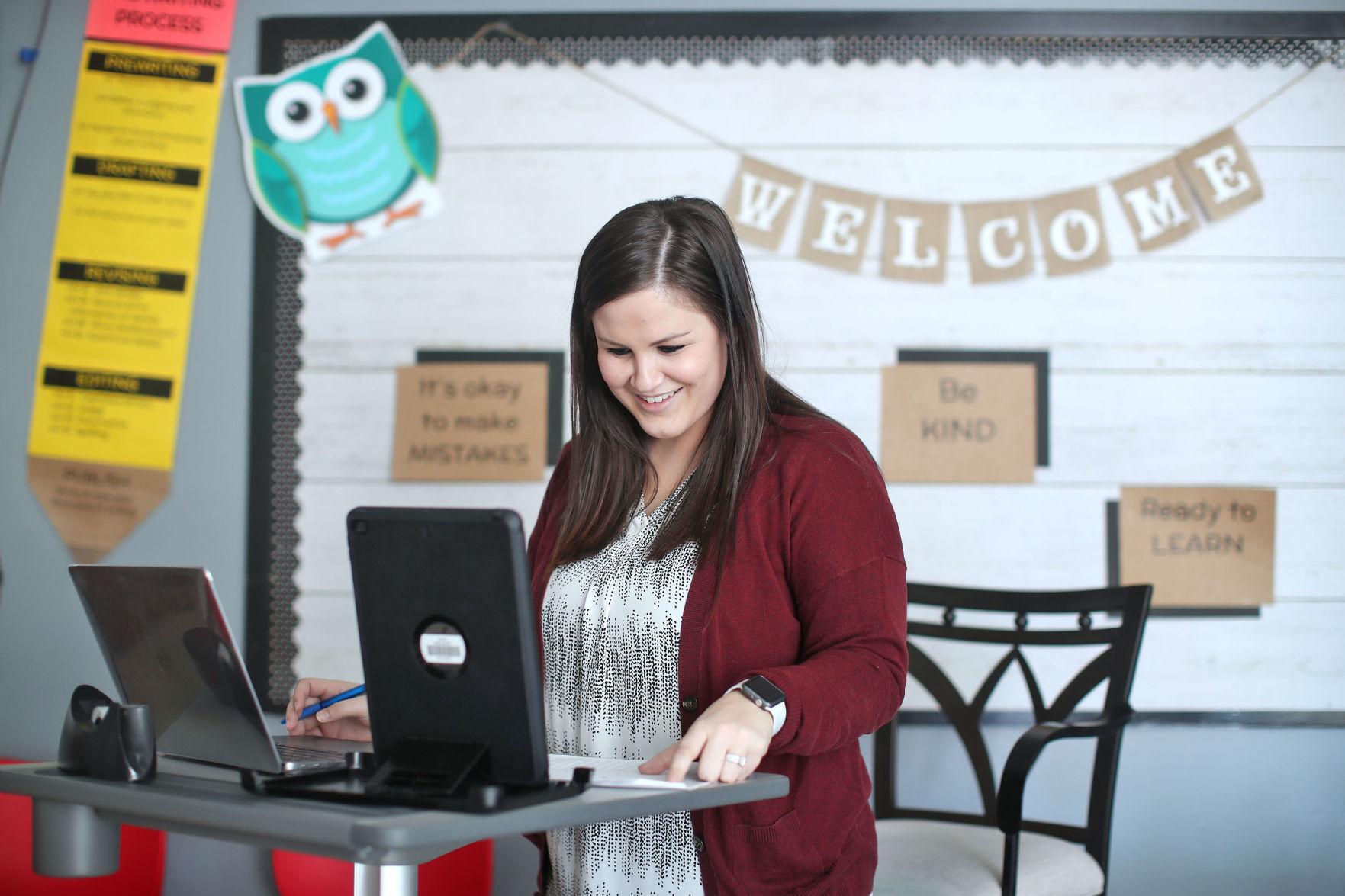 “The student (who nominated Fetting) and I were very close, and she and I worked together to help her overcome a lot of challenges,” Fetting said. “And just that process means more to me than this award, and seeing her come out of everything on top and overcoming things was the coolest part.”

“The kids really are the best,” she said.

“You don’t get through a day without lots of smiles, and there’s just nothing quite like watching these little guys do something that they didn’t know they could do for the very first time.”

Obituaries and death notices for March 5, 2021

Local drivers will have a learning curve ahead of them when a new diverging diamond interchange at Milton Avenue and Interstate 90/39 opens as the I-90/39 reconstruction project between Beloit and Madison winds to a close.

People will also have to learn how to navigate new collector-distributor lanes that separate vehicles exiting and entering the Interstate from other Interstate traffic as it travels through the area around the highway 14 and 26 interchanges.

The two busy interchanges, located about a half-mile apart from each other on the city’s north end, will remain under heavy construction this spring, summer and part of fall with roadwork kicking into high gear starting early next week.

The work is part of the state Department of Transportation’s final push in the 45-mile-long lane expansion project that has gone on since 2015, and it is one of the project’s most complex aspects: the full replacement of the two interchanges that move an estimated 100,000 cars per day along I-90/39, Humes Road and Milton Avenue.

DOT Regional Communications Manager Steve Theisen said the Interstate and both interchanges are in line to reopen with a new configuration by mid-September. It will be the first time local drivers and commuters have seen the big highway fully open to traffic since work started.

But before that, motorists will once more run through a gantlet of roadwork along the heavily traveled nexus of roads. The work will require navigating unusual traffic patterns along Milton Avenue and, at times, on and off the Interstate at the two interchanges.

Starting Tuesday morning, people traveling along Highway 26 near the I-90/39 interchange should be ready for this monthslong change: The DOT plans to shift all Highway 26 traffic near the interchange to the northbound lanes of the highway.

Theisen said the shift will allow crews to begin work on new southbound lanes that will be part of the diverging diamond. That change will run through the end of June; at the end of July, Theisen said the DOT will shift Highway 26 traffic into the southbound lanes to do “mirror image” work on the northbound lanes. That shift will run through part of September, at which point the DOT is targeting completion of the Highway 26 interchange.

The end result will be a crossover traffic pattern similar to the diverging diamond design used at Highway 11’s junction with the Interstate on Janesville’s south end.

The DOT is implementing the diverging diamond because agency studies show the configuration improves traffic safety at interchanges that historically have a heavy volume of left-hand turns across traffic.

This spring and summer, the DOT plans to give advanced notice to motorists of temporary closures of ramps at Highway 26 as the interchange rebuild rolls out. One exit ramp closure has been ongoing and remains in effect.

Theisen said the southbound ramp off Highway 26 to the I-90/39 interchange, an exit that has been closed since August 2020, will remain closed until the end of August this year.

Another ramp at the same interchange, the northbound exit ramp to I-90/39, will close for about two weeks this summer.

That is in addition to the south exit ramp off I-90/39 onto Highway 26, which will see partial closure for six weeks.

During that closure, Theisen said, people will still be able to exit and head south onto Milton Avenue toward downtown Janesville, but they won’t be able to turn north on Highway 26 toward Milton.

Theisen said the DOT will announce all those closures ahead of time, and he said the DOT also will use marquee signs along the Interstate and Highway 26/Milton Avenue to help guide travelers through the construction zone.