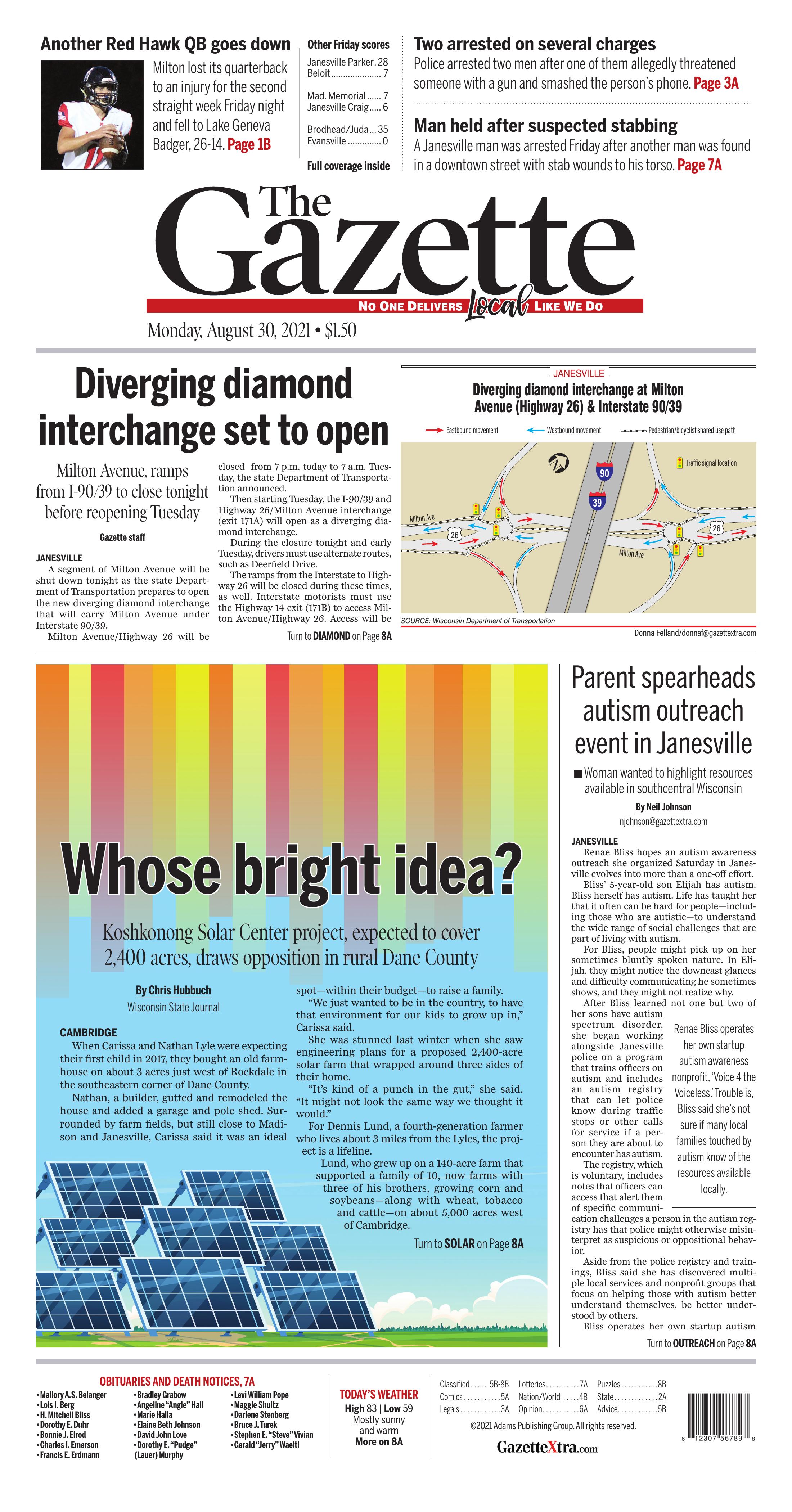 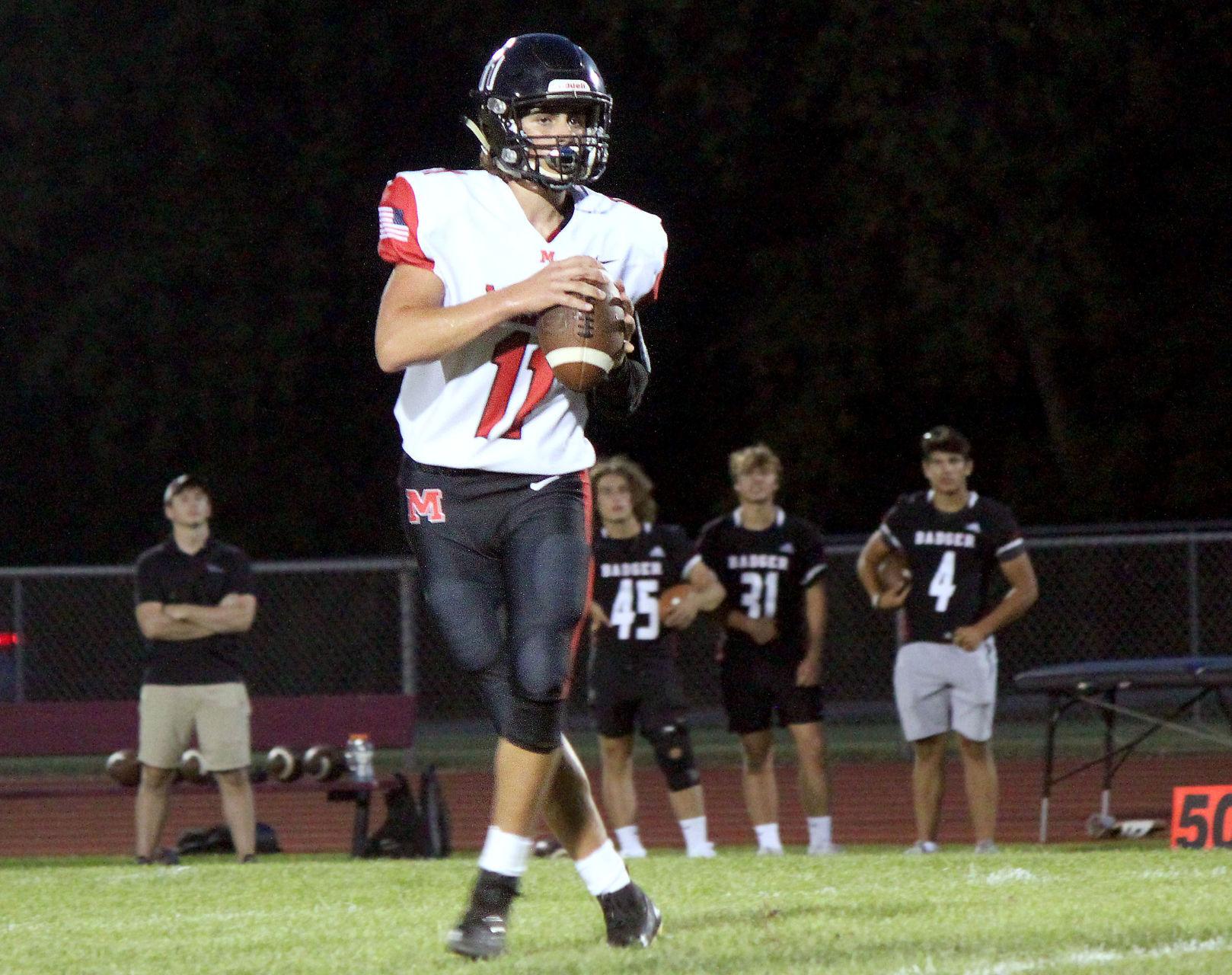 Milton sophomore quarterback Terrell Fischer drops back against Lake Geneva Badger on Friday. Fischer, a sophomore, is learning on the job after the Red Hawks lost their top two starting QBs.

Renae Bliss hopes an autism awareness outreach she organized Saturday in Janesville evolves into more than a one-off effort.

Bliss’ 5-year-old son Elijah has autism. Bliss herself has autism. Life has taught her that it often can be hard for people—including those who are autistic—to understand the wide range of social challenges that are part of living with autism.

For Bliss, people might pick up on her sometimes bluntly spoken nature. In Elijah, they might notice the downcast glances and difficulty communicating he sometimes shows, and they might not realize why.

After Bliss learned not one but two of her sons have autism spectrum disorder, she began working alongside Janesville police on a program that trains officers on autism and includes an autism registry that can let police know during traffic stops or other calls for service if a person they are about to encounter has autism.

The registry, which is voluntary, includes notes that officers can access that alert them of specific communication challenges a person in the autism registry has that police might otherwise misinterpret as suspicious or oppositional behavior.

Aside from the police registry and trainings, Bliss said she has discovered multiple local services and nonprofit groups that focus on helping those with autism better understand themselves, be better understood by others.

Trouble is, Bliss said she’s not sure if many local families touched by autism know of the resources available locally.

“I went to (Janesville Police) Chief (Dave Moore) and I said, ‘Look, we’ve got to do something.’ I said, ‘These families need to know what is here because a lot of them have just gotten a diagnosis or their family members just got diagnosed, and they have no idea that we’ve got so many local groups and these supports,’” Bliss said.

To that end, Bliss, the Janesville police, Rock County Human Services and a half-dozen area nonprofits that work with autistic clients held an autism community event at Fourth Ward Park in Janesville on Saturday.

One of the groups on hand Saturday was the Autism Society of South Central Wisconsin, a resource group based in Madison that runs a volunteer chapter in Janesville, the Janesville AUsome Social Group.

The group hosts outdoor activities that allow people with autism to meet and mingle. At 1 p.m. Sept. 18, the group is holding a walk along the Ice Age Trail. The group will hike from the Dawson Ball Fields off Beloit Avenue and observe pelicans and an eagle nest along the Rock River.

Nancy Alar, the local autism society’s president, said the group’s social events, including monthly game nights now being held virtually, have been a godsend for some locals with autism who might otherwise struggle in common social settings.

“People don’t have to worry about being judged or masking their disability,” Alar said. “And we don’t require an autism diagnosis. We don’t check you for your ‘autism card’ at the door.”

Bliss said she has lived with autism—specifically, Asperger’s Syndrome—her whole life, although she wasn’t diagnosed with the disorder until well into her adulthood.

She faces different challenges than her son Elijah, who she said is nonverbal. He can feel timid or overwhelmed around loud or commanding people.

Bliss said she remembers the first time a police officer pulled over her car. She was a teenager, and it was the mid-1990s. The encounter didn’t go well.

Some people with autism can find it difficult to make direct eye contact with people, but when Bliss gets nervous, she says she can sometimes feel herself become agitated or defensive.

That’s one part of autism spectrum disorder that Bliss always will live with, but it’s behavior she said police might find off-putting during a traffic stop.

Bliss thinks her first traffic stop would have gone better if both she and the officer who stopped her had understood her autism and the effects the disorder can have on communication.

She said Janesville police’s involvement in the training and the voluntary registry is one piece of the puzzle to creating more local awareness that people with autism are just as diverse as anybody else.

Bliss doesn’t like metaphors about missing puzzle pieces, though. She prefers the butterfly as an image to depict the nature of autism.

“A butterfly is more universal than saying, ‘Eh, that person with autism is missing a few puzzle pieces,’” Bliss said. “Quite frankly, the process of how a butterfly is graded and how it is seen as being free and an individual, that’s also how a lot of autistic kids can find their own greatness.”