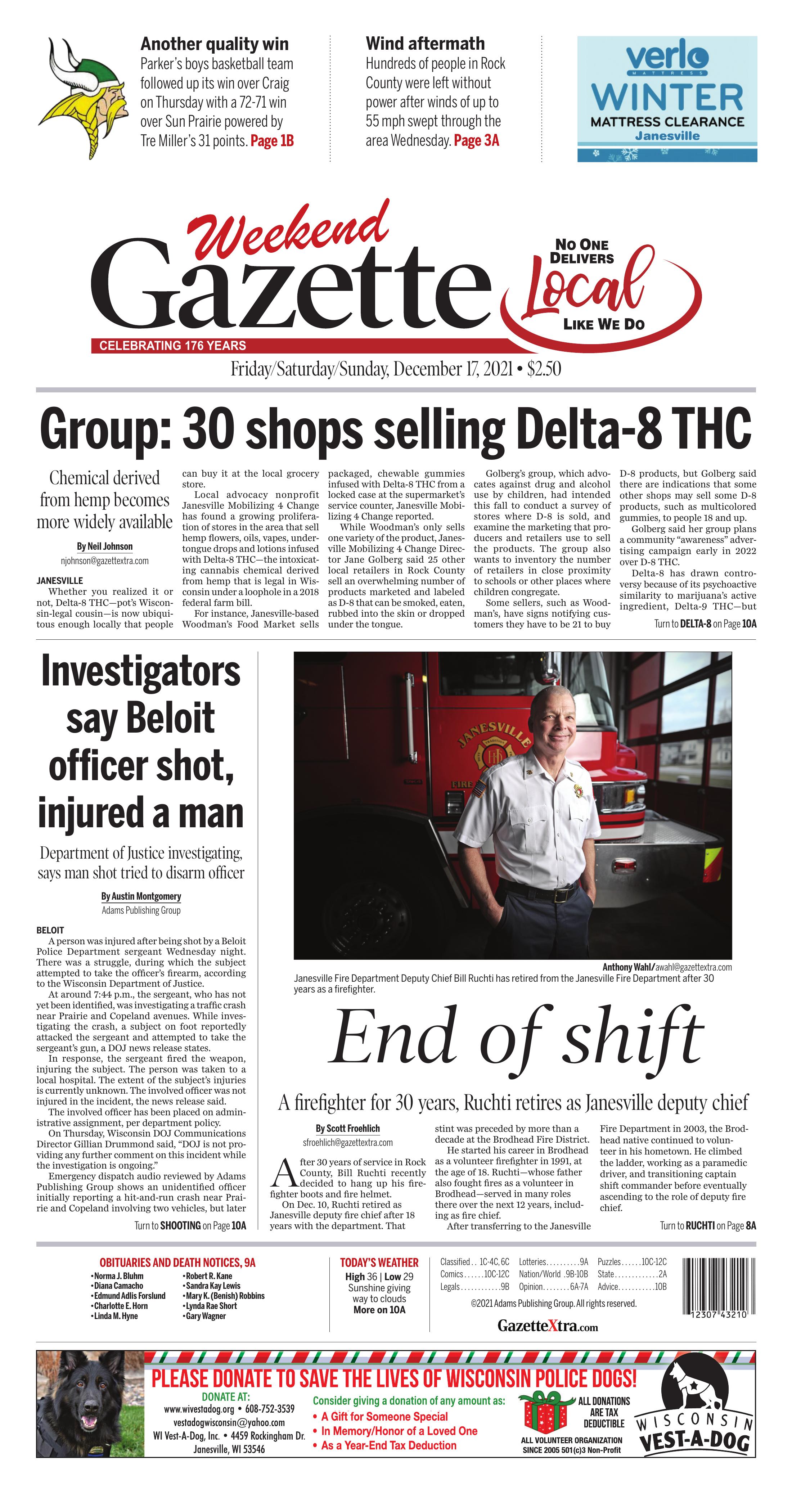 A selection of Delta-8 and Delta-10 THC cannabis products on display on the lower shelves at Smoker’s World appear packaged with cribbed images of trademarked candy and breakfast cereal brands such as Starburst, Jolly Ranchers and Cookie Crisp. Sellers say the products are tested. Local youth advocates worry that more than two-dozen local stores now sell legal, intoxicating cannabis products, some of which might be attractive to children.

Whether you realized it or not, Delta-8 THC—pot’s Wisconsin-legal cousin—is now ubiquitous enough locally that people can buy it at the local grocery store.

While Woodman’s only sells one variety of the product, Janesville Mobilizing 4 Change Director Jane Golberg said 25 other local retailers in Rock County sell an overwhelming number of products marketed and labeled as D-8 that can be smoked, eaten, rubbed into the skin or dropped under the tongue.

Golberg’s group, which advocates against drug and alcohol use by children, had intended this fall to conduct a survey of stores where D-8 is sold, and examine the marketing that producers and retailers use to sell the products. The group also wants to inventory the number of retailers in close proximity to schools or other places where children congregate.

Some sellers, such as Woodman’s, have signs notifying customers they have to be 21 to buy D-8 products, but Golberg said there are indications that some other shops may sell some D-8 products, such as multicolored gummies, to people 18 and up.

Delta-8 has drawn controversy because of its psychoactive similarity to marijuana’s active ingredient, Delta-9 THC—but also because of questions over lax regulation and scant product information on the packaging that explains to consumers what chemicals the producers used to refine their products.

“We just know that these products are popping up all over the place. So we want the public to be aware of it,” Golberg said. “Basically, when we’ve done this presentation to small groups, parent-teacher groups, we find out they’d been unaware. People’s mouths just drop open. They can’t believe that this is legal in Wisconsin, because they’re under the impression that marijuana isn’t legal, so how can this be legal?”

“They’re just surprised that this product even exists, first of all, and second of all, that it is so easily accessible.”

Cannabidiol, or CBD, is a legal extract of hemp plants that is sold for its supposed medicinal properties that include relieving pain.

Both CBD and Delta-8 THC are derived from hemp, which is why they are legal. But CBD is not psychoactive; it causes no high in users. Producers and retailers say D-8 can pack a buzz similar to regular pot, although dosage and a user’s experience with THC also are factors in how the drug can affect them.

Delta-9 THC—a similar psychoactive substance that is in abundance in hemp’s cousin, marijuana—remains a controlled substance in Wisconsin and many other states.

Golberg said her group and another countywide anti-drug coalition learned that a group of Evansville teens had bought edible, Delta-8 THC gummy products, and the products reportedly contained some amount of fentanyl—a potent and dangerous opioid and a federal controlled substance, Golberg said.

That prompted Janesville Mobilizing 4 Change to buy space on billboards that question whether people are aware of what’s in THC edibles they’re consuming.

A Rock County Sheriff’s officer who is on Janesville Mobilizing 4 Change’s board and police officials in Evansville did not respond to Gazette inquiries about the possible opioid-laced THC products.

Earlier this year, a few local residents were hospitalized after they’d become ill from consuming edible THC gummies reportedly given to them as free samples at Hemp 1848, a CBD and D-8 retailer that operates at Uptown Janesville and at a storefront in Janesville’s downtown.

Hemp 1848 told The Gazette they have testing information on all their products, and they’ve since warned customers not to ingest too much D-8 THC because it can cause nausea, faintness and other unpleasant side effects.

Vicki Solomon-McClain, who operates Hemp Hut, a CBD and Delta-8 retail shop on Milton Avenue said she resents “backlash” she’s had at her own shop following people getting ill from products sold at other local hemp shops and the local billboards that insinuate unnamed hemp shops sell products that possibly are laced with dangerous opioid drugs.

“I had people come in and say to me, ‘Now, you don’t have that D-8 stuff, do you? D-8’s not in this CBD, right? Because that stuff, that was just in the papers, on the front page [about] some people getting sick and hospitalized.’”

“I had to sit there and say, ‘No. That was not Delta-8 from this location. I have nothing to do with that seller.’ You know, I’m trying to separate myself from them,” Solomon-McClain said.

Solomon-McClain showed a Gazette reporter a QR code on a few D-8 product packages. The QR code on one THC oil product gave access to ingredients and potency for the product, but the code on another product’s package simply provided legal disclaimers for use of the product and no other information.

Solomon-McClain laid the product aside to check with the manufacturer later, which she said she does if a customer is unable to access product information. She said she keeps on file hard copies of laboratory testing documents for most products she carries.

A Smoker’s World manager who identified himself as Orion Cooper told a Gazette reporter on Tuesday that he asks for the ID of everyone who seeks to buy THC products. Cooper said he won’t sell D-8 THC products to anyone underage.

On the lower shelves of the store’s main display counters, Smoker’s World had stocked a wide array of THC products, some packaged with cribbed images of trademarked candy and breakfast cereal brands, such as Starburst, Jolly Ranchers and Cookie Crisp.

Cooper said the products “don’t taste like breakfast cereal or candy as much as you’d think.” Rather, he said, the packaging is simply marketing to entice buyers.

When asked why those candy-like cannabis products are displayed at knee-level, where young people might more easily notice them, Cooper sidestepped the question.

This story has been altered from an earlier version to clarify that local, nonprofit youth advocates believe a group of Evansville teens had obtained Delta-8 THC products in late summer that reportedly were determined to be laced with fentanyl, a potent opioid used to treat pain. It's not clear where the teens obtained the products.

Janesville Fire Department Deputy Chief Bill Ruchti has retired from the department after 40 years as a firefighter.

After 40 years of service in Rock County, Bill Ruchti recently decided to hang up his firefighter boots and fire helmet.

On Dec. 10, Ruchti retired as Janesville deputy fire chief after 30 years with the department. That stint was preceded by more than a decade at the Brodhead Fire District.

After joined the Janesville Fire Department in 1991, the Brodhead native continued to volunteer in his hometown. He climbed the ladder, working as a paramedic driver, and transitioning captain shift commander before eventually ascending to the role of deputy fire chief.

Ruchti said he encountered a multitude of changes to the profession, especially once he came to Janesville. From enhancements in fire engines to advancement in CPR technology, Ruchti saw the work become more efficient, resulting in safer communities.

Ruchti was also a member of newly created hazmat, dive and technical rescue teams, over the time he spent serving in Janesville.

“I’m proud of how the department continues to evolve and meet the needs of the community with what resources we’re given,” he said.

Ruchti said he decided to retire because he felt his career had run its course. Prior to retiring, at age 59, he was the oldest firefighter at the Janesville Fire Department. He said he considers himself fortunate to have served for so long in a job he loves.

He said he leaves behind a staff of dedicated and caring professionals; a group he considers his second family.

Ruchti said he is looking forward to traveling and attending to projects he put off over the years. In the near future, he said he looks forward to spending time with his family, including his recently retired wife, and a new grandson due at the end of the month.

“If I really get bored, there’s all kinds of opportunities out there. But for now we’ll take it easy for a little while,” Ruchti said.

This story was corrected to note Ruchti's first year as a firefighter, as well as clarifying the time he spent at the Janesville Fire Department.

A person was injured after being shot by a Beloit Police Department sergeant Wednesday night. There was a struggle, during which the subject attempted to take the officer’s firearm, according to the Wisconsin Department of Justice.

At around 7:44 p.m., the sergeant, who has not yet been identified, was investigating a traffic crash near Prairie and Copeland avenues. While investigating the crash, a subject on foot reportedly attacked the sergeant and attempted to take the sergeant’s gun, a DOJ news release states.

In response, the sergeant fired the weapon, injuring the subject. The person was taken to a local hospital. The extent of the subject’s injuries is currently unknown. The involved officer was not injured in the incident, the news release said.

The involved officer has been placed on administrative assignment, per department policy.

On Thursday, Wisconsin DOJ Communications Director Gillian Drummond said, “DOJ is not providing any further comment on this incident while the investigation is ongoing.”

The officer told dispatch a suspect, identified as a Hispanic male wearing a blue shirt and tan pants, “rammed his body into the side of a car as it was slowing down.” The officer also reported that the man appeared to be “having some mental health issue,” and requested backup.

The officer later said they would make contact with the man again while at Crescent and Prairie. There was then a period of radio silence before an officer reports to dispatch “shot fired, one down. I am OK. Stage an ambulance. Close off Prairie at Copeland.”

Following the shooting, other Beloit officers secured the parameter and emergency medical staff from the Beloit Fire Department were on the scene. An unidentified first responder stated over dispatch that the person who was shot had a tourniquet applied to their right arm.

The DCI is reviewing evidence in the case and will turn over investigative reports to the Rock County District Attorney when the investigation ends.

The last officer-involved shooting in Beloit occurred on Dec. 10, 2019, when a 23-year-old Beloit man was shot after a police pursuit in the 1800 block of Harrison Avenue. Montay S. Penning, 23, died as a result of injuries sustained in the shooting.

Penning was found to have pointed an unloaded handgun at Beloit police during a foot pursuit following a report of a stolen vehicle and shots fired in Beloit.

The three officers involved in the incident were cleared of any wrongdoing and the shooting was ruled to have been justified by the Rock County District Attorney’s Office.

This story will be updated as more information becomes available.