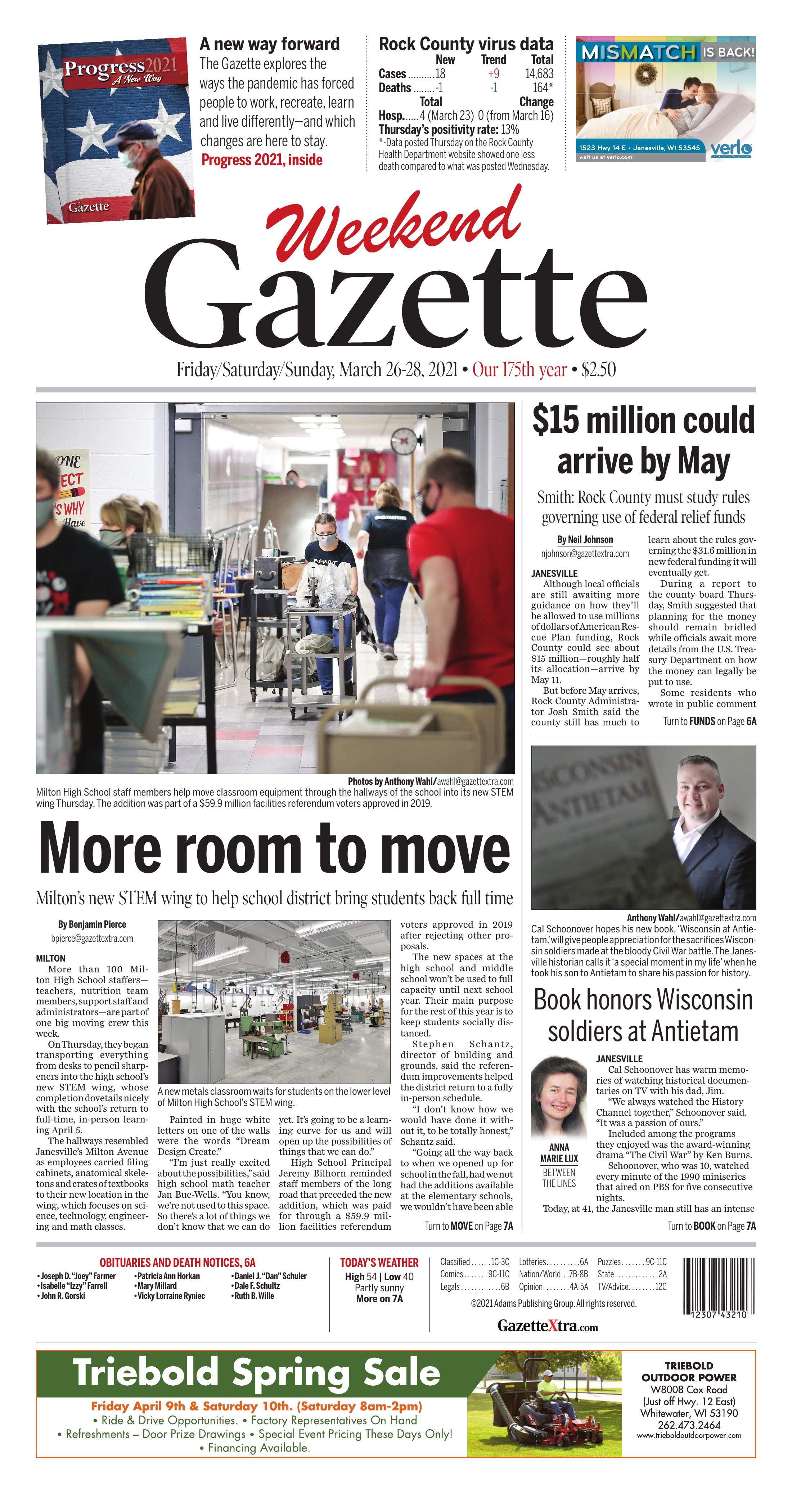 Milton High School staff members help move classroom equipment through the hallways of the school into their new STEM wing Thursday. The addition was part of a $59.9 million facilities referendum voters approved in 2019.

Milton High School science teacher Devon Hammer moves a cart of items from her old classroom into her new one in the school’s recently finished STEM wing.

Sarah Harvatine tries to reattach the top of an anatomical skeleton’s skull after it fell off while she transported it to Milton High School’s new STEM wing Thursday.

On Thursday, they began transporting everything from desks to pencil sharpeners into the high school’s new STEM wing, whose completion dovetails nicely with the school’s return to full-time, in-person learning April 5.

The hallways resembled Janesville’s Milton Avenue as employees carried filing cabinets, anatomical skeletons and crates of textbooks to their new location in the wing, which focuses on science, technology, engineering and math classes.

Painted in huge white letters on one of the walls were the words “Dream Design Create.” 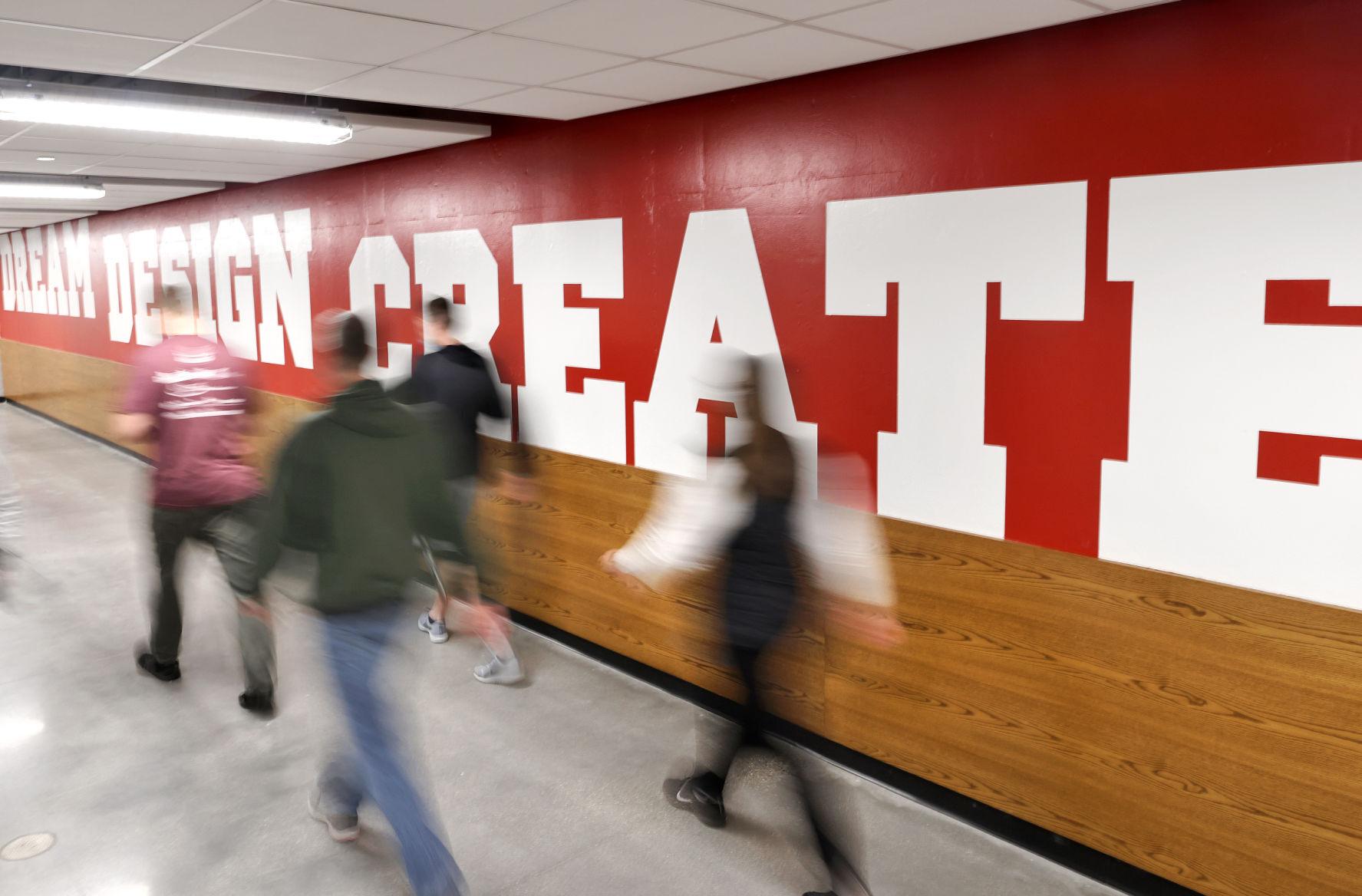 High School Principal Jeremy Bilhorn reminded staff members of the long road that preceded the new addition, which was paid for through a $59.9 million facilities referendum voters approved in 2019 after rejecting other proposals.

The new spaces at the high school and middle school won’t be used to full capacity until next school year. Their main purpose for the rest of this year is to keep students socially distanced.

Stephen Schantz, director of building and grounds, said the referendum improvements helped the district return to a fully in-person schedule.

“I don’t know how we would have done it without it, to be totally honest,” Schantz said.

“Going all the way back to when we opened up for school in the fall, had we not had the additions available at the elementary schools, we wouldn’t have been able to space kids out like we were able to do there. And now having these spaces open up at the exact time we’re going to have kids come back here is great.”

The lunchroom has required the most creativity, he said.

A traditional lunch table that used to seat 12 students now seats a socially distanced two. Students also are eating lunch in desks in the gym and hallways.

Superintendent Rich Dahman said the best educational model for most students is face to face with their peers. The district wants to balance safety with quality education, and this seemed like the right time to have students return, he said. 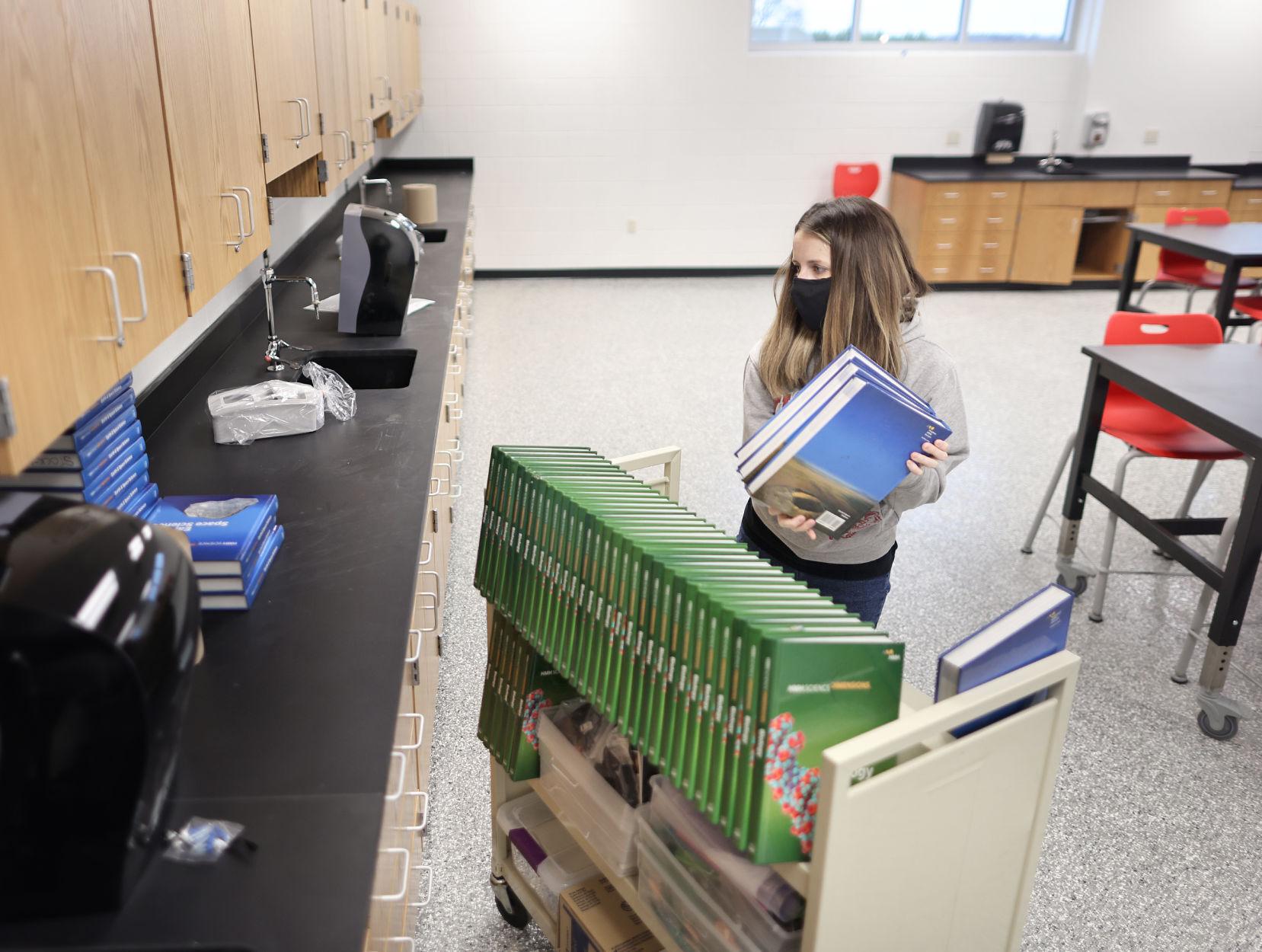 “It’s really huge,” Dahman said of the role of the new improvements in the scheduling.

About 75% of high school students and about 80% of middle schoolers will be in person April 5. Masks will still be required, and social distancing will be enforced wherever possible.

“I think it’s an important message that we aren’t throwing our doors wide open,” Dahman said. “We’re continuing to be diligent about protecting our own safety and the safety of others.”

The excitement over in-person learning in a new space has energized Bilhorn and his staff. Meanwhile, students are reimagining homecoming and a fuller high school experience this spring.

“I’ve always been striving to get students to take a problem and design a solution, based on looking at the criteria of what are you trying to meet? What is the goal?” science teacher Tara Ferron said.

“And there’s so many spaces here where students can test how things fall with height. Or with my biomedical students, we do labs with pill design, and being able to go out in these spaces or collaborate with other content areas. ... That’s so much easier when we have it like this.”

The high school still has areas where social distancing is difficult, and COVID-19 still could pose problems before the school year ends. But Bilhorn feels good about having students back fully in person.

“Obviously, there’s some hesitation on can we or should we be doing this,” he said. “But there is an excitement about getting these kids back. ... We need to teach kids how to be part of a student body again. There’s an excitement in the high school. There’s a buzz with that. And I’m excited to get that going again.”

Obituaries and death notices for March 26, 2021

Local
Rock County could see $15 million in rescue funds by May, half its total allotment
Dan Lassiter

Although local officials are still awaiting more guidance on how they’ll be allowed to use millions of dollars of American Rescue Plan funding, Rock County could see about $15 million—roughly half its allocation—arrive by May 11.

But before May arrives, Rock County Administrator Josh Smith said the county still has much to learn about the rules governing the $31.6 million in new federal funding it will eventually get.

During a report to the county board Thursday, Smith suggested that planning for the money should remain bridled while officials await more details from the U.S. Treasury Department on how the money can legally be put to use.

Some residents who wrote in public comment to the board Thursday urged for transparency, oversight and clear priorities in how the county directs the millions in funding—comments that Smith told the board are “very good words.”

The board did not discuss how the county could oversee the allocated funds, but a handful of county residents in letters to the board pressed officials to consider setting up or electing an independent oversight committee to shepherd the use of the funds.

Mark Warren of Janesville wrote to the county that he thinks there should be a review board of mostly “nonelected” officials who he suggested could be business operators and “at-large” residents. He and others who wrote to the board suggested that would create more transparency and help separate politics from decisions on how to use the funding.

Smith said he expects more detailed guidelines from the federal government in the coming days. The board did not discuss any specific programs that might draw from the massive funding program.

Despite that, Smith did offer some early thoughts on how the county could view the funding’s intended purposes.

Smith explained to the board that federal rules tied to the American Rescue Plan allow the funding to be used to directly respond to the negative public health and economic impacts of the ongoing pandemic. That could include spending on equipment and programs tied to a public health response to the pandemic. Or, he said, it could include direct assistance to households, small businesses and nonprofits or aid to affected industries such as tourism and hospitality.

Federal rules also allow the county to reimburse itself for lost revenue. Smith gave a hypothetical example at the Rock County Clerk’s Office. He said that office lost about $60,000 in passport processing fees last year. That shortfall, he said, was tied to the pandemic’s shutdown of most international travel.

The county also can use the funding for “premium pay” for eligible essential county or private sector workers. Smith said that use could be similar to funding used for “hazard pay” through the earlier CARES Act.

He pointed out that some boosts in pay the county already has offered through its own spending, such as at Rock Haven Nursing Home, are ongoing programs. He told the board it will be important to remember there’s a difference between the county budgeting for ongoing expenses and incentive-pay programs that might eventually sunset.

Smith said the county also can use American Rescue Plan funding to pay for some critical infrastructure, including water and sewer service and broadband internet.

He said Rock County is collaborating with municipal leaders in the cities of Janesville and Beloit and the county’s towns to learn how those governments might prioritize spending. He said that could help governments not duplicate spending.

Smith said the county should be “cautious” about using rescue funds to replace operational spending that the county normally covers in its own budget. He said that could create problems in 2025 and beyond when the county would no longer have the federal funds available.

Cal Schoonover hopes his new book, ‘Wisconsin at Antietam,’ will give people appreciation for the sacrifices Wisconsin soldiers made at the bloody Civil War battle. The Janesville historian calls it ‘a special moment in my life’ when he took his son to Antietam to share his passion for history.

Cal Schoonover of Janesville, who grew up watching the History Channel with his dad, hopes his new book will raise awareness of Wisconsin soldiers’ sacrifices at Antietam during the Civil War.

Cal Schoonover has warm memories of watching historical documentaries on TV with his dad, Jim.

“We always watched the History Channel together,” Schoonover said. “It was a passion of ours.”

Included among the programs they enjoyed was the award-winning drama “The Civil War” by Ken Burns.

Schoonover, who was 10, watched every minute of the 1990 miniseries that aired on PBS for five consecutive nights.

Today, at 41, the Janesville man still has an intense interest in history and in the people who made it.

A few years ago, Schoonover visited the Civil War battlefield of Antietam near Sharpsburg, Maryland.

In the course of a single day, some 23,000 men died, were wounded or went missing, making it the bloodiest battle in American history.

As he walked, Schoonover noticed something disturbing.

“There is not one marker that relates to Wisconsin’s role in the battle,” he said. “Wisconsin soldiers played such a crucial role, and they suffered horribly, but they don’t have a lot of recognition.”

Schoonover thought their story needed to be told more clearly than other historians have explained it.

The result is his new book, “Wisconsin at Antietam: The Badger State’s Sacrifice on America’s Bloodiest Day.”

Published by Arcadia Publishing and The History Press, the 127-page book does not cover the entire battle, only the parts fought in by Wisconsin soldiers.

“With the focus normally on Gettysburg by many history buffs from around the world, I thought it best to add a volume to the less-crowded field of the Maryland campaign of 1862,” Schoonover said.

He read old letters and diary entries as well as newspaper accounts and archival material at the Antietam battlefield, the Wisconsin State Historical Society and the Wisconsin Veterans Museum.

“I have lived with the men of the 2nd, 3rd, 6th and 7th Wisconsin,” Schoonover said, explaining how he immersed himself in firsthand accounts and called them “the most important pieces of evidence any historian can find.”

A few soldiers wrote about being shot, crawling to the back of the line and seeing their comrades fall.

“Soldiers were trained to march in a line toward the enemy, fire a round and let the line behind them move forward,” Schoonover said. “The tactics were outdated, and many soldiers were blown away. It was a bloodbath for both sides. There wasn’t much cover to hide, which contributed to the high cost of life.”

People tend to get a lot of information about the Civil War from books.

“But when you actually do the firsthand research, you have a deeper understanding of how the war impacted everyday people,” Schoonover said.

He doesn’t think “we as a society appreciate the sacrifices our guys went through at the time. It was American vs. American.”

Schoonover, who works for the state, has undergraduate and graduate degrees in history and is pursuing a doctorate at Northern Illinois University, also in history.

He hopes to pass on his love of the past to his son, James, who accompanied him to Maryland to do research.

“It was a special moment in my life to take him to the hallowed grounds where so many men fought bravely,” Schoonover said, “and gave their lives.”

Anna Marie Lux is a human interest columnist for The Gazette. Call her with ideas or comments at 608-755-8264 or email amarielux @gazettextra.com.