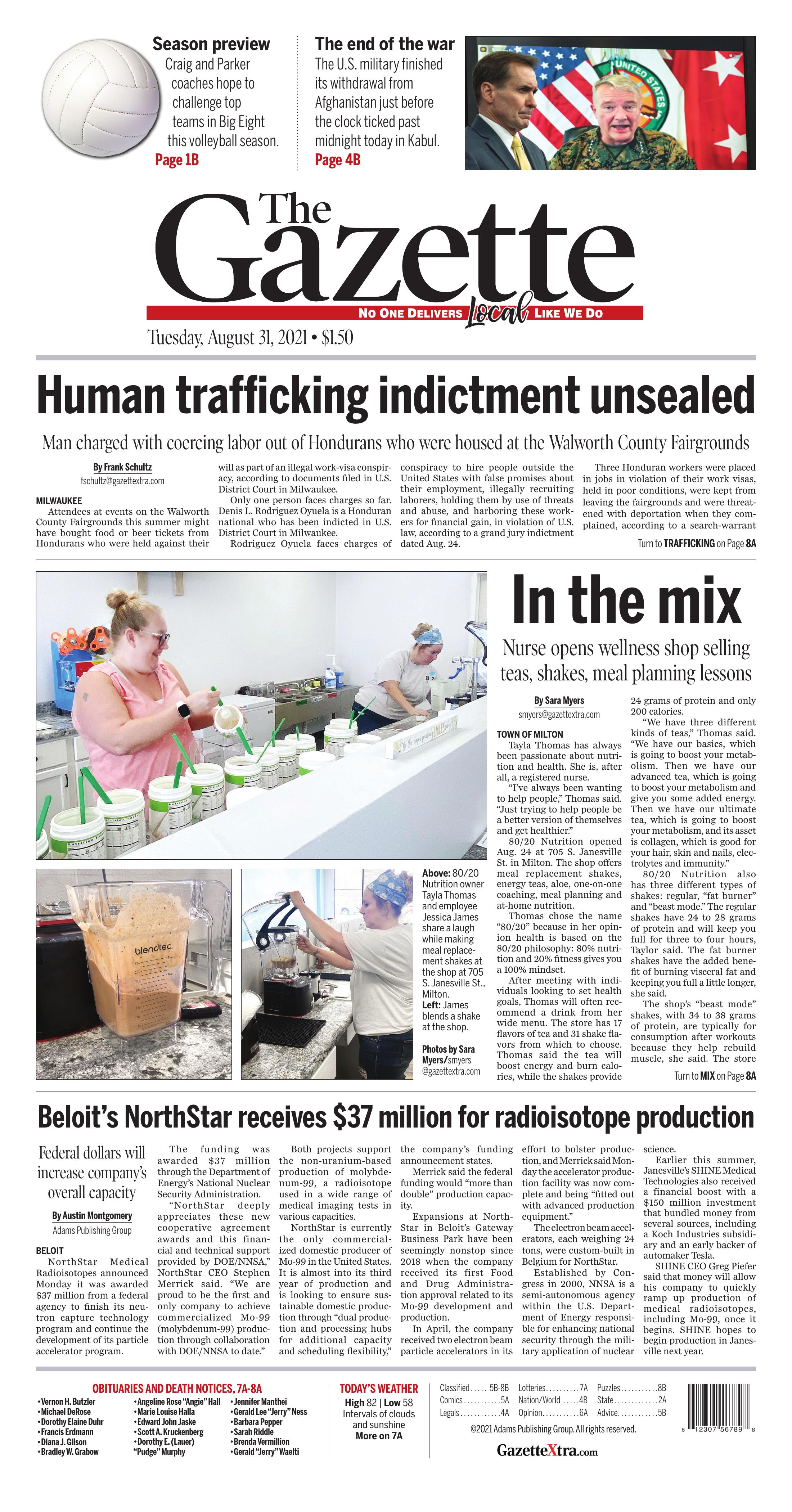 Attendees at events on the Walworth County Fairgrounds this summer might have bought food or beer tickets from Hondurans who were held against their will as part of an illegal work-visa conspiracy, according to documents filed in U.S. District Court in Milwaukee.

Only one person faces charges so far. Denis L. Rodriguez Oyuela is a Honduran national who has been indicted in U.S. District Court in Milwaukee.

Rodriguez Oyuela faces charges of conspiracy to hire people outside the United States with false promises about their employment, illegally recruiting laborers, holding them by use of threats and abuse, and harboring these workers for financial gain, in violation of U.S. law, according to a grand jury indictment dated Aug. 24.

Three Honduran workers were placed in jobs in violation of their work visas, held in poor conditions, were kept from leaving the fairgrounds and were threatened with deportation when they complained, according to a search-warrant affidavit filed by a special agent for the U.S. Department of Labor, who investigated the allegations.

The affidavit indicates the Walworth County Agricultural Society, which runs the fairgrounds, employed the workers.

The Gazette previously reported that the FBI searched the society’s offices on Aug. 11.

Fairgrounds manager Larry Gaffey said at the time that he was glad for the investigation because, “We want to make sure the people we do business with are doing business the right way, too.”

The 45-page affidavit says the investigation started last month and that its targets included “the management and staff of the Walworth County Agricultural Society.” It does not appear any of the staff has been charged.

Gaffey did not return a call on Monday asking for comment.

The affidavit never directly accuses Walworth County Agricultural Society officials of criminal activity, although those involved in transporting and managing the workers are said to have used society facilities.

The agent wrote in the document about the records he was seeking from the society, saying: “I know that enterprises engaged in fraud schemes that are intermingled with legitimate businesses tend to keep detailed, long-term business records for tracking purposes, to satisfy tax reporting and other legal requirements, and to lend an air of legitimacy to their operations.”

Three Hondurans, according to the affidavit, also repaired equipment, shoveled manure, picked up garbage and sprayed chemicals on weeds.

They were paid less than they were promised, they told the investigator, and they had been promised landscaping work in Michigan, not fairgrounds work in Wisconsin.

A worker described being flown with others to Chicago, where they were told to get into a vehicle that took them to the fairgrounds in Elkhorn, where they were assigned to a “cramped” room with bunk beds.

They were told they could not use the shower in the trailer. Rather, they had to use the public restroom and shower trailer about 150 yards away. They could shower only before 7 a.m.

A female “crew boss,” who helped the men fill out paperwork for tax purposes, reportedly told them not to write the Walworth County Agricultural Society address on the forms. When they applied for Social Security cards, they were told to write in an address in Texas.

The Walworth County Fair was not the object of the FBI investigation, but agents sought records from its office, a fair official said.

The address in Texas was for a person apparently involved in the scheme, whose name is one of several in the affidavit that are blacked out.

It’s not clear who the crew boss worked for. She is identified only by a first name. One of the workers said she looked down on him for his dark skin color and often referred to him using derogatory Spanish names for monkeys.

The workers received weekly checks for their work, which they endorsed. An agricultural society worker would take the endorsed checks into the Katzman Administration Building on the fairgrounds and return with envelopes of cash for the same amounts, the workers said.

The workers said when they asked to leave the fairgrounds, their overseers found excuses to keep them there, such as saying they had to work a weekend festival, but then no festival happened.

They were allowed to shop at local Mexican groceries or at Walmart, but they were always watched.

Rodriguez Oyuela also oversaw the workers and would threaten to have them deported if they did not do as they were told, according to a search-warrant affidavit. They were also told, apparently falsely, that they could eventually apply for citizenship.

Rodriguez Oyuela told workers he made $1,000 for every Honduran worker he brought to the U.S., and he kept a ledger with names of more than 30 such persons, according to the affidavit.

Rodriguez Oyuela told workers he intended to move them to other jobs, cutting trees in California and working in a salmon fishery in Alaska.

Another worker said Rodriguez Oyuela told him that the promised landscaping employment in Michigan was with a “ghost” company used to get workers into the United States.

A fourth Honduran mentioned in the same document was also promised work in Michigan but was dropped off at a small Illinois town to work with 34 other foreign workers who were held in a warehouse and worked for a traveling amusements company, according to the affidavit.

The three Hondurans in Elkhorn were once taken to visit the fourth Honduran at the Kane County Fairgrounds in St. Charles, Illinois.

The workers’ complaints led to meetings with their overseers, including one in which a Honduran government official joined the conversation online, telling them they should be grateful they had jobs, the workers said.

The workers eventually called a human trafficking hotline and all four were helped out of their situations by an organization identified as “NGO A.”

The agent wrote that the H-2B visa system has “vulnerabilities” and that he has investigated dozens of defendants who participated in defrauding the system.

“I know that one of the primary factors that facilitates the exploitation of H-2B guest workers is poverty in guest workers’ home countries,” he wrote.

NorthStar Medical Radioisotopes announced Monday it was awarded $37 million from a federal agency to finish its neutron capture technology program and continue the development of its particle accelerator program.

The funding was awarded $37 million through the Department of Energy’s National Nuclear Security Administration.

“NorthStar deeply appreciates these new cooperative agreement awards and this financial and technical support provided by DOE/NNSA,” NorthStar CEO Stephen Merrick said. “We are proud to be the first and only company to achieve commercialized Mo-99 (molybdenum-99) production through collaboration with DOE/NNSA to date.”

Both projects support the non-uranium-based production of molybdenum-99, a radioisotope used in a wide range of medical imaging tests in various capacities.

NorthStar is currently the only commercialized domestic producer of Mo-99 in the United States. It is almost into its third year of production and is looking to ensure sustainable domestic production through “dual production and processing hubs for additional capacity and scheduling flexibility,” the company’s funding announcement states.

Expansions at NorthStar in Beloit’s Gateway Business Park have been seemingly nonstop since 2018 when the company received its first Food and Drug Administration approval related to its Mo-99 development and production.

In April, the company received two electron beam particle accelerators in its effort to bolster production, and Merrick said Monday the accelerator production facility was now complete and being “fitted out with advanced production equipment.”

The electron beam accelerators, each weighing 24 tons, were custom-built in Belgium for NorthStar.

Established by Congress in 2000, NNSA is a semi-autonomous agency within the U.S. Department of Energy responsible for enhancing national security through the military application of nuclear science.

Earlier this summer, Janesville’s SHINE Medical Technologies also received a financial boost with a $150 million investment that bundled money from several sources, including a Koch Industries subsidiary and an early backer of automaker Tesla.

SHINE CEO Greg Piefer said that money will allow his company to quickly ramp up production of medical radioisotopes, including Mo-99, once it begins. SHINE hopes to begin production in Janesville next year.

Gen. Frank McKenzie, Commander of the U.S. Central Command, speaks from MacDill Air Force Base, in Tampa, Fla., and appears on a screen as he speaks about the situation in Afghanistan during a virtual briefing moderated by Pentagon spokesman John Kirby at the Pentagon in Washington, Monday, Aug. 30, 2021. (AP Photo/Manuel Balce Ceneta)

A meal replacement shake being made in the blender.

On a cork board at the store, 80/20 displays all their customers hard work and the weight loss they’ve made.

Tayla Thomas has always been passionate about nutrition and health. She is, after all, a registered nurse. 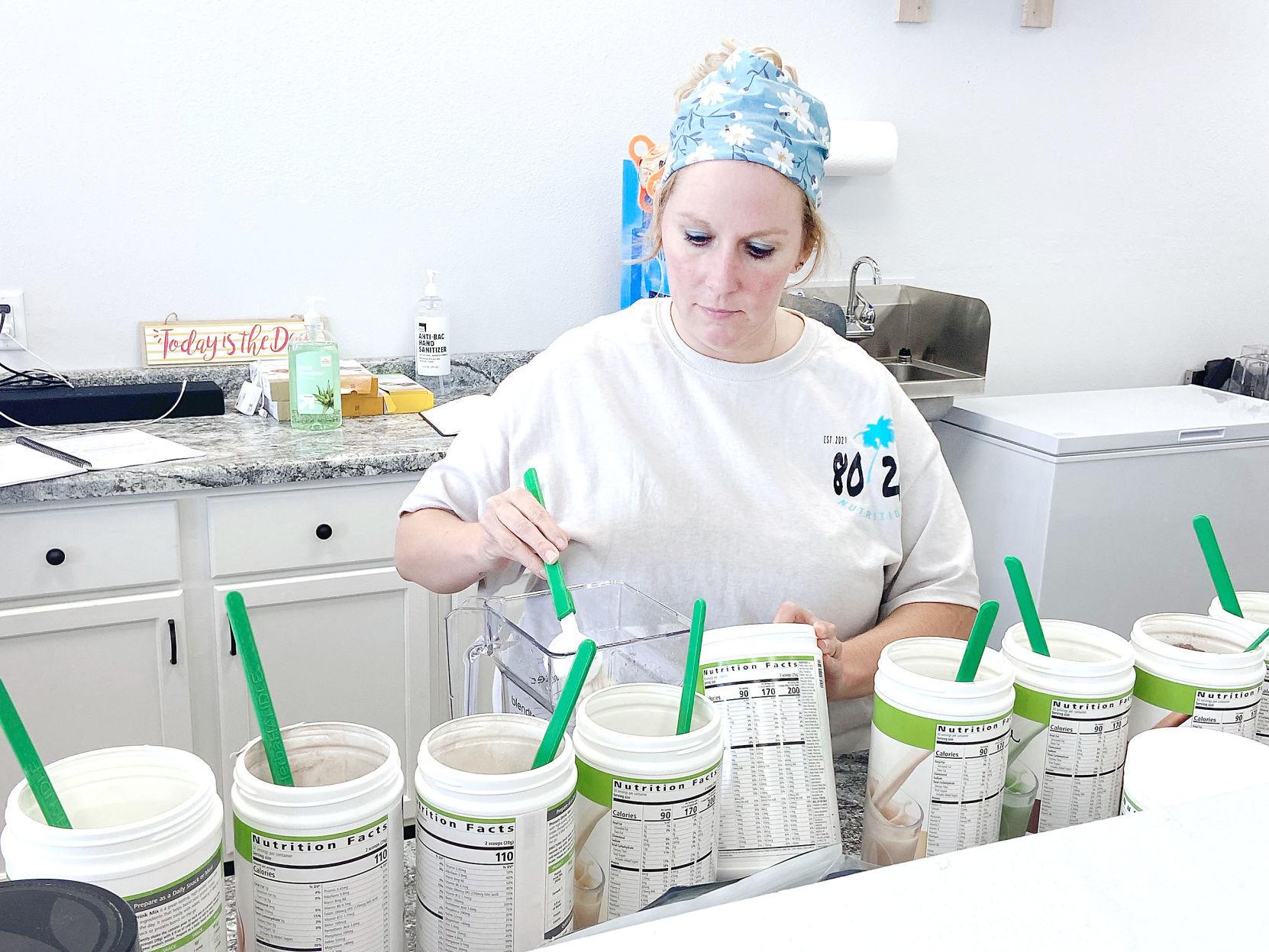 After meeting with individuals looking to set health goals, Thomas will often recommend a drink from her wide menu. The store has 17 flavors of tea and 31 shake flavors from which to choose. Thomas said the tea will boost energy and burn calories, while the shakes provide 24 grams of protein and only 200 calories.

80/20 Nutrition also has three different types of shakes: regular, “fat burner” and “beast mode.” The regular shakes have 24 to 28 grams of protein and will keep you full for three to four hours, Taylor said. The fat burner shakes have the added benefit of burning visceral fat and keeping you full a little longer, she said. 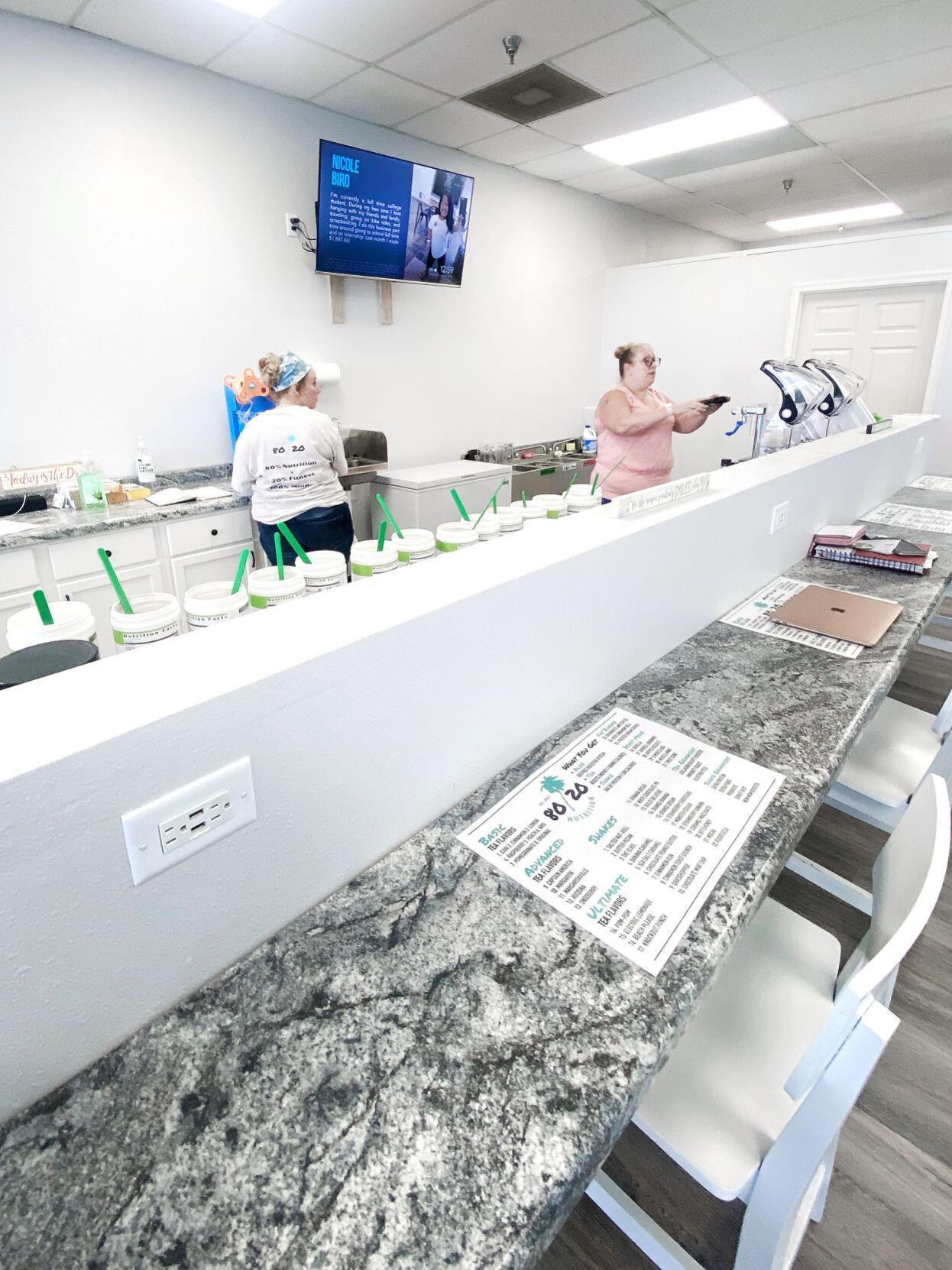 The shop’s “beast mode” shakes, with 34 to 38 grams of protein, are typically for consumption after workouts because they help rebuild muscle, she said. The store has vegan, gluten-free and dairy-free options, as well.

Customers can also add different booster shots to their drinks, as well. Taylor said the “donut shot” is a fat-burning shot that tastes like a donut but helps to burn fat while keeping you feeling full longer.

The shop also has the “new mom booster,” which the owner said helps reduce fatigue and has specific vitamins and minerals that new moms need to support mental performance and focus and regulation of hormonal activity.

Thomas is happy to be part of the community and plans to be very active. She recently joined the Milton Chamber of Commerce and had a presence at the last few farmers markets.

“We’re just looking to be a big part of the community and create a good environment for everybody,” Thomas said.