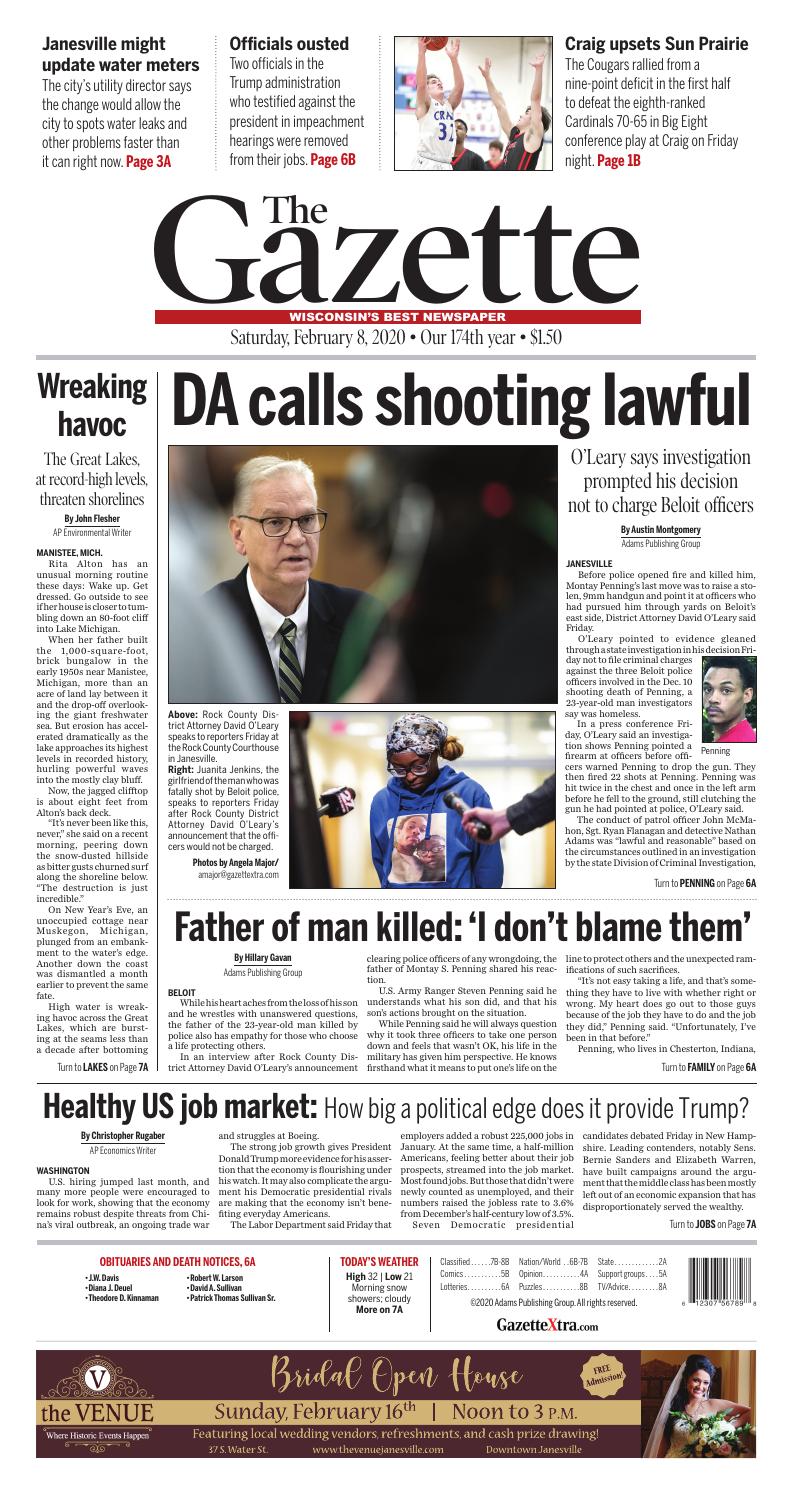 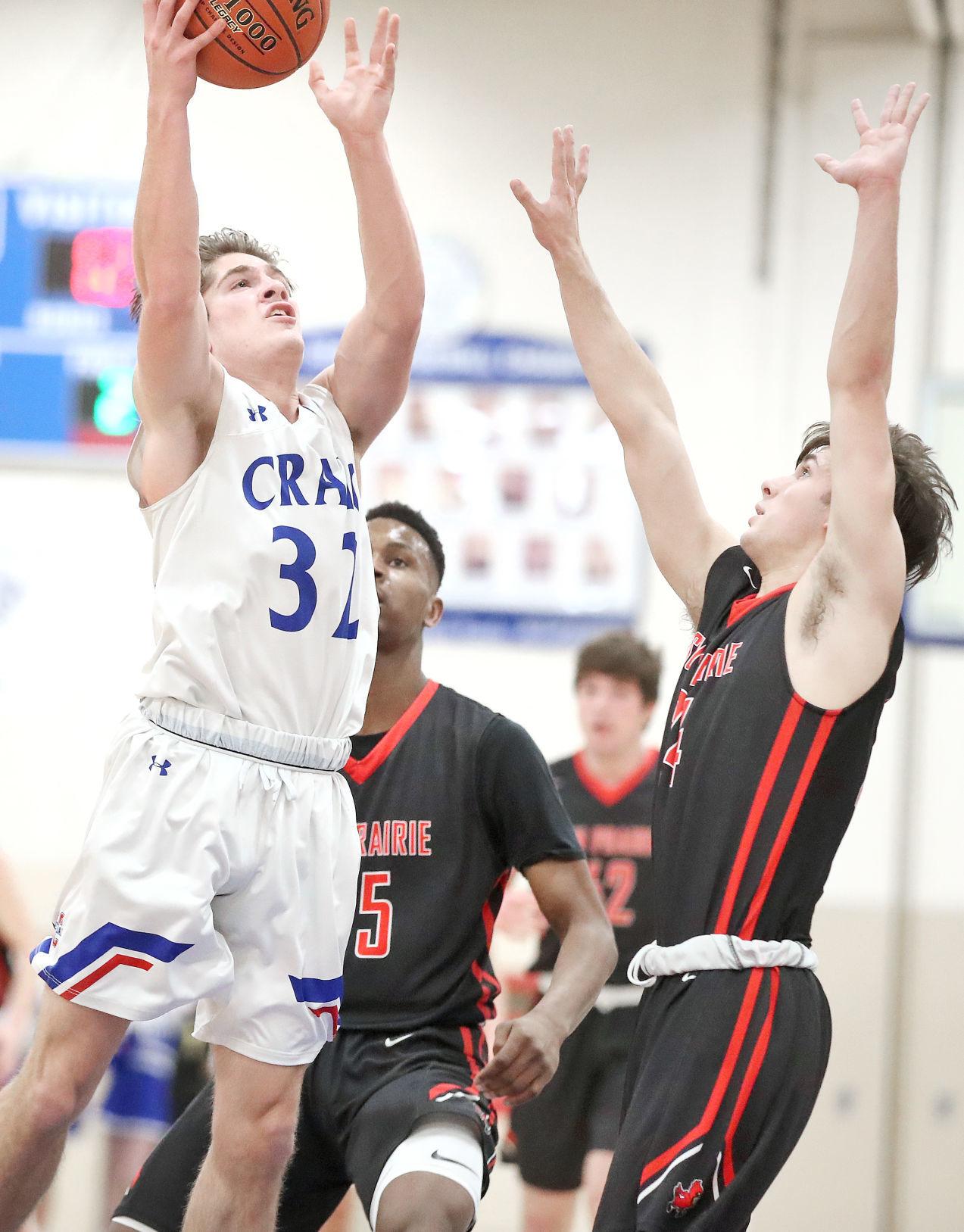 Before police opened fire and killed him, Montay Penning’s last move was to raise a stolen, 9mm handgun and point it at officers who had pursued him through yards on Beloit’s east side, District Attorney David O’Leary said Friday.

O’Leary pointed to evidence gleaned through a state investigation in his decision Friday not to file criminal charges against the three Beloit police officers involved in the Dec. 10 shooting death of Penning, a 23-year-old man investigators say was homeless.

In a press conference Friday, O’Leary said an investigation shows Penning pointed a firearm at officers before officers warned Penning to drop the gun. They then fired 22 shots at Penning. Penning was hit twice in the chest and once in the left arm before he fell to the ground, still clutching the gun he had pointed at police, O’Leary said. 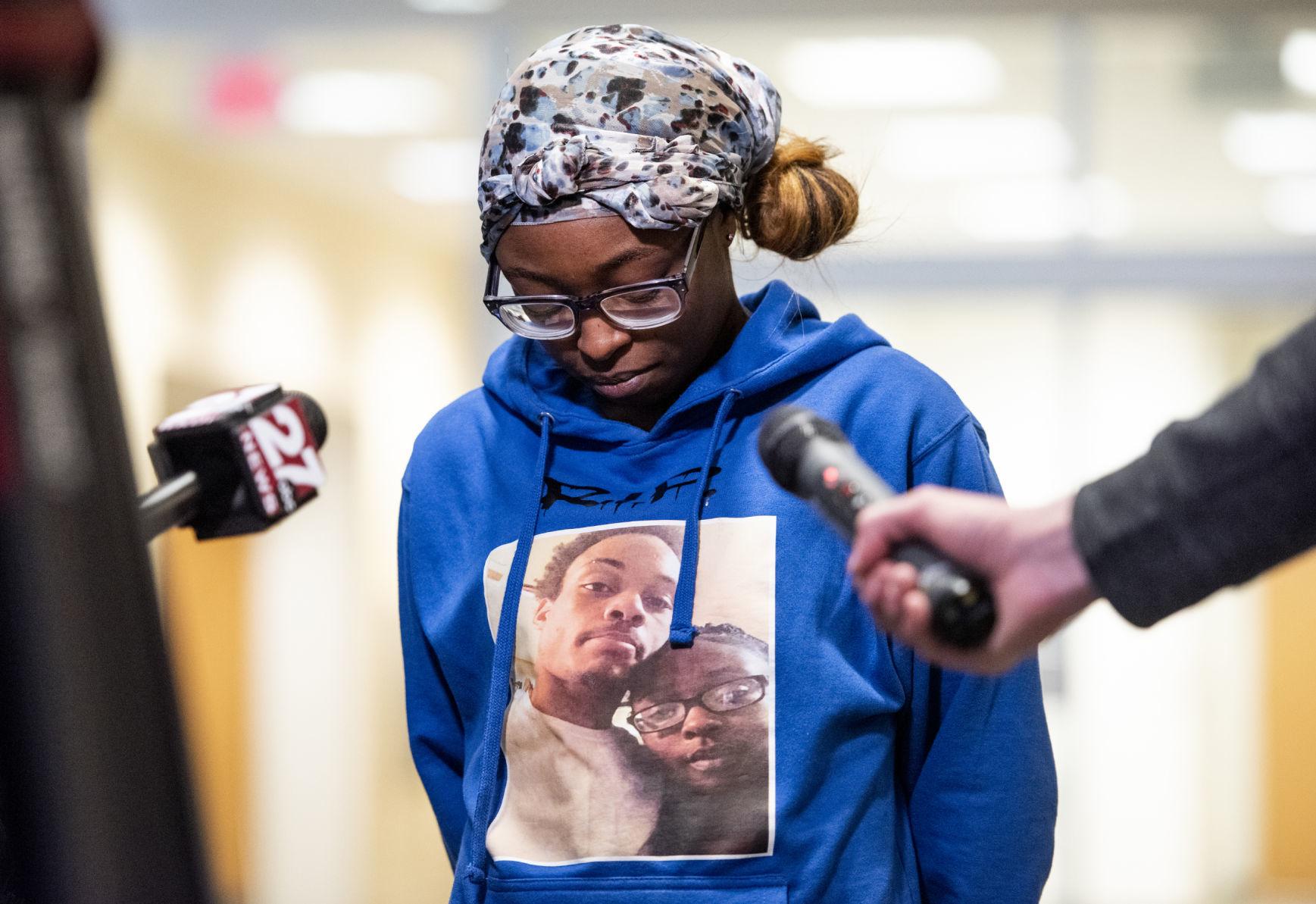 Juanita Jenkins, the girlfriend of the man who was fatally shot by Beloit police, speaks to reporters Friday after Rock County District Attorney David O’Leary’s announcement that the officers would not be charged.

The conduct of patrol officer John McMahon, Sgt. Ryan Flanagan and detective Nathan Adams was “lawful and reasonable” based on the circumstances outlined in an investigation by the state Division of Criminal Investigation, O’Leary said during a news conference.

The Beloit Police Department will conduct an internal review to determine whether changes to department policy regarding body-worn cameras and use of force are required, Chief David Zibolski said Friday during a news conference.

“This is an extremely tragic incident and something that could have been prevented,” Zibolski said. “(The) officers were in a position where they didn’t have another opportunity but to use deadly force.”

“He would not do this,” Jenkins said. “It’s questions and closure. Me seeing the officers take that gun from him broke my heart because I had never seen him with a gun before. There’s still a lot of questions, and I want answers to them.”

New Zion Baptist Church Rev. Michael Bell, who has been outspoken since Penning’s death, said officers should not have used deadly force.

“I believe they could have talked it through,” Bell said. “People should be brought to justice and not killed on the street. I just think there could have been a better result.”

The incident started when a Beloit police officer investigated a stolen vehicle complaint at about 10:43 a.m. Dec. 10 in the 600 block of Portland Avenue. Video from a security camera showed a white Hyundai Accent was stolen by a man wearing a dark-colored hoodie, blue jeans and tennis shoes, according to a summary of the state investigation provided by O’Leary. 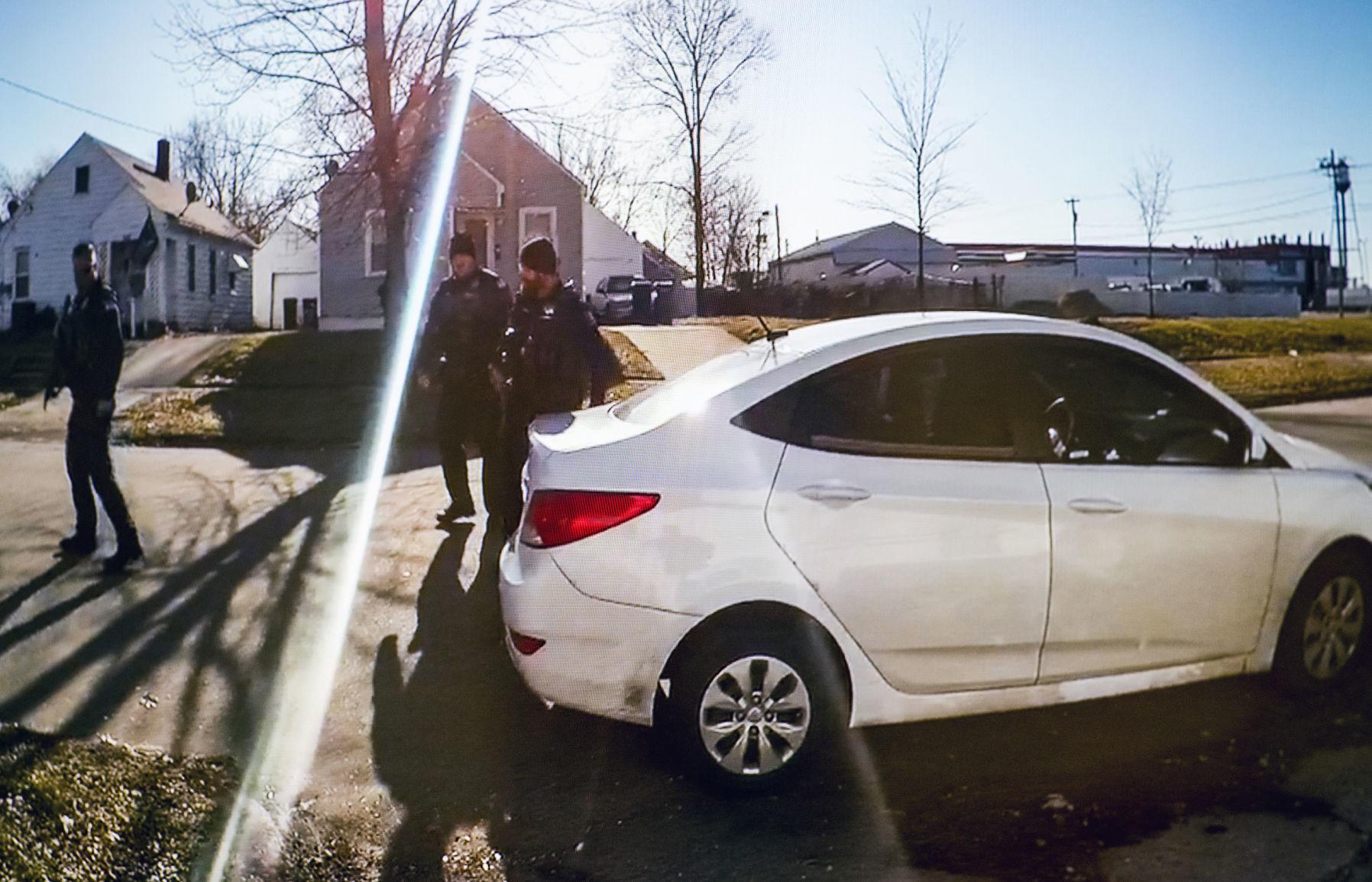 Video from a body camera shows the moments before officers fatally shot 23-year-old Montay S. Penning. The video was shown during a press conference Friday at the Rock County Courthouse in Janesville.

A Rock County sheriff’s deputy already in Beloit investigating a Dec. 7 non-fatal shooting in Janesville heard a radio call of the stolen vehicle, reported seeing it and followed it to a red light at Henry Avenue and Riverside Drive. At 11:42 a.m. on Dec. 10, the deputy reported hearing five to eight gunshots from the Hyundai and saw the vehicle run a red light, O’Leary said.

A chase started when a town of Beloit police officer saw the vehicle and began a pursuit, observing the vehicle nearly crash into another vehicle before going through multiple stop signs heading south on Harrison Avenue before turning west on Summit Avenue and parking slightly on a curb, O’Leary said.

Flanagan joined the foot chase. The three officers saw Penning with a handgun in the backyards of 1852 and 1858 Harrison Avenue and shouted multiple commands for him to drop the gun, O’Leary said.

None of the video recordings included in the state investigation provide a clear view of Penning before he was shot. 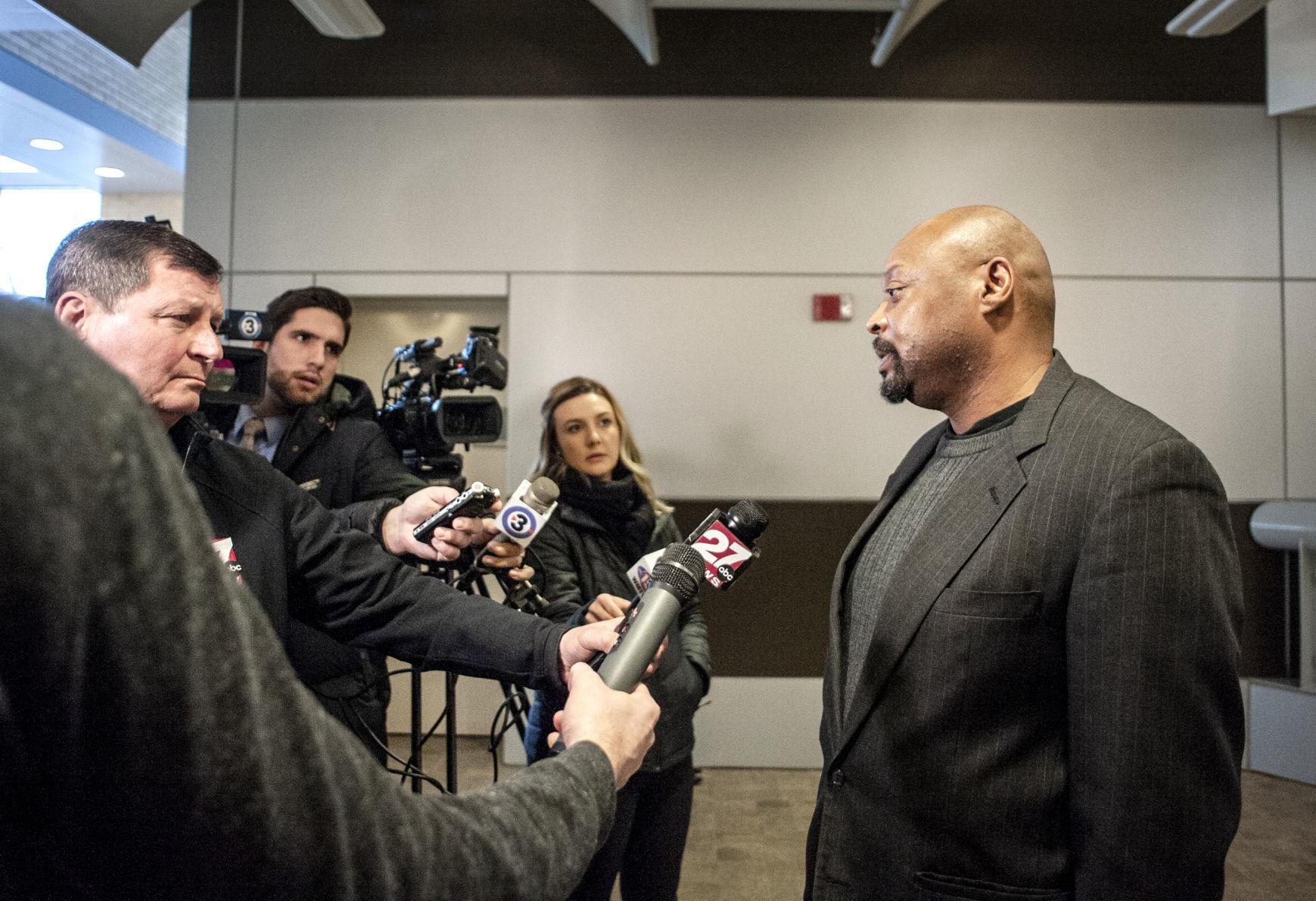 One officer, according to the state’s investigation, shot his handgun multiple times before a bullet casing got jammed in the gun.

Officers fired 22 rounds at Penning. An autopsy conducted by the Dane County Medical Examiner’s Office concluded Penning was hit by gunfire twice in the chest and once in the left finger. O’Leary noted that the arm gunshot wound was consistent with his arm being extended toward officers.

The gun recovered in Penning’s right hand later was discovered to be empty, O’Leary said. It was linked by the Wisconsin State Crime Lab to the shots fired at Riverside Drive and Henry Avenue as well as bullet casings recovered in the stolen vehicle.

The gun was reported stolen in Milton in 2018. An analysis of the weapon linked it to eight other gun-related crimes in Beloit. No arrests have been made in those investigations, according to Zibolski.

Of the three officers involved, two were wearing body cameras during the fatal shooting.

In an interview after Rock County District Attorney David O’Leary’s announcement clearing police officers of any wrongdoing, the father of Montay S. Penning shared his reaction.

U.S. Army Ranger Steven Penning said he understands what his son did, and that his son’s actions brought on the situation.

While Penning said he will always question why it took three officers to take one person down and feels that wasn’t OK, his life in the military has given him perspective. He knows firsthand what it means to put one’s life on the line to protect others and the unexpected ramifications of such sacrifices.

“It’s not easy taking a life, and that’s something they have to live with whether right or wrong. My heart does go out to those guys because of the job they have to do and the job they did,” Penning said. “Unfortunately, I’ve been in that before.”

Penning, who lives in Chesterton, Indiana, has spent most of his life in the military. He wasn’t in an official relationship with the mother of his son but said he got custody of Montay when he was 18 months old. He cared for his son for a year and a half until he got his first deployment to Bosnia in 1998, when Montay returned to his mother.

Because of his deployment, Penning missed many birthdays and pivotal moments in his son’s life.

When Penning was back in the area in 2005, he said, his son stayed with him on weekends. Penning said his son had a great stepfather he was close to until the stepfather died when Montay was in seventh or eighth grade. Montay moved around with his mother and went to live with Penning’s sister during his high school years.

Penning said he struggled to stay close to his son as he was deployed three times to Iraq and two times to Afghanistan from 2004 to 2012.

In recent years, Penning said, he talked to his son regularly. Penning was aware Montay had been getting into trouble, and the father made it clear he would not bail him out if he was arrested. Penning encouraged his son to break the cycle and not have a child out of wedlock. Penning said he tried to be a good role model for his son, but Montay became influenced by others and perhaps was seeking guidance in the wrong place.

When Penning heard the news that his son had been shot, he said he tried to keep his cool and wait until all the facts were gathered before speaking out. He sometimes read hurtful comments on social media about his son or his family. He said he wanted people to know there was some stability and love in his son’s life.

Penning credited a supportive wife and his military background for helping him keep his composure as he dealt with the tragedy.

Steven Penning said he knows what it’s like to be in a situation with adrenaline running and one’s safety at risk.

While he doesn’t believe it takes three officers to suppress one threat, he said things can happen in the heat of the moment.

“Those guys have a rough job, watching each other’s back,” he said.

Although the officers have been cleared, they and Penning’s loved ones might struggle with what transpired Dec. 10 in the 1800 block of Harrison Avenue, he said.

“I don’t blame them. In order to kill, you have to die. A part of you dies, even if you live. Unfortunately, I know what they are going through.”

Penning said he will miss his talks with his son. He plans to get to know his 3-year-old granddaughter, Montay’s child, whom he had never met. He has been talking with Montay’s girlfriend and is optimistic he and his granddaughter will develop a close relationship.

“I can fill her in on things only I would know about her father,” he said.

When asked if he planned to retire anytime soon, Penning said “no.”

“God willing, I will continue in service,” he said. 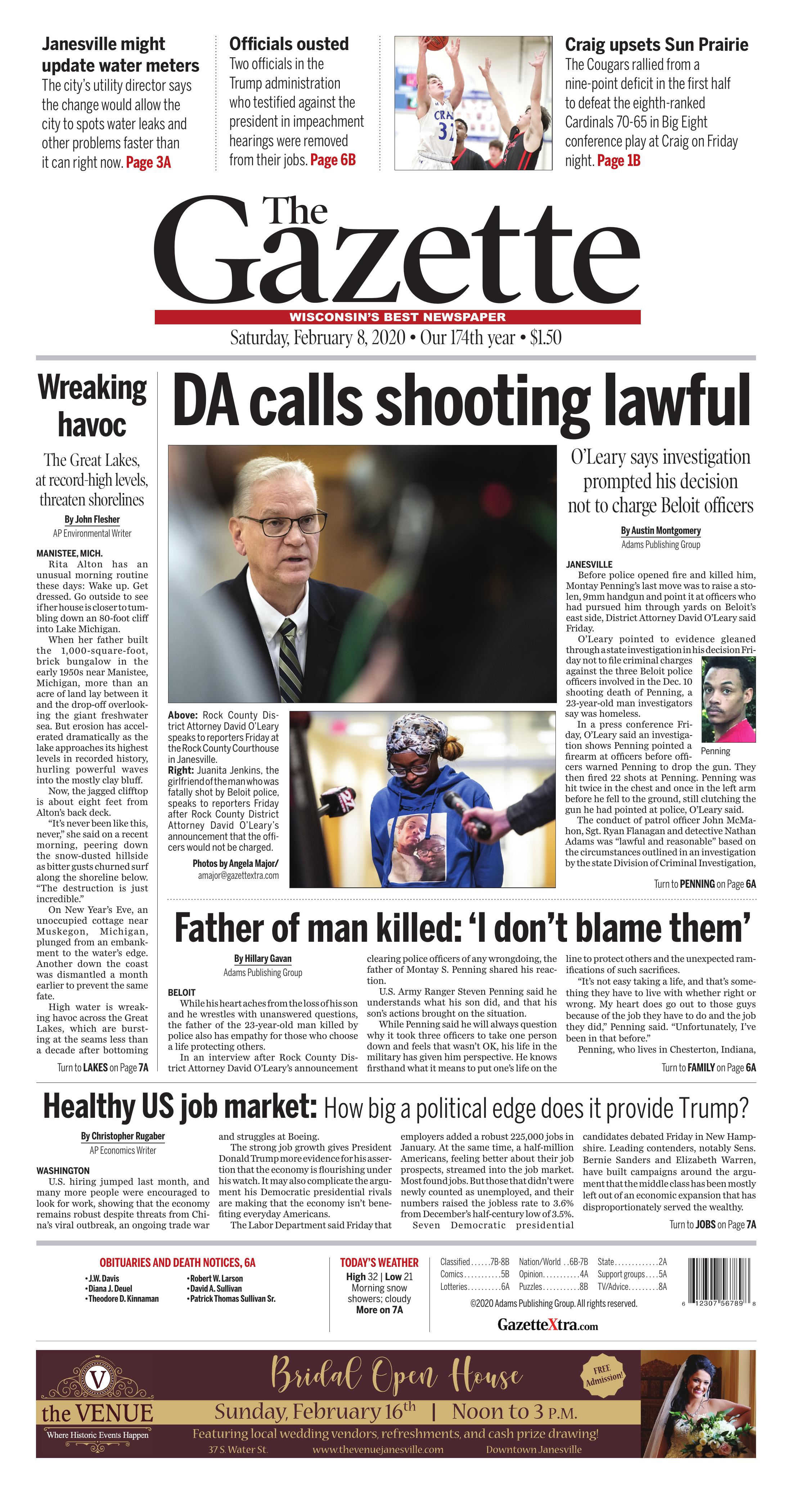