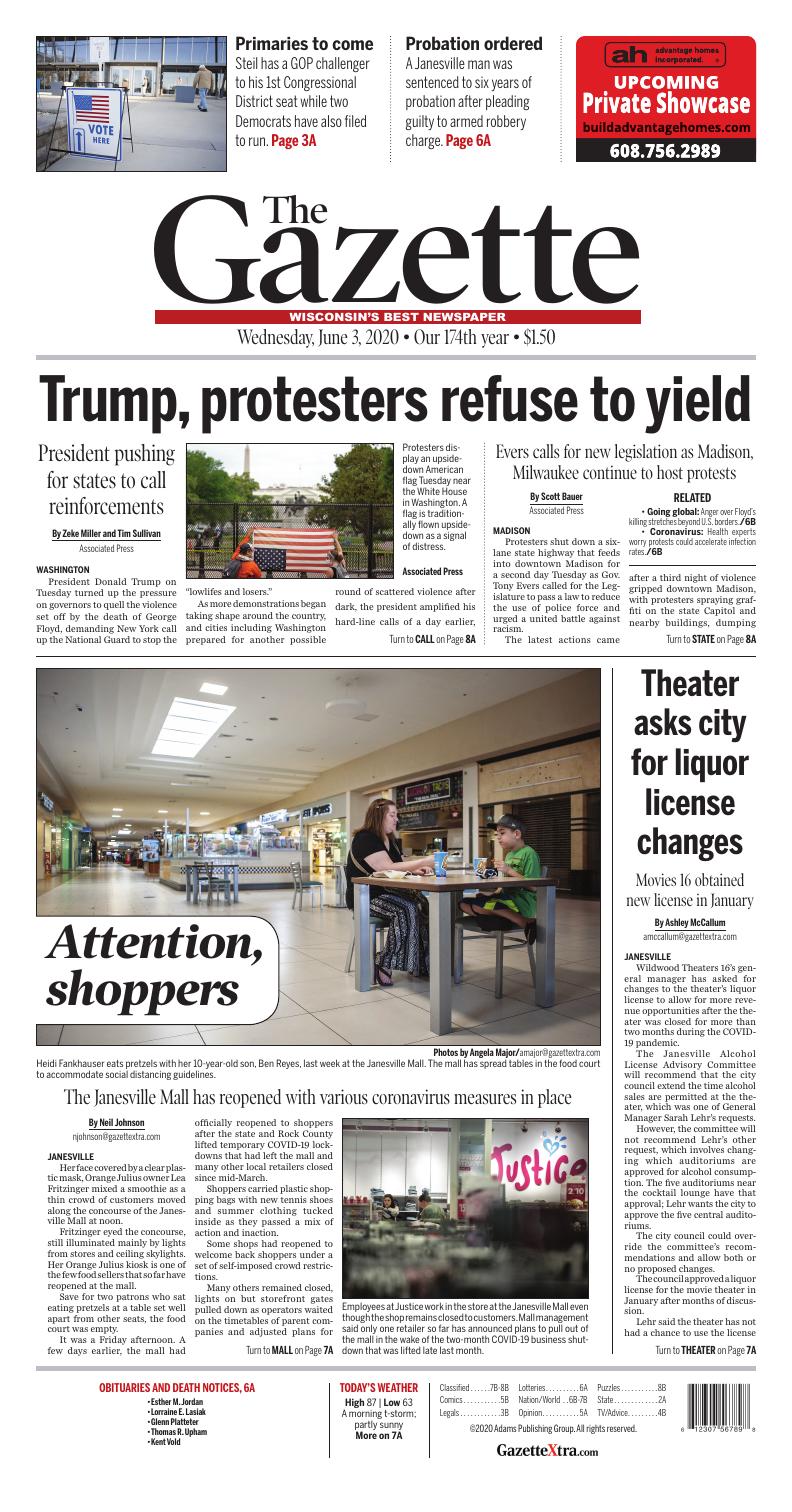 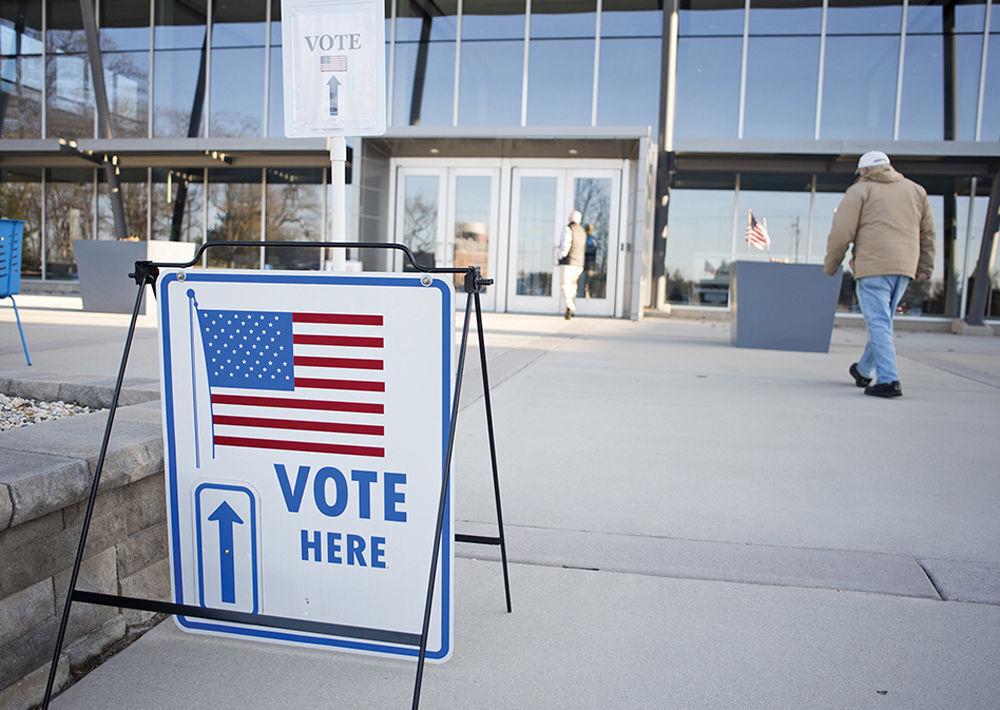 Orange Julius owner Lea Fritzinger rings up a customer while wearing a face shield last week at the Janesville Mall.

Her face covered by a clear plastic mask, Orange Julius owner Lea Fritzinger mixed a smoothie as a thin crowd of customers moved along the concourse of the Janesville Mall at noon.

Fritzinger eyed the concourse, still illuminated mainly by lights from stores and ceiling skylights. Her Orange Julius kiosk is one of the few food sellers that so far have reopened at the mall.

Save for two patrons who sat eating pretzels at a table set well apart from other seats, the food court was empty.

It was a Friday afternoon. A few days earlier, the mall had officially reopened to shoppers after the state and Rock County lifted temporary COVID-19 lockdowns that had left the mall and many other local retailers closed since mid-March.

Shoppers carried plastic shopping bags with new tennis shoes and summer clothing tucked inside as they passed a mix of action and inaction. 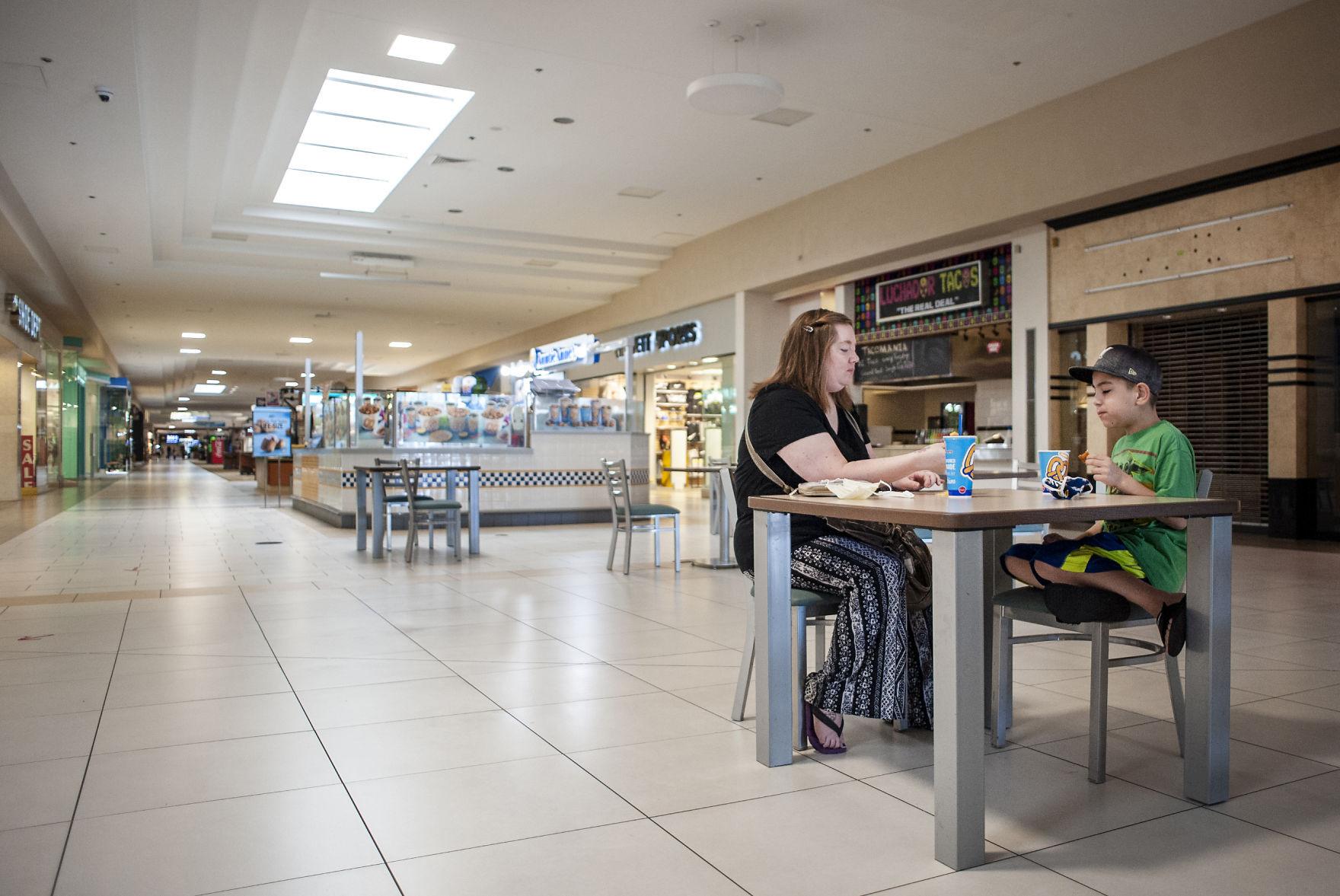 Heidi Fankhauser eats pretzels with her 10-year-old son, Ben Reyes, last week at the Janesville Mall. The mall has spread tables in the food court to accommodate social distancing guidelines.

Some shops had reopened to welcome back shoppers under a set of self-imposed crowd restrictions.

Many others remained closed, lights on but storefront gates pulled down as operators waited on the timetables of parent companies and adjusted plans for reopening in a lingering pandemic.

It means no mingling of foot traffic between the anchors and the concourse. That’s a temporary measure mall Manager Julie Cubbage said is aimed at ensuring anchor stores and the mall itself can stick to a public health guideline for crowd size—25% occupancy during the COVID-19 pandemic.

Near the Orange Julius, a customer in a cloth mask walked out of a nail salon, which was full of chairs with plastic barriers designed to cover customers’ hands and feet while salon techs delivered manicures. Two customers talked with a clerk in a cellphone repair business. Their conversation rang out in the relative quiet of the concourse. 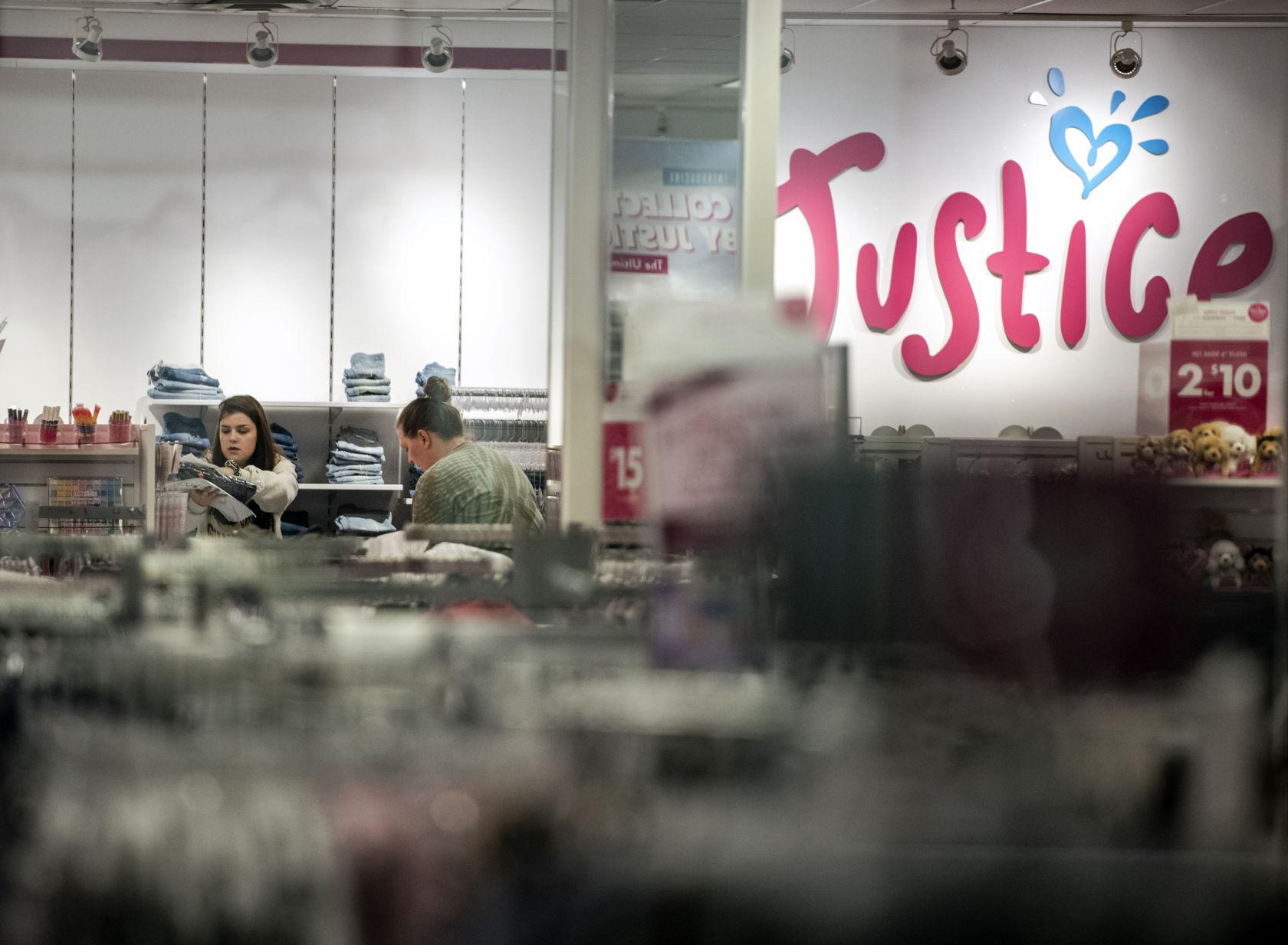 Employees at Justice work in the store at the Janesville Mall even though the shop remains closed to customers. Mall management said only one retailer so far has announced plans to pull out of the mall in the wake of the two-month COVID-19 business shutdown that was lifted late last month.

Nearby, the University Bookstore had signs announcing a clearance sale. The Madison-based retailer announced last week it’s leaving the mall. It’s the first retail departure announced at the mall since the COVID-19 shutdown ended.

Fritzinger eyed the scene around her and poured out her hopes into a plastic cup that held a pastel, half-frozen fruit smoothie.

“I’m an optimist. I’m just hoping we’ll see a little more business every day,” she said. “I don’t know what else we can hope for.”

Cubbage walked the mall in a new pair of tie-dyed canvas sneakers she bought at one of the reopened shops. She followed red arrows the mall has placed on the concourse floor that cue shoppers to stay in lanes.

Cubbage pointed out red X’s taped on the floor outside the Finish Line footwear store. On the day the mall reopened, the Finish Line was among just a few shoe sellers along the concourse to reopen, she said. A queue of customers was waiting—hence the red X’s to mark a safe distance between customers.

Managers have reorganized the store’s layout to use mainly the walls and front windows for product display. That way, customers have more room in the store.

The changes are needed because the shop last week was among the busiest in the mall.

“It’s more than psychological. People want new shoes to start the summer. That’s the most normal thing in the world,” Cubbage said.

American Eagle Outfitters also has reopened. The young-adult apparel retailer is greeting customers with a kiosk stocked with paper masks and hand sanitizer before they step into the shop.

Next to that kiosk was a stand that advertised a “60% off” sale on store items. 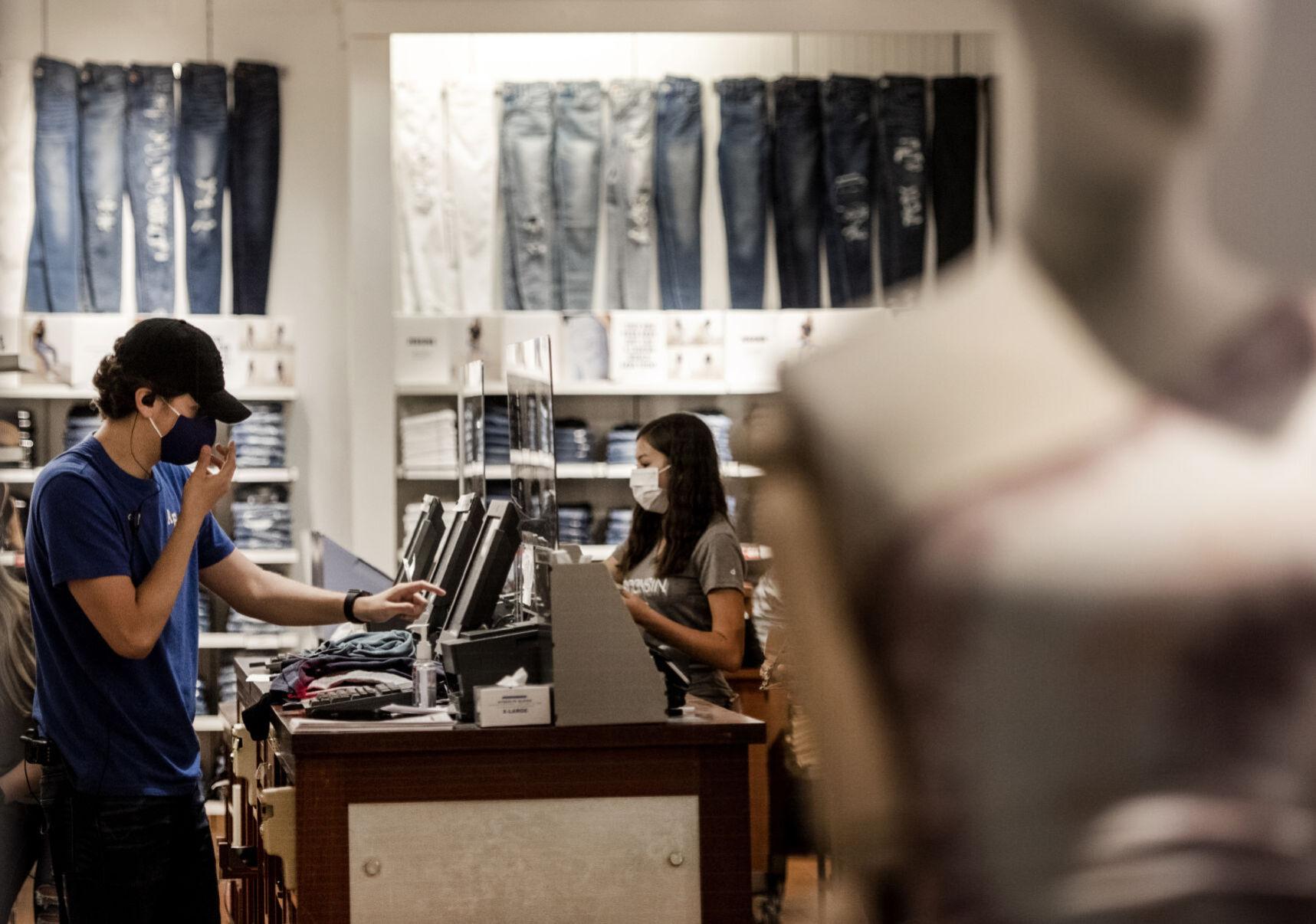 An employee at American Eagle Outfitters adjusts a face mask while ringing up customers last week at the Janesville Mall. Some of the mall’s stores have reopened after the state and Rock County lifted a COVID-19 business shutdown. Other mall stores are continuing to retool to better handle crowds during the ongoing pandemic.

Other shops had staff inside but remained closed. Cubbage said some retail chains are still working through major overhauls to safeguard their staff and shoppers. Many have given the mall’s management their projected reopening dates, although some then pushed the dates back a week or two.

“These stores’ employees all have to be trained all over again because they’re implementing big changes to the store’s layout and checkouts,” Cubbage said. “They’re learning how to do all new public health-related procedures in the way they handle transactions with the customer.”

Aside from the University Bookstore, Cubbage said she has not heard of any stores that plan to pull out of the mall or not reopen.

The mall still hasn’t reopened its doors for the early bird gaggle of morning mall walkers. And seats in lounges and the food court are spaced to encourage people to stay distant from each other, Cubbage said.

By midday, many of those in the mall weren’t meandering, window-shopping clientele. They hustled quietly from one shop to the next, either flying solo or in groups of two or three. About half the shoppers wore cloth or paper face masks. Most open shops had staff wearing face coverings, too. 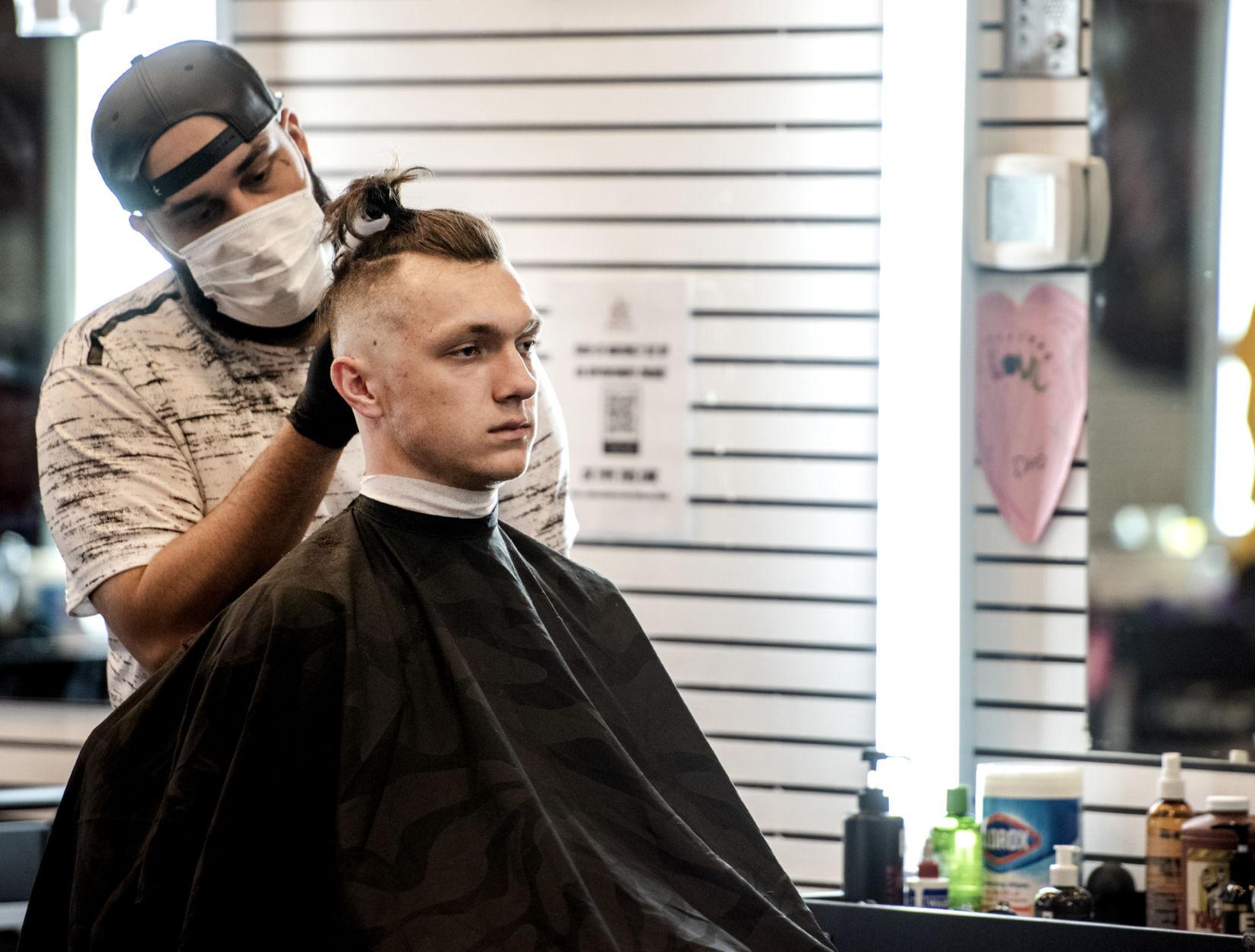 Myles Parr has his hair cut by barber Jordon Carrillo last week at Five Star Barbershop in the Janesville Mall. The barbershop had just opened at the mall in March when the COVID-19 pandemic and state mandated shutdown forced the mall to close for two months. Last week, all the shops barber chairs were full, and one customer waited outside the shop for his turn for a haircut.

Many shoppers carried bags from multiple stores. They had been spending money.

“It’s nice to see people walking around the mall with bags, with purchases. That’s the most important thing, if you’re going to be open,” Cubbage said.

“It’s clear not everybody’s coming in just to hang out, but they’re actually shopping, so that’s a good thing.”

The Wildwood Movies 16 general manager has asked for changes to the theater's liquor license to allow more revenue upon reopening. Movie theaters across the country have been closed for months because of the COVID-19 pandemic.

Wildwood Theaters 16’s general manager has asked for changes to the theater’s liquor license to allow for more revenue opportunities after the theater was closed for more than two months during the COVID-19 pandemic.

The Janesville Alcohol License Advisory Committee will recommend that the city council extend the time alcohol sales are permitted at the theater, which was one of General Manager Sarah Lehr’s requests.

However, the committee will not recommend Lehr’s other request, which involves changing which auditoriums are approved for alcohol consumption. The five auditoriums near the cocktail lounge have that approval; Lehr wants the city to approve the five central auditoriums.

The city council could override the committee’s recommendations and allow both or no proposed changes.

The council approved a liquor license for the movie theater in January after months of discussion.

Lehr said the theater has not had a chance to use the license because construction on the bar was completed during closure. The theater has been closed since the governor issued a safer-at-home order March 25.

Lehr told the alcohol license committee Tuesday that she hopes to reopen June 19.

Theater closures have created significant financial challenges for the industry. AMC Theaters, one of the nation’s largest theater chains, filed for bankruptcy in April.

“As a local and privately owned business, we are trying to be optimistic on the impending future,” Lehr said in a letter to city council. “In order to do so, we need to take measures that will be effective and profitable.”

Lehr hopes extending the time of alcohol sales will allow for more sales.

The original liquor license dictated alcohol sales from 6 p.m. to 1 a.m Monday through Friday and 11 a.m. to 1 a.m. Saturday and Sunday.

Lehr also asked that the auditoriums that permit alcohol be changed from the five east auditoriums to the five or six central auditoriums—Nos. 1, 8, 9, 10, 11 and 16—with the elimination of Auditorium 11, if desired.

The theater has installed new leather reclining seats in the central auditoriums, Lehr said, which now have more seating than the originally approved auditoriums.

Residents voiced many concerns about the theater getting a liquor license while its seats and facilities were in poor condition, Lehr said.

Wildwood Movies 16 took a step closer to getting a liquor license Wednesday as the Janesville Alcohol License Advisory Committee forwarded a positive recommendation to the city council.

Many of those concerns have been addressed, she said.

Committee member Mark Bumpus said he did not want to change the alcohol-permitted auditoriums because the original decision allowed consumption in the auditoriums closest to the bar, meaning less traffic near restricted areas.

Committee member Kevin Riley said he was comfortable changing the auditoriums but thought the sale times should remain the same.

The committee sided with Bumpus after Riley left the meeting early because of other obligations.

Several committee members said they had hoped to see the theater bar open for a while before making revisions to the license.

Milwaukee Grill also asked for changes to its liquor license Tuesday in an effort to make up for pandemic-related losses.

The committee will send a favorable recommendation to the city council to allow Milwaukee Grill to serve alcohol in a new outdoor waiting area.

In a letter to the committee, owner Mark Otis said he wanted to use the waiting area because restaurants are operating with restricted capacities in the pandemic.

The city's Alcohol License Advisory Committee will recommend that the city council approve a class A liquor license for a planned downtown marketplace.

Richard Neeno, owner of Lark restaurant downtown, plans to open Lark Market in the building adjacent to his restaurant.

Lark Market would offer wine and spirits ranging from $15 to $150 a bottle, according to a letter from Neeno to the committee.

The market requires a class A license with an exception allowing an 80-foot alcohol display in the store.

Janesville ordinances require stores to have a separate section, point of purchase and entrance for alcohol sales.

The exception allows for small in-store liquor displays and has been granted to Basics Co-op, Aldi and the former Mauer's Market.

The committee will recommend the license with these conditions:

Neeno plans to open the store from 10 a.m. to 2 p.m. most Saturdays, but wiggle room was given in case of downtown events or other changes.

The city council will vote on the license Monday. 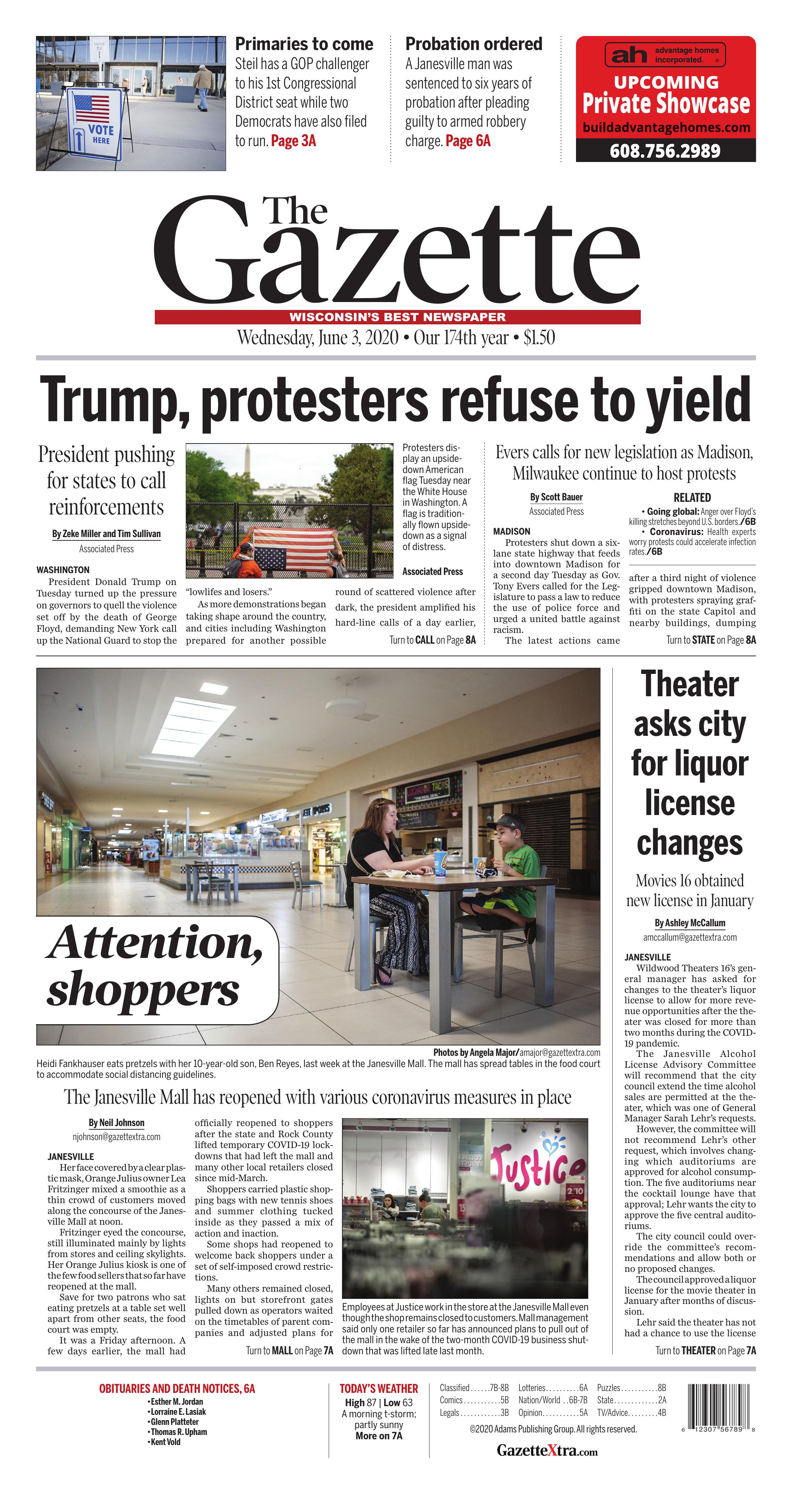