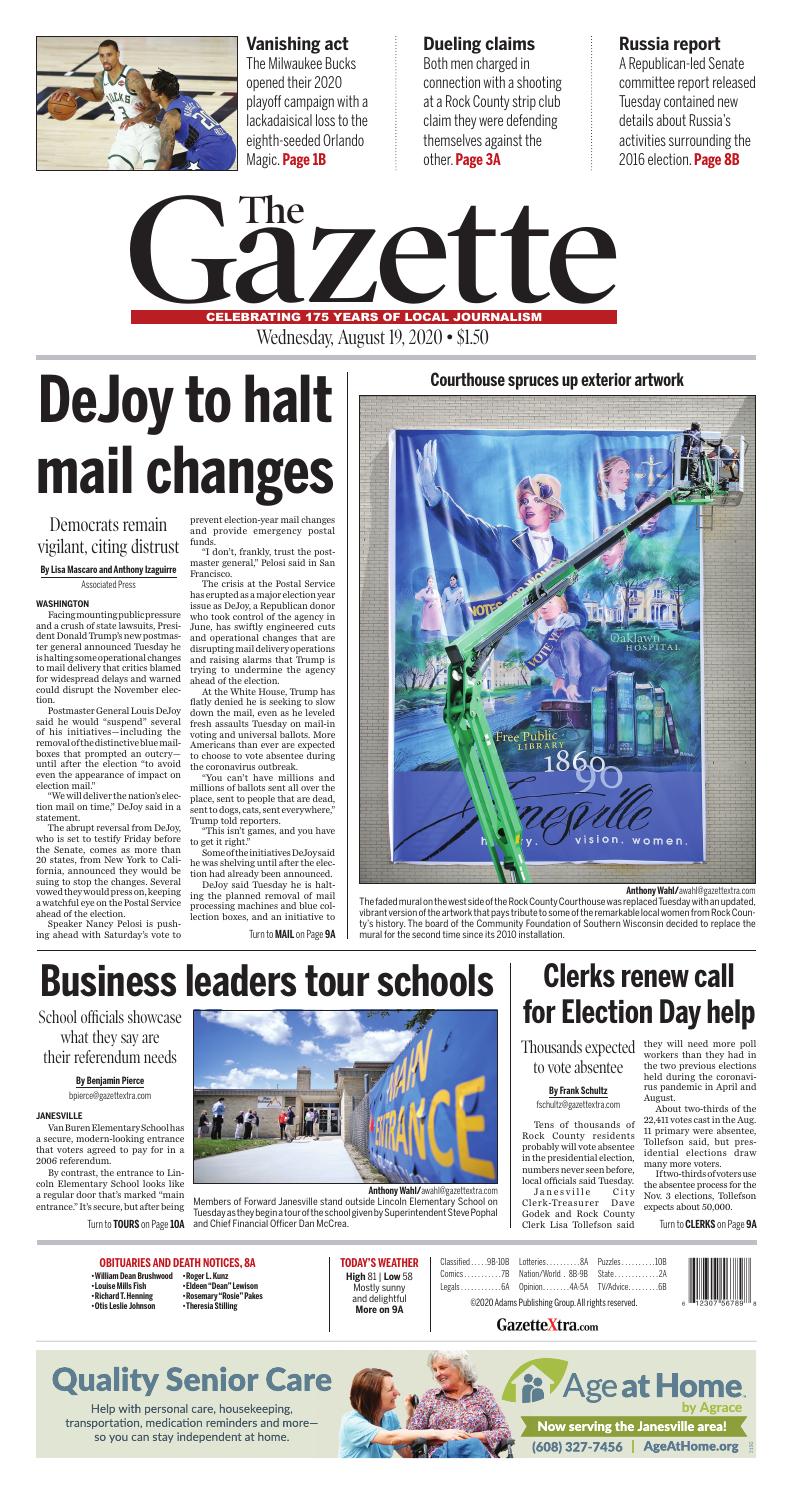 Members of Forward Janesville stand outside Van Buren Elementary School as they begin a tour of two schools given by Superintendent Steve Pophal and Chief Financial Officer Dan McCrea on Tuesday. The school officials were trying to highlight needs that would be addressed by two proposed referendums that go before voters Nov. 3.

Van Buren Elementary School has a secure, modern-looking entrance that voters agreed to pay for in a 2006 referendum.

By contrast, the entrance to Lincoln Elementary School looks like a regular door that’s marked “main entrance.” It’s secure, but after being buzzed in, visitors must walk down a long hallway, past instructional areas, and turn left to reach the office. Those who get lost could have “free roam” of the halls if a staff member doesn’t find them, Principal Shawn Galvin said.

Representatives of Forward Janesville, the city’s chamber of commerce, got a firsthand look Tuesday at what a proposed $22.5 million capital referendum would do for some city schools.

In coming weeks, the chamber’s board of governors likely will issue a statement supporting the capital referendum and the district’s $37 million operational referendum, both of which go to voters Nov. 3. 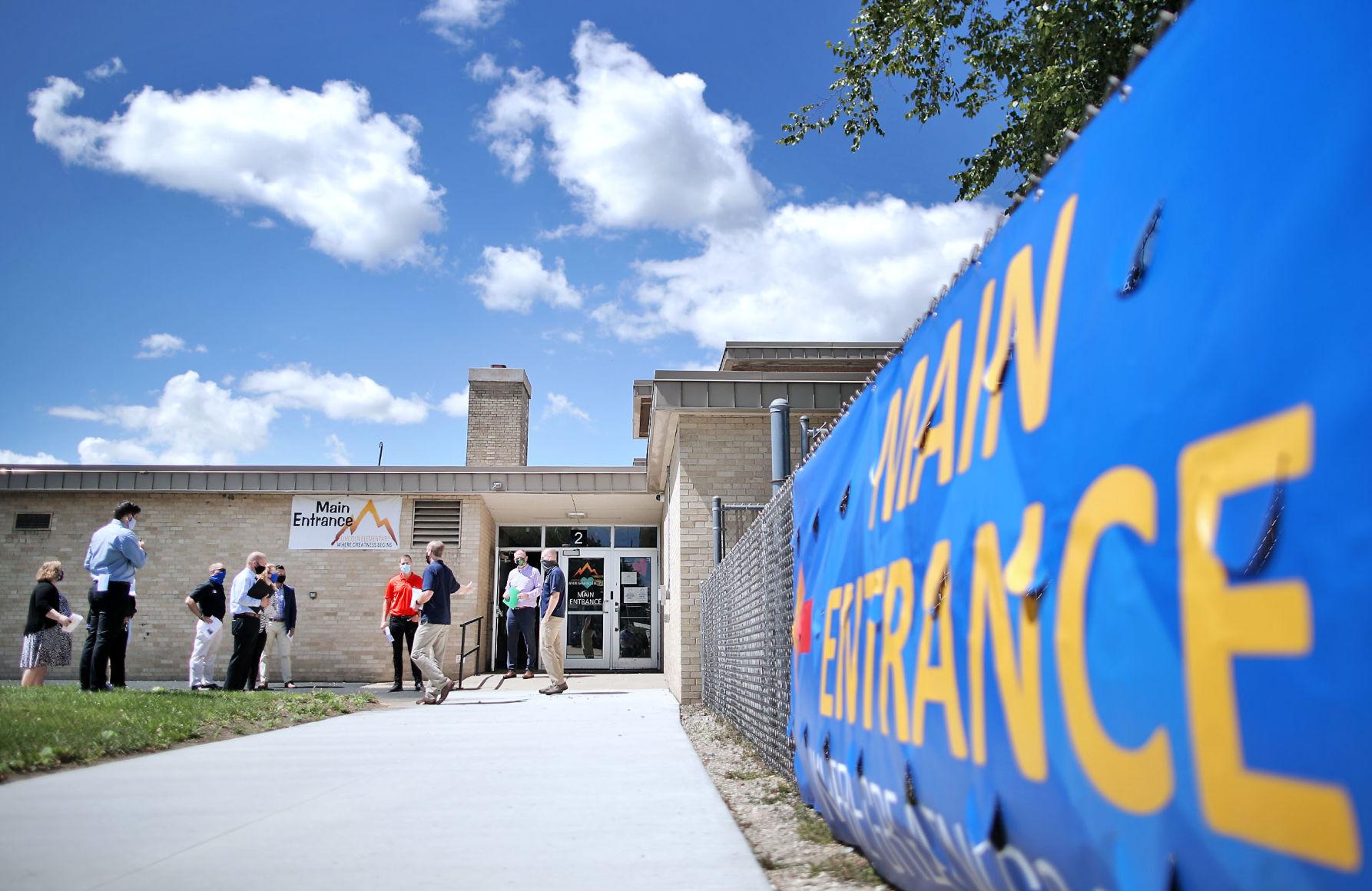 Members of Forward Janesville stand outside Lincoln Elementary School as they begin a tour of the school given by Superintendent Steve Pophal and Chief Financial Officer Dan McCrea on Tuesday. District officials say Lincoln's needs include a new secure entrance and a new boiler system.

Mail-in ballots will play a bigger role because of the pandemic, so the chamber hopes to issue an opinion soon, said Dan Cunningham, vice president of government relations and education.

Tuesday was a chance to get a more realistic idea of the needs, he said.

“We just wanted to learn more because you hear these numbers talked about, and you see the tax impact and everything, and you say, ‘OK, what is this actually going to do?’” Cunningham said. “So it allows our group to kind of put images to the numbers a little bit. Hopefully this will help them conceptualize to see what this money is actually going to be spent on.”

In his 14 years at Forward Janesville, Cunningham said he doesn’t remember a time when the group didn’t support a referendum because it views education as vital to the community.

About $19.5 million of the $22.5 million the capital referendum seeks would be used to create secure school entrances, where visitors would be buzzed in to a secure space and talk to office staff before entering the school.

The remaining $3 million would be used to replace old boiler systems and for maintenance.

Pophal said the district has about $130 million in projects that need to be done, but officials wanted to be fiscally responsible in their initial proposal.

Van Buren Principal Stephanie Pajerski said her school’s secure entrance, built after a 2006 referendum, created a safer environment and is “one of the nicest” entrances in the school district. She said she hopes to see similar entrances at all school buildings, including Lincoln. 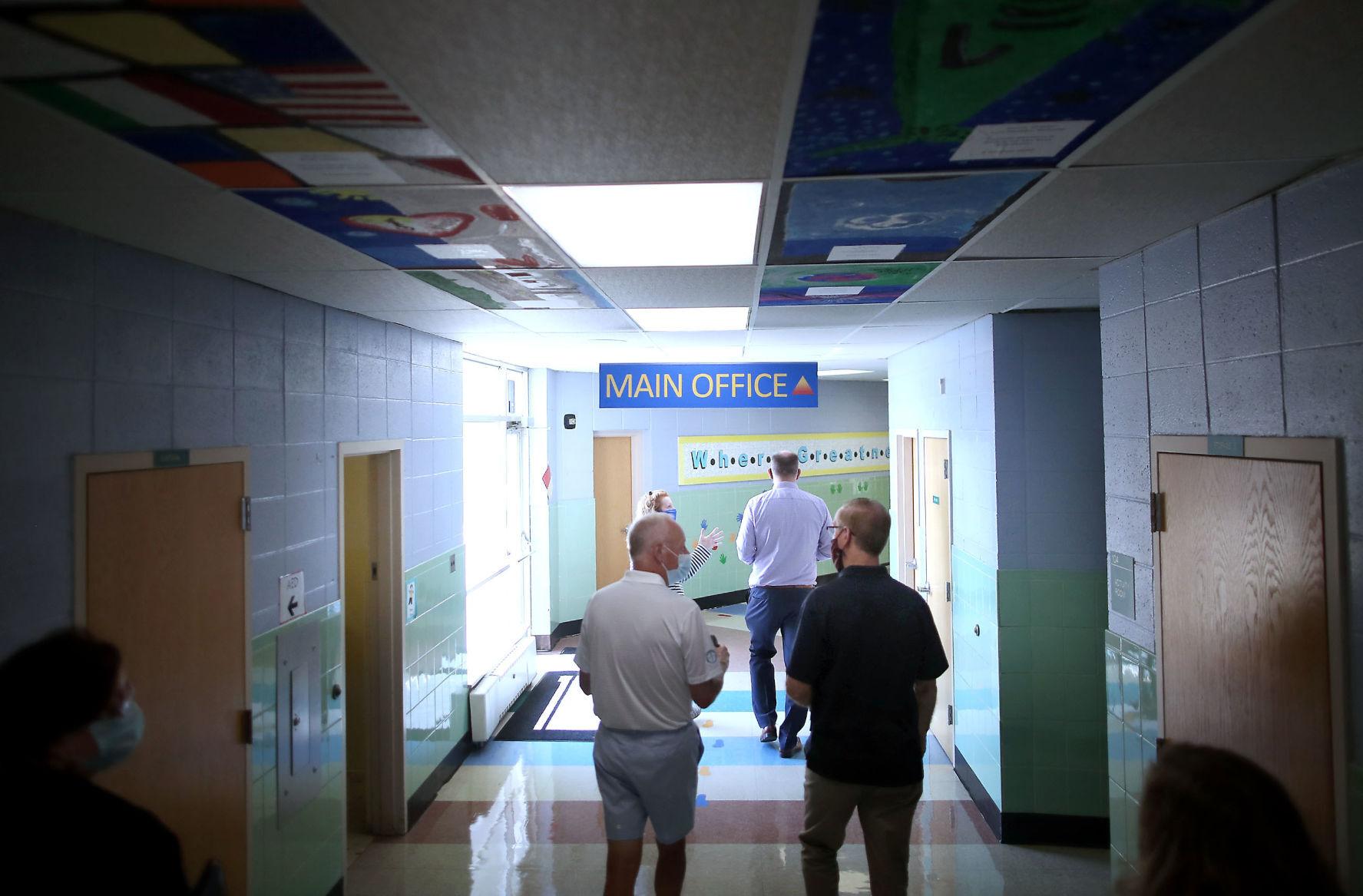 Members of Forward Janesville walk down a long hallway to reach Lincoln Elementary School’s office during a tour Tuesday.

Another issue at Lincoln is the lack of space for students who are being dropped off or picked up.

“We are no longer a walk-to-school community, so pickup and drop-off get dangerous,” said Galvin, the principal.

Pophal told Forward Janesville representatives that he understands the concern about a referendum during the COVID-19 pandemic. But he said both the operational and capital projects are needs, not wants.

“We really believe strongly that a referendum was the right thing to do right now, even though it might seem like it’s not,” he said. “We’re in a pandemic, and we’ve got a lot of unpredictability and a lot of uncertainty.

“But the reality is we’re going to have to move forward with reductions if we don’t have a referendum that passes, and we really feel like this referendum is about an opportunity for the community to weigh in and make that decision, really, about what do you value.”

Dave Holterman, chairman of the government relations council for Forward Janesville, also sits on the Milton School Board. He said he likely would support the referendum after seeing the needs. 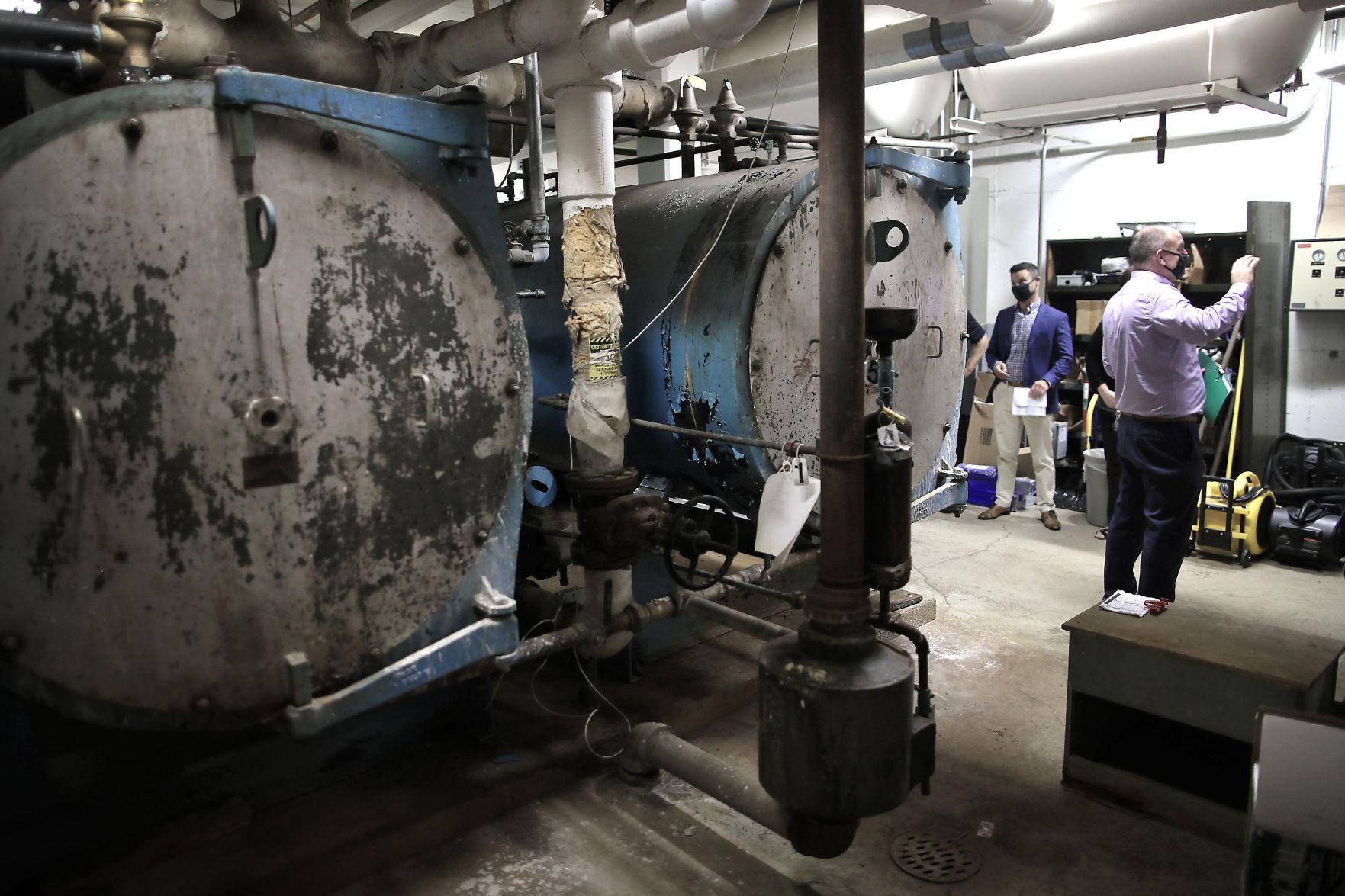 Dan McCrea, chief financial officer for the Janesville School District, discusses the age of Lincoln Elementary School’s boiler system during a tour for Forward Janesville members Tuesday. The boiler system has been in use for 60 years and needs to be replaced.

He was glad district officials identified security and essential maintenance as top priorities.

“I think they’re spot-on with secure entrances and then piggybacking on that with boilers, because they’re dealing with equipment that’s 50, 60, 70 years old,” Holterman said. “I don’t feel like it’s controversial to say to the public, ‘We need stuff that’s safe, something that’s able to meet the needs of our kids.’”

Janesville City Clerk-Treasurer Dave Godek and Rock County Clerk Lisa Tollefson said they will need more poll workers than they had in the two previous elections held during the coronavirus pandemic in April and August.

About two-thirds of the 22,411 votes cast in the Aug. 11 primary were absentee, Tollefson said, but presidential elections draw many more voters.

If two-thirds of voters use the absentee process for the Nov. 3 elections, Tollefson expects about 50,000.

That number could rise if the coronavirus situation worsens, or it could drop if the situation improves, Godek speculated.

Many of the longtime poll workers are older and don’t want to risk their health, so officials are looking for replacements. Tollefson said she has already spoken to service groups and high school students.

Voters certainly are hearing a lot about absentee voting.

Former first lady Michelle Obama pleaded for early voting in her speech to the Democratic National Convention on Monday, and Godek said that could spur a lot of absentee-ballot requests.

But Godek said he was already seeing a flood of requests for ballots or to register to vote in the week before the convention.

On the Republican side, President Donald Trump has been quoted as saying people should vote absentee.

The president also has said he doesn’t like mail-in voting because it would lead to fraud, though there is no evidence of that happening. Apparently, he was trying to attack the practice of sending mail-in ballots to all voters that some states use. That is different from Wisconsin’s absentee process, in which absentee voters must first request a ballot.

Politicians aside, many will simply want to avoid the polls to stave off the coronavirus.

Answers to common questions about absentee voting in Wisconsin:

A: Clerks will mail ballots to voters starting Sept. 17. Allow about five days for delivery. Godek said if no ballot is received within a week, call his office.

Q: How do I request an absentee ballot?

A: Go online to myvote.wi.gov. The website will ask for your name, birth date and registration status. Voters not registered will be prompted to do so on the site before requesting a ballot.

The website automatically sends the ballot requests to the local clerk.

Those who have never requested an absentee ballot will be required to upload a photo of their photo ID, which is done most easily with a smartphone, Tollefson said.

Voters also can request an absentee ballot by mailing their request to their clerk’s office along with a photocopy of their photo ID.

Other questions about absentee voting procedures are answered on the state Elections Commission website, gazette xtra.com/absentee.

Q: How do I make sure my ballot is counted?

A: Make sure it is delivered by 8 p.m. on Election Day. Late arrivals are not counted.

The U.S. Postal Service recommends mailing ballots at least one week before Election Day. Tollefson said because of uncertainty about what will happen, she recommends two weeks.

“The sooner people can get their ballots back in to us, the better for everybody,” Godek said.

Godek praised local postal workers’ efforts. They notified his office of ballots to be picked up as late as 7:30 p.m. on Aug. 11, he said.

Godek recommended voters include a phone number and/or email address on their ballot envelopes in case officials spot a problem. The lack of a witness signature or date, for example, can be fixed, but if the clerk has to communicate by mail, it will take a long time to sort out the problem.

Voters may bypass the mail and simply drop their ballots at their municipal clerk’s office. Janesville and some other municipalities will provide a drop box for this purpose.

Voters can monitor their ballots’ progress on myvote.wi.gov, which will tell them when it was mailed to them, when to expect delivery and when it is received in clerk’s office, Tollefson said.

Q: When is in-person absentee voting?

In-person absentee voting requires a photo ID. An official will issue a ballot on the spot, and the voter must complete it, seal it in an envelope and return it to the clerk’s staff before leaving the office.

Local officials are recruiting poll workers for Nov. 3. Those interested should contact their city, village or town clerk. Workers must be residents of the county and ages 18 or older. High school students ages 16 or 17 also qualify with the consent of a parent, principal and a 3.0 grade-point average. These are paid positions, although volunteering is allowed.

Apply online in the city of Janesville by going to the city website, clicking on the “I want to” tab and selecting volunteer/city programs. 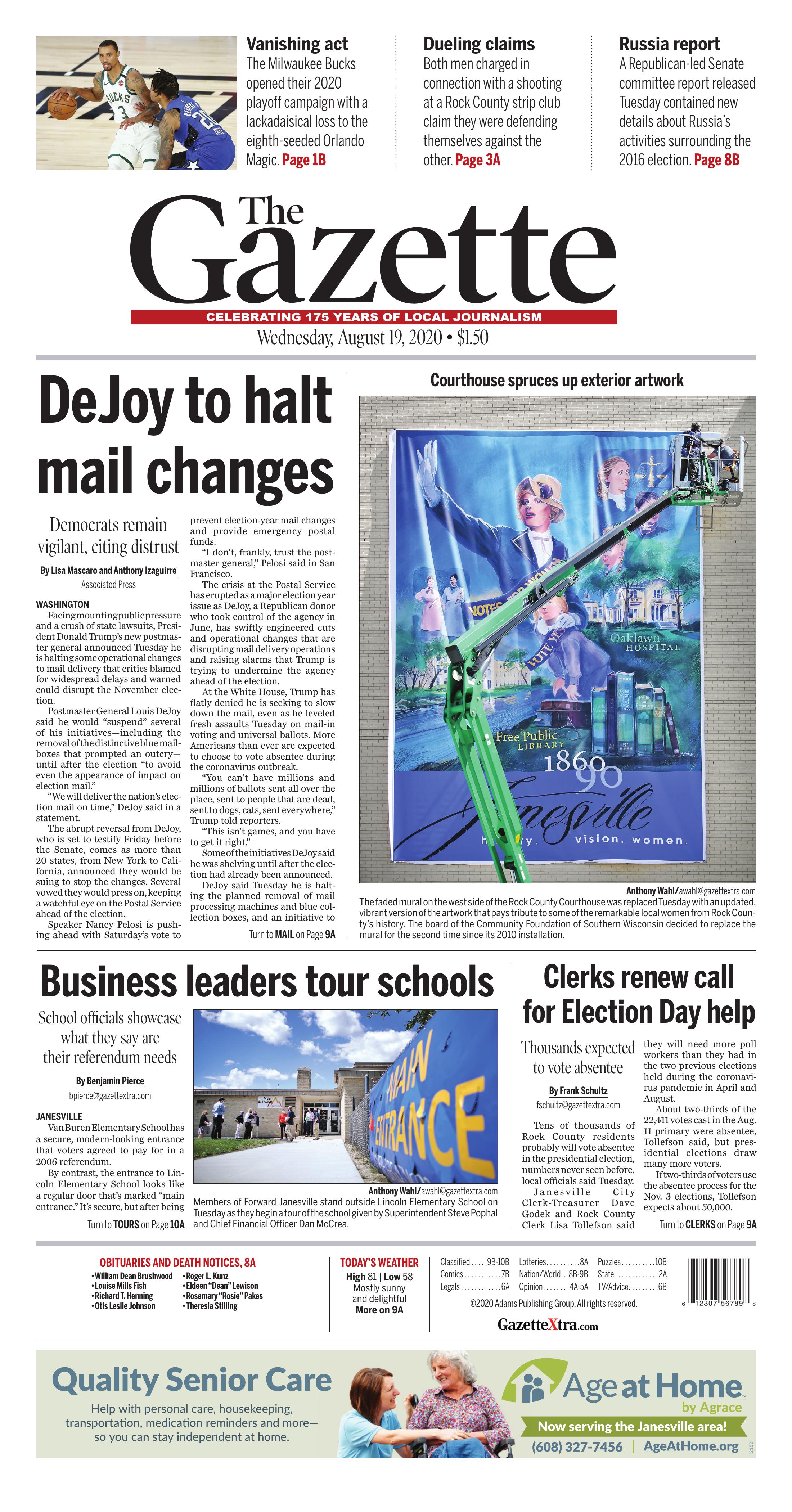