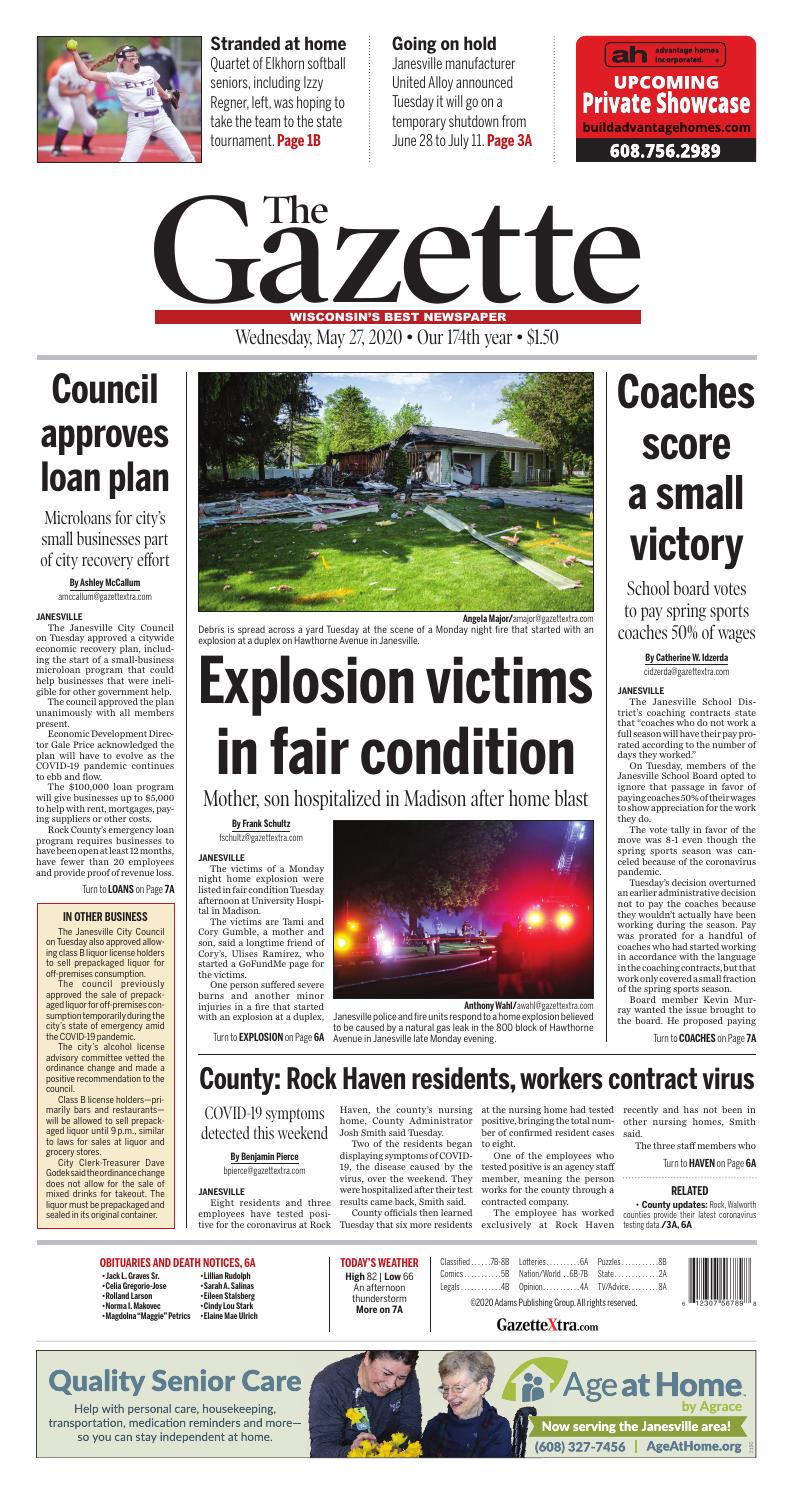 Debris is spread across a yard Tuesday at the scene of a Monday night fire that started with an explosion at a duplex on Hawthorne Avenue in Janesville.

The scene of a fire that started with an explosion is investigated Tuesday in Janesville.

Debris surrounds a damaged vehicle Tuesday after an explosion and fire at a Hawthorne Avenue duplex in Janesville.

The Janesville Fire Department on Tuesday investigates the scene of a fire caused by an explosion in Janesville on Monday night.

Residents pass by the scene of a duplex fire Tuesday on Hawthorne Avenue in Janesville. The fire was caused by an explosion Monday night that sent two people to the hospital.

A bed and bed sheets are among the debris at the scene of a fire Tuesday in Janesville.

One person suffered severe burns and another minor injuries in a fire that started with an explosion at a Hawthorne Avenue duplex Monday night.

The Janesville Fire Department reports an estimated loss of $150,000 in the fire Monday night at 806 Hawthorne Ave.

The Janesville Fire Department reports two people from the residence were transported for medical treatment, one with minor injuries and one 'with severe burns.'

The victims of a Monday night home explosion were listed in fair condition Tuesday afternoon at University Hospital in Madison.

The victims are Tami Huppert and Cory Gumble, a mother and son, said a longtime friend of Cory’s, Ulises Ramirez, who started a GoFundMe page for the victims.

One person suffered severe burns and another minor injuries in a fire that started with an explosion at a duplex, according to a Janesville Fire Department report.

Neighbor Mike Hodges on Tuesday asked that people stop driving by the scene, saying children play in the neighborhood and could get hurt.

Ramirez, who has been in touch with a family member, said the mother and son were in intensive care at a Madison hospital.

“As soon as I heard it was Cory, my heart just sank. I’m just glad he survived,” Ramirez said.

Cory had a tube removed from his mouth Tuesday and was doing better, said Ramirez, who heard this from a relative at the hospital.

In a report released Tuesday, the fire department said the victim with more serious injuries had “severe burns.”

As the Gazette reported Monday night, firefighters were told the explosion happened when a tenant in the duplex lit a cigarette, which ignited leaking natural gas.

Neighbors reported the house was fully engulfed in flames before firefighters responded at 9:15 p.m., according to the report.

“The fire was contained to one unit, but it was difficult to extinguish, as natural gas was fueling the fire,” the report states. “The fire was completely extinguished after Alliant (Energy) arrived on scene and turned off the gas.”

One side of the duplex is listed as a total loss. The tenant in the other side was not injured and is staying with family, the report states.

The Gazette has heard stories from several sources about helping at the scene, all of which seem plausible and from sincere sources.

Some of the stories conflict in their details, but a constant theme is that a woman was found under a mattress near the burning house, and several people helped pull her to safety.

Battalion Chief Chris Lukas of the Janesville Fire Department said the first rule if you think you smell natural gas is not to touch or do anything that might ignite the gas, even turning a light on or off. Get out of the house and call 911, Lukas said, and let firefighters test the air and decide if the gas company should be called. 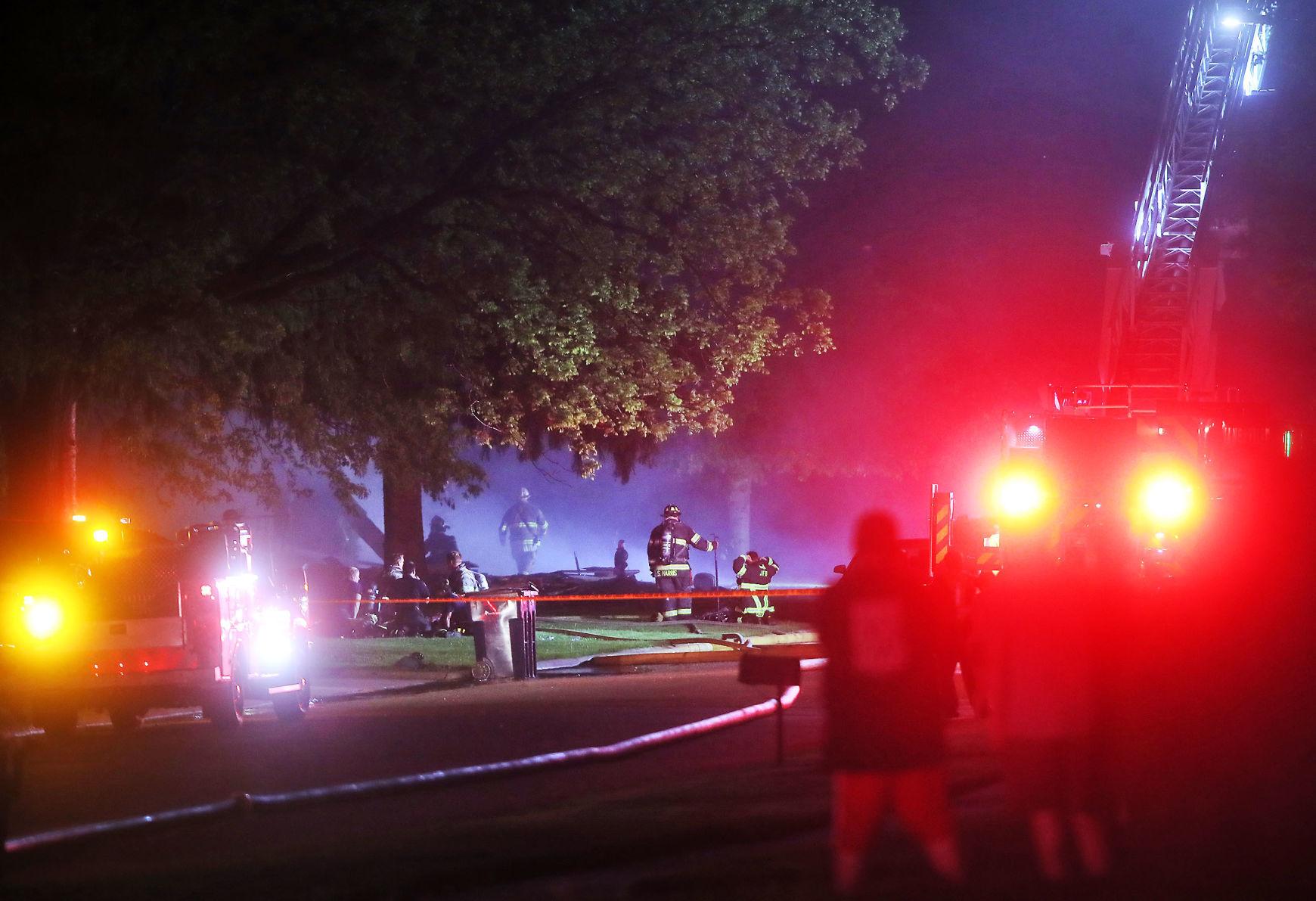 Janesville police and fire units respond to a home explosion believed to be caused by a natural gas leak in the 800 block of Hawthorne Avenue in Janesville late Monday evening.

Two of the residents began displaying symptoms of COVID-19, the disease caused by the virus, over the weekend. They were hospitalized after their test results came back, Smith said.

County officials then learned Tuesday that six more residents at the nursing home had tested positive, bringing the total number of confirmed resident cases to eight.

One of the employees who tested positive is an agency staff member, meaning the person works for the county through a contracted company.

The employee has worked exclusively at Rock Haven recently and has not been in other nursing homes, Smith said.

The three staff members who tested positive are isolating themselves away from the facility, he said.

A majority of staff and residents were tested for the virus over the last week, and results from those tests began coming in Tuesday, Smith said.

The nursing home is receiving groups of test results every few hours.

The recent cases are not the first among the staff. Earlier this month, another Rock Haven employee tested positive for the virus.

The six residents who most recently tested positive are being isolated in their rooms, Smith said. Staff members have been assigned to those residents, and the employees wear full personal protective equipment and do not interact with other residents.

The eight residents who tested positive live in the same household—or area—at the nursing home, which has made isolation easier, Smith said.

He said that household has been “shut down,” meaning no one is allowed in or out unless absolutely necessary.

Information about the positive cases was shared Tuesday with all residents and with those who have loved ones with powers of attorney, Smith said.

He said more positive cases are possible as more test results come in over the next few days. 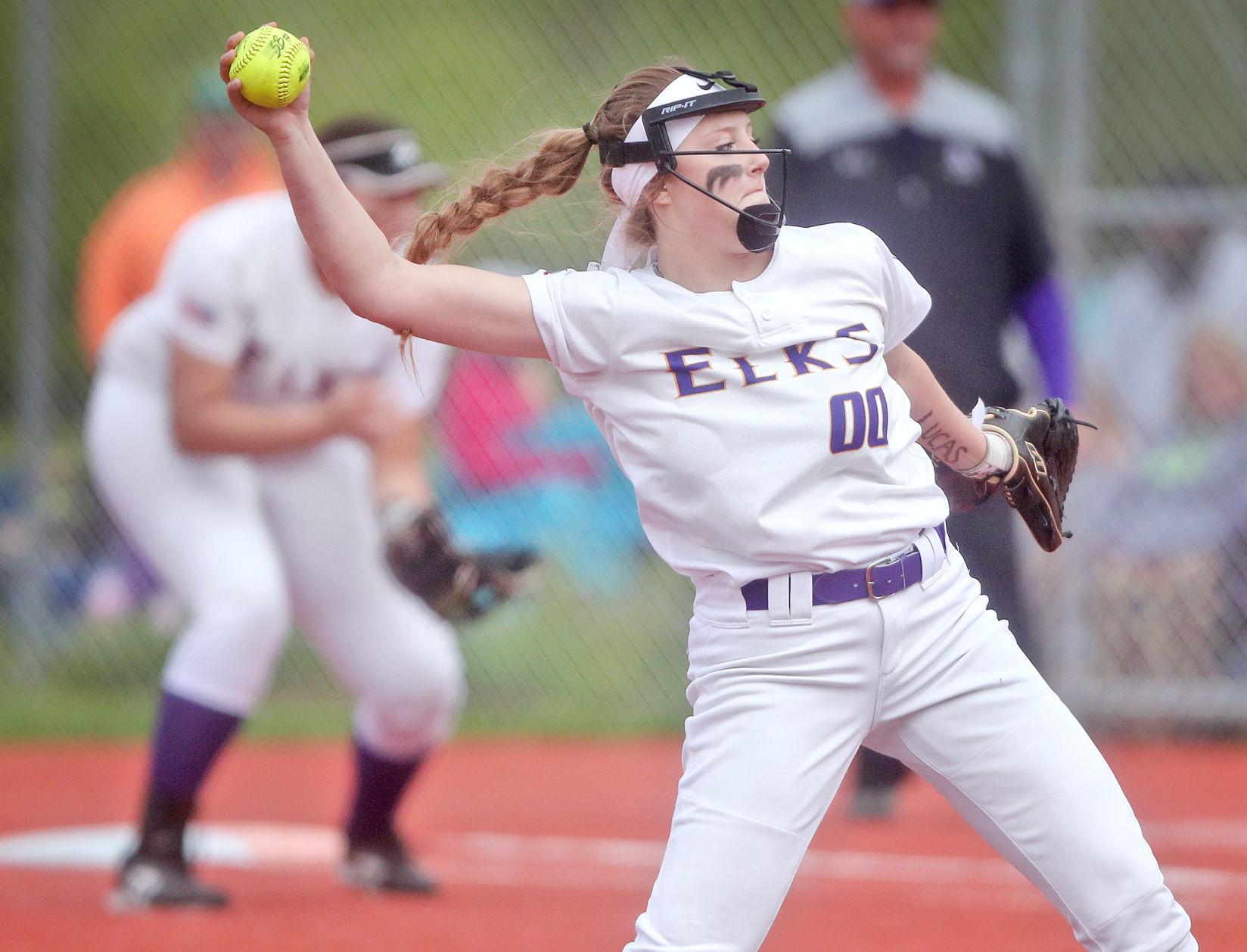 Pitcher Izzy Regner throws one down over home plate during Elkhorn’s sectional semifinal game against Beloit Memorial on Tuesday. Beloit Memorial held on to a 1-0 lead to win the game and advance in the tournament.

The Janesville School District’s coaching contracts state that “coaches who do not work a full season will have their pay prorated according to the number of days they worked.”

On Tuesday, members of the Janesville School Board opted to ignore that passage in favor of paying coaches 50% of their wages to show appreciation for the work they do.

The vote tally in favor of the move was 8-1 even though the spring sports season was canceled because of the coronavirus pandemic.

Tuesday’s decision overturned an earlier administrative decision not to pay the coaches because they wouldn’t actually have been working during the season. Pay was prorated for a handful of coaches who had started working in accordance with the language in the coaching contracts, but that work only covered a small fraction of the spring sports season.

Board member Kevin Murray wanted the issue brought to the board. He proposed paying coaches in full.

In a previous interview with The Gazette, Murray argued that coaching doesn’t just take place during the season. Coaches work with students year-round, making sure they’re doing their school work, attending open gyms and generally behaving themselves.

Cathy Myers, who teaches in the Hononegah School District in Illinois, supported the 100% payout.

“The coaches I know are still in contact with their players,” Myers said. “They’re still working with them.”

Other area school districts have also opted for 100% pay. These include Milton, Elkhorn, Lake Geneva Badger, Evansville, Brodhead, Beloit Turner, Clinton, Edgerton and Whitewater. Others are providing at least a portion of their coaches’ pay; Orfordville Parkview is paying 80%, Big Foot is paying 50% and Delavan-Darien is paying 10%.

The Janesville School District has 47 spring coaches at the middle and high schools. Paying them all at 100% would cost $178,700, Assistant Superintendent Scott Garner previously told The Gazette.

Providing full pay for no work during the season didn’t sit well with board member Lisa Hurda.

The board had just sat through a 45-minute presentation about the district budget for the next several years. Even setting aside the financial effect of the coronavirus pandemic, the district was facing a structural deficit that would have been difficult to overcome in its own right.

The pandemic has exacerbated the problem because it has adversely affected state revenue. Because schools make up the largest part of the state budget, districts fear there could be significant cuts to the state education budget for the 2020-21 school year, officials have said.

“We’ve got a train wreck coming down the pike,” Hurda said in reference to the budget issues. She acknowledged that pay for coaches wasn’t a large amount of the district’s total budget but said that every little bit matters.

Michelle Haworth said she supported giving the coaches something but not 100%.

Not all of the coaches were working virtually during the spring season, she said. In addition, the majority of coaches’ work does take place during the season, which was called off.

Haworth also wondered what would happen if sports were canceled in the fall and the district had to determine how much to pay them. If that comes to pass, Haworth said she would want coaches to meet some job expectations in order to be paid.

Board member Karl Dommershausen said paying the spring coaches something would be a gesture to “show our thanks.”

The Janesville City Council on Tuesday approved a citywide economic recovery plan, including the start of a small-business microloan program that could help businesses that were ineligible for other government help.

The council approved the plan unanimously with all members present.

Economic Development Director Gale Price acknowledged the plan will have to evolve as the COVID-19 pandemic continues to ebb and flow.

The $100,000 loan program will give businesses up to $5,000 to help with rent, mortgages, paying suppliers or other costs.

Rock County’s emergency loan program requires businesses to have been open at least 12 months, have fewer than 20 employees and provide proof of revenue loss.

Rock County businesses have been allowed to reopen, with recommended restrictions, since the county lifted its safer-at-home order last week. But they face at least 10 weeks of uncertainty as they try to recover revenue they lost while being partially or fully shut down, Price said.

Janesville businesses who participated in the program will be responsible for paying back their loans. Repaid money will be allocated to the city’s downtown revolving loan fund.

Council member Doug Marklein asked what happens if a business closes before it repays the loan.

Price indicated it might be difficult to recover the city’s investment, depending on the business, and the city will recognize that as loan applications are vetted.

Members of the city’s revolving loan committee have volunteered to help vet applications, he said.

Marklein said he supported the recovery plan and loan program. The city should do whatever it can to help businesses that show promise through the economic challenges of the pandemic, he said.

The loan program is not “free money,” which is also why Marklein said he supported it.

Funding for the city’s program will come from Tax Increment Financing District 21, which closed this year.

Amendments can be made to the plan as necessary, he said.

The council previously approved the sale of prepackaged liquor for off-premise consumption temporarily during the city's state of emergency amid the COVID-19 pandemic.

The city's alcohol license advisory committee vetted the ordinance change and made a positive recommendation to the council.

Class B license holders—primarily bars and restaurants—will be allowed to sell prepackaged liquor until 9 p.m., similar to laws for sales at liquor and grocery stores.

City Clerk-Treasurer Dave Godek said the ordinance change does not allow for the sale of mixed drinks for takeout. The liquor must be prepackaged and sealed in its original container. 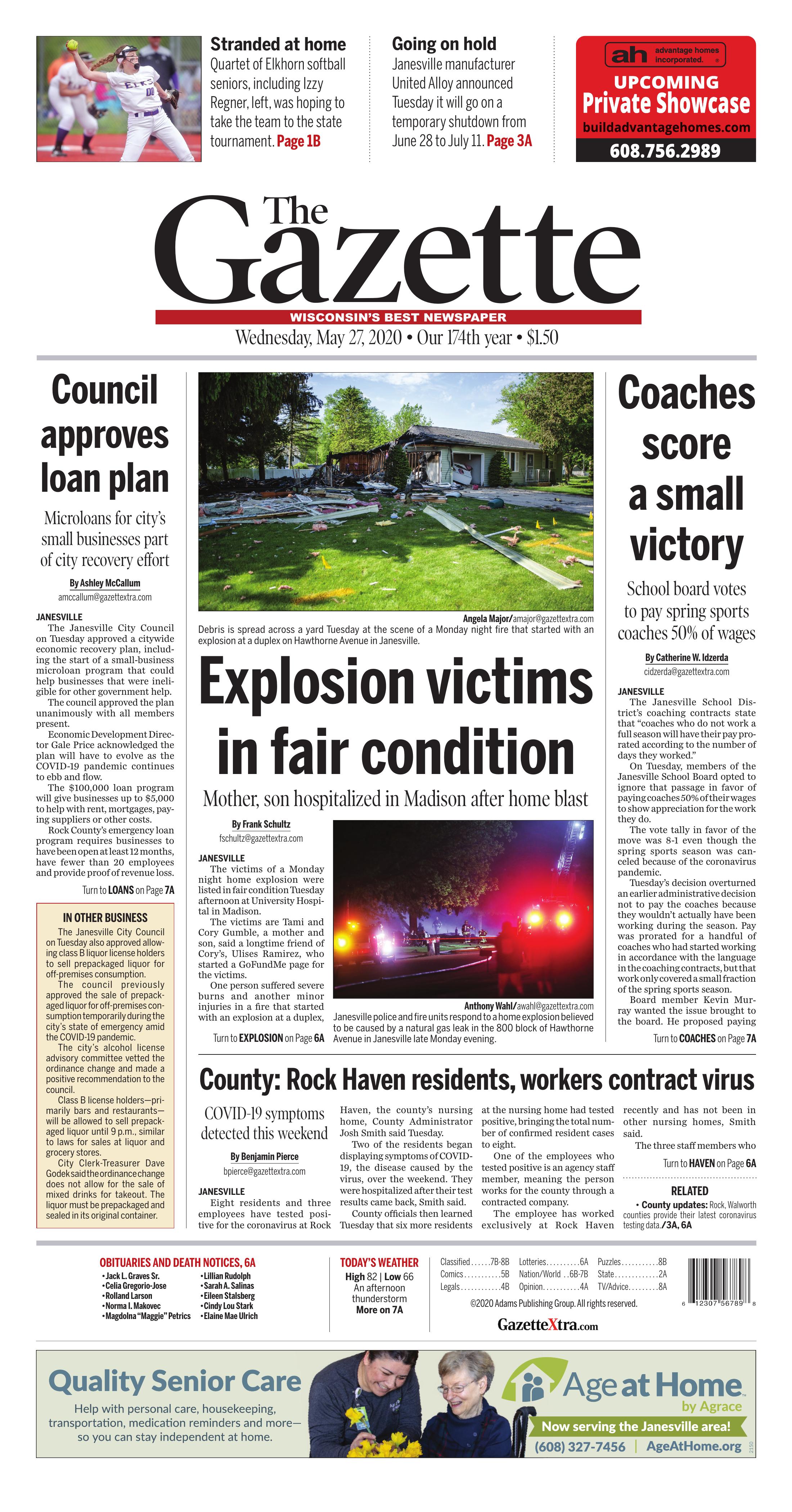