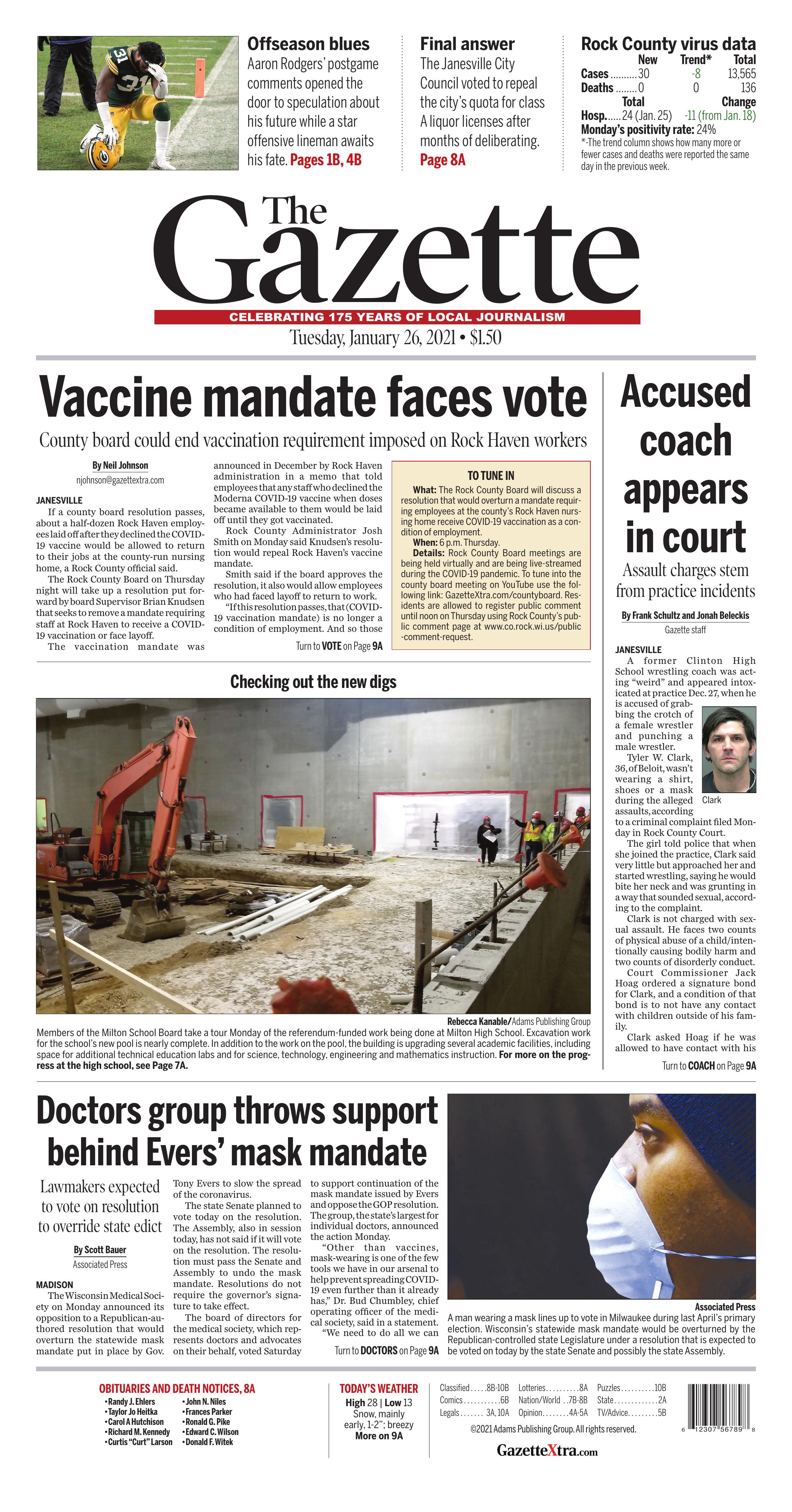 If a county board resolution passes, about a half-dozen Rock Haven employees laid off after they declined the COVID-19 vaccine would be allowed to return to their jobs at the county-run nursing home, a Rock County official said.

The Rock County Board on Thursday night will take up a resolution put forward by board Supervisor Brian Knudson that seeks to remove a mandate requiring staff at Rock Haven to receive a COVID-19 vaccination or face layoff.

The vaccination mandate was announced in December by Rock Haven administration in a memo that told employees that any staff who declined the Moderna COVID-19 vaccine when doses became available to them would be laid off until they got vaccinated.

Smith said if the board approves the resolution, it also would allow employees who had faced layoff to return to work.

“If this resolution passes, that (COVID-19 vaccination mandate) is no longer a condition of employment. And so those staff could be recalled from layoffs,” Smith said.

In all, Smith said, five Rock Haven employees took “voluntary” layoff after they had declined the first round of COVID-19 vaccination when it became available to the nursing home in early January. Smith said Rock Haven has reported that five more workers intend to decline the vaccine when a second wave of doses roll out Feb. 2.

County Administrator Josh Smith said the county has drawn a hard line on vaccination at the county-run nursing home.

The mandate comes despite the county having no formal policy in place for a vaccination requirement, other than a county ordinance that indicates county employees can face layoff if it is determined they can no longer carry out the duties of their jobs.

Rock Haven employees have told The Gazette that some workers at the nursing home have quit their jobs over the mandate, although one employee said most Rock Haven workers have gotten the vaccine.

Some employees—including those who declined the vaccine and some who agreed to receive it—have said they’re concerned about physical reactions some people have reported after getting the vaccine. Others say they’re worried about long-term side effects of a vaccine that was rolled out under federal emergency approval.

The employees spoke to The Gazette on condition of anonymity because they feared they might face retaliation or firing if they spoke publicly about the mandate.

Knudson didn’t immediately return calls and emails from a Gazette reporter, but his draft resolution says that “concerns have been expressed by staff, the public, and county board members” over Rock Haven’s mandate.

If the board approves the measure Thursday, the resolution states “Rock Haven may not require staff to receive any COVID-19 vaccine,” although it notes the county board “highly recommends” the vaccine for all Rock Haven employees.

Despite a decision by Rock County authorities to require COVID-19 vaccination of employees at the county-run nursing home, some private nursing facilities say they’re not enforcing the same mandate.

Smith earlier said the county believes it is legally allowed to have a vaccination mandate at the nursing home, and he said the mandate was made to try to protect Rock Haven's residents, elderly people who health experts say can be particularly at risk for serious illness from COVID-19 infection.

And in an administrative note he added to Knudson's draft resolution, Smith wrote that “the decision on whether to require vaccines of staff is first a clinical assessment of what is in the best interest of residents, but is also weighed against competing interests of staff concerns, liability, and general public policy.”

Some privately-run nursing homes in Janesville told The Gazette earlier this month they’re recommending but not mandating the vaccine for their staffs.

An official at the Walworth County Public Health Department said officials in that county considered a mandate but decided it might have unintended consequences, including some staff quitting at a time when nursing homes can least afford to lose skilled staff.

One Janesville resident on Monday told The Gazette he got an unsigned flyer in his Gazette newspaper tube urging him to contact Rock County Board members and speak out against Rock Haven’s vaccination mandate.

A copy of the flyer obtained by The Gazette claims the county and Rock Haven through its vaccination mandate have “escalated” a local skilled nursing shortage by “firing conscientious staff” who’ve declined what the flyer calls an “unapproved” COVID-19 vaccine.

The flyer is unsigned, and it’s not clear who circulated it. It includes a web link to the U.S. Department of Health and Human Services Vaccine Adverse Event Reporting System and the web address for Children of God for Life, a group that says it opposes the pharmaceutical industry using aborted human fetuses in research, development and production of vaccines.

What: The Rock County Board will discuss a resolution that would overturn a mandate requiring employees at the county’s Rock Haven nursing home receive COVID-19 vaccination as a condition of employment.

Details: Rock County Board meetings are being held virtually and are being live-streamed during the COVID-19 pandemic. To tune into the county board meeting on YouTube use the following link: GazetteXtra.com/countyboard. Residents are allowed to register public comment until noon on Thursday using Rock County’s public comment page at www.co.rock.wi.us/public-comment-request

A former Clinton High School wrestling coach was acting “weird” and appeared intoxicated at practice Dec. 27, when he is accused of grabbing the crotch of a female wrestler and punching a male wrestler.

Tyler W. Clark, 36, of Beloit, wasn’t wearing a shirt, shoes or a mask during the alleged assaults, according to a criminal complaint filed Monday in Rock County Court.

The girl told police that when she joined the practice, Clark said very little but approached her and started wrestling, saying he would bite her neck and was grunting in a way that sounded sexual, according to the complaint.

Clark is not charged with sexual assault. He faces two counts of physical abuse of a child/intentionally causing bodily harm and two counts of disorderly conduct.

Court Commissioner Jack Hoag ordered a signature bond for Clark, and a condition of that bond is to not have any contact with children outside of his family.

Clark asked Hoag if he was allowed to have contact with his fiancée’s children, to which Hoag said no.

Conditions of his bond also include no contact with the victims in the case or Clinton schools. He is also not allowed to coach.

The girl told police Clark forcefully grabbed her crotch for a couple of seconds through her clothing during the practice, according to the complaint. She said it didn’t feel like it was accidental.

The girl said she tried to walk away, but Clark grabbed her and kept her from leaving. She later went to the bathroom, and another wrestler came in, asked her if everything was OK and then took her home, according to the complaint.

Surveillance video confirms Clark wrestled the girl for a few minutes and that she tried to get away several times, but it appears Clark kept her from doing so, the complaint states.

The video shows another incident in which Clark is seen bear-hugging a male wrestler while the boy tries to get away, and then Clark punches the boy in the stomach, according to the complaint.

The boy falls to the floor, and Clark kicks him, according to the complaint.

The boy later confirmed the incident and said Clark kicked him in the head, causing a lump.

The boy said Clark struck him again later in the practice and that Clark usually does “play around” but that Clark was more forceful than usual this time, according to the complaint.

Clark, who was not a staff member at the school, resigned his part-time coaching position the day after the incident, The Beloit Daily News reported.

Clark was a standout wrestler when he attended Beloit Turner High School in the early 2000s. He later wrestled for UW-Madison.

Clark coached at Orfordville Parkview High School before being named head wrestling coach at Clinton in 2016, according to a Beloit Daily News article.

Clark is next set to appear in court at 1 p.m. Wednesday, Feb. 17, for an adjourned initial appearance.

This article was corrected at 4:26 p.m. Monday to reflect that Clark is accused of saying he would bite the girl’s neck.