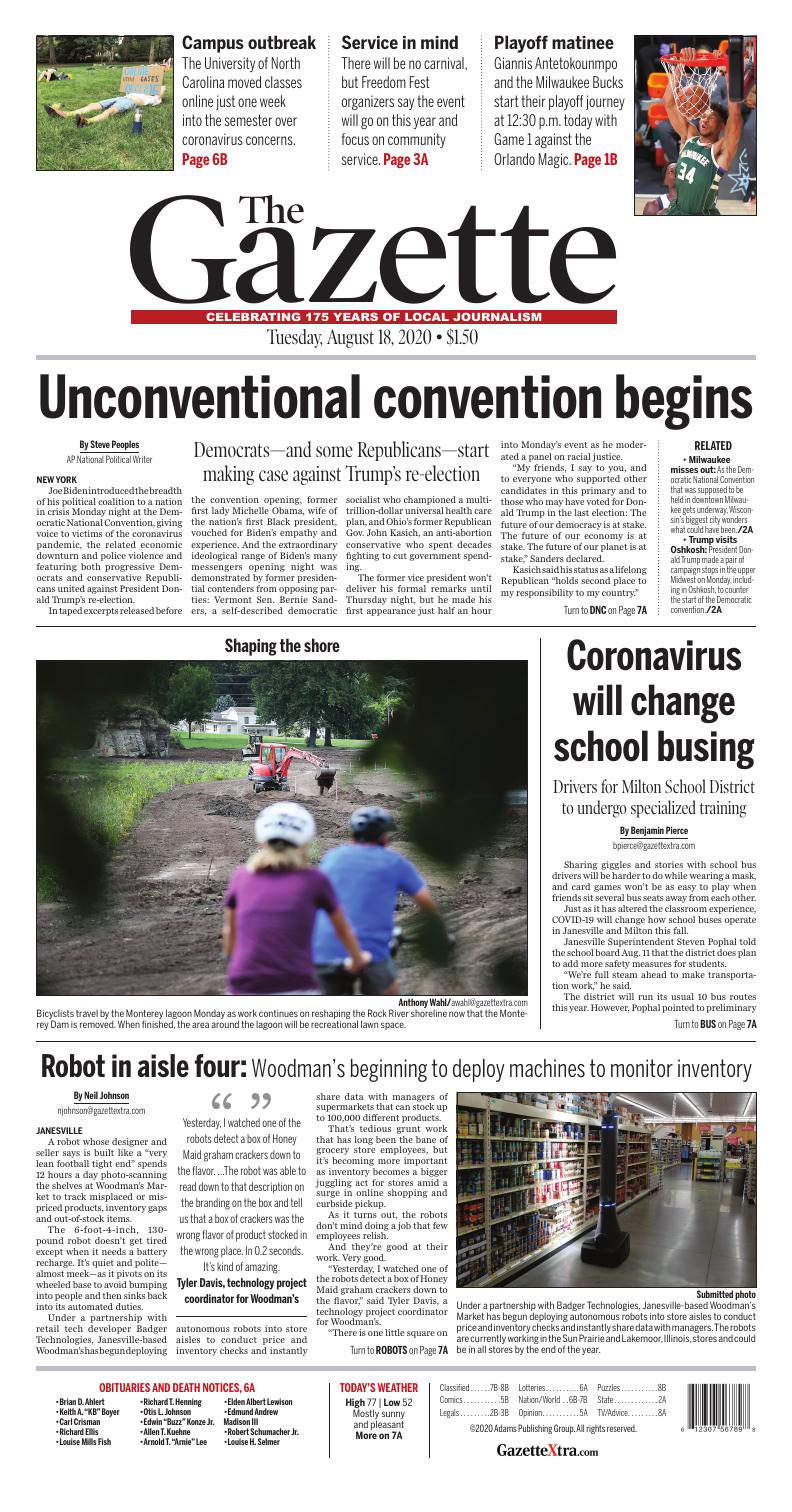 Under a partnership with Badger Technologies, Janesville-based Woodman’s Market has begun deploying autonomous robots into store aisles to conduct price and inventory checks and instantly share data with managers. The robots are currently working in the Sun Prairie and Lakemoor, Illinois, stores and could be in all stores by the end of the year.

A robot whose designer and seller says is built like a “very lean football tight end” spends 12 hours a day photo-scanning the shelves at Woodman’s Market to track misplaced or mispriced products, inventory gaps and out-of-stock items.

The 6-foot-4-inch, 130-pound robot doesn’t get tired except when it needs a battery recharge. It’s quiet and polite—almost meek—as it pivots on its wheeled base to avoid bumping into people and then sinks back into its automated duties.

Under a partnership with retail tech developer Badger Technologies, Janesville-based Woodman’s has begun deploying autonomous robots into store aisles to conduct price and inventory checks and instantly share data with managers of supermarkets that can stock up to 100,000 different products.

That’s tedious grunt work that has long been the bane of grocery store employees, but it’s becoming more important as inventory becomes a bigger juggling act for stores amid a surge in online shopping and curbside pickup.

As it turns out, the robots don’t mind doing a job that few employees relish.

And they’re good at their work. Very good.

“Yesterday, I watched one of the robots detect a box of Honey Maid graham crackers down to the flavor,” said Tyler Davis, a technology project coordinator for Woodman’s.

“There is one little square on a Honey Maid graham cracker box that says it’s cinnamon-flavored or it’s low fat or whatever flavor. The robot was able to read down to that description on the branding on the box and tell us that a box of crackers was the wrong flavor of product stocked in the wrong place. In 0.2 seconds. It’s kind of amazing.”

Badger’s shelf-scanning robots are slated to roll out in five Woodman’s stores within a few months, and they might be in all locations—including Janesville—by the end of this year, said Clint Woodman, president of Woodman’s Market.

Woodman said customers are still getting used to seeing the robots at the stores in Sun Prairie and Lakemoor, Illinois, where they’ve been deployed.

“Initially, the customers look at and wonder what the heck is it doing?” Woodman said. “Some people think that it’s a security robot, you know, that’s watching them. But that’s not at all the case. It’s actually at work, going about its tasks.”

Woodman and Davis say the robot and its companion technology allow Woodman’s to track—at any time of day or night—which items are out of stock, which items found their way onto the wrong shelves, and which must be replenished more frequently.

It takes a long time for employees to do such inventory work, and most dislike the job, Woodman said, because it’s “tedious and mundane.”

But it’s become a more important consideration as grocery stores have had to manage the effects of the COVID-19 pandemic on their in-store stock and supply chain.

The pandemic notwithstanding, grocery stores have begun dramatic shifts in how they serve customers. They now cater to a mix of in-store customers and third-party shelf-pickers who fulfill online and curbside orders for customers who prefer not to shop in person.

That makes technology that can meticulously check shelves for product gaps more valuable and useful, Woodman and Davis said.

If you’re looking for one of Woodman’s new robots, don’t expect to see an android similar to “Star Wars’” gold-colored C-3PO ambling around the aisles in a red grocer’s apron. Badgers’ robots don’t look humanoid.

They’re actually a self-propelled set of sensors and cameras set on a pole-like structure that’s tall enough to scan 7-foot grocery shelves from top to bottom.

Shaped like a stovepipe, they’re featureless, sleek and matte gray, with a blue beacon to help shoppers notice their approach.

The robots use light-sensitive sonar sensors to detect people nearby. If a shopper is close, the robot will move out of the way and focus on a different task in the aisle. It’s a bit of hardwired supermarket etiquette that Badger Technologies CEO Tim Rowland calls “courtesy and politeness.”

In the past few years, Woodman’s has experimented with self-scanning checkout and automatic checkout scanners.

Woodman said such technological changes in stores, including the use of robots, aren’t maneuvers to replace human employees with automated technology.

“These advancements make our employees available to do other, higher-priority things in the store,” Woodman said. “No one is losing their job over it.”

Sharing giggles and stories with school bus drivers will be harder to do while wearing a mask, and card games won’t be as easy to play when friends sit several bus seats away from each other.

Just as it has altered the classroom experience, COVID-19 will change how school buses operate in Janesville and Milton this fall.

Janesville Superintendent Steven Pophal told the school board Aug. 11 that the district does plan to add more safety measures for students.

“We’re full steam ahead to make transportation work,” he said.

The district will run its usual 10 bus routes this year. However, Pophal pointed to preliminary enrollment numbers that indicate 30% of students have chosen to attend ARISE Virtual Academy, which will reduce the number of kids on buses and allow for social distancing.

School buses will be disinfected and wiped down each day, and masks will be required. District officials have identified one route that has higher ridership and are considering adding an additional row of seats to ensure proper distancing.

The district is also in talks with city officials about safe procedures for students who take city buses to school.

Pophal said parents will have to take their children’s temperatures and run through screening questions before sending students to school. It’s a different routine but a necessary one, he said.

“Moms and dads, I remember when my kids were little,” he said. “I remember how busy I was at my house in the morning, and I remember how one more thing to do, even if it only took a minute or two might feel like, ‘I just don’t have time for this.’ But that’s what we’re going to have to ask people to do.”

The Milton School District contracts with Go-Riteway Transportation Group for busing. The company and school district have created these guidelines for buses:

Milton bus drivers will wear masks and undergo COVID-19 training on exposure risks, proper sanitation and other safety precautions. A coronavirus precaution poster will be displayed in each bus.

Drivers will sanitize high-touch areas such as railings and the tops of seats after each route. All buses will have hand sanitizer, and drivers will clean frequently throughout the day.

The company is using a battery-operated electrostatic sprayer to dispel a disinfectant fog, which is attracted to the bus seats and dries quickly in place. The fog settles in cracks and helps ensure better cleaning over broad areas, Kolo said.

“It seems to us to be an effective means of covering a surface thoroughly,” he said.

At the Janesville School Board meeting, Pophal stressed the need for a partnership with parents.

“One of the things you’re going to see for all of us moving forward is we’re all going to have to behave differently,” he said. “... This virus is here to stay. So if we want to be able to get out of our rabbit holes and to have whatever the new normal life is that we can resume so that we balance safety with our ability to live life, then we all have to be willing—behaviorally—to make some changes.” 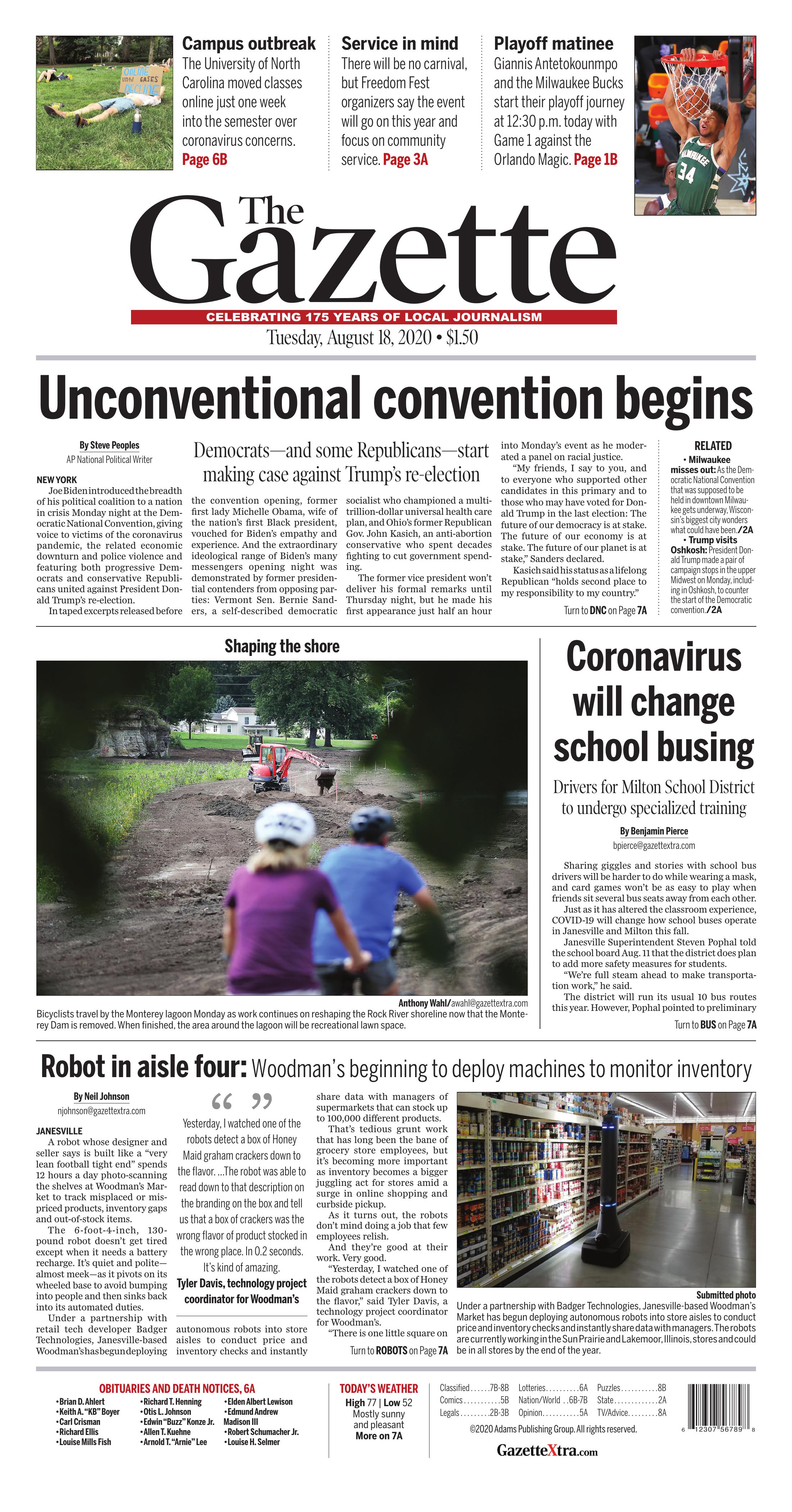