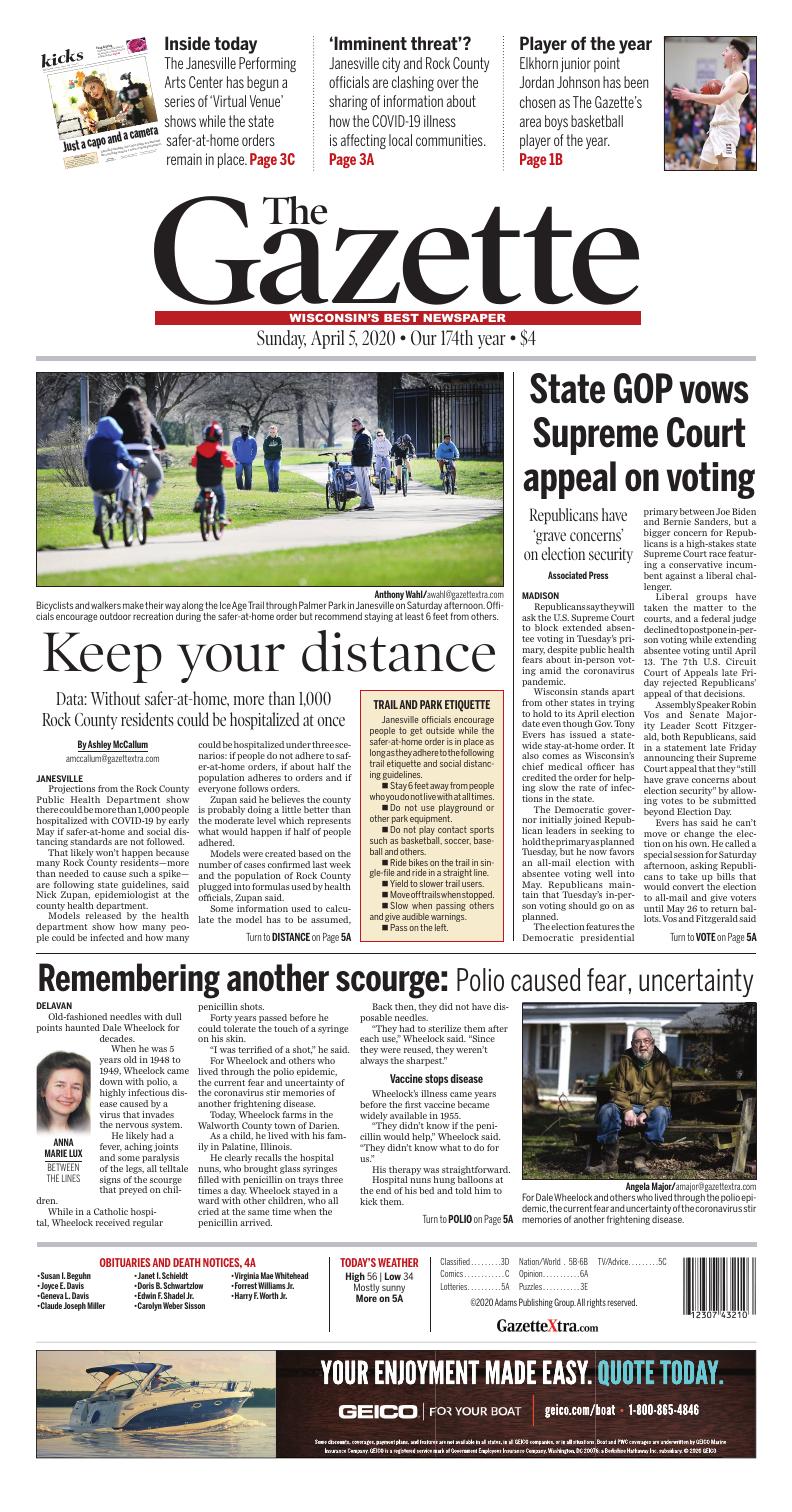 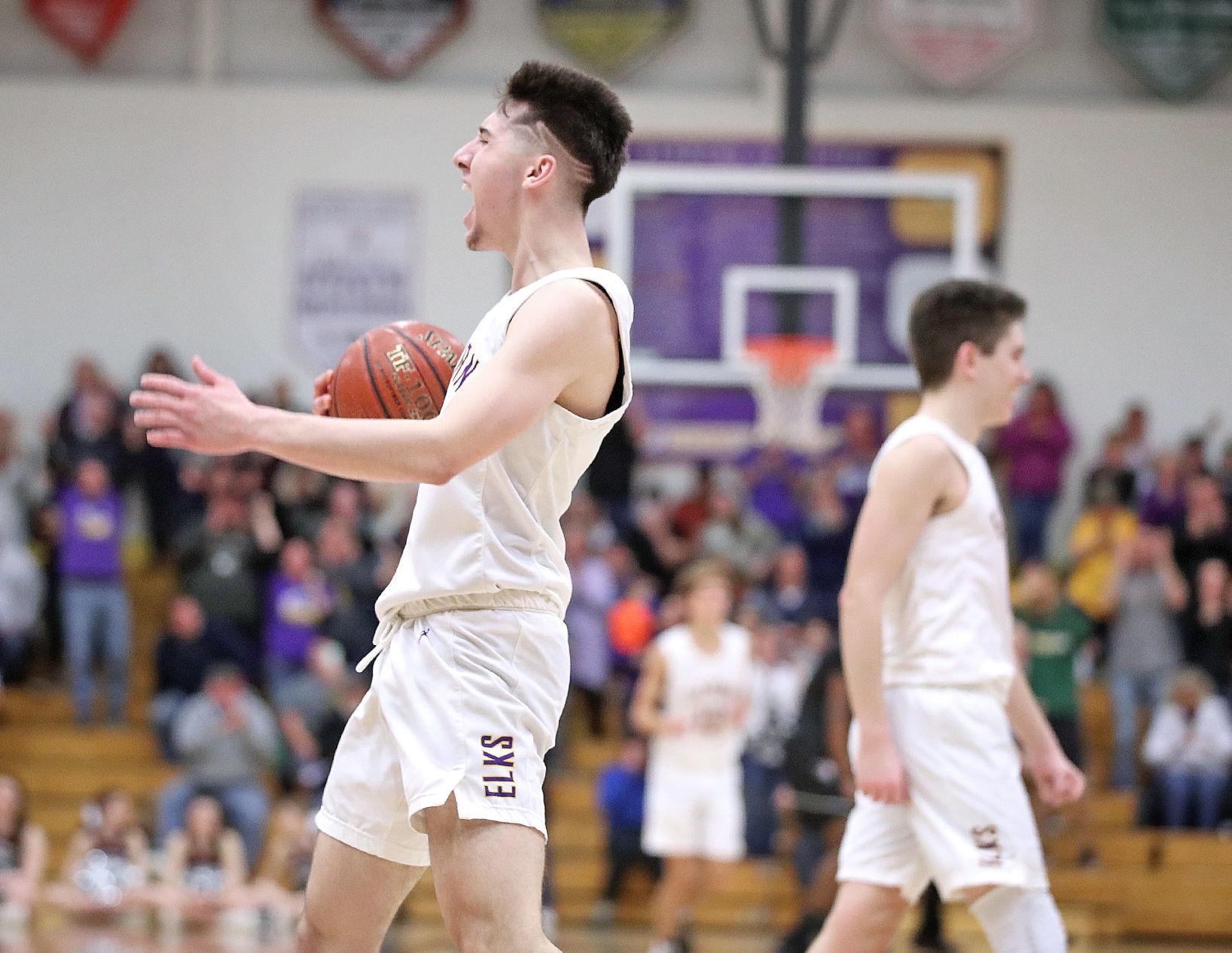 Coronavirus
Data: Without safer-at-home, more than 1,000 Rock County residents could be hospitalized at once
By Ashley McCallum amccallum@gazettextra.com

Bicyclists and walkers make their way along the Ice Age Trail through Palmer Park in Janesville on Saturday afternoon. Officials encourage outdoor recreation during the safer-at-home order but recommend staying at least 6 feet from others. Models released by the health department show how many people could be infected and how many could be hospitalized if people do not adhere to safer-at-home orders.

Projections from the Rock County Public Health Department show there could be more than 1,000 people hospitalized with COVID-19 by early May if safer-at-home and social distancing standards are not followed.

That likely won’t happen because many Rock County residents—more than needed to cause such a spike— are following state guidelines, said Nick Zupan, epidemiologist at the county health department. 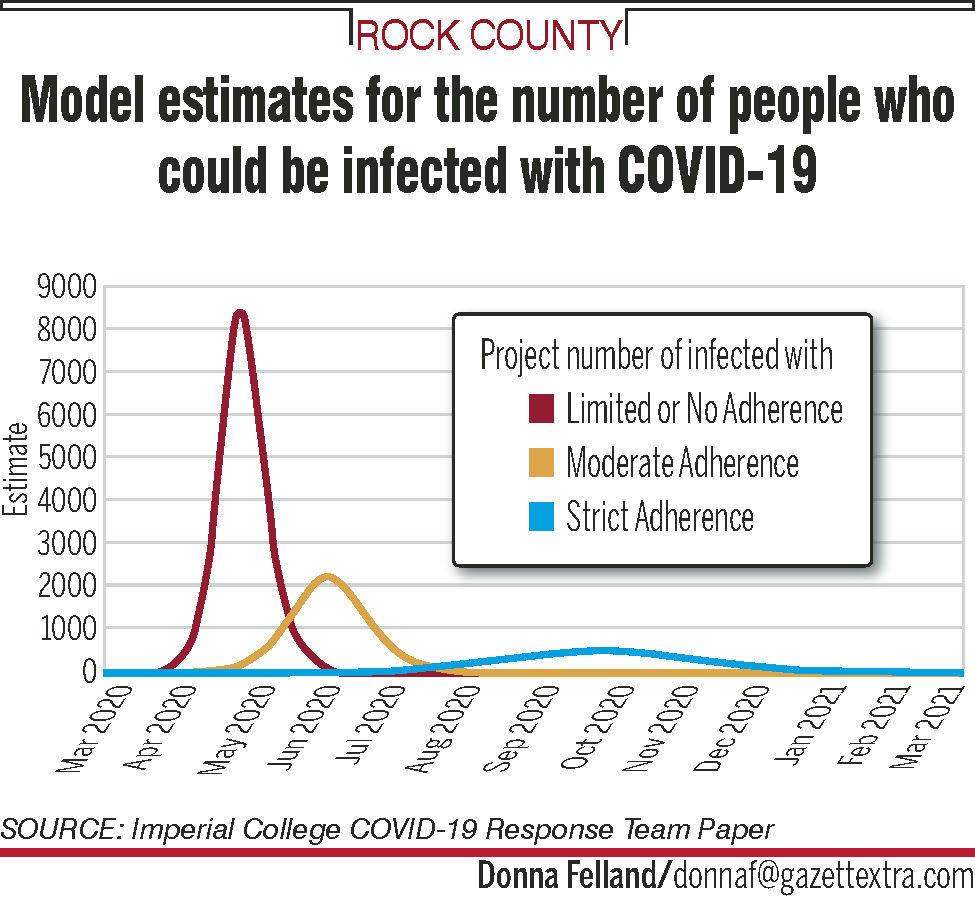 Models released by the health department show how many people could be infected and how many could be hospitalized under three scenarios: if people do not adhere to safer-at-home orders, if about half the population adheres to orders and if everyone follows orders.

Zupan said he believes the county is probably doing a little better than the moderate level which represents what would happen if half of people adhered.

Models were created based on the number of cases confirmed last week and the population of Rock County plugged into formulas used by health officials, Zupan said.

Some information used to calculate the model has to be assumed, therefore it is not a pinpoint accurate prediction, Zupan said.

Models use national information, which assumes 12% of people who test positive for COVID-19 will require hospitalization and 30% of those hospitalized will need critical care, according to the health department’s website.

There is some guess work in the formulas as far as how infectious the disease is because COVID-19 is caused by a new kind of coronavirus which scientists are still learning more about.

Models from the health department show the following:

The models did not account for how long people would be following safer-at-home guidelines, Zupan said.

This data is used to show the public how quickly COVID-19 could spread across the community, Zupan said.

It is not being used to determine how long safer-at-home orders should be in place, Zupan said.

Police are still seeing neighborhood kids and teenagers hanging out in groups around town, Sheridan said.

State officials advise against hanging out with people who do not live in the same home—even in small groups.

Gov. Tony Evers when he announced the safer-at-home order said people should not have sleepovers or host dinner parties.

The Rock County Public Health Department says everyone should assume everyone else in infected, even if they do not show symptoms.

People should not be playing contact sports, such as basketball, with friends or using playground equipment at parks, Sheridan said.

If police are notified of groups of 10 or more people, they will respond and tell people to disperse, Sheridan said,

People can be ticketed or arrested if they refuse to adhere to safer-at-home guidelines. Police hope to not have to take such enforcement efforts, Sheridan said.

Janesville officials encourage people to get outside while the safer-at-home order is in place as long as they adhere to the following trail etiquette and social distancing guidelines.

For Dale Wheelock and others who lived through the polio epidemic, the current fear and uncertainty of the coronavirus stir memories of another frightening disease.

When he was 5 years old in 1948 to 1949, Wheelock came down with polio, a highly infectious disease caused by a virus that invades the nervous system.

He likely had a fever, aching joints and some paralysis of the legs, all telltale signs of the scourge that preyed on children.

While in a Catholic hospital, Wheelock received regular penicillin shots.

Forty years passed before he could tolerate the touch of a syringe on his skin.

“I was terrified of a shot,” he said. 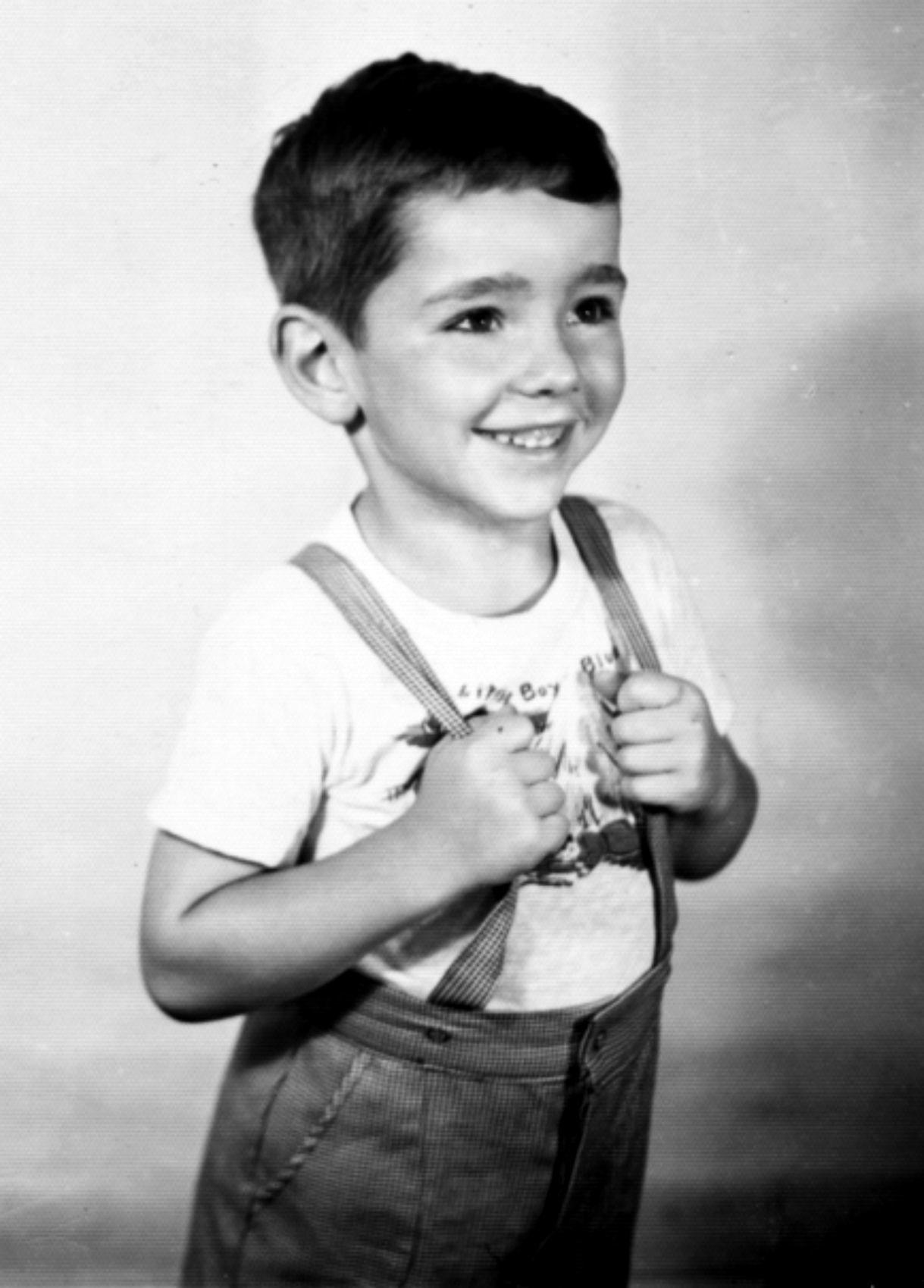 A 4-year-old Dale Wheelock is shown in this photo before he contracted polio in 1948-1949.

For Wheelock and others who lived through the polio epidemic, the current fear and uncertainty of the coronavirus stir memories of another frightening disease.

Today, Wheelock farms in the Walworth County town of Darien.

As a child, he lived with his family in Palatine, Illinois.

He clearly recalls the hospital nuns, who brought glass syringes filled with penicillin on trays three times a day. Wheelock stayed in a ward with other children, who all cried at the same time when the penicillin arrived.

Back then, they did not have disposable needles.

“They had to sterilize them after each use,” Wheelock said. “Since they were reused, they weren’t always the sharpest.”

His therapy was straightforward.

Hospital nuns hung balloons at the end of his bed and told him to kick them.

“They thought it would keep my legs going,” Wheelock said.

Wheelock does not remember how his parents reacted when they learned he had polio. He guesses they were terrified, like so many parents, about what would happen to their child.

“Everyone was nervous about polio,” he said.

Wheelock especially recalls being frightened when he saw children in iron-lung machines.

With only their heads sticking out, they rested on beds inside the massive mechanical respirators.

Iron lungs enabled patients to breathe when the virus paralyzed muscles in their chests.

“They would lay flat and had a mirror over them so they could see when people came up and talked to them,” Wheelock said. “The iron lungs freaked me out. I never wanted to be in one of them.”

Unlike some children, the disease did not affect the use of his legs. Instead, it left him with partial use of his left arm.

He started first grade after having polio.

“I came in sometime after school began,” Wheelock remembers. “The kids avoided me until the teacher convinced them I wasn’t contagious.”

One neighbor boy wouldn’t let Wheelock off the bus at his stop.

“The bus driver helped me get past the kid,” he said. “I told my dad when I got home, and we went right to the neighbor’s house. My dad explained to the other father what would happen if this continued.”

As they left, the elder Wheelock turned and told the neighbor his son is handicapped.

“That was the first time I heard the word,” Wheelock said. “I didn’t like it then, and I don’t like it now.”

He knew other children with paralysis much worse than his.

“Some had an awful time walking,” Wheelock said.

The worst polio year on record was 1952, when more than 57,000 cases were reported, according to the Wisconsin Historical Society.

Newspaper reports from the period show that one of Rock County’s worst polio epidemics in 1950 left at least five people dead among 38 cases.

At the time and during other outbreaks, Janesville officials closed movie theaters, swimming pools and beaches in an attempt to thwart the disease. Worried parents kept their children inside during the summer, even when they begged to go out.

Sometimes, children disappeared from school. Later, they reappeared using crutches or in wheelchairs. Others did not survive one of the most dreaded diseases of the 20th century.

In 1954, Rock County children were among 1.8 million in the United States to take part in polio-vaccine trials.

Then, in spring 1955, Jonas Salk and his team of researchers announced they had developed a vaccine to conquer the disease.

The news brought rejoicing 65 years ago this month.

No longer would the specter of paralysis or death haunt fearful families.

With the United States being polio free for many years, people who were unaffected by the disease have largely forgotten.

But for people such as Wheelock, polio will never slip from memory.

He often wonders what he would be today if he had not gotten polio and a weak arm.

“It made me an overachiever to prove a point,” he said. “I had to prove that I could be as good as everyone else.”

Anna Marie Lux is a Sunday columnist for The Gazette. Call her with ideas or comments at 608-755-8264 or email amarielux@gazettextra .com. 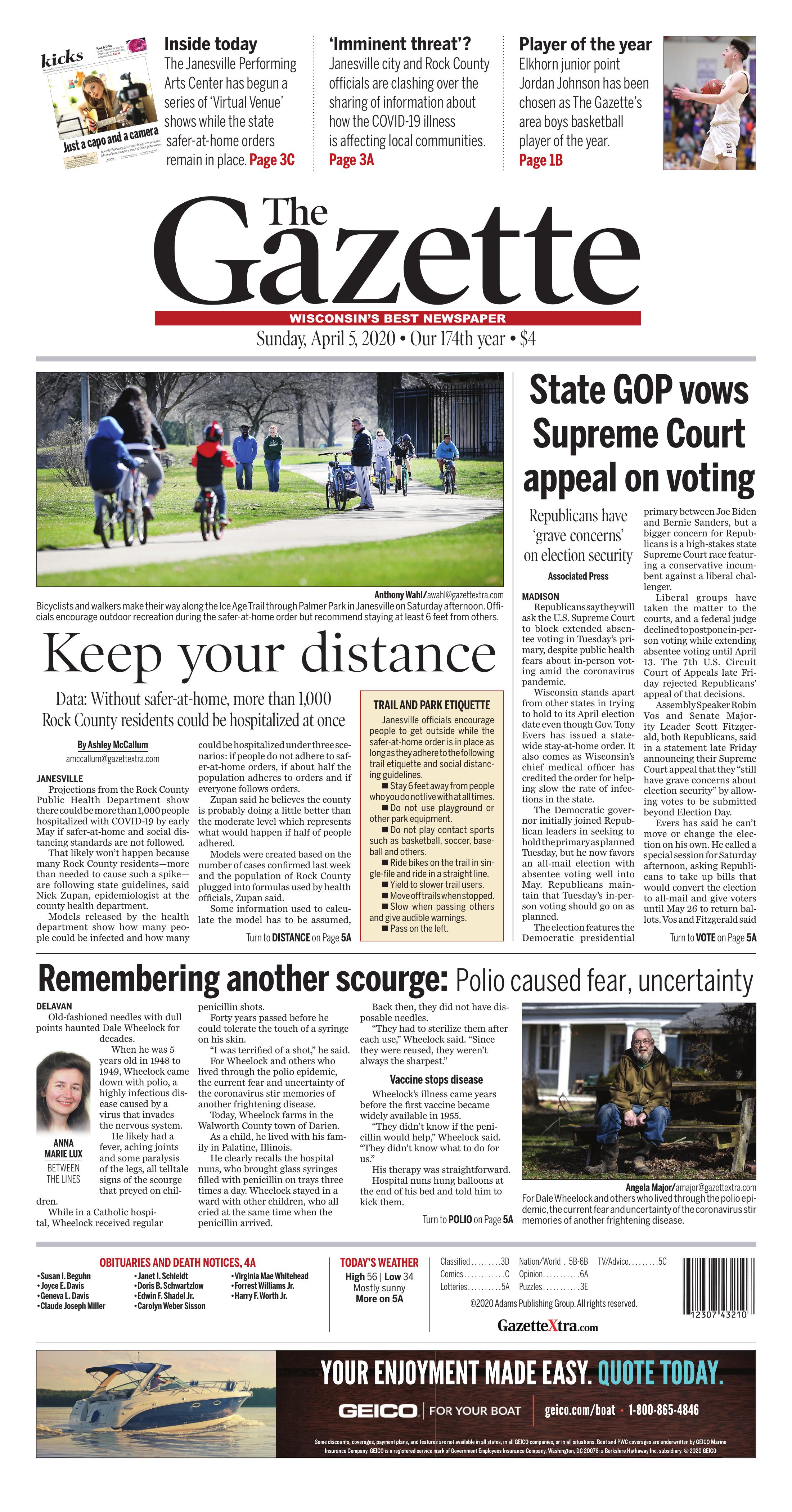