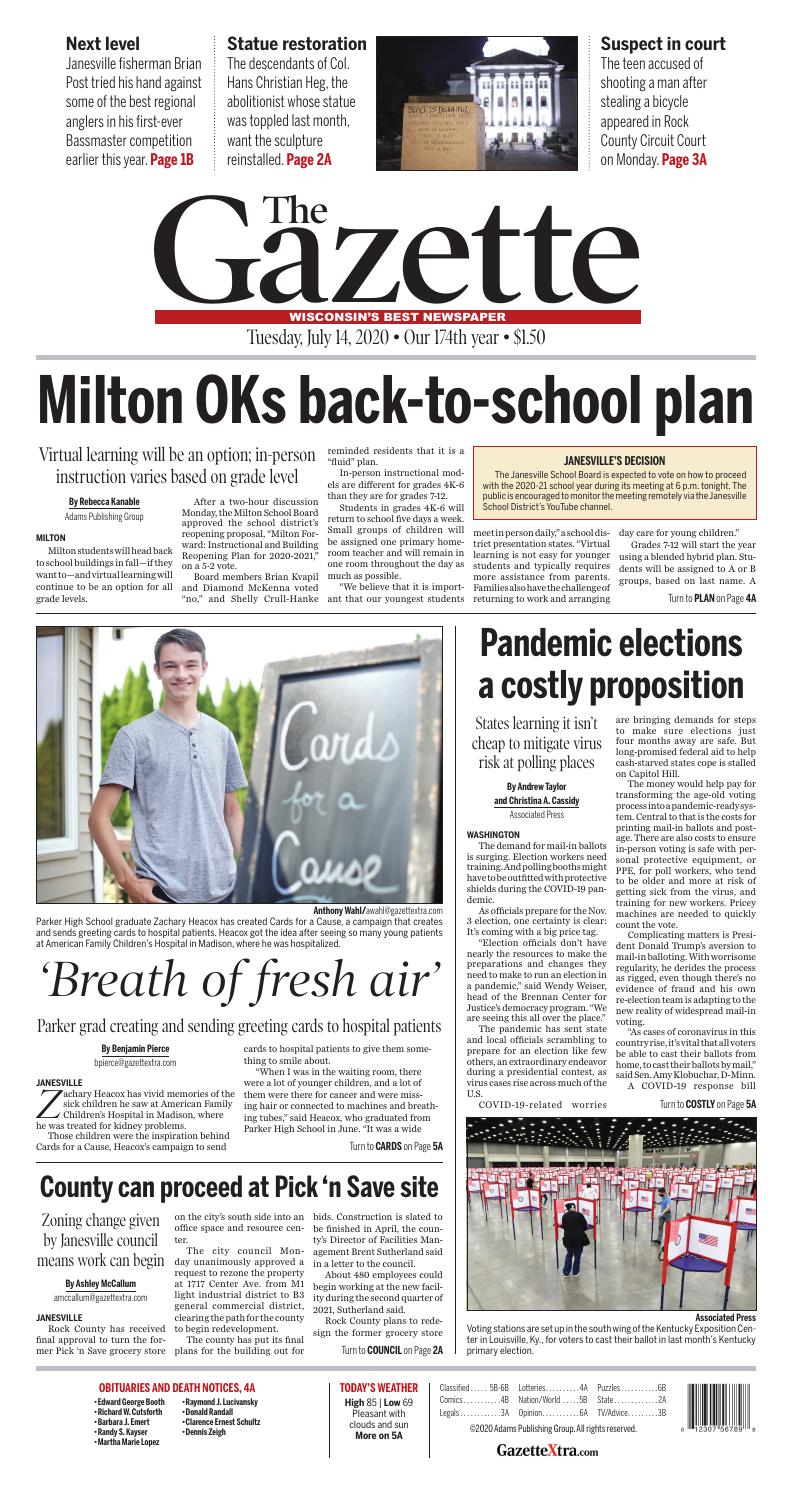 Milton students will head back to school buildings in fall—if they want to—and virtual learning will continue to be an option for all grade levels.

After a two-hour discussion Monday, the Milton School Board approved the school district’s reopening proposal, “Milton Forward: Instructional and Building Reopening Plan for 2020-2021,” on a 5-2 vote.

Board members Brian Kvapil and Diamond McKenna voted “no,” and Shelly Crull-Hanke reminded residents that it is a “fluid” plan.

In-person instructional models are different for grades 4K-6 than they are for grades 7-12.

Students in grades 4K-6 will return to school five days a week. Small groups of children will be assigned one primary homeroom teacher and will remain in one room throughout the day as much as possible.

“We believe that it is important that our youngest students meet in person daily,” a school district presentation states. “Virtual learning is not easy for younger students and typically requires more assistance from parents. Families also have the challenge of returning to work and arranging day care for young children.”

Grades 7-12 will start the year using a blended hybrid plan. Students will be assigned to A or B groups, based on last name. A and B will alternate days with in-person lessons one day and virtual lessons the other.

Once a week, all students will be dismissed early to allow for teacher planning.

Virtual instruction will include lessons taught live by teachers and work that students do on their own.

In opposing the plan, McKenna said parent and staff surveys show families want students to be in school.

“No way do I think I would have been successful managing half my schooling at home on my own in seventh grade,” she said.

Kvapil also expressed concern about part-time virtual learning for middle and high school students, saying it would stunt students’ educational growth. He also suggested temperatures of staff and students be taken at school.

The district’s next steps include emailing a virtual learning sign-up sheet to families to determine which students will opt to do virtual-only learning.

The district also must consider transportation.

“We would encourage families to provide their own transportation if possible because that lessens the number of students on buses,” Superintendent Rich Dahman said. “We also know that’s not a possibility for every family.”

Protective measures for all grades include extra cleaning and sanitizing of shared spaces, staff and student use of face coverings, and staggered student drop-offs. Younger students will have staggered recess times, and older students’ hallways will be limited to one-way traffic.

“There’s still plenty of uncertainty for when the school year starts this fall,” Dahman said in an earlier interview.

He also acknowledged there are competing messages about COVID-19.

“Rather than us trying to wade through them,” he said, “we listen to national, state and local health officials and put a lot of weight into their recommendations.”

On Monday, Rock County remained in phase two of its reopening plan. The school district’s plan assumes the county still will be in phase two about two months from now.

“We understand that what we’re putting together isn’t something that we’re going to be tied to for a considerable amount of time if the situation changes,” Dahman said.

If a major virus outbreak occurs or the county returns to phase one, all grades would move to virtual learning.

If the county advances to phase three, all students would return to a regular school schedule. Virtual learning would continue to be an option.

Parker High School graduate Zachary Heacox has created Cards for a Cause, a campaign that creates and sends greeting cards to hospital patients. Heacox got the idea after seeing so many young patients at American Family Children’s Hospital in Madison, where he was hospitalized.

Zachary Heacox has vivid memories of the sick children he saw at American Family Children’s Hospital in Madison, where he was treated for kidney problems.

Those children were the inspiration behind Cards for a Cause, Heacox’s campaign to send cards to hospital patients to give them something to smile about.

“When I was in the waiting room, there were a lot of younger children, and a lot of them were there for cancer and were missing hair or connected to machines and breathing tubes,” said Heacox, who graduated from Parker High School in June. “It was a wide variety of kids there for different reasons.

“At that point in time, I wasn’t really thinking about my future. But after that, I kind of realized I did like the health career thanks to the nurses and doctors I met. I decided to start volunteering at Mercy to see if I enjoyed it, and from there, I liked volunteering and decided to make these cards as a way to keep giving back,” he said.

Heacox and some friends created cards for hospitalized children around holidays such as Christmas, New Year’s Eve and Valentine’s Day. He now hopes to expand the project to involve more people.

“I decided through all of this coronavirus stuff I wanted to try to find a way to deliver cards to people during this uncertain time and help,” he said. “I know when people are in the hospital, friends or family can send get-well cards, so I thought it might help. It kind of just seemed like a good idea.”

Madison’s children’s hospital isn’t accepting cards during the pandemic, but Heacox is continuing his project locally. He is working with Mercyhealth officials in Janesville to organize card delivery and is trying to add SSM Health-St. Mary’s Hospital and Fort Atkinson providers, too.

Heacox began volunteering at Mercyhealth Hospital and Trauma Center last summer, but he said he wants to do something when he can’t physically be there.

Heacox said he is making arrangements with Mercyhealth. He said the cards will be delivered to the hospital in a big box, and nurses will distribute them.

Jill Ayres, volunteer manager of the Mercyhealth Association of Volunteers, said the cards currently are distributed through the hospital’s Meals on Wheels program, which provides meals for the elderly or disabled in their homes.

“This is something that’s been absolutely wonderful because I have received many calls from our subscribers saying they received a special card with their meal, and they were thrilled by it,” she said.

When young people such as Heacox donate time to do something nice, it makes a big difference in patients’ lives, Ayres said.

“It’s a breath of fresh air to see these young students, with how busy they are with their own schedules, to take the time to do something like this,” Ayres said.

Heacox said the project at first aimed to help children, but Mercyhealth doesn’t have a lot of young patients. Cards are now being made for patients of all ages, he said.

With more help, the project could make a bigger impact, Heacox said.

“Only a few people can do so much,” he said. “I think if a few people work together in the community, we can make more cards and affect more people in the long run.”

Those looking to donate or send cards can visit a website created by Heacox that shares more about the project.

The website offers a few ground rules. Cards should not be addressed to a specific person or include the sender’s last name or personal information. Illness-related comments, such as “get well,” are discouraged because some patients suffer from terminal conditions.

Both homemade and store-bought cards with uplifting messages are acceptable, Heacox said. However, people should refrain from making religious comments.

Heacox plans to attend UW-La Crosse this fall. While he hasn’t decided on a major, he said his experiences make it likely he’ll choose a health care field.

For more information about Cards for a Cause, visit zacharyheacox.wixsite.com/cardsforacause/about_us.

The empty Pick ‘n Save store on the south side of Janesville is shown in the dwindling light of a March sunset.

Rock County has received final approval to turn the former Pick ‘n Save grocery store on the city’s south side into an office space and resource center.

The city council Monday unanimously approved a request to rezone the property at 1717 Center Ave. from M1 light industrial district to B3 general commercial district, clearing the path for the county to begin redevelopment.

The county has put its final plans for the building out for bids. Construction is slated to be finished in April, the county’s Director of Facilities Management Brent Sutherland said in a letter to the council.

About 480 employees could begin working at the new facility during the second quarter of 2021, Sutherland said.

Rock County plans to redesign the former grocery store to house many county services, including its human services department, the job center and the council on aging.

Currently, county services are housed in several facilities. The consolidation is designed to reduce operational costs for the county and provide improved services to residents, Sutherland said.

The 144,000-square-foot building will also hold a clinic, pharmacy and fitness center, among other resources.

The site will include a bus stop with service from the transit systems in Janesville and Beloit. Many of the county’s clients rely on public transportation, Sutherland said.

Council member Jim Farrell said he saw the plan as a step toward revitalizing the city’s south side.

Farrell had questions about the availability of parking. City Planning Director Duane Cherek said the site had more than enough parking as dictated by city ordinance.

No other members of the public spoke on the matter during a public hearing.

Janesville Area Convention and Visitors Bureau Executive Director Christine Rebout on Monday said the city is doing better than she expected with hotel occupancy, although the pandemic has certainly hit the area's tourism and hospitality sector.

Rebout gave her annual midyear report to the city council Monday night. She noted the successes of 2019 and the shift in priorities for 2020 amid the pandemic.

In 2019, Janesville saw a 1.6% increase in visitor spending, with 1,219 jobs sustained because of tourism and hospitality, Rebout said.

The coronavirus pandemic has forced the bureau to shift to a supporting role for businesses.

Rebout said her goal is for no Janesville business to close because of the pandemic, and so far that goal has been met.

Hotel room occupancy in the city is lower than usual but was hovering at around 30% a month or so ago, which is better than predicted, Rebout said.

The city's extended-stay hotel helps the occupancy rate because it houses workers who have remained employed such as construction workers and physicians, Rebout said. 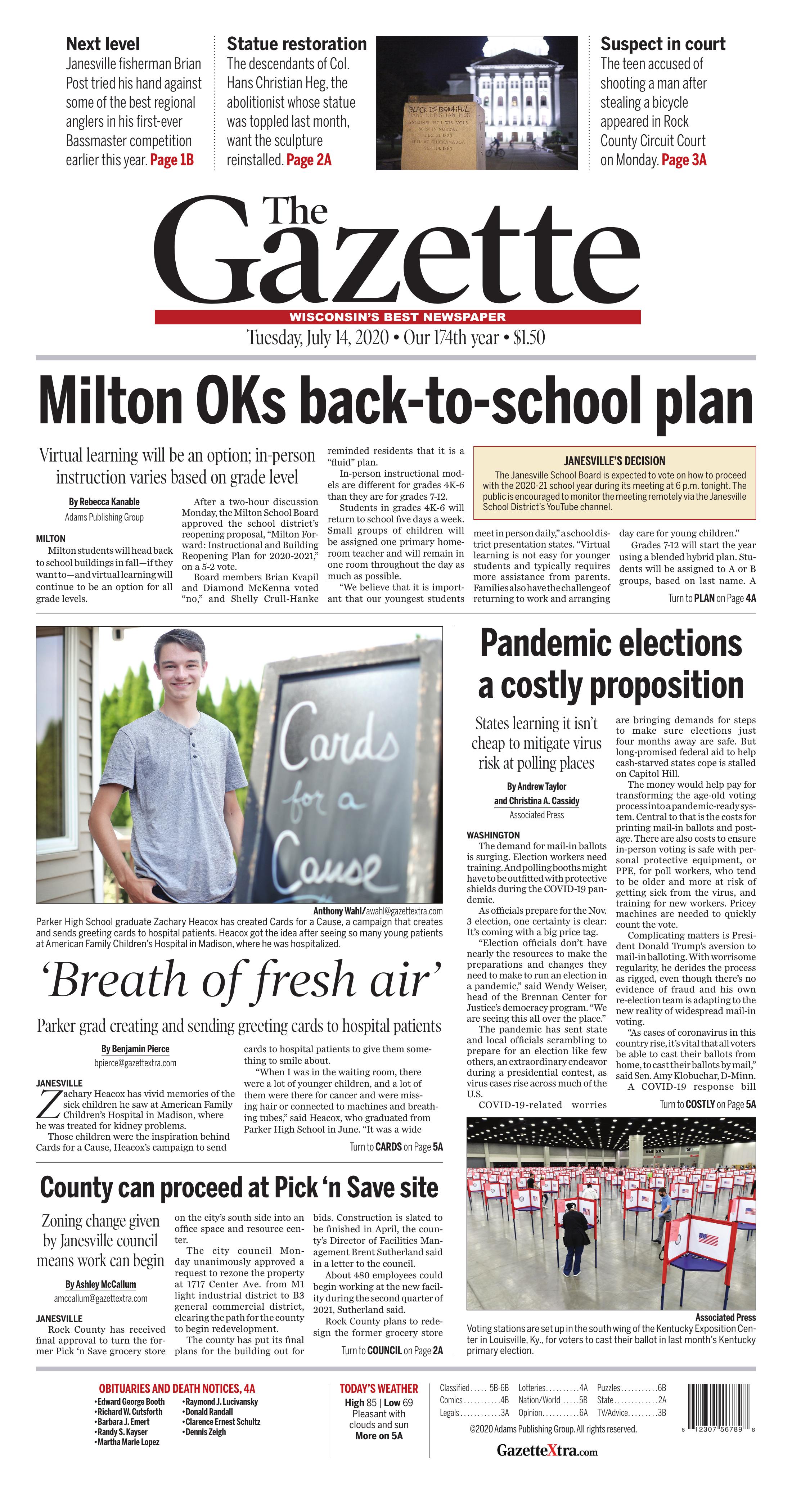