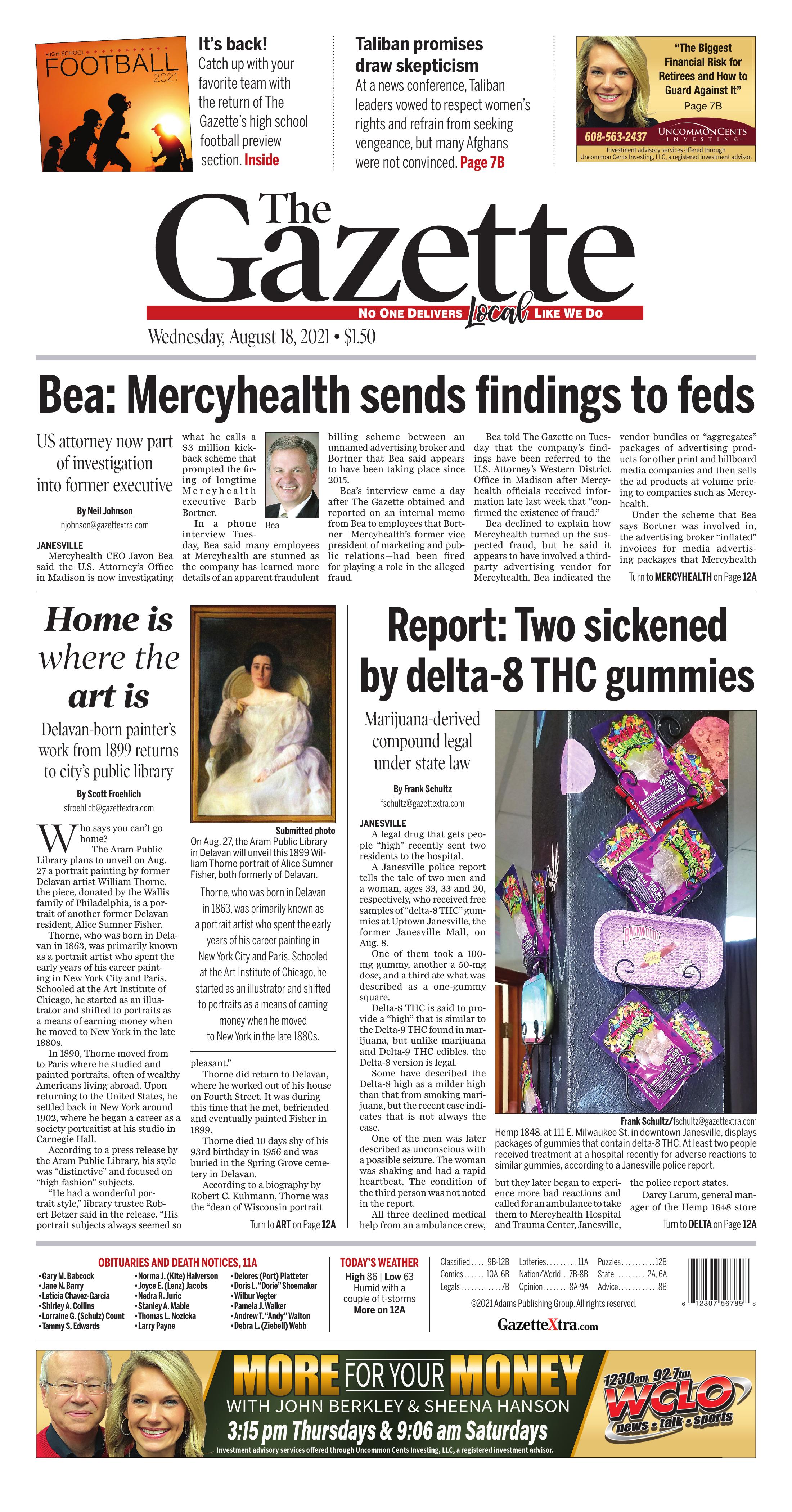 In a phone interview Tuesday, Bea said many employees at Mercyhealth are stunned as the company has learned more details of an apparent fraudulent billing scheme between an unnamed advertising broker and Bortner that Bea said appears to have been taking place since 2015.

Bea’s interview came a day after The Gazette obtained and reported on an internal memo from Bea to employees that Bortner—Mercyhealth’s former vice president of marketing and public relations—had been fired for playing a role in the alleged fraud.

Bea told The Gazette on Tuesday that the company’s findings have been referred to the U.S. Attorney’s Western District Office in Madison after Mercyhealth officials received information late last week that “confirmed the existence of fraud.”

Bea declined to explain how Mercyhealth turned up the suspected fraud, but he said it appears to have involved a third-party advertising vendor for Mercyhealth. Bea indicated the vendor bundles or “aggregates” packages of advertising products for other print and billboard media companies and then sells the ad products at volume pricing to companies such as Mercyhealth.

Under the scheme that Bea says Bortner was involved in, the advertising broker “inflated” invoices for media advertising packages that Mercyhealth bought. Bea said Mercyhealth believes Bortner signed off on the allegedly fraudulent invoices, which resulted in Mercyhealth paying outsized rates for advertising.

Bea said Mercyhealth believes Bortner received financial “kickbacks”—payments to her from the vendor which shared a portion of profits generated through the allegedly inflated advertising billings.

Bea declined to name the vendor Mercyhealth believes was involved, but he said the so-called scheme appears to have spanned at least five years.

Along with launching a third-party audit of its marketing and invoicing practices, Mercyhealth is now severing ties with the vendor.

It’s not clear how many allegedly fraudulent billings Mercyhealth paid out, but Bea said a Mercyhealth employee with Bortner’s executive authority typically would be allowed to sign off on $10,000 in invoices at any given time.

Bea said that means the alleged scheme likely would have had to roll out over a long period for Mercyhealth to amass $3 million in losses. He called such fraudulent practices “not uncommon,” but he said it’s the first time the company has been experienced such a financial loss.

In similar schemes, Bea said it’s common to “have two people, including one on the outside, one on the inside.”

A spokeswoman for the U.S. Attorney’s Western Wisconsin District office on Tuesday said the federal law enforcement agency doesn’t comment on ongoing investigations or cases. She said she could neither confirm nor deny whether the U.S. Attorney was looking into fraud at Mercyhealth.

Bea said he has not heard an update from the U.S. Attorney’s office on Mercyhealth’s complaint of fraud.

Bea said it’s possible some of the media outfits that had sold advertising products through the vendor are local companies. But he said if the alleged fraud was similar to other kickback schemes he has heard of that involve a third-party vendor, it’s likely local companies would have been unaware the vendor was inflating advertising invoices to siphon extra money from Mercyhealth.

Even as Mercyhealth looks inward on its own processes to learn how $3 million in fraud could have happened under an executive’s watch, Bea believes Mercyhealth’s invoicing practices “meet or exceed” industry standards.

Bea said in the interview Tuesday and in his internal memo to employees that it appears patient care was not impacted by the alleged fraud.

Bortner was a 30-year Mercyhealth employee who Bea said started out as a marketing clerk and grew her career at the Janesville health care company to become the marketing department’s leader and one of the company’s top executives.

He said Bortner, along with some other longtime employees, have seen Mercyhealth grow into a regional powerhouse with more than a half-dozen full-scale hospitals and a growing presence in clinics spread over a large swath of rural, urban and suburban communities in southern Wisconsin and northern Illinois.

He said Bortner was well-known in Janesville through her work at Mercyhealth and as a civic volunteer.

“We’re just extremely, profoundly disappointed by this. Obviously, she (Bortner) has been such a long-term employee, and Barb was a big personality at Mercy. And so that’s why I think me and all of our staff at Mercy, the Mercy family, really feels betrayed by this,” Bea said. “Because it hasn’t ever happened before.”

Hemp 1848, at 111 E. Milwaukee St. in downtown Janesville, displays packages of gummies that contain delta-8 THC. At least two people received treatment at a hospital recently for adverse reactions to similar gummies, according to a Janesville police report.

A label on a package of delta-8 THC cookies at Hemp 1848 in downtown Janesville.

A legal drug that gets people “high” recently sent two residents to the hospital.

A Janesville police report tells the tale of two men and a woman, ages 33, 33 and 20, respectively, who received free samples of “delta-8 THC” gummies at Uptown Janesville, the former Janesville Mall, on Aug. 8.

One of them took a 100-mg gummy, another a 50-mg dose, and a third ate what was described as a one-gummy square.

Delta-8 THC is said to provide a “high” that is similar to the Delta-9 THC found in marijuana, but unlike marijuana and Delta-9 THC edibles, the Delta-8 version is legal.

Some have described the Delta-8 high as a milder high than that from smoking marijuana, but the recent case indicates that is not always the case.

One of the men was later described as unconscious with a possible seizure. The woman was shaking and had a rapid heartbeat. The condition of the third person was not noted in the report.

All three declined medical help from an ambulance crew, but they later began to experience more bad reactions and called for an ambulance to take them to Mercyhealth Hospital and Trauma Center, Janesville, the police report states.

Darcy Larum, general manager of the Hemp 1848 store in downtown Janesville, says she warns people against taking too much delta-8 when they try if for the first time, and she warns them against driving high.

“It’s intoxicating. I look at it that way. I mean, you’re intoxicated,” she said.

“Everybody reacts a little bit different to the different gummies,” Larum said when asked about adverse reactions.

Even heavy marijuana smokers can get adverse effects, she said.

Larum said she usually tells people to start with one half of a 100-mg gummy.

“If you’re doing what we say, you should be pretty safe,” Larum said. “We really advise you to start really slowly and give it some time. Unfortunately, people don’t listen.

“We want the right information out there. We don’t want people getting sick.”

In addition to the 100-mg gummies, the store offers 80-mg cookies and a 600-mg gummy rope. The store imports delta-8 liquid from Colorado and uses it to make various edibles as well as a topical cream and a roll-on version, Larum said.

Larum says the delta-8 has medicinal properties with good results in relieving headaches and other pain. She said she burned herself while cooking some edibles, put some of the cream on the burn and it healed very quickly.

For those feeling their dose was too big, Larum advises drinking lemon water or smoking CBD, which Hemp 1848 also sells.

CBD is a legal extract of hemp plants that is sold for its supposed medicinal properties that include relieving pain. Both CBD and delta-8 THC are derived from hemp, which is why they are legal.

Delta-9 THC, however, is the psychoactive substance in marijuana and remains a controlled substance in Wisconsin and many other states.

Glenn J. Milos, an emergency doctor at Mercyhealth, said in an email that delta-8 gummies can cause slow or rapid heartbeat, anxiety, a sedative effect, dry mouth and eyes, grogginess, low blood pressure, numbness, and impaired thinking and physical abilities.

Larum said delta-8 relieves her pain and helps her sleep, but she knows many if not most of her customers buy it for the high. She said she advises them to do it at home and not to drive while under the influence.

Janesville police warned about delta-8 last spring, saying that while the drug is sold legally, it can lead to arrests if people use it and drive.

Delta-8 will show up as positive for THC in blood and urine tests, just as the illegal delta-9 THC does, police said.

Who says you can’t go home?

The Aram Public Library plans to unveil on Aug. 27 a portrait painting by former Delavan artist William Thorne. the piece, donated by the Wallis family of Philadelphia, is a portrait of another former Delavan resident, Alice Sumner Fisher. 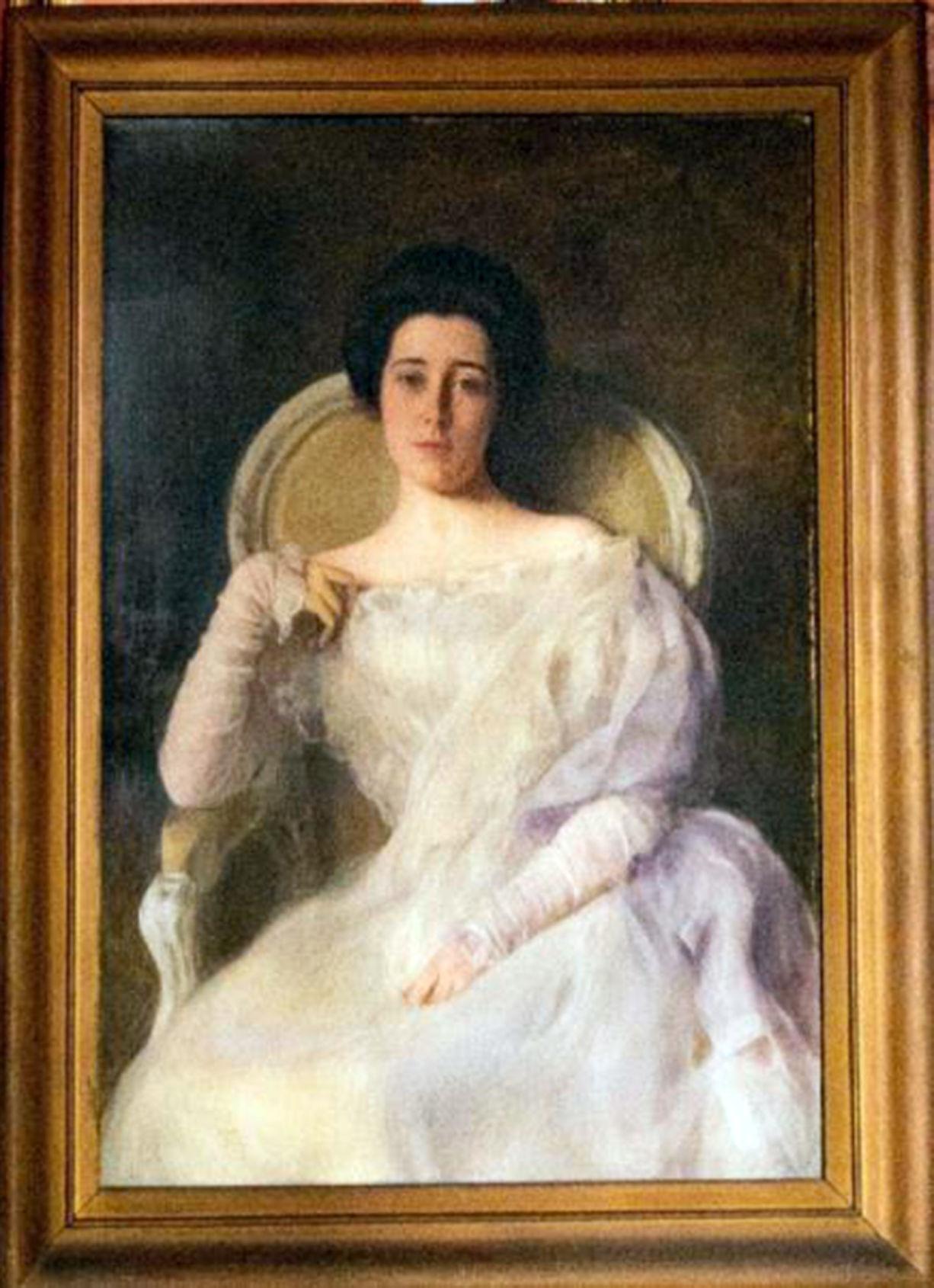 Thorne, who was born in Delavan in 1863, was primarily known as a portrait artist who spent the early years of his career painting in New York City and Paris. Schooled at the Art Institute of Chicago, he started as an illustrator and shifted to portraits as a means of earning money when he moved to New York in the late 1880s.

In 1890, Thorne moved from to Paris where he studied and painted portraits, often of wealthy Americans living abroad. Upon returning to the United States, he settled back in New York around 1902, where he began a career as a society portraitist at his studio in Carnegie Hall.

According to a press release by the Aram Public Library, his style was “distinctive” and focused on “high fashion” subjects.

“He had a wonderful portrait style,” library trustee Robert Betzer said in the release. “His portrait subjects always seemed so pleasant.”

Thorne did return to Delavan, where he worked out of his house on Fourth Street. It was during this time that he met, befriended and eventually painted Fisher in 1899.

Thorne died 10 days shy of his 93rd birthday in 1956 and was buried in the Spring Grove cemetery in Delavan.

According to a biography by Robert C. Kuhmann, Thorne was the “dean of Wisconsin portrait painters.”

Fisher also lived an active life of her own, which included time spent in New York and Pennsylvania. Alice Johnston was born in Bainbridge, New York, in 1876. Born to Charles and Alice Sumner, her family moved to Delavan in 1885. During their friendship, daughter Alice became a source for Thorne’s affection, though she married another man named George Fisher.

Fisher later got divorced and moved her children to a town west of Philadelphia. It was there that she met and married Alexis Dupont Parker.

Fisher’s daughter, Eleanor Wallis, inherited the portrait after her mother died in 1968. Fisher was buried in the same cemetery as her parents, as well as Thorne.

After Wallis’ death in 1996, the painting was most recently in the home of Stephen Wallis in Lexington, Massachusetts. Another grandchild, Kendall Wallis, says the family is glad the piece of art has “found a home” at the library.

This portrait won’t be the only Thorne painting at the Aram Public Library, as three other pieces are on display. Library director Michelle Carter said Thorne’s portraits are kept by families for generations and rarely for sale.

“Thanks to the generosity of the Wallis family, we now have a beautiful new painting by William Thorne to share with our community,” Carter said. “His portrait of Alice Sumner Fisher will be a treasured addition.”

Correction: The Gazette incorrectly identified Alice Johnston Sumner as the spouse of George Fisher. It was her daughter, Alice Winchester Sumner, who married Fisher.