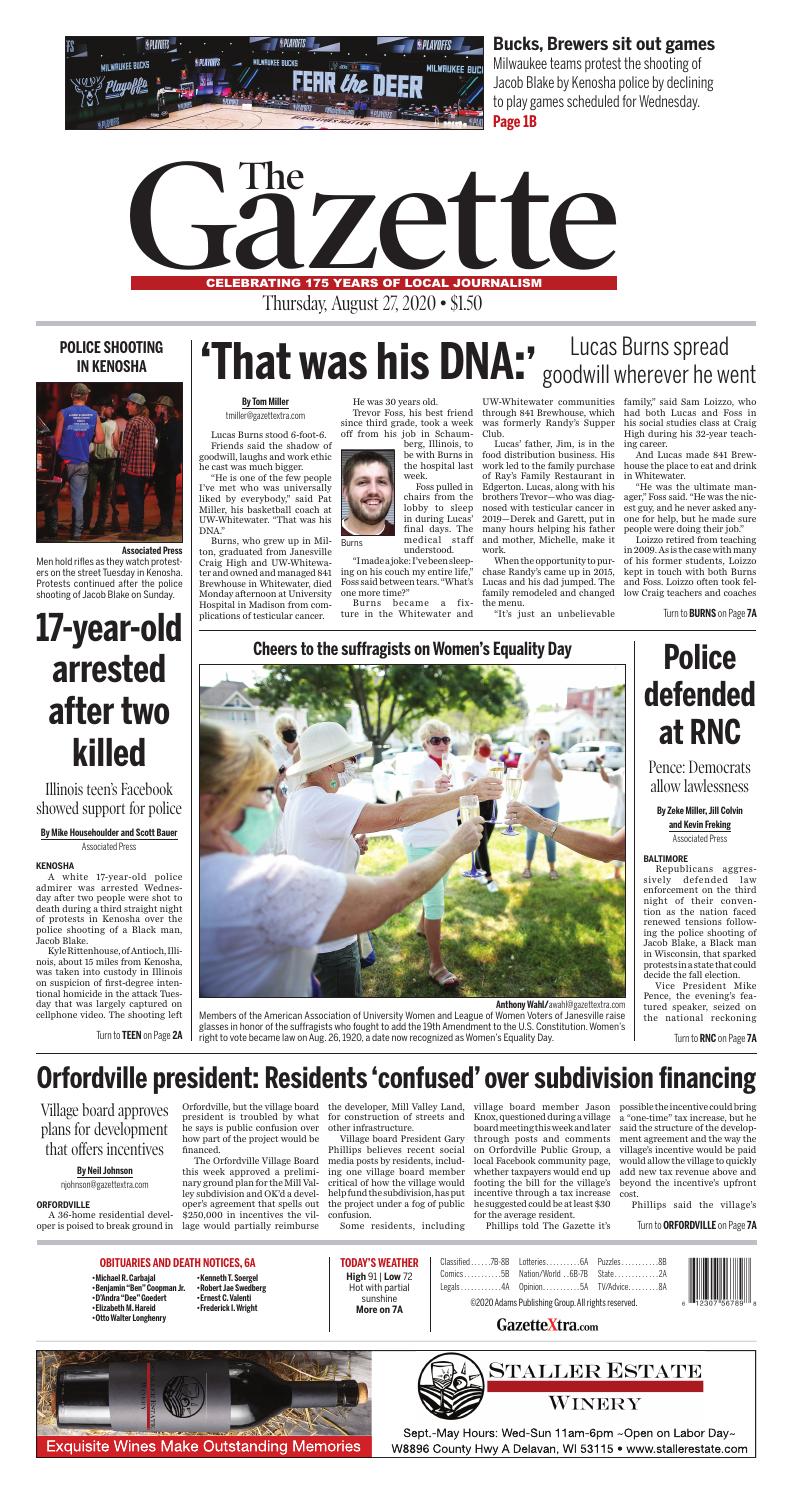 Local
top story centerpiece
'That was his DNA:' Lucas Burns spread goodwill wherever he went
By Tom Miller tmiller@gazettextra.com

From left, Pat Miller, Bob Suter and Lucas Burns pose for a photo at 841 Brew House in Whitewater. Burns played for Miller, UW-Whitewater’s basketball coach, and Suter, longtime Janesville Craig head coach, and both were regular customers at 841, which Burns owned and managed. Burns died Monday afternoon from complications from testicular cancer.

Friends said the shadow of goodwill, laughs and work ethic he cast was much bigger.

“He is one of the few people I’ve met who was universally liked by everybody,” said Pat Miller, his basketball coach at UW-Whitewater. “That was his DNA.”

Burns, who grew up in Milton, graduated from Janesville Craig High and UW-Whitewater and owned and managed 841 Brewhouse in Whitewater, died Monday afternoon at University Hospital in Madison from complications of testicular cancer.

Trevor Foss, his best friend since third grade, took a week off from his job in Schaumberg, Illinois, to be with Burns in the hospital last week.

Foss pulled in chairs from the lobby to sleep in during Lucas’ final days. The medical staff understood.

“I made a joke: I’ve been sleeping on his couch my entire life,” Foss said between tears. “What’s one more time?” 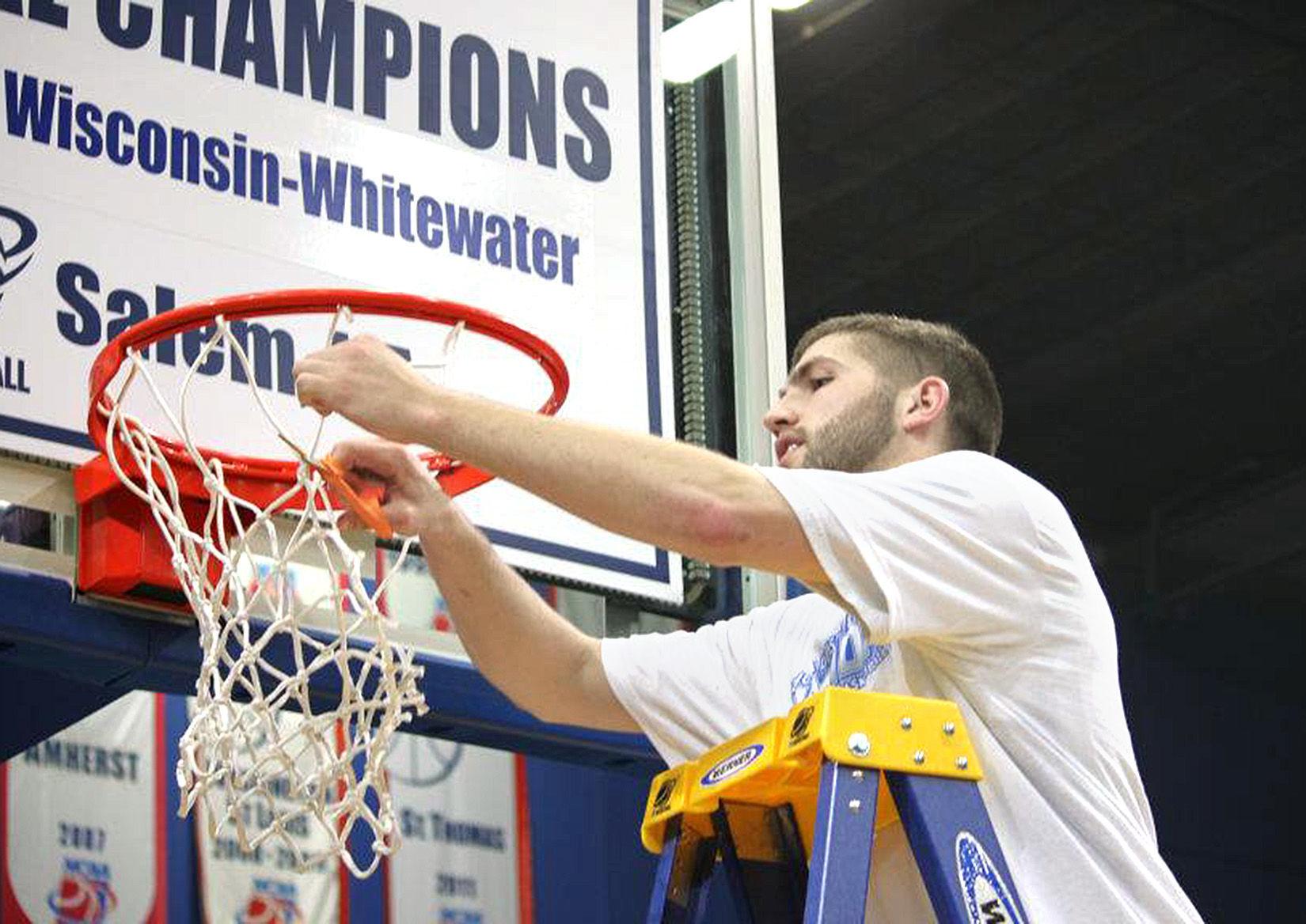 Burns became a fixture in the Whitewater and UW-Whitewater communities through 841 Brewhouse, which was formerly Randy’s Supper Club.

Lucas’ father, Jim, is in the food distribution business. His work led to the family purchase of Ray’s Family Restaurant in Edgerton. Lucas, along with his brothers Trevor—who was diagnosed with testicular cancer in 2019—Derek and Garett, put in many hours helping his father and mother, Michelle, make it work.

When the opportunity to purchase Randy’s came up in 2015, Lucas and his dad jumped. The family remodeled and changed the menu.

“It’s just an unbelievable family,” said Sam Loizzo, who had both Lucas and Foss in his social studies class at Craig High during his 32-year teaching career.

And Lucas made 841 Brewhouse the place to eat and drink in Whitewater.

“He was the ultimate manager,” Foss said. “He was the nicest guy, and he never asked anyone for help, but he made sure people were doing their job.”

Loizzo retired from teaching in 2009. As is the case with many of his former students, Loizzo kept in touch with both Burns and Foss. Loizzo often took fellow Craig teachers and coaches Bob Suter, Tom Neuenschwander, Victor Herbst and others to 841 for lunch.

“He was just one of the most genuine kids you’d ever want to meet,” Loizzo said of Burns.

Burns accepted a scholarship offer to play basketball from Concordia University St. Paul (Minnesota) after he graduated from Craig. He transferred to UW-Whitewater after his freshman year.

He averaged just 2.6 points a game in the 2011-12 season, but Miller said that was just a sliver of what Lucas brought to the team that ended up as the NCAA Division III champions.

“His most significant contribution by a longshot was leadership,” Miller said. “His leadership—he did it with humor, he did it talking to guys. He had a great heart and a very high social IQ.”

That is a trait that made Lucas successful with 841 Brewhouse.

“That’s where I’ve seen his extraordinary contributions to the community, his willingness to help any of the athletic programs that needed sponsorships for things like golf outings or needed team meals,” Miller said.

Burns first was diagnosed with testicular cancer in January. The cancer spread to Lucas’ brain, and his brain tumor hemorrhaged May 20. He was airlifted to Madison for emergency surgery. The surgery left him unable to speak.

Eventually he was transferred to a rehabilitation facility in Rockford, Illinois. 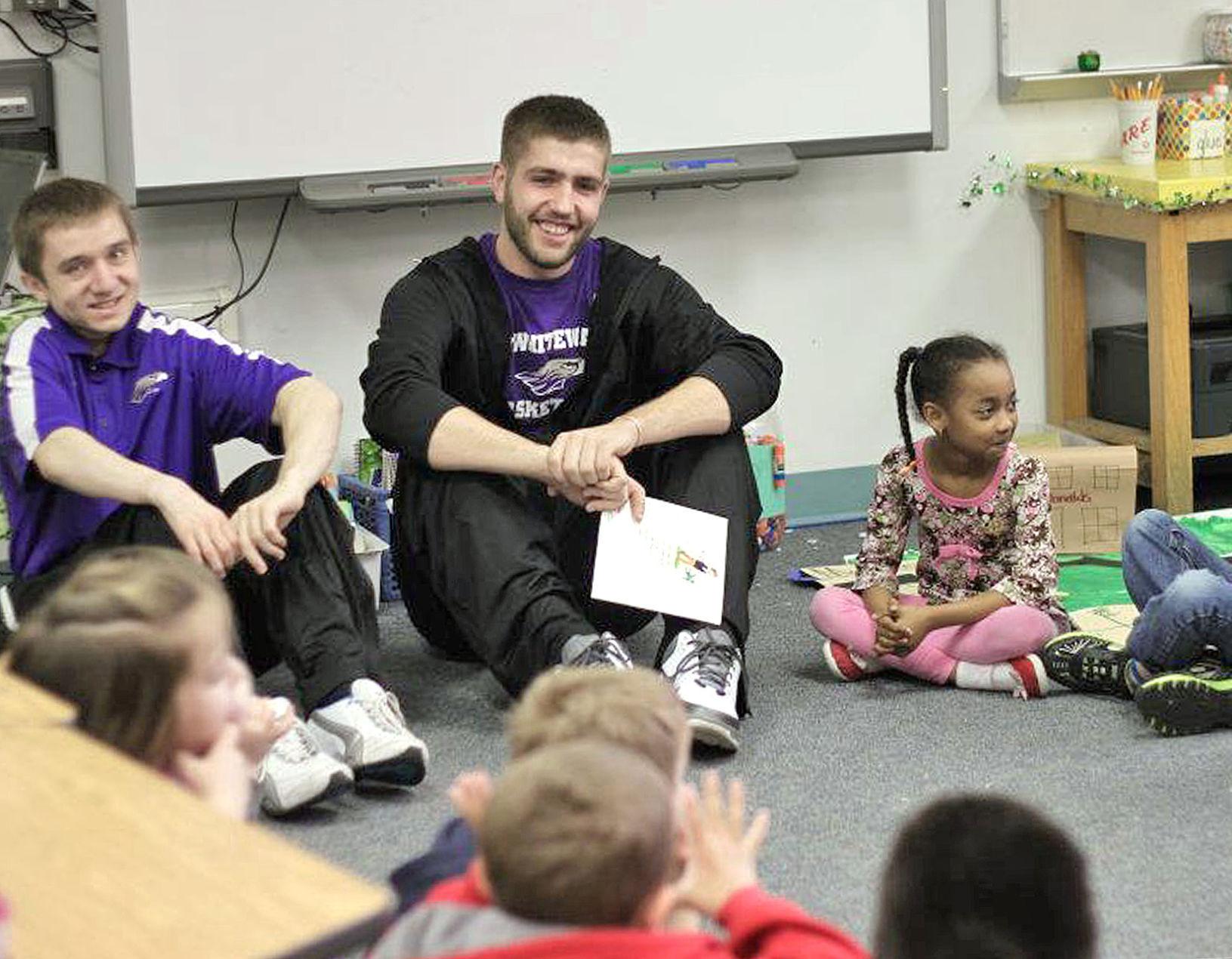 A former teammate on the Warhawks, Phil Negri, set up a GoFundMe account for Burns with a goal of raising $10,000. That goal was surpassed in just a few days. A total of 395 persons have donated $33,856.

Burns, as his friends knew, never would have asked for that, nor did he approve.

The day Burns was admitted in Rockford, Foss was in a business meeting. His phone buzzed. It was Burns.

Foss quickly excused himself from the meeting. The coronavirus pandemic had prevented any visitors from seeing Burns except for his mother, Michelle. She had told Foss that she felt her son was depressed, so Foss was pumped when he answered the call.

“He doesn’t say hello,” Foss said about the conversation. “Obviously, his mom was talking to him about it. So he called me to b---- about that. Great.”

Foss knows Burns was kidding—somewhat. But it illustrates what his best friend was like.

“He was just a rare person,” said Miller. “It was never about him. It was never what he would get in return. It was just about helping people.”

He did do his best friend one of his final favors last November.

Foss is a huge fan of singer Lana Del Rey. She has a haunting voice, and her fan base is mainly younger people.

For his 30th birthday, Foss bought two tickets for Del Rey’s Monday night concert at The Sylvee in Madison.

That Sunday, Burns went to the Packers game. Foss knew what kind of time he had. He did not expect to hear from him Monday.

But his phone rang Monday morning. It was Burns.

“Foss, I have to go into work to check things out, but then let’s go,” Burns said. “I’m going to the concert with you.”

“You don’t have to do this,” Foss said. “I can go by myself. Don’t do something that you’ll be miserable.”

But Burns insisted. And on a below-zero degree night, Foss and Burns were at the concert.

“He told me afterward, ‘I’m never doing this again.’ But that was the kind of dude he was. That was absolutely the last thing he wanted to do.”

But he did it. Those are the things that made everyone like Lucas Burns.

A 36-home residential developer is poised to break ground in Orfordville, but the village board president is troubled by what he says is public confusion over how part of the project would be financed.

The Orfordville Village Board this week approved a preliminary ground plan for the Mill Valley subdivision and OK’d a developer’s agreement that spells out $250,000 in incentives the village would partially reimburse the developer, Mill Valley Land, for construction of streets and other infrastructure.

Village board President Gary Phillips believes recent social media posts by residents, including one village board member critical of how the village would help fund the subdivision, has put the project under a fog of public confusion.

Some residents, including village board member Jason Knox, questioned during a village board meeting this week and later through posts and comments on Orfordville Public Group, a local Facebook community page, whether taxpayers would end up footing the bill for the village’s incentive through a tax increase he suggested could be at least $30 for the average resident.

Phillips told The Gazette it’s possible the incentive could bring a “one-time” tax increase, but he said the structure of the development agreement and the way the village’s incentive would be paid would allow the village to quickly add new tax revenue above and beyond the incentive’s upfront cost.

Under a plan by the developer, Zach Knutson of Next Generation Construction, development of Mill Valley likely would reach the two milestones—completion of streets and infrastructure and houses ready to market—sometime in 2021.

Phillips said the village’s incentive covers “probably a quarter or less” of the developer’s projected cost on streets, lights and other infrastructure. He believes the village would recoup the cost of the project through additional property tax revenue once the developer builds and sells eight of the 36 planned homes.

He said the village has still not discussed how it would absorb the upfront cost of the incentives, and whether or how the incentive will get written into residents’ next tax bill. But he believes the incentive’s cost to the village—about $20,000 a year over 20 years—likely would be mostly covered by additional tax base the project generates.

The infrastructure incentive came through an ordinance change the board approved, and the developer’s agreement allows the developer to break ground on the project and begin building homes this fall pending state regulatory approval of the project plan.

The agreement also waives local restrictive covenants, a move that could give the builder greater flexibility on what type of housing to build in a plan that includes at least four lots for “multifamily” housing.

Phillips said the first five homes would be built “on speculation” but that Knutson plans to build the rest of the homes as custom builds for buyers.

Phillips said the pace of home building Knutson is committed to would within a few years bring the village an additional $88,000 a year in property tax revenues. That likely would eventually draw down any tax increase spurred by the incentive package.

“If I haven’t done a good enough job of communicating this so there’s not a lot of confusion, I’ll own that,” Phillips said.

Confusion likely stems from a few areas, Phillips said. For one, it’s the first time in two decades a developer has proposed a subdivision this size in Orfordville. For another, Phillips said, the finer points of the development’s plan got hashed out on social media. 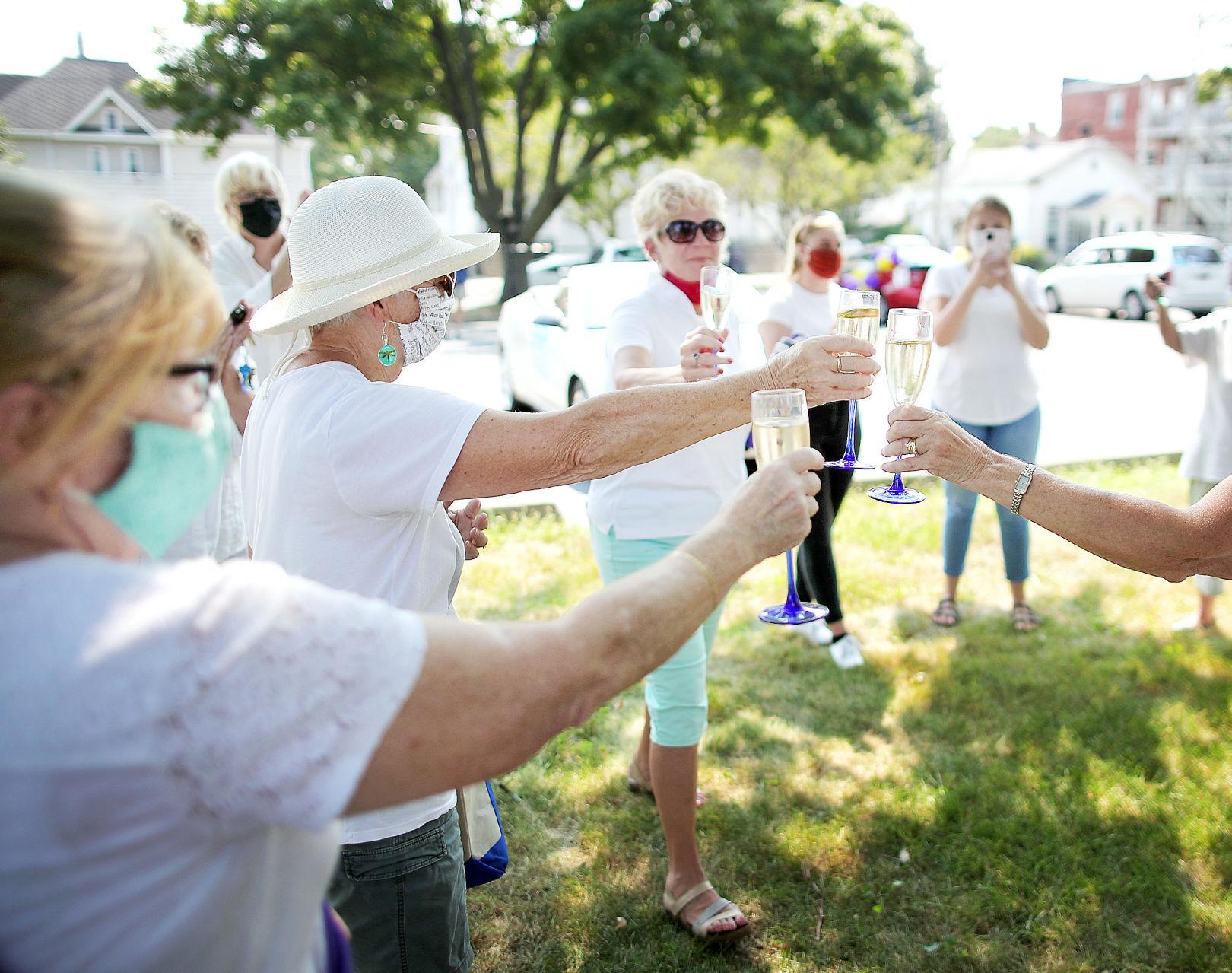 Members of the American Association of University Women and League of Women Voters of Janesville raise glasses in honor of the suffragists who fought to add the 19th Amendment to the U.S. Constitution. Women’s right to vote became law on Aug. 26, 1920, a date now recognized as Women’s Equality Day. 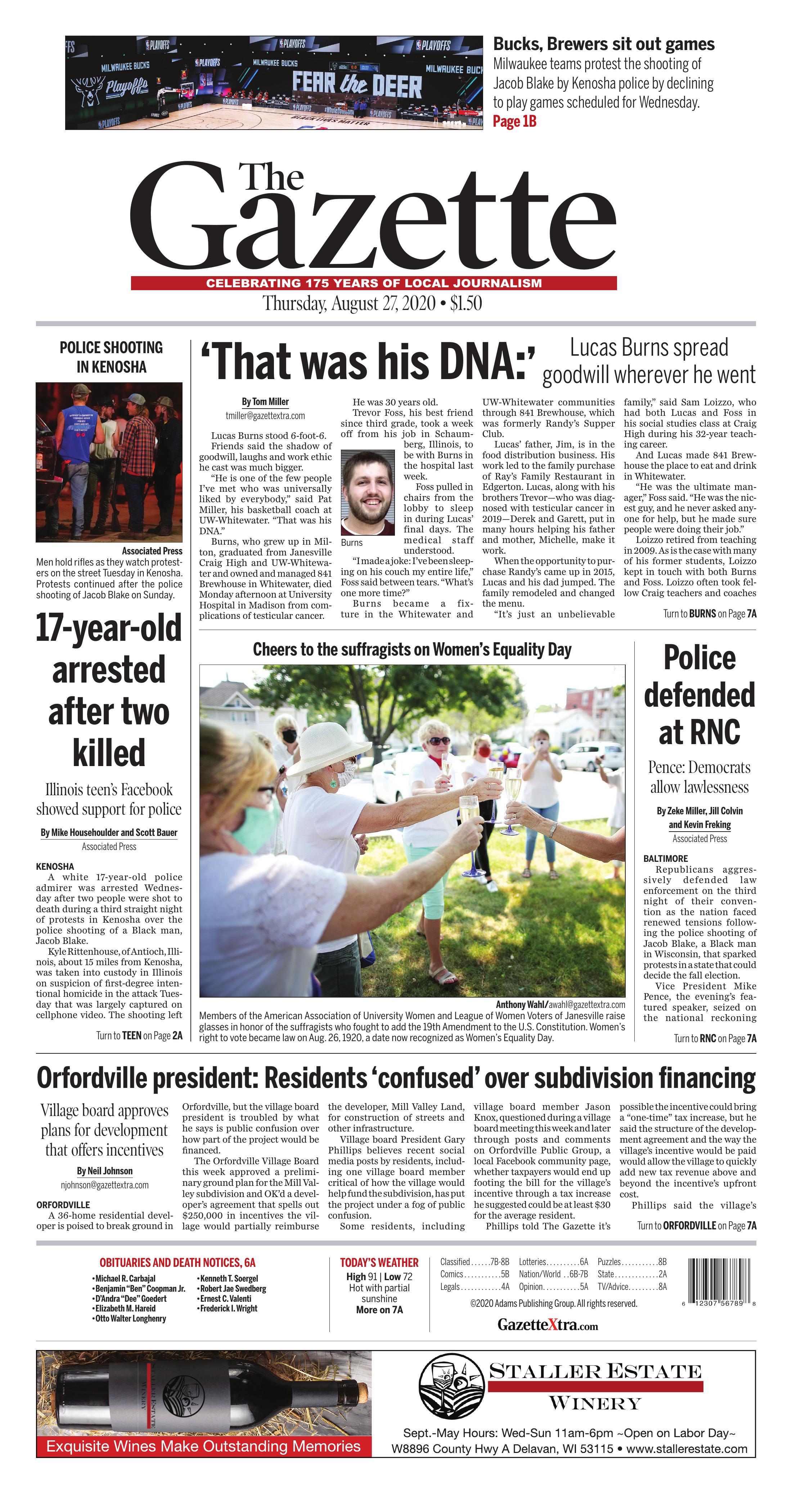