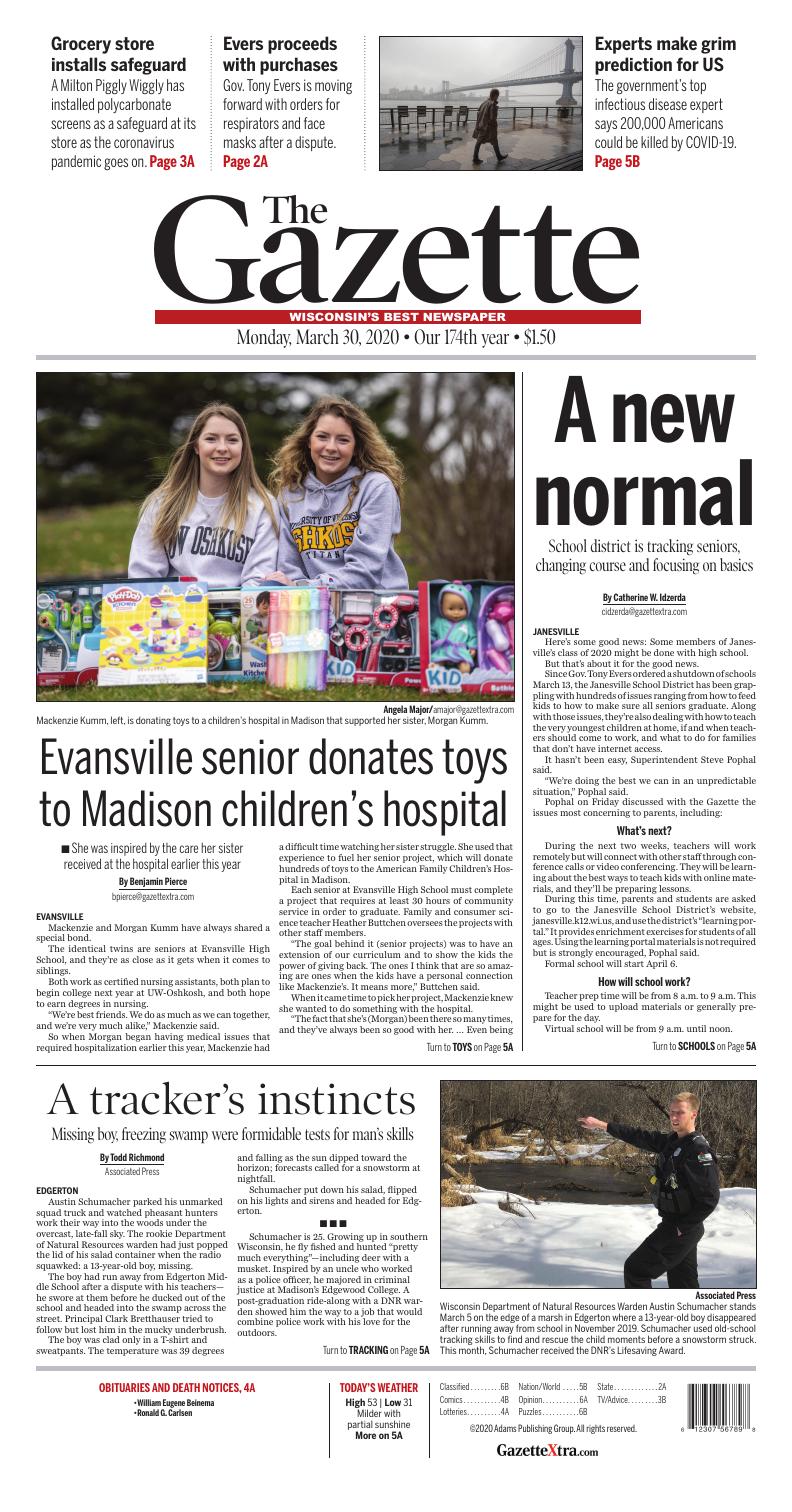 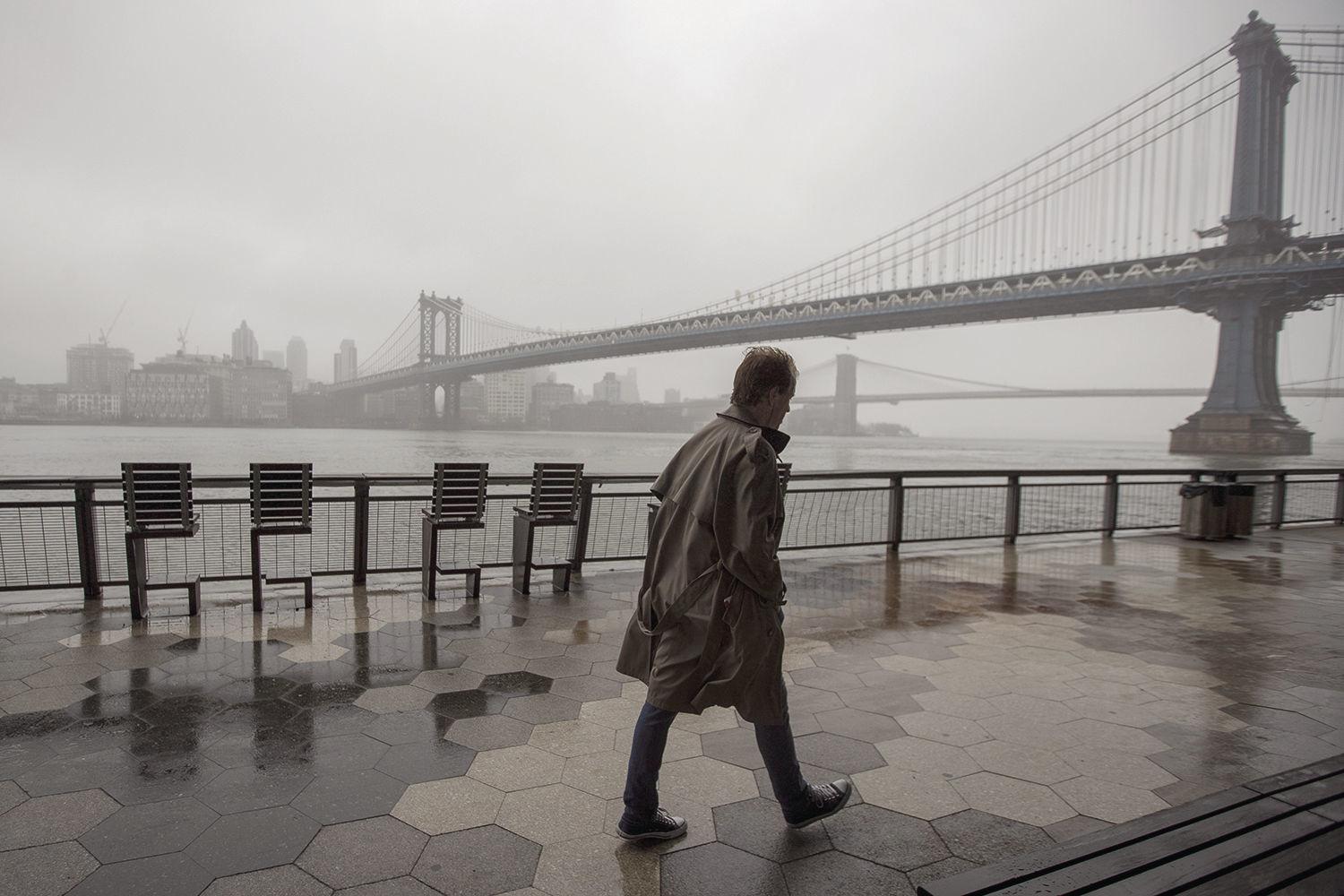 A man walk alone on the promenade under the FDR drive in Lower Manhattan, Sunday, March 29, 2020. The new coronavirus causes mild or moderate symptoms for most people, but for some, especially older adults and people with existing health problems, it can cause more severe illness or death. (AP Photo/Mary Altaffer)

Mackenzie Kumm, left, is donating toys to a children’s hospital in Madison that supported her sister, Morgan Kumm.

Mackenzie and Morgan Kumm have always shared a special bond.

The identical twins are seniors at Evansville High School, and they’re as close as it gets when it comes to siblings.

Both work as certified nursing assistants, both plan to begin college next year at UW-Oshkosh, and both hope to earn degrees in nursing.

“We’re best friends. We do as much as we can together, and we’re very much alike,” Mackenzie said.

So when Morgan began having medical issues that required hospitalization earlier this year, Mackenzie had a difficult time watching her sister struggle. She used that experience to fuel her senior project, which will donate hundreds of toys to the American Family Children’s Hospital in Madison.

Each senior at Evansville High School must complete a project that requires at least 30 hours of community service in order to graduate. Family and consumer science teacher Heather Buttchen oversees the projects with other staff members.

“The goal behind it (senior projects) was to have an extension of our curriculum and to show the kids the power of giving back. The ones I think that are so amazing are ones when the kids have a personal connection like Mackenzie’s. It means more,” Buttchen said.

When it came time to pick her project, Mackenzie knew she wanted to do something with the hospital.

“The fact that she’s (Morgan) been there so many times, and they’ve always been so good with her. … Even being 17 years old, when she got her spleen removed, they gave her a blanket and a toy to give her something to do.”

The sisters shared laughs about the toy, but it made a difference, Mackenzie said.

“She got this creepy-looking doll, but even that made her happy, and it comforted her. No matter your age and how severe your sickness is, all of that stuff makes a difference, and I wanted to give back and help them out,” Mackenzie said.

Morgan has been sick numerous times since seventh grade. She has fought through heart palpitations, a hip fracture and multiple infections. She was hospitalized in July when her blood count dropped to a dangerous number.

At first doctors thought she had leukemia.

Morgan received six blood transfusions at the children’s hospital, where doctors discovered she has a rare blood disorder.

Morgan is home now and continues physical therapy and medication to keep her symptoms under control.

Mackenzie held a toy drive at a girls basketball game and has also accepted donations through Facebook. The money is used to buy toys, which are then donated to the hospital.

The twins are different in their own ways, but they share a relationship unlike most high school siblings, Buttchen said.

“I think it’s a really special twin bond,” Buttchen said. “I really have watched it over the years. They have different styles but their heart is the same. It’s just super special. It’s very supportive, very loving.”

When Mackenzie first proposed the project to Buttchen, the teacher had a hard time holding back tears.

“I have taught Mackenzie and Morgan in numerous classes, and I’ve always known they have a special bond,” Buttchen said. “Tears welled up in my eyes to see Mackenzie help her and the other kids in the hospital.”

Those looking to donate money or toys to the project can contact Mackenzie at kummmac000@ecsdnet.org.

Mackenzie said she’s happy to have her sister home and hopes her project will help keep patients at the hospital happy until they can go home, too.

“I’m really hoping that whoever receives one of my donations, it helps them feel comfortable,” Mackenzie said. “I hope that if they have a scary procedure it can help make them laugh or relax them. I want to give them something to make them more comfortable, make them smile and feel happy.”

Here’s some good news: Some members of Janesville’s class of 2020 might be done with high school.

But that’s about it for the good news.

Since Gov. Tony Evers ordered a shutdown of schools March 13, the Janesville School District has been grappling with hundreds of issues ranging from how to feed kids to how to make sure all seniors graduate. Along with those issues, they’re also dealing with how to teach the very youngest children at home, if and when teachers should come to work, and what to do for families that don’t have internet access.

“We’re doing the best we can in an unpredictable situation,” Pophal said.

Pophal on Friday discussed with the Gazette the issues most concerning to parents, including:

During the next two weeks, teachers will work remotely but will connect with other staff through conference calls or video conferencing. They will be learning about the best ways to teach kids with online materials, and they’ll be preparing lessons.

During this time, parents and students are asked to go to the Janesville School District’s website, janesville.k12.wi.us, and use the district’s “learning portal.” It provides enrichment exercises for students of all ages. Using the learning portal materials is not required but is strongly encouraged, Pophal said.

How will school work?

Teacher prep time will be from 8 a.m. to 9 a.m. This might be used to upload materials or generally prepare for the day.

Virtual school will be from 9 a.m. until noon.

“This doesn’t mean that kids will be staring at a screen for the whole time,” Pophal said. “The teacher might give them work to do offline.”

In the elementary grades, the focus will be on reading and math.

“We want to have a laser focus on the basics,” Pophal said.

All teacher are encouraged to set up “office hours,” times when they can be reached by parents and kids with questions.

High school courses will be different, with more options for online learning.

What about kids who don’t have electronic devices or internet access?

High school students already have a electronic device, such as a Chromebook or iPad, that was issued by the district.

Before kids came back to school to collect their things March 19, the district’s IT department went through all the classroom sets of electronic devices and found one for each child.

The district also has MiFis, wireless routers that act as WiFi hotspots. Those are primarily for homeless students. Starting April 6, all of the elementary schools will serve as hot spots, so kids can bike up, walk up or have a parent drive them up for access.

Will seniors still be able to graduate?

“We’re trying to figure out who is at the finish line, who is close and who is one or two classes away.

Some seniors might already have all the credits they need and be done with school. They can continue to take online courses if they chose.

For the remaining seniors, staff will focus on getting each one what they need to graduate in June.

During this time, all students will be getting pass/fail grades.