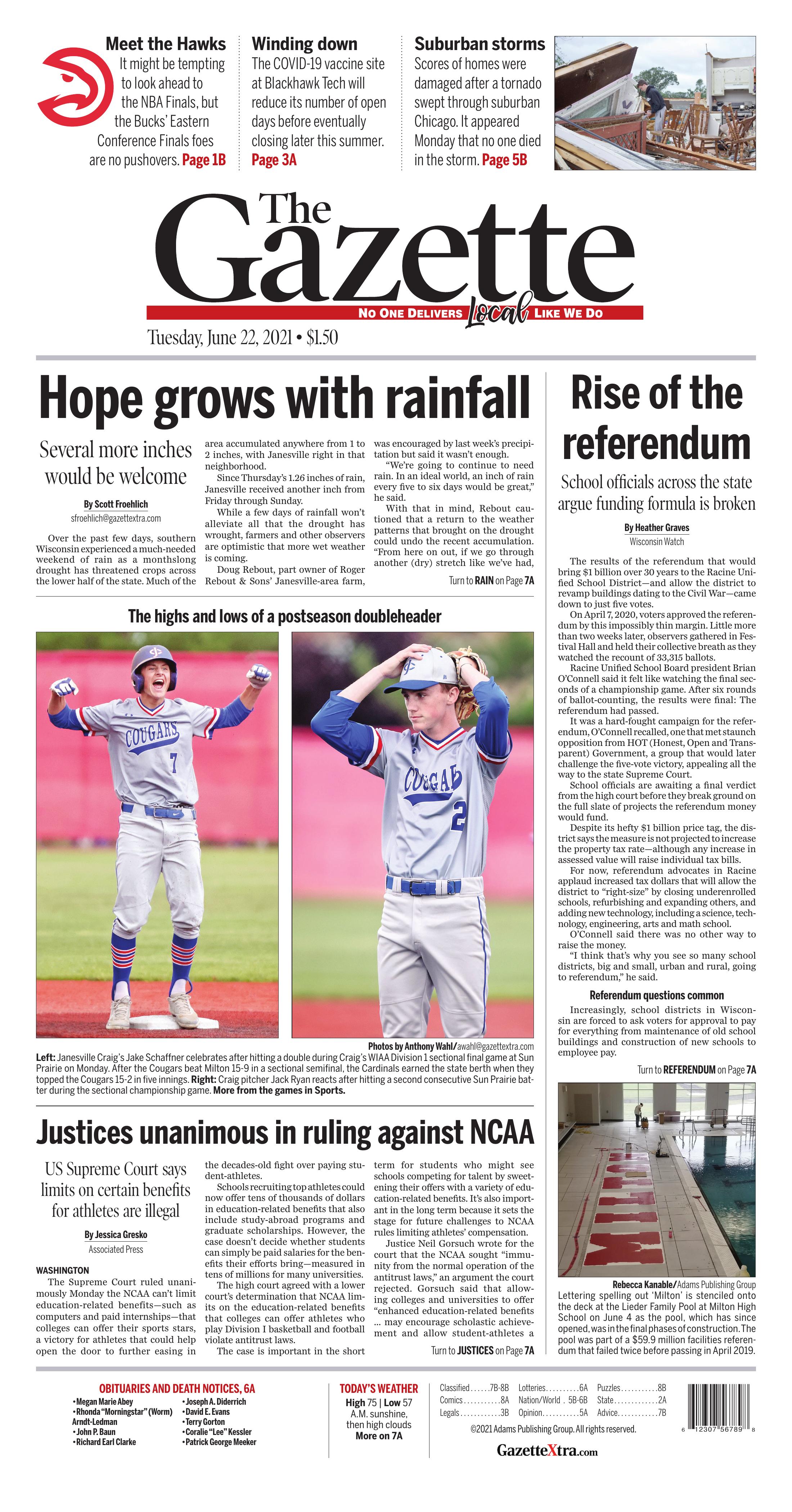 Over the past few days, southern Wisconsin experienced a much-needed weekend of rain as a monthslong drought has threatened crops across the lower half of the state. Much of the area accumulated anywhere from 1 to 2 inches, with Janesville right in that neighborhood.

Since Thursday’s 1.26 inches of rain, Janesville received another inch from Friday through Sunday.

While a few days of rainfall won’t alleviate all that the drought has wrought, farmers and other observers are optimistic that more wet weather is coming.

“We’re going to continue to need rain. In an ideal world, an inch of rain every five to six days would be great,” he said.

With that in mind, Rebout cautioned that a return to the weather patterns that brought on the drought could undo the recent accumulation. “From here on out, if we go through another (dry) stretch like we’ve had, that would be very damaging,” he said.

The next few weeks will be crucial in determining how this summer’s crops fare, especially for farmers growing corn. Joe Lauer, an agronomist at UW-Madison, noted that the growth of corn will hinge upon the pollination process.

Pollination will begin around July 15 and take seven to 10 days. If successful, good yields will result. On the other hand, if dry conditions persist, Lauer said it will create stress on the plants and stunt the growth of corn.

“I think this rainfall was important and hopefully we’ll continue to get an inch of rain every seven days or so,” Lauer said.

Other areas of the state are experiencing differing degrees drought conditions. Nearly half of Walworth County is in an extreme drought after only 1.19 inches of rain fell within the past 30 days. In neighboring counties such as Green, Dane and Lafayette, drought conditions exist but not as bad as in years past.

Joshua Kamps, an agricultural educator at UW-Madison, attributed this to sufficient moisture in soils that have allowed crops to keep growing. But Kamps pointed out the overall rain deficiency is still a cause for concern in Dane County.

“We have not received a recharge of rain to make me feel comfortable that the moisture is in the soil profile to finish our crops,” he said.

Fortunately, the forecast includes the possibility of further relief. There is a chance of for thunderstorms tonight and through the rest of the week.

Sarah Marquardt, senior hydrologist at the Sullivan office of the National Weather Service, said this past weekend brought a “soaking rain” and she expects more of that this week. 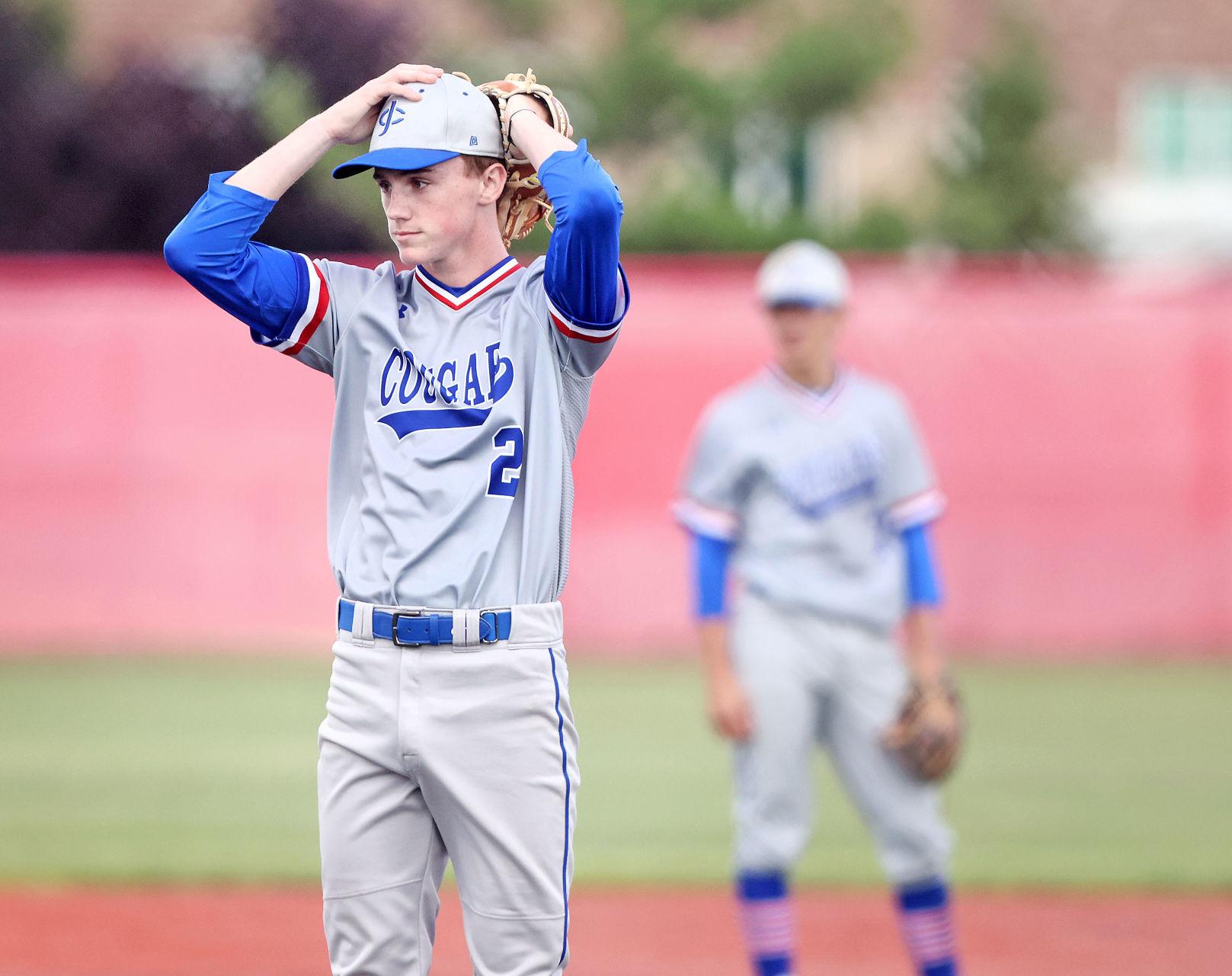 Lettering spelling out ‘Milton’ is stenciled onto the deck at the Lieder Family Pool at Milton High School on June 4 as the pool, which has since opened, was in the final phases of construction. The pool was part of a $59.9 million facilities referendum that failed twice before passing in April 2019.

Howard-Suamico School Superintendent Damian LaCroix flips through minutes from a community meeting held in the Town of Pittsfield, Wis., on Nov. 15, 1856, which created the area’s first school—and the taxes to pay for it. Increasingly, school districts in Wisconsin must seek voter approval for spending when the state revenue cap and funding formula leave them short. (Ben Rodgers/Press Times)

Dennis Krueger, superintendent of the West De Pere (Wis.) School District, stands in the district's new intermediate school, approved by voters in 2018. Krueger said going to referendum was the only way to raise enough money to pay for the new school, which is needed to accommodate growth in enrollment. (Lea Kopke/Press Times)

The results of the referendum that would bring $1 billion over 30 years to the Racine Unified School District—and allow the district to revamp buildings dating to the Civil War—came down to just five votes.

On April 7, 2020, voters approved the referendum by this impossibly thin margin. Little more than two weeks later, observers gathered in Festival Hall and held their collective breath as they watched the recount of 33,315 ballots.

Racine Unified School Board president Brian O’Connell said it felt like watching the final seconds of a championship game. After six rounds of ballot-counting, the results were final: The referendum had passed.

It was a hard-fought campaign for the referendum, O’Connell recalled, one that met staunch opposition from HOT (Honest, Open and Transparent) Government, a group that would later challenge the five-vote victory, appealing all the way to the state Supreme Court.

School officials are awaiting a final verdict from the high court before they break ground on the full slate of projects the referendum money would fund.

Despite its hefty $1 billion price tag, the district says the measure is not projected to increase the property tax rate—although any increase in assessed value will raise individual tax bills.

For now, referendum advocates in Racine applaud increased tax dollars that will allow the district to “right-size” by closing underenrolled schools, refurbishing and expanding others, and adding new technology, including a science, technology, engineering, arts and math school.

O’Connell said there was no other way to raise the money.

Increasingly, school districts in Wisconsin are forced to ask voters for approval to pay for everything from maintenance of old school buildings and construction of new schools to employee pay.

Since 2016, more than seven out of every 10 of Wisconsin’s 421 school districts have gone to referendum, with two-thirds of those ballot measures passing, said Ari Brown, a researcher with the Wisconsin Policy Forum.

The frequency with which districts in Wisconsin must exceed state-imposed revenue limits shows the nearly 30-year-old state funding formula is failing to keep up with present-day needs, school officials say.

Prior to 1993, local school districts generally had the authority to raise as much as they deemed necessary and have the local taxpayers cover it with the state covering a certain percentage, Brown said. But that year, the Wisconsin Legislature imposed revenue limits in response to concerns from lawmakers and members of the public about rapidly rising tax bills to fund schools.

The limits are based on a complicated formula that takes into account the assessed property in the district, enrollment and past revenue, Brown said. State aid can decrease as property values increase or if student enrollment decreases.

And proposals by former state superintendent and current Democratic Gov. Tony Evers to change the system—and vastly increase state funding to education—have been rebuffed by the GOP-run Legislature.

Money dries up as enrollment drops

Brown said while the per-pupil state aid has increased over time, the rate has not kept up with inflation. From the 2009-10 school year to 2018-19, inflation rose 17%, while the state average revenue limit per pupil increased 6%, he said.

And if a district’s enrollment decreases, the effect on its bottom line can be magnified, said Dale Knapp, director of Forward Analytics, the research arm for the Wisconsin Counties Association.

“The challenges for school districts is they have a lot of what I would call semi-fixed costs, for example, teachers,” he said. “Suppose your average class size is 25, and you’re a medium-sized district, but you lose 50 students in a year. It’s going to be across multiple grades, so you can’t necessarily in that year lay off two teachers because you have 50 fewer students. … So your costs don’t decline linearly with enrollment.”

Dan Rossmiller, director of government relations for the Wisconsin Association of School Boards, said this dynamic has created funding problems for many districts—one that is difficult to explain to taxpayers who might oppose increasing taxes to pay for schools where enrollments are declining.

“What’s happened since about the early 2000s is that enrollment has been decreasing,” Rossmiller said. “That’s what’s pinching school district budgets. As enrollment goes down, the state-imposed revenue limit reduces the revenue available to the district. The real problem in explaining this to the public is that every district has a unique situation and a unique explanation.”

A Republican bill that would have made enrollment declines less financially damaging failed to pass the Legislature in 2020.

The Green Bay Area Public School District, the fourth largest district in the state, is no stranger to referendums. It has gone to voters eight times since 1993.

Its most recent pair passed in 2017, which included $68.25 million for a districtwide building and facilities improvement plan and an operational referendum authorizing the district to exceed the revenue cap by $16.5 million per year for 10 years.

“So the revenue cap is what needs to change—pure and simple,” said Pete Ross, the Green Bay district’s chief operations officer. “It has not increased with inflation in any of the years since it’s been put in place.”

Ross said the cap has locked Green Bay into a level of spending that no longer supports the district’s needs. In 2017, Green Bay’s per-pupil spending was $9,691—well below the state average of $10,444, district spokeswoman Lori Blakeslee said.

Savion Castro, Madison school board vice president, said even high property value districts like Madison do not fare well under the revenue caps because of the significant needs of some of their students. The district passed a pair of referendums in November 2020 totaling $350 million—$317 million for capital projects and $33 million in operating funds that will phase in over four years.

“We have very, very, very high levels of inequity in our school system. West High School has the highest level of income inequality in the whole state,” Castro said. “Big picture, I think we need to come up with a formula that is reflective of the actual needs of students and the changing demographics that we are seeing in our schools.”

But former Republican state Sen. Luther Olsen, who chaired the Senate Education Committee until 2020, said the nearly 30-year-old funding formula has done the job, curbing what lawmakers and many members of the public felt was unfettered spending by school officials.

“What was happening is that schools were writing checks and the state was having to sign its name on the bottom, and when it said it would fund whatever a school spent, there was no concern,” he said.

Olsen and state Rep. Joel Kitchens, R-Sturgeon Bay, served as co-chairs of the bipartisan Blue Ribbon Commission on School Funding. Both are longtime former school board members in northeastern Wisconsin.

In 2019, the commission put forth 20 recommendations for legislative action—including restoring the state’s commitment of two-thirds funding of school costs, adjusting per-pupil funding with inflation, factoring in the needs of low-income pupils and updating revenue limit formulas.

The Legislature has taken no action on those proposals, but, said Kitchens, “I would hope that we would still have a chance to get those done this time or in the future.”

“Unfortunately,” she said, “what we found is our formula is none of those things, and it is harming Wisconsin kids, families and teachers.”

Howard-Suamico Superintendent Damian LaCroix keeps a powerful reminder of the past, which he hopes is a sign of the future of public education. Nestled on his office bookshelves are the original minutes from a community meeting held in the town of Pittsfield on Nov. 15, 1856.

“The only thing on the agenda was this group recognizing the need if the community was going to prosper and thrive, they needed to invest in their schools,” LaCroix said.

On that day, those 17 community members agreed on a $200 tax to build a new school house and a $50 tax to pay for a teacher.

Fast forward 165 years, and school finance in 2021 is infinitely more complex—and the needs of students and the community have grown to levels unfathomable in the 1800s.

Because Howard-Suamico was a low-spending district back in 1993, it has held nine referendum questions to boost spending since 2005, seven of which passed.

“Over 160 years ago, leaders in this community recognized education is not an expense, it’s an investment,” LaCroix said. “We have a duty, a moral and ethical obligation, to educate every child and help them maximize their potential.”