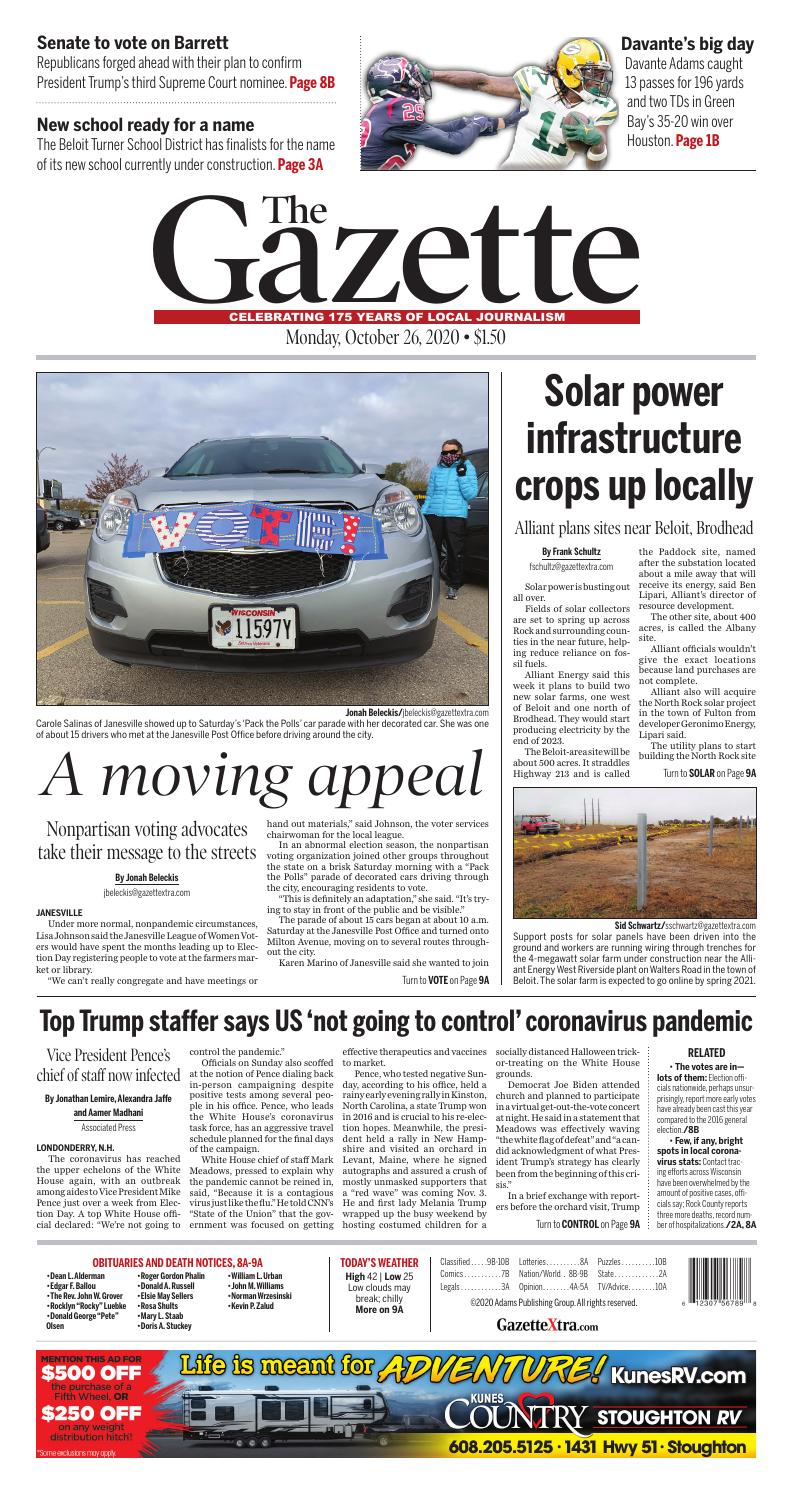 Carole Salinas of Janesville showed up to Saturday’s ‘Pack the Polls’ car parade with her decorated car. She was one of about 15 drivers who met at the Janesville Post Office before driving around the city.

Under more normal, nonpandemic circumstances, Lisa Johnson said the Janesville League of Women Voters would have spent the months leading up to Election Day registering people to vote at the farmers market or library.

“We can’t really congregate and have meetings or hand out materials,” said Johnson, the voter services chairwoman for the local league.

In an abnormal election season, the nonpartisan voting organization joined other groups throughout the state on a brisk Saturday morning with a “Pack the Polls” parade of decorated cars driving through the city, encouraging residents to vote.

“This is definitely an adaptation,” she said. “It’s trying to stay in front of the public and be visible.”

The parade of about 15 cars began at about 10 a.m. Saturday at the Janesville Post Office and turned onto Milton Avenue, moving on to several routes throughout the city.

Karen Marino of Janesville said she wanted to join the parade “because every vote counts.” She wrote the word “vote” on her car windows in red, white and blue marker.

Also in attendance Saturday was Carole Salinas of Janesville, who is the co-president of the Janesville branch of the American Association of University Women. She had taped decorative paper that said “vote” to the front of her car.

“We want women to get out and vote,” she said, adding that the league invited her local association.

Other cars listed resources for voters, such as the website myvote.wi.gov and the League of Women Voters’ voter ID helpline, 608-285-2141. 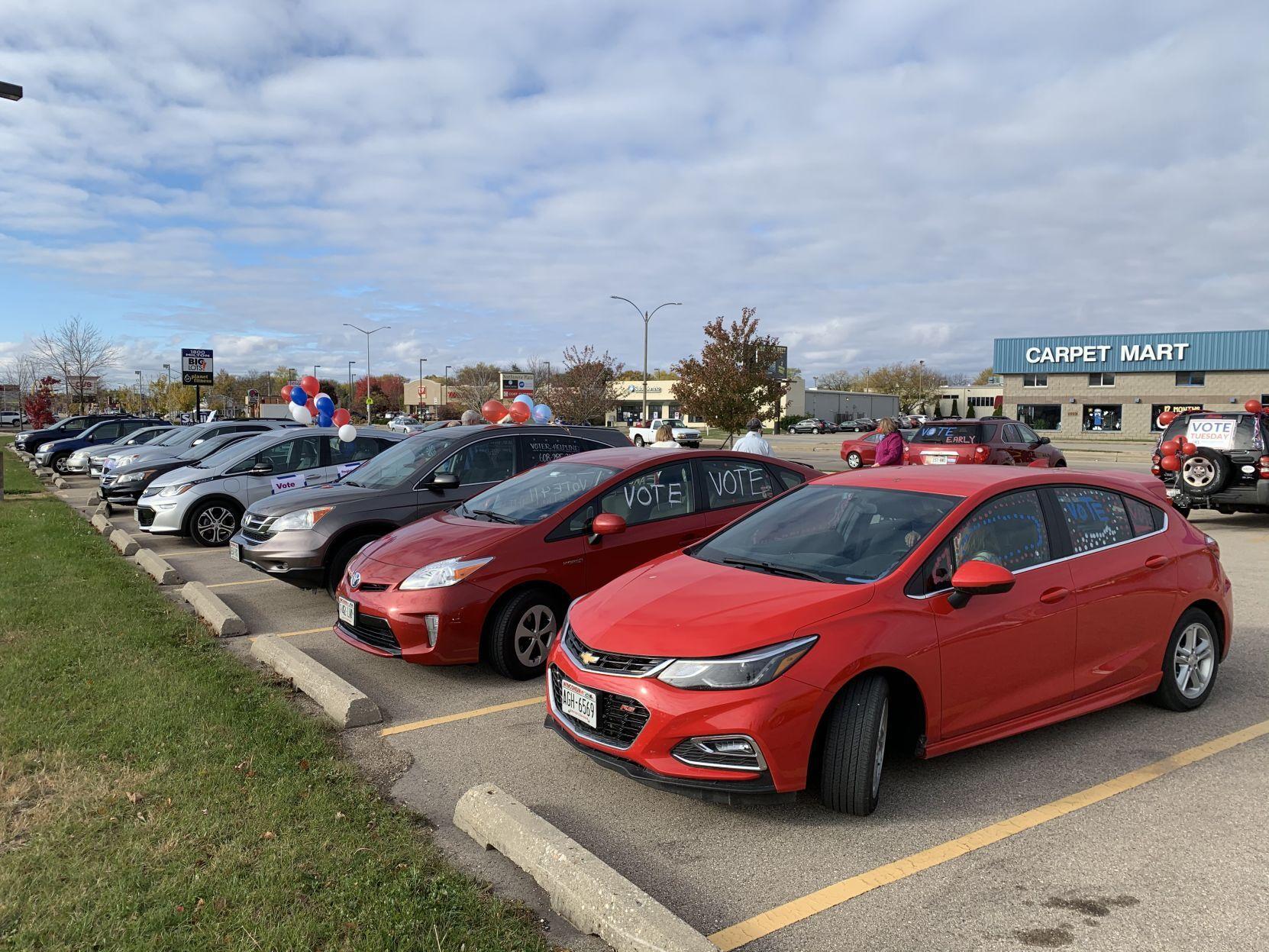 Cars meet at the Janesville Post Office before driving around the city for Saturday’s ‘Pack the Polls’ car parade.

Johnson said they wanted to make some noise—although, at the request of local police, not too much noise—in Janesville neighborhoods to remind residents how important the right to vote is.

At times, Johnson gets frustrated with the obstacles to voting, such as long lines, having the proper photo ID and proof of residency when registering.

“Even though we have a right to vote, the rights have almost some strings attached, where you’ve got to make sure that you’re in compliance,” she said. “And that’s where we step in and try to help people.”

One point of confusion she has heard from the folks she speaks with is about absentee ballots and the logistics for filling them out and submitting them.

It has also been a struggle to follow all the court decisions, as each level of the judicial system might have different rulings.

She said this close to the election, voters mail in their ballots “at their own risk.” It’s not that she doesn’t trust the post office; she just knows the staff might be overwhelmed.

She instead encouraged people who have their ballots to check with their city hall or local clerk about how to submit them in person.

She also emphasized that if the results are slow to arrive on Election Day or later, she trusts that election officials are taking their time to be thorough.

Johnson said “in my dark moments,” she thinks about how she can’t complete the whole voting process for everyone she meets.

Johnson knows a lot of people she meets—those tuning into League of Women Voter events, for example—might already be locked-in voters.

The next step, she said, is encouraging those people to think about their social circles: Who can they reach? Are their parents, roommates and co-workers all registered to vote? Do they have a plan to vote in order to avoid last-minute snafus, such as bad weather or unforeseen circumstances?

“My message (on a recent call) was: Spread the word,” she said. 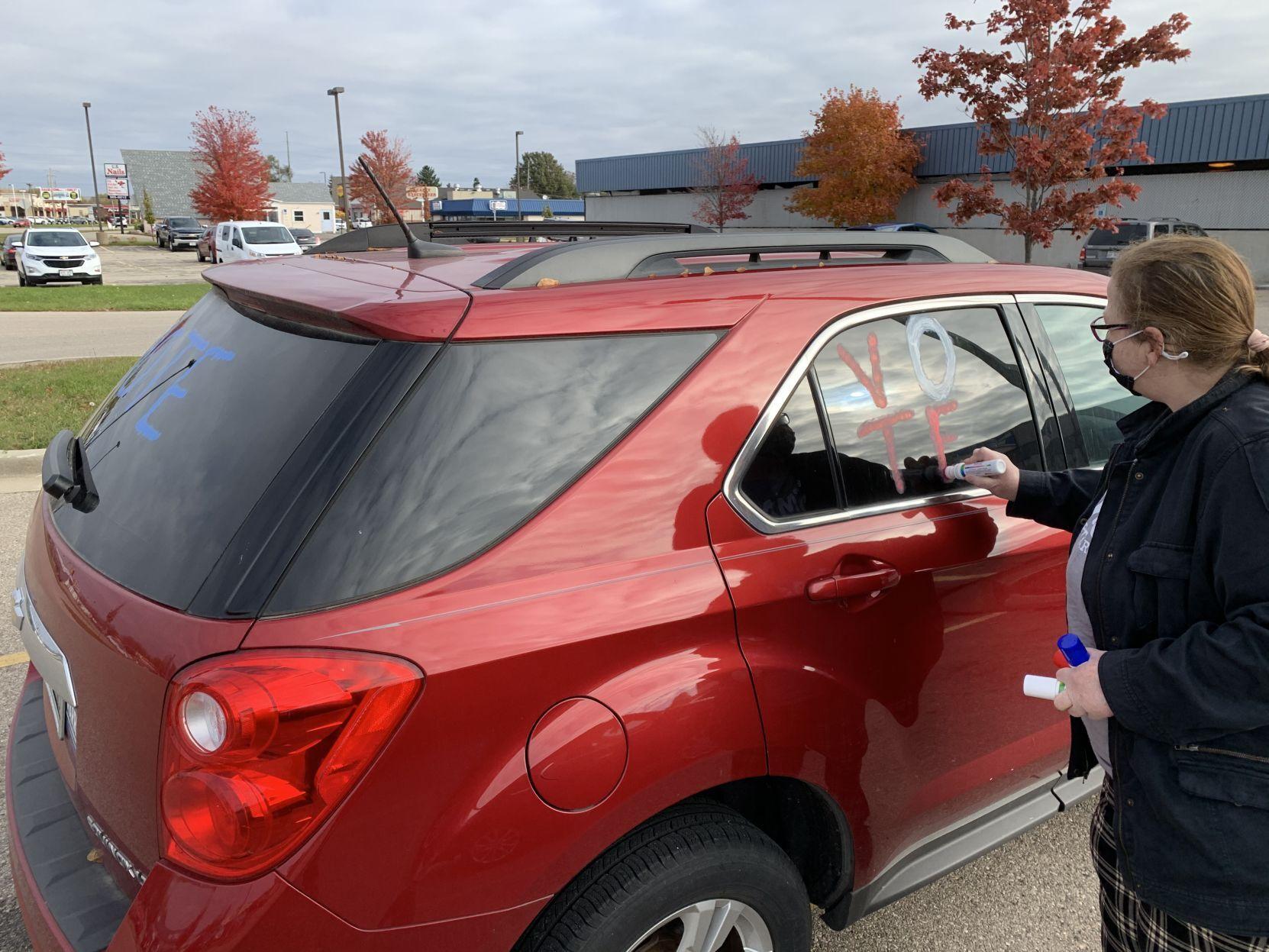 Karen Marino of Janesville decorates her car Saturday morning at the Janesville Post Office before a ‘Pack the Polls’ car parade encouraging people to vote.

Clerks in other cities, villages and towns set their own hours; contact them for information. Or go to myvote.wi.gov, click on "Vote absentee," fill in your name and date of birth, and click on "Finding local absentee options."

All voting in Wisconsin requires an approved photo ID.

Voters may also register to vote during early voting or at the polls Nov. 3. Proof of residence is required. For details, go online to myvote.wi.gov or call your municipal clerk’s office.

This solar farm on Alliant’s Rock River energy campus in the town of Beloit produces 2.3 megawatts. Alliant does not own the farm but buys all its power for Alliant customers. Alliant plans several other solar farms for the area, part of a nationwide boom in solar energy.

Support posts for solar panels have been driven into the ground and workers are running wiring through trenches for the 4-megawatt solar farm under construction near the Alliant Energy West Riverside plant on Walters Road in the town of Beloit. The solar farm is expected to go online by spring 2021.

Workers on Friday run wiring through trenches for the 4-megawatt solar farm under construction near the Alliant Energy West Riverside plant on Walters Road in the town of Beloit. The solar farm, one of several planned for the area, is expected to go online by spring 2021.

Solar power is busting out all over.

Fields of solar collectors are set to spring up across Rock and surrounding counties in the near future, helping reduce reliance on fossil fuels.

Alliant Energy said this week it plans to build two new solar farms, one west of Beloit and one north of Brodhead. They would start producing electricity by the end of 2023.

The Beloit-area site will be about 500 acres. It straddles Highway 213 and is called the Paddock site, named after the substation located about a mile away that will receive its energy, said Ben Lipari, Alliant’s director of resource development.

The other site, about 400 acres, is called the Albany site. 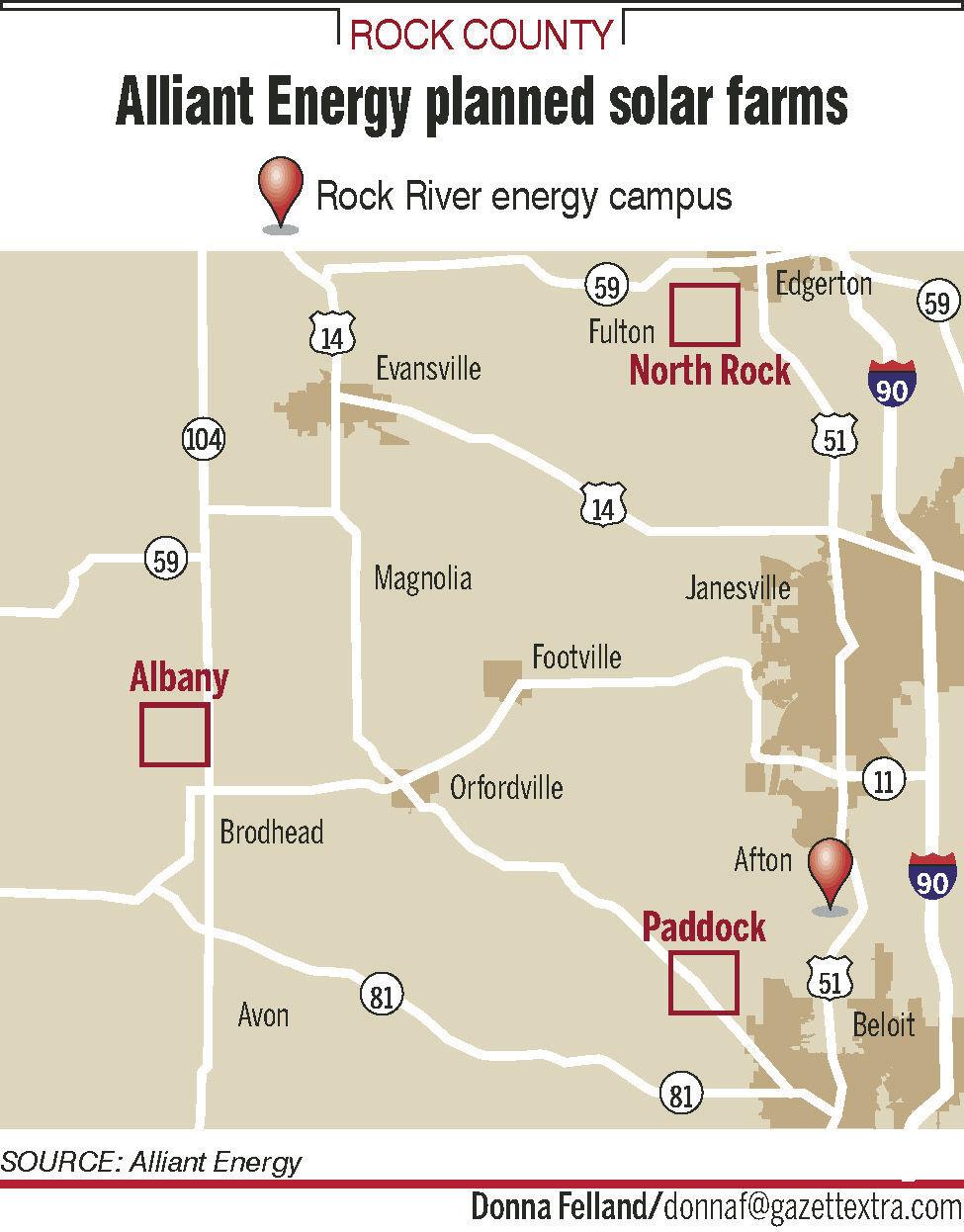 Alliant officials wouldn’t give the exact locations because land purchases are not complete.

Alliant also will acquire the North Rock solar project in the town of Fulton from developer Geronimo Energy, Lipari said.

The utility plans to start building the North Rock site in 2022, Lipari said.

The state Public Service Commission still must approve the North Rock site and the two newly announced projects, but it hasn’t turned down any major solar projects in the past 18 months, said Heather Allen, executive director of Renew Wisconsin, which promotes renewable energy.

At the end of 2019, Wisconsin had about 130 megawatts of solar power, including on house rooftops, Allen said. But in the past 18 months, the Public Service Commission has approved 849 megawatts worth of future projects.

“Things are ramping up quite a bit, and there’s more in the development pipeline,” Allen said.

To the east, as previously reported, Chicago-based Invenergy is working to develop a series of interconnected solar projects in the Walworth County towns of Darien and Whitewater and the Rock County town of Bradford.

The local boom in solar echoes nationwide trends. The investor-advice website The Motley Fool said a year ago that solar power sites are being announced at a record pace.

The price of electric power produced by solar panels is lower than building a new fossil-fuel plant, which is attracting the utilities’ interest, according to The Motley Fool.

The cost to install solar is at an all-time low and will likely drop further as more efficient technologies become available, Alliant says.

The credits disappear for residential projects in 2023, but commercial projects still will enjoy a 10% credit.

The two sites announced this week were developed by Capital Dynamics, an asset-management firm, and Tenaska, an energy company. They announced the sale to Alliant on Wednesday.

Alliant has been buying solar power from a 2.3-megawatt solar facility run by Hanwha Q Cells USA since 2016, according to the company’s website. It’s located near the former coal-fueled Rock River Generating Station off Townline Road in the town of Beloit.

Solar farms depend on sunshine, of course, so utilities, including Alliant, maintain power plants to produce energy when the sun isn’t shining. The new 730-megawatt West Riverside Energy Center, just west of the old power plant, is an example.

Another solar farm, generating 4 megawatts, is being built next to the West Riverside plant and should go online next spring, Alliant spokesman Scott Reigstad said. 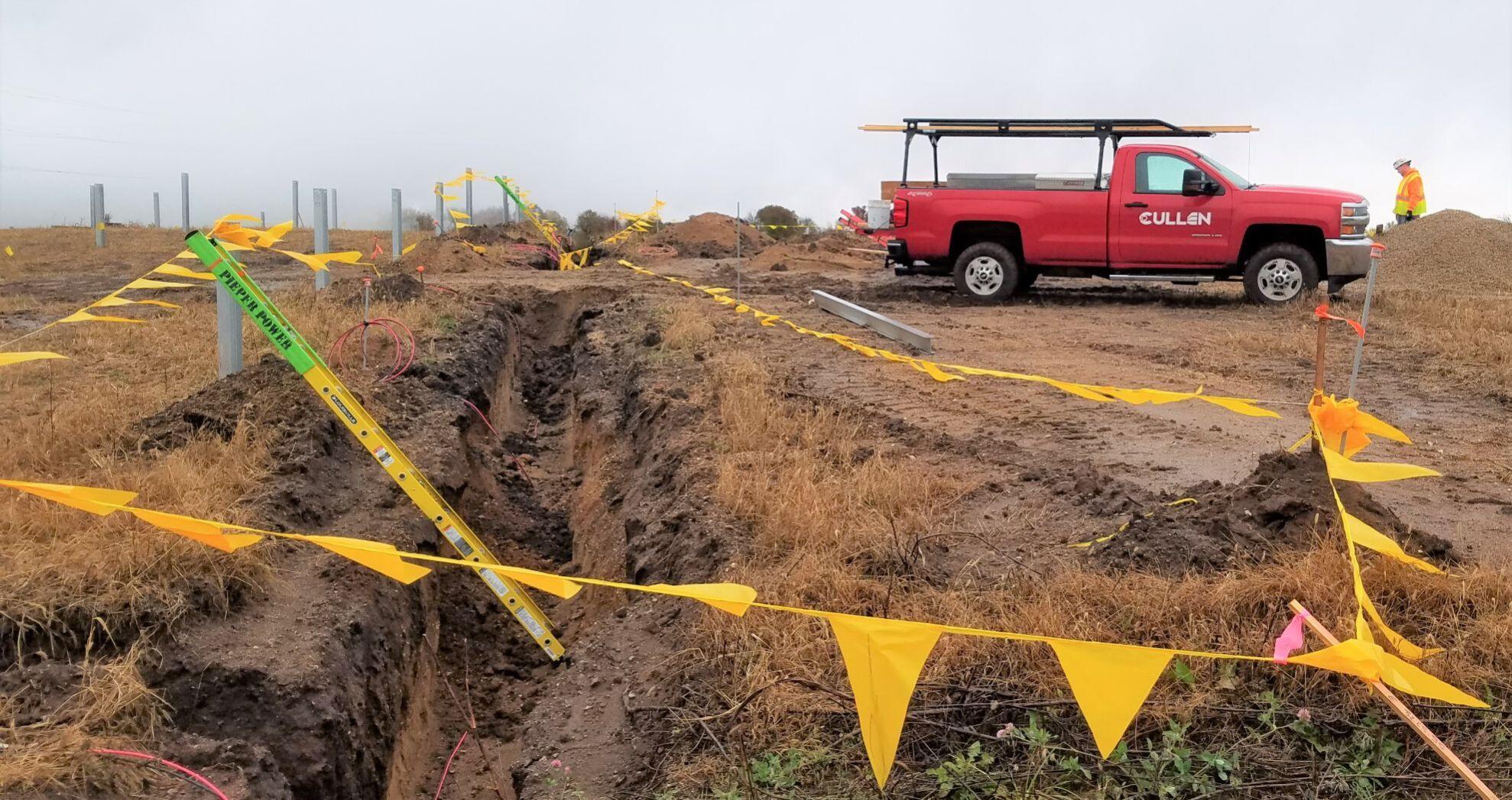 Workers on Friday run wiring through trenches for the 4-megawatt solar farm under construction near the Alliant Energy West Riverside plant on Walters Road in the town of Beloit.

Electric utility power-producing facilities pay taxes to the state, which distributes the money to local governments as revenue.

The state Public Service Commission on Jan. 30 approved a 1,200-acre, 149-megawatt site in Jefferson County, which will mean about $348,000 annually for the county and $248,000 divided between the towns of Jefferson and Oakland, according to Renew Wisconsin.

Alliant has set a goal of 1,000 megawatts from solar by the end of 2023. If that happens, more than 20% of the utility’s Wisconsin generating capacity will be solar, Reigstad said.

The utility has already applied to the Public Service Commission for projects that total 675 megawatts, including the 50 megawatts from the North Rock site.

Alliant plans to apply for more sites next year, including the two newly announced sites, Lipari said. The Paddock site would add 65 megawatts to the total, and Albany would add 50, he said. Combined, that’s enough to power 30,000 homes, according to Wednesday’s announcement.

Objections to solar power include removal of land from agricultural production and the problem of disposal of the equipment after its life ends in 20 to 30 years.

Renew Wisconsin estimates the state would need only 0.3% of its land in solar farms to supply half the state’s energy needs.

Solar farms can return to crop production, Allen said, and in the meantime they can be planted with pollinator-friendly plants or grasses that enhance soil quality.

Disposing of used-up solar panels and steel posts are a problem that U.S. producers are just beginning to consider, Allen said. They can be recycled, but the infrastructure to do so is lacking so far. 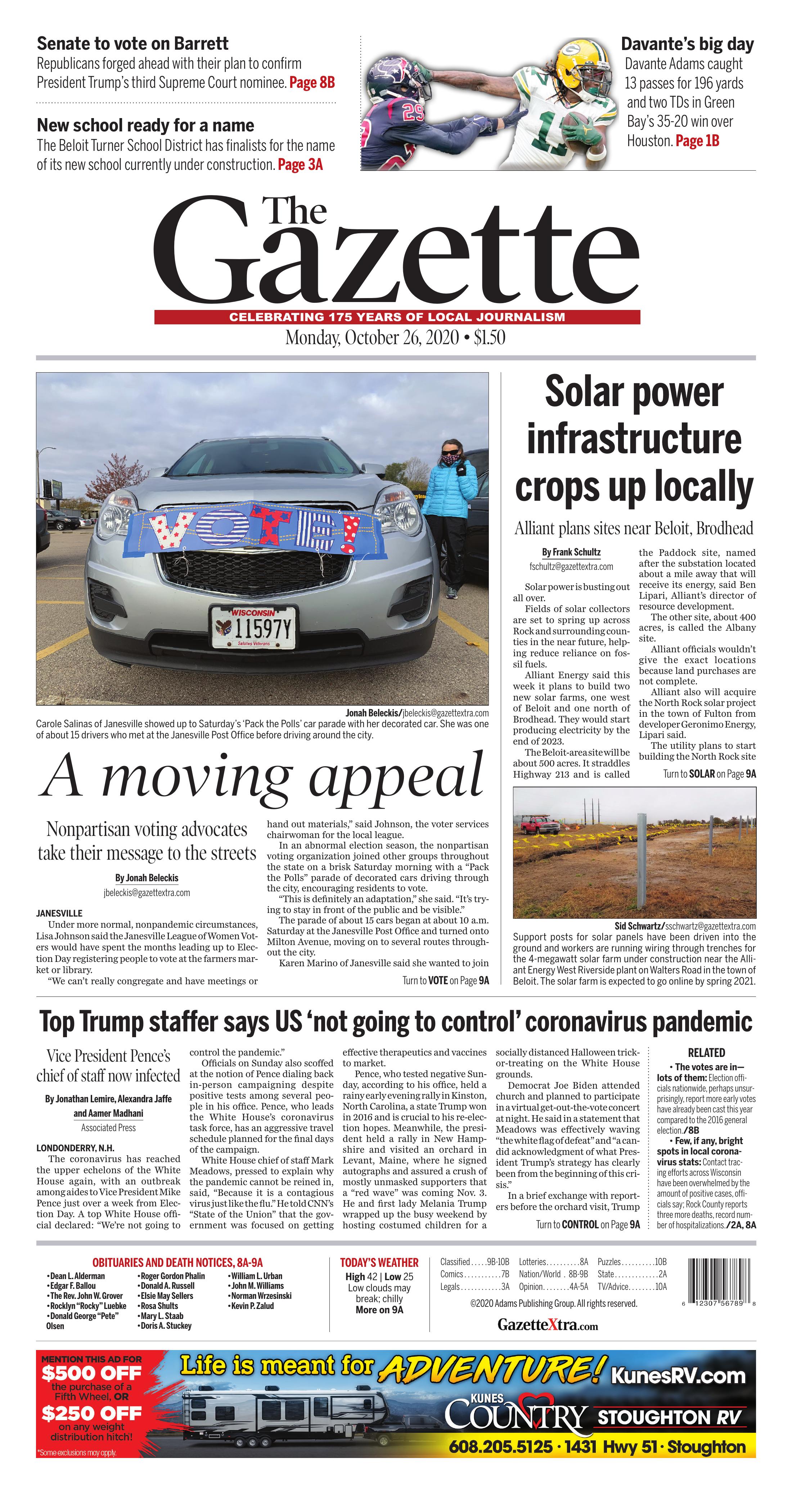