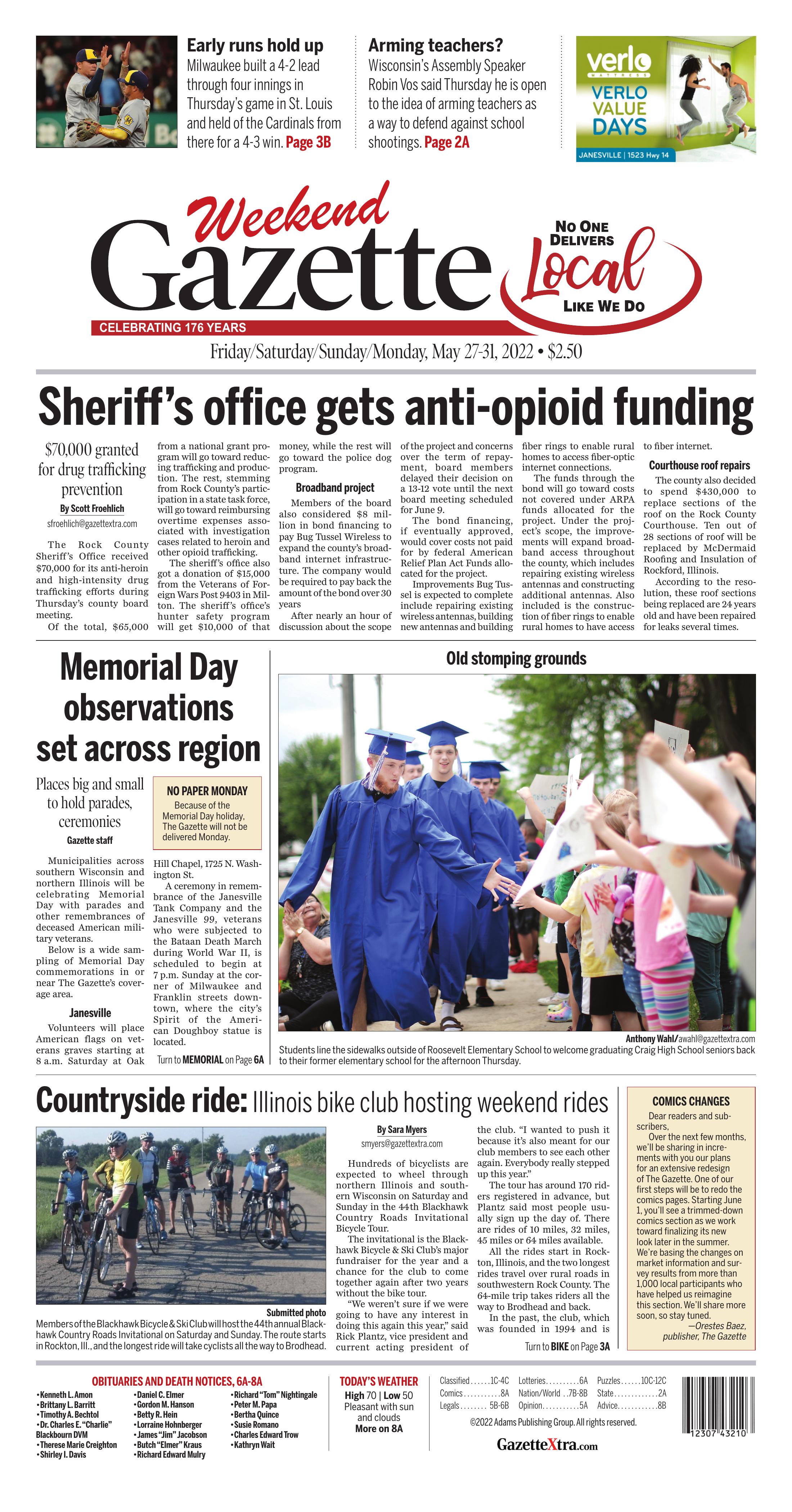 The Rock County Sheriff’s Office accepted $70,000 for its anti-heroin and high-intensity drug trafficking efforts during Thursday’s county board meeting.

Of the total, $65,000 from a national grant program will go toward reducing trafficking and production. The rest, stemming from Rock County’s participation in a state task force, will go toward reimbursing overtime expenses associated with investigation cases related to heroin and other opioid trafficking.

The sheriff’s office also received a donation of $15,000 from the Veterans of Foreign Wars Post 9403 in Milton. The sheriff’s office’s hunter safety program will get $10,000 of that money, while the rest will go toward the police dog program.

The board also considered issuing $8 million in bond financing to pay Bug Tussel Wireless to expand the county’s broadband internet infrastructure. The company would be required to pay back the amount of the bond over 30 years

After nearly an hour of discussion about the scope of the project and concerns over the term of repayment, board members vote 13-12 to delay a decision until the next board meeting scheduled for June 9.

The bond financing, if eventually approved, would cover costs not paid for by federal American Rescue Plan Act (ARPA) funds allocated for the project.

The funds through the bond will go toward costs not covered under ARPA funds allocated for the project. Under the project’s scope, the improvements will expand broadband access throughout the county, which includes repairing existing wireless antennas and constructing additional antennas. Also included is the construction of fiber rings to enable rural homes to have access to fiber internet.

The county board also decided to spend $430,000 to replace sections of the roof on the Rock County Courthouse. Ten out of 28 sections of roof will be replaced by McDermaid Roofing and Insulation of Rockford, Illinois.

According to the resolution, the roof sections being replaced are 24 years old and have been repaired for leaks several times. 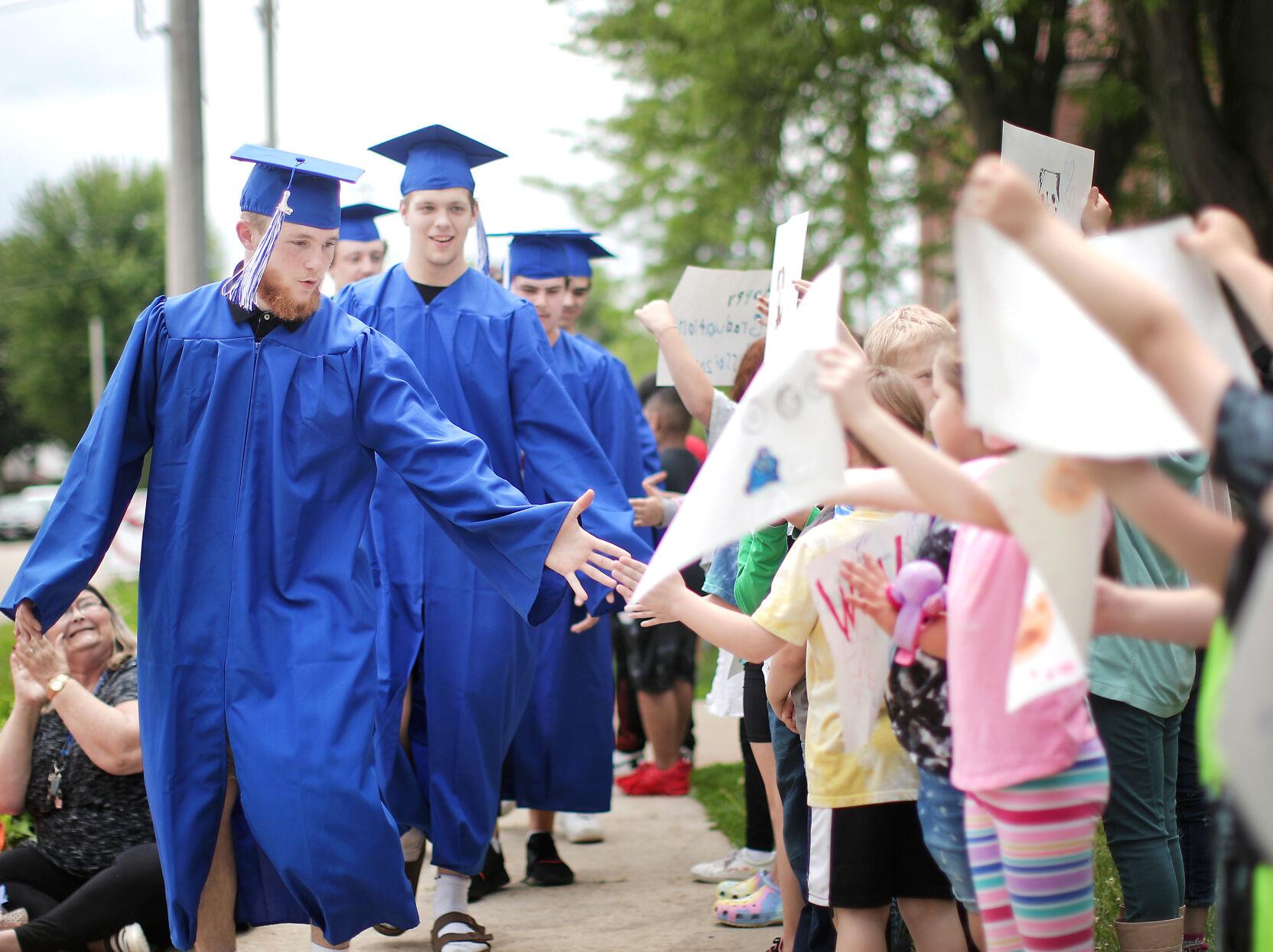 Students line the sidewalks outside of Roosevelt Elementary School to welcome graduating Craig High School seniors back to their former elementary school for the afternoon Thursday.

Members of the Blackhawk Bicycle & Ski Club will host the 44th annual Blackhawk Country Roads Invitational on Saturday and Sunday. The route starts in Rockton, Ill., and the longest ride will take cyclists all the way to Brodhead.

Hundreds of bicyclists are expected to wheel through northern Illinois and southern Wisconsin on Saturday and Sunday in the 44th Blackhawk Country Roads Invitational Bicycle Tour.

The invitational is the Blackhawk Bicycle & Ski Club’s major fundraiser for the year and a chance for the club to come together again after two years without the bike tour.

“We weren’t sure if we were going to have any interest in doing this again this year,” said Rick Plantz, vice president and current acting president of the club. “I wanted to push it because it’s also meant for our club members to see each other again. Everybody really stepped up this year.”

The tour has around 170 riders registered in advance, but Plantz said most people usually sign up the day of. There are rides of 10 miles, 32 miles, 45 miles or 64 miles available.

All the rides start in Rockton, Illinois, and the two longest rides travel over rural roads in southwestern Rock County. The 64-mile trip takes riders all the way to Brodhead and back.

In the past, the club, which was founded in 1994 and is based in Rockford, Illinois, has donated the funds raised to the Rockford Police Department, Rock Cut Rangers in Machesney Park, Illinois, and Rockford Environmental Science Academy Middle School.

For the bike tour itself, the club makes sure to have plenty of staff and volunteers at all three rest stops. The stops have water, fruit, and peanut butter and jelly sandwiches.

Maps of the routes are available, and organizers make sure riders travel with a GPS. All bikers register on a national site where they can enter their phone numbers and get turn-by-turn information while they’re out on the routes.

At the end of the tour at the Greater Rockton Center, 302 W. Main St., all participants receive a pasta dinner provided by the club. Club members also make homemade cookies and cakes for the dinner as well, so all riders can get some nourishment back in their bodies.

“I grew up in the country,” Plantz said. “I always like to ride bikes, and then you get older. Friends of mine got me to join back in. I’ve been in the club around 20 years. A good friend asked me to join, and I’ve been in ever since. I’ve been vice president for the last four or five years.”

Over the last couple of years, the club has expanded to skiing, hiking and kayaking. Plantz said bike rides are held almost every day. This year’s invitational will see people from Indiana, Iowa, Wisconsin and Illinois participating.

Online and mail-in registration ended May 24, but riders can sign up on the day of the ride at the Rockton Center, according to Plantz. More information can be found at the club’s website, blackhawk bicycleclub.org.

Pat Riley carries the American flag to the end of the veteran’s section of Oak Hill Cemetery before the start of a Memorial Day ceremony in Janesville on Memorial Day 2021.

Municipalities across southern Wisconsin and northern Illinois will be celebrating Memorial Day with parades and other remembrances of deceased American military veterans.

Below is a wide sampling of Memorial Day commemorations in or near Janesville.

A ceremony in remembrance of the Janesville Tank Company and the Janesville 99, veterans who were subjected to the Bataan Death March during World War II, is scheduled to begin at 7 p.m. Sunday at the corner of Milwaukee and Franklin streets downtown, where the city’s Spirit of the American Doughboy statue is located.

The annual Memorial Day parade will start at 11 a.m. downtown and conclude in Traxler Park where a commemoration ceremony will be held. There will be speakers and a chili luncheon hosted by Veterans of Foreign Wars Post No. 1621.

The United Veterans Memorial Day Parade starts at 9 a.m. Monday in South Beloit, Illinois. The parade will travel north along Blackhawk Boulevard and continue across the state line onto State Street in Beloit. It then turns right onto Grand Avenue and ends near College Street.

A ceremony will follow the parade at East Lawn Cemetery, 2200 Milwaukee Road, Beloit. City Park in South Beloit will hold its own Memorial Day ceremony after the parade.

VFW Post 2708 and American Legion Post 30 are hosting a Memorial Day ceremony at 1 p.m. Monday at the veterans memorial in Central Park. Retired Marine Col. Eugene Schwartzlow will give the keynote address.

The American Legion Post 237 will hold a Memorial Day parade Monday that will start at 9 a.m. at the old lumber company and march to Veterans Memorial Park for a ceremony. Don and Trisha Neal, two Gold Star parents, will speak at the ceremony. The Parkview Band will perform and a firing squad will honor fallen soldiers.

A community Memorial day observance is scheduled for 10:30 a.m. at Parkview Junior/Senior High School 408 W. Beloit St., to be followed by a parade through downtown to the American Legion clubhouse.

A mural will be dedicated at the clubhouse, and a pork chop barbecue will follow.

The Memorial Day parade begins at 9 a.m. Monday at Main Street and Walworth Avenue and proceeds to Grove Cemetery. A ceremony there, led by Mayor Ryan Schroeder, will include a rifle salute and a rendition of taps. Presentations by veterans of Delavan American Legion Post 95 will also be part of the ceremony.

In case of inclement weather, the ceremony will be held at 9:30 a.m. in the Phoenix Middle School auditorium, 414 Beloit St., Delavan.

A Memorial Day parade will begin at 9 a.m. Monday at Veterans Park, 1108 First Center Ave., and proceed to Greenwood Cemetery.

A Memorial Day service will be held at 10 a.m. at Brookwood Elementary School, 630 Kossuth St.

A Memorial Day 5K, 10K and half marathon begins at 10 a.m. Sunday. Registration costs $10 and is free for veterans.

A parade will begin at Beulah Avenue and Main Street and continue to Village Park Square. A Memorial Day observance hosted by American Legion Post 188 and East Troy VFW Post 7501 will follow at 11 a.m. For more information, call 262-470-4694.

The Albany American Legion will host a parade starting at Albany High School at 10:30 a.m. Barbecue chicken will be served afterward.

Death_list
Obituaries and death notices for May 27, 2022