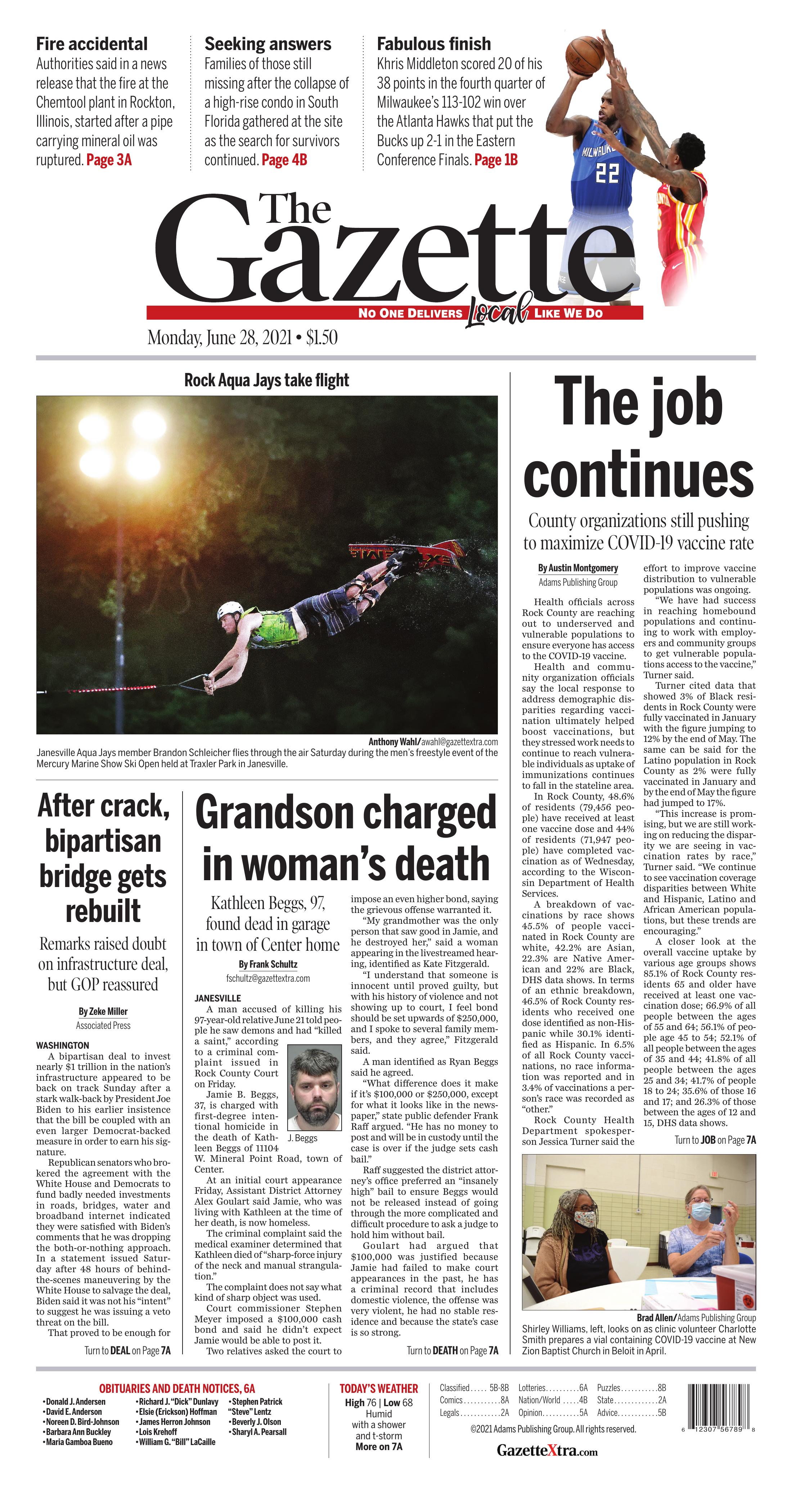 A man accused of killing his 97-year-old relative June 21 told people he saw demons and had “killed a saint,” according to a criminal complaint issued in Rock County Court on Friday.

Jamie B. Beggs, 37, is charged with first-degree intentional homicide in the death of Kathleen Beggs of 11104 W. Mineral Point Road, town of Center.

At an initial court appearance Friday, Assistant District Attorney Alex Goulart said Jamie, who was living with Kathleen at the time of her death, is now homeless.

The criminal complaint said the medical examiner determined that Kathleen died of “sharp-force injury of the neck and manual strangulation.”

The complaint does not say what kind of sharp object was used.

Court commissioner Stephen Meyer imposed a $100,000 cash bond and said he didn’t expect Jamie would be able to post it.

Two relatives asked the court to impose an even higher bond, saying the grievous offense warranted it.

“My grandmother was the only person that saw good in Jamie, and he destroyed her,” said a woman appearing in the livestreamed hearing, identified as Kate Fitzgerald.

“I understand that someone is innocent until proved guilty, but with his history of violence and not showing up to court, I feel bond should be set upwards of $250,000, and I spoke to several family members, and they agree,” Fitzgerald said.

A man identified as Ryan Beggs said he agreed.

“What difference does it make if it’s $100,000 or $250,000, except for what it looks like in the newspaper,” state public defender Frank Raff argued. “He has no money to post and will be in custody until the case is over if the judge sets cash bail.”

Raff suggested the district attorney’s office preferred an “insanely high” bail to ensure Beggs would not be released instead of going through the more complicated and difficult procedure to ask a judge to hold him without bail.

Goulart had argued that $100,000 was justified because Jamie had failed to make court appearances in the past, he has a criminal record that includes domestic violence, the offense was very violent, he had no stable residence and because the state’s case is so strong.

Meyer, noting Beggs’ reported statements about demons and the victim being a martyr, said Beggs “represents a danger to the public that I can’t see could be much higher.”

Meyer said the danger he poses justified the high bail.

The following is the series of events the morning of Kathleen’s death, as described in the complaint.

A man that sheriff’s deputies have described as a relative, and who is called Victim 2 in the complaint, came to the rural residence, something he said he did each morning to take a newspaper from the mailbox to Kathleen.

Jamie came out of the house and asked Victim 2 if he could see the demons. Victim 2 entered the house, saw a couch had been moved to the kitchen and heard Jamie say there were demons in the house.

When sheriff’s deputies arrived, Jamie was holding his head with both hands, saying, “The demons are in my head” and “She couldn’t take it.”

Deputies took Jamie into custody, initially labeling him a person of interest.

Jamie reportedly told a detective at the sheriff’s office that he wanted to remain silent until he had a lawyer present. But some time later, as a detective came to take a DNA sample, Jamie made “spontaneous utterances.”

The detective taking the sample said they were investigating a homicide, and Jamie responded, “There’s no homicide” and then made statements laced with vulgarities to the effect that “she” was a martyr and a saint and that he had saved her soul.

“Really? And you’re charging me with murder?” Jamie added.

A preliminary hearing in the case is set for Tuesday, July 6.

Health officials across Rock County are reaching out to underserved and vulnerable populations to ensure everyone has access to the COVID-19 vaccine.

Health and community organization officials say the local response to address demographic disparities regarding vaccination ultimately helped boost vaccinations, but they stressed work needs to continue to reach vulnerable individuals as uptake of immunizations continues to fall in the stateline area.

“We have had success in reaching homebound populations and continuing to work with employers and community groups to get vulnerable populations access to the vaccine,” Turner said.

“This increase is promising, but we are still working on reducing the disparity we are seeing in vaccination rates by race,” Turner said. “We continue to see vaccination coverage disparities between White and Hispanic, Latino and African American populations, but these trends are encouraging.”

“I think the reduction in COVID-19 spread that we are seeing in Rock County is due to the current level of vaccination that has occurred,” Turner said. “Anyone who isn’t vaccinated has a risk of contracting COVID-19 and potentially becoming severely ill, so that is always going to be a concern.”

In Beloit, 34% of all infections come from people between the ages of 15 and 34. An ethnicity breakdown of cases in Beloit shows that 28% were by Hispanic and Latino residents. In terms of race, 71% of Beloit cases were white, 14% listed as “other,” 13% Black and 1% for both American Indian and Asian residents, health department data shows.

In Janesville, 35% of all infections come from people between the ages of 15 and 34. An ethnicity breakdown of cases in Janesville shows that 11% were by Hispanic and Latino residents. In terms of race, 88% of Janesville cases were white, 5% listed as “other,” 4% Black and 2% for Asian residents, the health department reports.

The highest disparities of vaccination rates exist in Black and Hispanic communities, where Black, Hispanic and Latino residents are far less likely to be vaccinated compared to white residents, according to DHS demographic data.

Organizations such as Community Action of Rock and Walworth Counties, HealthNet of Rock County and Beloit Area Community Health Center also worked together with various groups in Beloit and Janesville to provide vaccine access to residents hesitant to get the shot.

Through a coordinated effort, vaccine clinics were held at various locations—from churches to grocery stores—to reach those least likely to have access to the vaccine.

“We saw that grassroots organizing really helped us connect with more residents,” Perry said. “We moved away from the model that ‘If you build it they will come.’ We’ve always had that focus and the pandemic brought so many public and private groups together in working towards the same goal.”

Going forward, Perry said he hoped organizations would continue to work together in concert to address systemic issues of discrimination, gun violence and affordable housing inequities.

“We can address these issues with the same grassroots approach,” Perry said. “This coordinated effort continues to show that we have the ability to address major issues in our community when we pool our resources, both human and financial, towards a common goal. We have proven that ability to do that, but we need to sustain it.”

HealthNet CEO Ian Hedges said due to a lack of an organized federal response to vaccine distribution in December of 2020, it fell upon local organizations to reach people with limited access to health care and the vaccine.

“There was very much a breakdown among traditional health systems and groups of people that are marginalized in seeking the vaccine,” Hedges said. “People without health insurance are more likely to get discouraged by the system if they don’t get an answer right away. We make sure to prioritize individuals at various neighborhoods in Rock County to find people who needed our help the most.”

Beloit served as a model for targeted vaccine outreach in Rock County, highlighting the success of various clinics around the city.

“It really showed that municipalities had a major role to play in making connections with residents,” Hedges said. “Meeting people where they are, rather than forcing them to seek out the vaccine, was vital in reaching people.”

“We found that the first step for a lot of people was the most challenging in pursuing vaccinations,” Hedges said.