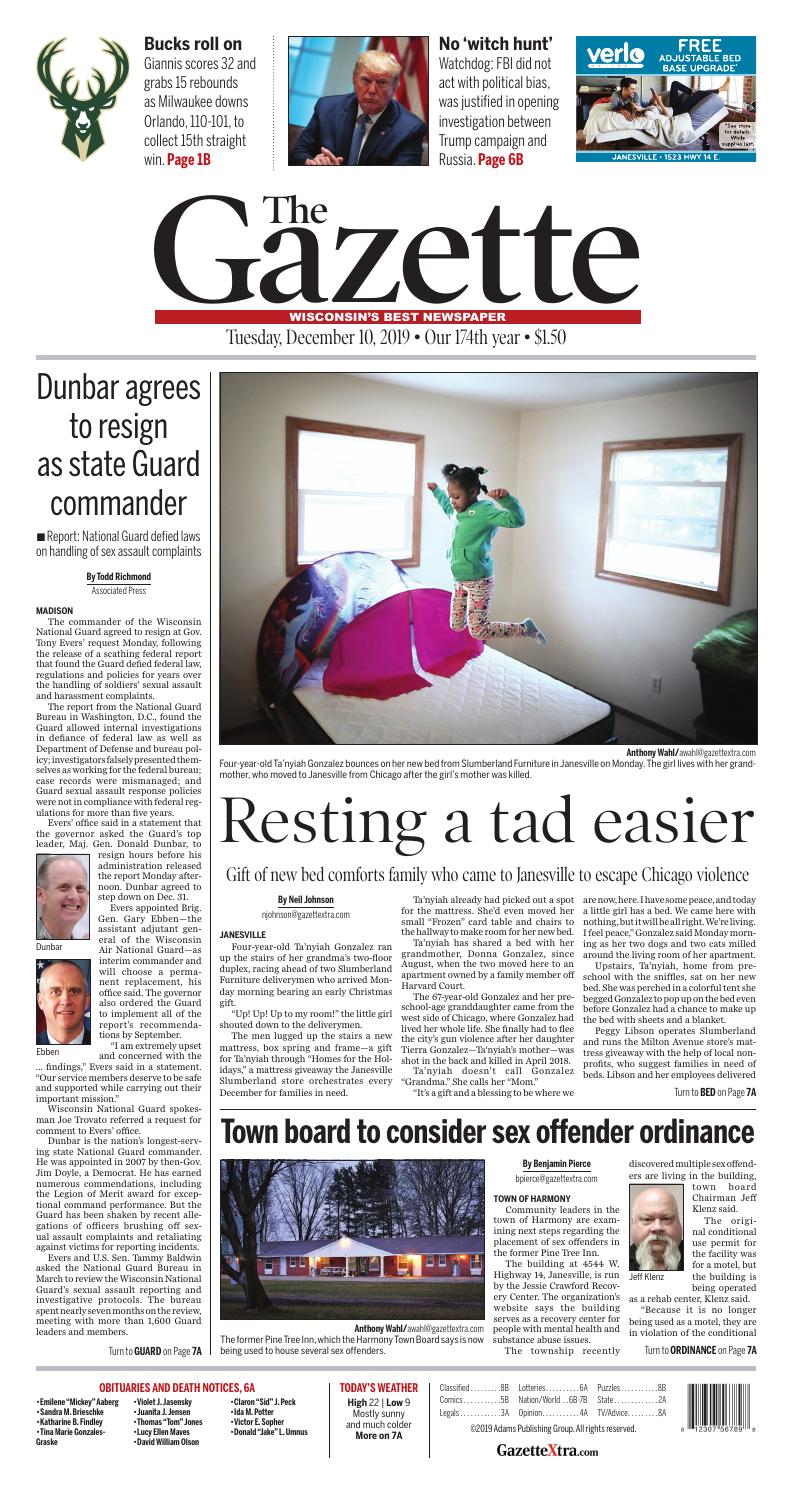 Four-year-old Ta’nyiah Gonzalez bounces on her new bed from Slumberland Furniture in Janesville on Monday. The girl lives with her grandmother, who moved to Janesville from Chicago after the girl’s mother was killed.

“Up! Up! Up to my room!” the little girl shouted down to the deliverymen.

The men lugged up the stairs a new mattress, box spring and frame—a gift for Ta’nyiah through “Homes for the Holidays,” a mattress giveaway the Janesville Slumberland store orchestrates every December for families in need.

Ta’nyiah already had picked out a spot for the mattress. She’d even moved her small “Frozen” card table and chairs to the hallway to make room for her new bed.

Ta’nyiah has shared a bed with her grandmother, Donna Gonzalez, since August, when the two moved here to an apartment owned by a family member off Harvard Court.

The 67-year-old Gonzalez and her preschool-age granddaughter came from the west side of Chicago, where Gonzalez had lived her whole life. She finally had to flee the city’s gun violence after her daughter Tierra Gonzalez—Ta‘nyiah’s mother—was shot in the back and killed in April 2018.

“It’s a gift and a blessing to be where we are now, here. I have some peace, and today a little girl has a bed. We came here with nothing, but it will be all right. We’re living. I feel peace,” Gonzalez said Monday morning as her two dogs and two cats milled around the living room of her apartment.

Upstairs, Ta’nyiah, home from preschool with the sniffles, sat on her new bed. She was perched in a colorful tent she begged Gonzalez to pop up on the bed even before Gonzalez had a chance to make up the bed with sheets and a blanket. 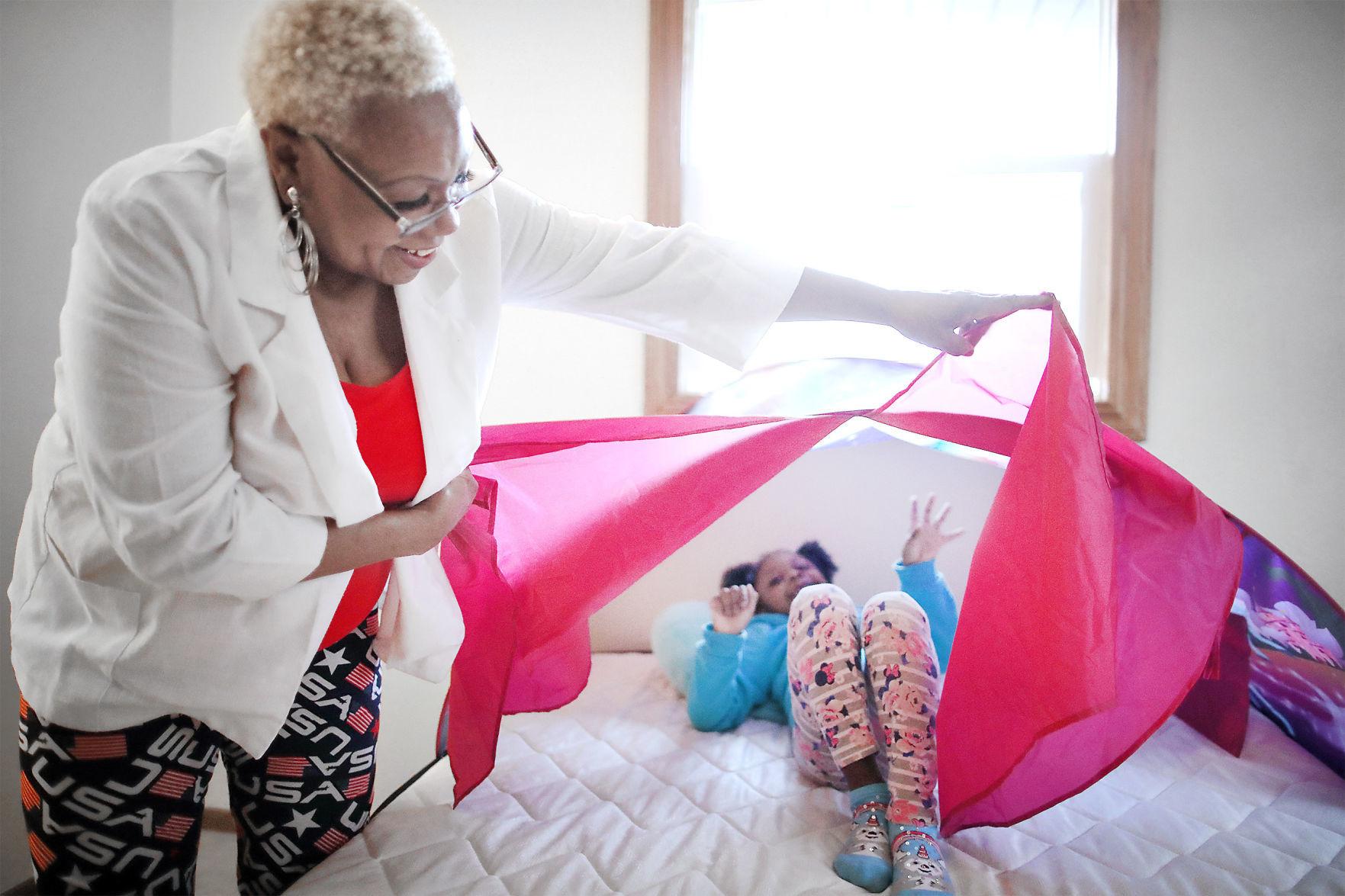 Donna Gonzalez opens up a small canopy for her 4-year-old granddaughter, Ta’nyiah Gonzalez, to lie under as she tests her new mattress and box spring from Slumberland Furniture on Monday in Janesville.

Peggy Libson operates Slumberland and runs the Milton Avenue store’s mattress giveaway with the help of local nonprofits, who suggest families in need of beds. Libson and her employees delivered 43 beds in Janesville on Monday.

Libson said even after a decade of running the mattress giveaway in Janesville, she seldom hears stories like Gonzalez’s.

“So often, people might not say much,” Libson said. “You’re a stranger bringing over a new bed. It’s overwhelming maybe. Often, they say ‘thank you,’ and we go. To get a chance to see into someone’s life when you do this, it’s very special.”

Gonzalez is finding equilibrium in her life even as she continues to mourn the loss of her daughter, who Gonzalez said was inseparable from Ta’nyiah.

Tierra, 30, was shot April 21, 2018, as she sat in her car on West Jackson Boulevard and South Lotus Avenue in Chicago’s troubled South Austin neighborhood.

She was dropping off a friend who was returning items to a boyfriend when a man police think was intent on armed robbery approached her car and shot Tierra’s friend in the stomach.

The robber then shot Tierra in the back, killing her almost immediately. He fled.

Ta’nyiah, then 3, was sitting in the car when Tierra was shot. The young girl witnessed the horror of her mother dying, which Gonzalez says has “traumatized” the child.

Ta’nyiah and Tierra had been on their way to a Saturday afternoon swimming party the day Tierra was killed. She had been taking a short detour to help out her friend on the way to the party. 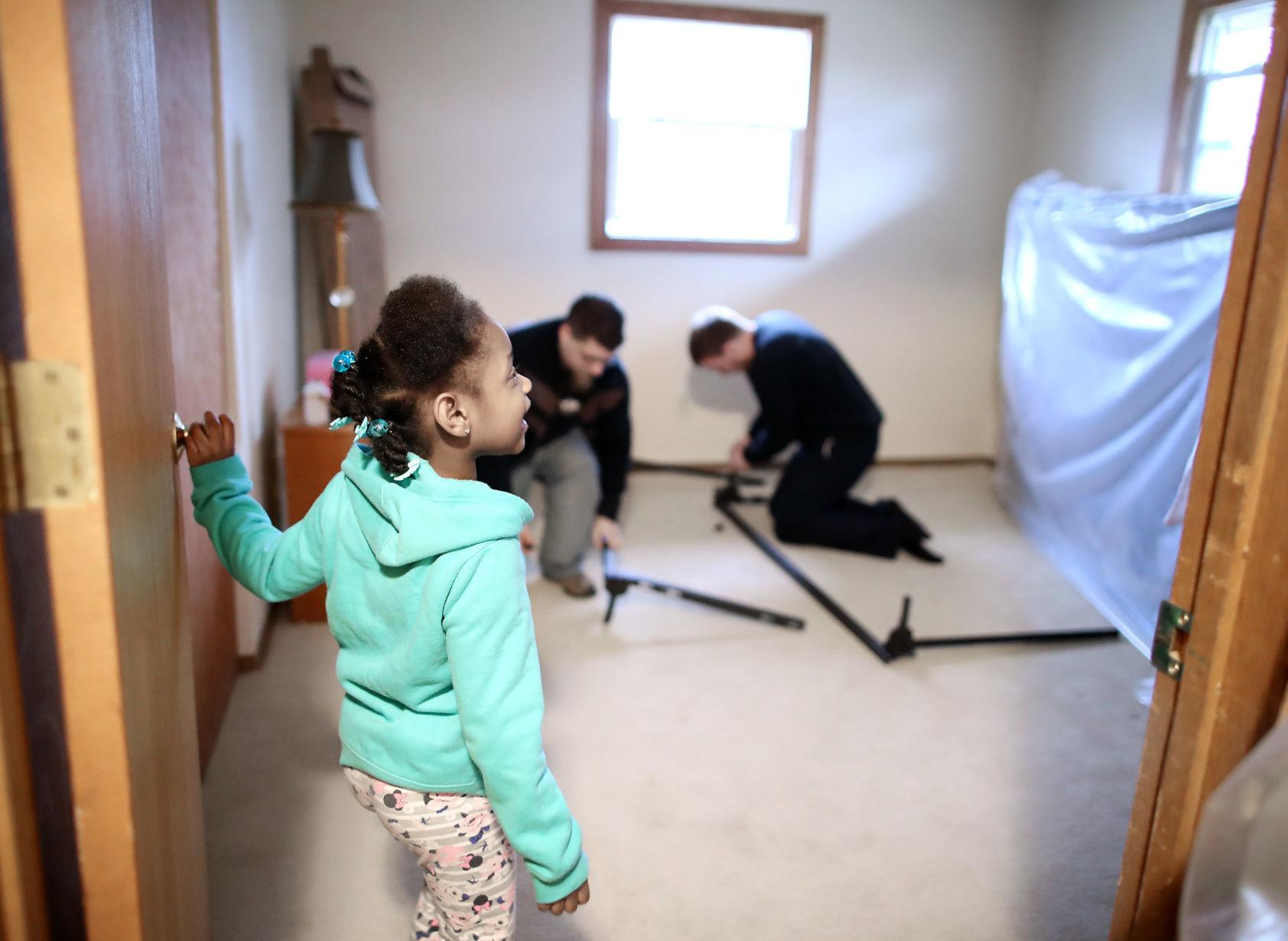 Ta’nyiah Gonzalez, 4, watches as Slumberland employees set up her new bed at her Janesville home Monday.

Gonzalez said the only clues police have in the murder are the ones that most haunt her.

She has seen footage of the shooting from video police recovered from a security camera mounted in the area.

The weekend Tierra was killed, there were 11 other shootings in Chicago—at least three of them fatal. No one has been brought to justice for Tierra’s murder, Gonzalez said.

“I’ve been on the Chicago detectives every week since last year,” Gonzalez said. “Every week I call them. I don’t want my daughter to be just another statistic.”

In Janesville, Gonzalez said she has been able to find comfort in a community with far less violent crime. 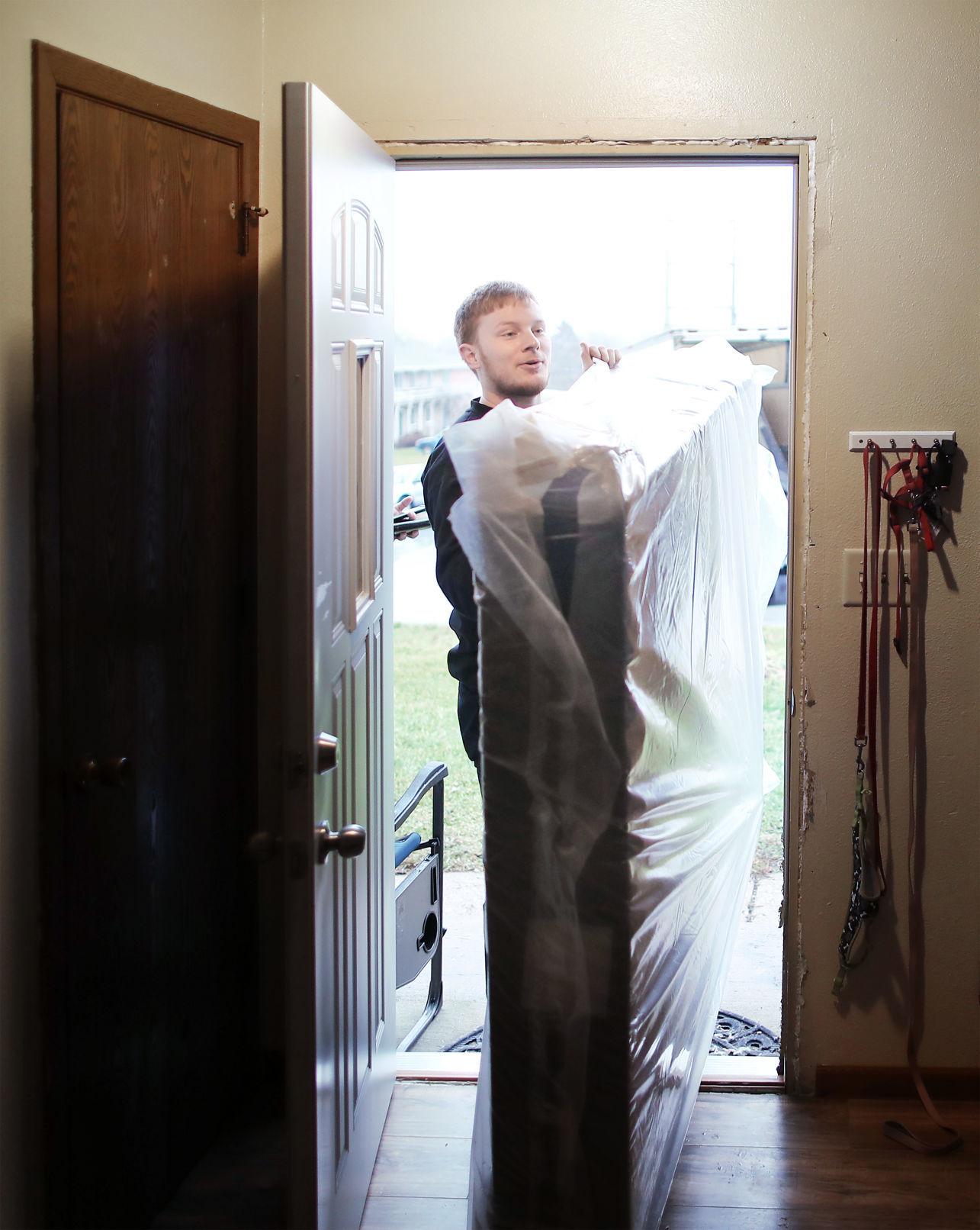 She can take her granddaughter just down the street every day to go swimming and to beginner gymnastics at the downtown YMCA. She doesn’t worry what might happen when Ta’nyiah rides her bike around the apartment’s parking lot.

Gonzalez hadn’t felt comfortable going out at night in Chicago after her daughter was killed. She even quit her job as a ride-share driver over fear of random violence.

She said she feels she and Ta’nyiah can drive to the Milton Avenue Dunkin’ restaurant without fear or uncertainty of what might happen on the way.

“And when you get there, they know who I am,” she said. “They know what I drink like the back of their hand. They know just how I like it. I really love that.”

Gonzalez plans to go to Slumberland to thank the owners for their gift to her family, which she called “unexpected.” She wants the owners to know what their generosity means to her and the little girl she’s raising as her own daughter.

The former Pine Tree Inn, which the Harmony Town Board says is now being used to house several sex offenders.

Community leaders in the town of Harmony are examining next steps regarding the placement of sex offenders in the former Pine Tree Inn.

The building at 4544 W. Highway 14, Janesville, is run by the Jessie Crawford Recovery Center. The organization’s website says the building serves as a recovery center for people with mental health and substance abuse issues.

The original conditional use permit for the facility was for a motel, but the building is being operated as a rehab center, Klenz said.

“Because it is no longer being used as a motel, they are in violation of the conditional use permit,” he said.

Klenz said the last time he checked, up to 10 sex offenders were living in the building. He said the township is looking to create an ordinance that would impose housing restrictions for sex offenders equivalent to state statutes.

The town attorney sent a letter to the center a few months ago notifying the operators of the breach and asking what services were being offered. The town never received a response, Klenz said.

Klenz said the township is open to working with the recovery center to modify the permit or work out something else, but the center’s silence isn’t helping.

At the town board meeting Monday night, board member Matt McNall agreed, saying the recovery center’s silence after the letter is concerning and the township should be in the loop when a sex offender is placed.

“That doesn’t bode well with me,” McNall said.

Town Clerk Tim Tollefson said the township doesn’t receive notifications for placement of sex offenders within town limits unless the offense was violent.

Klenz said the town board realizes that each case is different, and residents might be more comfortable in certain situations.

“Unfortunately, when you put that label on, people think the worst, and I’m sure not all of those offenders are in that type where they (residents) have to worry about them going after the kids next door,” he said.

Regardless, he thinks giving the public more information would help. Klenz said the state or the center answering questions about monitoring, policing and other general information could help residents understand and be more comfortable with the situation.

“I’m fearful that the citizens—when all of a sudden they see in the paper that a sexual offender is going to be located in a particular place because they don’t themselves really know what that consists of—they get frightened, and you can’t blame them,” he said.

Klenz said sexual offenders need a place to go when they are released, but towns should have more knowledge and a say in the process.

“Those people have to stay someplace, but it would just be nice if we could have a little more control,” he said.

The township could take action on the ordinance at its meeting next month. 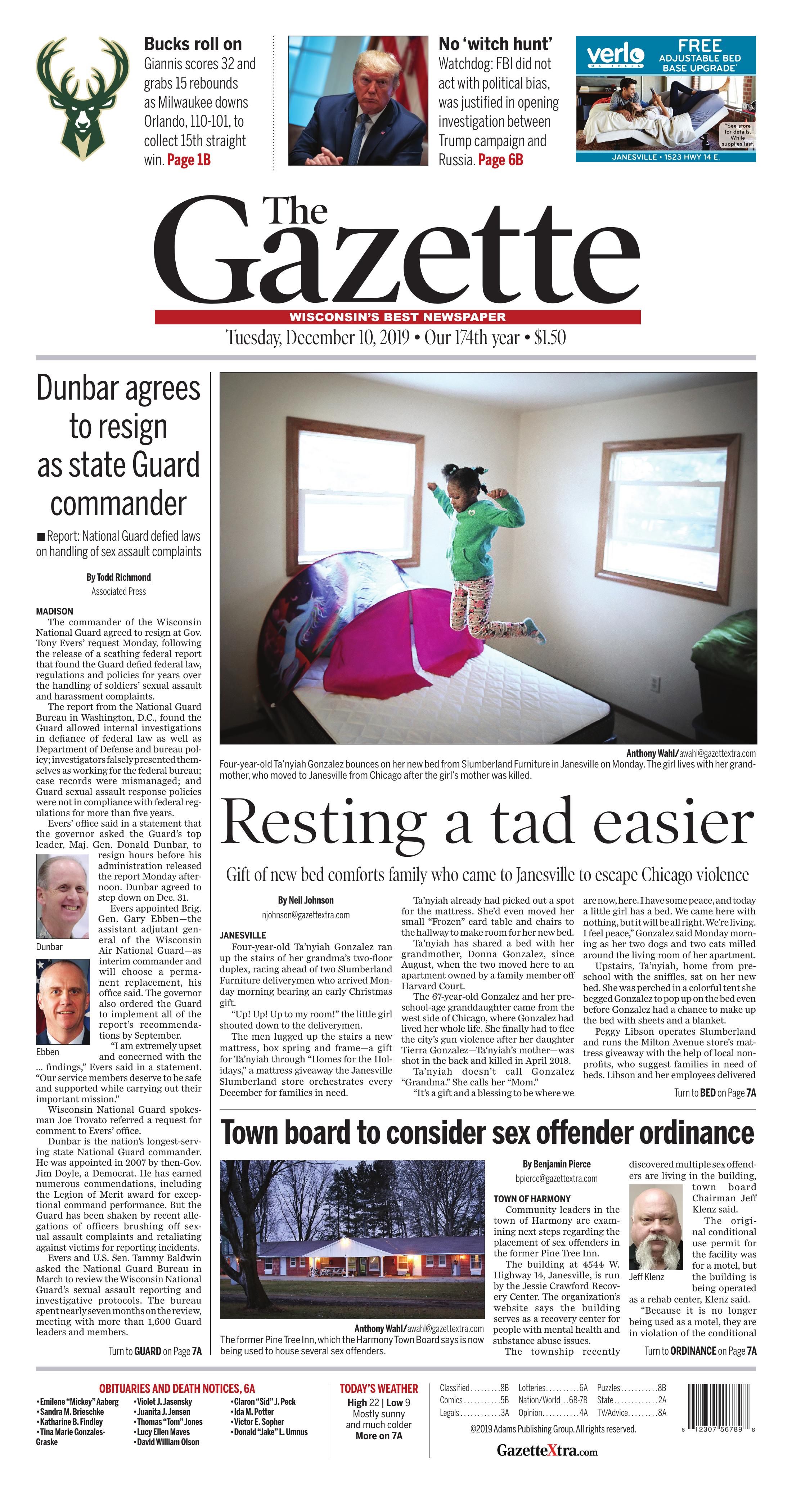