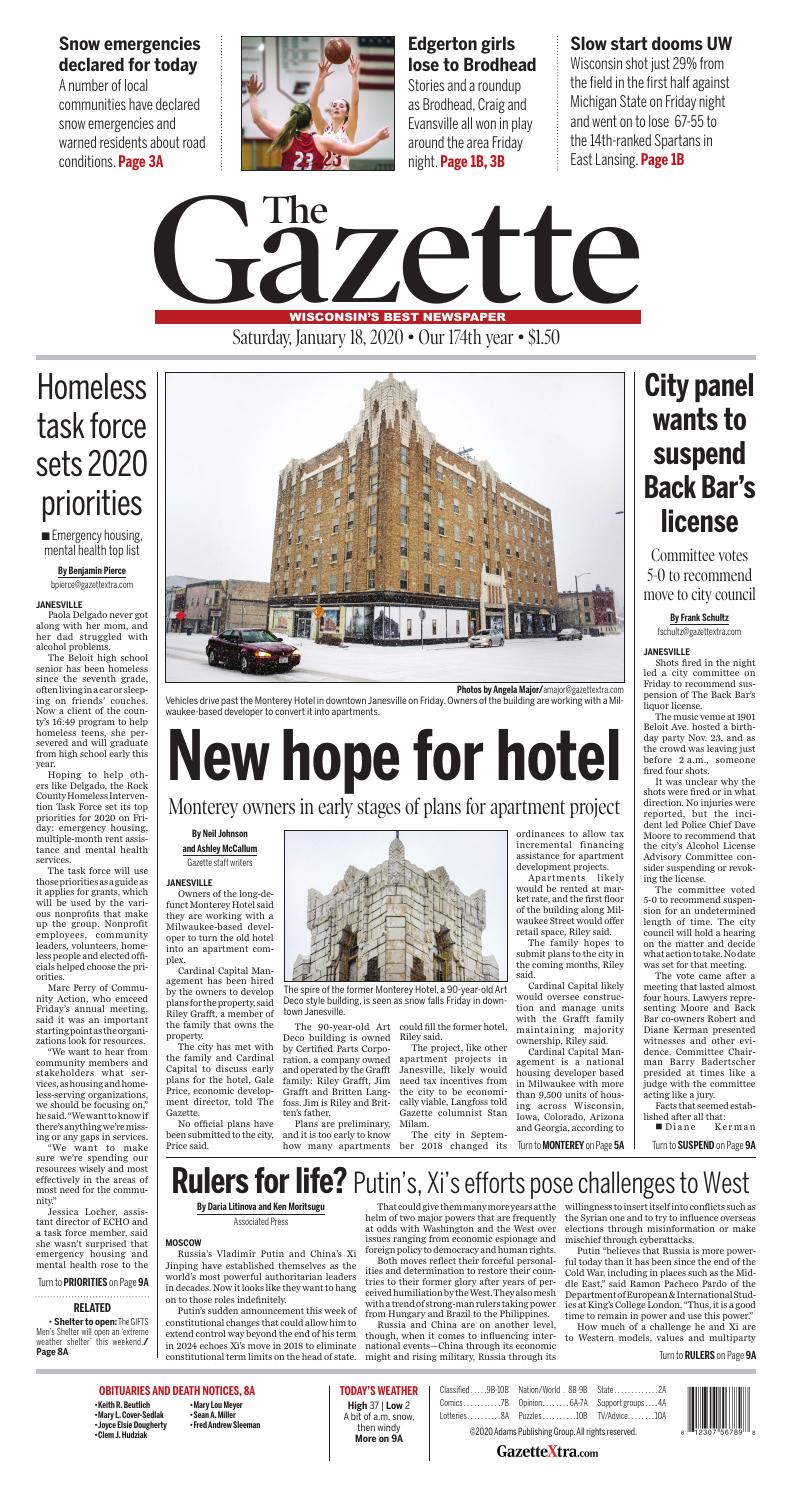 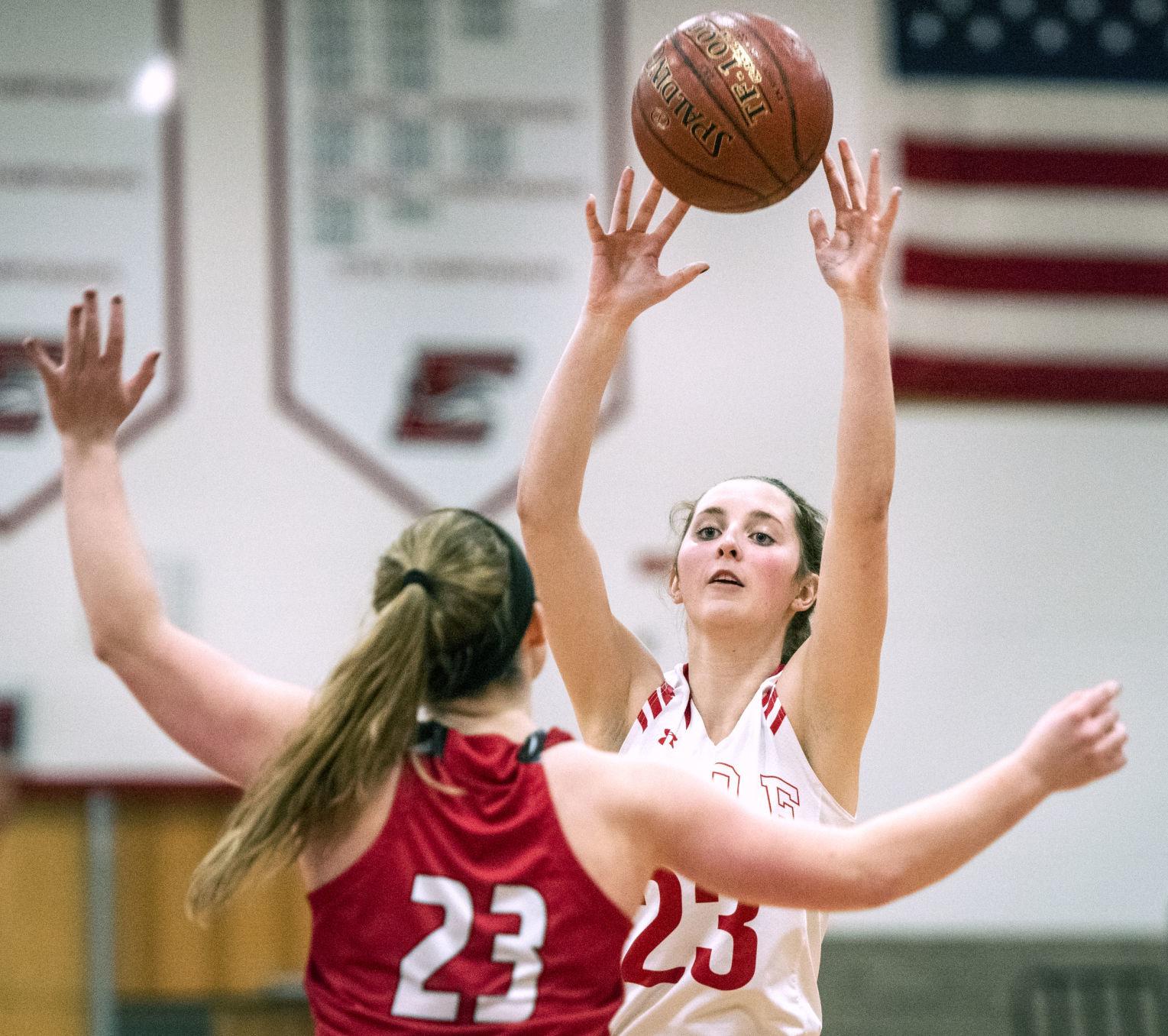 Vehicles drive past the Monterey Hotel in downtown Janesville on Friday. Owners of the building are working with a Milwaukee-based developer to convert it into apartments.

Historical photos of the Monterey Hotel are displayed in the windows of the building Friday.

Owners of the long-defunct Monterey Hotel said they are working with a Milwaukee-based developer to turn the old hotel into an apartment complex.

Cardinal Capital Management has been hired by the owners to develop plans for the property, said Riley Grafft, a member of the family that owns the property.

The city has met with the family and Cardinal Capital to discuss early plans for the hotel, Gale Price, economic development director, told The Gazette.

No official plans have been submitted to the city, Price said.

The 90-year-old Art Deco building is owned by Certified Parts Corporation, a company owned and operated by the Grafft family: Riley Grafft, Jim Grafft and Britten Langfoss. Jim is Riley and Britten’s father.

Plans are preliminary, and it is too early to know how many apartments could fill the former hotel, Riley said.

The project, like other apartment projects in Janesville, likely would need tax incentives from the city to be economically viable, Langfoss told Gazette columnist Stan Milam.

Apartments likely would be rented at market rate, and the first floor of the building along Milwaukee Street would offer retail space, Riley said. 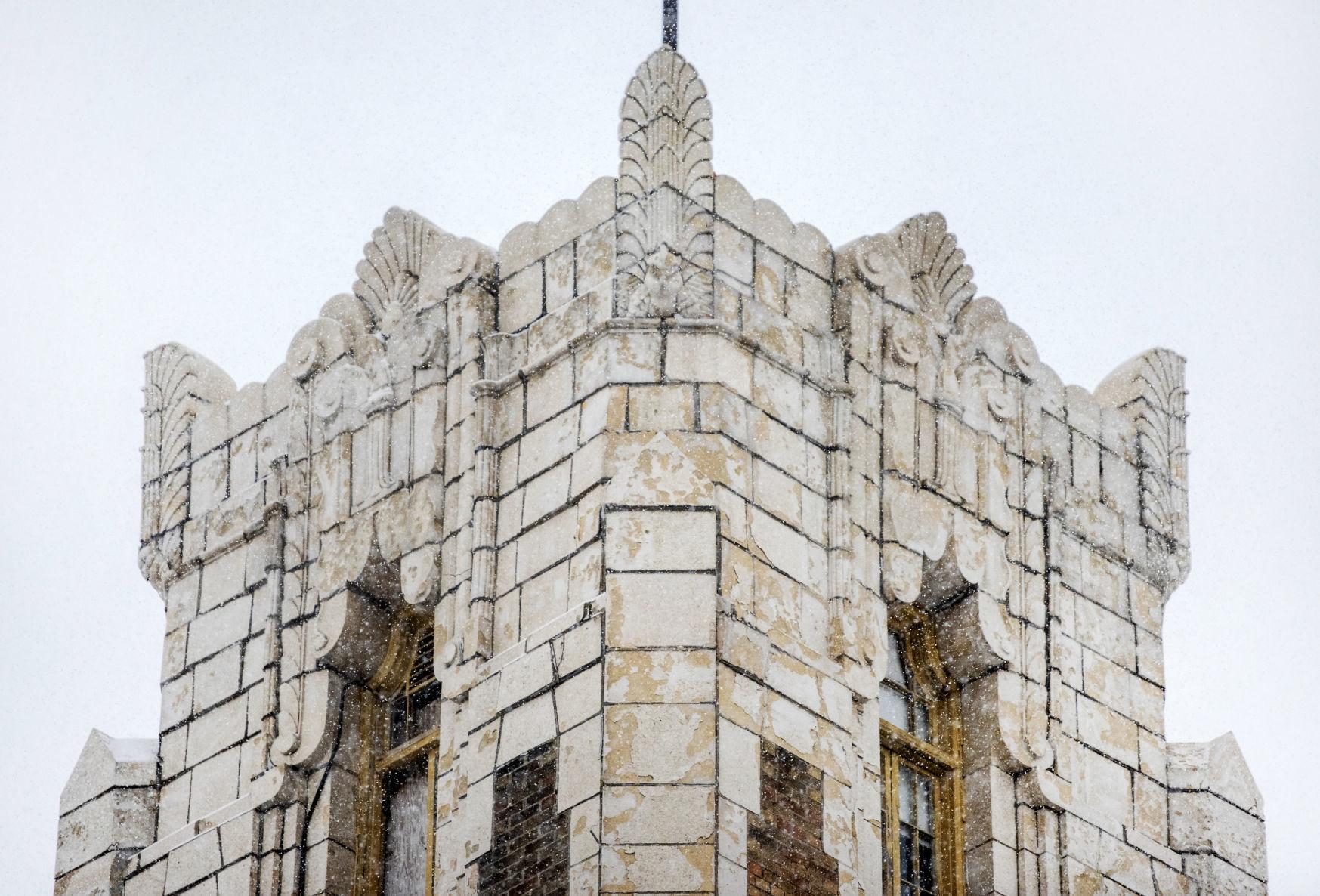 The family hopes to submit plans to the city in the coming months, Riley said.

Cardinal Capital Management is a national housing developer based in Milwaukee with more than 9,500 units of housing across Wisconsin, Iowa, Colorado, Arizona and Georgia, according to the company’s website.

The city is excited about the prospect of having the hotel redeveloped, Price said.

Janesville needs housing units, and an apartment complex would be a good fit for the area, Riley said.

A timeline has not yet been created for the project, Riley said.

Turning the former hotel into apartments is not a new idea.

A history of the hotel compiled by The Gazette shows the Grafft family has considered turning the hotel into apartments since at least 2009.

Plans in 2009 included building 22 apartments, but Grafft said parking was an obstacle.

Parking has continued to be a point of contention between Grafft and the city.

Owner Jim Grafft and the city remain at odds over the future of the Monterey Hotel. And there's no indication they'll agree on a plan to redevelop the building.

Grafft and Langfoss in 2018 told The Gazette the redevelopment of the Monterey Hotel would be done by now if the city cooperated with the owners’ plans to create public-private parking for tenants.

That plan called for the city to pay north of $1 million to help finance the parking lot.

The owners have never formally submitted a project proposal with a TIF request, according to previous Gazette stories.

The owner of the Monterey Hotel has made enough progress on repairs to the hotel that the city will let him keep working through September.

The hotel in 2018 was at risk of being demolished after the city issued a raze- or-repair order because of building code violations.

The order has since been lifted, and the hotel is in compliance with an agreement made with the city in 2018, said Tom Clippert, building director, in an email to The Gazette on Friday.

Janesville police and owners of The Back Bar, 1900 Beloit Ave., have come to an agreement on a liquor-license suspension.

Shots fired in the night led a city committee on Friday to recommend suspension of The Back Bar’s liquor license.

The music venue at 1901 Beloit Ave. hosted a birthday party Nov. 23, and as the crowd was leaving just before 2 a.m., someone fired four shots.

It was unclear why the shots were fired or in what direction. No injuries were reported, but the incident led Police Chief Dave Moore to recommend that the city’s Alcohol License Advisory Committee consider suspending or revoking the license.

The committee voted 5-0 to recommend suspension for an undetermined length of time. The city council will hold a hearing on the matter and decide what action to take. No date was set for that meeting.

The vote came after a meeting that lasted almost four hours. Lawyers representing Moore and Back Bar co-owners Robert and Diane Kerman presented witnesses and other evidence. Committee Chairman Barry Badertscher presided at times like a judge with the committee acting like a jury.

Janesville's Back Bar could lose license for shots-fired incident

Janesville's police chief is calling for a local music venue to lose its liquor license after a shots-fired incident in November.

Facts that seemed established after all that:

“They were intentionally running into each other,” in apparent fear and panic, added Sgt. Jimmy Holford.

“I’ve never seen as chaotic a scene as when I arrived for the shots-fired call that night,” said Rocha, a 10-year veteran of the department, most of that on the night shift when the bars close.Police officers responding to the bar noticed a smell of marijuana. Kerman and his staff said they don’t allow smoking in the bar, although some might have been smoking in an outdoor smoking area, and smoke might have wafted inside.

Kerman, speaking by phone from California, said the event was largely peaceful until the very end and that the problem arose from someone who wasn’t even on his property. He did admit he was wrong with how he handled the event and promised to do better.

“Taking our license even one day is a blemish that will follow us forever,” Kerman said.

Committee member Kevin Riley said he didn’t think revocation was called for because the venue has a good record.

Moore said his top priority is the safety of the community and his officers. The chief said when officers arrived that night, they didn’t know security staff had guns, couldn’t have identified the guards and were looking for a shooter.

That combination of factors “could have had a very tragic outcome,” Moore said.

Riley told Kerman that if an officer had thought one of the guards was the shooter, it could have become national news, “and you’d have read it in California that they had an officer-involved shooting of a black man.”

The videos showed what appeared to be a largely black crowd.

Riley said he didn’t want to harm the business badly and he said his wife had attended a Brett Michaels concert at the Back Bar in 2013.

“You guys bring some pretty cool talent to this town,” Riley said. “You bring cool things to Janesville. It helps, you know, and if you bring the bad things to Janesville, and it runs businesses out of here. It runs households out. It runs everything down. … And if you’re bringing that type of crowd in, with drugs, guns and alcohol, it’s just not a good combination.”

Kerman said he is making changes to make sure this doesn’t happen again. Badertscher said he believed him but that there has to be a penalty.

“I don’t want to bankrupt you. I just want a message sent that this will not be tolerated,” Badertscher said. “I think you are good people, I really do, but you really dropped the ball this night, and you put our community in danger, and that’s not OK.

“It’s crazy, and just watching this, I got the feeling we got lucky,” Badertscher continued. “No pun intended, we dodged a bullet.”

Paola Delgado never got along with her mom, and her dad struggled with alcohol problems.

The Beloit high school senior has been homeless since the seventh grade, often living in a car or sleeping on friends’ couches. Now a client of the county’s 16:49 program to help homeless teens, she persevered and will graduate from high school early this year.

The task force will use those priorities as a guide as it applies for grants, which will be used by the various nonprofits that make up the group. Nonprofit employees, community leaders, volunteers, homeless people and elected officials helped choose the priorities.

Marc Perry of Community Action, who emceed Friday’s annual meeting, said it was an important starting point as the organizations look for resources.

“We want to hear from community members and stakeholders what services, as housing and homeless-serving organizations, we should be focusing on,” he said. “We want to know if there’s anything we’re missing or any gaps in services.

“We want to make sure we’re spending our resources wisely and most effectively in the areas of most need for the community.”

Jessica Locher, assistant director of ECHO and a task force member, said she wasn’t surprised that emergency housing and mental health rose to the top of the list. She said rent assistance also has become a big issue because of the lack of quality affordable housing.

“I think having people from all different parts of the spectrum of homeless services and low-income services … it’s just a good thing to have a wide variety of ideas and perspectives,” she said.

“We’re hearing from people providing the service, people receiving the service and the people supporting the service,” he said. “It’s a pretty well-rounded mix of people, so when we come to a consensus of the three, those are the true priorities of the community.”

Leslie Ackley was living in Elkhorn before she became homeless a few months ago. She said helping the homeless is important.

Ackley has been staying at Twin Oaks Shelter and is moving in with her niece in February. While she has a place to go, she worries about other homeless Rock County residents.

“They need help,” Ackley said. “When you go to the shelter, you connect with other people there, and when you leave you wonder what happens to them. You wonder, ‘Are they going to find housing?’”

The group will do the best it can to effect change in those focus areas with grants and other help, said Tammy DeGarmo, task force chairwoman and executive director at Project 16:49.

“It’s a social community issue,” she said. “It’s not something that just affects a few people. It affects everyone in a community when you have people that are suffering.” 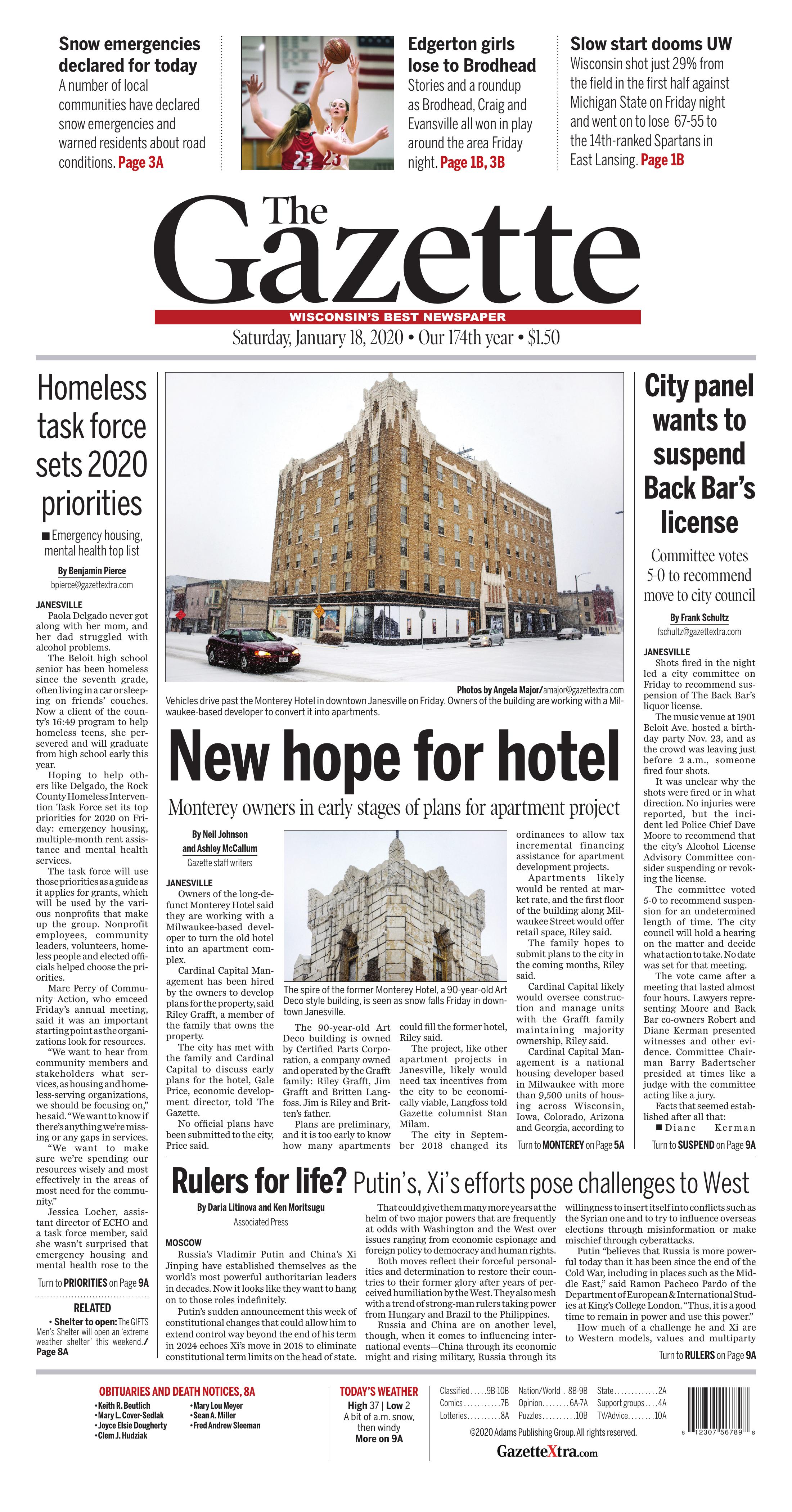