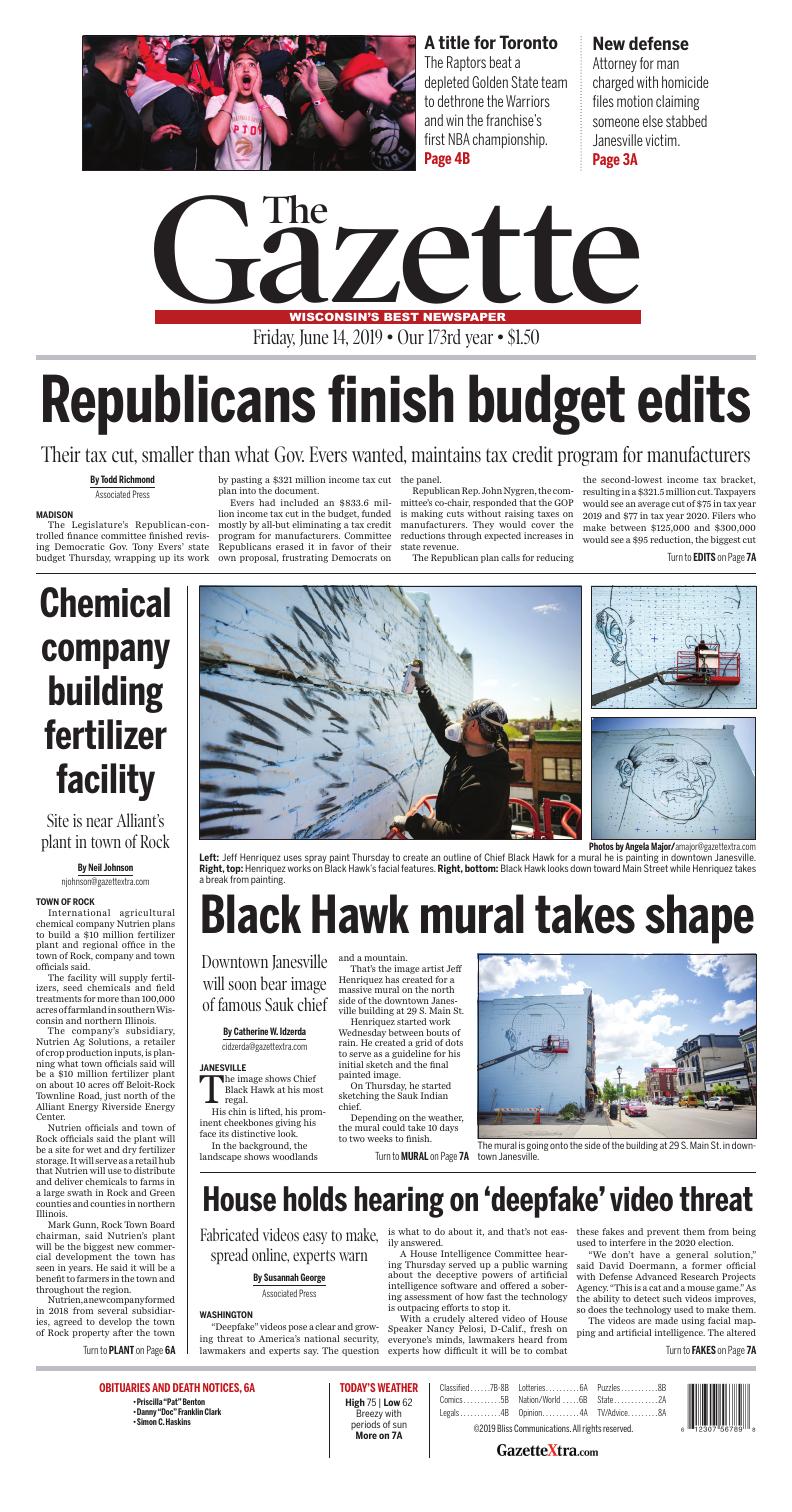 The outline of Black Hawk’s eyes peer over downtown Janesville on Thursday, June 13, 2019. Jeff Henriquez is using spray paint to create the mural.

Artist Jeff Henriquez begins to create a mountainscape behind the already outlined Black Hawk on his first day of working on his mural in downtown Janesville on Thursday.

The image shows Chief Black Hawk at his most regal.

His chin is lifted, his prominent cheekbones giving his face its distinctive look.

In the background, the landscape shows woodlands and a mountain.

That’s the image artist Jeff Henriquez has created for a massive mural on the north side of the downtown Janesville building at 29 S. Main St.

Henriquez started work Wednesday between bouts of rain. He created a grid of dots to serve as a guideline for his initial sketch and the final painted image.

On Thursday, he started sketching the Sauk Indian chief.

Depending on the weather, the mural could take 10 days to two weeks to finish.

Everything will be done in spray paint. 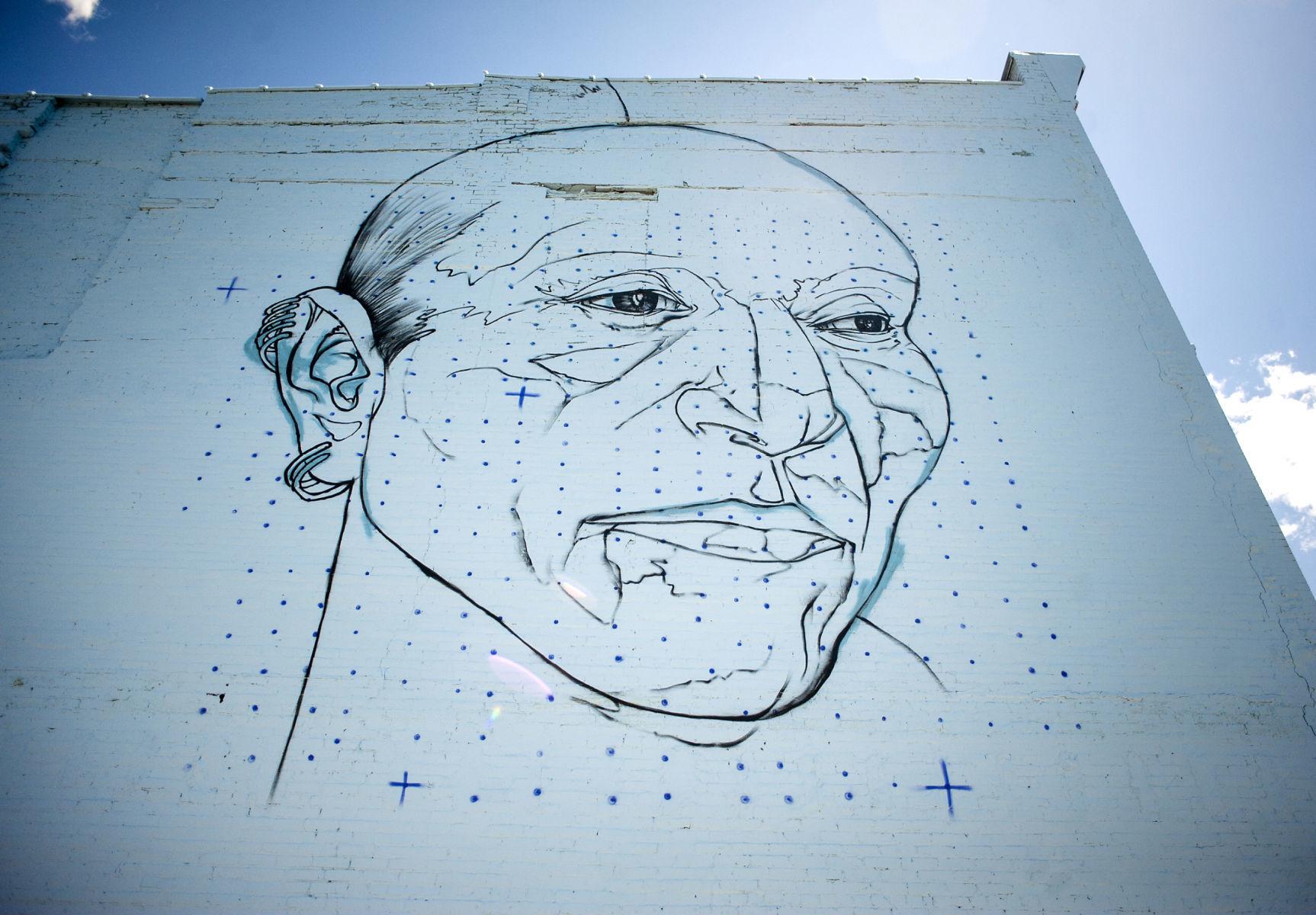 A portion of the mural outline is completed Thursday, June 13, 2019, in downtown Janesville.

Henriquez’s previous work shows the exquisite details and emotional impact that can be achieved with spray paint, even on an uneven canvas of bricks. 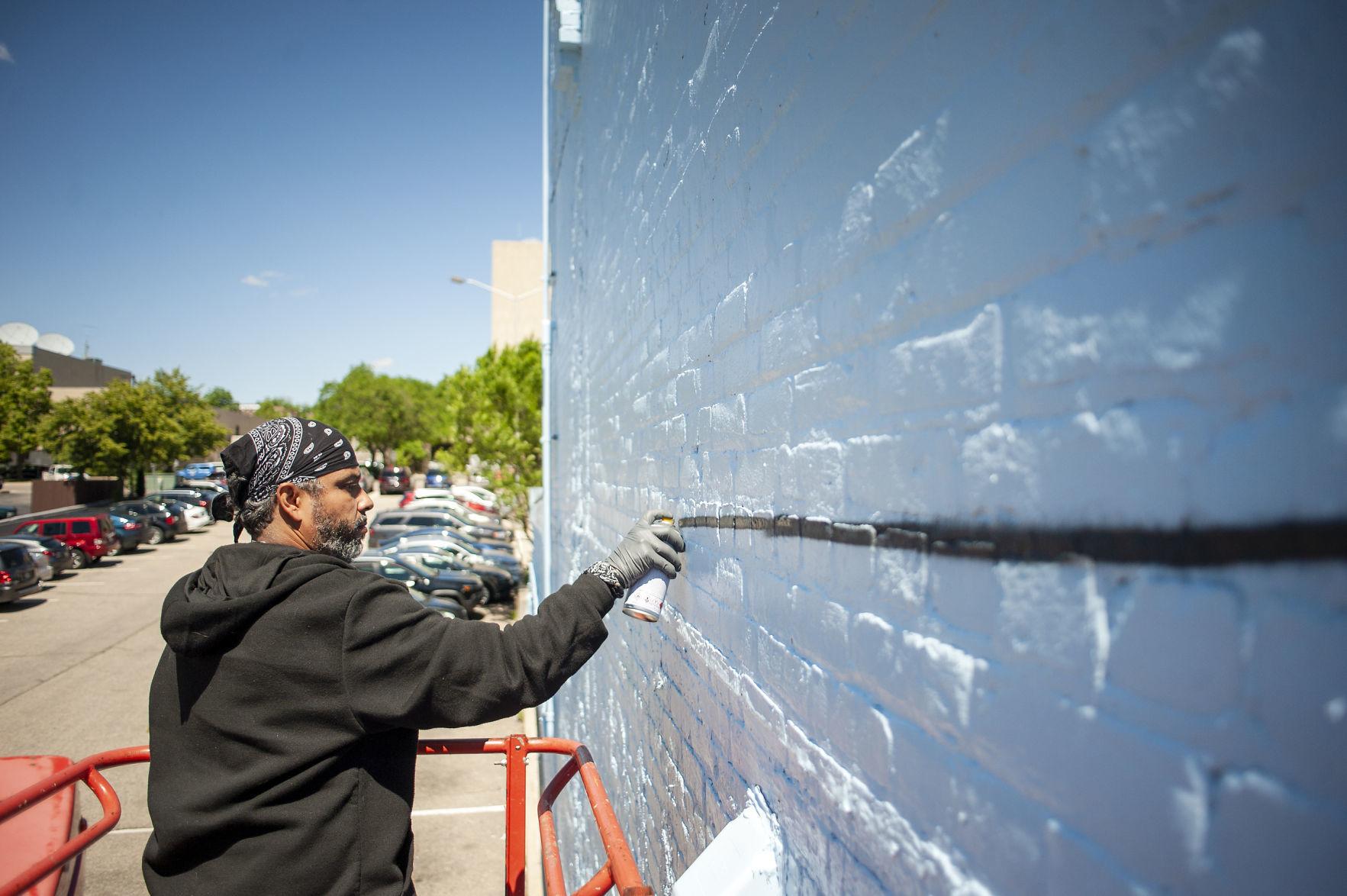 A can of spray paint has a surprising amount of range.

In the end, the Carnegie Hall advice still applies.

“It’s all just practice,” Henriquez said. “You gotta screw things up a lot and then be like, ‘OK, this is not how things are done,’ and then you have to try something else.”

Henriquez, who lives in Newark, New Jersey, has spent a significant amount of time in the Brooklyn borough of New York City, where people can find his artwork livening up stale walls and energizing street corners. 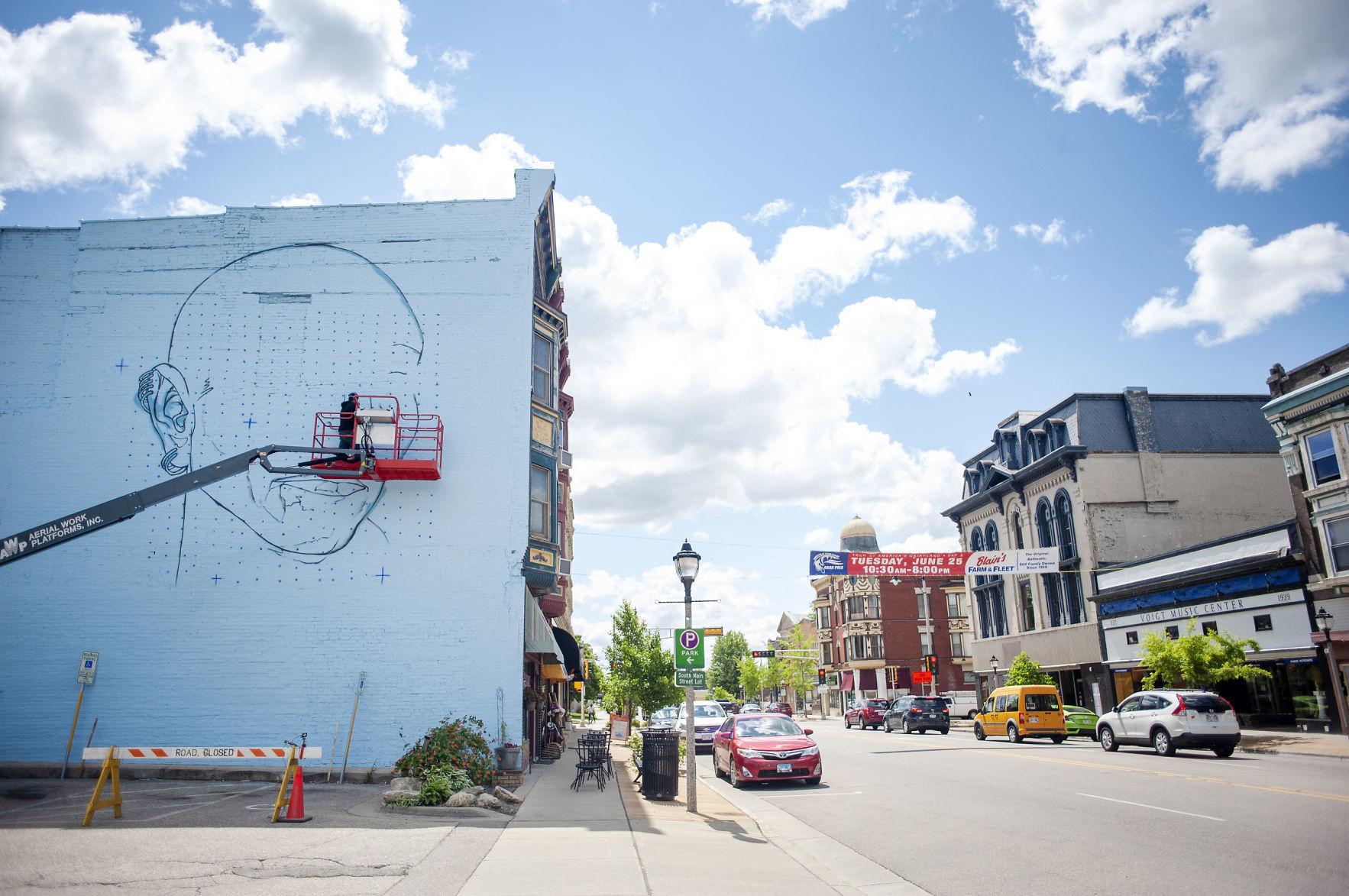 Jeff Henriquez uses a lift to paint a mural of Black Hawk on Thursday, June 13, 2019, along Main Street in downtown Janesville.

This is his first time in the Midwest—outside Chicago, that is. It’s also one of the largest projects Henriquez has created on his own. He has done some commercial jobs on the sides of buildings, but he was always accompanied by other artists.

Even as he was getting started Wednesday, he drew small crowds. When he begins to paint, those numbers are expected to increase.

“That’s all right,” he said. “It’s all about the public. We’re here to bring some vibrancy, some happiness here.”

His work is being supported by Janesville resident Nigella Ryan and the owners of the building, George and Karen Collas.

Ryan first saw Henriquez’s work during a visit to Salem, Massachusetts. There, a development council hired a number of artists to create massive outdoor murals for a neighborhood revitalization project. 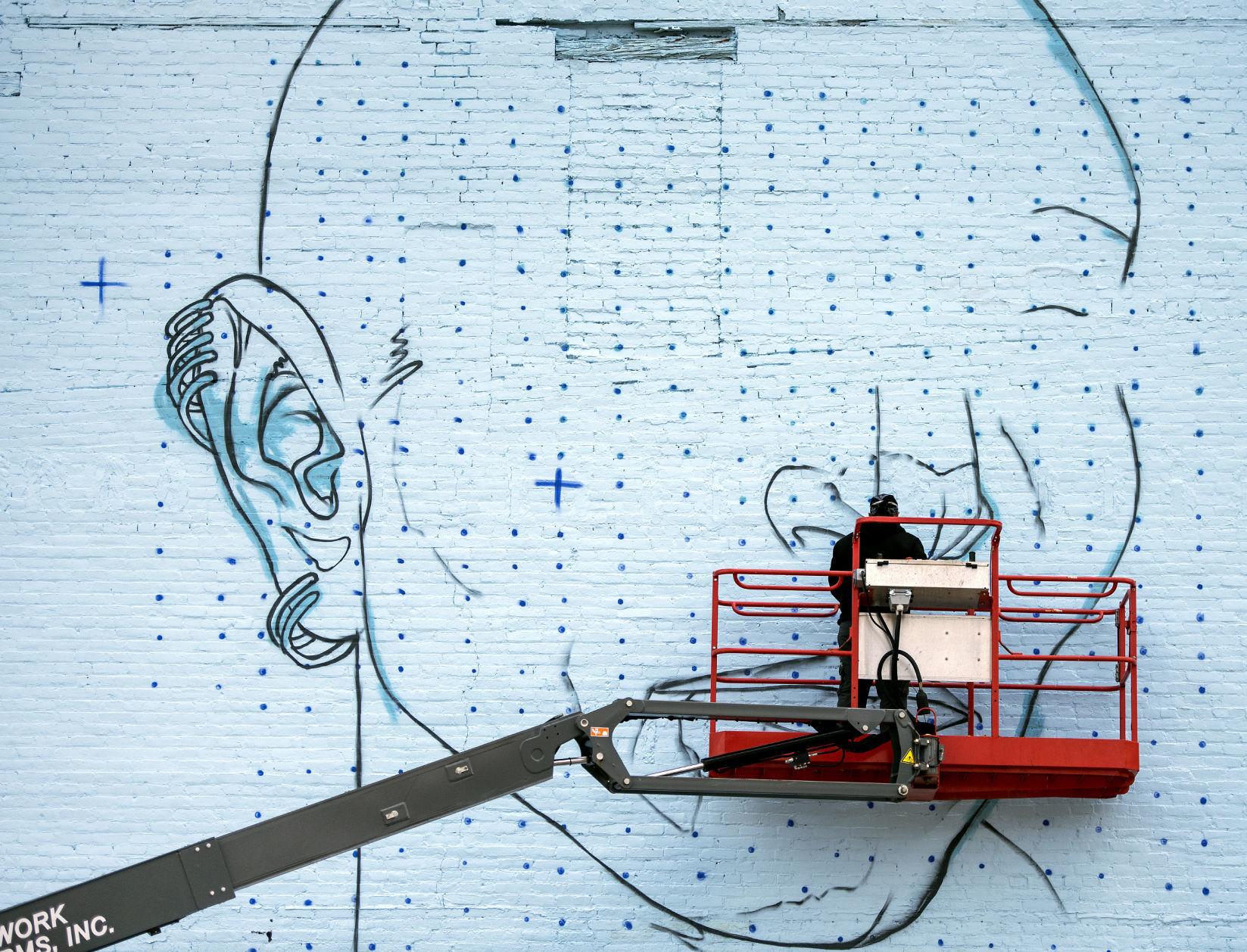 Jeff Henriquez uses a lift to paint the outline of Chief Blackhawk on Thursday, June 13, 2019, in Janesville.

In an interview Wednesday, Jeff Henriquez talked about what drives his art and the challenges of becoming a full-time artist.

"And that whole time, you struggle, you take your lumps, and you just figure it out.  You make all the mistakes. You screw everything up you can get your hands on, and then you figure, 'OK, not that way. It's this way.' So you work your way through it...

"But you have to have the fire in your belly. You gotta have the desire. There was a point in time where I was homeless; I didn't have a place to live, when I was eating whatever with money I made selling little bits of anything ... trying to wait a table here and there. I was a terrible waiter. I had one waiter job where I was fired the same day.

"And you just keep doing the work. It's not a matter of do you want to—sometimes it's like a job—but at the end of the day, this is what it's all about."

Construction workers use a crane to unload a truck at the future site of Nutrien Ag Solutions on Thursday in the town of Rock.

The facility will supply fertilizers, seed chemicals and field treatments for more than 100,000 acres of farmland in southern Wisconsin and northern Illinois.

A rendering of the $10 million fertilizer plant agricultural chemical company Nutrien plans to build in the town of Rock.

The company’s subsidiary, Nutrien Ag Solutions, a retailer of crop production inputs, is planning what town officials said will be a $10 million fertilizer plant on about 10 acres off Beloit-Rock Townline Road, just north of the Alliant Energy Riverside Energy Center.

Nutrien officials and town of Rock officials said the plant will be a site for wet and dry fertilizer storage. It will serve as a retail hub that Nutrien will use to distribute and deliver chemicals to farms in a large swath in Rock and Green counties and counties in northern Illinois. 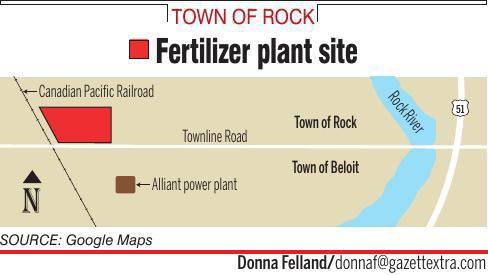 Mark Gunn, Rock Town Board chairman, said Nutrien’s plant will be the biggest new commercial development the town has seen in years. He said it will be a benefit to farmers in the town and throughout the region.

Nutrien, a new company formed in 2018 from several subsidiaries, agreed to develop the town of Rock property after the town earlier this year approved a conditional-use permit for landowner Arthur Donaldson.

Under Nutrien’s former name, Agrium, subsidiaries Crop Production Services and Loveland have been operating for several years at an aging manufacturing site at 1903 Beloit Ave. on Janesville’s south side.

It would be a significant expansion for the company locally and one that would make Nutrien’s future town of Rock site a regional center of retail distribution and corporate operations, Abbe said.

“We’ve grown so fast out of Janesville the last three years. We knew we’d been outgrowing the facility. As far as capacity and size, the new facility is about four times the size” of the Janesville site, Abbe said. 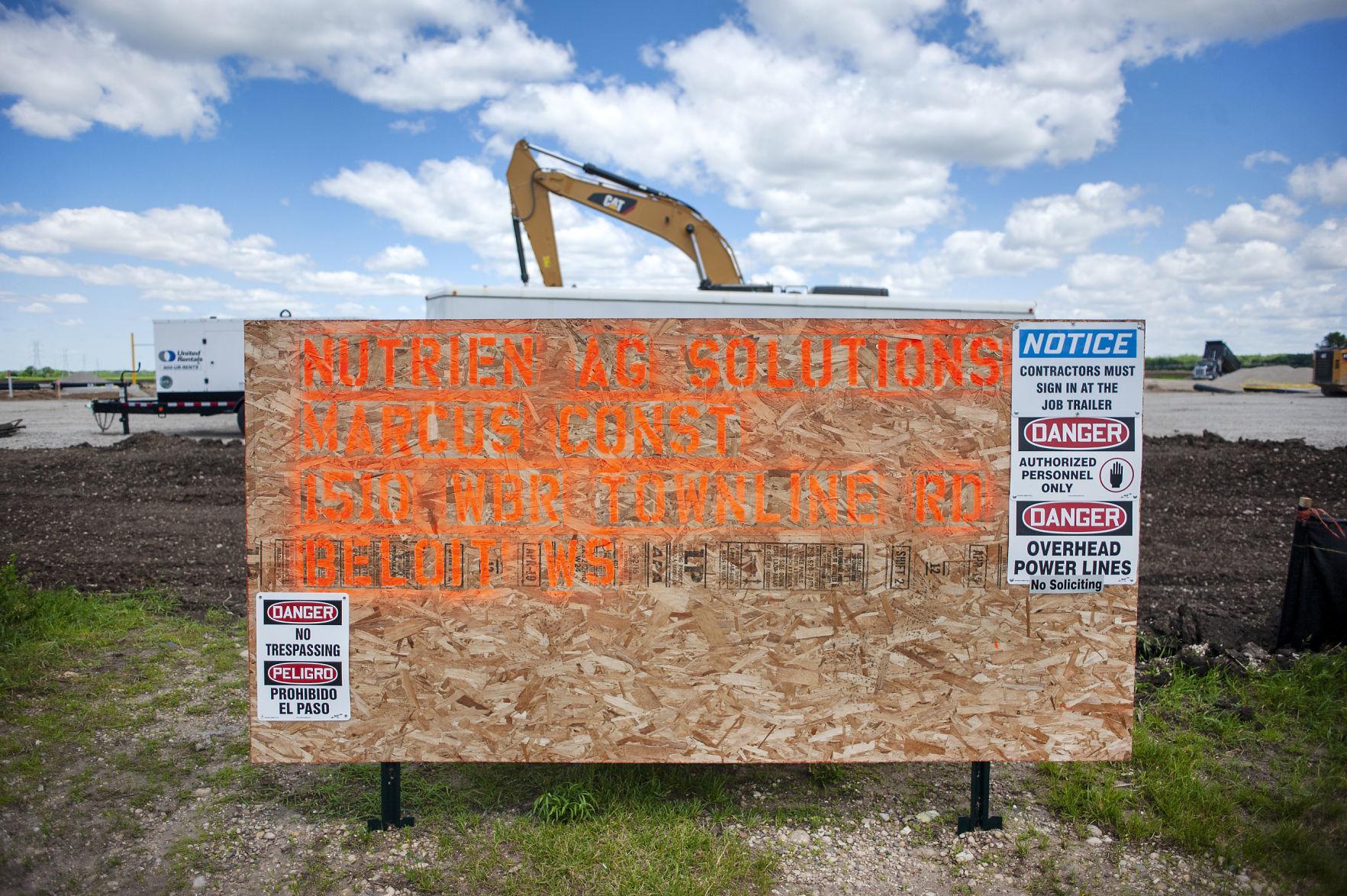 A sign at the construction site at the future location of Nutrien Ag Solutions on Thursday in the town of Rock.

The plant will be built with new electronic automation, Abbe said, and all of the storage would be indoors—an “environmentally-safe” configuration that allows operations without using a major water capture system.

“That’s a really big outfit. This is going to be kind of like a flagship operation here. Everything will be state of the art,” Abbe said. “This is going to be something pretty special. I don’t know of any facilities that are this current and this updated.”

Abbe figures that between Nutrien’s regional corporate offices and the plant itself, the town of Rock site could employ 50 to 60 people during the busy seasons.

The plant is on land that’s west of the Rock River, an area of the town that’s not tied to an intergovernmental agreement the town of Rock holds with the city of Janesville.

Gunn said that means Janesville cannot annex land that encompasses the Nutrien site. That ensures property tax revenue generated from the plant will remain in the town of Rock. 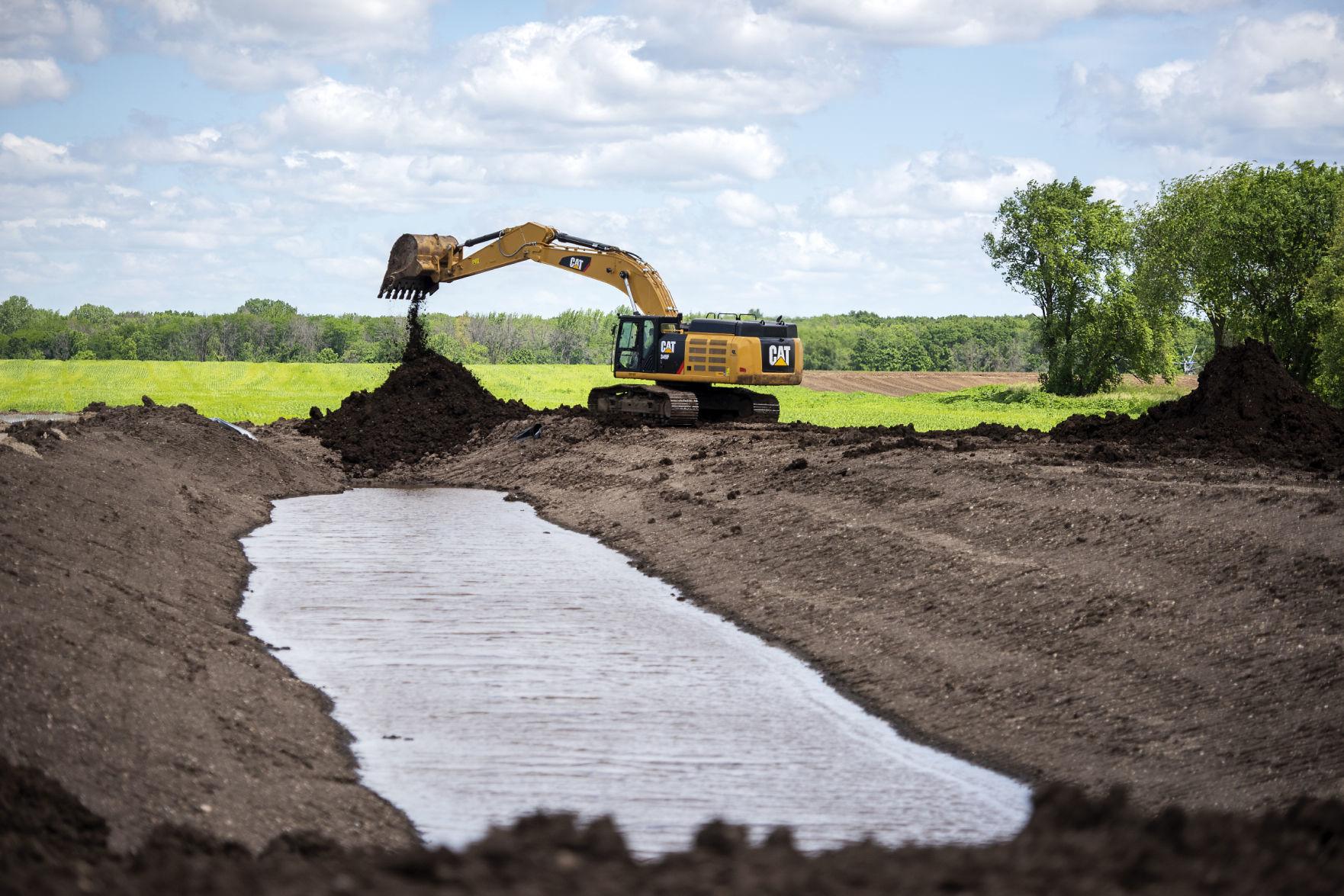 A worker uses an excavator Thursday at the future site of a Nutrien Ag Solutions fertilizer plant in the town of Rock. 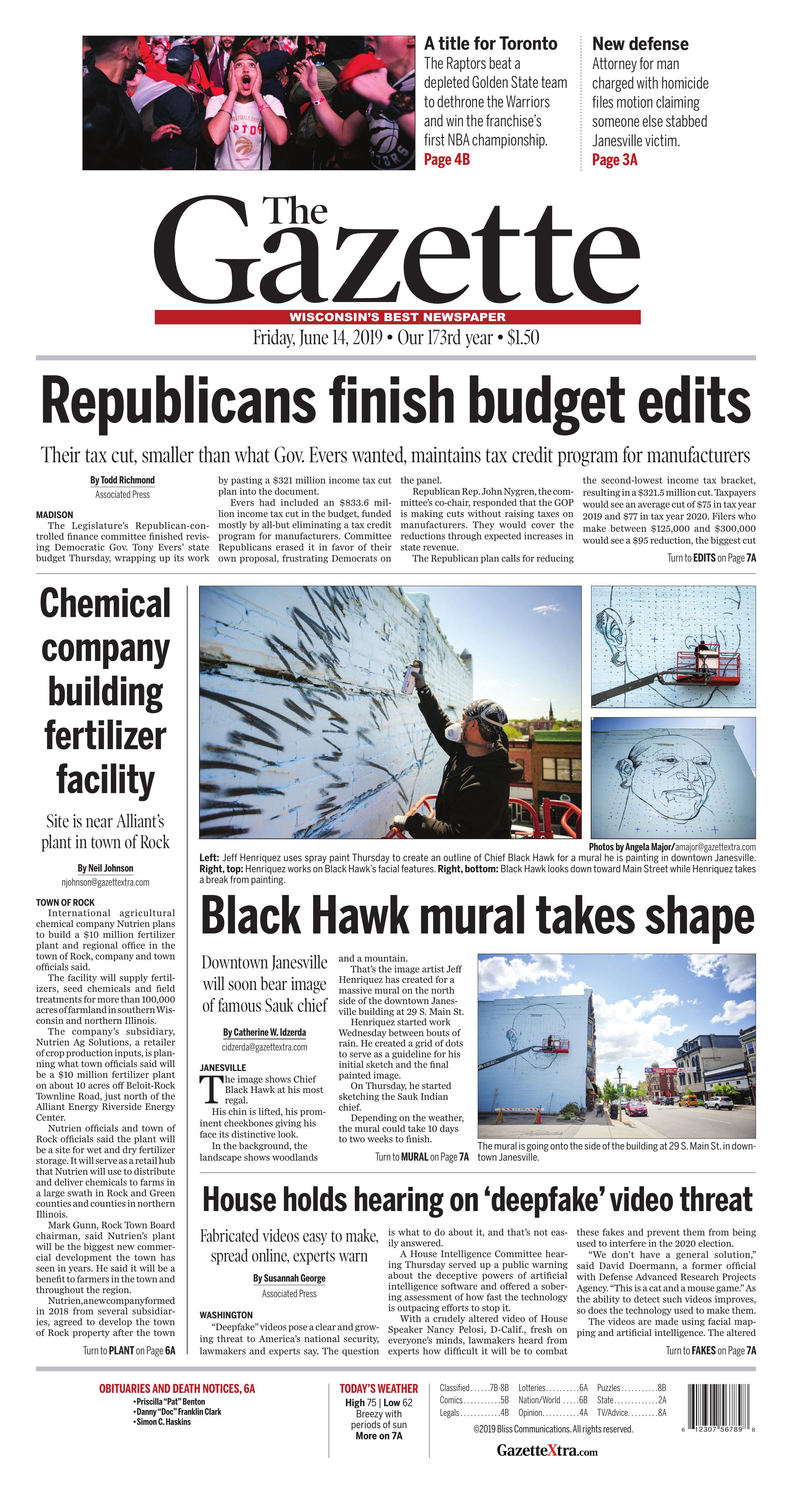