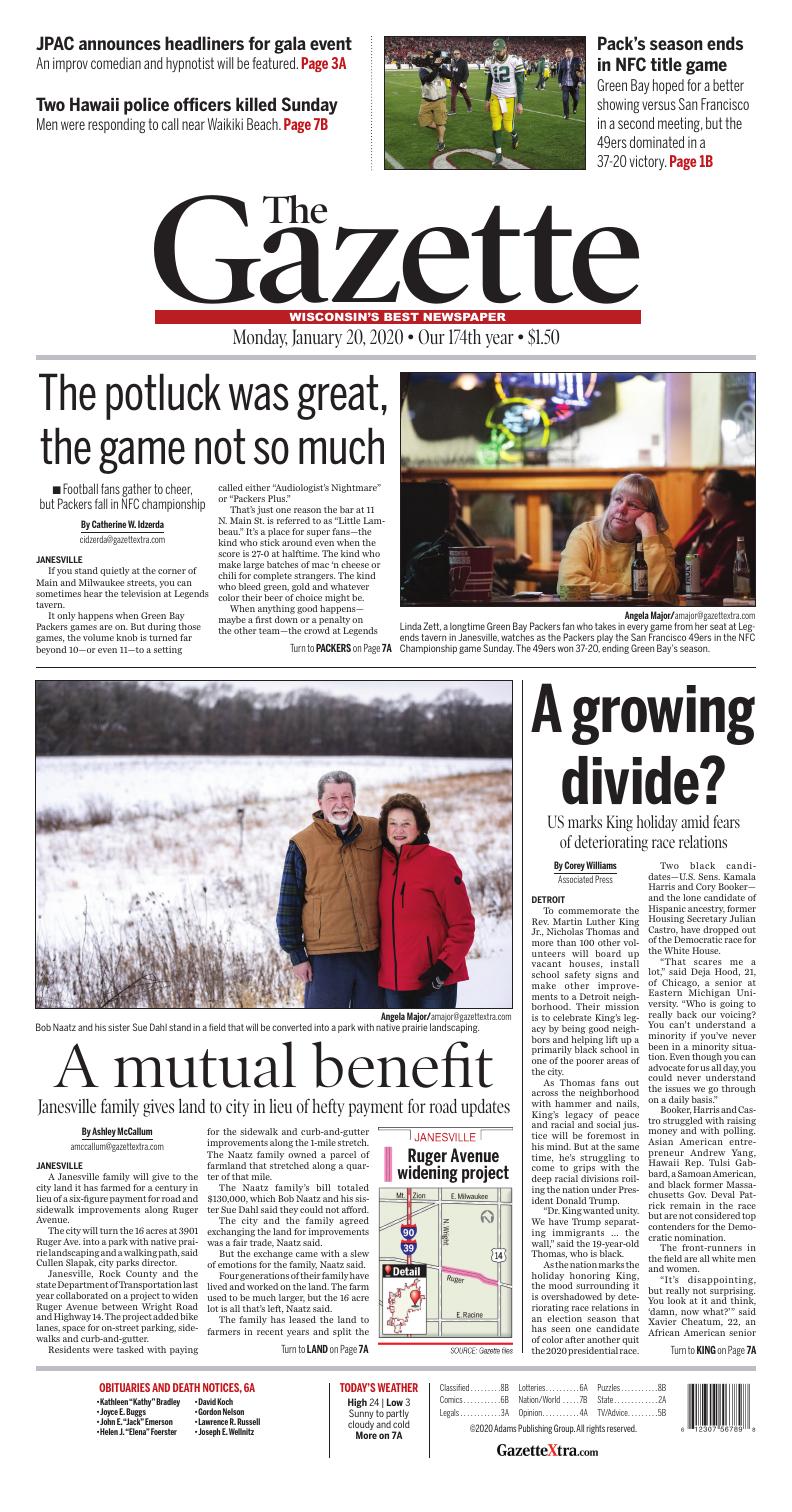 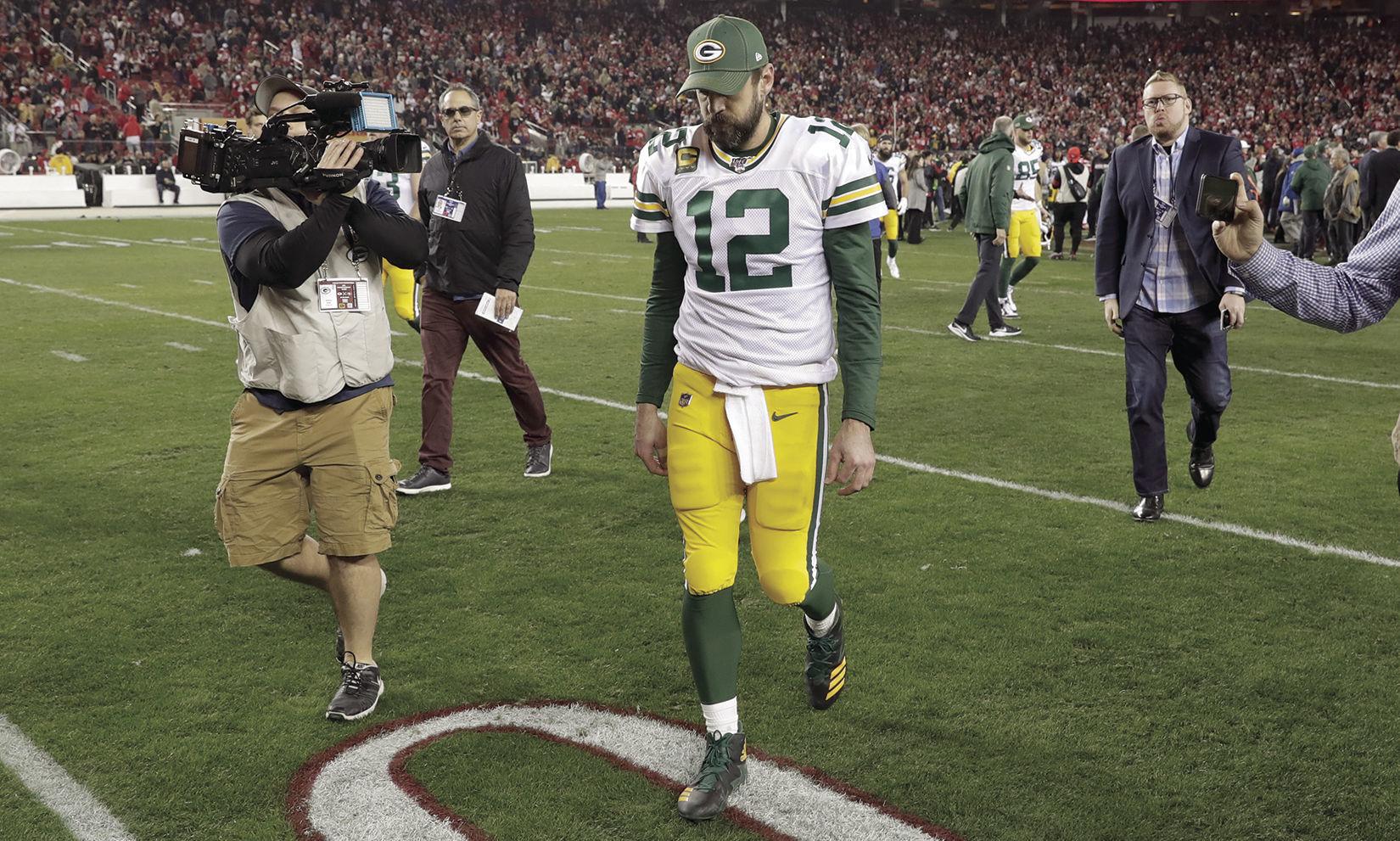 Scott Ludois, left, watches at Legends in Janesville as Packers tight end Jimmy Graham reaches the 1-yard line Sunday during Sunday's NFC Championship game against the San Francisco 49ers. The play was initially ruled a touchdown, but the call was reversed.

Linda Zett, a longtime Green Bay Packers fan who takes in every game from her seat at Legends tavern in Janesville, watches as the Packers play the San Francisco 49ers on Sunday.

If you stand quietly at the corner of Main and Milwaukee streets, you can sometimes hear the television at Legends tavern.

It only happens when Green Bay Packers games are on. But during those games, the volume knob is turned far beyond 10—or even 11—to a setting called either “Audiologist’s Nightmare” or “Packers Plus.”

That’s just one reason the bar at 11 N. Main St. is referred to as “Little Lambeau.” It’s a place for super fans—the kind who stick around even when the score is 27-0 at halftime. The kind who make large batches of mac ‘n cheese or chili for complete strangers. The kind who bleed green, gold and whatever color their beer of choice might be. 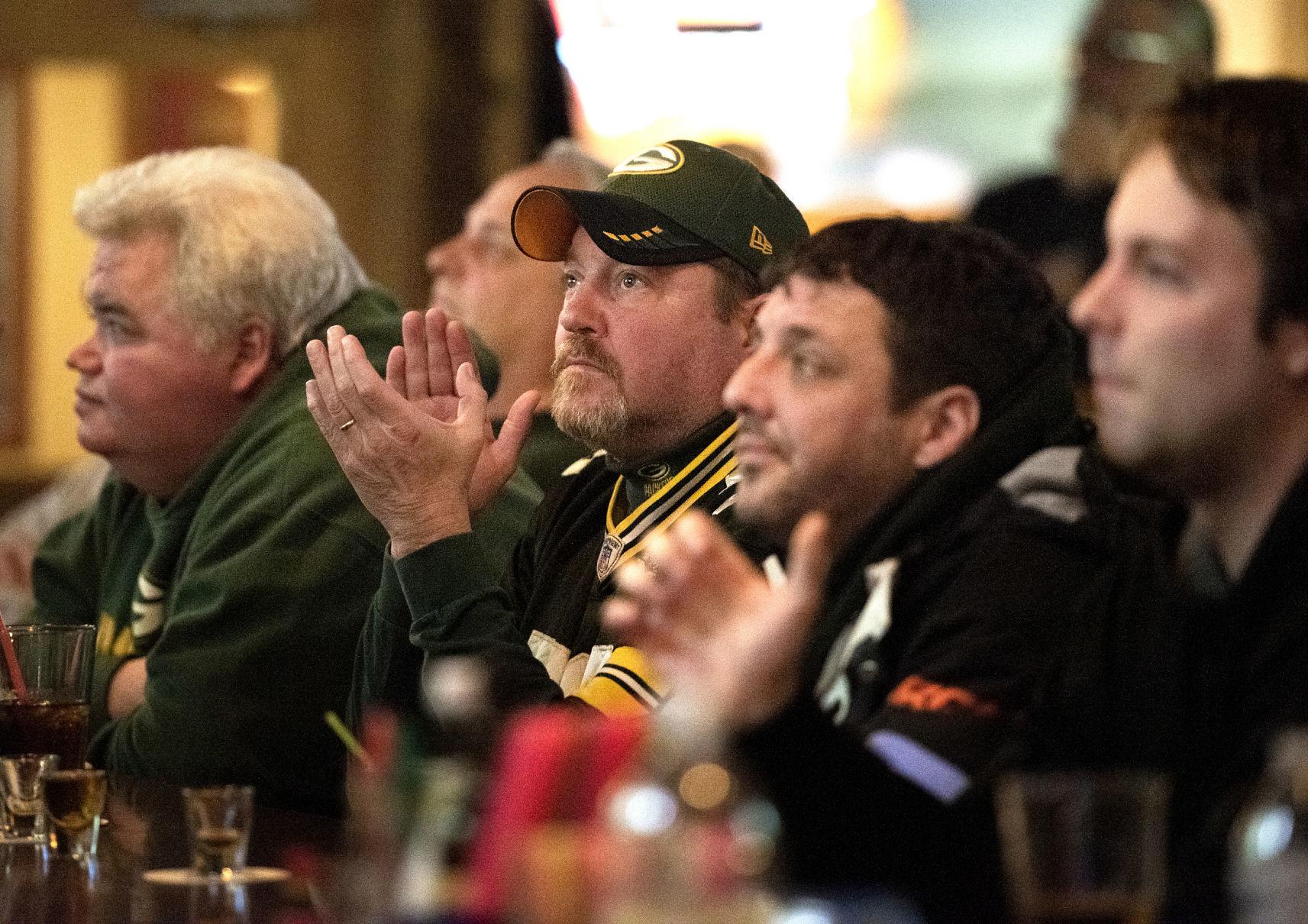 When anything good happens—maybe a first down or a penalty on the other team—the crowd at Legends erupts into applause and hoots. A touchdown results in an explosion of whoops and shouts.

“Sure, people have been in better moods, but it’s always like this,” bar owner Tim “Milly” Millis said Sunday night. “It’s the Packers.”

On Sunday night, as the Packers lost 37-20 to the San Francisco 49ers in the NFC Championship game, there wasn’t much to be happy about except for the mac ‘n cheese and the company of friends. By the end of the second quarter, there were a lot of crossed arms and heavy sighs. People stuck around, but their hearts were heavy.

The third quarter got off to a good start, but the Packers couldn’t stop the 49ers’ running game. Even a 65-yard reception by Packers wide receiver Davante Adams wasn’t enough to lift the mood.

The one person in the bar who was truly happy was the guy in the red shirt—a red 49ers shirt. 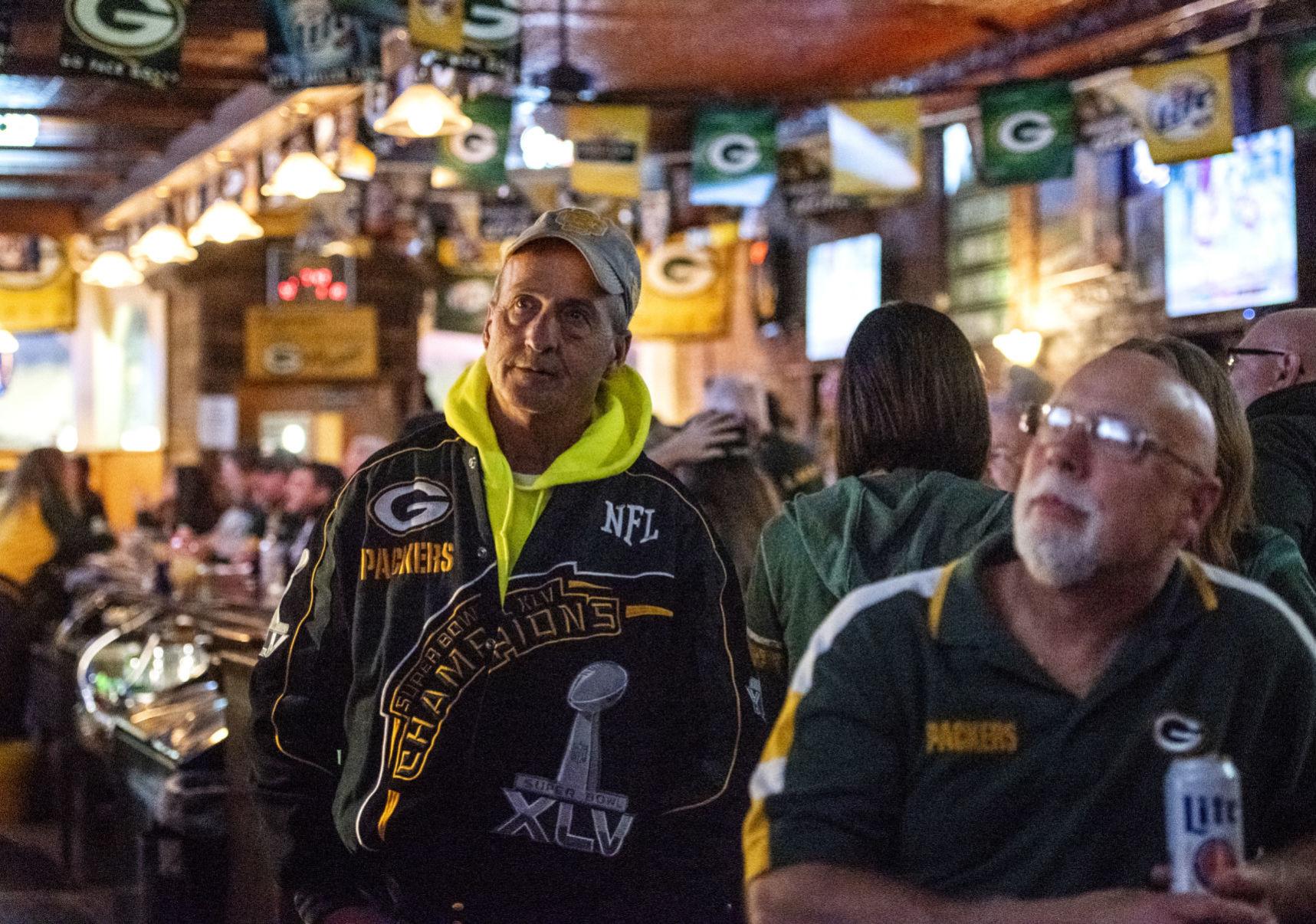 Mike Chareunphasouk of Janesville has been a 49s fan since he was young. No, he didn’t have the misfortune of growing up in California. He has spent most of his life here, but his father was a 49ers fan.

Chareunphasouk’s friends all were dressed in green and gold. They acknowledged that, despite his taste in football teams, they still loved him.

Somebody got up for a beer. Someone else got up for another trip to the potluck. The Packers converted a first down, and the bar erupted into whooping—with the notable exception of Chareunphasouk.

So, why come to “Little Lambeau” when you’re the odd man out?

Bob Naatz and his sister Sue Dahl stand in a field that will be converted into a park with native prairie landscaping.

A Janesville family will give to the city land it has farmed for a century in lieu of a six-figure payment for road and sidewalk improvements along Ruger Avenue.

The city will turn the 16 acres at 3901 Ruger Ave. into a park with native prairie landscaping and a walking path, said Cullen Slapak, city parks director.

Janesville, Rock County and the state Department of Transportation last year collaborated on a project to widen Ruger Avenue between Wright Road and Highway 14. The project added bike lanes, space for on-street parking, sidewalks and curb-and-gutter. 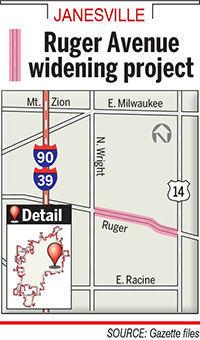 Residents were tasked with paying for the sidewalk and curb-and-gutter improvements along the 1-mile stretch. The Naatz family owned a parcel of farmland that stretched along a quarter of that mile.

The Naatz family’s bill totaled $130,000, which Bob Naatz and his sister Sue Dahl said they could not afford.

The city and the family agreed exchanging the land for improvements was a fair trade, Naatz said.

But the exchange came with a slew of emotions for the family, Naatz said.

The Naatz family still farms on Ruger Avenue in Janesville. But a plan to widen the road and install sidewalks along their large property could cost them tens of thousands of dollars.

Four generations of their family have lived and worked on the land. The farm used to be much larger, but the 16 acre lot is all that’s left, Naatz said.

The family has leased the land to farmers in recent years and split the profits. It would have taken about 170 years for the profits to pay off the road improvements, Naatz said.

The family could not sell the land because it is in a flood plain and cannot be developed, Naatz said.

“We hated to part with it (the land) but we can’t afford to keep it,” Dahl said. “(We were) kinda put in a position where we didn’t have a choice, but I think it is good for the city to have that property.”

Naatz will continue living on a 5-acre farmstead adjacent to the soon-to-be parkland. He has made the payments for the improvements along his home property, he said. 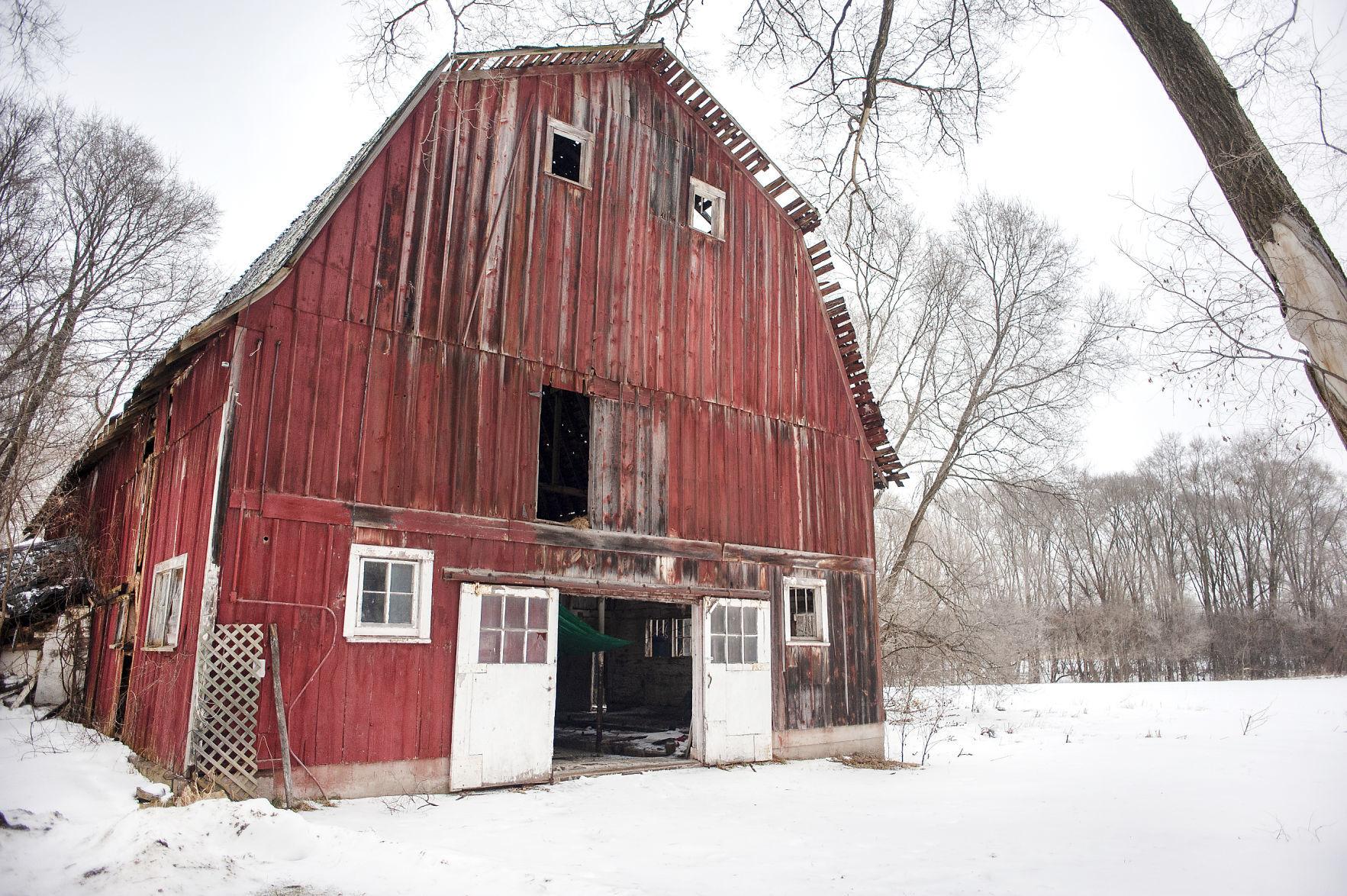 Improvements to Ruger Avenue are “beautiful” and were beneficial to most of the people living in the area, Naatz said.

The agreement between the city and the family mandates the land be used as a park forever. If the city at some point wants to sell it, the family must have first choice to buy it, Naatz said.

The family was given the opportunity to name the park and chose to name it after their grandparents, whose last name was Schneider, Naatz said.

The transfer of land is complete, meaning the city officially owns it, Slapak said.

It will take about five years for the land to become a full native prairie because native plants take time to grow, Slapak said.

The city likely will begin with planting tall grasses, then move on to flowers such as purple cone flower and black-eyed Susan, Slapak said.

Slapak hopes there will be money to install playground equipment by the end of 2022, he said.

Adding parkland to that area was part of the city’s strategic plan. It will blend well with existing city land surrounding the area, Slapak said.