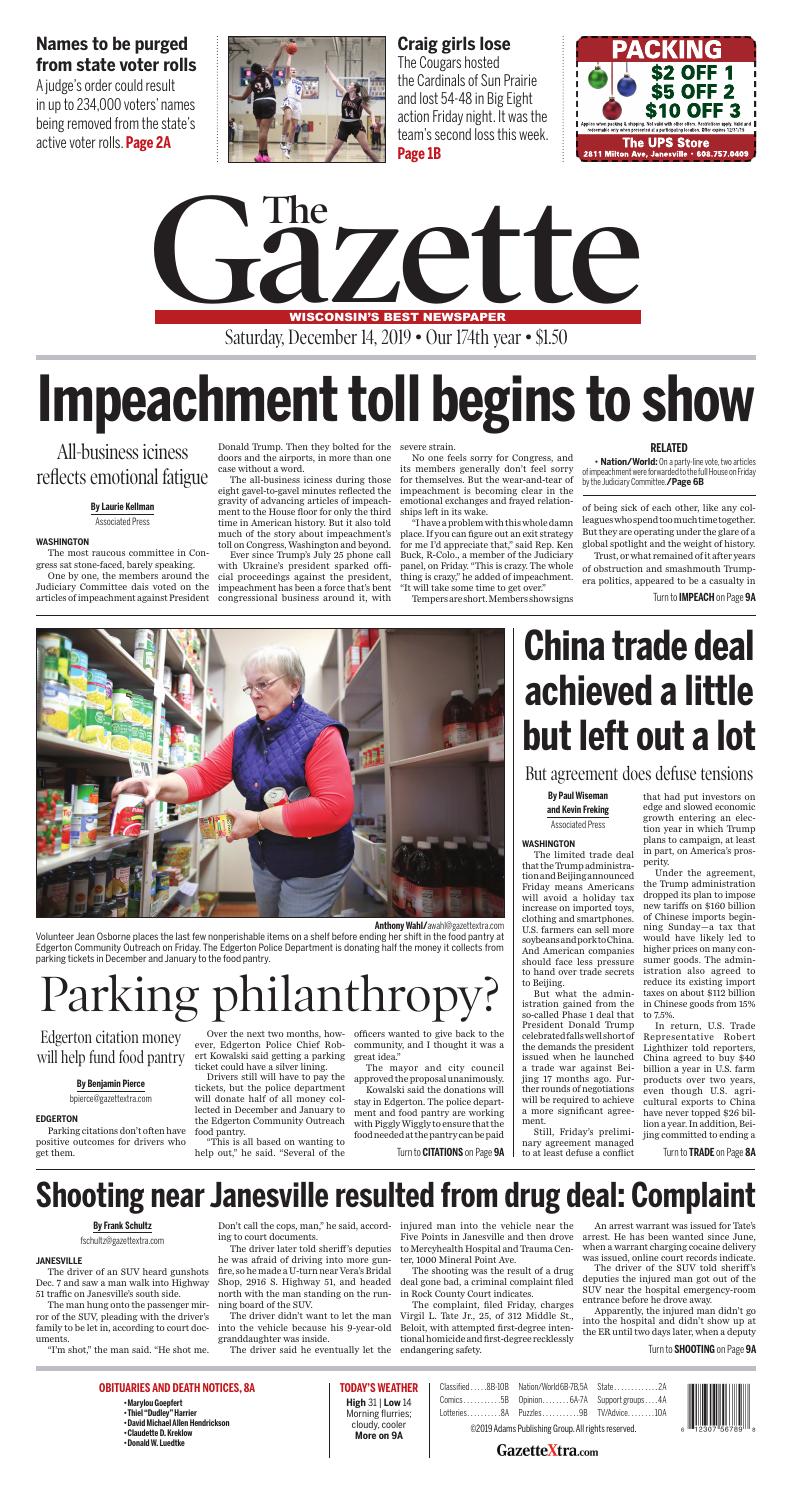 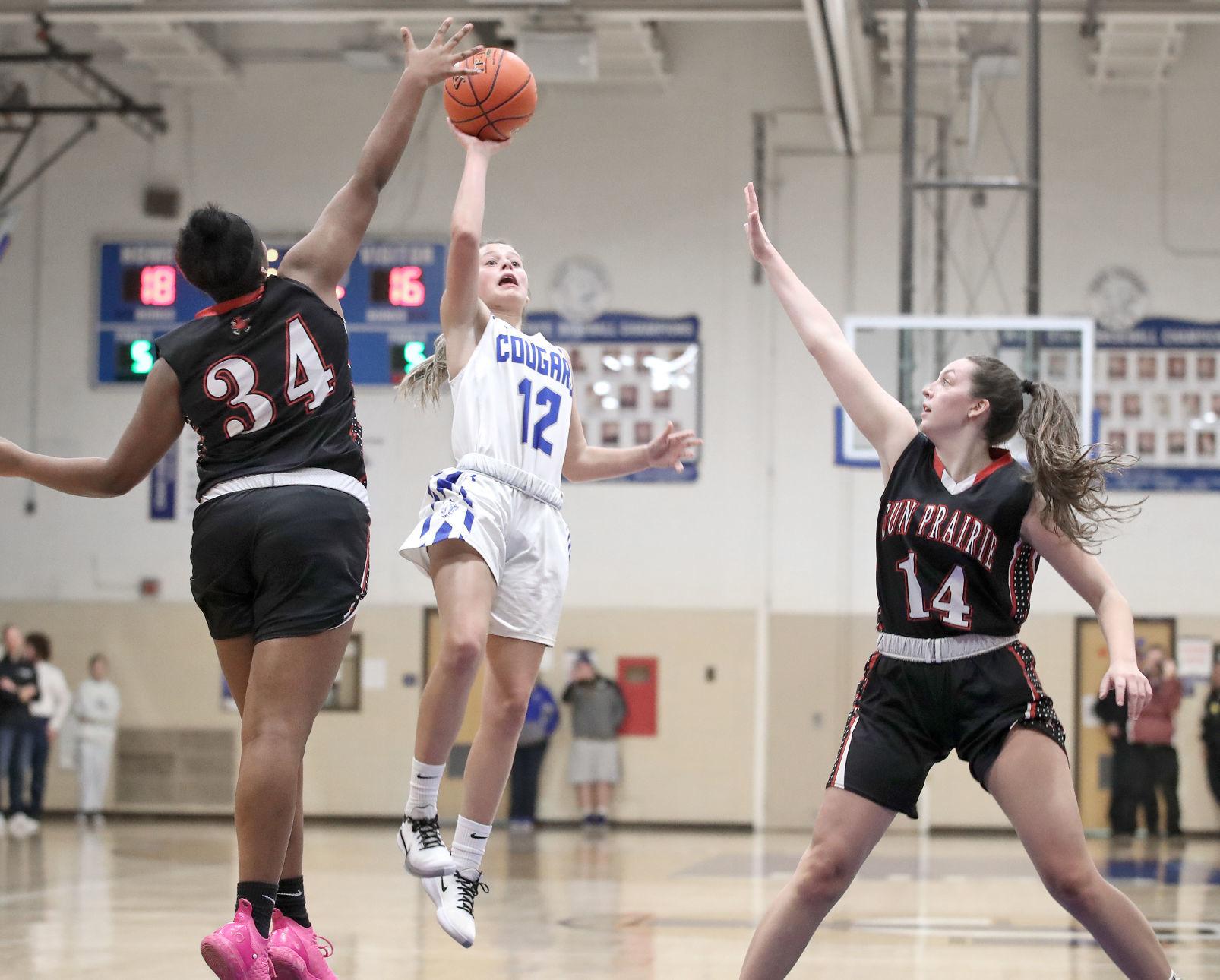 Janesville Craig’s Ellie Magestro-Kennedy takes a running shot during the first half of their home game against Sun Prairie on Friday, Dec. 13. 4

Volunteer Jean Osborne places the last few nonperishable items on a shelf before ending her shift in the food pantry at Edgerton Community Outreach on Friday. The Edgerton Police Department is donating half the money it collects from parking tickets in December and January to the food pantry.

Volunteer Kay Nehls sweeps the floor at the food pantry at Edgerton Community Outreach on Friday. The pantry is getting a donation from the Edgerton Police Department in December and January.

Parking citations don’t often have positive outcomes for drivers who get them.

Over the next two months, however, Edgerton Police Chief Robert Kowalski said getting a parking ticket could have a silver lining.

Drivers still will have to pay the tickets, but the police department will donate half of all money collected in December and January to the Edgerton Community Outreach food pantry.

“This is all based on wanting to help out,” he said. “Several of the officers wanted to give back to the community, and I thought it was a great idea.”

The mayor and city council approved the proposal unanimously.

Kowalski said the donations will stay in Edgerton. The police department and food pantry are working with Piggly Wiggly to ensure that the food needed at the pantry can be paid for with the ticket money.

“Especially now around the holidays, the food pantry is stressed, so by the time we collect our money and give back, it will help replenish some of our food that was given out during the holidays,” Kowalski said.

Sarah Williams, executive director of Edgerton Community Outreach, oversees the food pantry. She said the pantry sees a “tremendous” spike in traffic around the holidays, and the police department donation will go a long way toward restocking the shelves.

“A week after Christmas things are very tight, and families with kids might need extra help if they’re not getting free breakfast or lunch with the school,” Williams said.

“We’re not going to say ‘no’ to a food pantry donation like this.”

She said Kowalski and the officers are the real Santas this year.

“I’m absolutely amazed,” she said. “We’ve had a very good working relationship with the department in the past, but since Chief Kowalski has come to town, he’s been incredibly community-focused. It’s been phenomenal.”

Kowalski hopes to make the same donation every year. He said he’d like to start the collection earlier in November and December next year to ensure the pantry can fully restock after Christmas.

Getting the opportunity to give back is a big motivator for the department, he said.

The driver of an SUV heard gunshots Dec. 7 and saw a man walk into Highway 51 traffic on Janesville’s south side.

The man hung onto the passenger mirror of the SUV, pleading with the driver’s family to be let in, according to court documents.

“I’m shot,” the man said. “He shot me. Don’t call the cops, man,” he said, according to court documents.

The driver later told sheriff’s deputies he was afraid of driving into more gunfire, so he made a U-turn near Vera’s Bridal Shop, 2916 S. Highway 51, and headed north with the man standing on the running board of the SUV.

The driver didn’t want to let the man into the vehicle because his 9-year-old granddaughter was inside.

The driver said he eventually let the injured man into the vehicle near the Five Points in Janesville and then drove to Mercyhealth Hospital and Trauma Center, 1000 Mineral Point Ave.

The shooting was the result of a drug deal gone bad, a criminal complaint filed in Rock County Court indicates.

An arrest warrant was issued for Tate’s arrest. He has been wanted since June, when a warrant charging cocaine delivery was issued, online court records indicate.

The driver of the SUV told sheriff’s deputies the injured man got out of the SUV near the hospital emergency-room entrance before he drove away.

Apparently, the injured man didn’t go into the hospital and didn’t show up at the ER until two days later, when a deputy interviewed him, according to the complaint.

The bullet had passed through the man’s thigh.

The victim told deputies he had set up a drug deal with a man he knew as Cash, from whom he had been buying drugs for about a year, according to the complaint.

Deputies developed suspicion that Cash is Tate, and the victim later picked Tate out of a photo lineup, saying he was “fairly certain” Cash was the man in the photo, according to the complaint.

The deal was $500 for 14 grams of cocaine and one to three grams of heroin. The man met Cash at the Kwik Trip at 3123 S. Highway 51 and prepared to make the deal through a window of Cash’s SUV, according to the complaint.

The victim told deputies he saw the drugs on Cash’s lap, believed Cash was trying to short him, and when Cash handed him the drugs, he ran without paying, the complaint states.

The victim said he ran north, saw Cash chasing him on foot and Cash’s SUV pursuing as well. He was shot somewhere north of the intersection of highways 11 and 51.

Six shell casings were found near the bridal shop, according to the complaint. 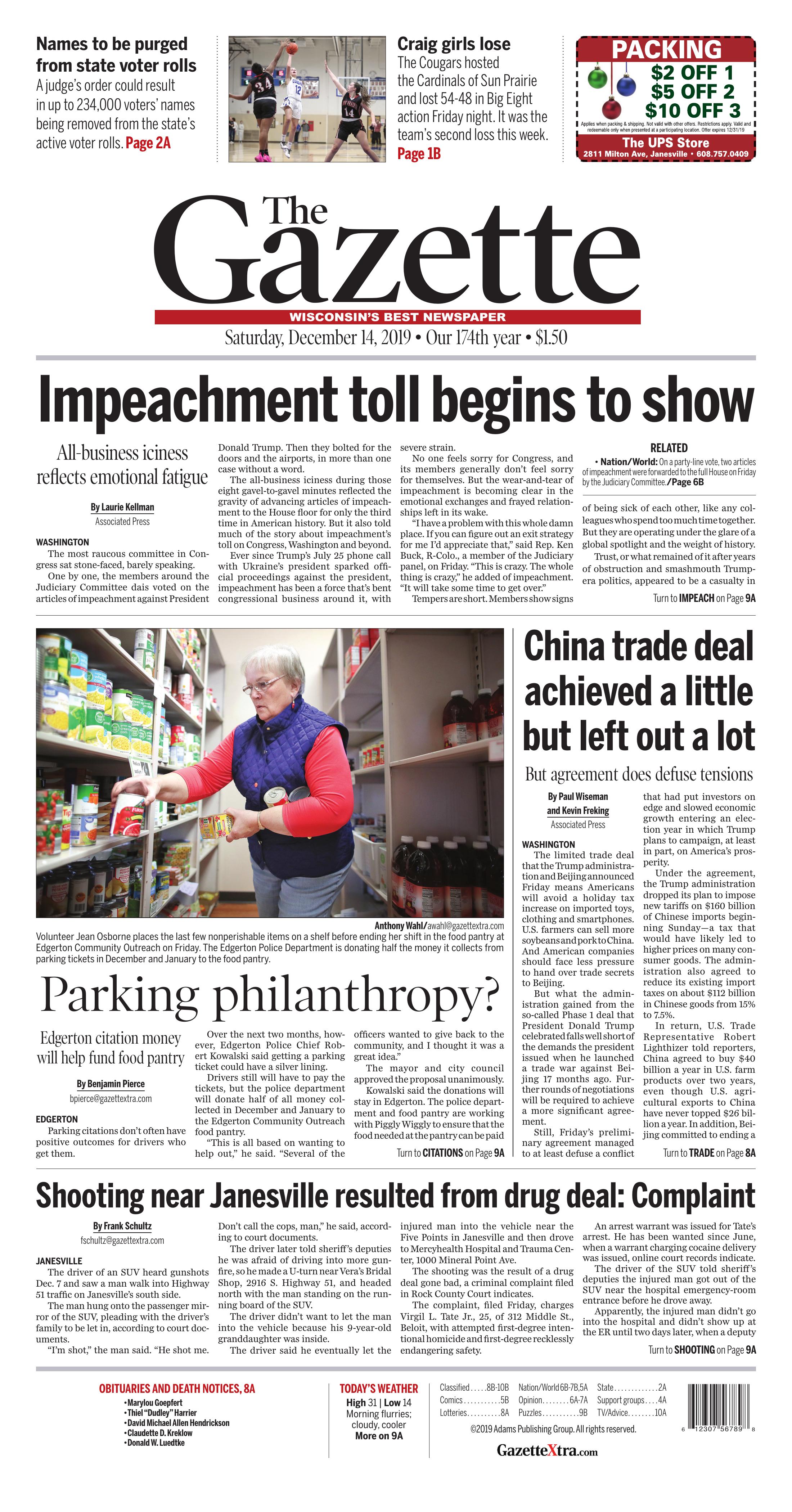