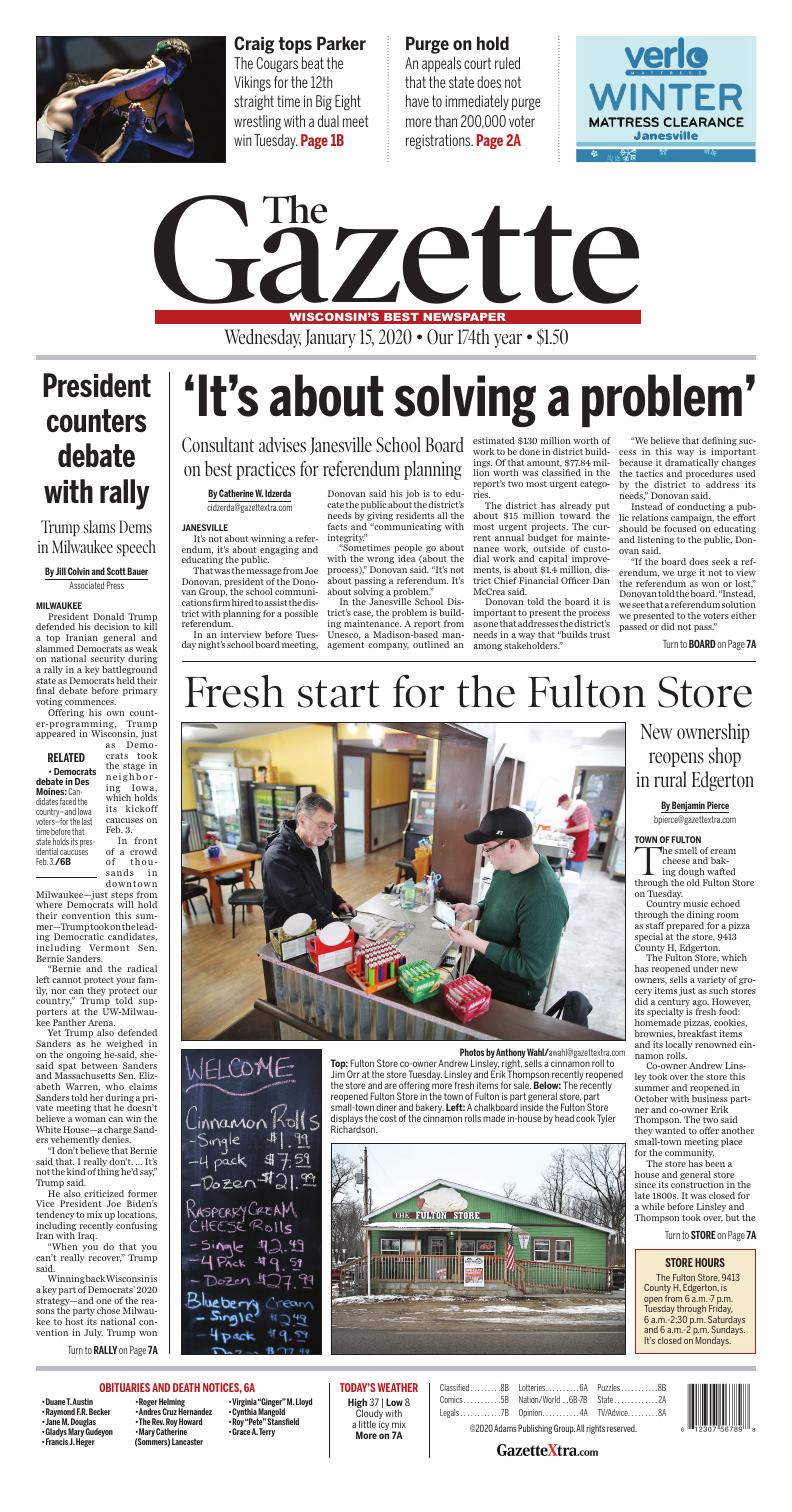 It’s not about winning a referendum, it’s about engaging and educating the public.

That was the message from Joe Donovan, president of the Donovan Group, the school communications firm hired to assist the district with planning for a possible referendum.

In an interview before Tuesday night’s school board meeting, Donovan said his job is to educate the public about the district’s needs by giving residents all the facts and “communicating with integrity.”

“Sometimes people go about with the wrong idea (about the process),” Donovan said. “It’s not about passing a referendum. It’s about solving a problem.”

In the Janesville School District’s case, the problem is building maintenance. A report from Unesco, a Madison-based management company, outlined an estimated $130 million worth of work to be done in district buildings. Of that amount, $77.84 million worth was classified in the report’s two most urgent categories.

The district has already put about $15 million toward the most urgent projects. The current annual budget for maintenance work, outside of custodial work and capital improvements, is about $1.4 million, district Chief Financial Officer Dan McCrea said.

Donovan told the board it is important to present the process as one that addresses the district’s needs in a way that “builds trust among stakeholders.”

“We believe that defining success in this way is important because it dramatically changes the tactics and procedures used by the district to address its needs,” Donovan said.

Instead of conducting a public relations campaign, the effort should be focused on educating and listening to the public, Donovan said.

“If the board does seek a referendum, we urge it not to view the referendum as won or lost,” Donovan told the board. “Instead, we see that a referendum solution we presented to the voters either passed or did not pass.”

Donovan asked board members to identify which groups they wanted to engage during the referendum process. Board members suggested parent-teacher organization and association members, Forward Janesville and other business groups, and service groups.

The board also asked Donovan to prepare answers for questions that it expects residents to ask. Those could include questions about a referendum’s tax impact or about maintenance work the district has already done.

Donovan also reminded the board of do’s and don’ts of the process.

First, he said it is important to overcommunicate and continue to do so throughout the process.

Second, Donovan said board members cannot allow their referendum efforts to evolve into advocacy. While educating the public is the goal, “we must not tell people how to vote and we must not campaign for a specific solution,” he said. Such efforts are not allowed under state law.

Finally, being completely truthful and not hiding information is the only way to build trust among voters, Donovan said.

The smell of cream cheese and baking dough wafted through the old Fulton Store on Tuesday.

Country music echoed through the dining room as staff prepared for a pizza special at the store, 9413 County H, Edgerton.

The Fulton Store, which has reopened under new owners, sells a variety of grocery items just as such stores did a century ago. However, its specialty is fresh food: homemade pizzas, cookies, brownies, breakfast items and its locally renowned cinnamon rolls. 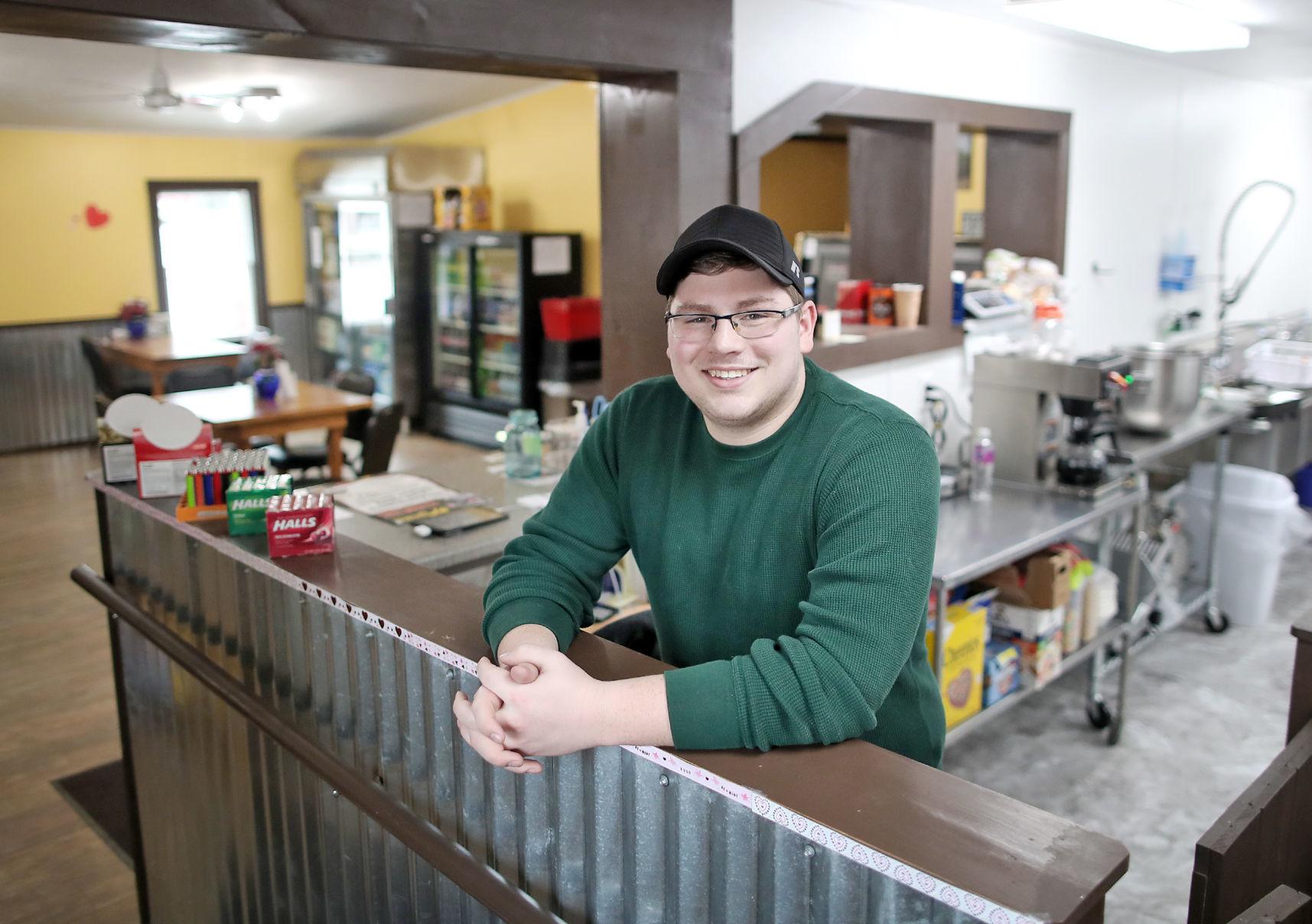 Andrew Linsley and Erik Thomson, not pictured, are co-owners of the recently reopened Fulton Store. The general store in the town of Fulton sells a variety of items, ranging from staple foods to meals and baked goods made from scratch.

Co-owner Andrew Linsley took over the store this summer and reopened in October with business partner and co-owner Erik Thompson. The two said they wanted to offer another small-town meeting place for the community.

The store has been a house and general store since its construction in the late 1800s. It was closed for a while before Linsley and Thompson took over, but the previous owners helped teach them the business.

Linsley said he and Thompson are happy to be in Fulton.

“Fulton is a very close community. It’s almost like its own city,” he said.

Their original idea was to open a beef jerky outlet, but the men learned that jerky production would be a complicated undertaking, so they decided to reopen the Fulton Store.

The men have tweaked the menu and now offer a few more options for customers. 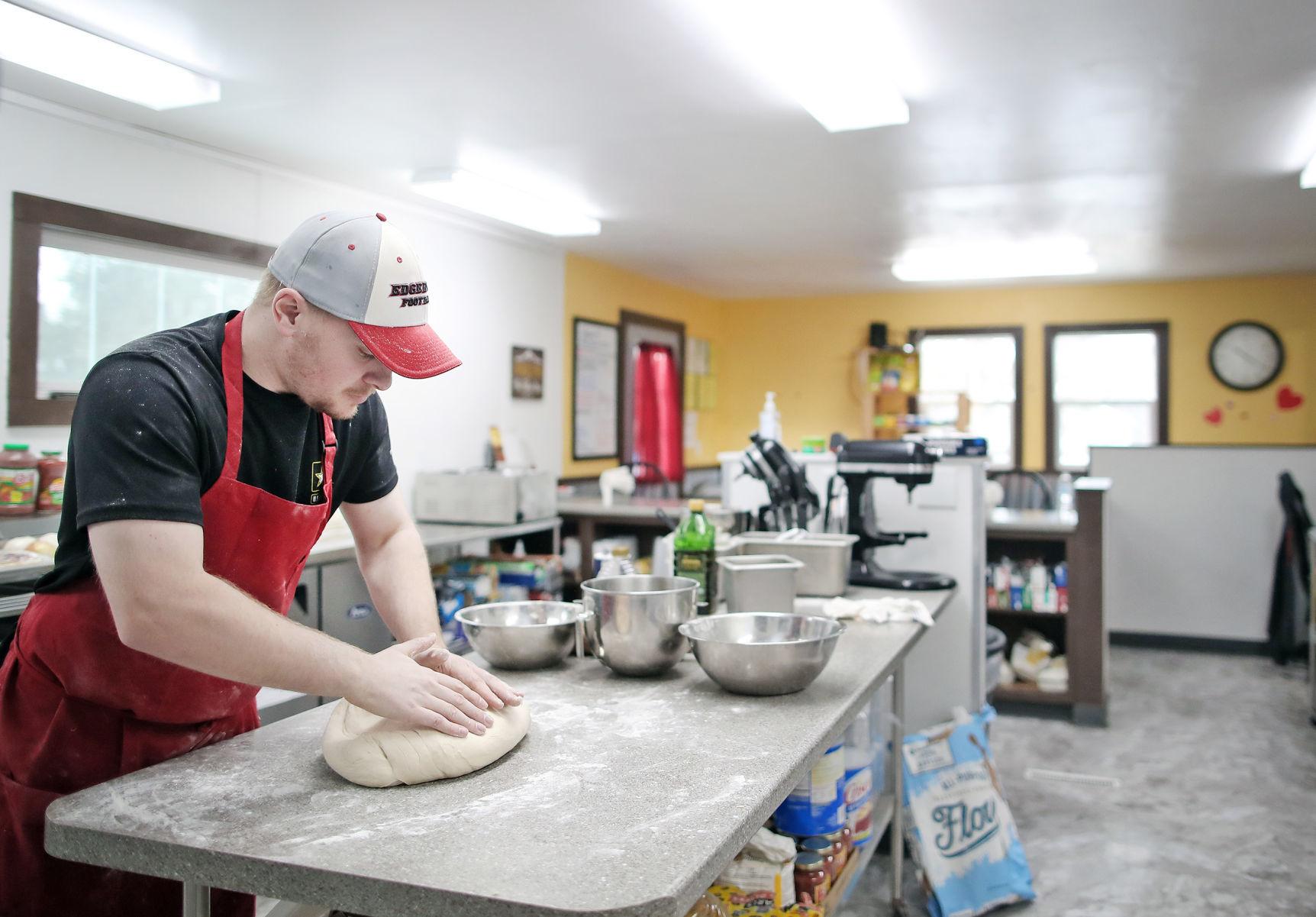 Tyler Richardson rolls out a fresh batch of pizza dough while working inside the Fulton Store's kitchen Tuesday morning. The store sells a range of homemade food items, from the typical diner breakfast to handmade pizzas and pastries.

“The difference is mostly the variety with the rolls. We’ve been doing a roll of the month, and the menu is a little different. We bring our own flair to some of the stuff,” Linsley said.

Plenty of residents have thanked them for reopening, and the store often sells out of pizzas and sometimes cinnamon rolls.

Resident Jim Orr lives just 4 miles from the Fulton Store and had breakfast there for the first time Sunday.

“I enjoyed it,” he said. “It was great, and the sausage is fantastic.”

Orr liked the meal so much he came back Tuesday for a cinnamon roll.

“It’s close, and the food is really good. That’s the main reason we stopped,” he said.

Kitchen manager and head cook Tyler Richardson went to college to become a pastry chef and baker, but for the last five years, he has worked outside the kitchen. When the opportunity to work at the Fulton Store presented itself, he couldn’t say no.

“I think it’s going pretty well,” he said of the store. “There’s been some ups and downs and figuring out some things, but I think overall we’re doing pretty well.”

A chalkboard inside the Fulton Store displays the cost of the cinnamon rolls made in-house by head cook Tyler Richardson.

As for crafting the perfect cinnamon roll, cookie or pizza, Richardson said the secret is patience.

“You can’t rush anything in baking. It’s a science,” he said.

Adjustments likely will be made, and beef jerky eventually might find its way onto the store shelves. The owners could buy the building if things go well. In the meantime, they plan to enjoy doing what they’re doing.

“We’re open, and our food tastes great,” Linsley said. “We want everyone to be able to enjoy it.” 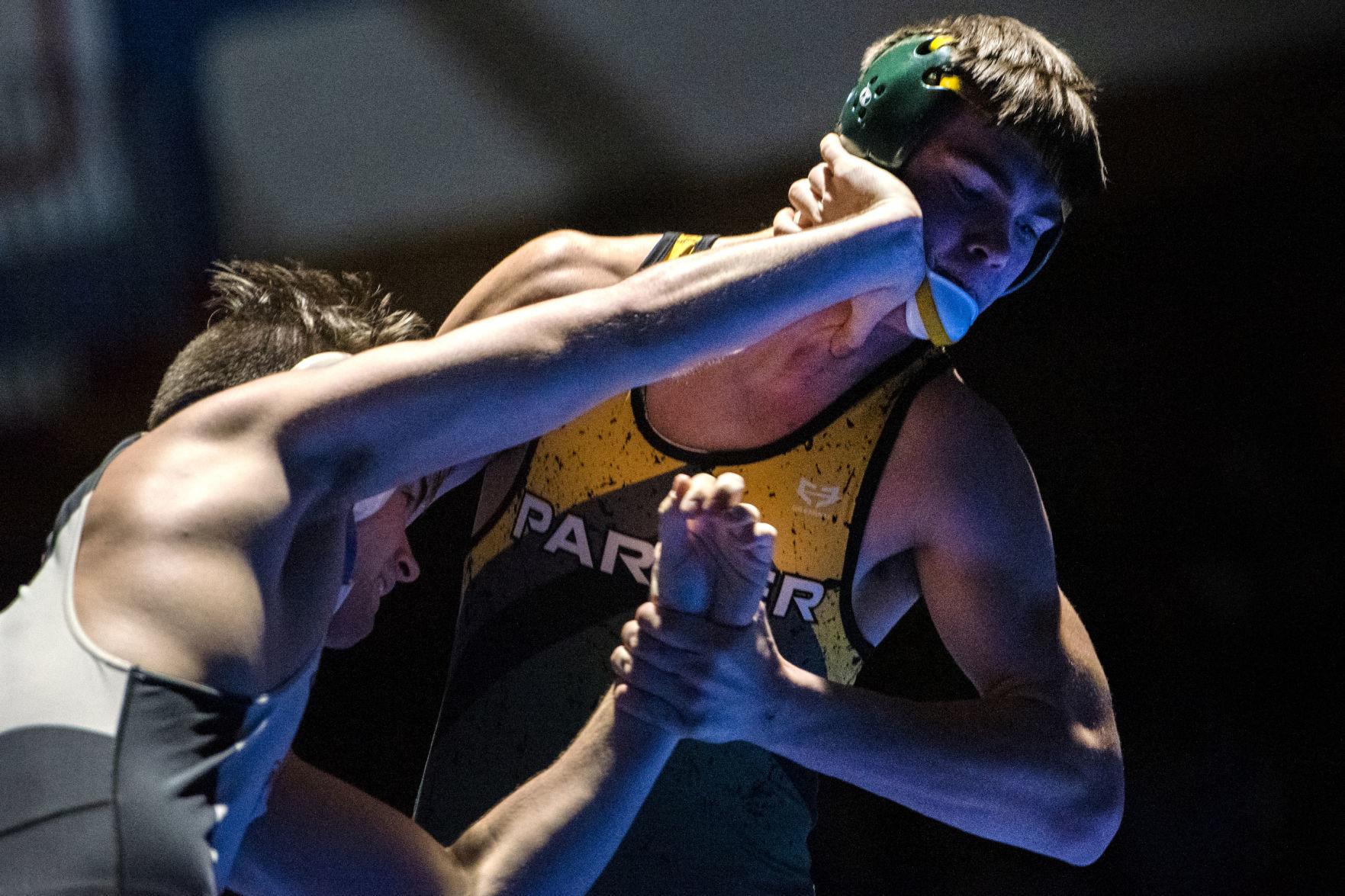 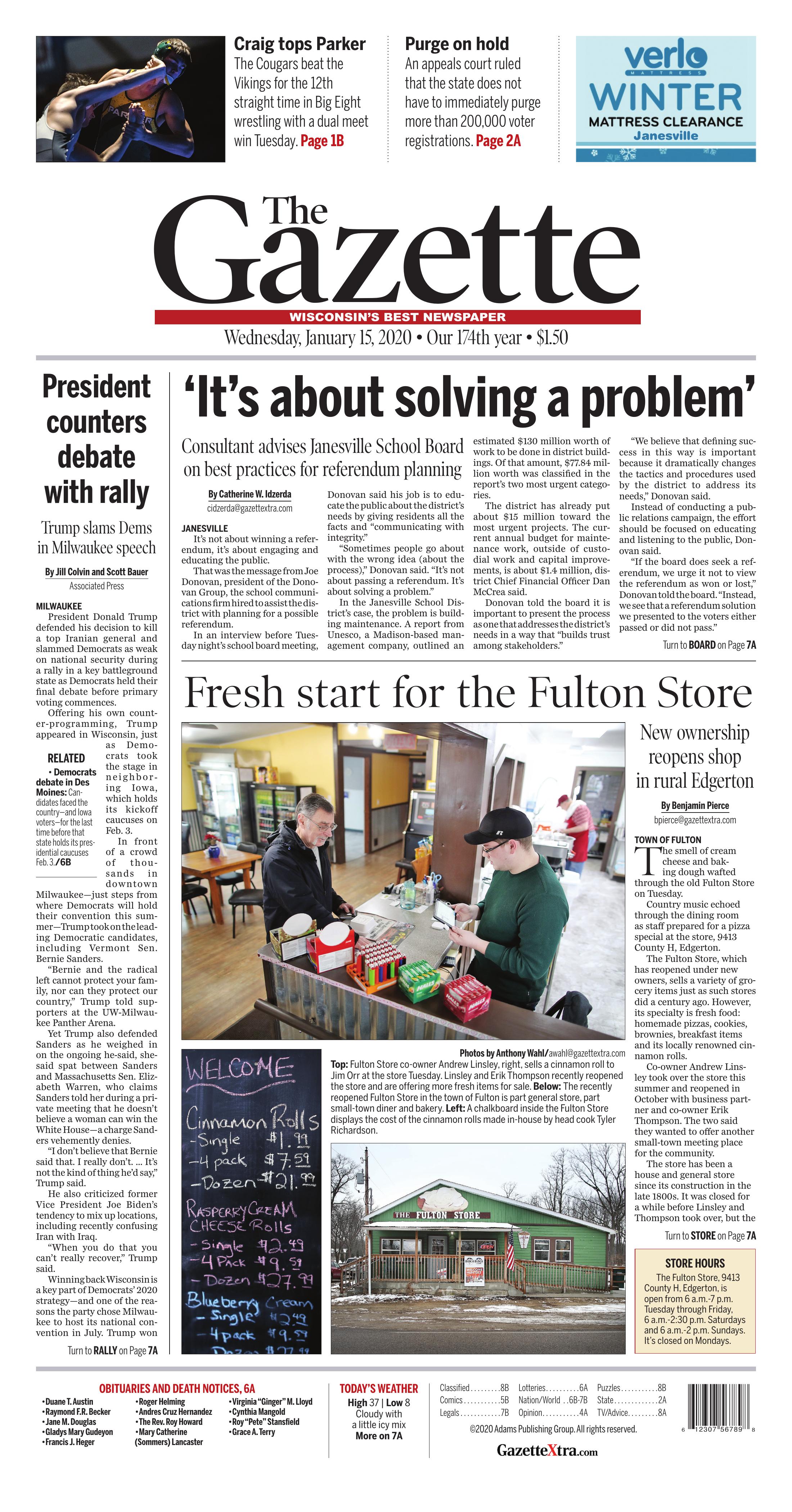